The top 35 parks in Toronto by neighbourhood

Parks in Toronto offer an escape from the city's innumerable skyscrapers and construction zones. Sometimes a little fresh air is all we need, and these green spaces have got you covered.

Here are my picks for the top parks in Toronto by neighbourhood.

Sunnybrook Park has a lot of things going for it. It's massive (154 hectares), has 25 bike trails, a large dog off-leash area, and everything else you could possibly want. Bonus: The park connects to the Toronto Botanical Gardens.

Kew Gardens is the most picturesque of all the parks in the Beaches area. Its perks include plenty of sports facilities in the warmer months and an ice rink in the winter. It's also home to two Beaches landmarks: the Garder's Cottage and the Kew Gardens gazebo.

Head just south of Bloor on Dufferin and you'll come across Dufferin Grove Park. The 5.3 hectare space is home to a mature forest canopy and is equipped with a sports field, a basketball court, picnic areas, and an ice rink.

It goes without saying, but High Park has got it all. The mammoth 400-acre space flaunts lots of running and hiking trails, cherry blossom trees in the spring, gardens, and pretty much everything else under the sun.

If you're looking for bike trails, Canoe Landing Park has five to offer. It also has many walking paths and two multipurpose sports fields. The park also flaunts a few stand-alone art pieces by Douglas Coupland, one of the park's designers, including a massive canoe that allows you to see over the Gardiner to the lake.

The sweeping park by the name of Corktown Common has beautified the once not-so-pretty industrial lands in the Canary District. The park has a marsh, lawns, urban prairies, and one of the most impressive playgrounds in the city. 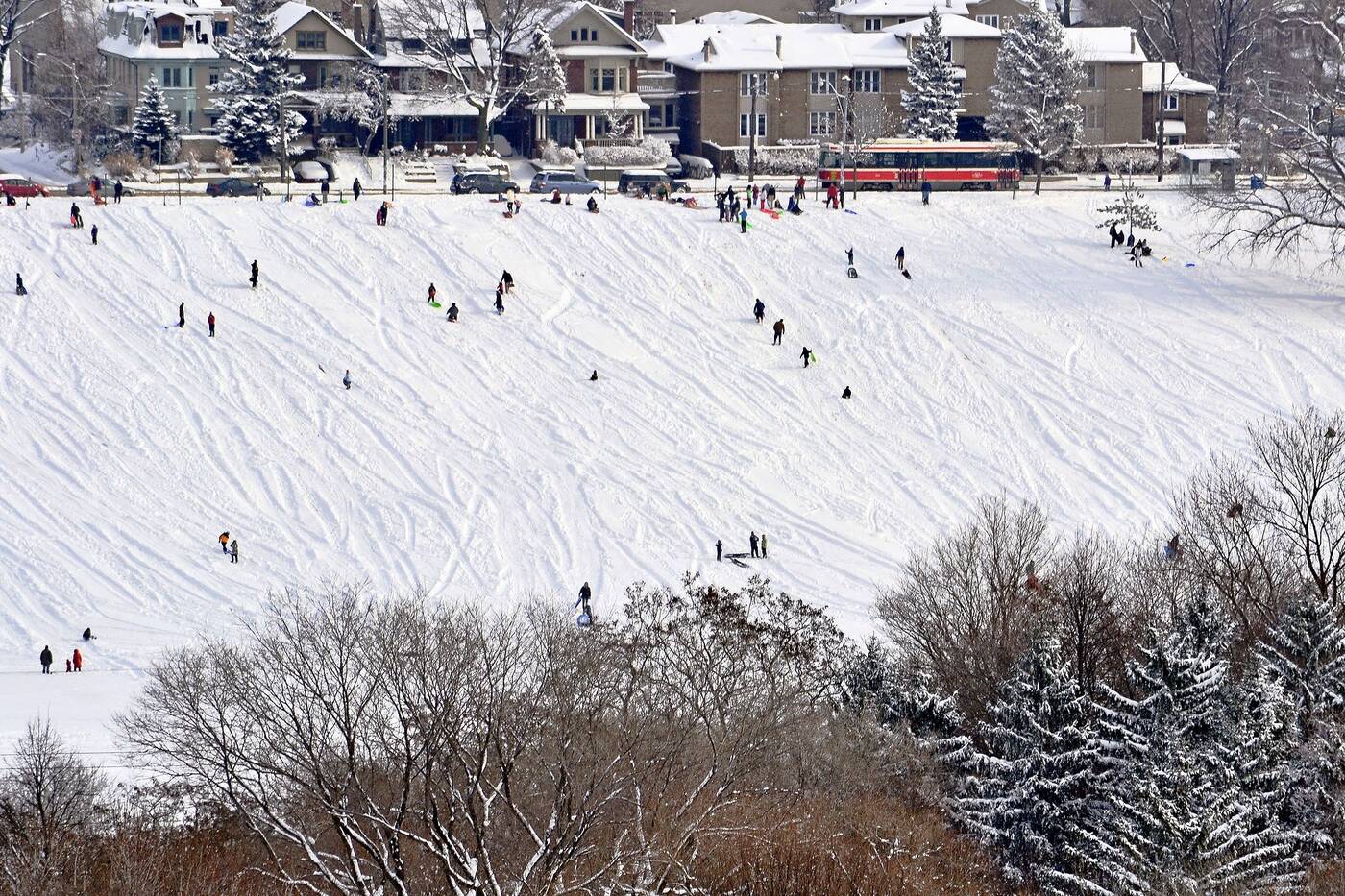 Riverdale Park East has an artificial outdoor ice rink and tobogganing hills in the winter. Photo courtesy of Keith Armstrong.

Earlscourt Park is a 12.6-hectare park that offers a range of amenities. Among the soccer field and multipurpose sports field and track, baseball diamond, four tennis courts, basketball court and volleyball court, there's a dog off-leash area and natural area to enjoy a warm winter day.

Constructed in the early 1900s at the same time that the surrounding community was built, Withrow Park is an eight-hectare park with all the bells and whistles. You'll find multiple different sports facilities, a dog park, a playground and an ice rink.

Riverdale Park East is a great spot to visit all year round due to its unforgettable view of the downtown Toronto skyline. In the winter, there's also an artificial outdoor ice rink and tobogganing hills.

Spanning over 180 acres of lush forest, Taylor Creek Park and ravine is one of the largest natural areas in the city. The multi-use trails through the area feature the babbling riverway Taylor-Massey Creek as it flows toward the Don River and incredible natural beauty. 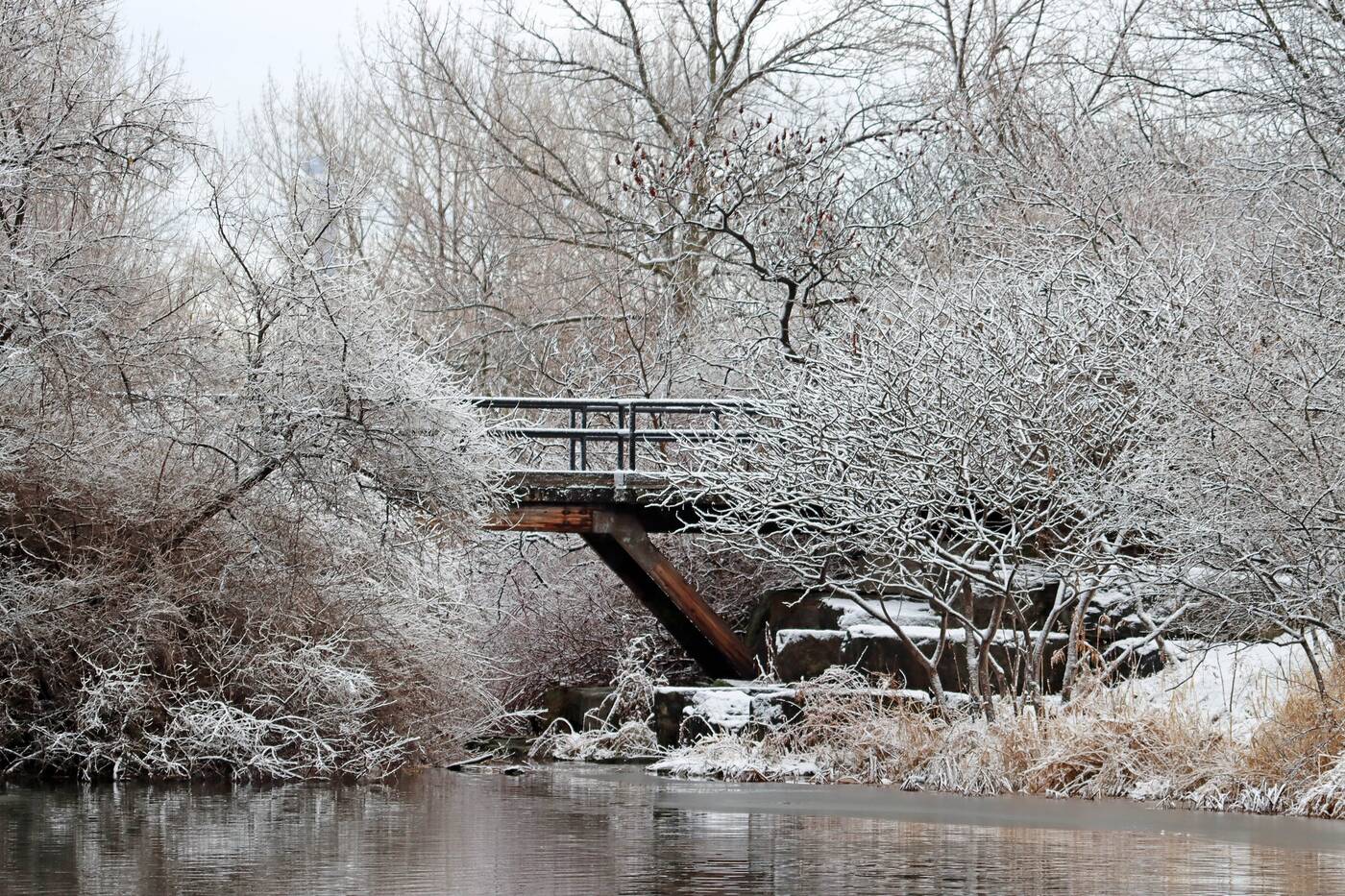 Humber Bay Park is located along the shores of Lake Ontario. Photo courtesy of Photos Murielle.

Located along the shores of Lake Ontario, Humber Bay Park is a must-visit for anyone in search of incredible views of the lake. The area is home to multiple lookout points, a large network of trails, a butterfly habitat, and one of the city's most impressive suspension bridges.

The waterfront green space of Trillium Park offers plenty of views of Toronto's skyline. The Martin Goodman Trail cuts through the area so there are plenty of trails for walking as well as an open-air pavilion situated right next to the water.

Baird Park, located just south of the Junction, may not be the biggest park in the city, but it still offers a decent-sized natural area to enjoy. The area is home to mature trees, an off-leash dog area, a playground, and two bowling lawns in the summer.

Campbell Park is a 1.3 hectare park close to Lansdowne Avenue and Dupont Street. It offers three sports fields and a basketball court that are best enjoyed in the warmer months and an ice rink that pops up in the winter.

St. James Park has always been a beautiful natural space in downtown, but even more so recently now that it has undergone some revamping. The formal gardens and walking trails now also feature an open-air pavilion. 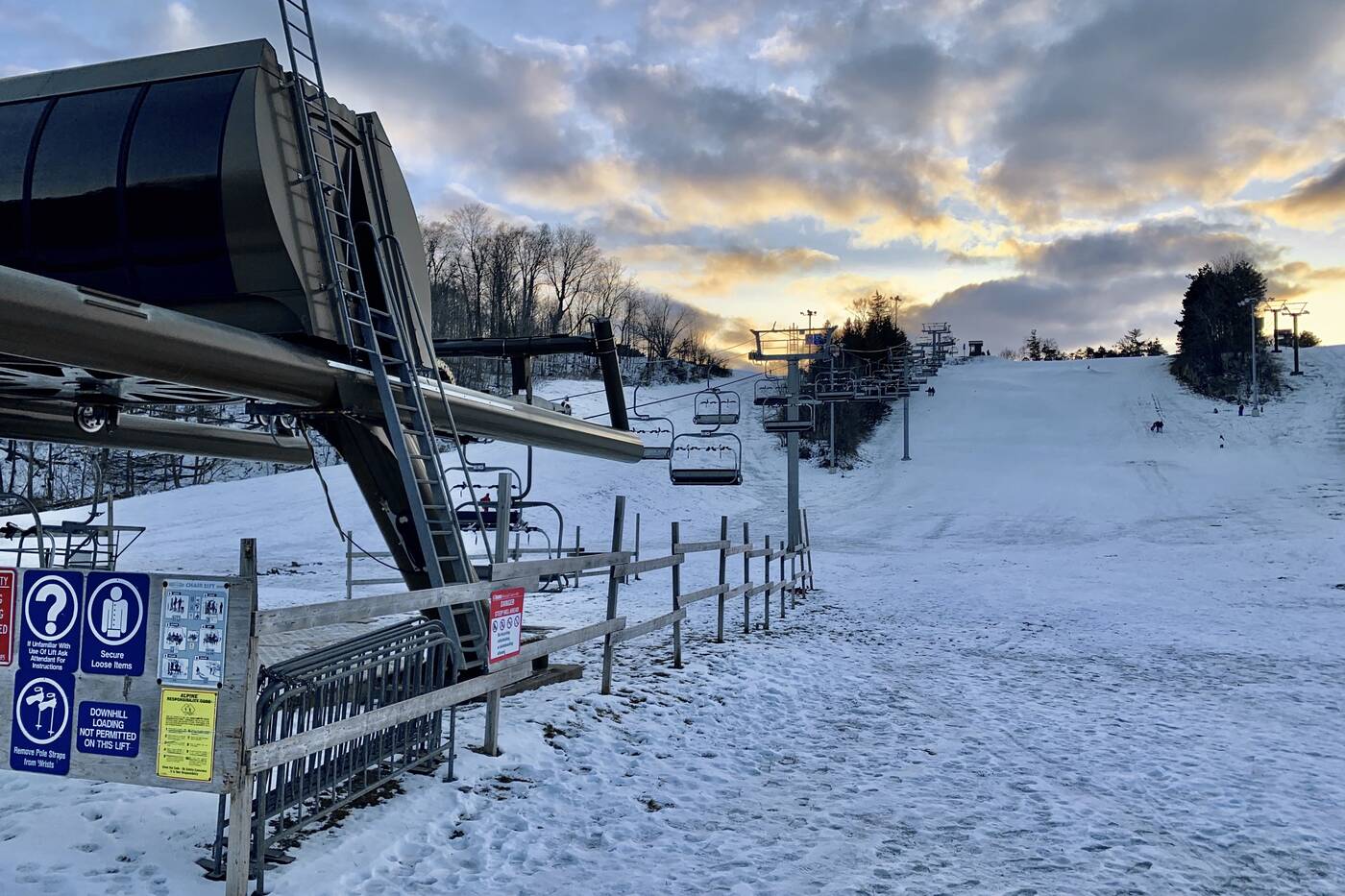 Earl Bales Park is home to one of only two ski hills in the city. Photo courtesy of Olivia Little.

Easily accessible from downtown, Stanley Park is a small park that has a stellar off-leash dog area, nice open patches of grass, a playground, basketball court, and table tennis.

Christie Pits Park takes the cake for best park in Koreatown for so many reasons. You can enjoy the artificial ice rink and steep tobogganing hills in the winter while the three baseball diamonds, sports field, basketball and volleyball courts will keep you busy when the weather warms up.

Bellevue Square Park has long been Kensington Market's quintessential hangout spot. The tiny half-hectare area is situated in the middle of one of the city's most unique neighbourhoods and comes with a playground, splash pad in the summer, and a few patches of grass and benches.

The quiet Greenwood Park offers some R&R away from the crowds. There's two baseball diamonds, a sports field, a dog off-leash park, and a playground. The park also has the city's first covered outdoor artificial ice rink and one of the best outdoor pools in the summertime.

Sherwood Park boasts boardwalk hiking trails that double as an off-leash area so that your pooch can freely walk beside you. As you're walking, you'll also be journeying through a 150-year-old forest.

Earl Bales Park is home to one of only two ski hills in the city and even comes with a ski-lift (though keep in mind these will be closed this winter). The 130-acre park also features an outdoor amphitheatre, massive reservoir, and walking trails. 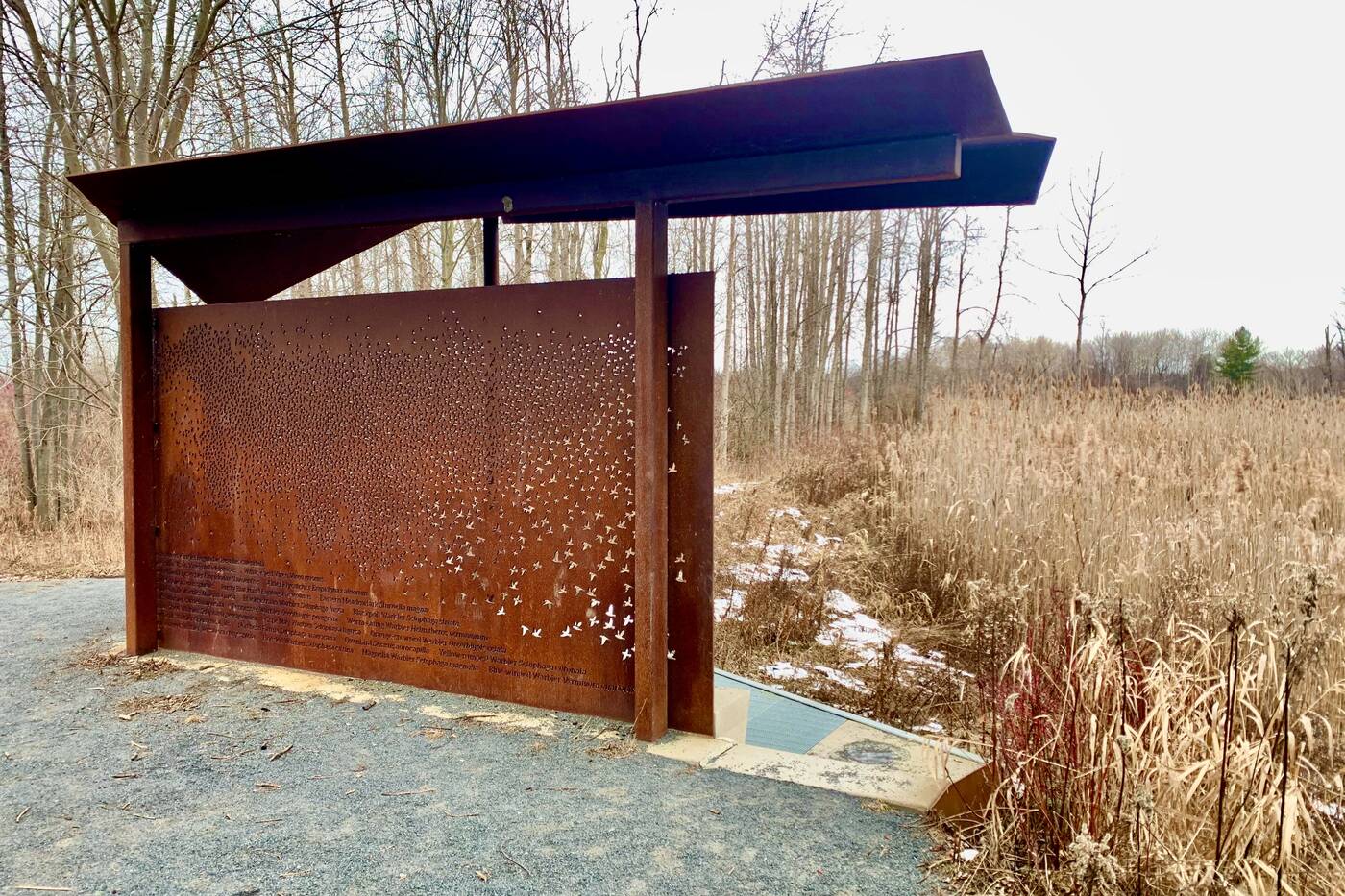 Named after a local Toronto girl who was the first person to swim across Lake Ontario, Marilyn Bell Park is located just west of Ontario Place. The pretty natural area on the water includes a small section of the Martin Goodman Trail and a lookout platform.

Tommy Thompson Park offers a real retreat from city life. Its grounds are filled with wildflower meadows, cottonwood forests, coastal marshes and plenty of critters - so if you're into nature walks, this is the one. It's also got one of the best views of the 6ix you could ask for.

The 1.8-hectare Grange Park is located south of the AGO and beside the OCAD campus. The well-loved area has an off-leash dog area, picnic area, plenty of grassy areas, and a playground that's just as much fun for adults as it is for kids.

Sorauren Park is a favourite of Roncy residents. It is equipped with a baseball diamond, two tennis courts, and an off-leash area for your canine companions.

Ramsden Park has a large dog off-leash area, baseball diamond, and two playgrounds. There is also a large outdoor ice rink, which doubles as a tennis court in the summer.

Coming in at 55 hectares, East Point Park is one of the largest lakeside parks in Toronto. The park is home to views of Lake Ontario, the dramatic cliff faces of the Bluffs, a bird sanctuary, and wide-open meadows of undeveloped land.

Sir Winston Churchill Park is equipped with 10 outdoor tennis courts, a massive dog park, a playground for the kiddies, and a visually impressive reservoir hidden under its lawn. The park also connects to Nordheimer Ravine where you can find an old TTC subway exit with a fascinating backstory. 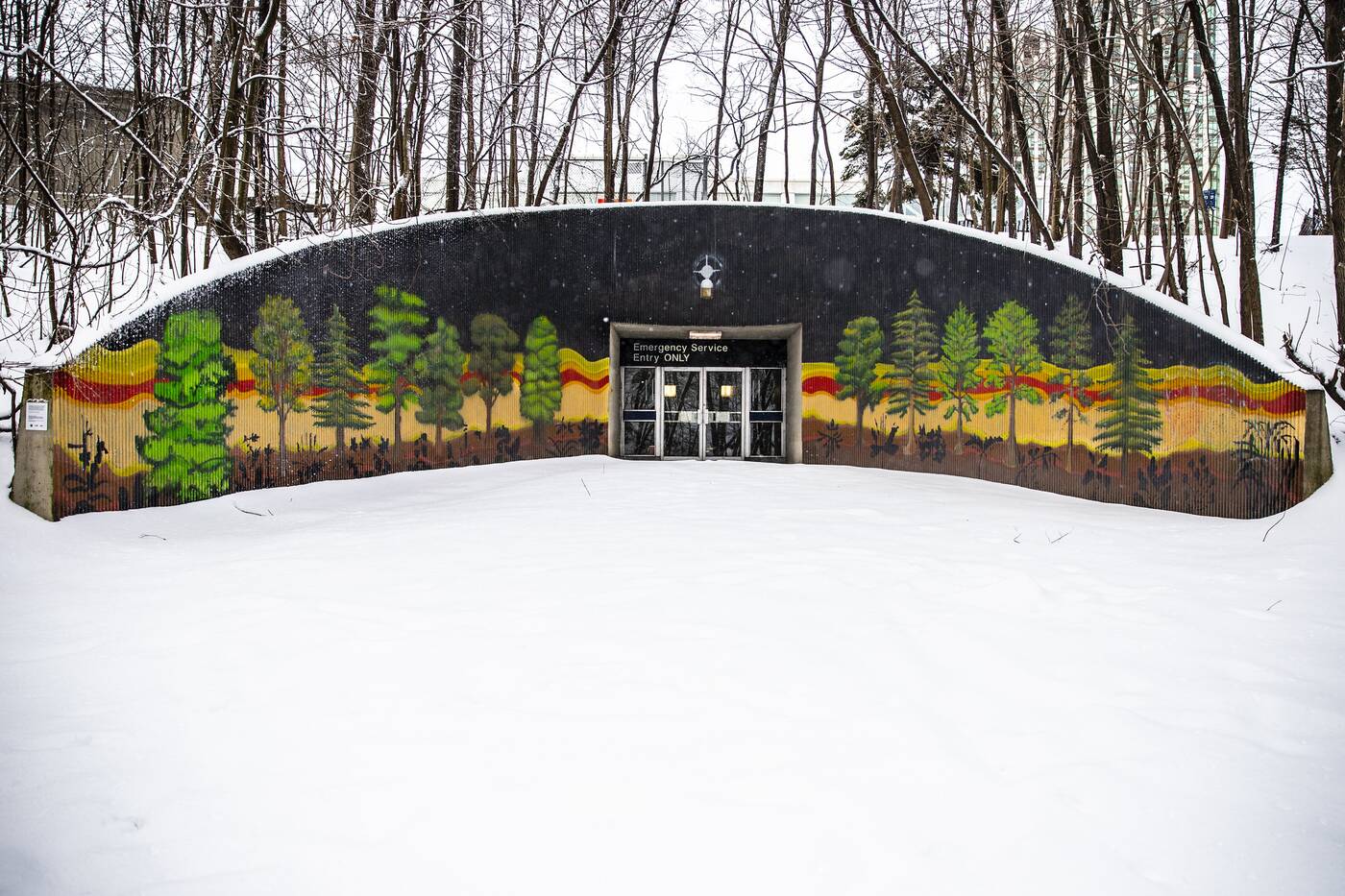 ET Seton Park is located right next to the Ontario Science Centre and is part of a chain of parks in the area forming a forested corridor along the Don River. There are 35 bike trails that you can also hike as well as a year-round free-to-use archery range.

Situated in a residential community near Gerrard and Woodbine, Williamson Park Ravine is an environmentally significant area due its deciduous forest. A long wooden staircase leads you down into the natural area that follows a partially-buried creek.

The pretty oval shape that is Queen's Park is home to a good amount of monuments and statues of important figures. The park grounds are basically an enclave of the University of Toronto, which occupies the surrounding area.

Trinity Bellwoods is the favourite park of pretty much every twenty-something that lives in Toronto. It's also home to three baseball diamonds, eight tennis courts, two volleyball courts, an artificial ice rink, a dog off-leash area, a picnic area, and a children's playground.

David A. Balfour Park features a large open space on a reservoir, a gated garden retreat and a forested ravine system along the Don River. Trails from the park lead down into the ravine and connect to the Kay Gardner Beltline. Some sections of the park will be closed until the spring.

Alexander Muir Memorial Gardens is easily spotted due to its grand decorative gateway entrance located on the east side of Yonge Street. The garden is open year-round and contains formal flower and herb beds, balconies and steps, and wooden archways.