What the stunning new park at Ontario Place looks like

With the official opening of Trillium Park and the William G. Davis Trail at Ontario Place this morning, Toronto has itself a stunning new waterfront green space. This is exciting in general, but doubly so because the Islands are currently out of commission. 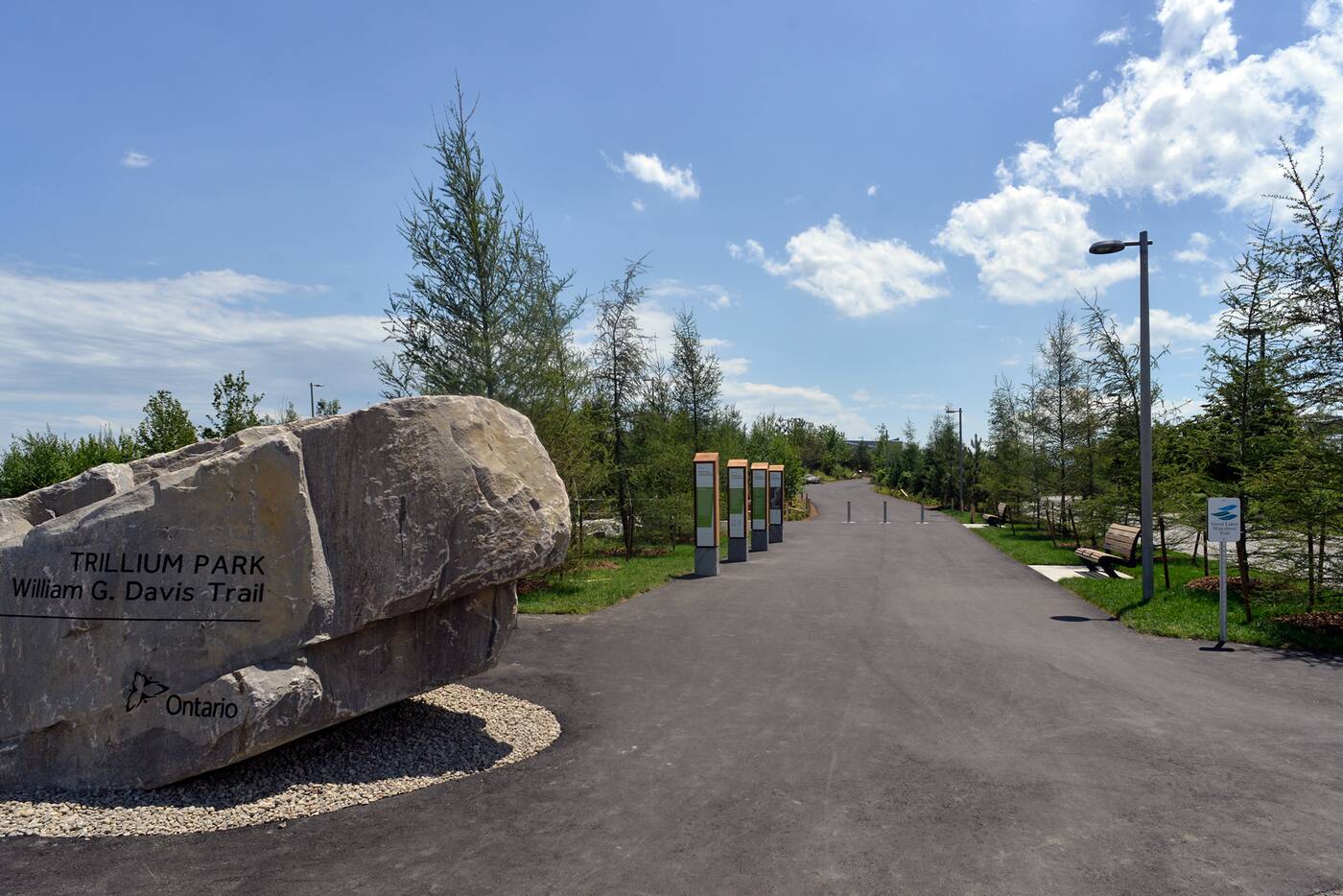 The entrance to Trillium Park and the William G. Davis Trail. Photo by Derek Flack.

It took a long time to bring this park to fruition, but a first visit reveals an impressive design that makes the most of its lakeside location with an undulating topography meant to offer plentiful views of the Toronto skyline. 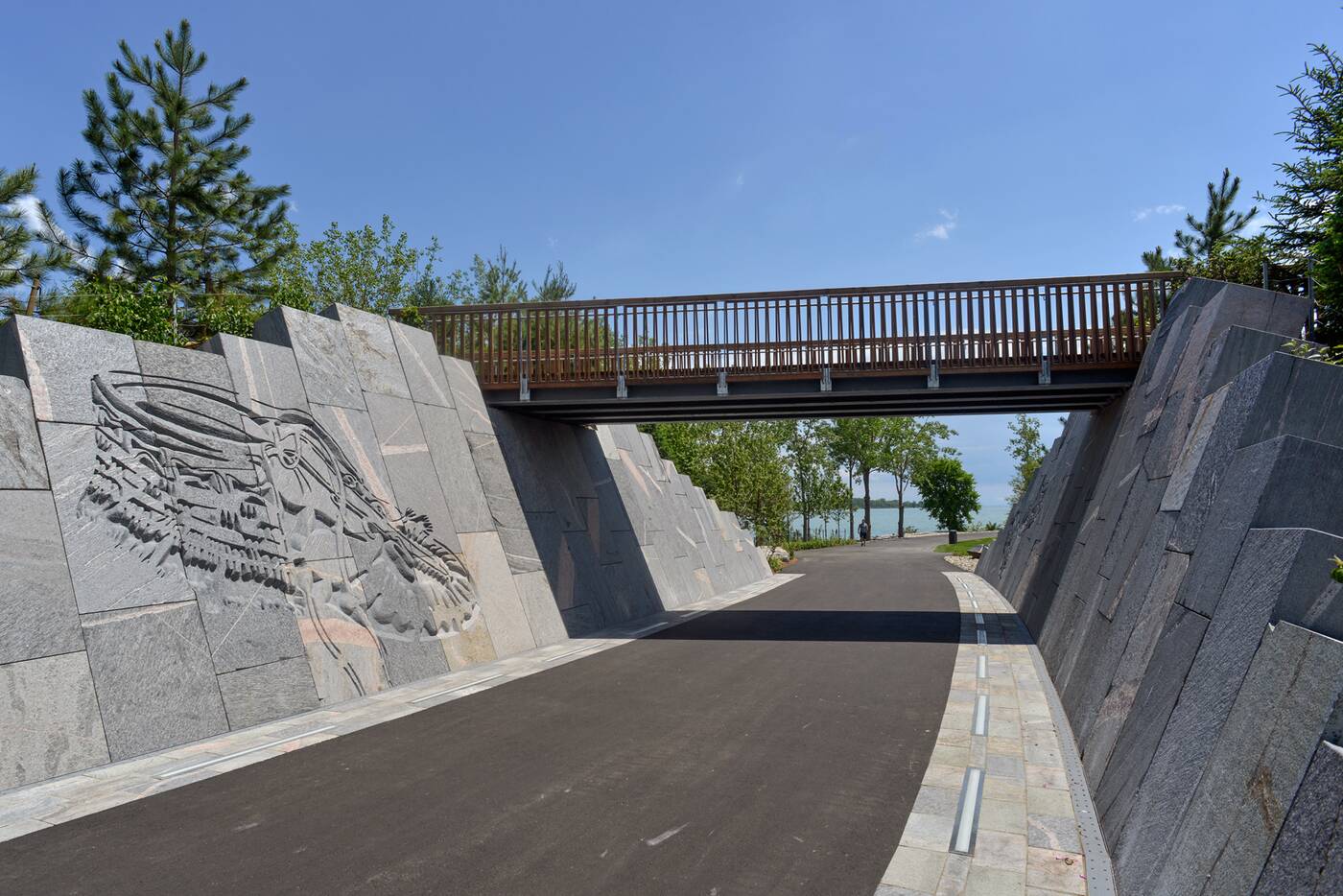 The trail overlaps at this bridge near the entrance. Photo by Derek Flack.

There's no beach here, but it's obvious that there isn't supposed to be. The rocky sections at the water's edge gently dissuade any swimming, which is smart given the general state of water quality near to Toronto's harbour. 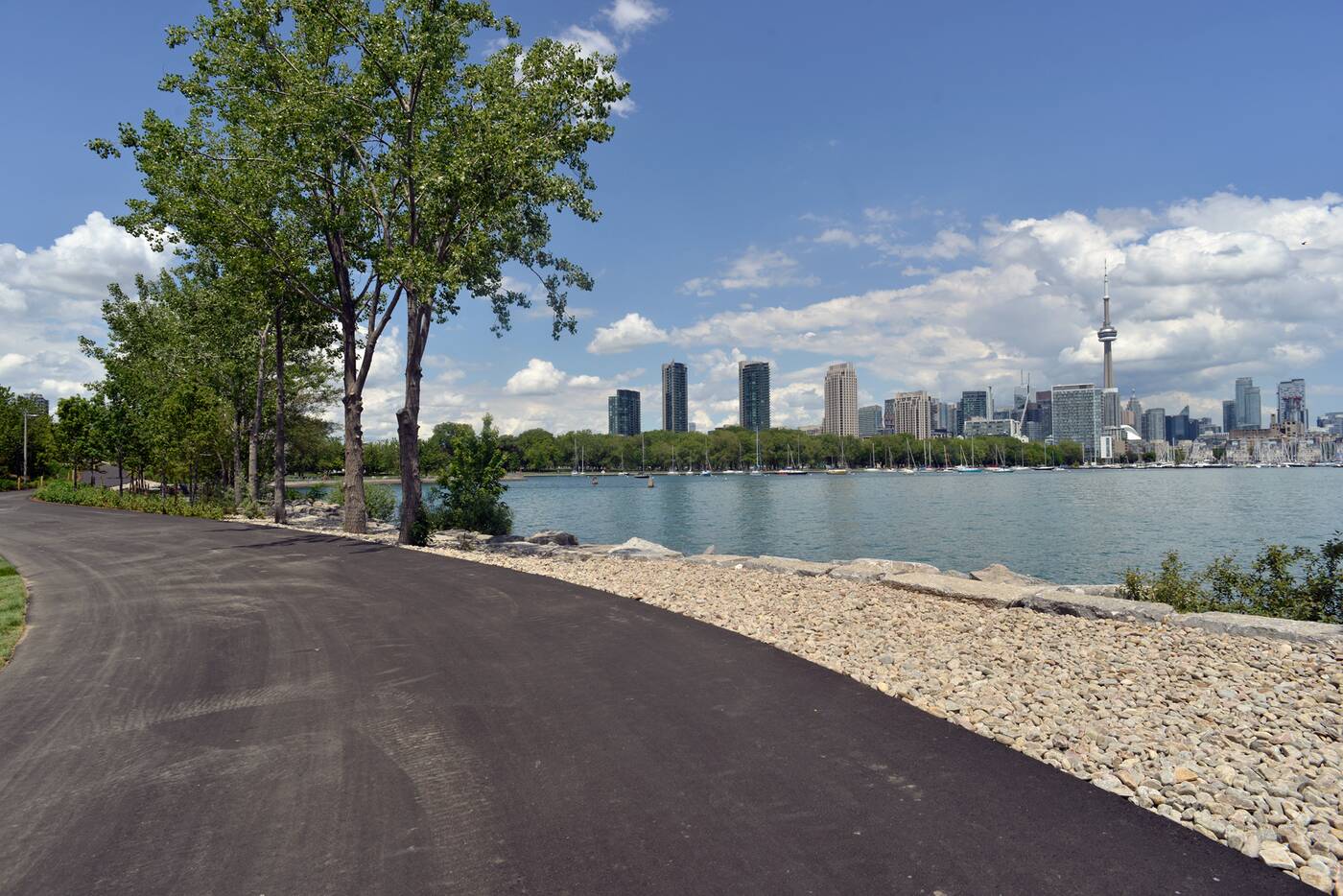 The stunning view of the harbour and skyline from the water's edge trail. Photo by Derek Flack.

While there isn't a ton of shade on offer at present, once the over 1,000 trees start to grow, you can expect this to change. For now, the pavilion offers welcome respite from the sun, while being right next to the water ensures that there's a nice breeze. 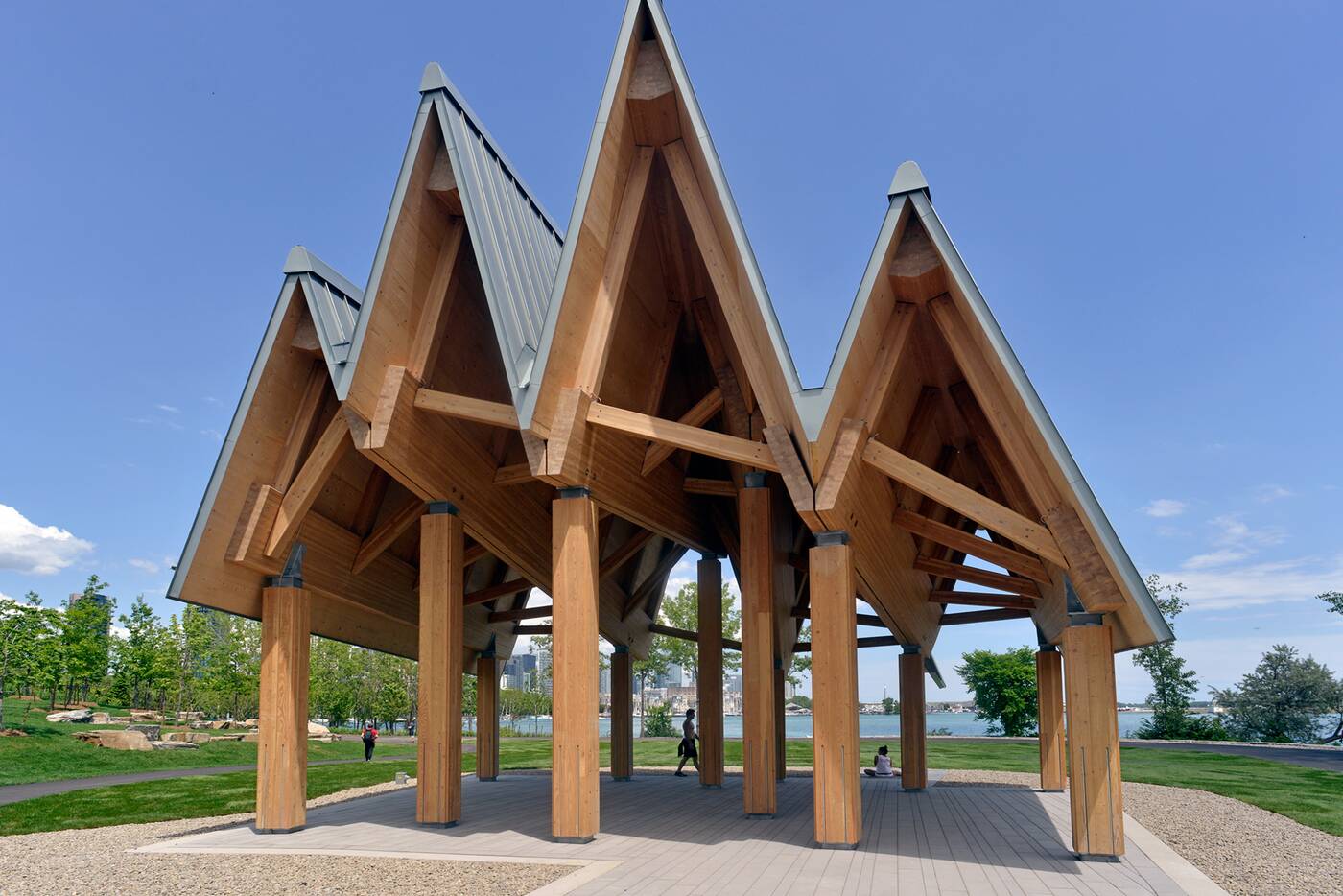 The open air pavilion in all its glory. Photo by Derek Flack.

If there's an ultimate highlight for me, it's the large fire pit. What an amazing way to spend a summer evening in the city, sitting by a fire with a lakeside vista and the skyline just off to the side. More like this, please. 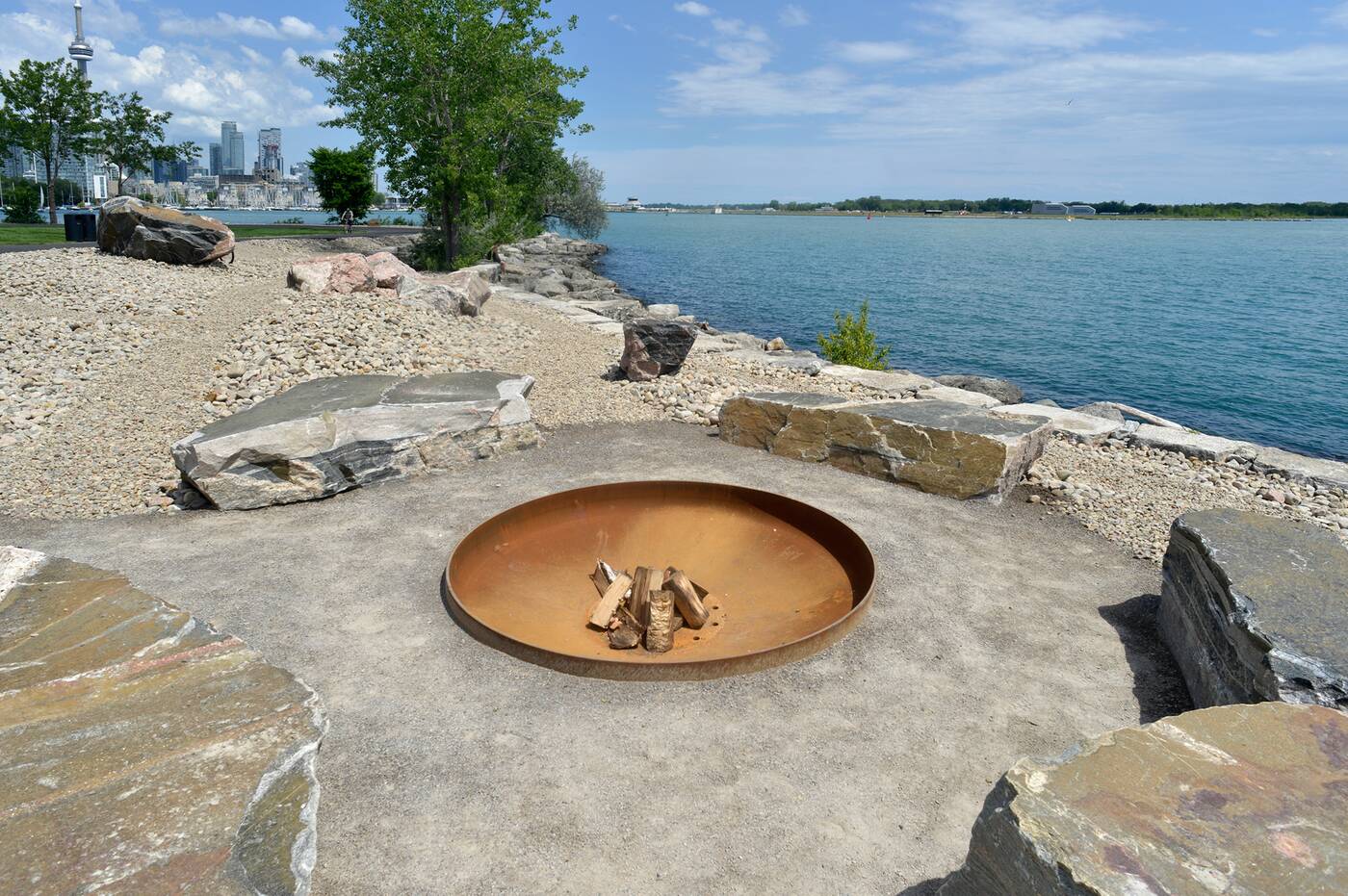 The fire pit is sure to be a popular spot this summer. Photo by Derek Flack.

As much as Trillium Park is a great place to lounge, the William G. Davis Trail will satisfy those looking for a casual walk around the grounds or a diversion from their bike rides along the Martin Goodman Trail. 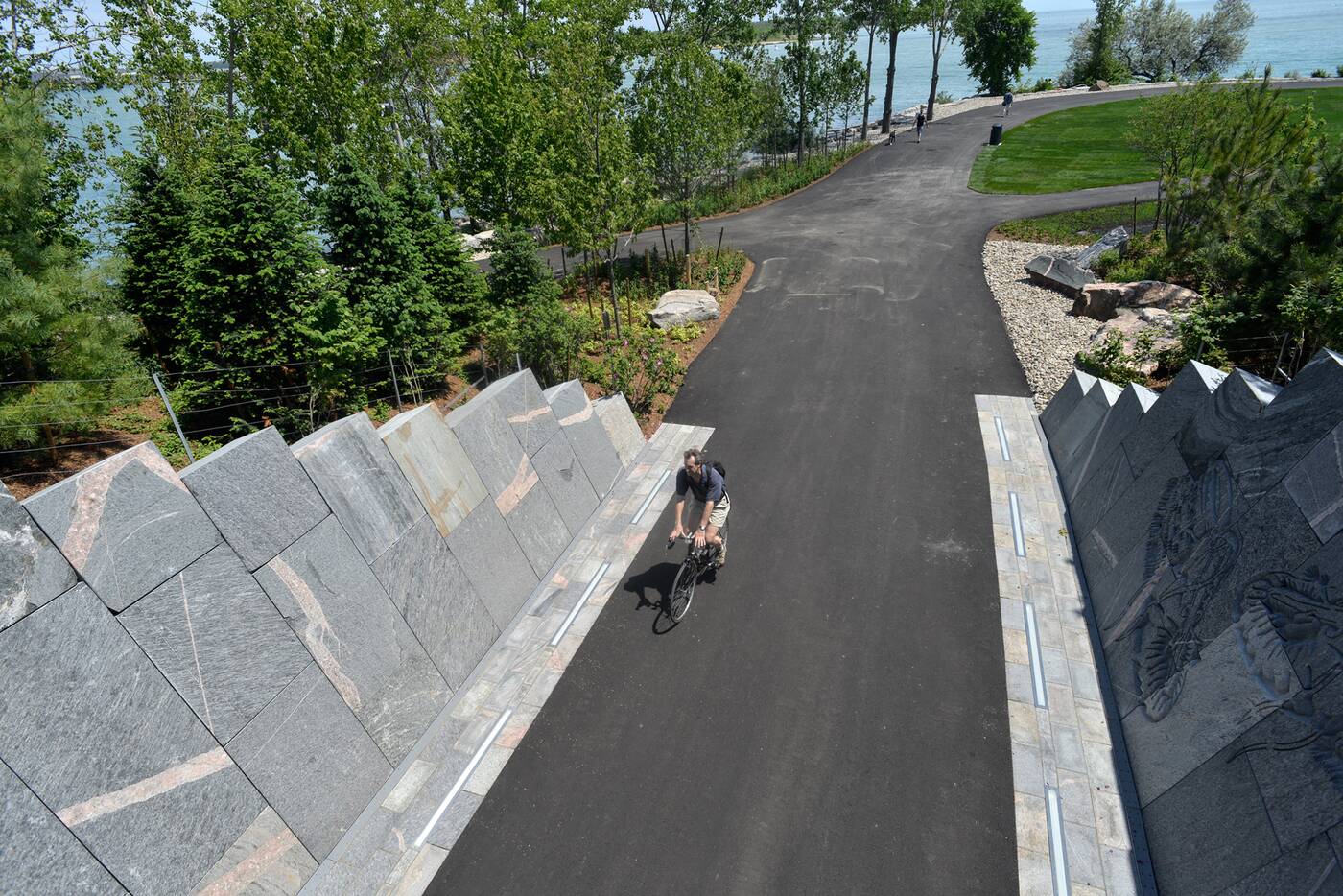 A view of the trail from atop the pedestrian bridge. Photo by Derek Flack.

The trail rises in sections in order to deliver sweeping waterfront views and meanders around just enough to keep things interesting. This will immediately become one of the nicest options for a lakeside walk in the city. 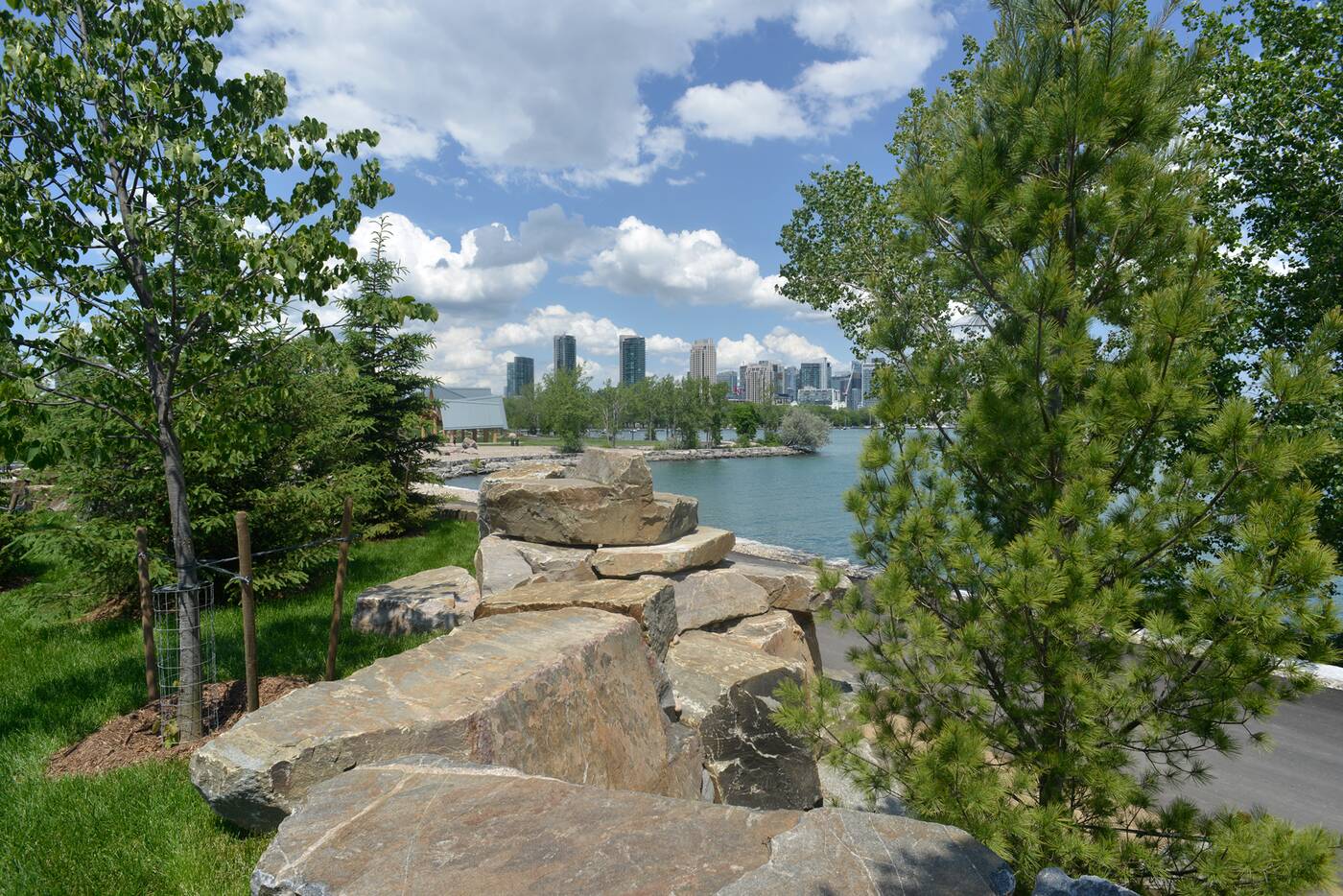 Looking across the top of the granite bluff feature. Photo by Derek Flack.

When I stopped by, the park was wonderfully quiet, but with 7.5 hectares of space, it seems as though it'll be able to handle an influx of people flocking here on weekends without feeling completely crammed. 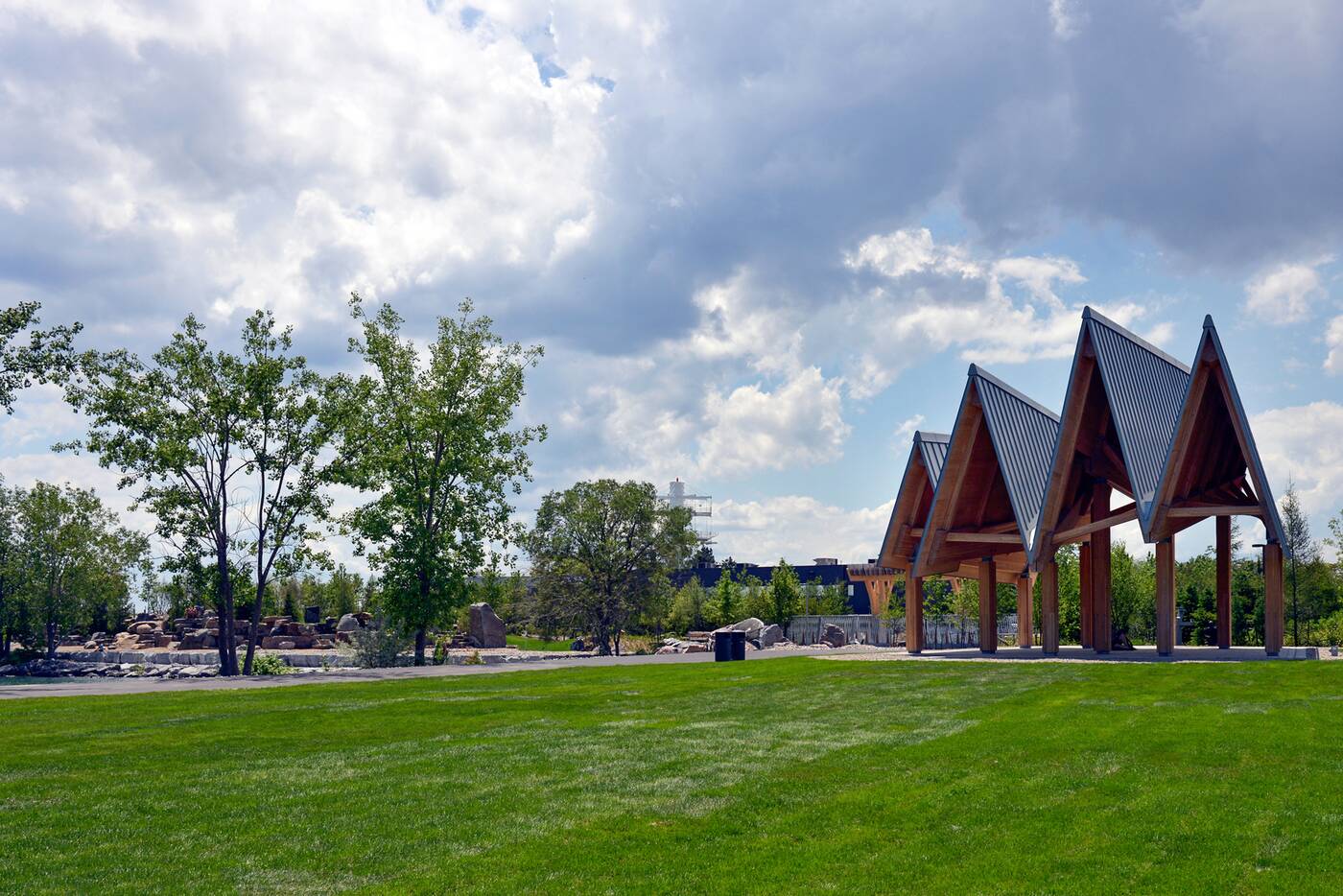 There's quite a few grassy areas in this park, including this one in front of the pavilion. Photo by Derek Flack.

From the many benches to the strategically placed granite formations to the grassy mounds, there's plenty of places to sit for a while. For now, the park will be at its best when the sun is low on the horizon, but you could do a picnic here if you're not averse to a little glare. 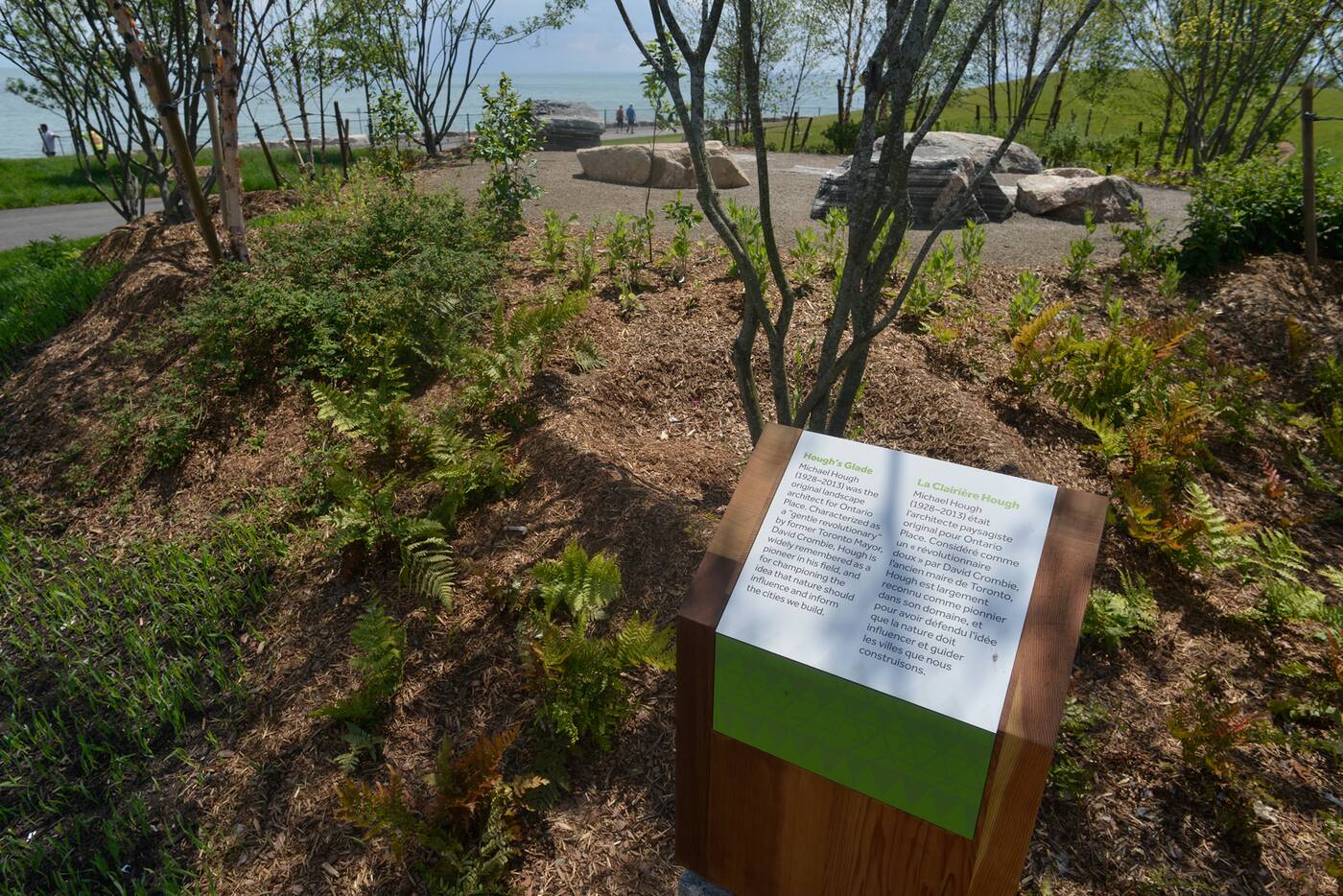 One of the quieter spots to escape the bustle of city life. Photo by Derek Flack.

Or, if you just want to cultivate some time away from everything, there are a few little nooks here designed to offer a bit of solitude, including Hough's Glade, which is named after the original landscape architect at Ontario Place. 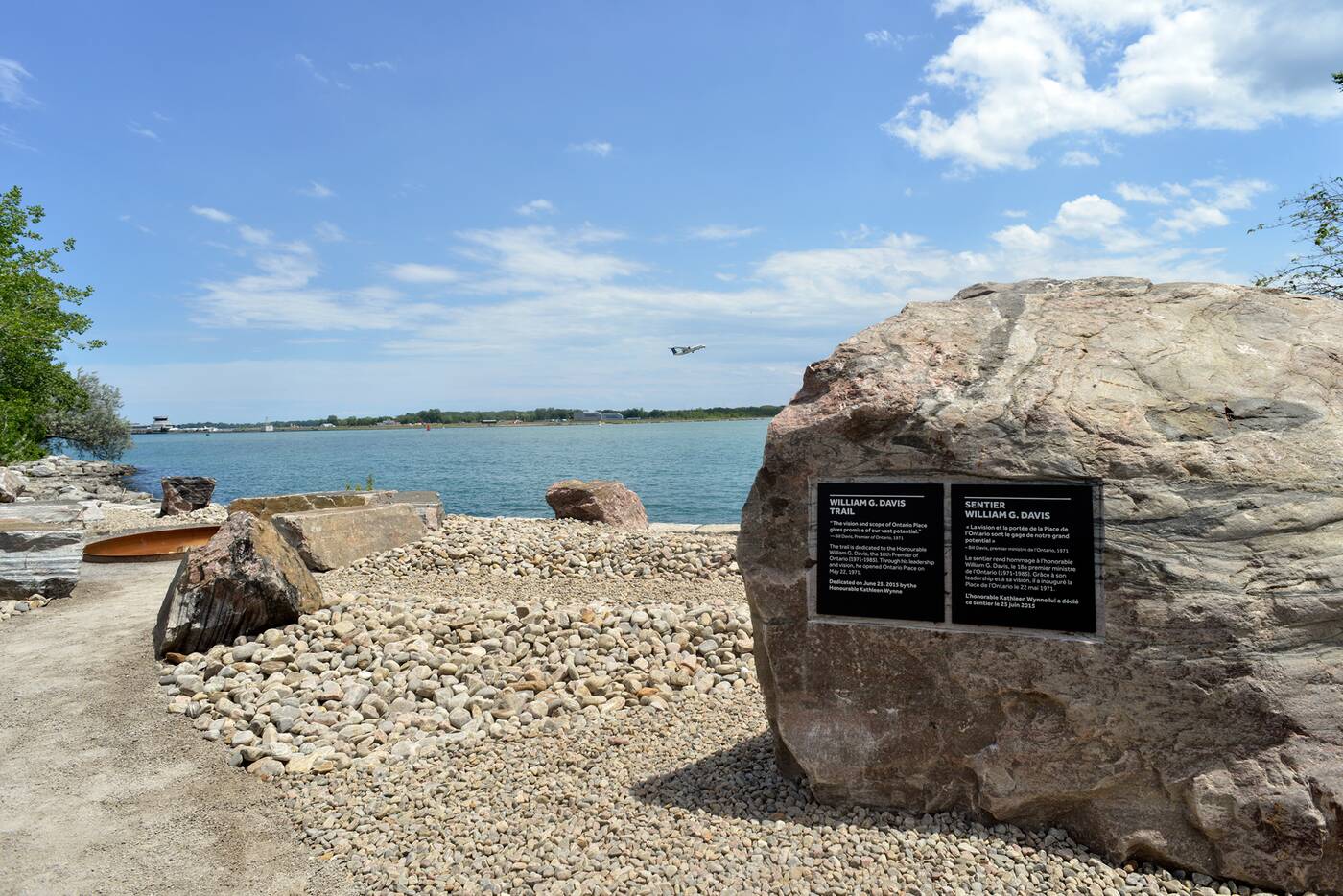 Air traffic from Billy Bishop is a regular presence. Photo by Derek Flack.

The one element of the park that I suspect will be subject to mixed opinions is the proximity of the Toronto Island Airport. Plane-spotters will love the ability to watch the action on the tarmac from the park, but many will find the planes too noisy at times. 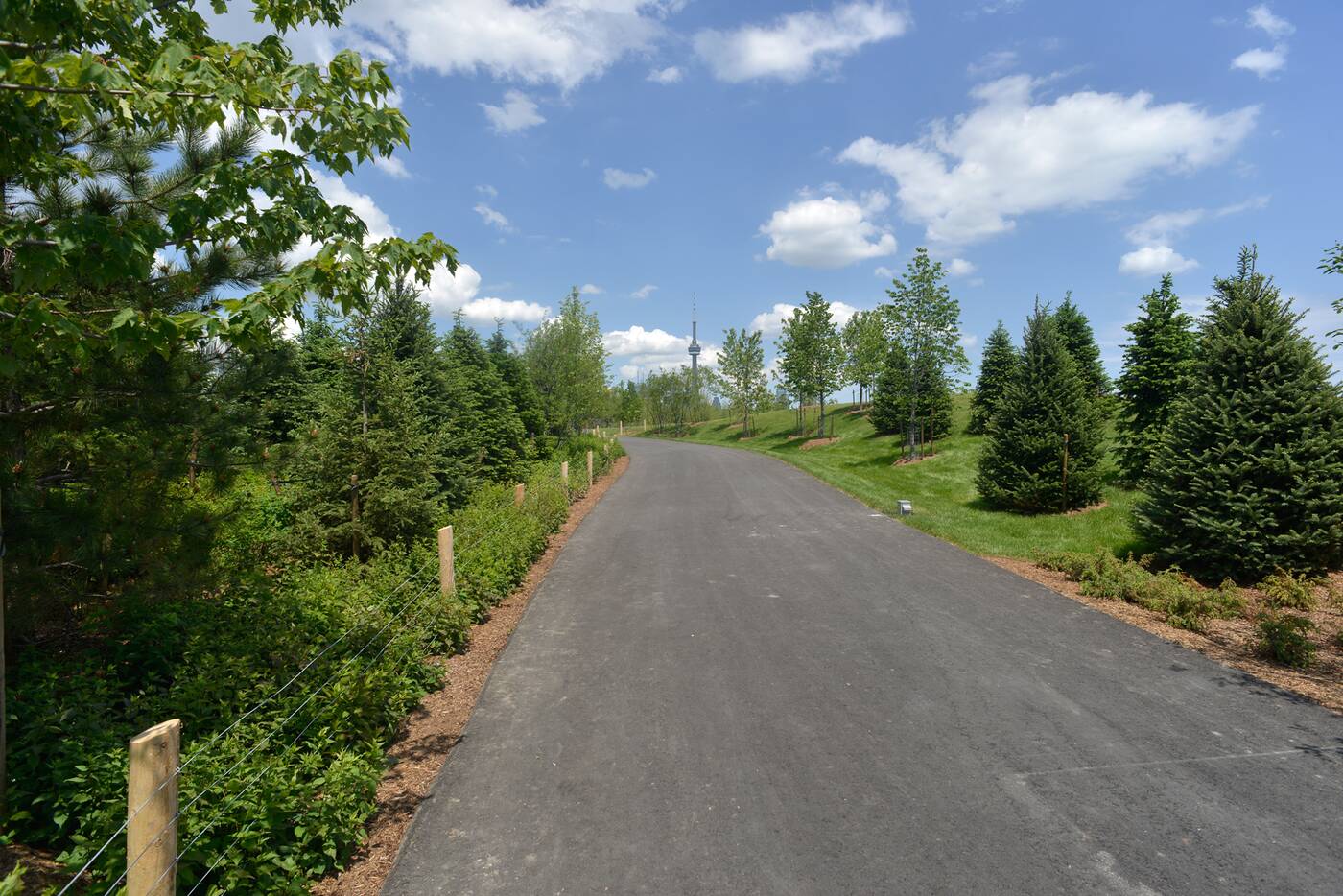 Heading towards the upper portion of the trail. Photo by Derek Flack.

Concerts at nearby Echo Beach will probably also spill over, but that might be a good thing. In any case, let's not complain too much. This used to be dreary parking lot, which was an utter waste of space that's now been remedied. 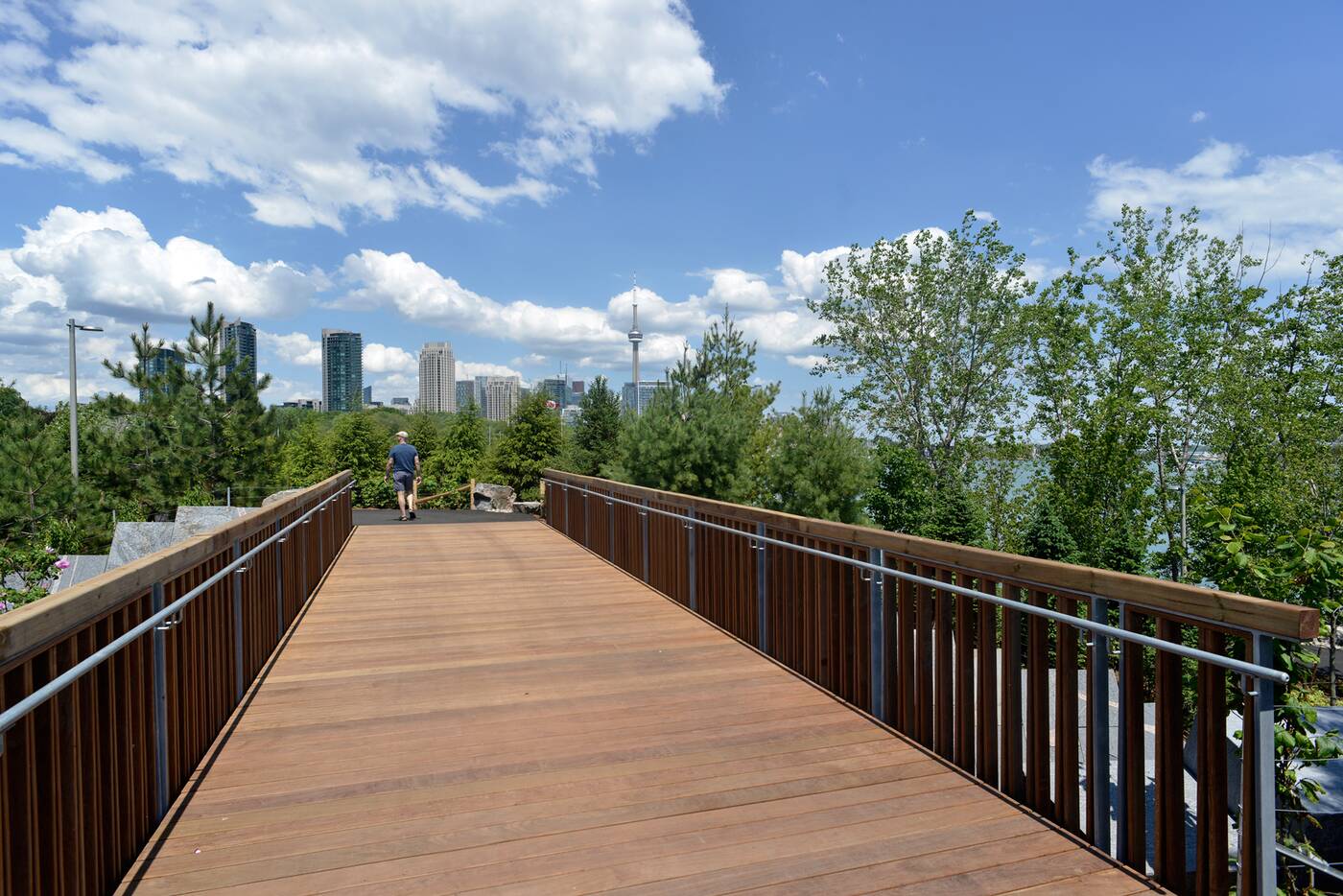 The CN Tower and skyline visible from much of the park. Photo by Derek Flack.

There's still a bit of work being done at the south end of the waterfront trail, which has resulted in a temporary fence going up, but everywhere else the park appears well finished and ready to take on visitors looking for a natural retreat near the heart of the city. 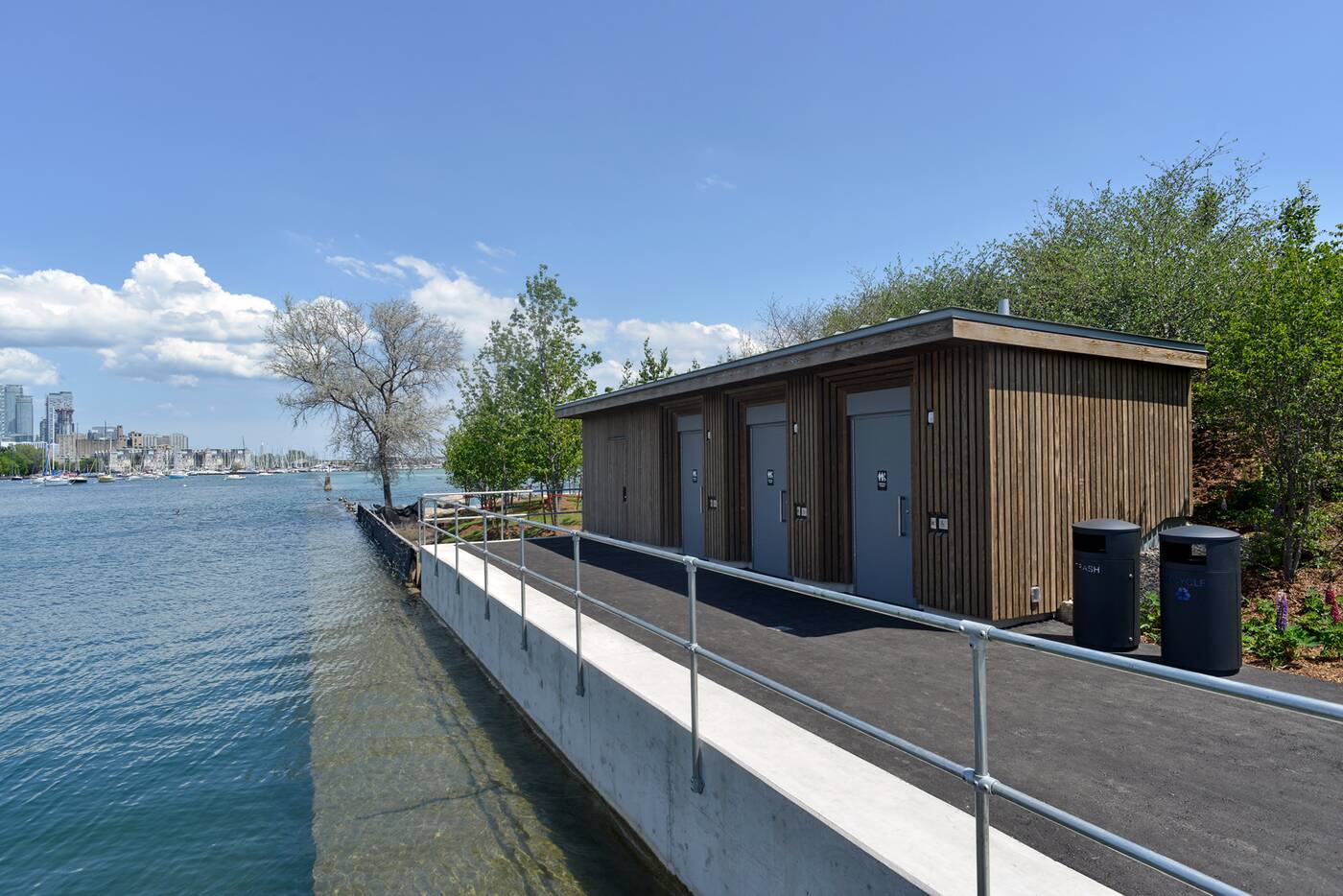 To get to the new park, just head south from the intersection of Lake Shore Boulevard West and Ontario Place Boulevard. The entrance is marked with a number kiosks, but the public washrooms are also an obvious marker to look for.