East Point Park spans over 55 hectares along the city's east waterfront making it one of the largest lakeside parks in Toronto.

Home to breathtaking views of Lake Ontario, the dramatic cliff faces of the Scarborough Bluffs, a bird sanctuary and wide-open meadows of undeveloped land, East Point is nothing short of a natural gem. 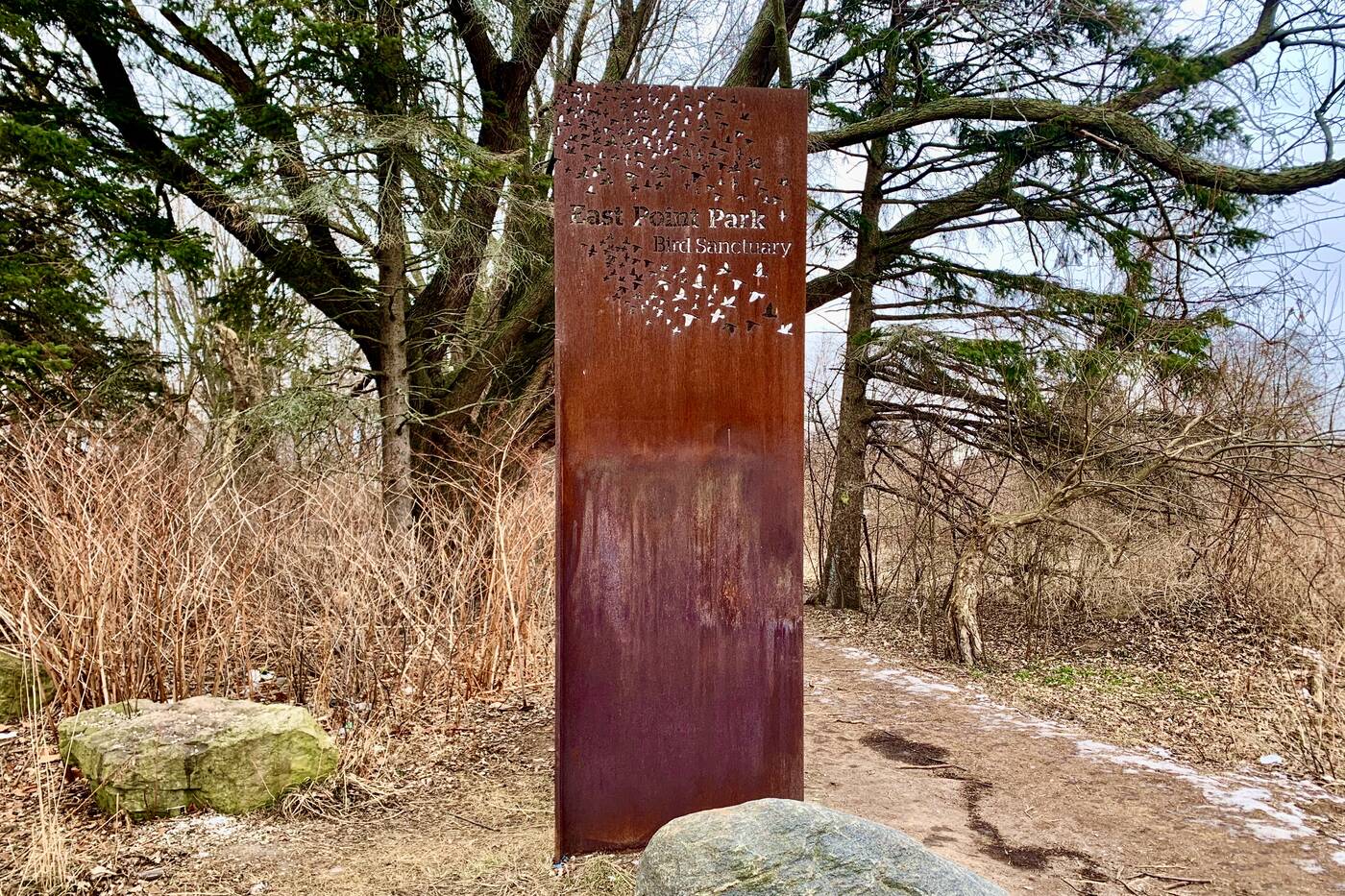 You can access the trails at both the west and east ends of the park. You'll find this steel structure at both entrances.

There are access points to the trails at both the western and eastern ends of the park with a large parking lot located at the eastern entrance just south of the train tracks. 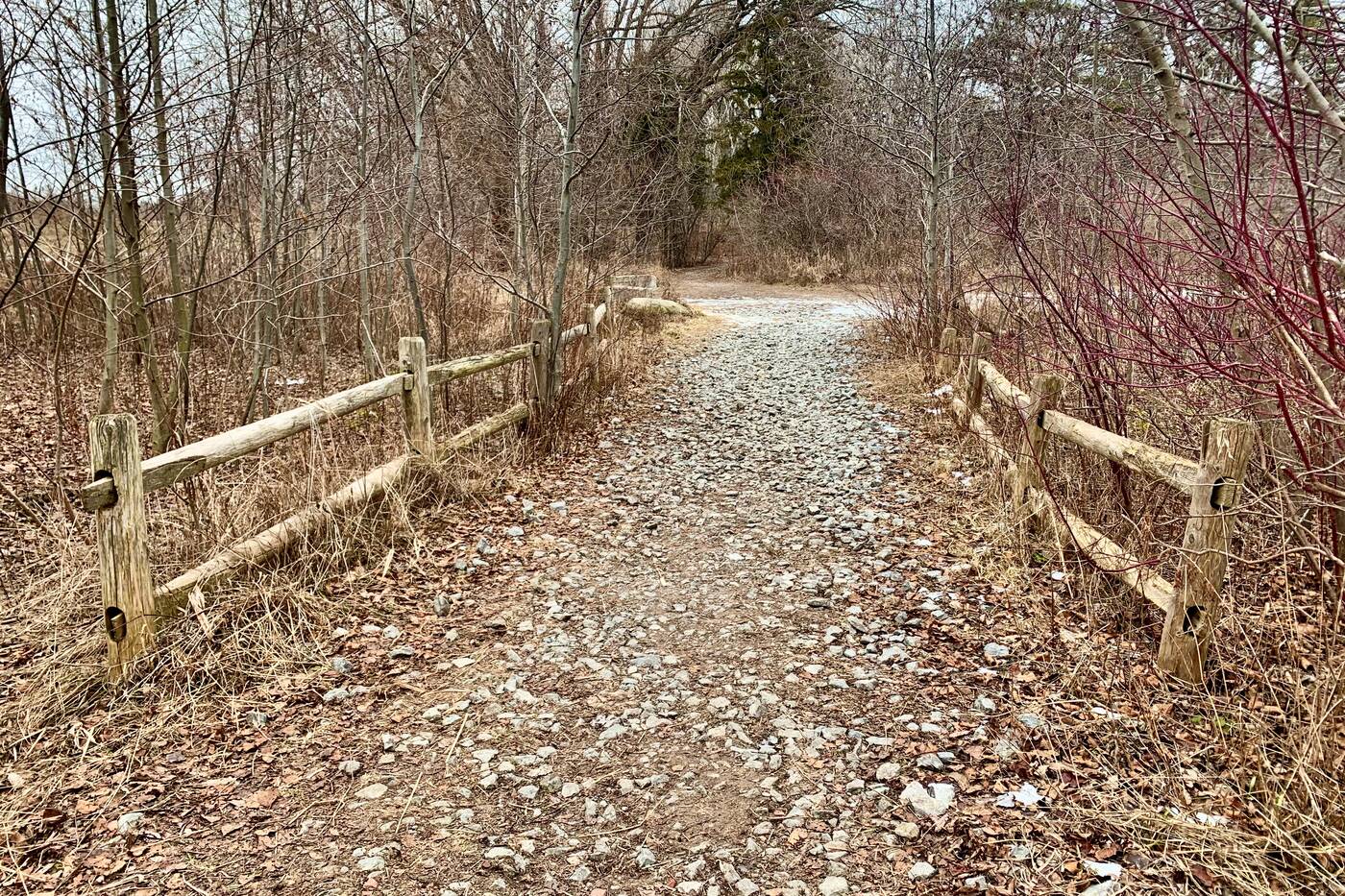 The trails lead through a range of different landscapes including forest, wetland, beach and bluffs.

The trails head south toward the water and then the fenced-in pathway runs safely alongside it. 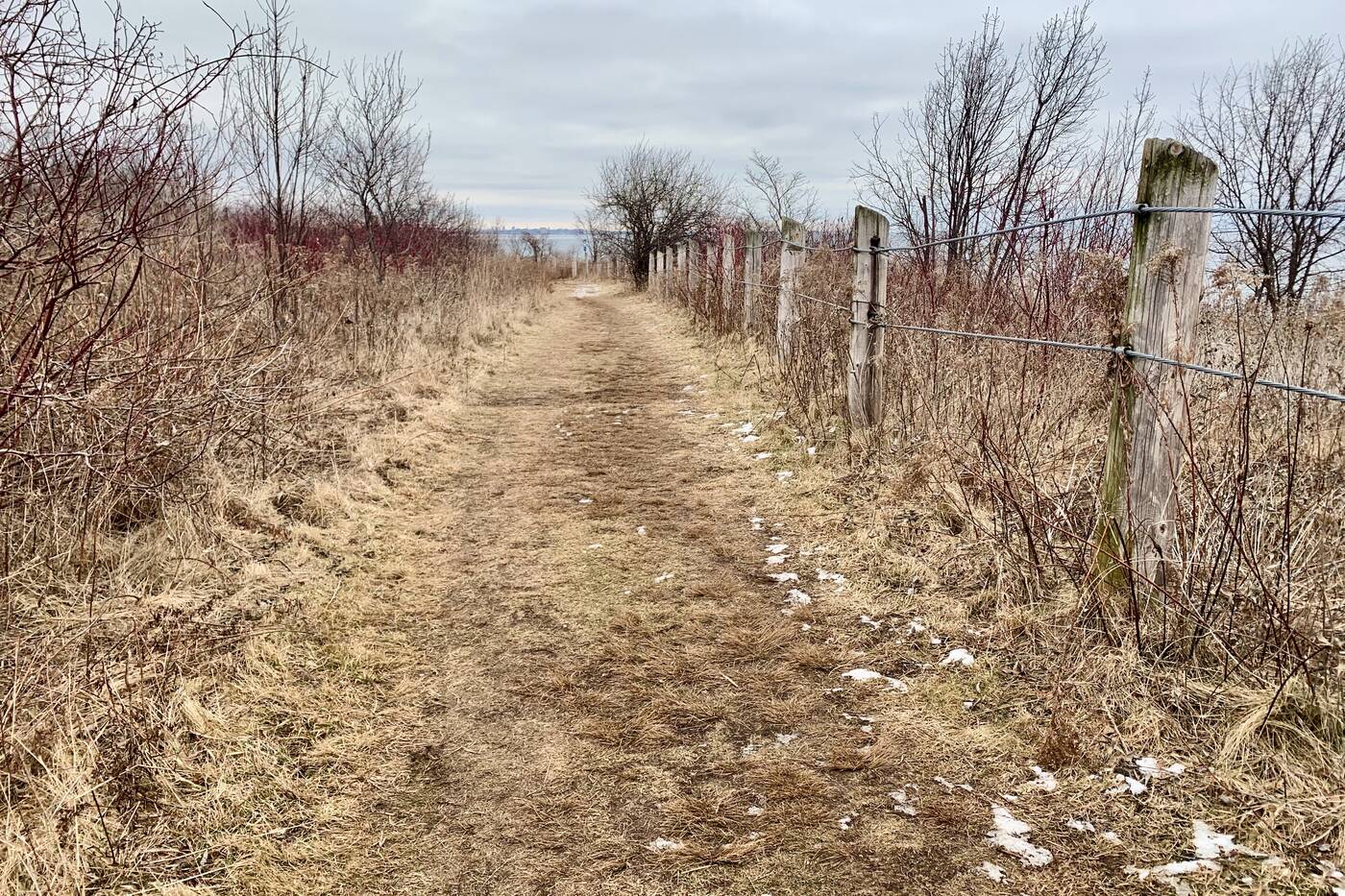 The entire trail is lined with a fence to make for a safe walk along atop the bluffs.

Although older portions of the trail run right along the edge of the bluffs, keep in mind it can be quite unsafe because erosion has undercut the cliff edge and the sand could collapse at any time. 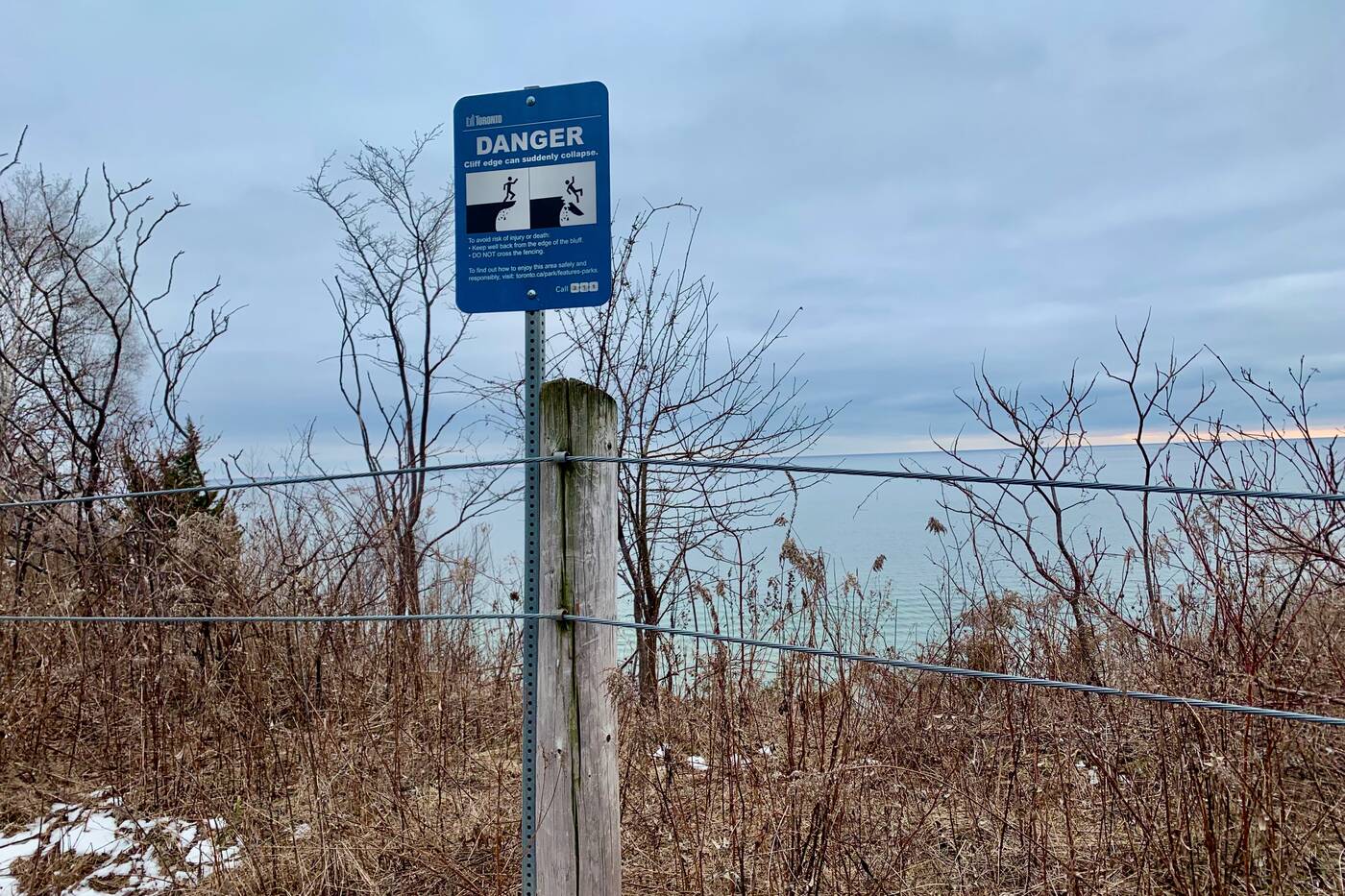 Be careful to stay behind the fence as the edge of the bluffs can be dangerous due to soil erosion.

Situated high atop the bluffs, you can expect to see expansive views of the water and the natural beach below. 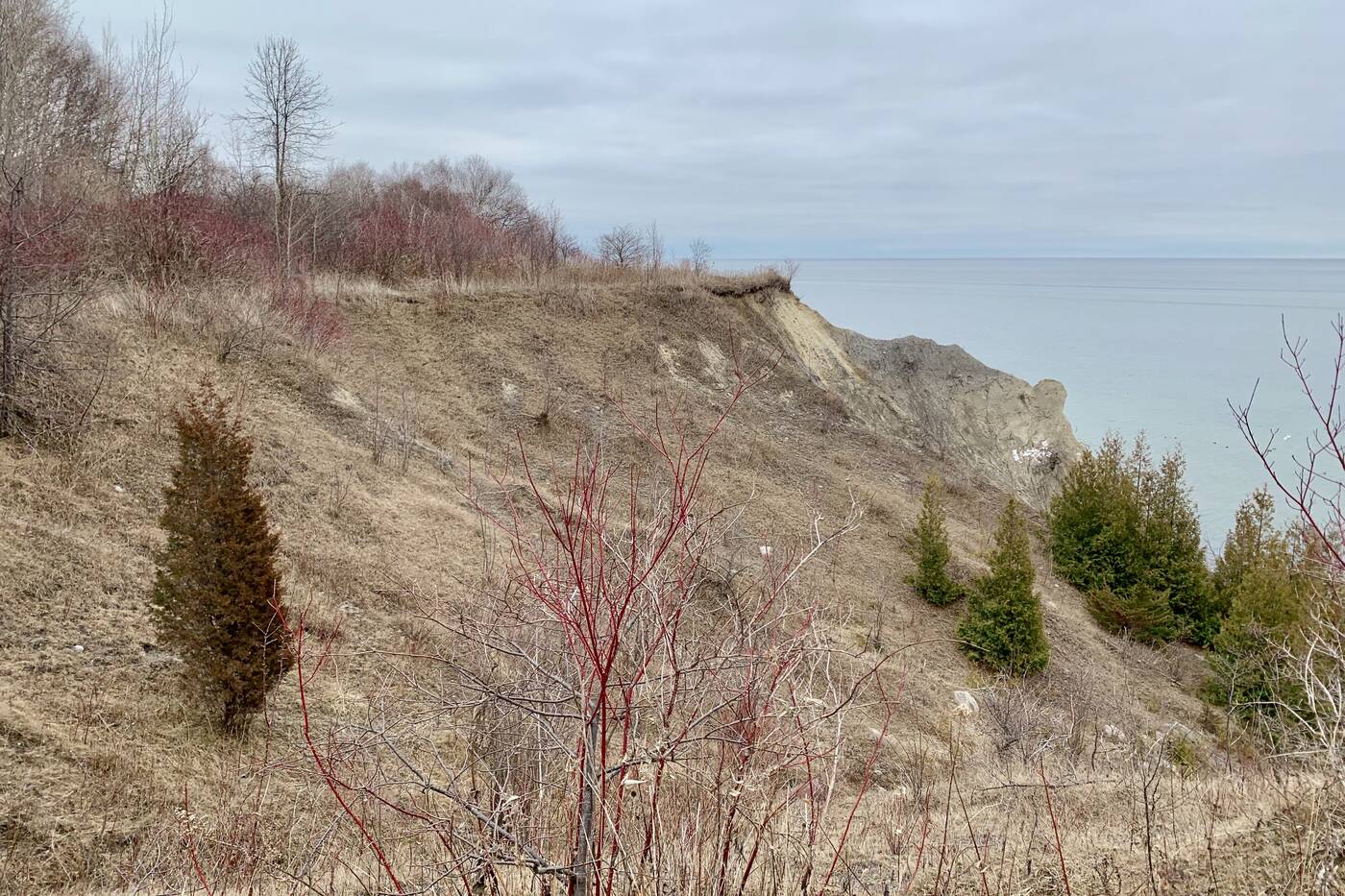 Found along the eastern portion of the Scarborough Bluffs, the park provides plenty of views of the dramatic cliff faces.

You can get to the beach by walking from the end of Beechgrove and Copperfield Road located toward the east end of the park. 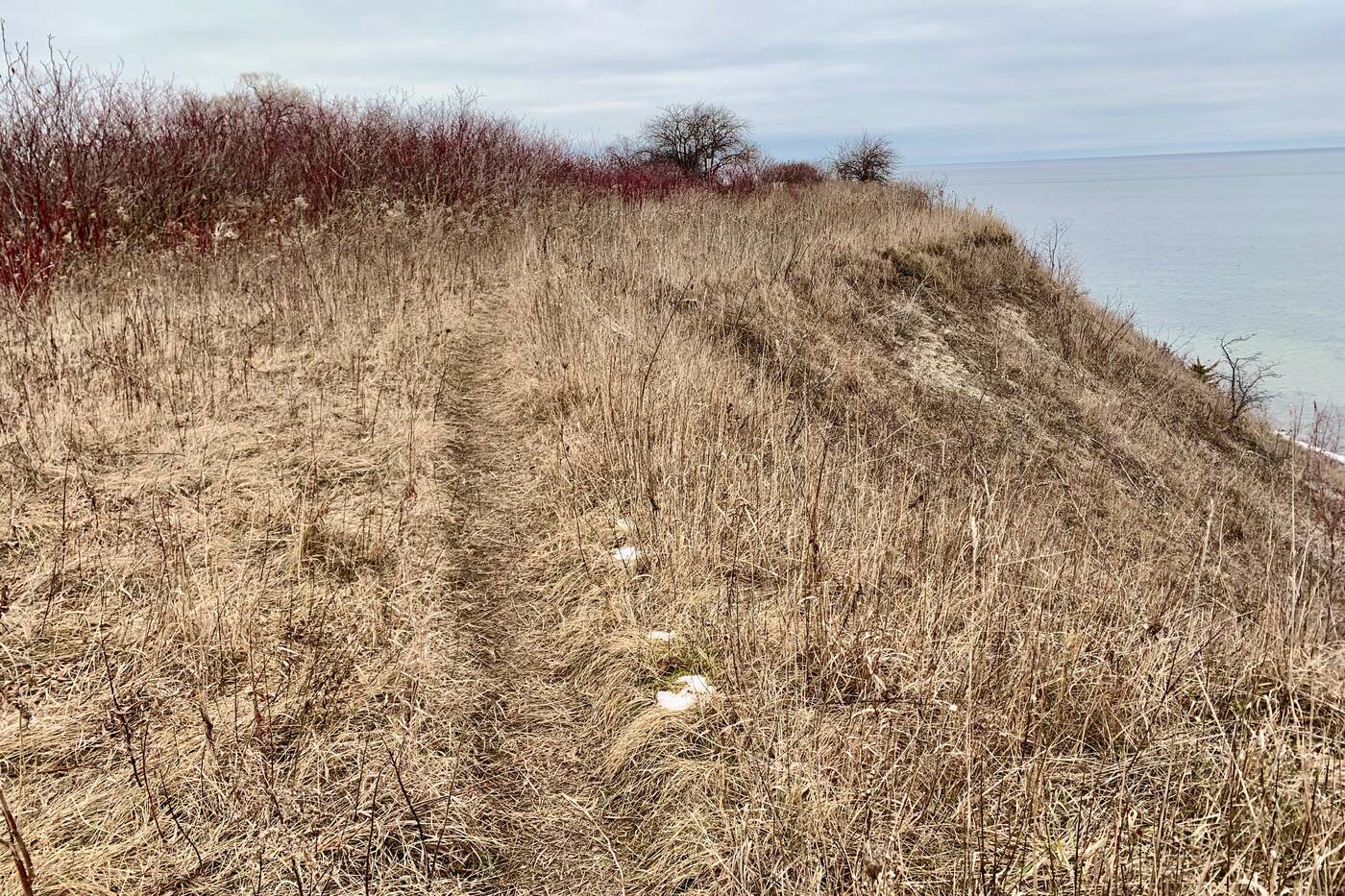 An older trail exists past the fenced-in main trail but keep in mind, sections of it can be very dangerous.

The diverse landscape ranges from meadow, bluff, shrub thicket, forest and wetland throughout the trail. The forest and shrub portions are full of vibrant reds and whites this time of the year. 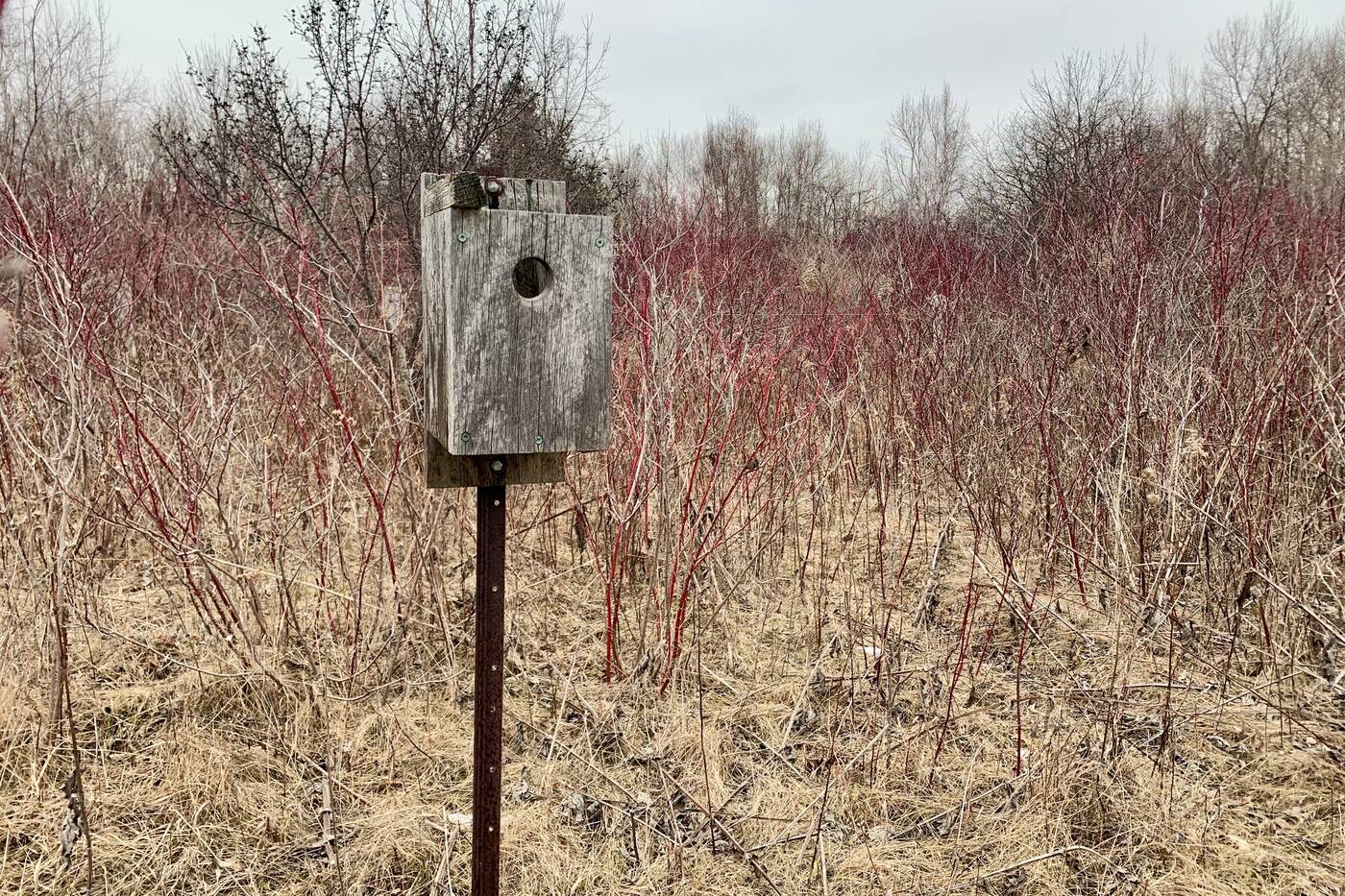 There are birdhouses and bird feeders situated all throughout the park.

The park wasn't always the natural area that it is today. During the 1800s, the land was privately owned and undeveloped and was then purchased by industrial companies before being transferred to Toronto and Region Conservation in the 1970s at which time it was restored to its more natural state. 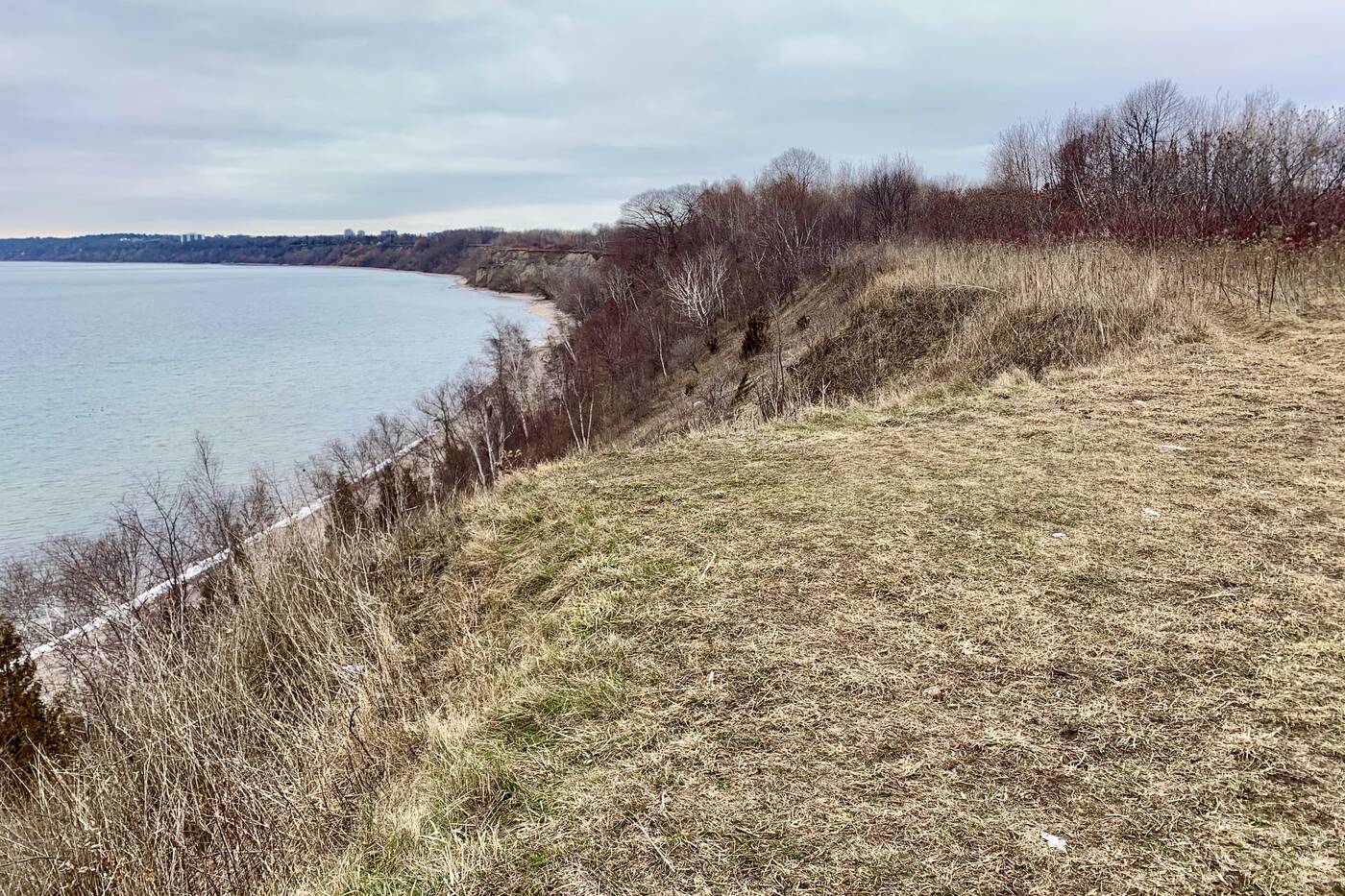 The eastern end of the park provides a nice panoramic view of the cliffs and beach below.

Today, plenty of life can be found in the park. The area is a migratory staging area for monarch butterflies in the summer, with the best time to spot them in September. It's also home to over 170 species of birds. 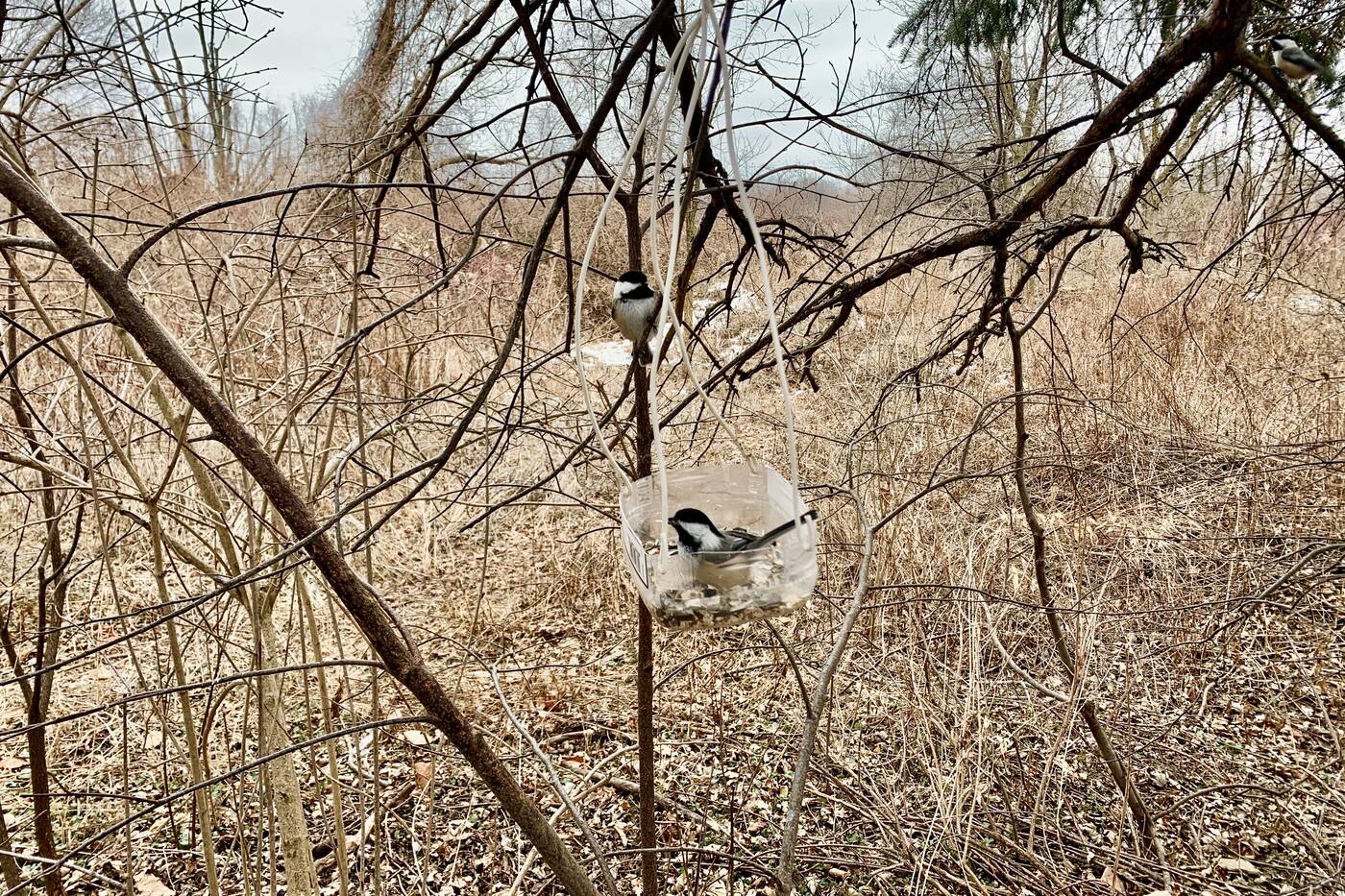 There are over 170 different types of bird species in the park.

Steel pavilions, which include water jet cutouts of clouds of birds in flight above the names of the species that frequent the area on its walls, can be found at the east end of the park. 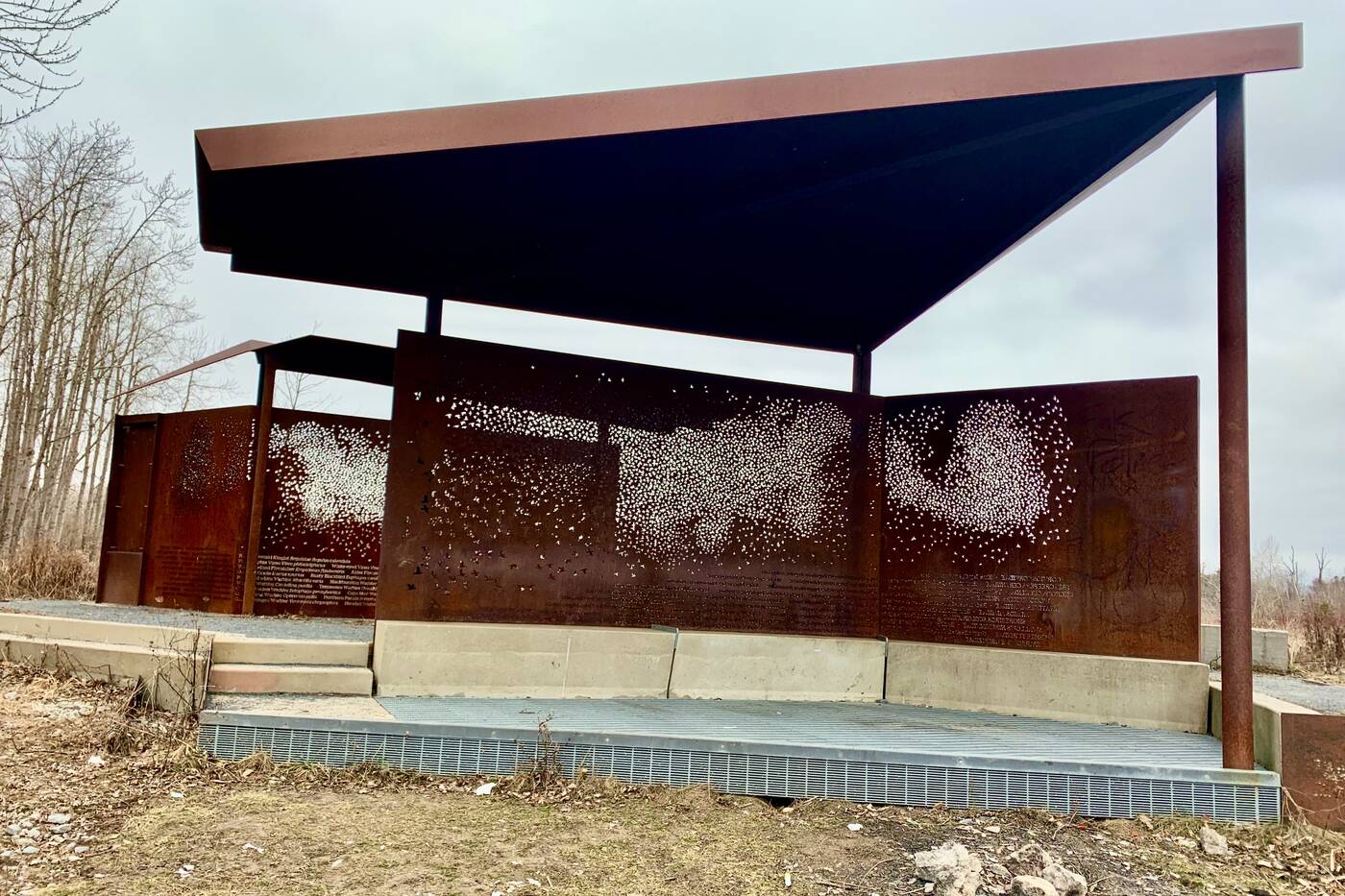 The names of the bird species that frequent the area can be found on the steel walls of the pavilion.

The interesting structure is situated next to an inland pond. 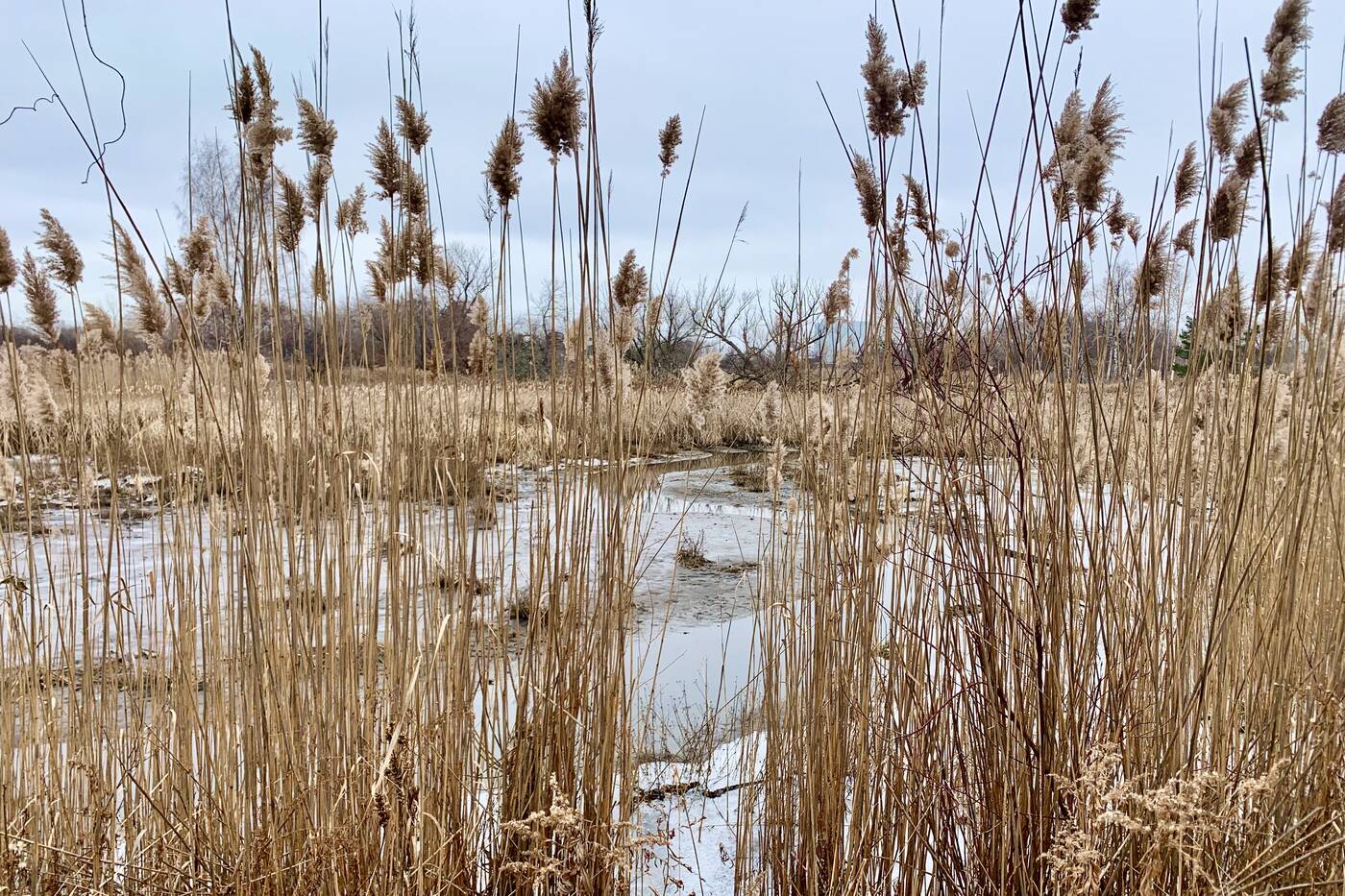 The steel pavilion is situated right next to an inland pond at the eastern end of the park.

Another structure named the Bird Blind is situated a bit closer to the wetland. Its markings, which mimic rays of sunlight, provide peeping holes where you can observe birds on the pond, unobtrusively but at close range. 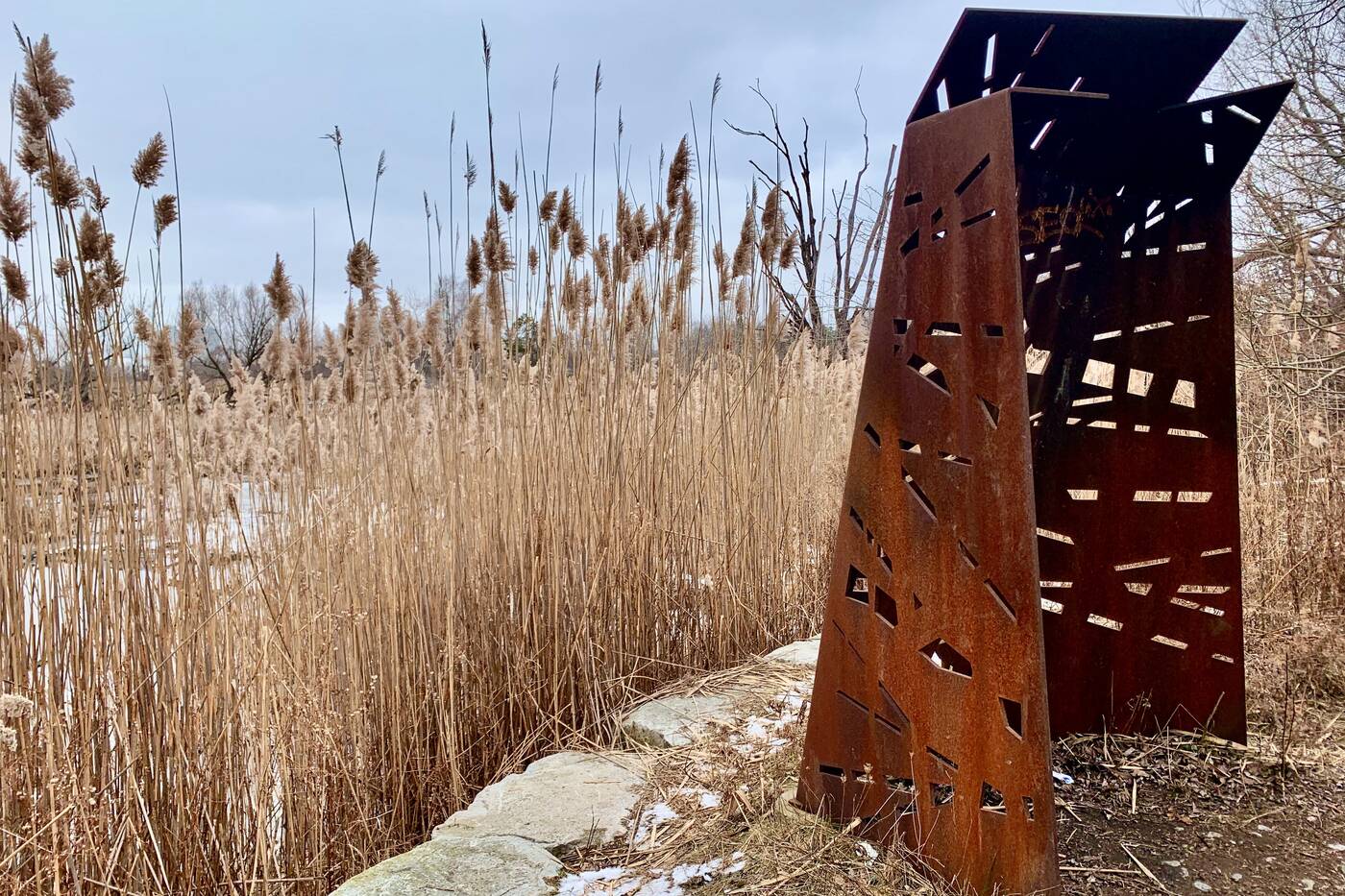 The Bird Blind is another structure situated next to the pond.

If you're interested in continuing your explorations, the park connects to the Waterfront Trail at the eastern end with Port Union Waterfront Park located just a short walk up the lake. 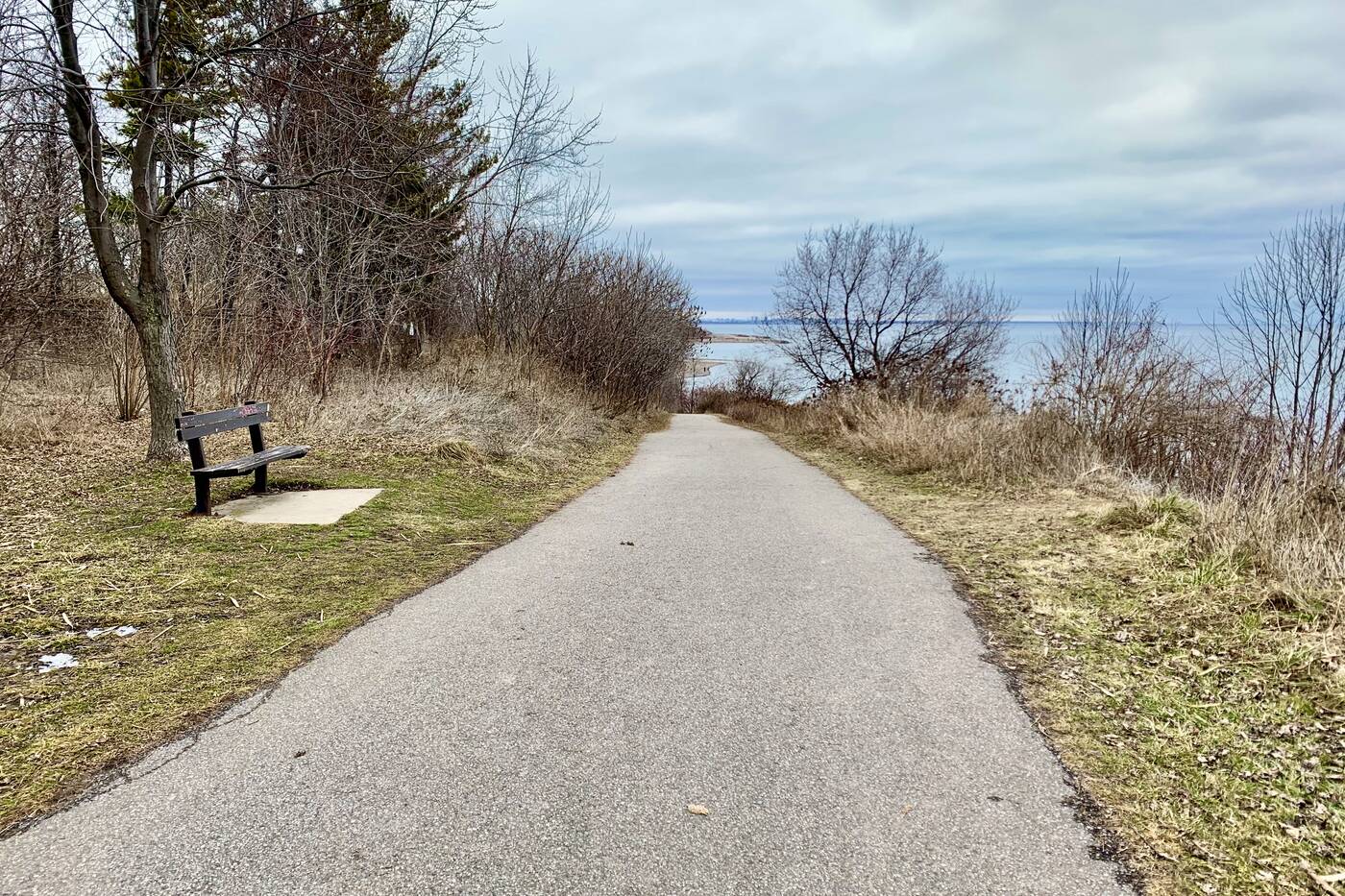