Dufferin Grove Park is Toronto's other hotspot for summer fun

Toronto has a decent share of neighbourhood green space, but those who have ever paid a visit to Dufferin Grove Park know there's something particularly special about this patch of land.

Just a two-minute bus ride on the 29 southbound from Dufferin Station, this 13-acre park stretches directly across another local institution: Dufferin Mall. 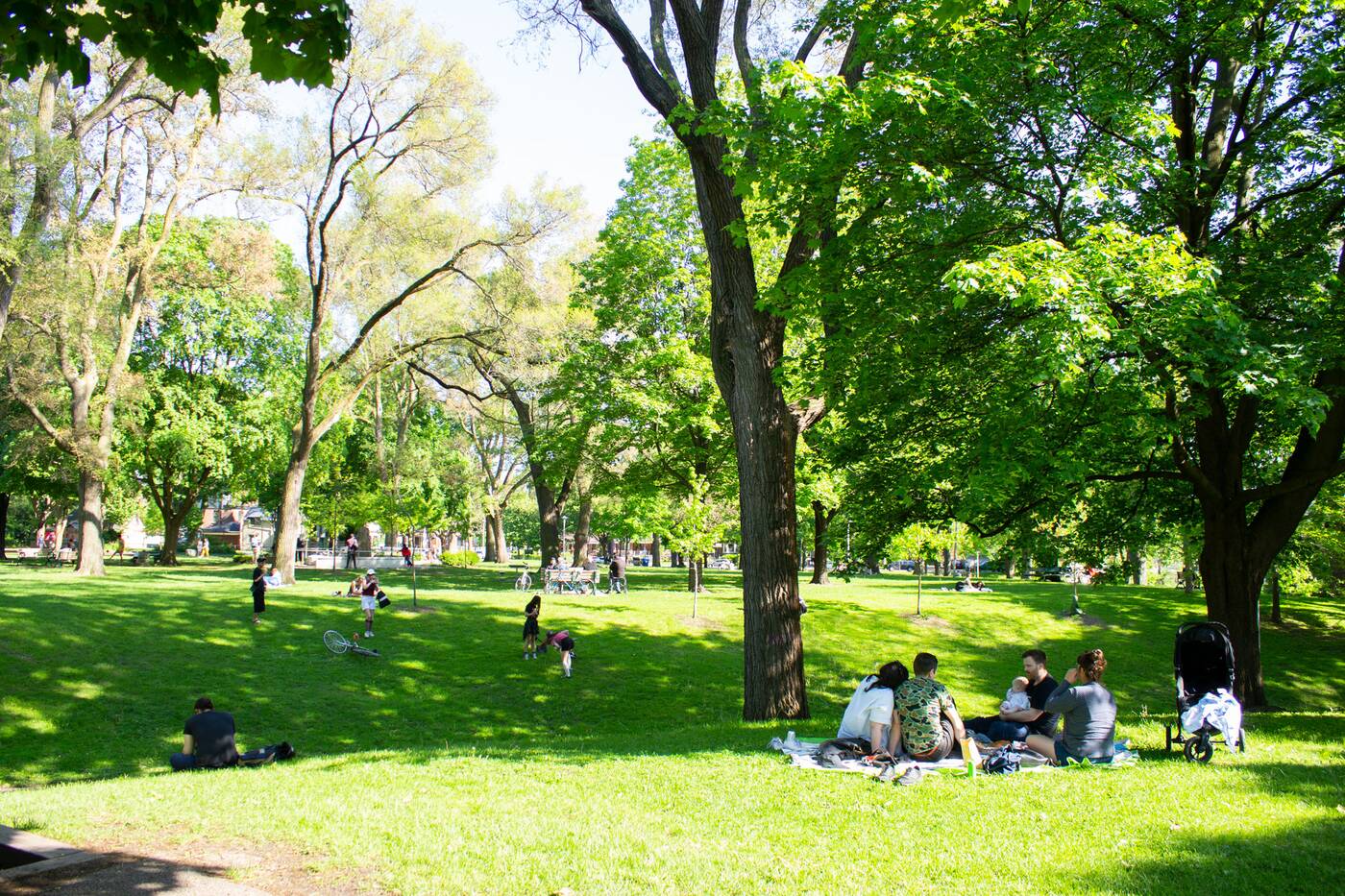 Working in tandem like two sides of the same coin, these two destinations are, in a way, necessary bastions in a neighbourhood recently called one of the coolest neighbourhoods in the world.

But, while the mall has grown to become an inside joke of sorts for people citywide, its naturesque counterpart is really what brings the cultural livelihood of this community to life. 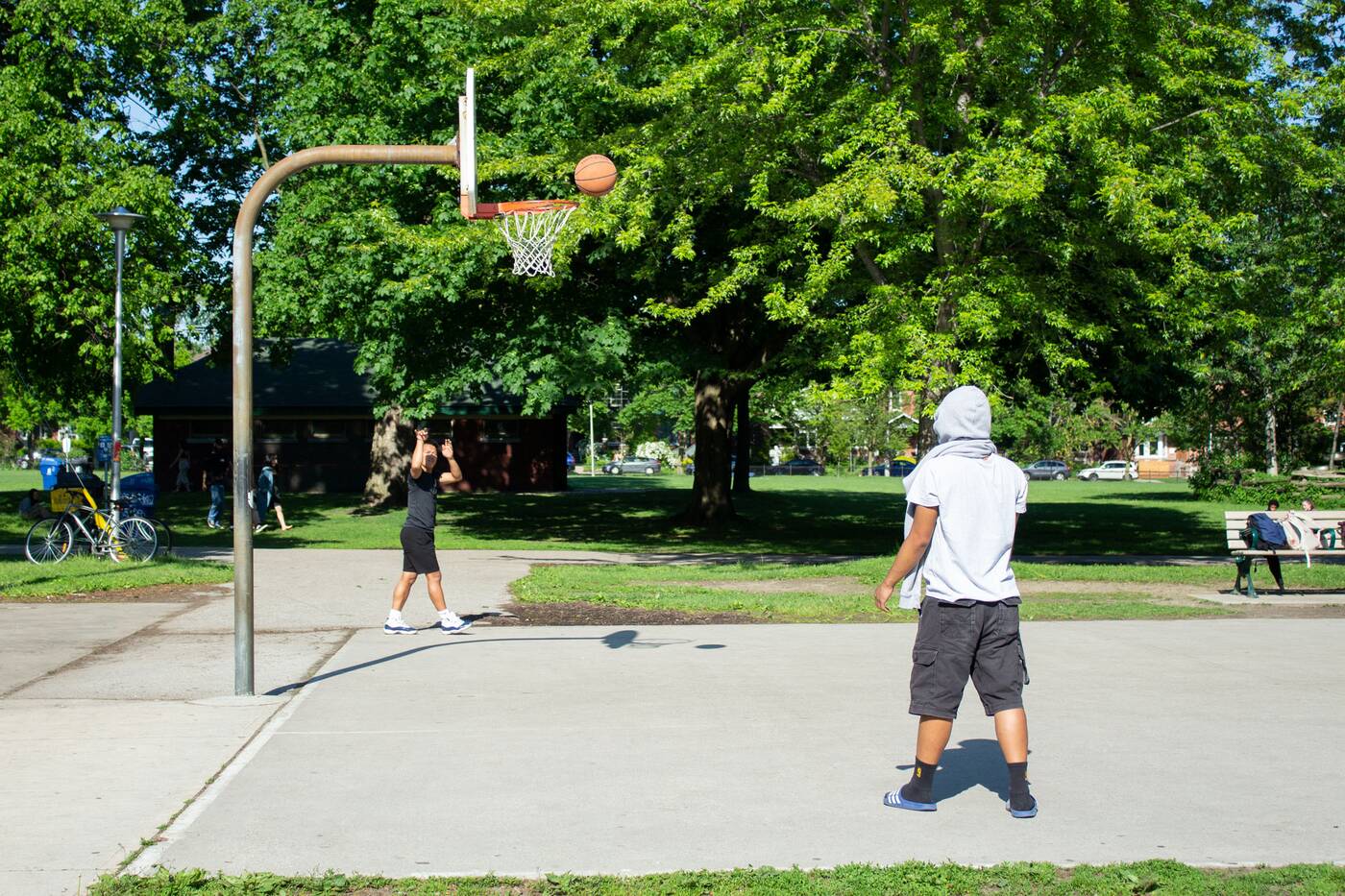 There are a number of amenities available here, from basketball nets to campfire pits.

With its canopy of old, tall sugar maples, hackberries, and sweeping swamp willows, the sloping hills of Dufferin Grove Park are home to some of your favourite Carolinian forest trees.

It's also where you'll find a system of neighbourhood groups sharing the space year-round. 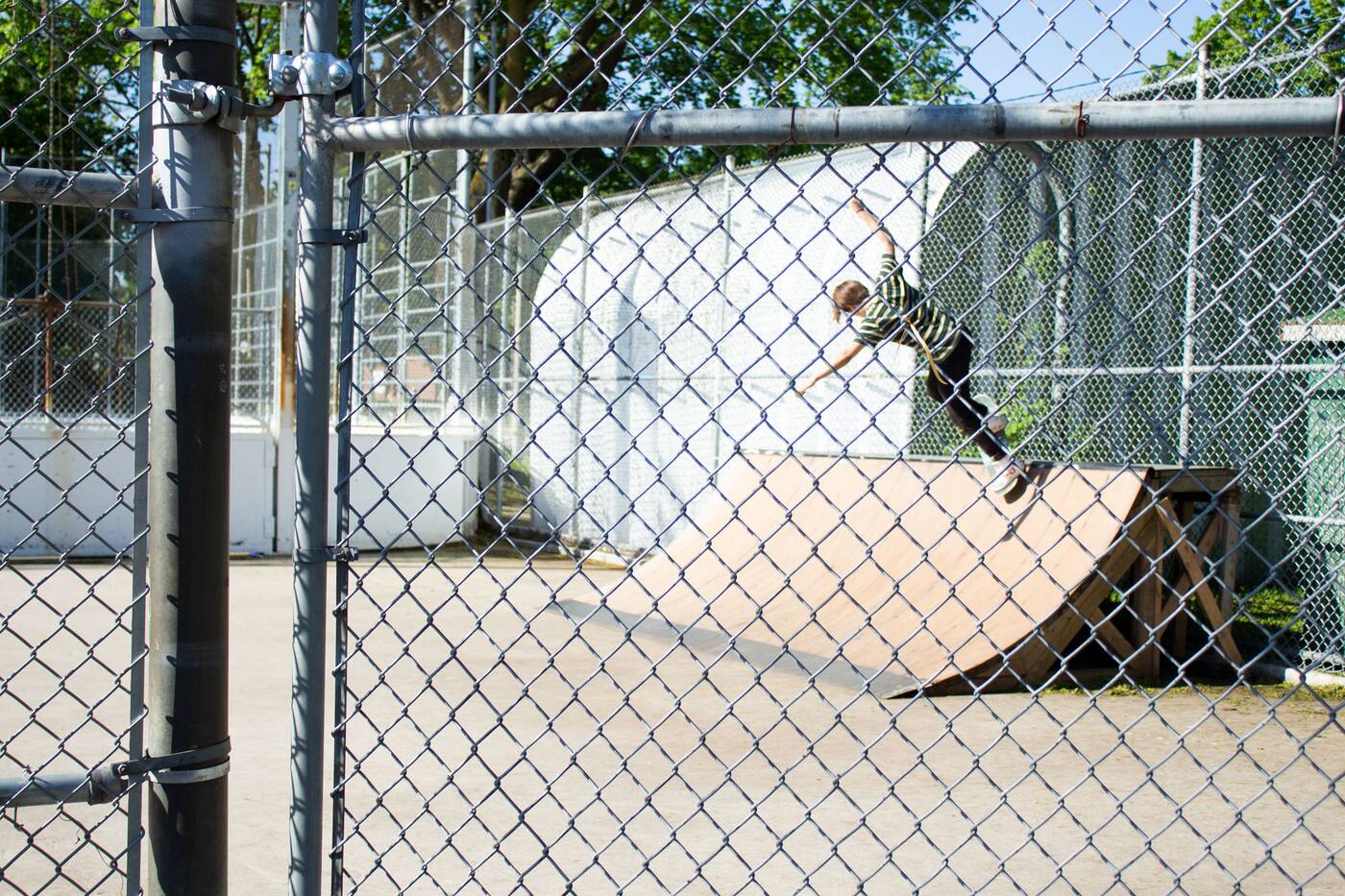 The Dufferin Grove Skatepark takes over the ice skate rink in the summer.

From organic farmers to skateboarders, and even wood oven enthusiasts: there's a sense of organization here that's unmatched elsewhere in the city.

Literature like 'The Dufferin Grove Park as a neighbourhood commons', a hand distributed pamphlet which documents all the changes in the park between 1993 and 2015, is almost sacred in its function. 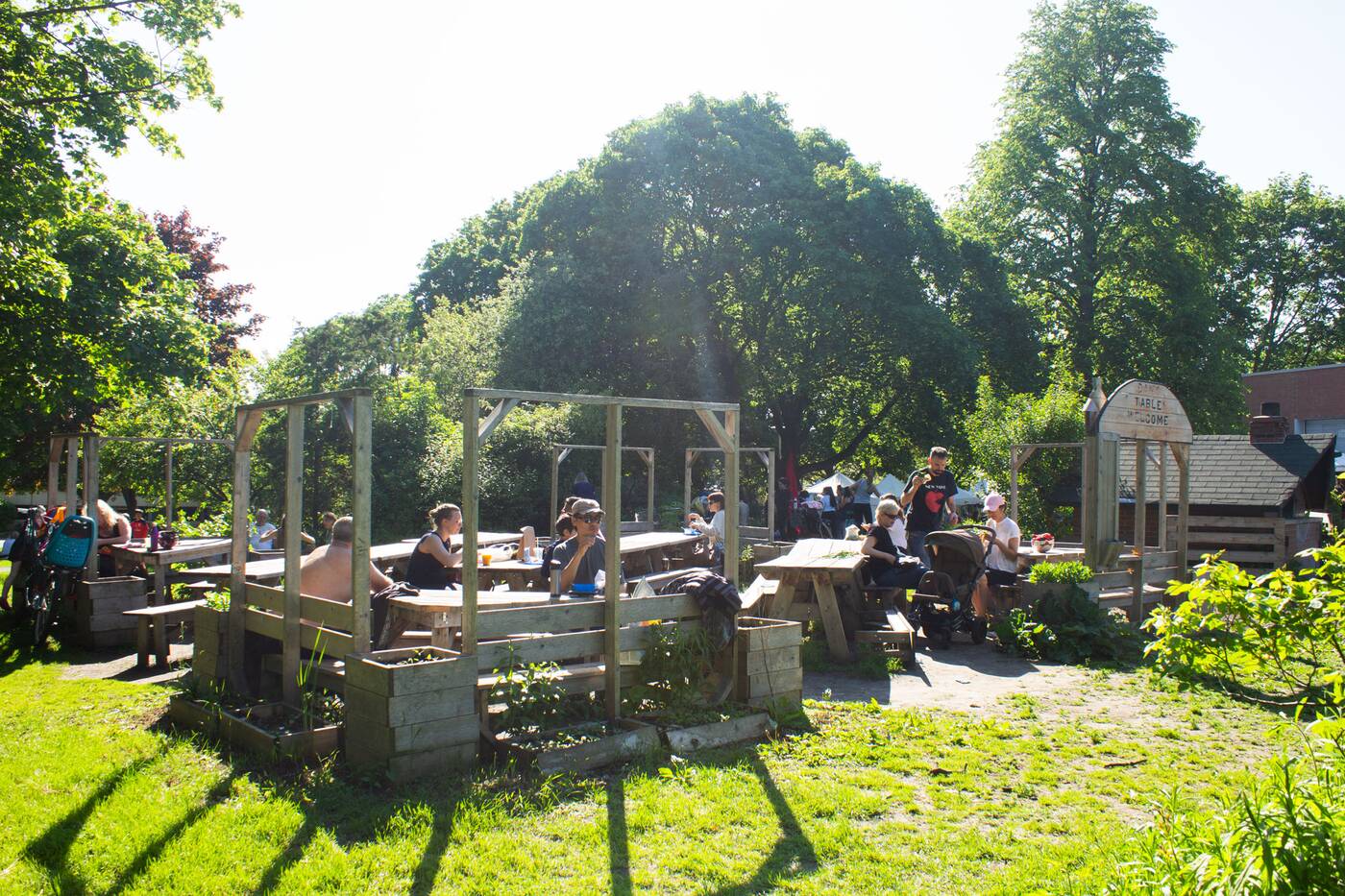 Dan's Table is a picnic bench area where families and visitors can gather by the gardens.

Created by the Centre for Local Research into Public Space (CELOS), a park watchdog and non-profit organization born out of Dufferin Grove Park in 2000, it's one of several texts made specifically with the intention of preserving the park's culture. 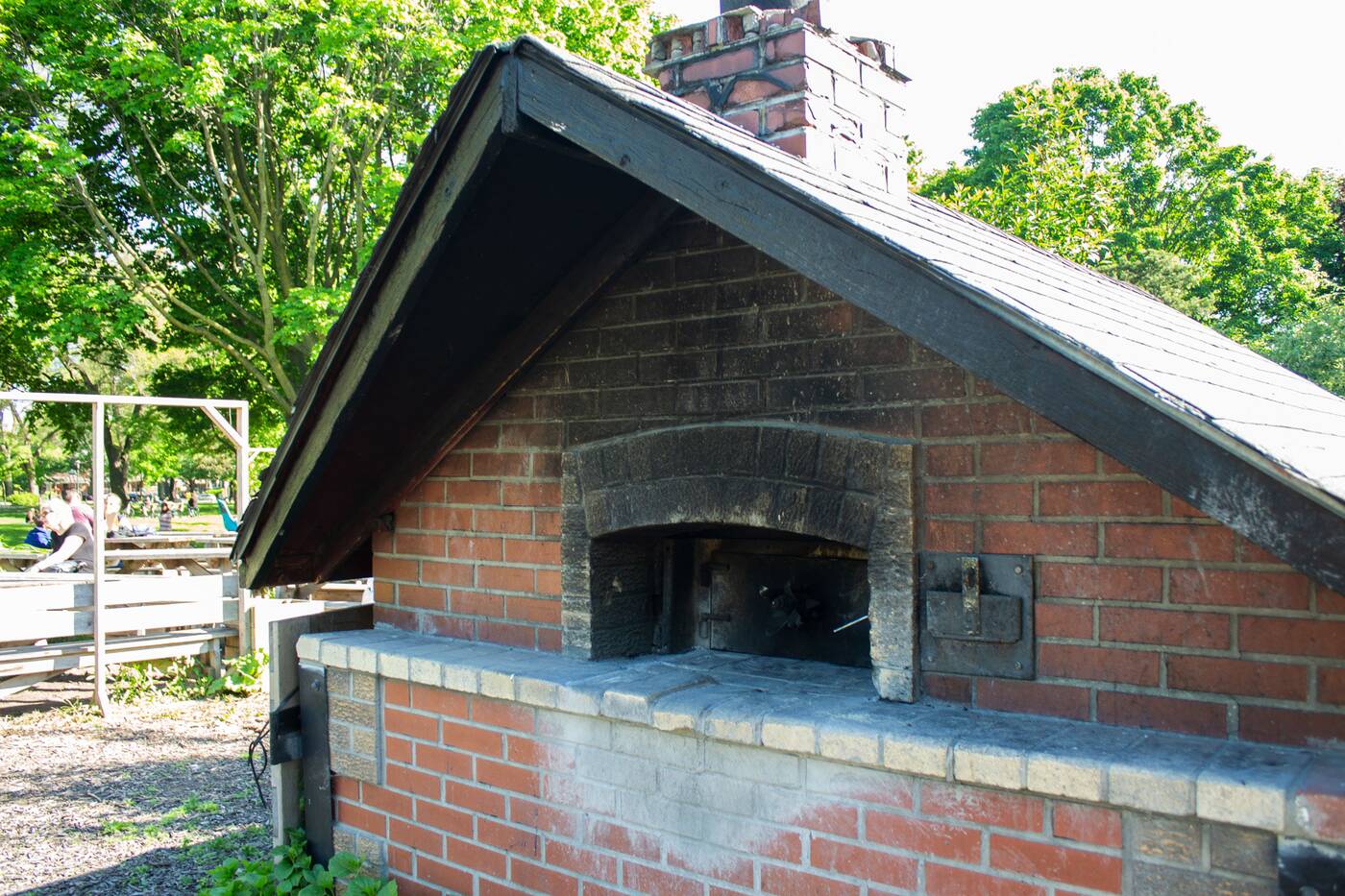 The first bake oven was introduced to the park in 1995. 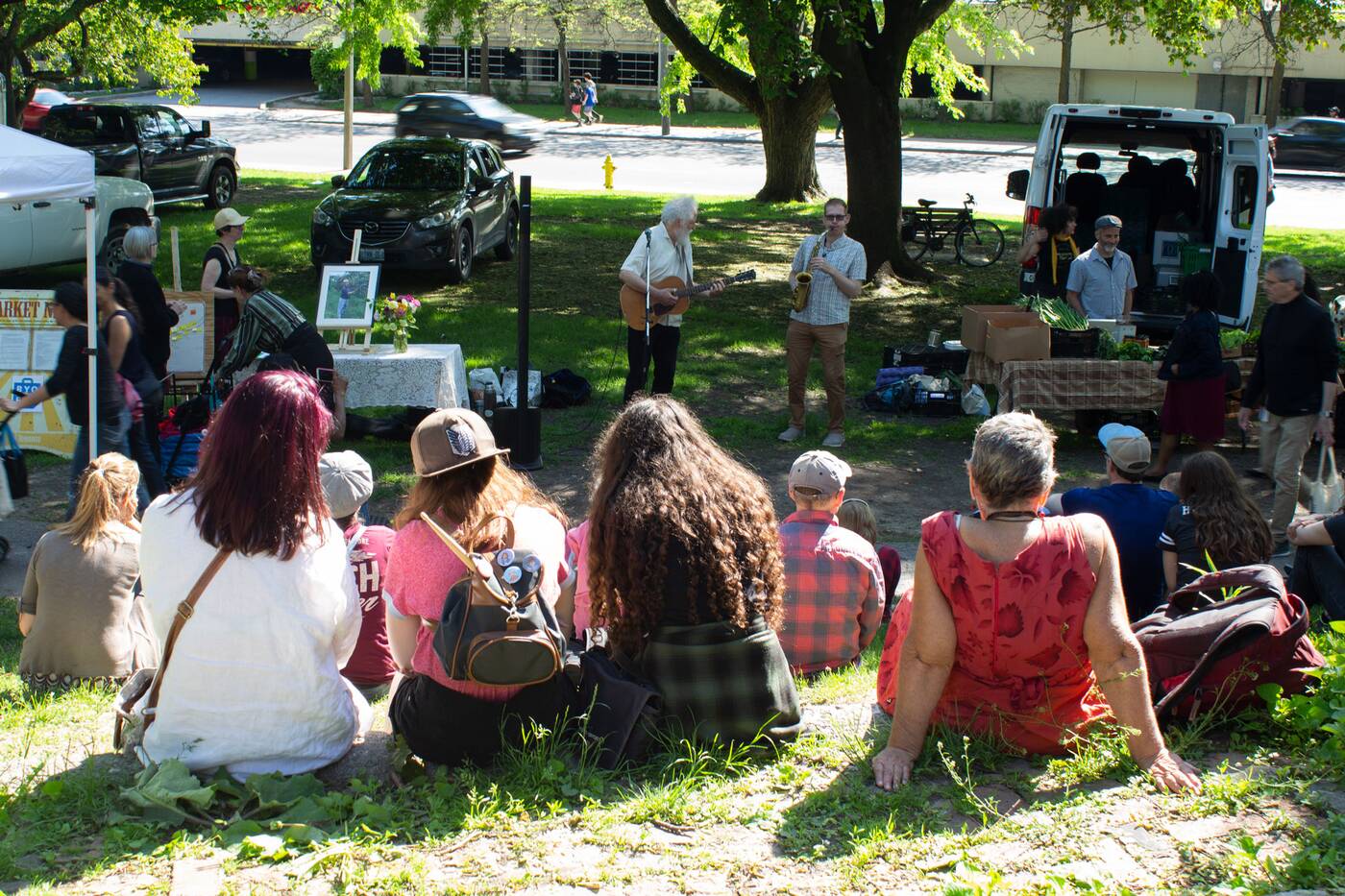 The park is busy with arts events and gatherings year-round.

The result is the kind of park where everything grows. Successful fundraising for the Dufferin Grove Skatepark in 2018 made it one of the few flourishing skate parks in a city that's sorely lacking them.

The Adventure Playground is probably one of the most popular kids' spots in the city with an enclosed area, wading pool, sandpit. 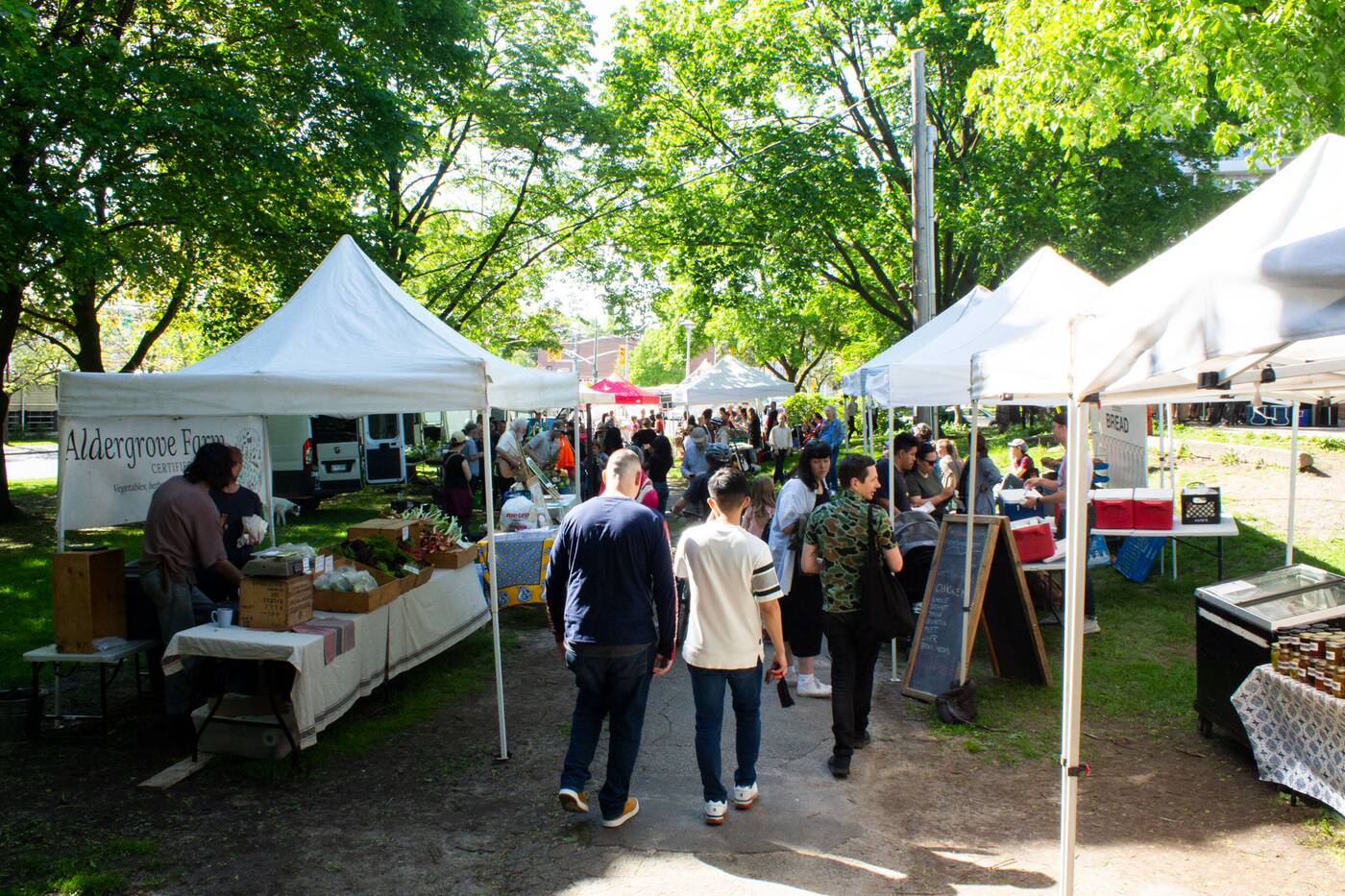 The Dufferin Grove Farmers' Market has been around since 2002.

The earthen-walled Cob Courtyard, made from 'monolithic adobe', which is a mix of sand, clay, and straw, is parts snack bar and clean-up area. Plans for a bio-toilet have been on hold for years, but the idea was nice.

And the allotment gardens continue to bear the fruit of gardeners' labour. 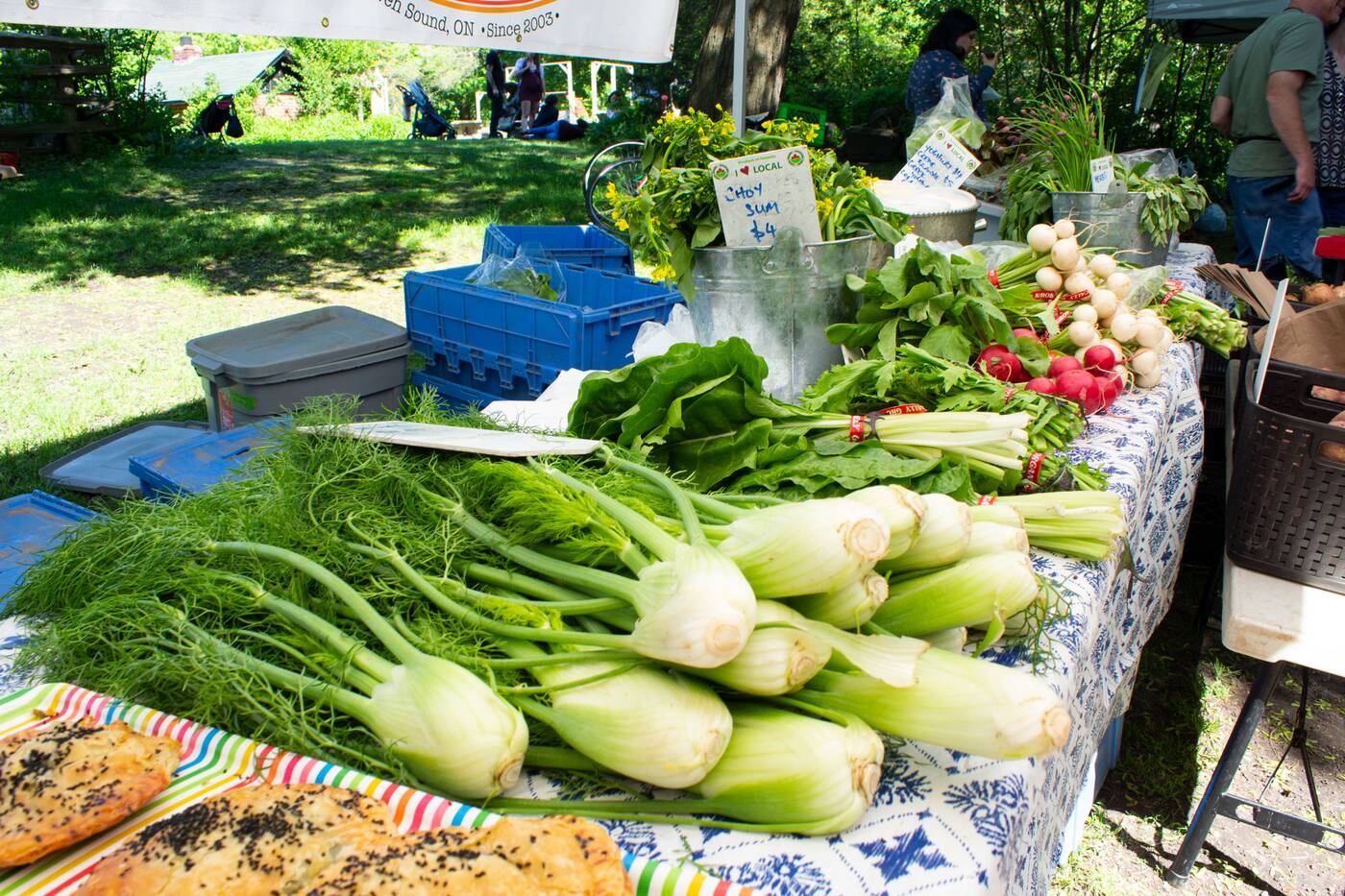 The weekly market has the highest number of organic certified vendors out of all Toronto markets.

Perhaps the most popular event at the park, The Dufferin Grove Farmers' Market, has been a consistent Thursday staple since it first launched in 2002.

According to market co-manager Anne Freeman, it has the highest concentration of organic certified vendors, making it an incubator of sorts for healthy new businesses to take flight. 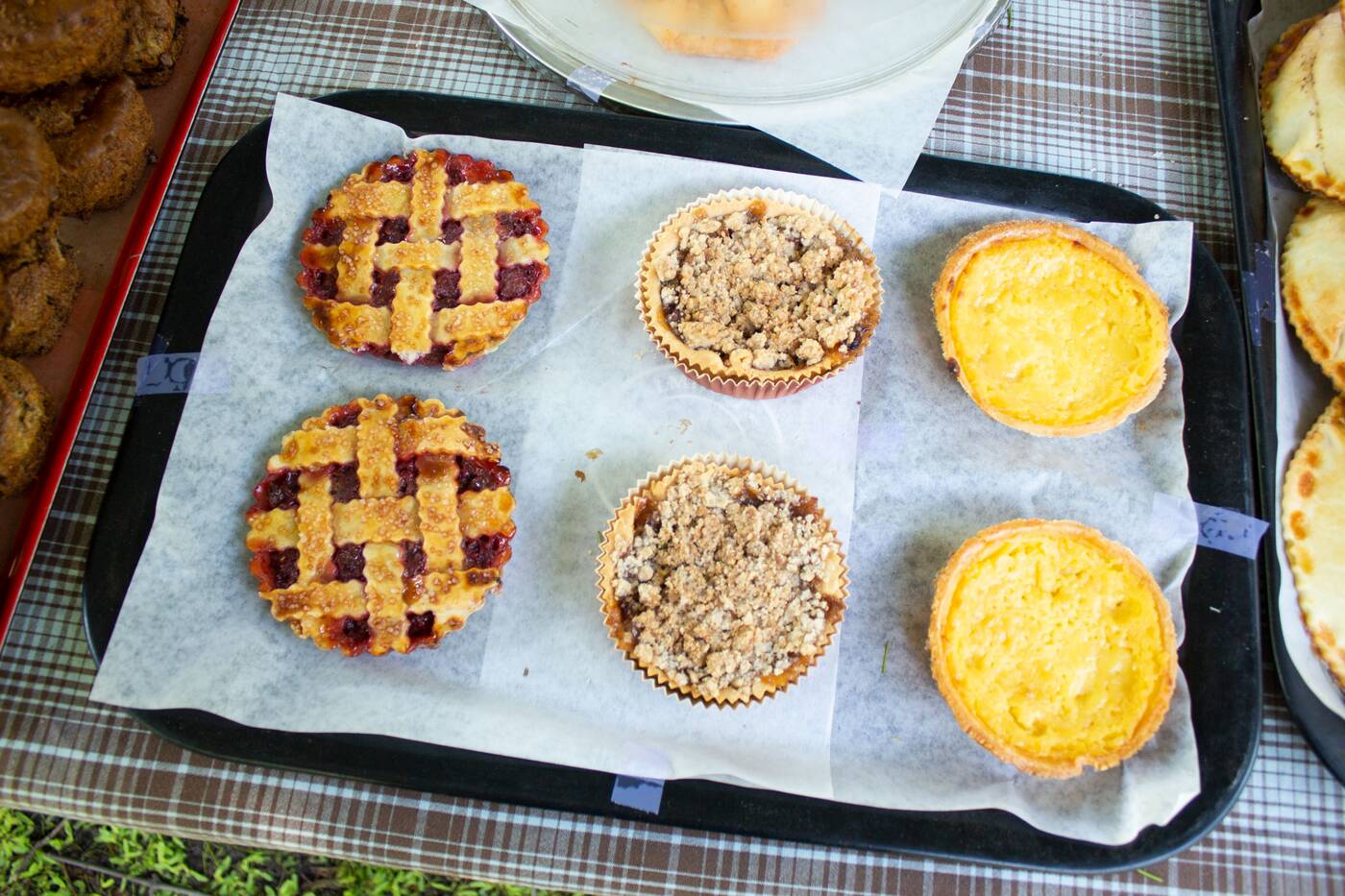 Businesses like de Floured got their first start from the market.

I visit one Thursday and catch a memorial for Debbie Wiecha, a longtime vendor who, according to speakers, would be greatly missed for her peaches and berries. 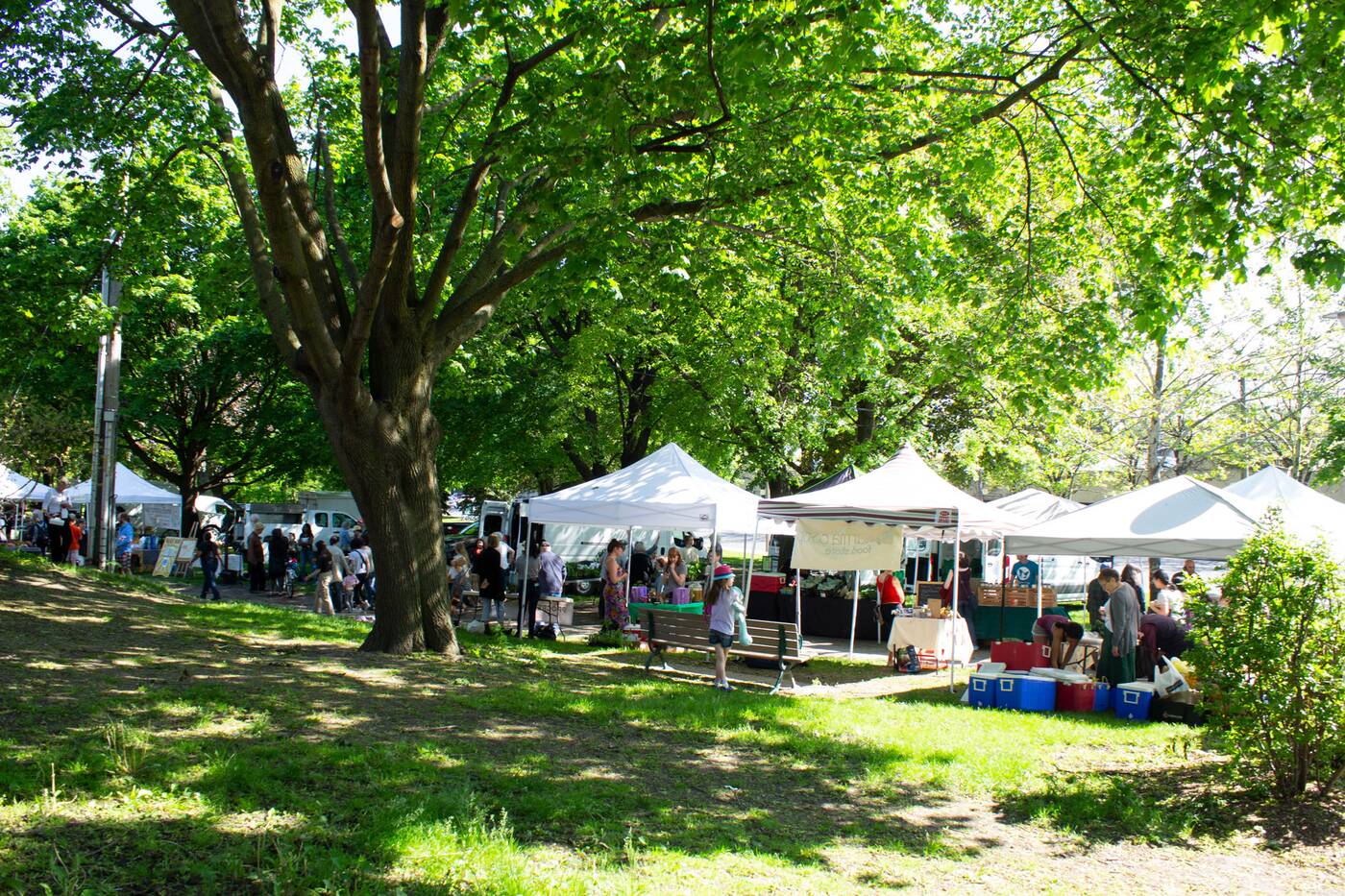