Corktown Common is Toronto's newest park and since its soft opening earlier this summer our expectations about what a park can be have been raised a whole lot. Parks, like public transit and garbage collection, are one of those things that define a city's basic duties, and most of the time a few trees, some lawn, a playground and a bench or two seem about as much as we can expect. Not here. 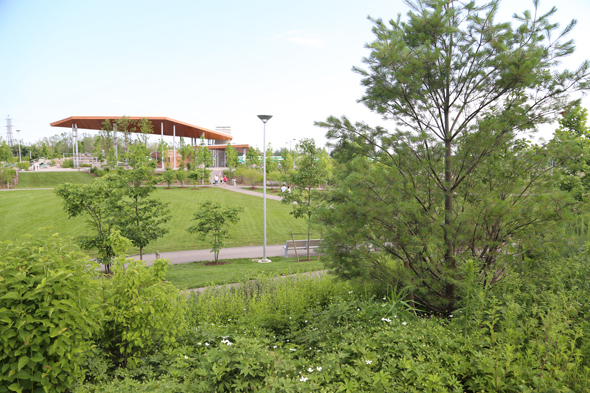 Carved out of what was once the William Davies hog abbatoir, the new park is built on top of the Flood Protection Landform sculpted to protect the new Canary District development on one side from the Don River on the other - an expensive and time-consuming project that was undertaken with no small amount of foresight. 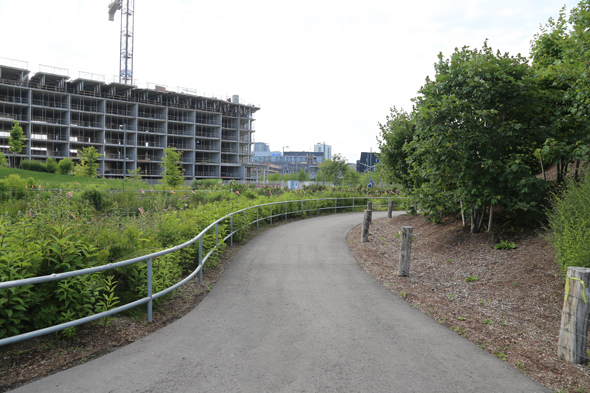 The resulting park is full of dips and rises and contains spectacular views of the downtown skyline to the west, past the cranes and construction of what will (temporarily) be the athlete's village for the Pan-Am Games. 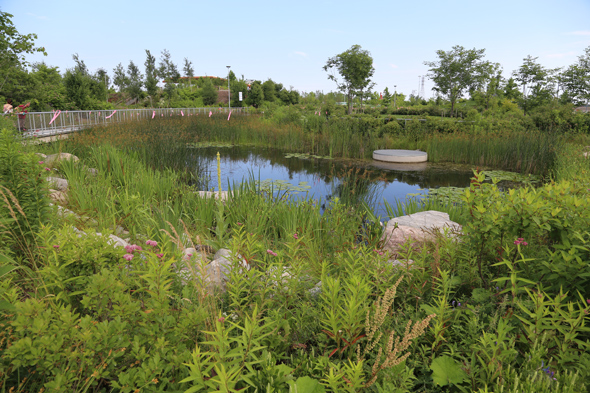 What's on view this summer is just less than half of the complete park, but it's the best part - a wetland pond and sheltered lawns crowned by probably the most spectacular playground in the city of Toronto. It's been tantalizingly out of reach behind tall fencing since last year, as the landscaping has been allowed to grow in, but it's open now until September 2nd, after which it will close again until the park is complete next year. 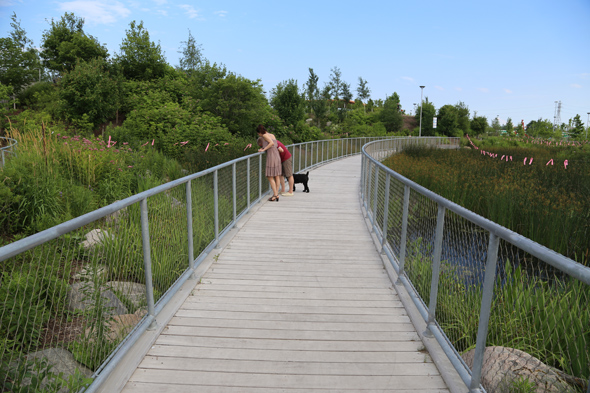 Right now you enter the park from the foot of River Street, past several nearly-finished condos. River Square, a formal parkette reminiscent of urban squares you'll find in Europe, is still unfinished, so you enter the park by wandering around the wetland ponds, full of blooming water lilies and ringed with bulrushes. 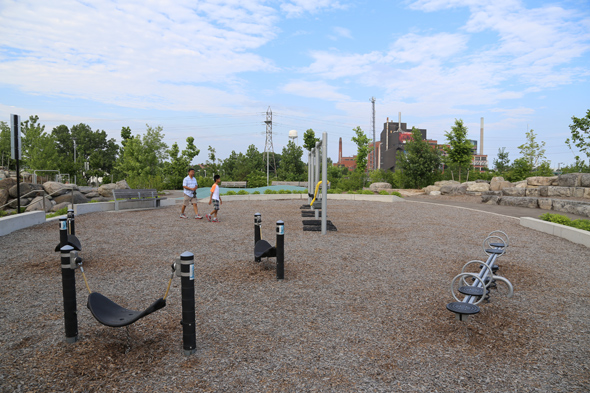 The path takes you through a grassy bowl that will double as an amphitheatre, on the way to the playground built into the highest point in the park. There are swings, of course, and a couple of slides, and an adventure playground with a touch-operated fountain providing the water essential to mud pies and sand castles. 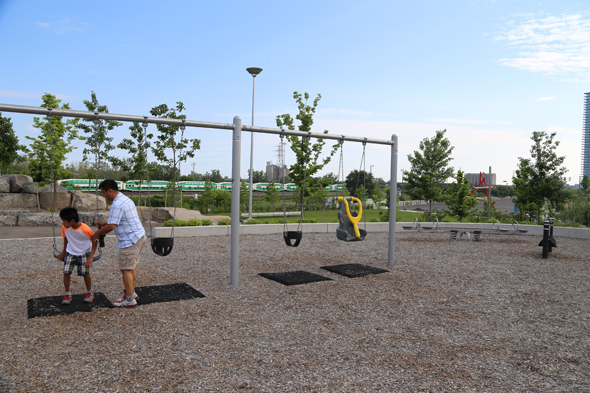 There's plenty of clean sand and a new carpet of bark mulch, but much of the park is built from a rubbery, high-tech ground cover that gives the whole place a Seuss-like feel. 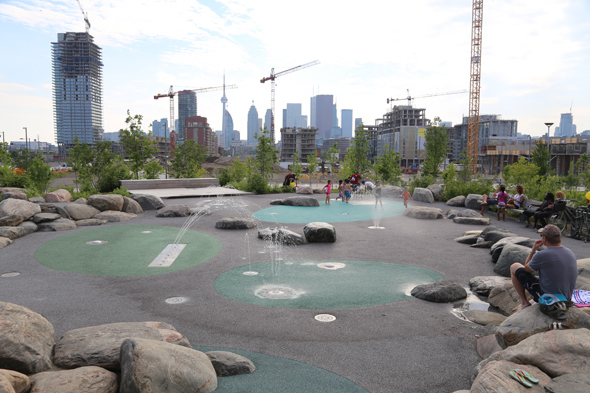 On the far side is the water play area, made of more rubbery padding, with a collection of nozzles and fountains that jet and spray water in endless shapes, on staggered timers triggered by a trio of silver domes embedded in the ground. On a hot summer day, it's the best part of the park, full of wet, giddy kids while their moms and dads sit among the big river boulders at the edge of the splash pad. 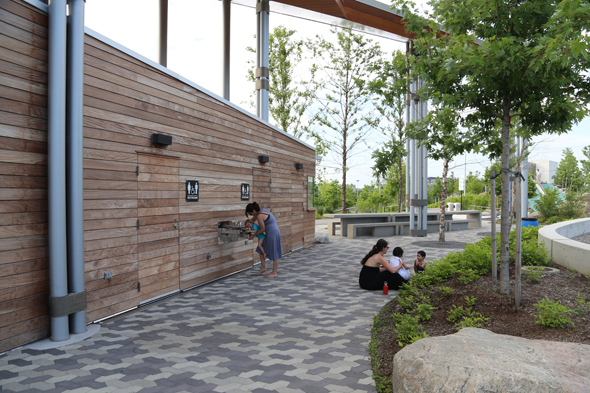 In the centre is a pavilion providing welcome shade under long awnings made of beautiful, copper-coloured wood. There are unisex washrooms with changing tables, water fountains and concrete picnic tables, and a staffed park office next to an outdoor lounge next to a public fireplace. Folding walls to block the wind pull out on rails built into the floor. Everything is clean and new, and a cleaner makes his way around the park keeping it tidy. 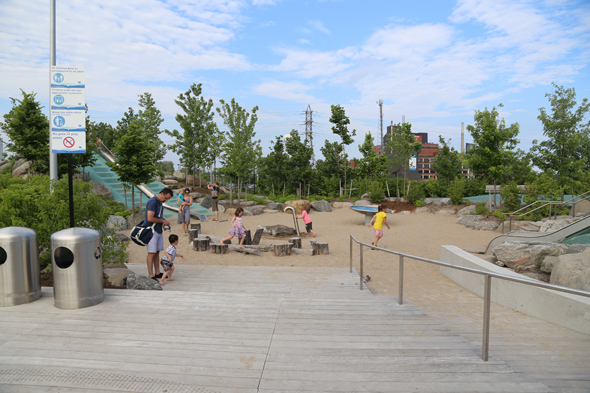 The design team at Michael Van Valkenburgh Associates have thought through every possible use the park could host, and have produced a public space that imagines an enthusiastic local community using Corktown Common with a pride of ownership that I would, in an optimistic frame of mind, love to see. The problem is that this optimism has been so often disappointed. 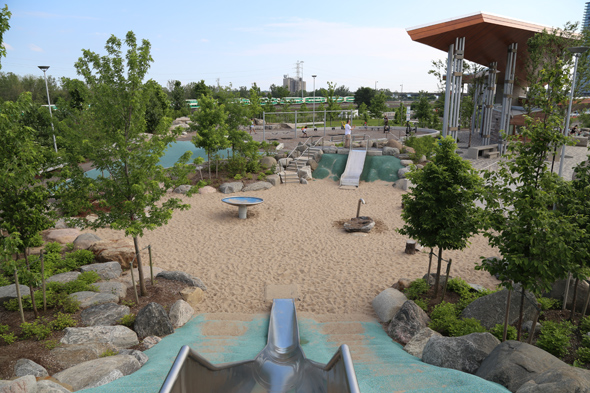 At first I'm literally stunned that the City has managed to build something so successful, with little apparent compromise or tedious cost-cutting. But then I re-read the signs on the edge of the park and am reminded that Corktown Common wasn't built by the City of Toronto, but by Waterfront Toronto, an entity with three levels of government funding and a semi-autonomous mandate that makes them virtually immune from the city's business as usual. 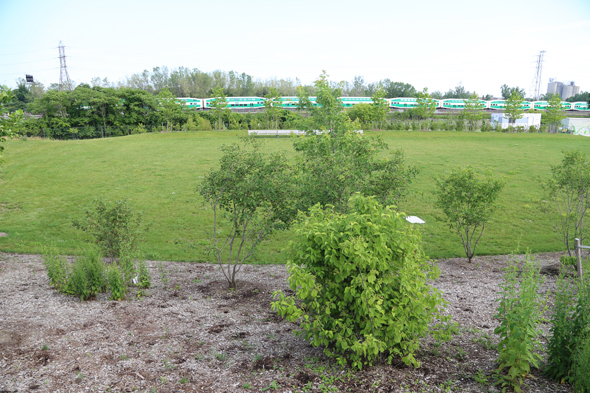 I want to end on a sunny note, but I feel obliged to insist that you should go and enjoy Corktown Common now, even in its incomplete state, and before Waterfront Toronto hands management of the park over the city when it's finished next year. Because the second word in the park's name is "Common," and if you're aware of the concept of the "Tragedy of the Commons," you know that public ownership doesn't usually succeed on its appeal to our sense of community as much as it fails through the neglect and destructiveness of the less civic-minded.

And even if the unqualified success of Corktown Common inspires an explosion of local pride, it will still be handed over to the tender mercies of municipal bureaucracy and the race-to-the-bottom of city budget priorities. The people behind Corktown Common deserve praise; this is what every public park space should aspire to copy. I can only hope we're worthy. 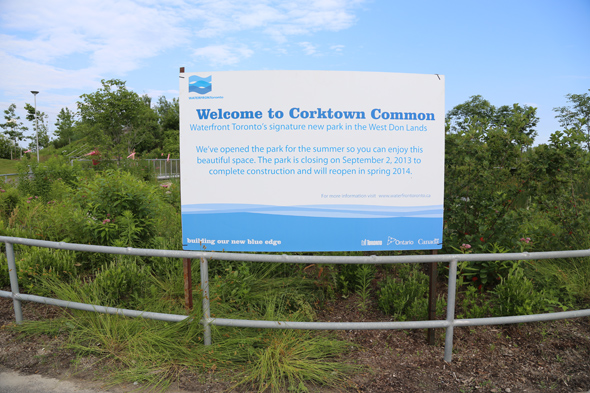 More info about Corktown Common is available on the Waterfront Toronto web site.