Part of a long chain of parks along the waterfront, it includes a small section of the Martin Goodman Waterfront Trail and plenty of views of the Lake. 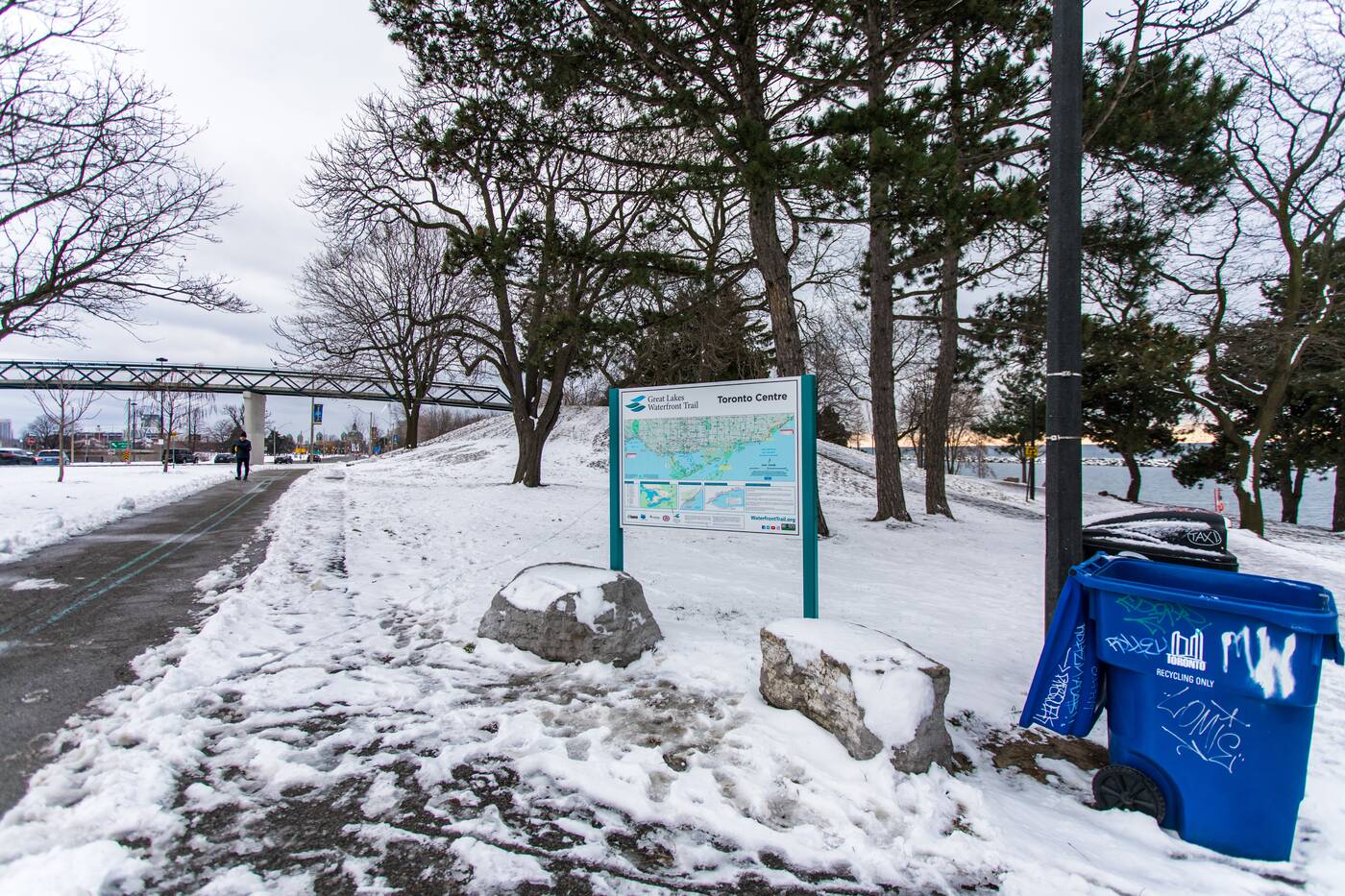 A portion of the Martin Goodman Trail runs through the park.

The 14-foot (4.5-metre) wide two-lane paved trail, which runs along the northern edge of the park beside Lake Shore Boulevard, is primarily used by bikers and joggers. 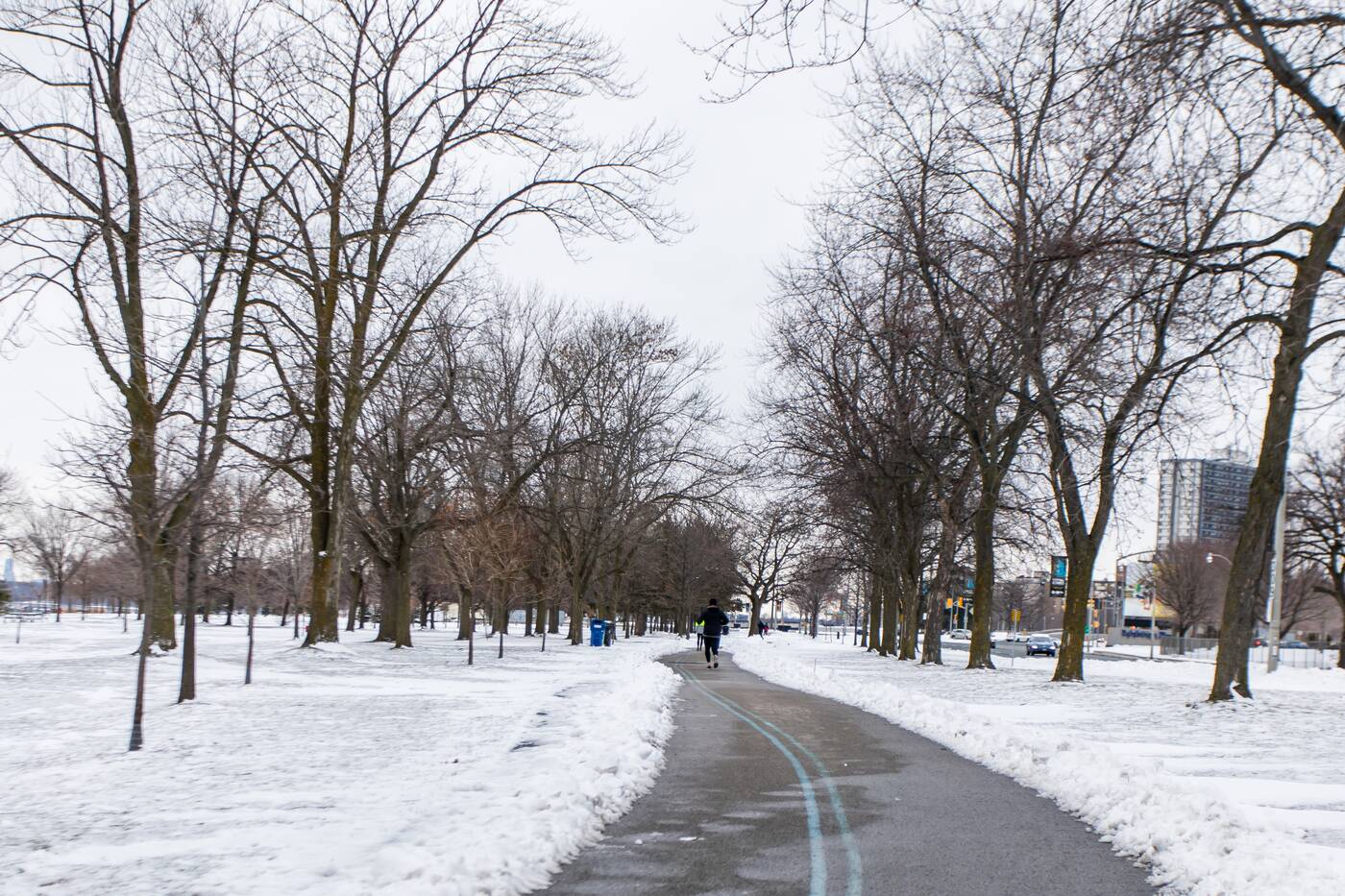 The multi-use paved trails are useable all year-round.

The by-pass trail stretches about 810 metres through the park before traversing the rest of Toronto's lakefront for another 56 kilometres or so. 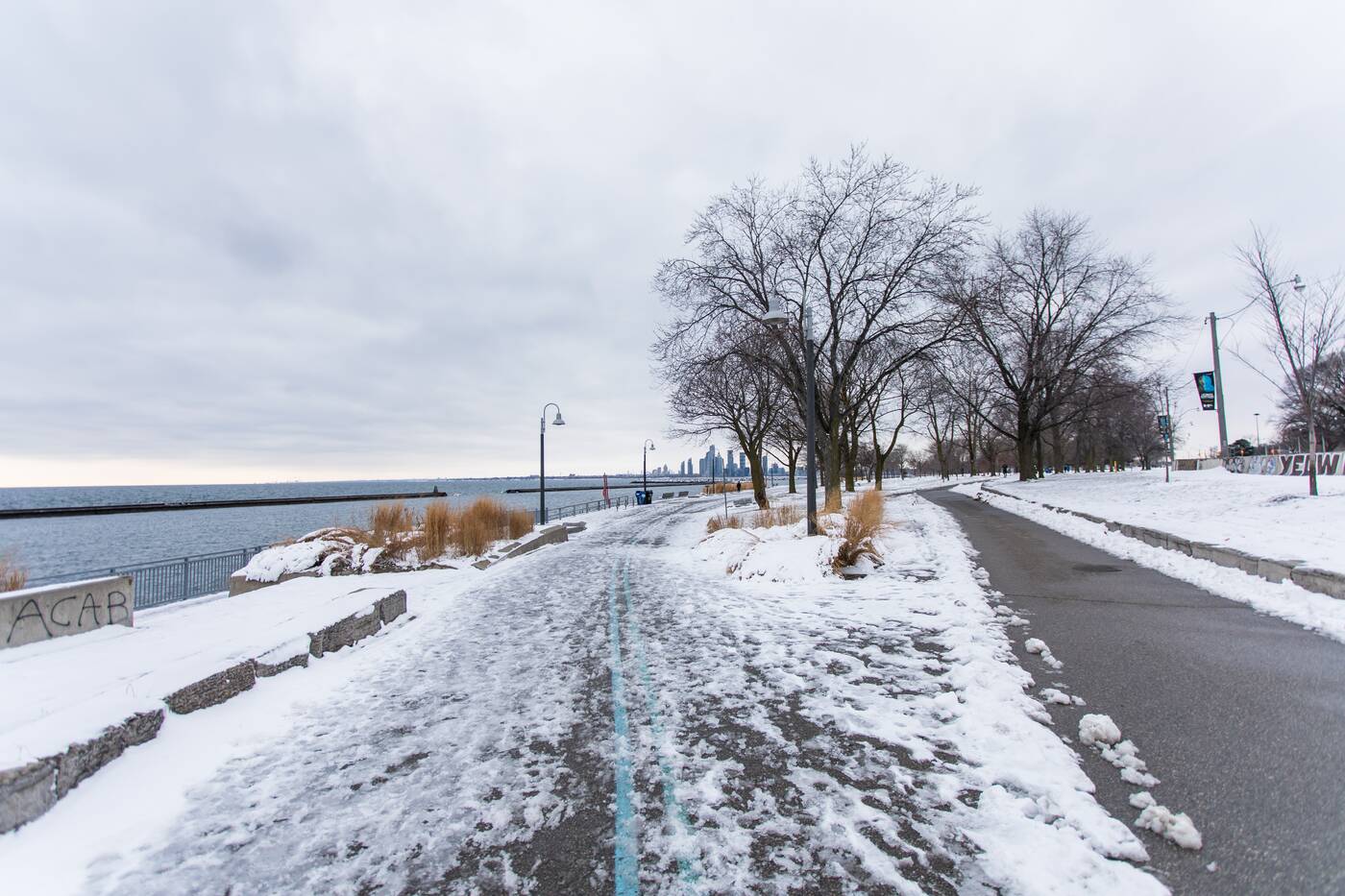 You can also choose to walk closer to the water with the other pathway.

The second pathway that follows a bit closer to the Lake is perfect for those who are out for a stroll and looking to take in the views of the water. 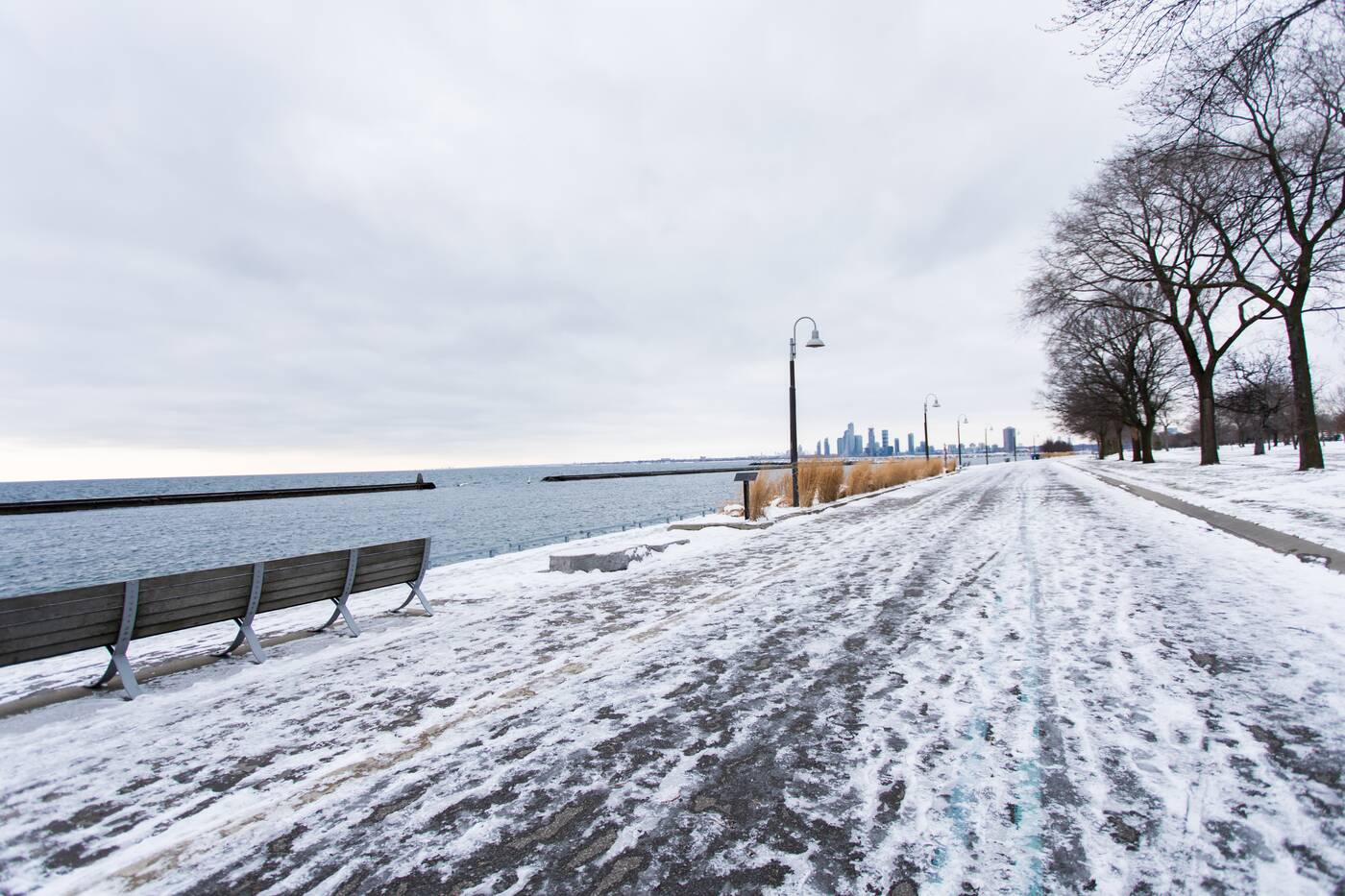 Just be careful as this pathway is a little less maintained in the winter than the trail that runs adjacent to Lakeshore Boulevard.

It's about as close to the Lake as you can get. You might even be able to spot the escarpment across the water on a clear day. 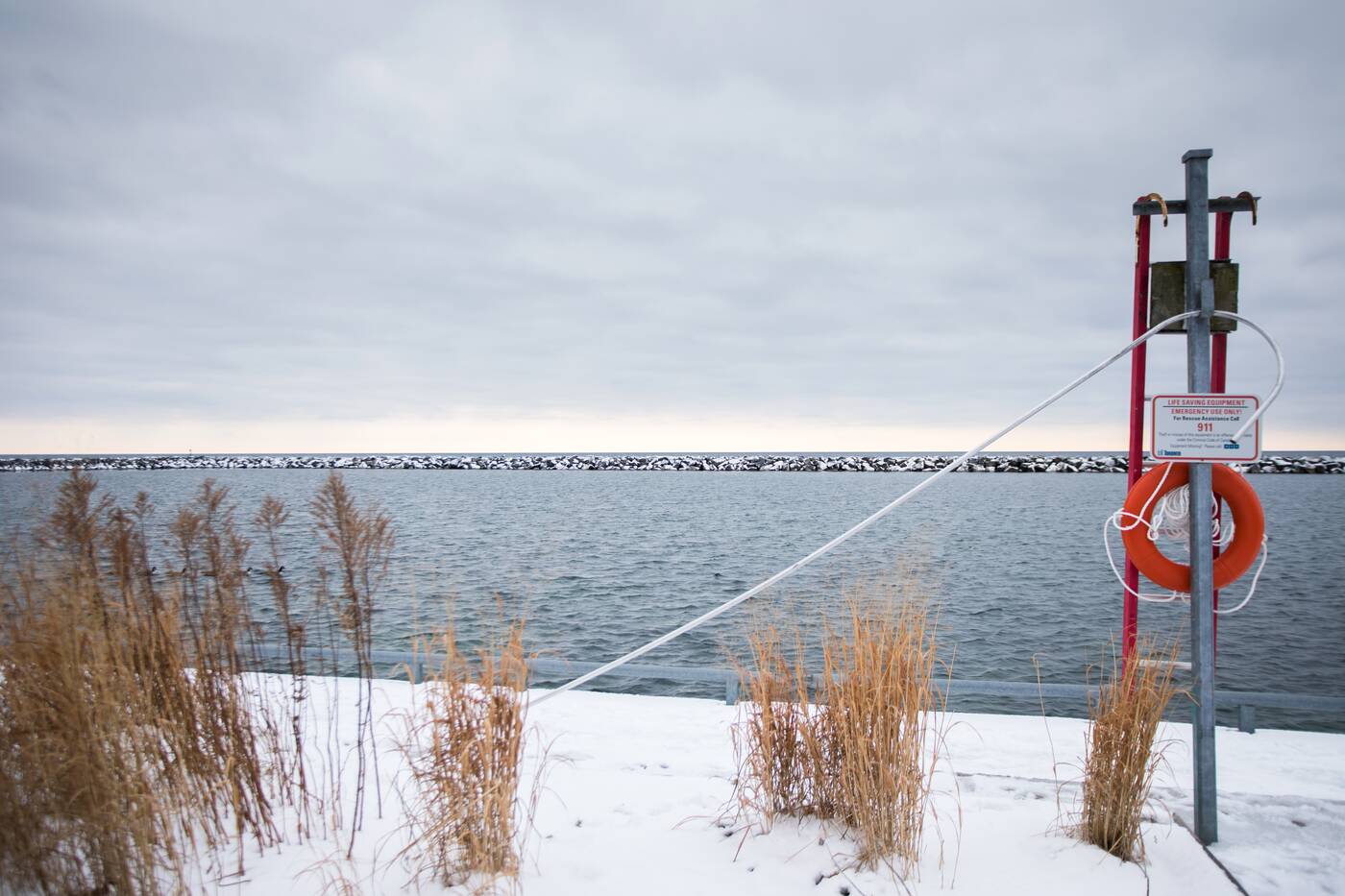 The second trail hugs the Lake, making for better views.

There is a lookout platform and plenty of coloured deck chairs for your viewing pleasure. 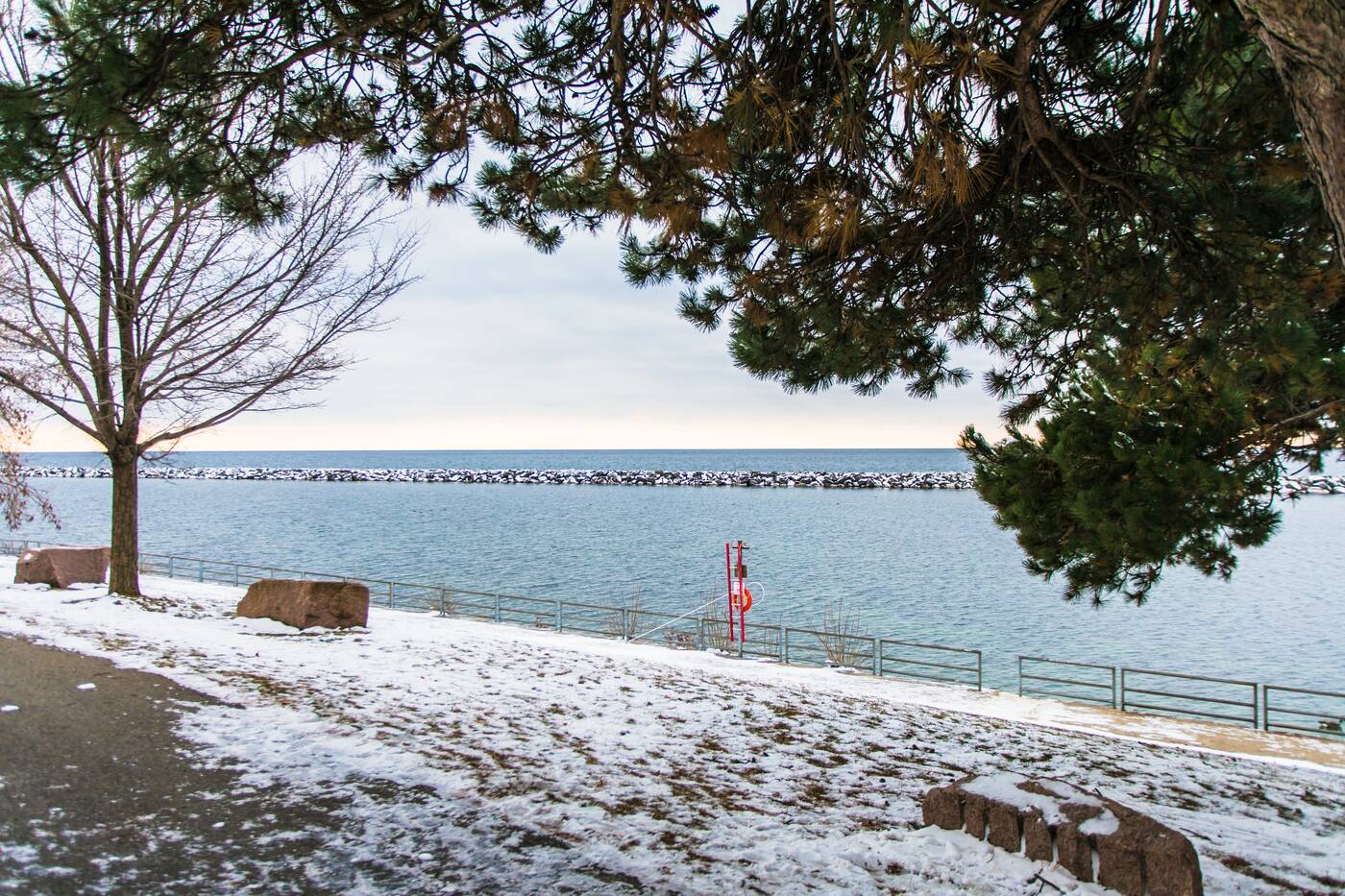 Marilyn Bell Park is located between Ontario Place and Sunnyside Beach along the waterfront.

The park is actually named after a local Toronto girl, Marilyn Bell who was the first person to swim across Lake Ontario when she was just 16 years old. 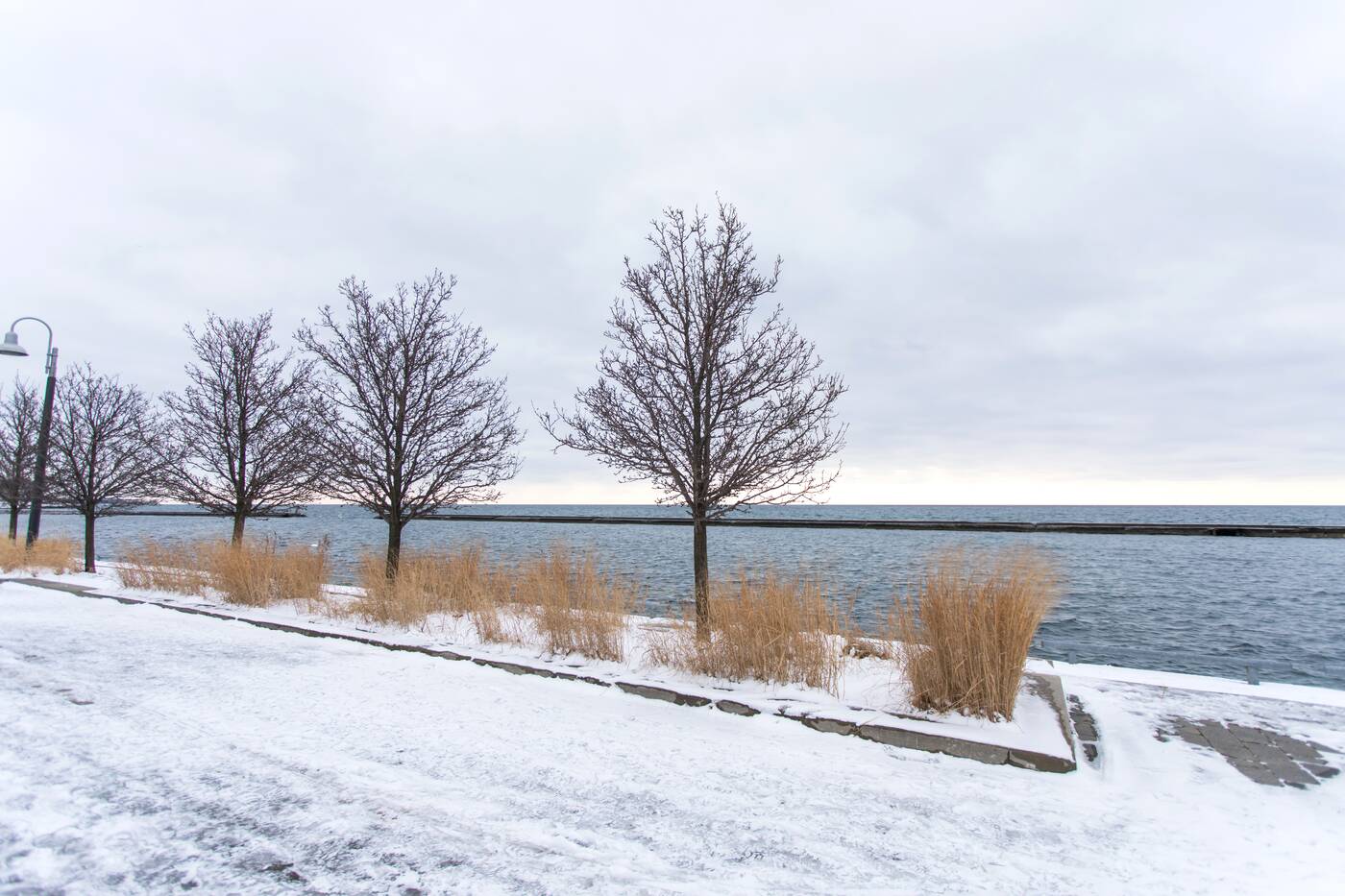 The park is named after the first person who swam across Lake Ontario.

She made the 52-kilometre swim in under 21 hours and the park was dedicated to her on the 30th anniversary of her swim in 1984. 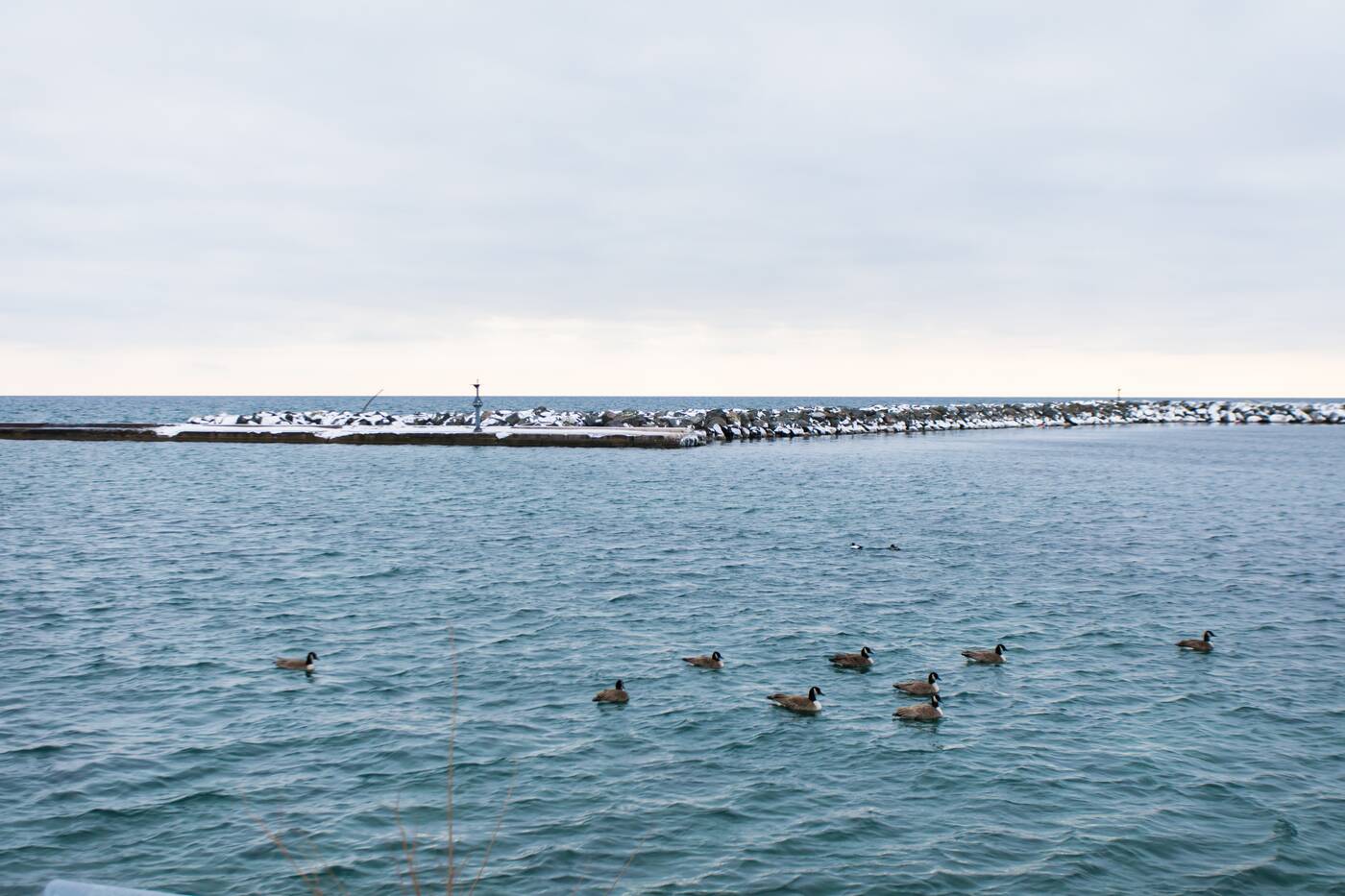 Lots of Canadian Geese can still be seen around this time of year in the water, as well as walking throughout the park.

Besides the pretty lakefront views, the natural area is covered in large and full trees which provide a whole lot of shade in the warmer months. 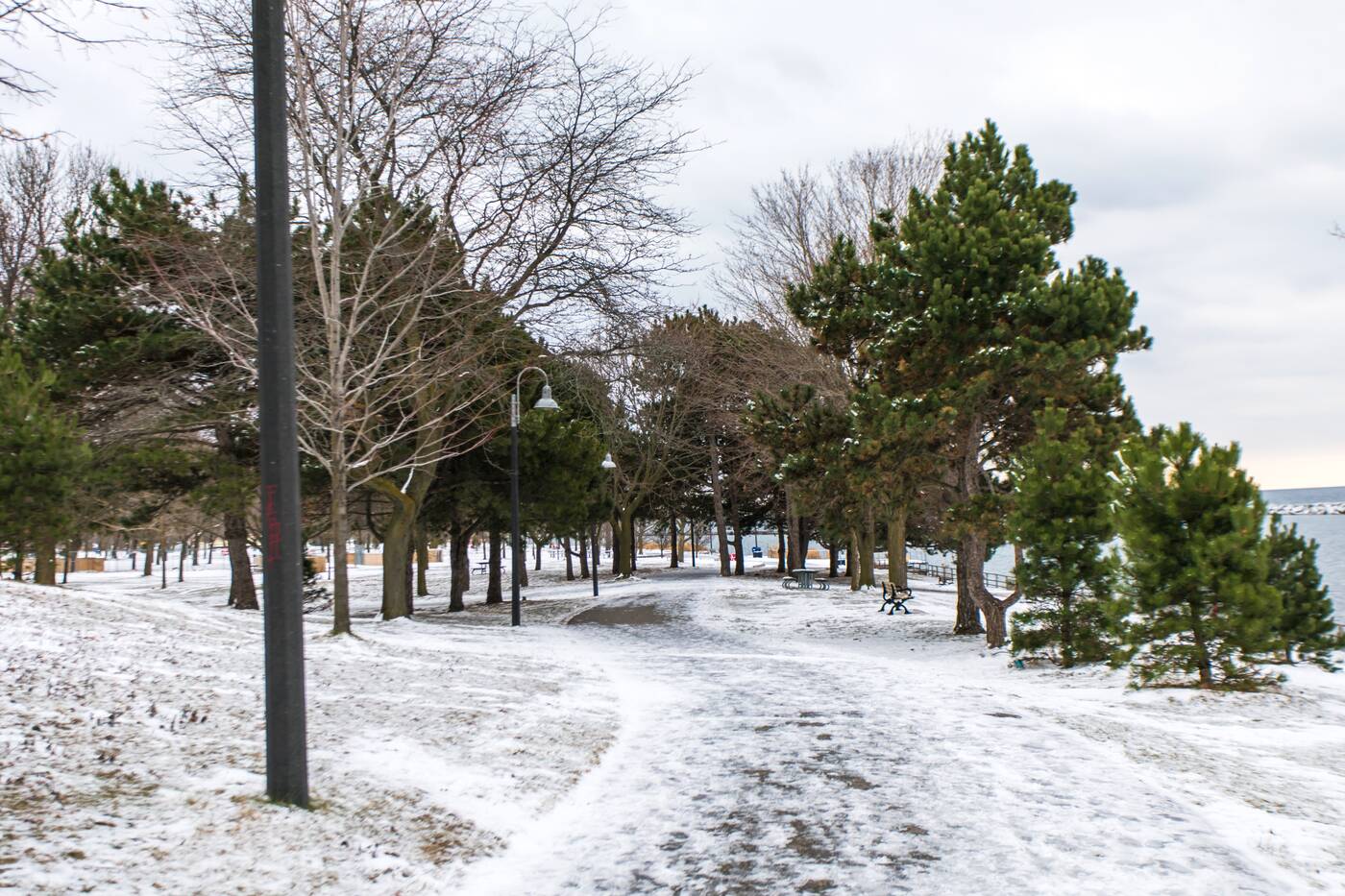 The trail is tree-lined in some sections.

The park is also one of the six disc golf locations in Toronto. The nine-hole course can be used year-round, you just have to bring your own equipment. 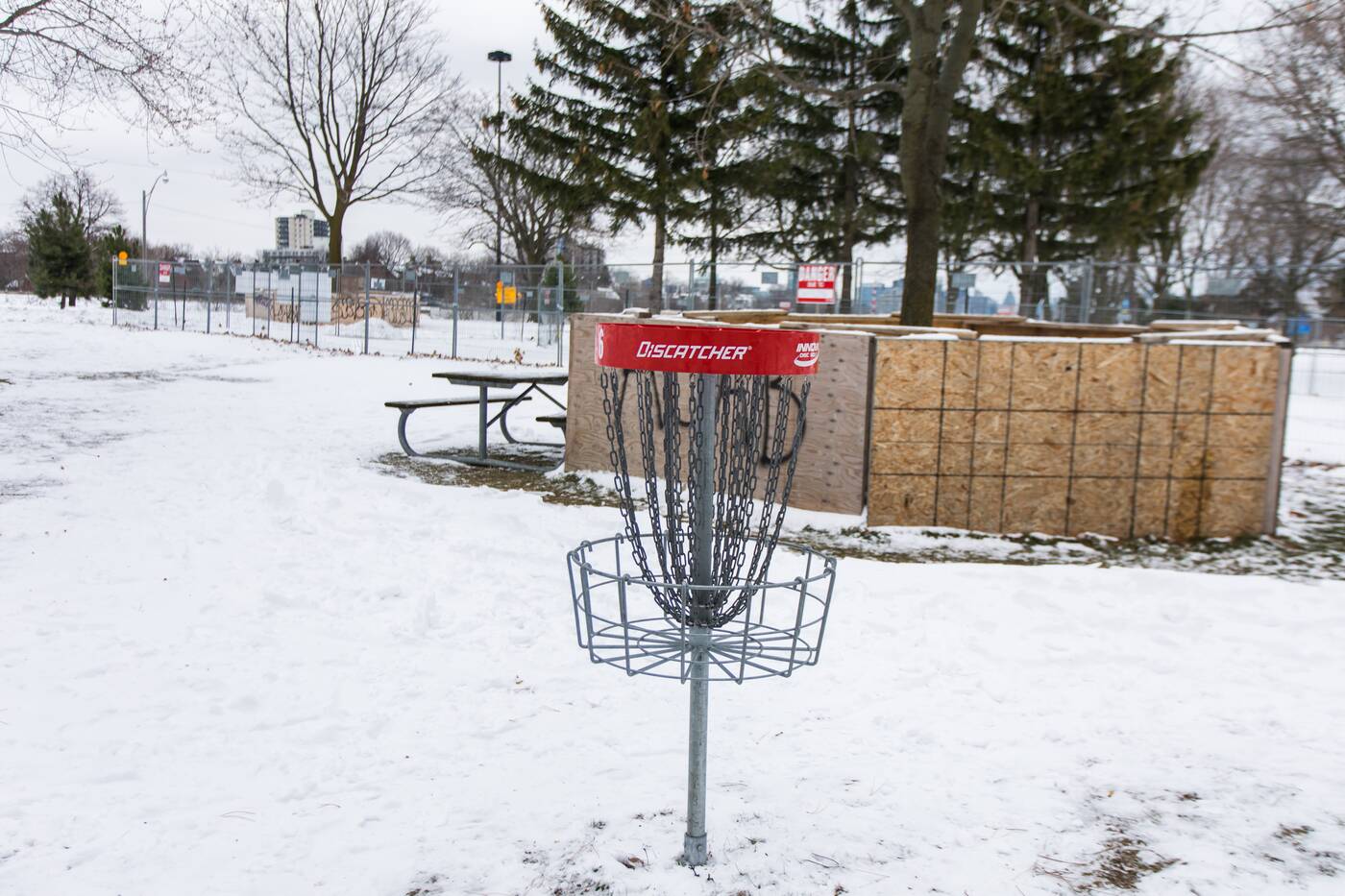 The Marilyn Bell Park disc golf course includes nine holes and can be used any time of the year.

If you continue to head east along the trail, you'll end up at Ontario Place and Trillium Park. 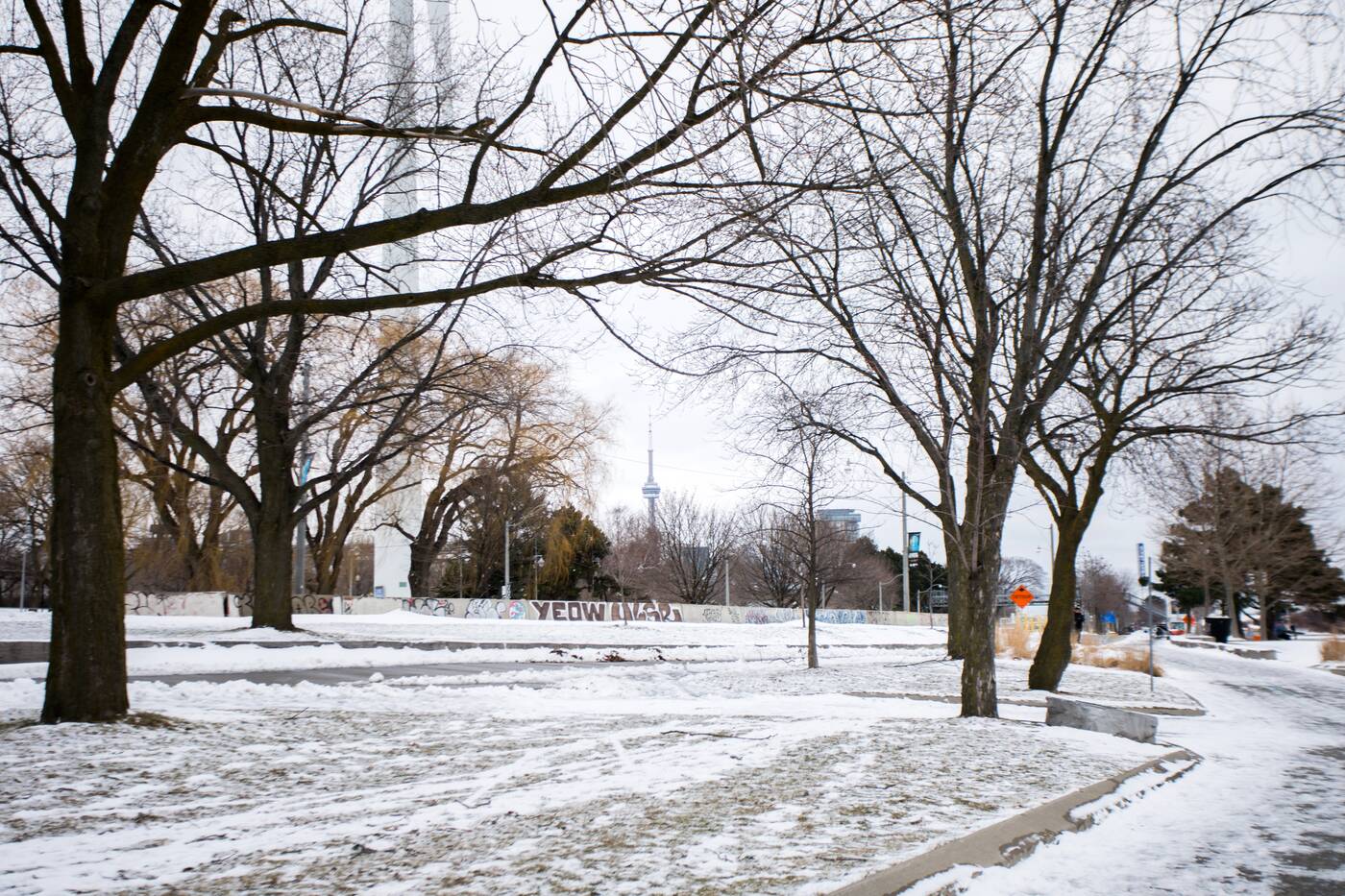 Views of the CN Tower can also be seen peeking through the trees as you head east.

Whereas heading westwards will lead you to Sunnyside Park and Beach. This is also where you can access a footbridge that leads across the Gardiner Expressway off Dowling Avenue. 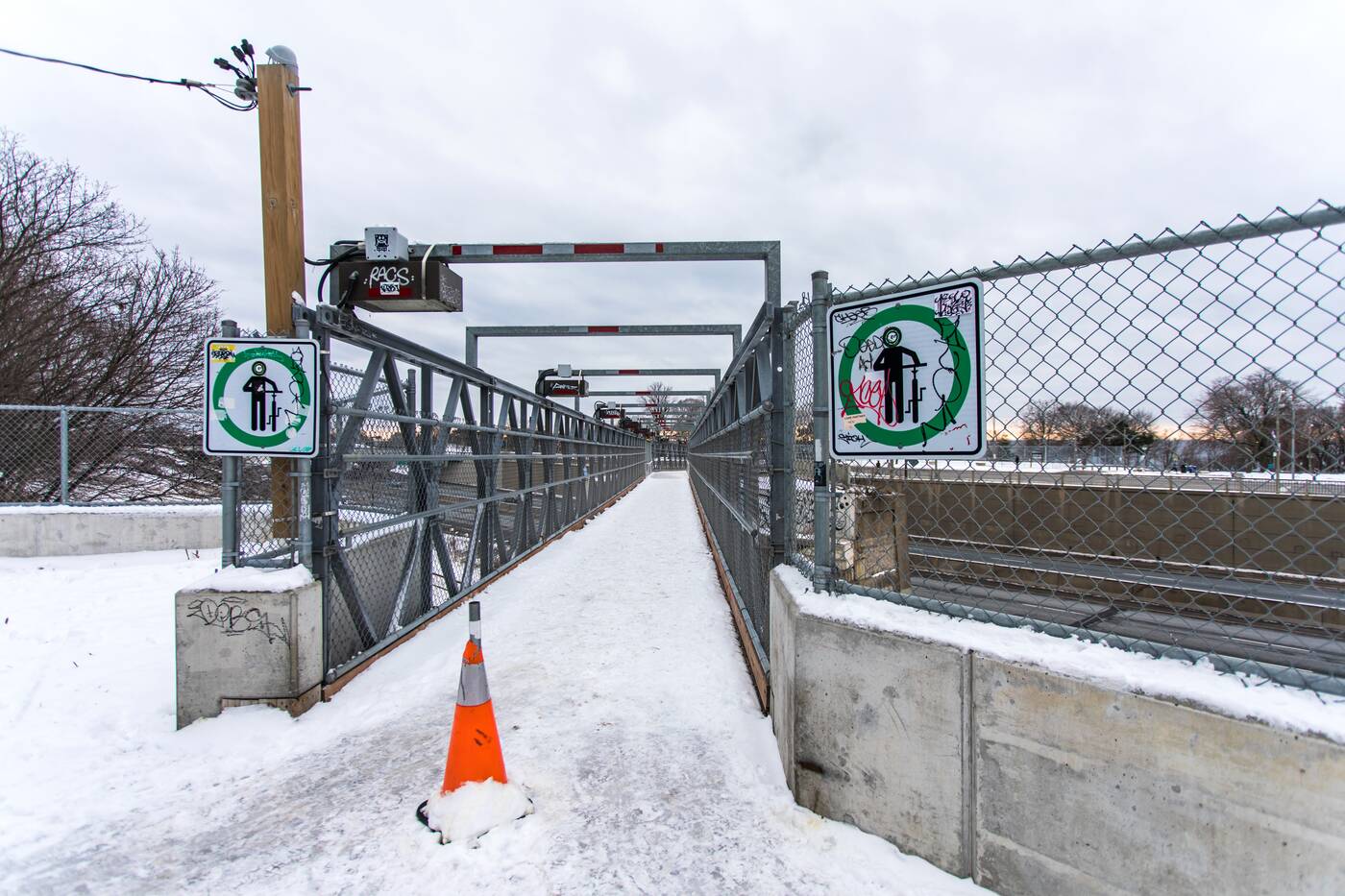