Any kid who spent time in Toronto during the 1970s, 80s and 90s surely fostered blissful, orange-soaked memories at Children's Village in Ontario Place.

Long before helicopter parenting and irresistible digital toys sapped the life out of growing up, it was a place to go and have real fun - skinned knees, rope-burnt hands and purple bruises were all worn with pride.

Designed by Eric McMillan after he argued the original design of Ontario Place didn't have enough appeal to young people, Children's Village opened in July of 1972 and quickly became the most popular destination within the park. 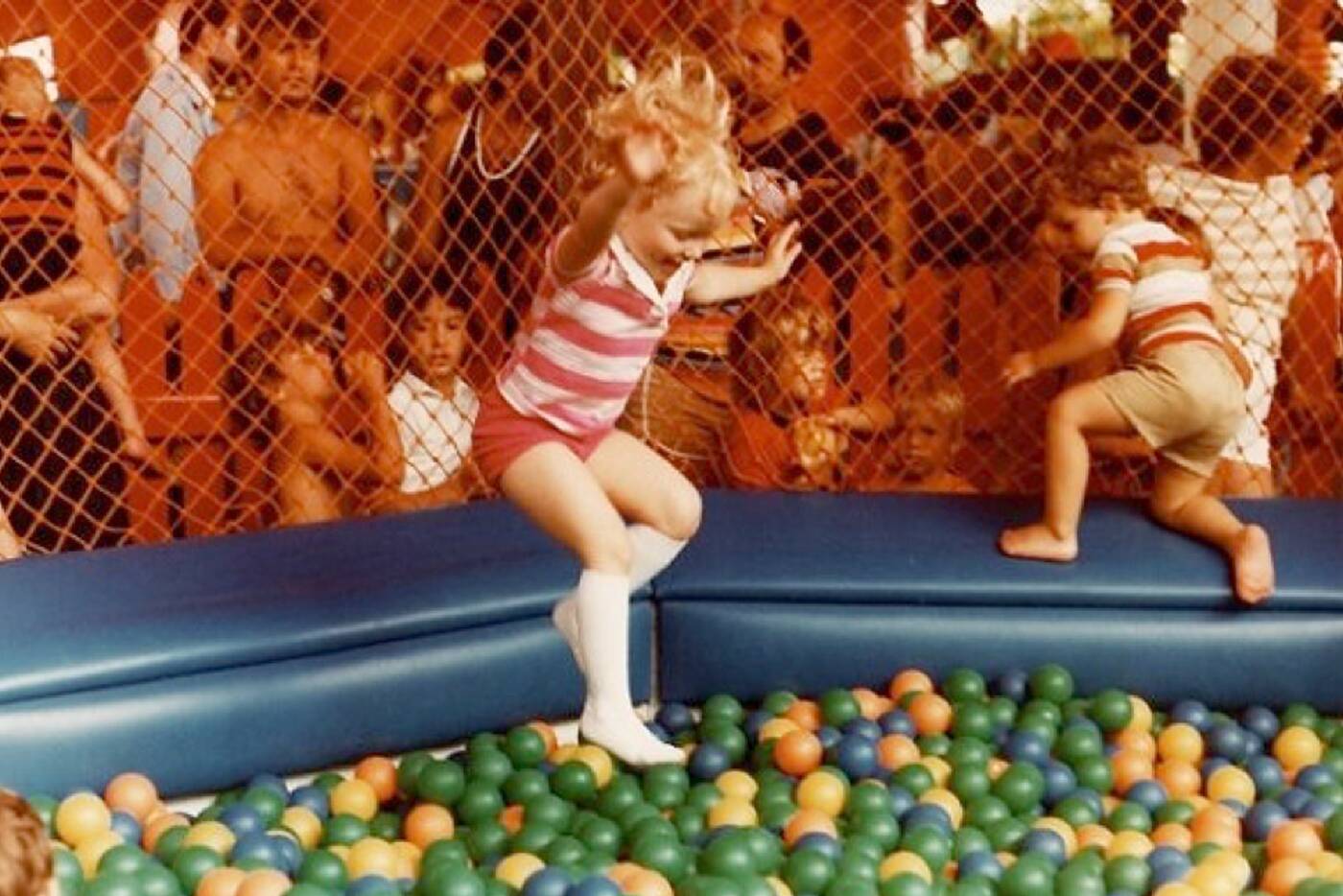 Kids loved to jump in the ball pit.  Photo via Toronto Archives

With such daring delights as the Punching Bag Forest, King of the Mountain, Snake Tube Crawl and the world's very first known ball pit (here called Ball Crawl), McMillan's work influenced play parks around the world (including Sesame Place and Parc de la Villette), and he became known as "the father of soft play."

As noted by Nathan Storring at Urban Space Gallery: "Children could test their skills in front of their parents and peers. Unlike amusement rides, which offer entertainment to be passively consumed, the Village relied on children's own drives to run and scream, to build things and knock them over, to perform and safely flirt with danger." 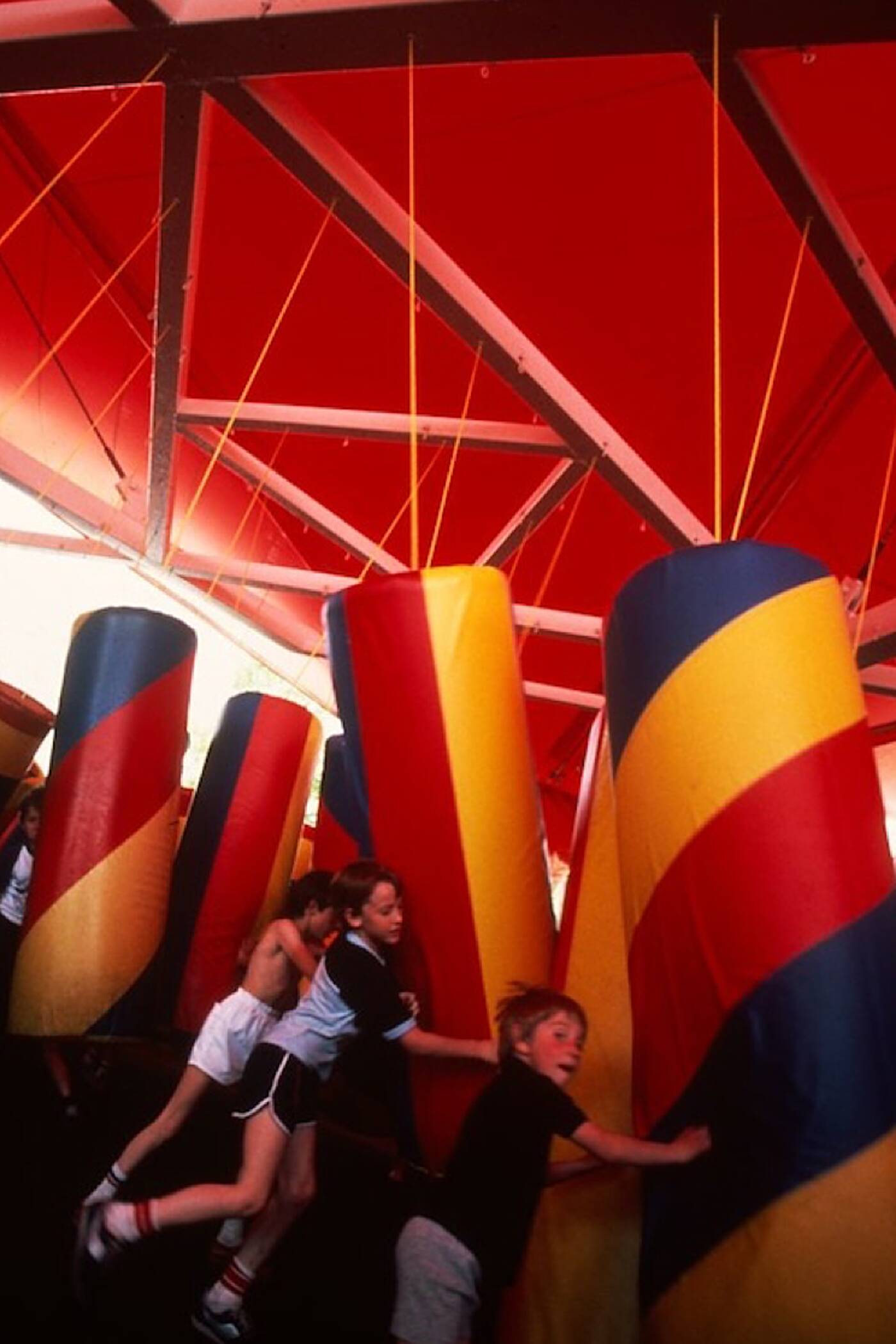 The Punching Bag Forest was a hit. Photo via Toronto Archives

One year later the success of Children's Village allowed McMillan to extend it with the creation of the Water Play area. 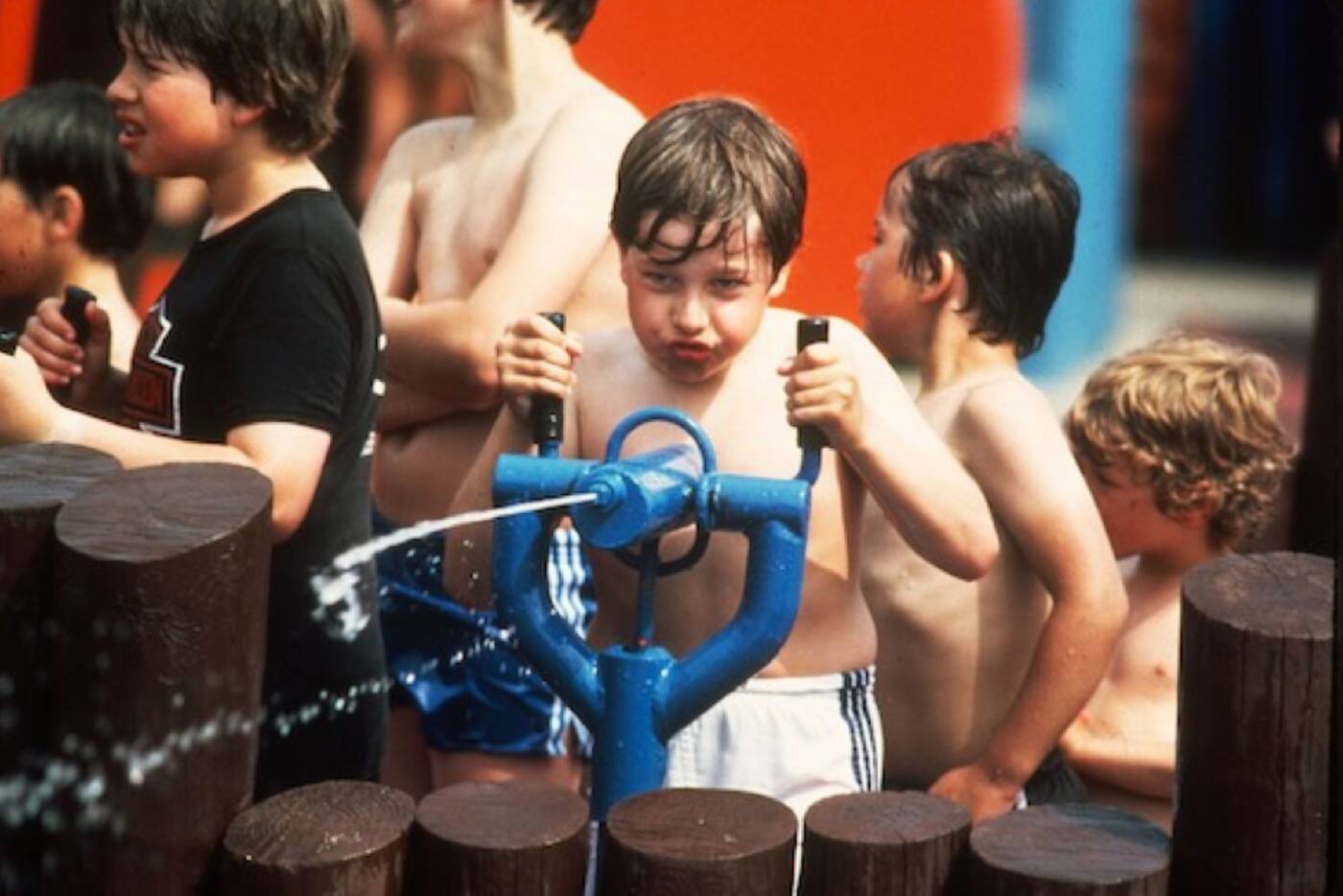 A waterpark was a prime attraction at Ontario Place. Photo via Toronto Archives

Several reels of home movies shot in and around Children's Village in the mid-1970s illustrate the story better than words ever will.

In 2002, Children's Village was unceremoniously stripped and replaced by junior midway rides, the sort of low-grade, greasy hot dog garbage you see in grocery store parking lots during summertime.

Even worse was the fact that directly across the street was the CNE, where kids could ride at least medium-grade crappy rides.

Over the years Ontario Place has seen gradual changes.

The music venue Molson Canadian Amphitheatre replaced the old forum in 1995. The amphitheatre became the Budweiser Stage in 2017.

In 2012 Ontario Place closed for redevelopment. Park attendance had been gradually falling since a peak of 2.5 million guests in 1971, the year Ontario Place opened. 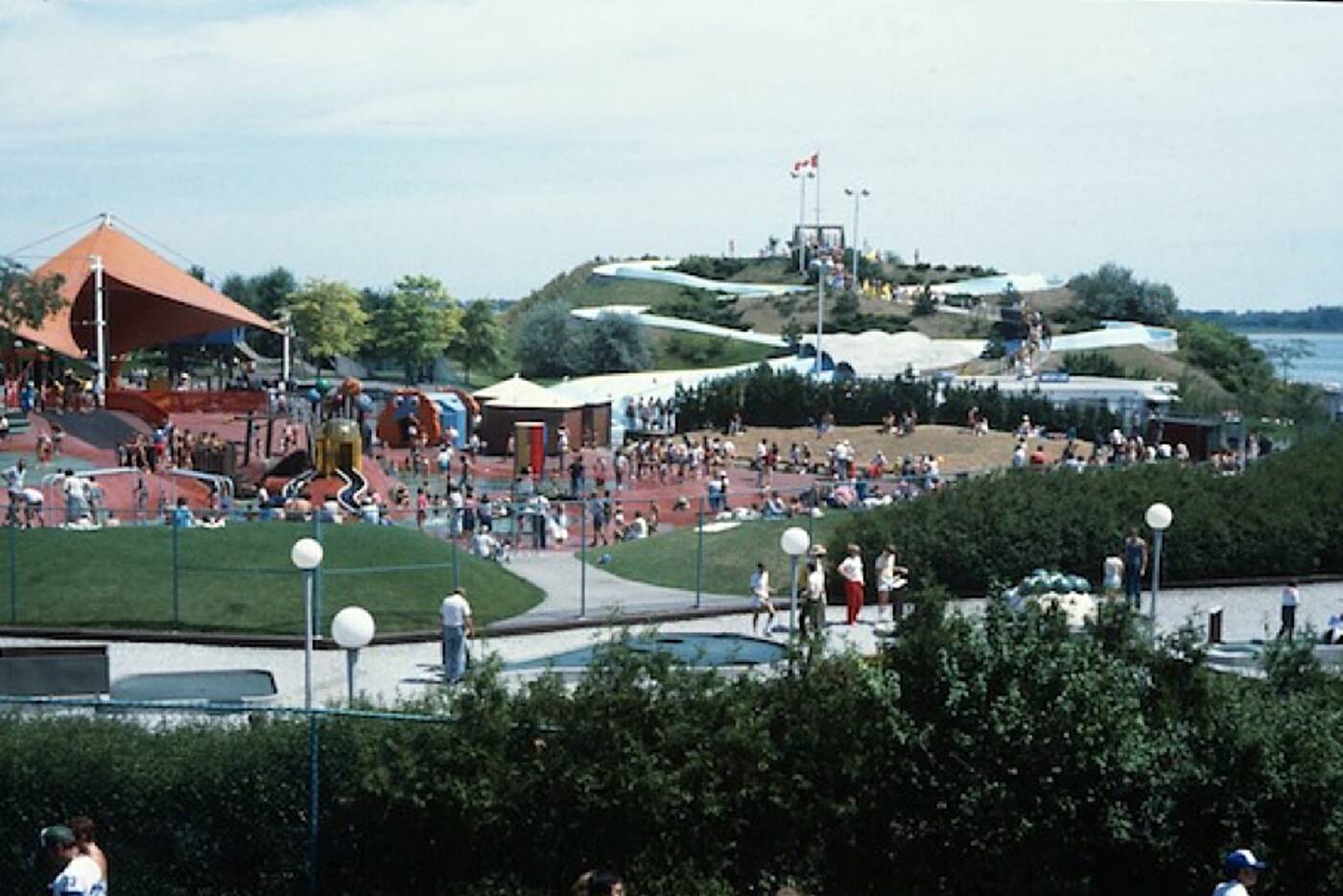 The plans included a park, residential and commercial development along with possibly a hotel and resort.

There was even talk of a casino or condos but those ideas were put to rest in 2019 in favour of anything from sport and entertainment landmarks to new public spaces, parks, recreational facilities and retail uses. 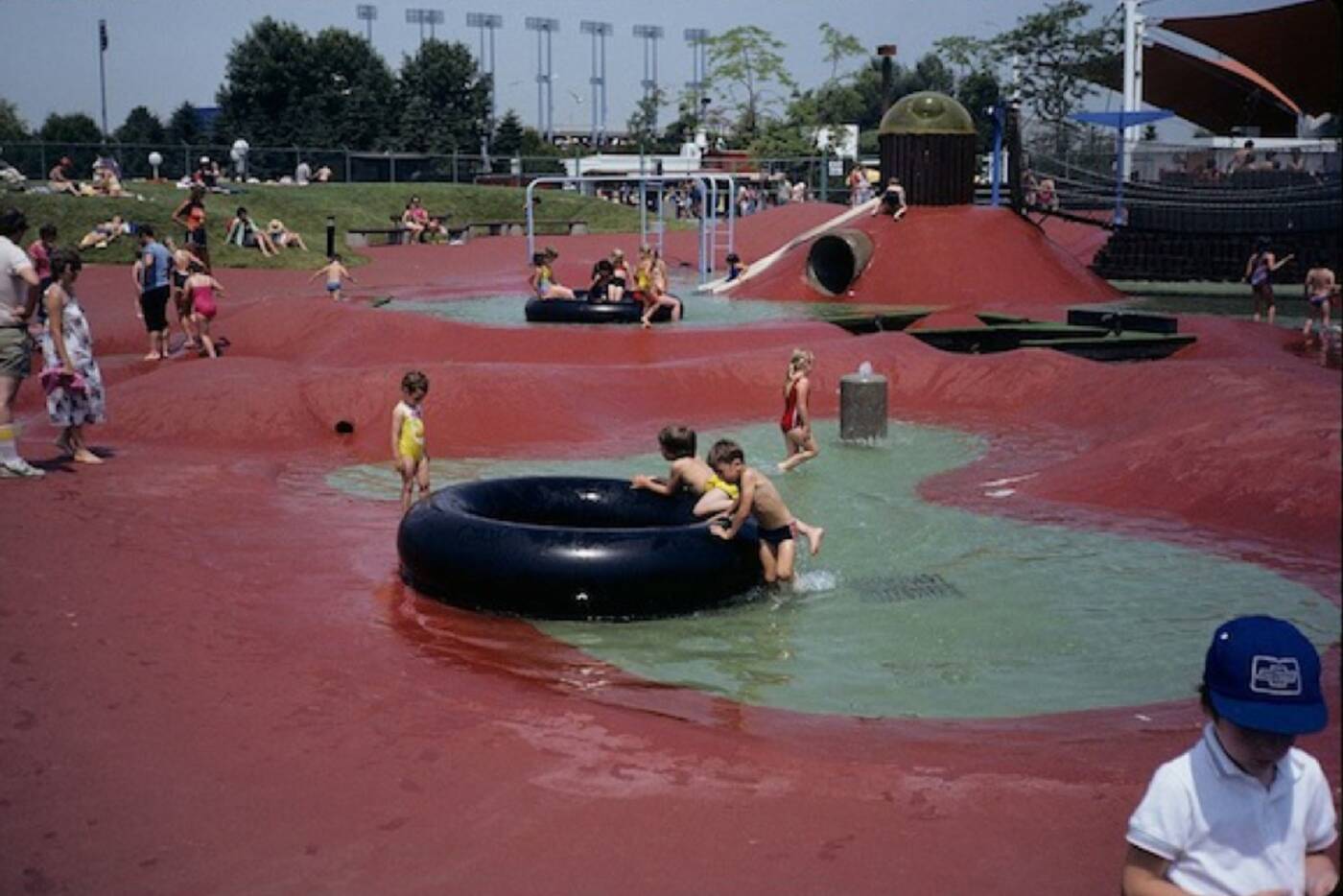 Ontario Place did get part of the 2012 dreams realized in 2017 with the opening of the Trillium Park and the William G. Davis Trail.

The latest approved plans for Ontario Place will see the site get an all-season adventure park, a revamped Budweiser Stage and a whole lot more.

Public consultations about the plans are expected to conclude sometime in 2023.