Ontario Place will become "a state of the art public park" under revitalization plans unveiled today by John Tory, the chair of the revitalization panel charged with repurposing the land occupied by the shuttered waterfront site.

The park, which will include some residential and commercial development, will be accessible in all seasons and form "a new backyard for Ontarians," Tory announced in a press conference at Queen's Park. Designs and renderings are still a way off, but the panel emphasized the need to create a vibrant waterfront destination like those found in other major cities.

According to the report, the park won't just be green space. The plans recommend a year-round music venue like the old Forum and several shops and artist studios. A hotel and resort is also on the cards but the report says the panel are specifically against "a wall of high-rise buildings." 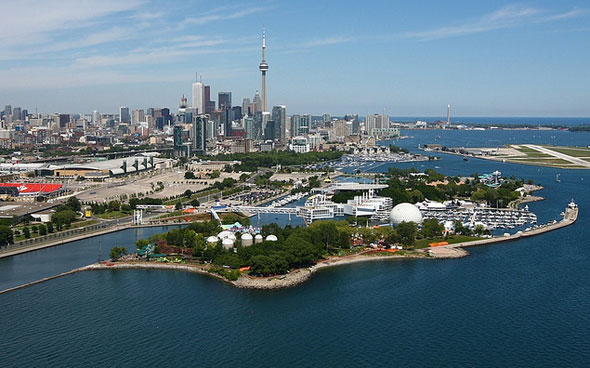 Ontario Finance Minister Dwight Duncan announced the closure of the park until 2017 and the demolition of several feature including the famous Cinesphere earlier this year as part of money-saving measures by the province. Park attendance had been gradually falling since a peak of 2.5 million guests in 1971, the year Ontario Place opened.

At the press conference, Tory suggested the Cinesphere and famous features like the pod pavilion could be renovated and incorporated into the final design. The former Ontario PC leader stressed the need for sustainable principles and green materials for any new buildings

After the decision to close was made public, there were suggestions the park become a waterfront casino or the site of condo developments. The province nixed the casino idea before the release of today's report. Previously, Tory said improving access to the waterfront would be the revitalization panel's top priority. A suggested public promenade around the edge of the site would appear to fulfill part of that idea.

The total cost of the project is still unclear but Tory said the cost of adding a streetcar connection to the park would be in the region of $100 million. He also said the bulk of the money is likely to come from private interests and philanthropists interested in acquiring naming rights, not higher levels of government.

The decision whether to proceed with the plans outlined in the report now lies with the province.

So, what's the consensus? Is a park a good way of repurposing this prime waterfront real estate post swan boats and water slides? Is there anything that could be added or removed to improve the overall proposal. Speak up in the comment thread.