Williamson Park Ravine is the only one of the four that has the designation of being an environmentally significant area. 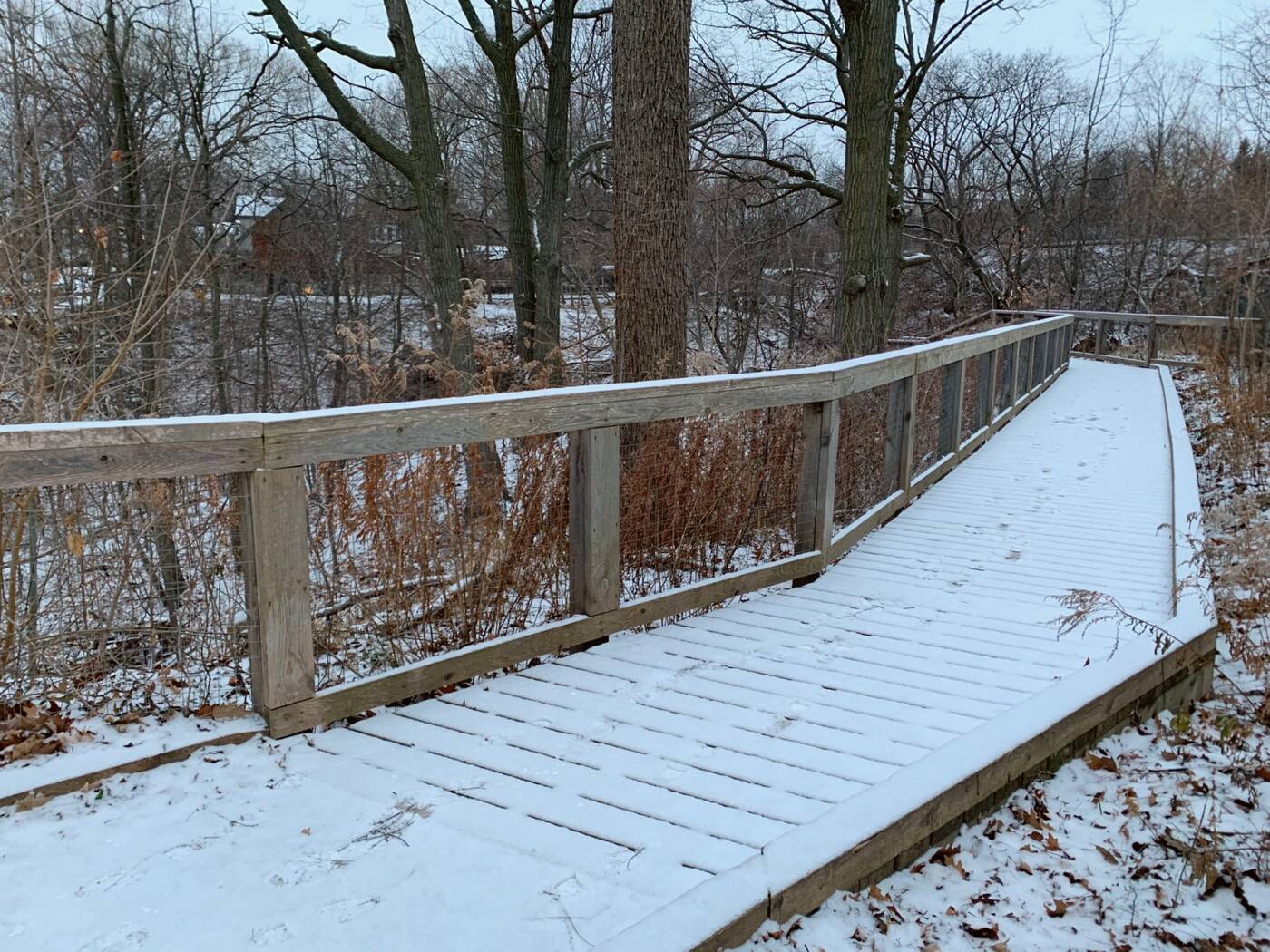 You'll easily spot the Williamson Ravine entrance due to the wooden boardwalk that leads into the park.

Nestled in a quiet residential community near Gerrard and Woodbine, a long wooden staircase leads down into the natural area of deciduous forest. 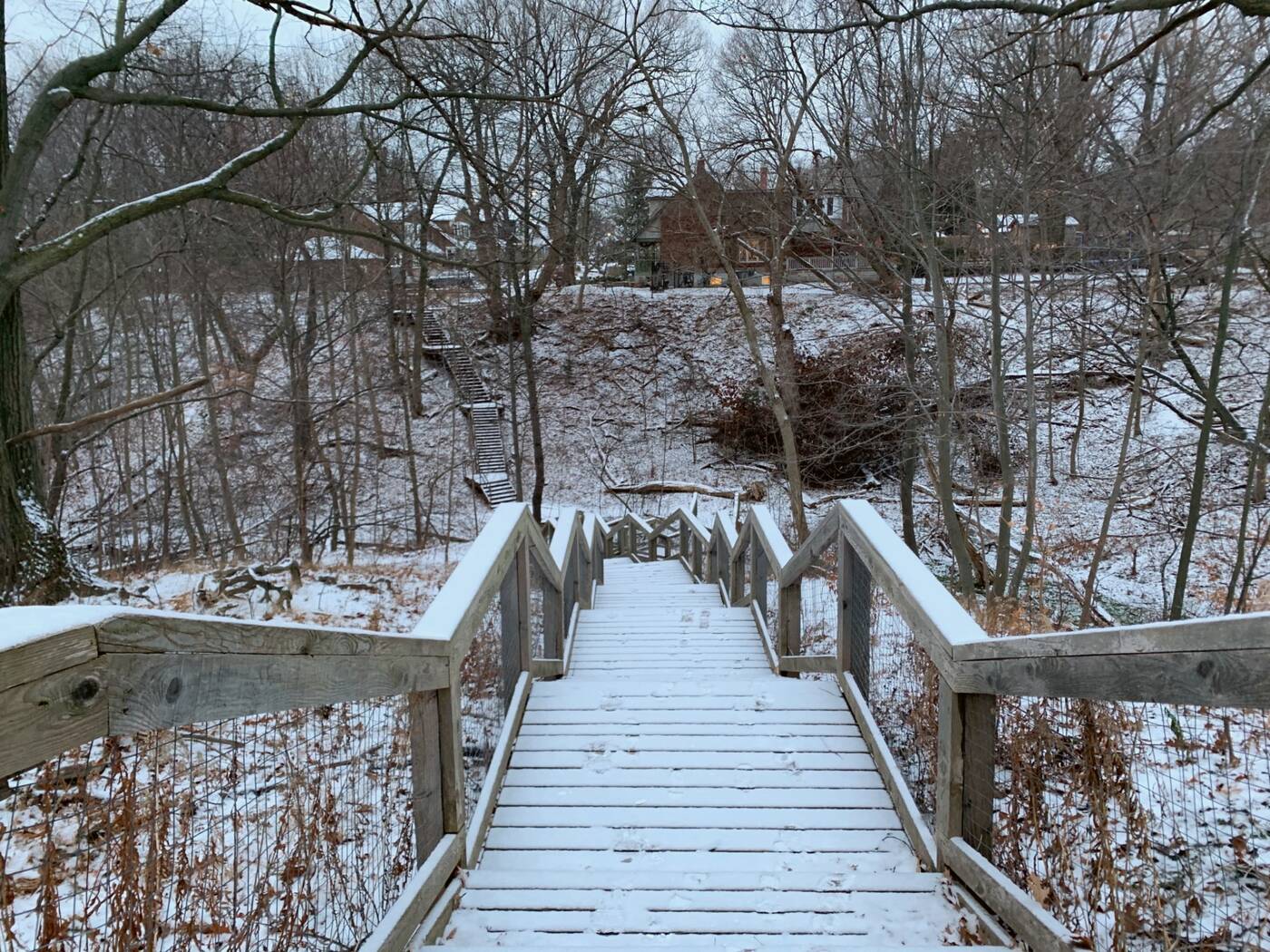 Surrounded by quiet residential streets with family homes, the park is mostly known to the locals in the area.

Small's Creek flows through the ravine before draining into Small's Pond, of which it's the largest tributary.

The creek is one of many streams that once flowed through the city, but due to development was entirely or partially buried underground. 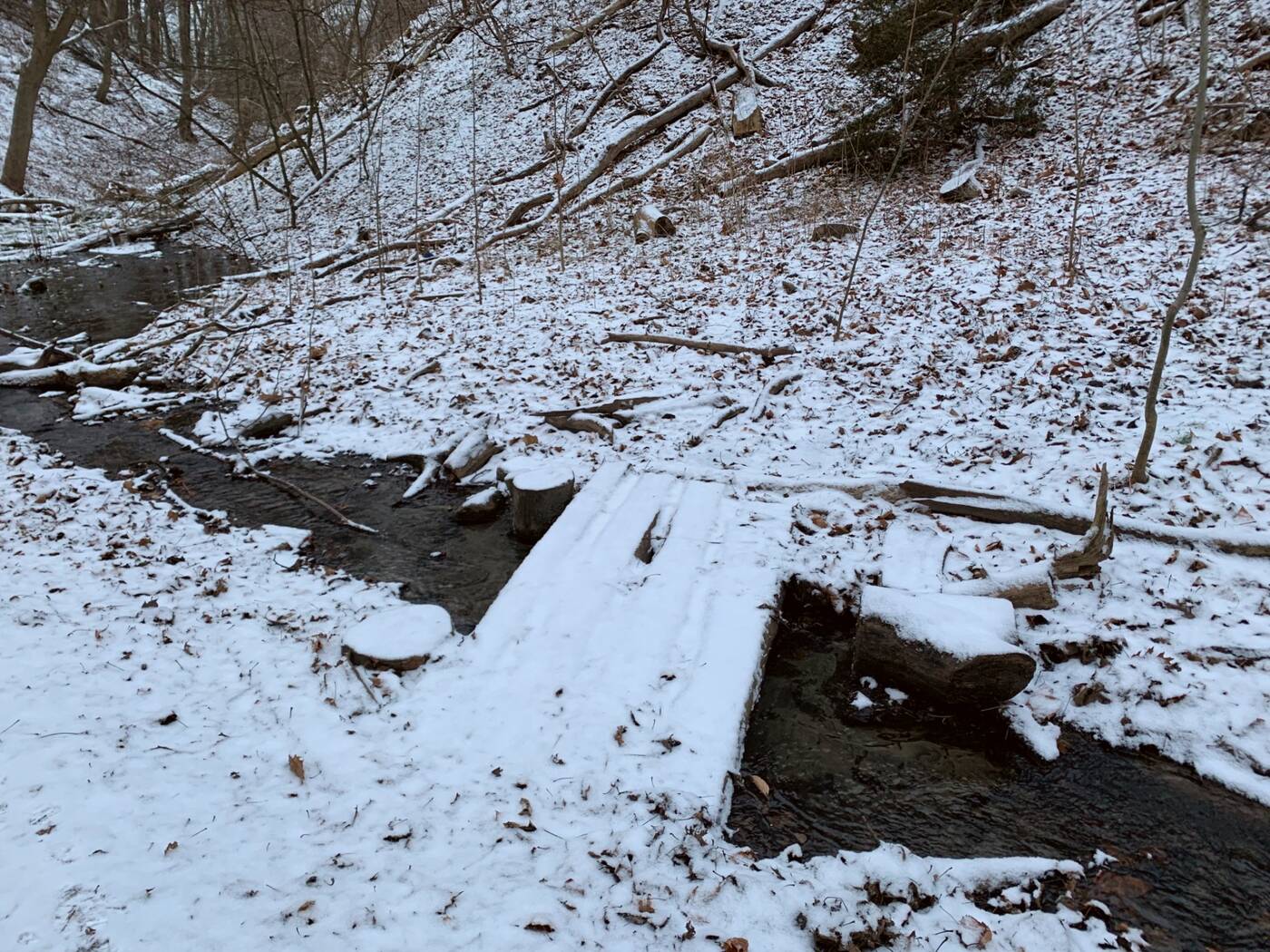 Wooden planks and makeshift boardwalks have been laid down throughout the ravine making it easier to navigate.

It's visible at certain times of the year at the four ravines throughout this area, though. Just be careful where you step while at Williamson Park as it can be tricky to tell where the river begins and ends, especially when covered in snow. 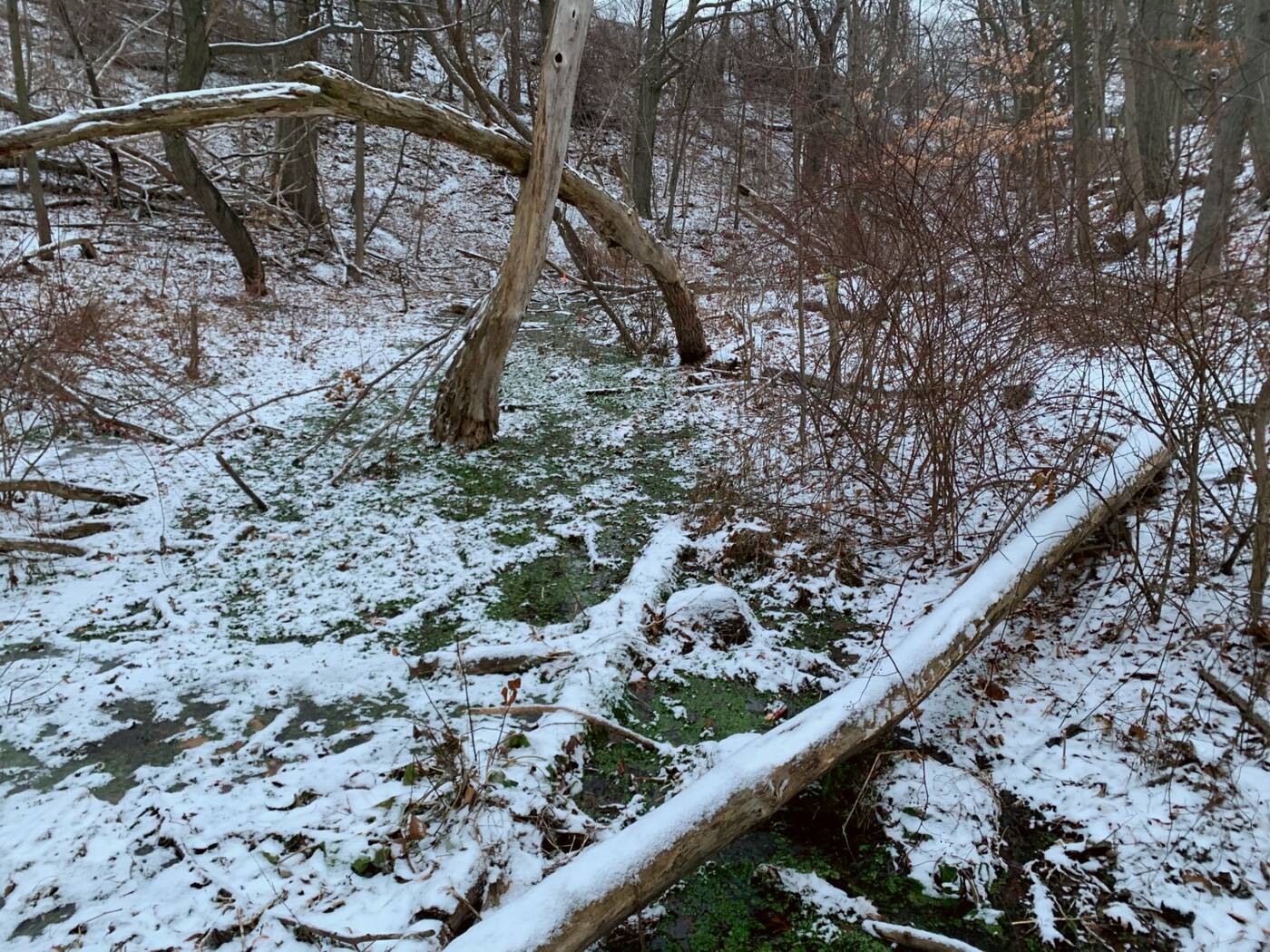 The partially buried Small's Creek is covered in moss and snow around this time of year.

Wooden planks have been laid down between the ravine slopes beside the creek so that visitors can make their way through the area. 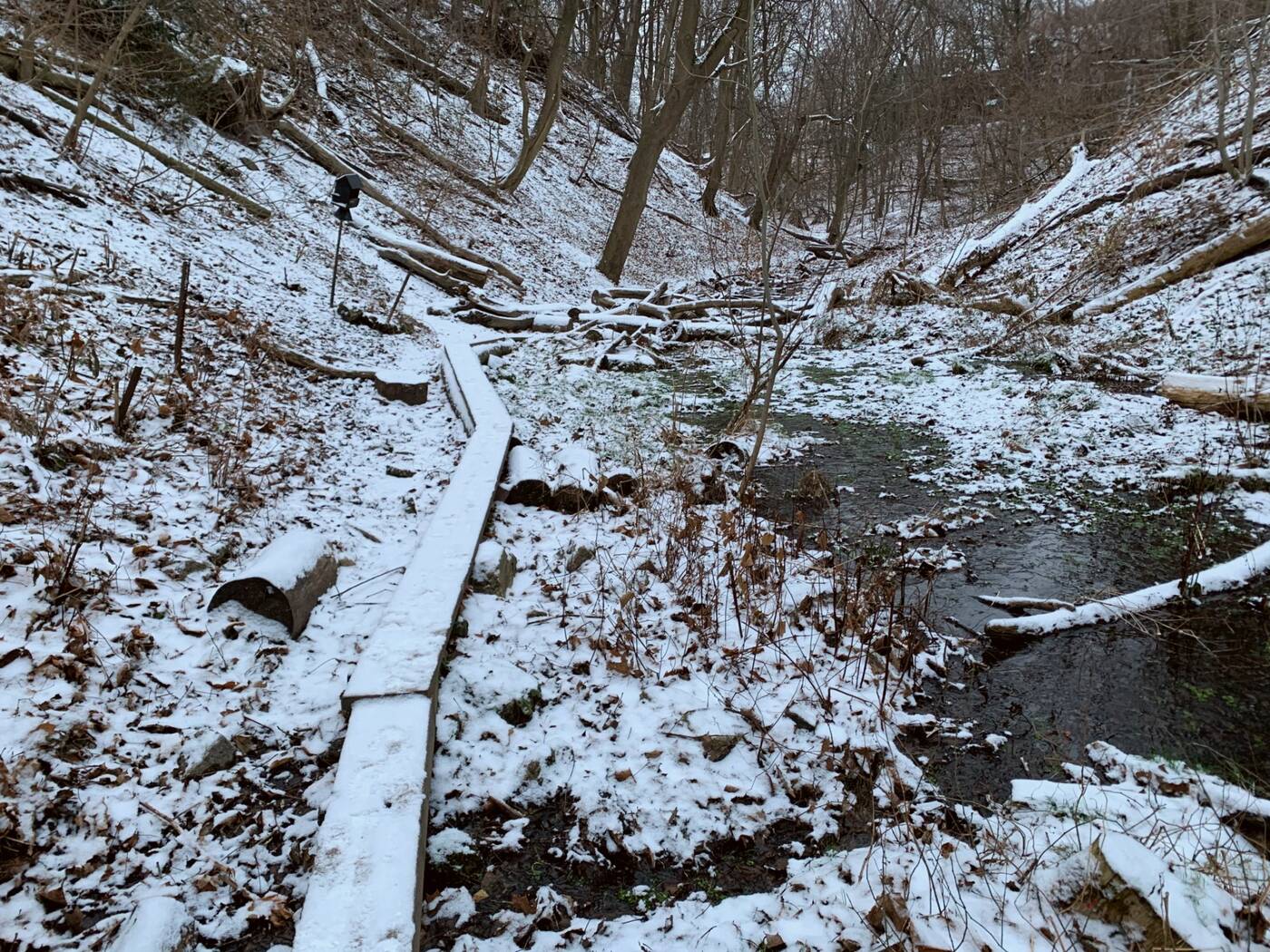 The rustic pathway follows alongside the creek for the entire duration of the walk.

Since the hike through the ravine is a bit on the shorter side, it's a good idea to continue your hike through another park within the Small's Creek ravine system. 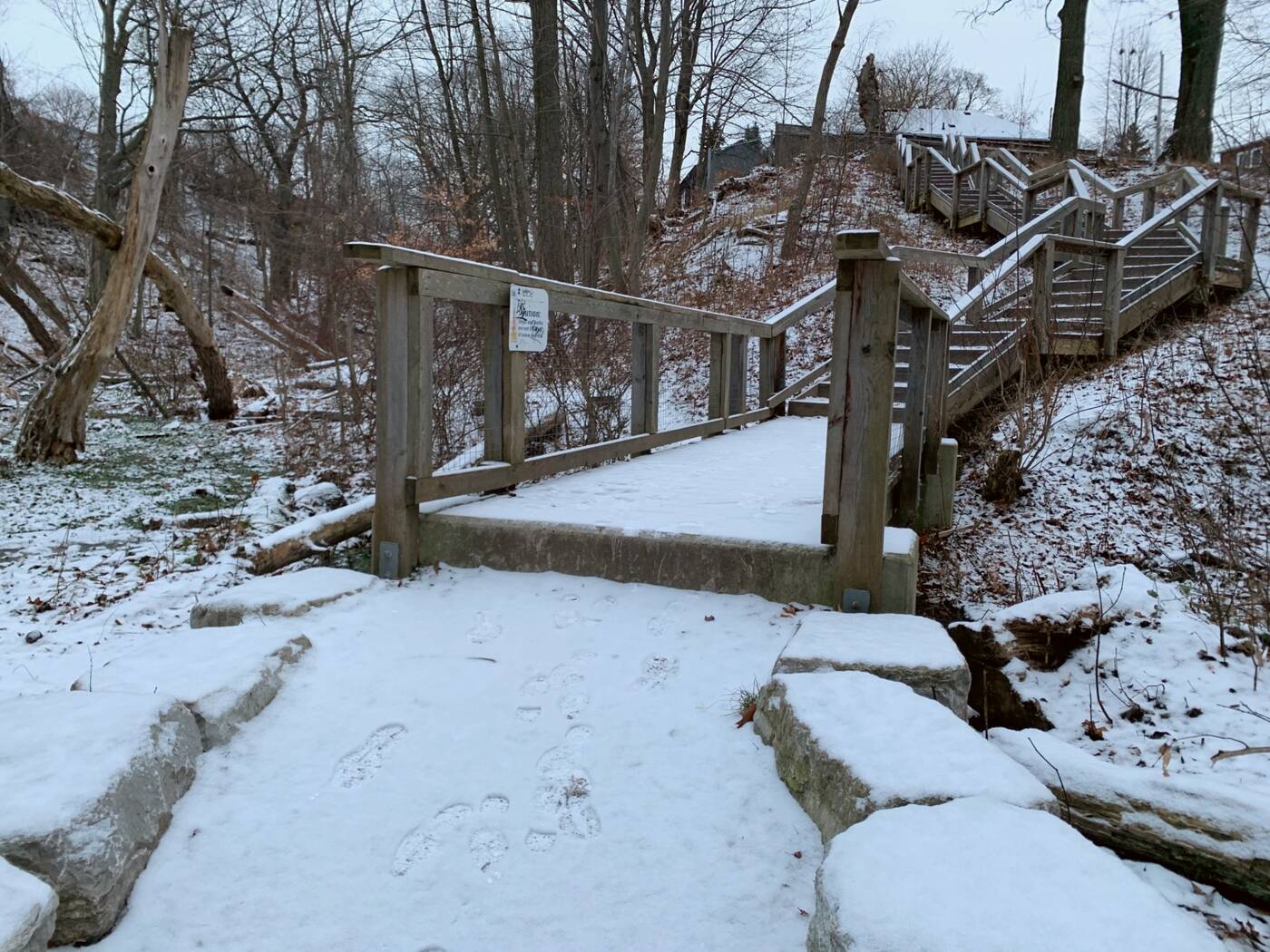 The park is an environmentally significant area meaning it provides habitats for rare and vulnerable plants and animals.

Merrill Bridge Park is a great add-on, located just a 10-minute walk away. You'll have to make your way over on the street as the two ravines are disconnected by train tracks. Just head up to Woodbine Avenue to get to the other side of the tracks. 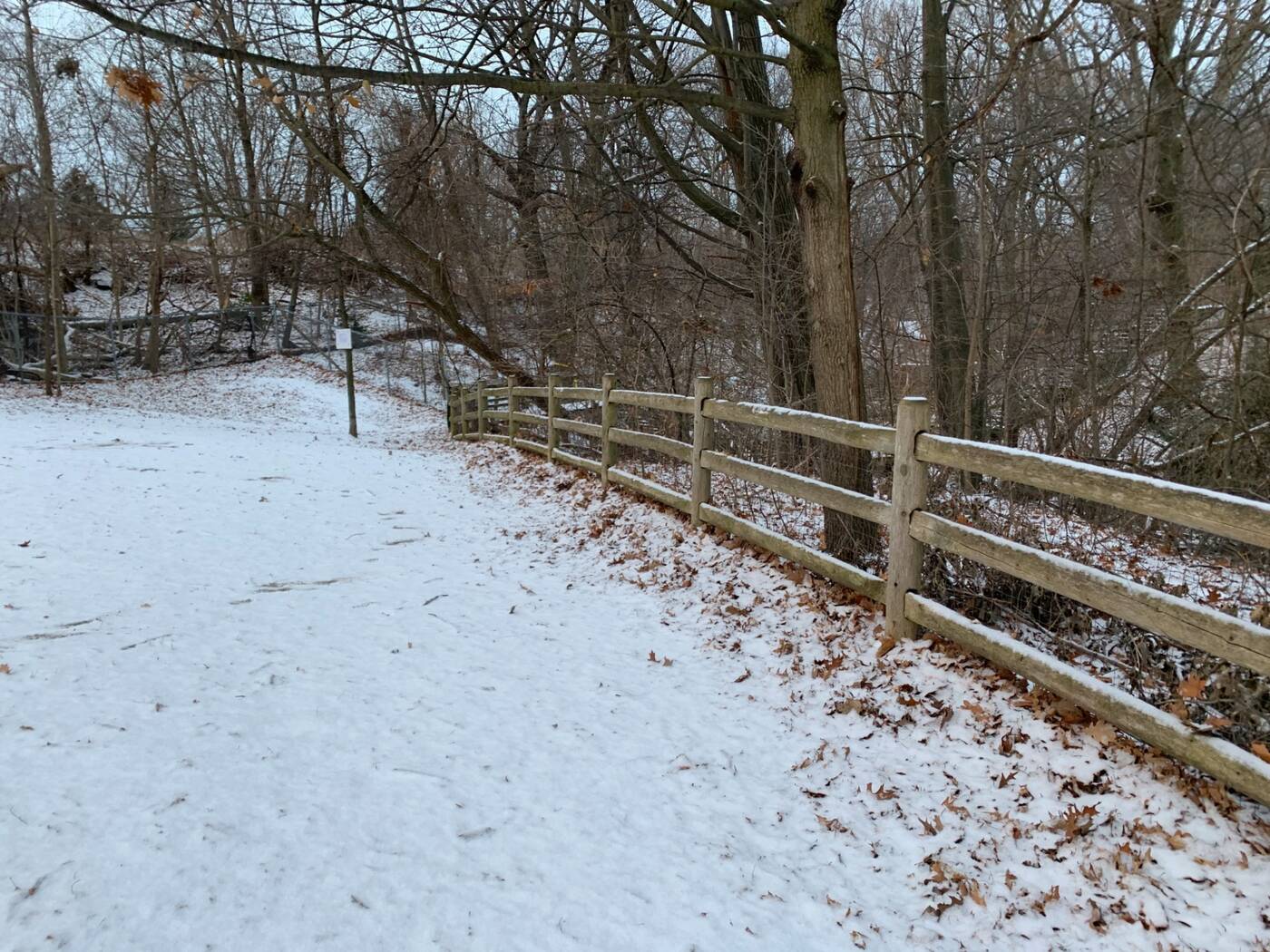 There's a large open dog park at the top of Merrill Bridge Park. 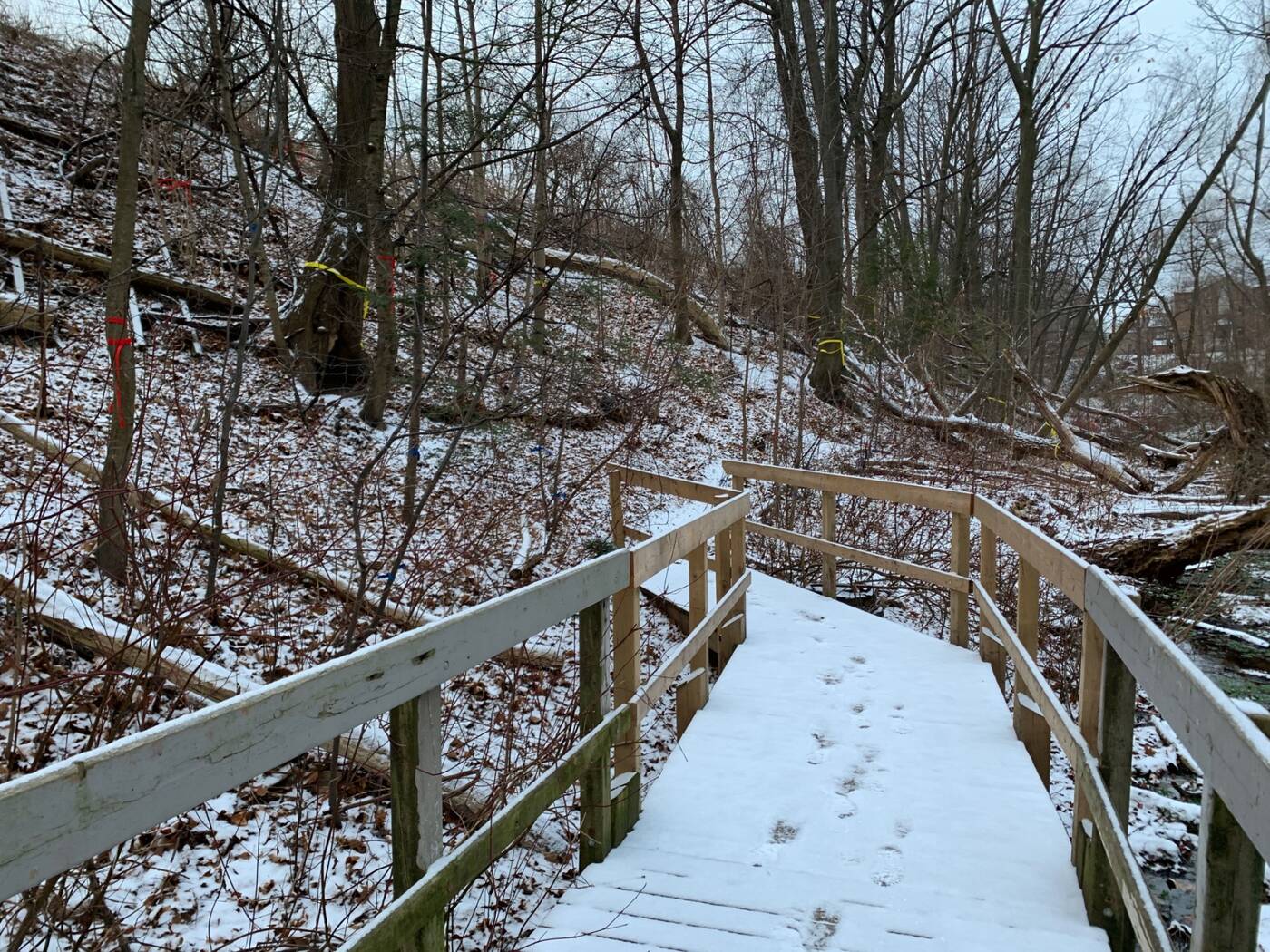 Just like at Williamson Park, a boardwalk leads into the forest trail.

There are also colourful ribbons around a lot of the trees in the area. A sign on a tree at either end of the park will tell you that these mark the trees that are at risk of being cut down due to a potential Metrolinx expansion that's said to begin in 2021. 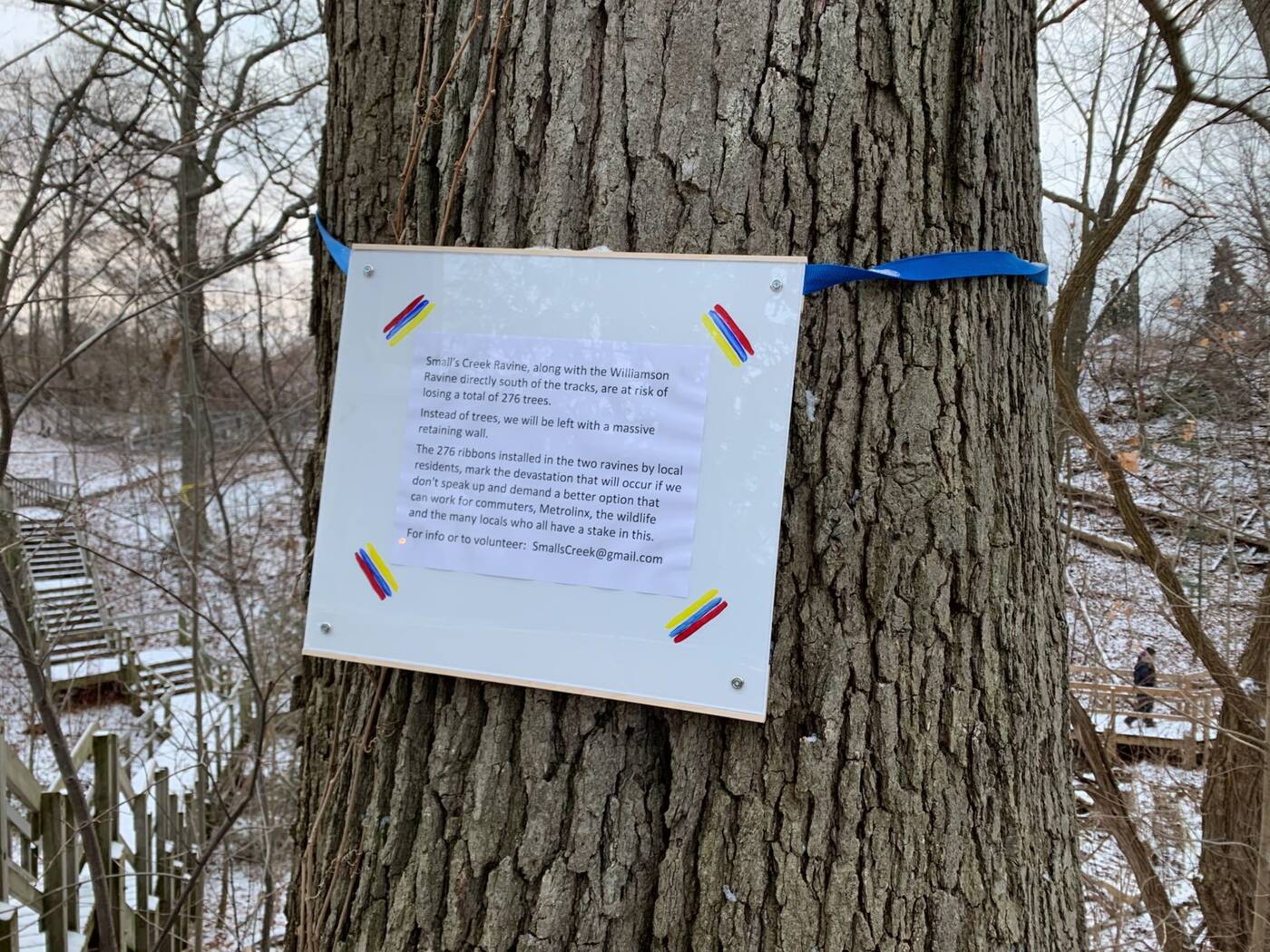 Local residents are responsible for the signs and ribbons in protest of the retaining wall that might be built in the area.

Over 250 trees will be cleared in order to build a retaining wall in the ravine. Community members put up the ribbons and signs to spread the word about the project in hopes to save the small natural area in their backyard. 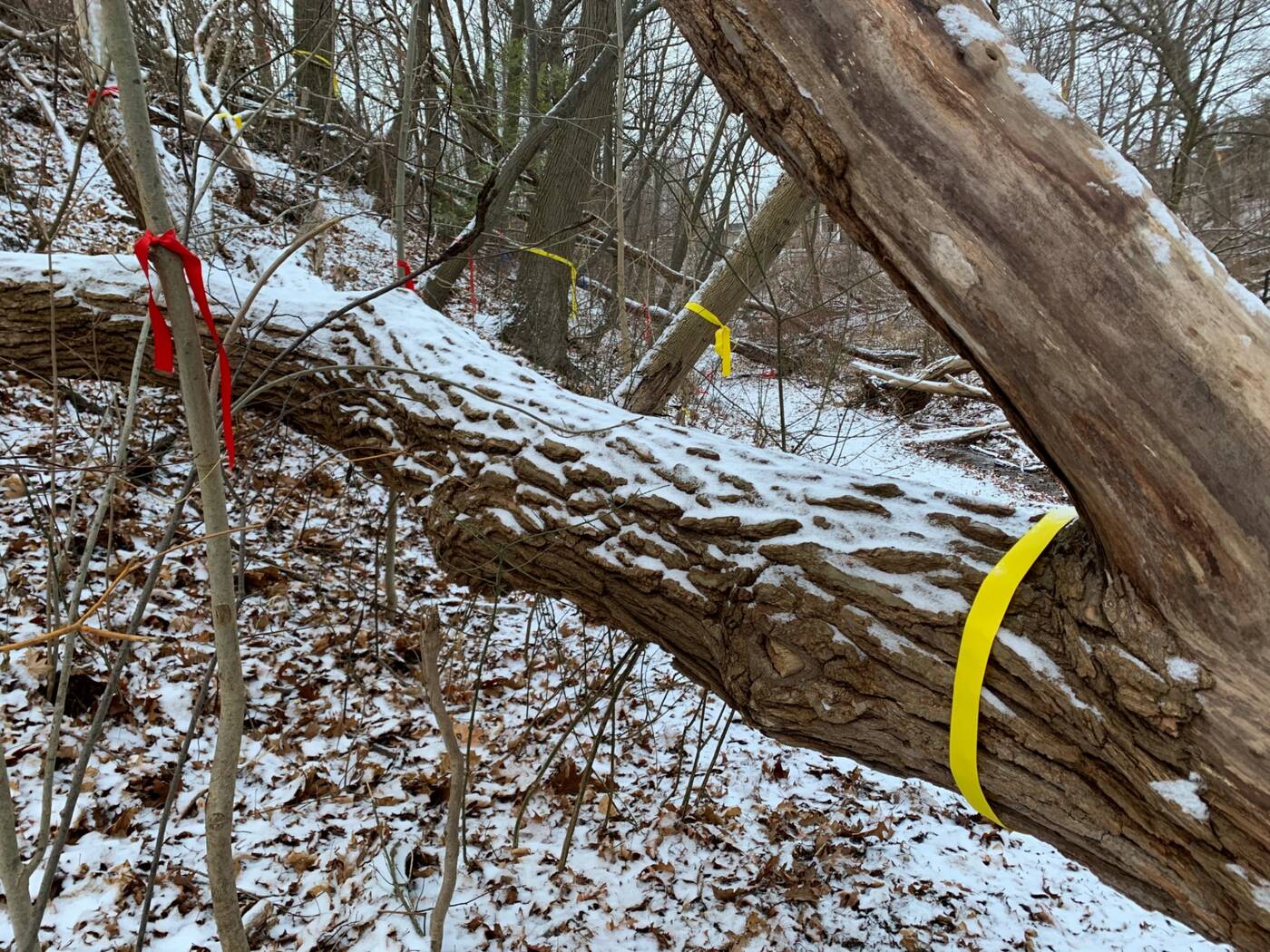 Colourful ribbons mark the trees that would be cut down due to the project.

One community member who was out for a morning walk with their dog expressed that instead of tearing down and building over the natural area, they, along with many others from the community, hope the beautiful ravines can be connected. 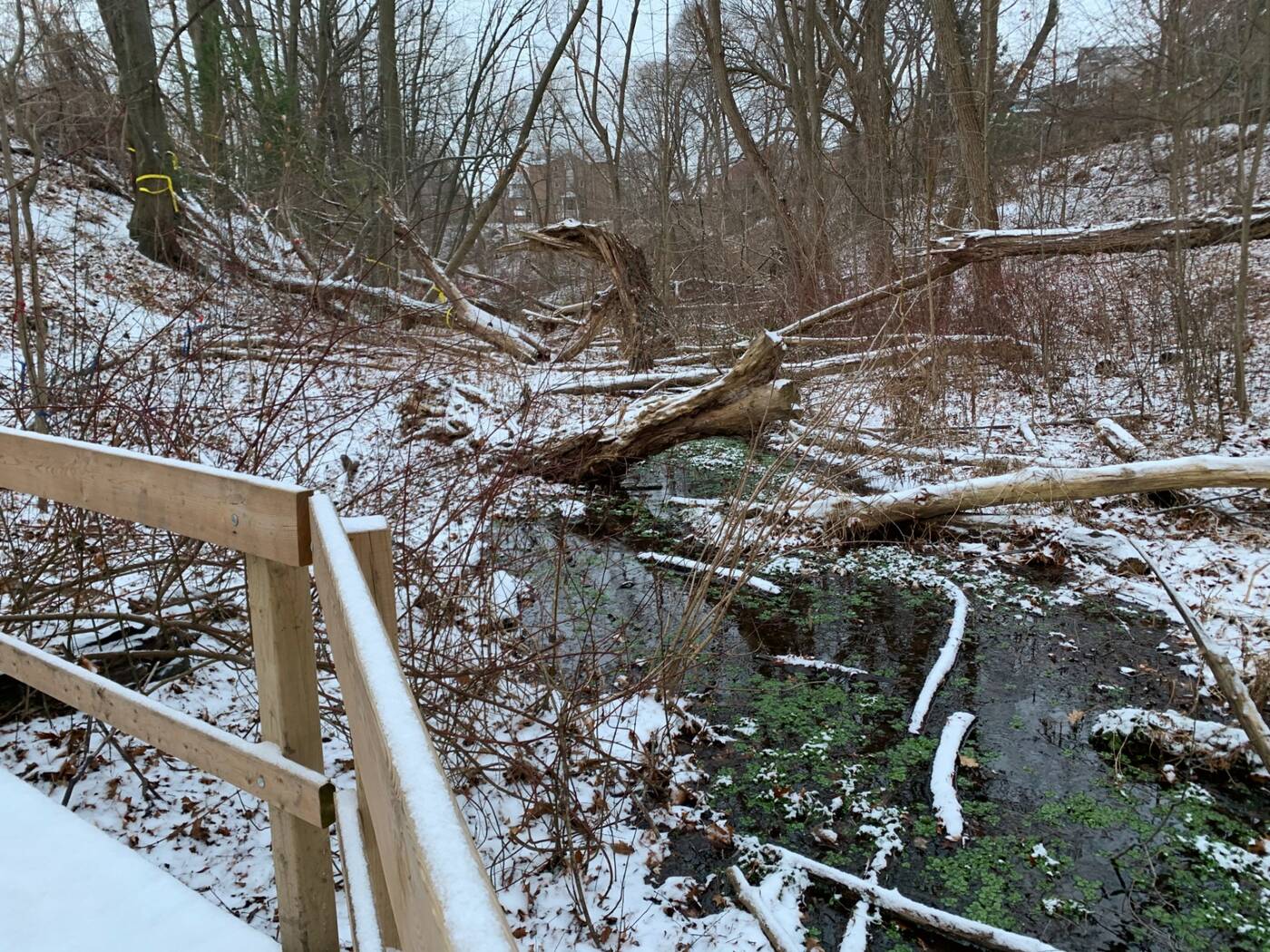