It's more than likely that you've crossed Toronto's Humber Bay Arch Bridge a number of times. But with lake views, multiple lookout points, and a large network of trails, you could easily spend an entire afternoon at the expansive Humber Bay parks. 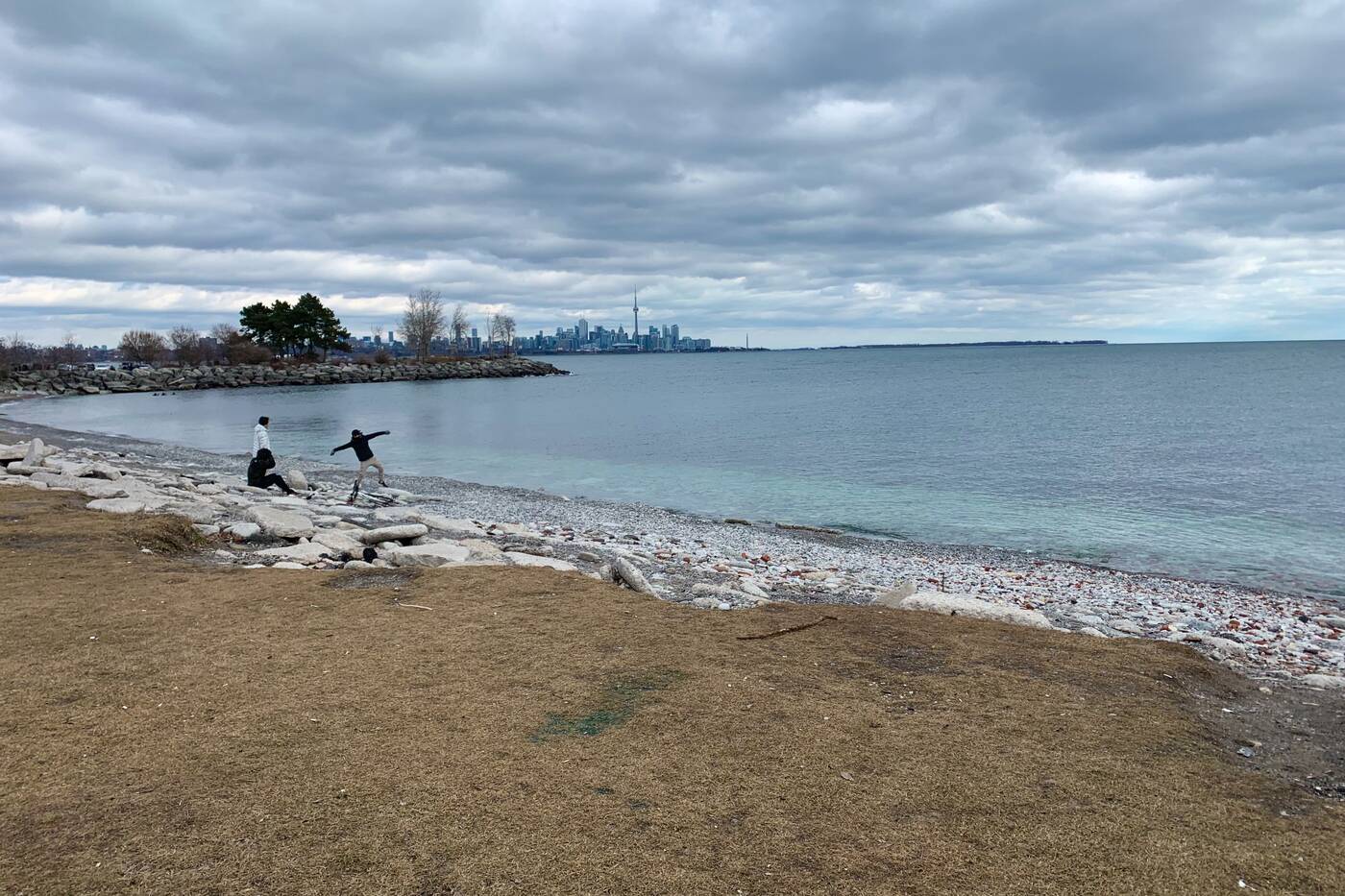 The parks along Humber Bay provide some of the best views of Toronto's skyline.

Split up by Mimico Creek, Humber Bay Park East and West are connected by a bridge with a ribbed arch that closely resembles the Humber River bridge. 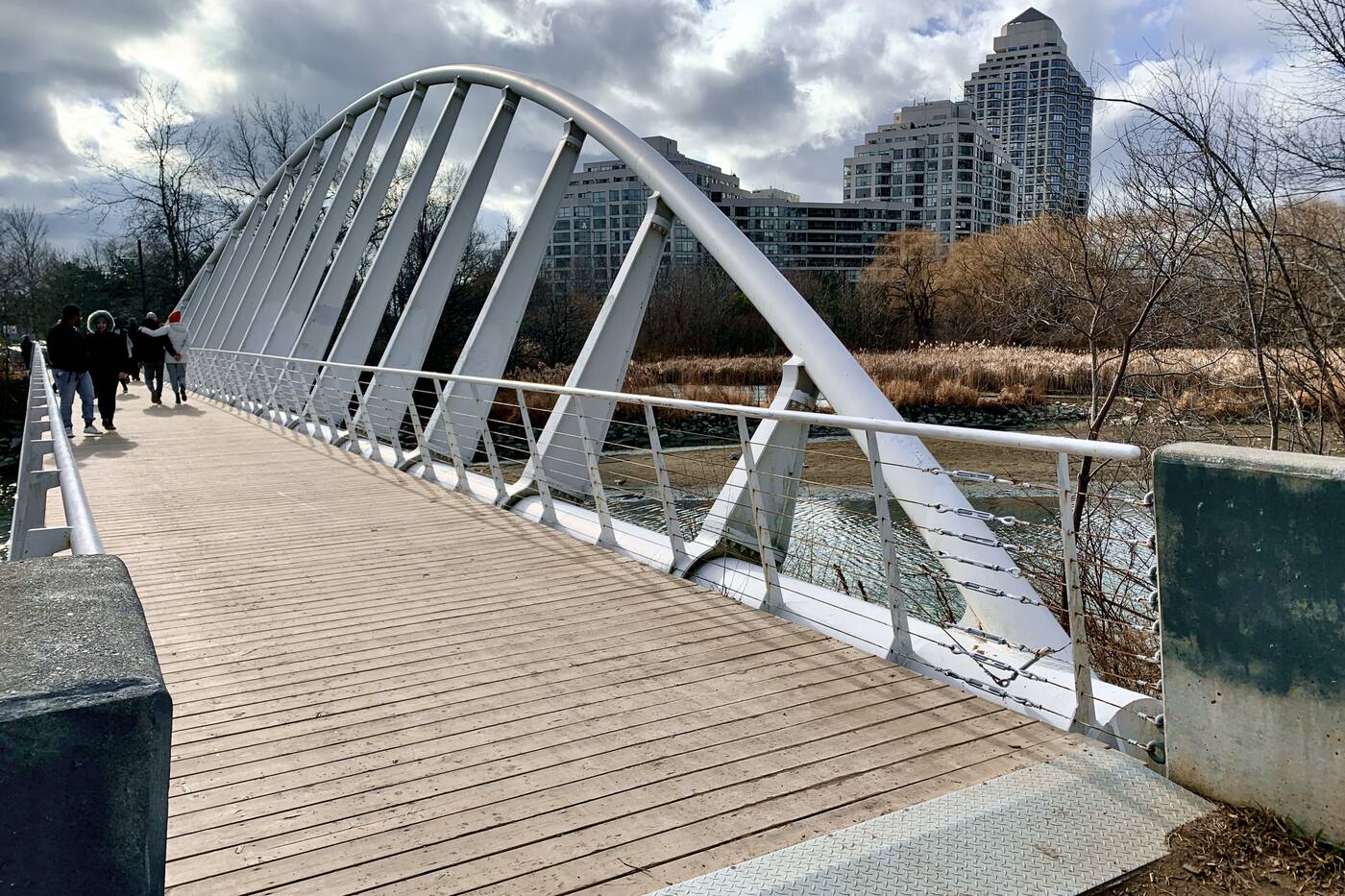 At Humber Bay Park East, you'll find a butterfly habitat. The area that provides a critical home for a variety of native butterfly species is a popular destination in the warmer months. 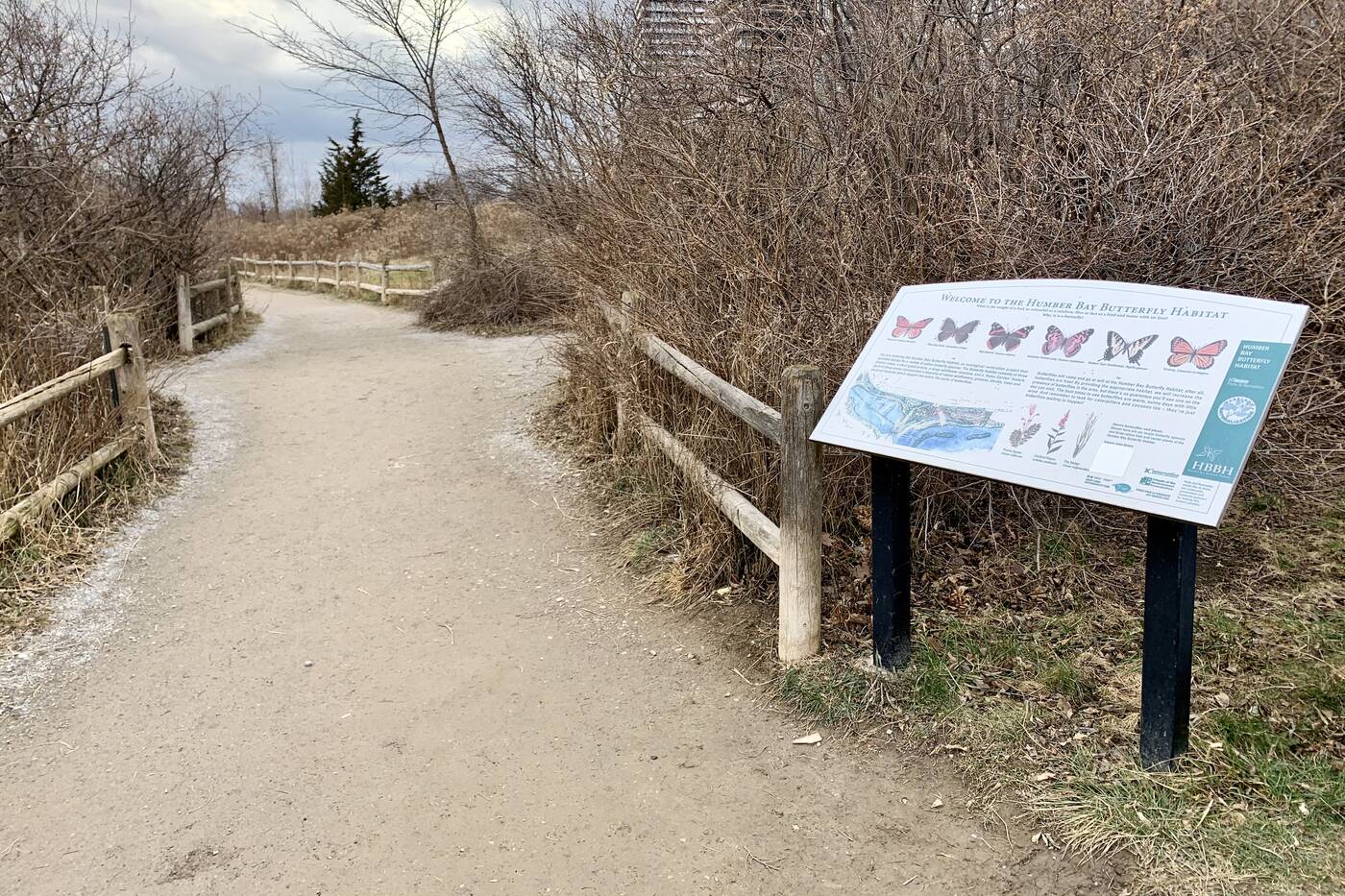 Past the butterfly habitat to the south, you'll find a memorial to the victims of the bombing of Air India Flight 182 along the trail. 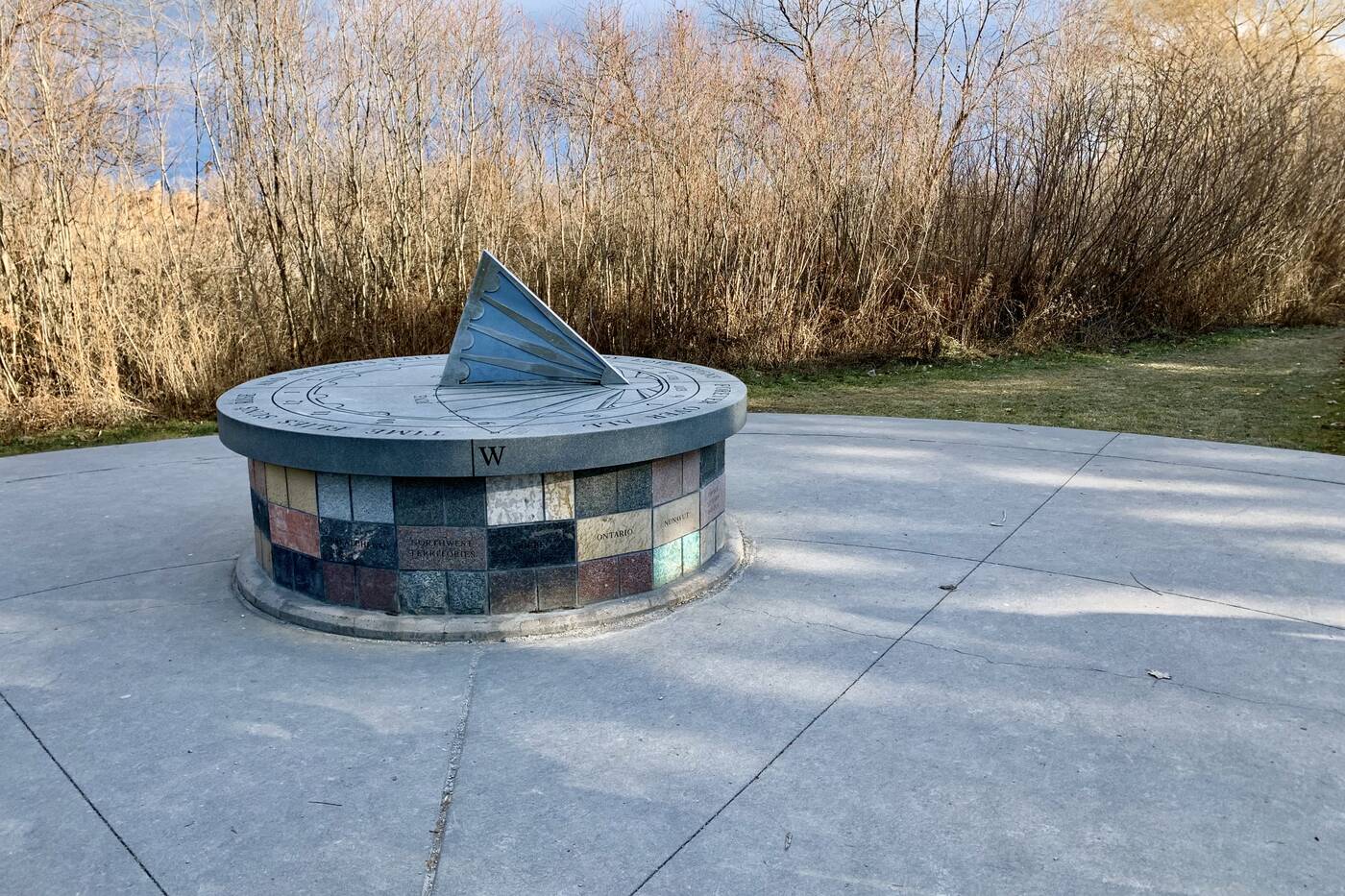 A memorial of Air India Flight 182 is in Humber Bay Park East near the entrance of the trail system when you're heading south toward the Lake.

There's also a series of wooden boardwalks here that lead you through the different ponds in the area. 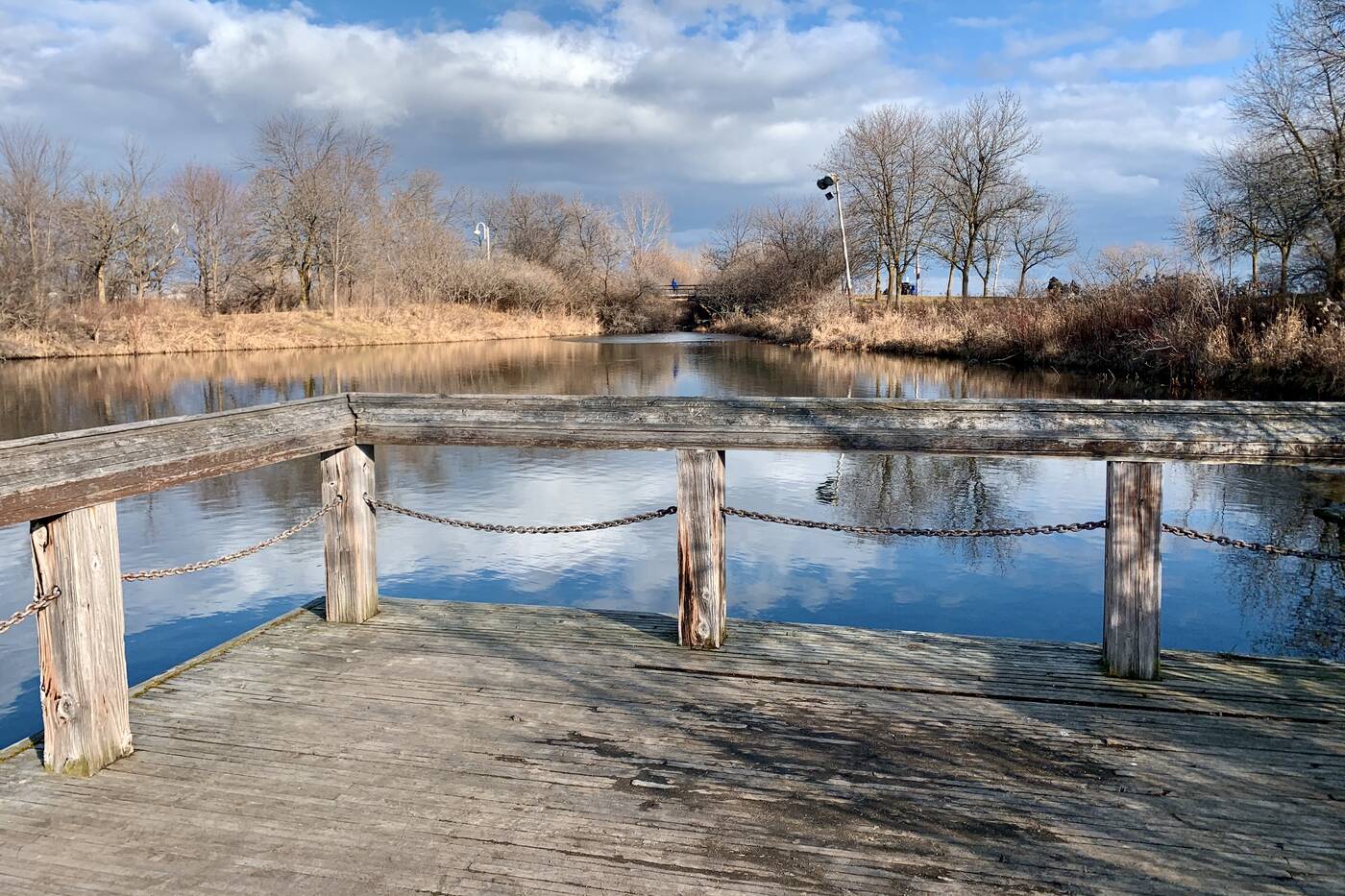 There's a series of ponds and wetlands through the trail system in Humber Bay Park East.

Whether you'll actually see wildlife is not a guarantee due to the number of people that frequent the trails. Though, if you look close enough, you'll certainly be able to spot signs that they're close by. 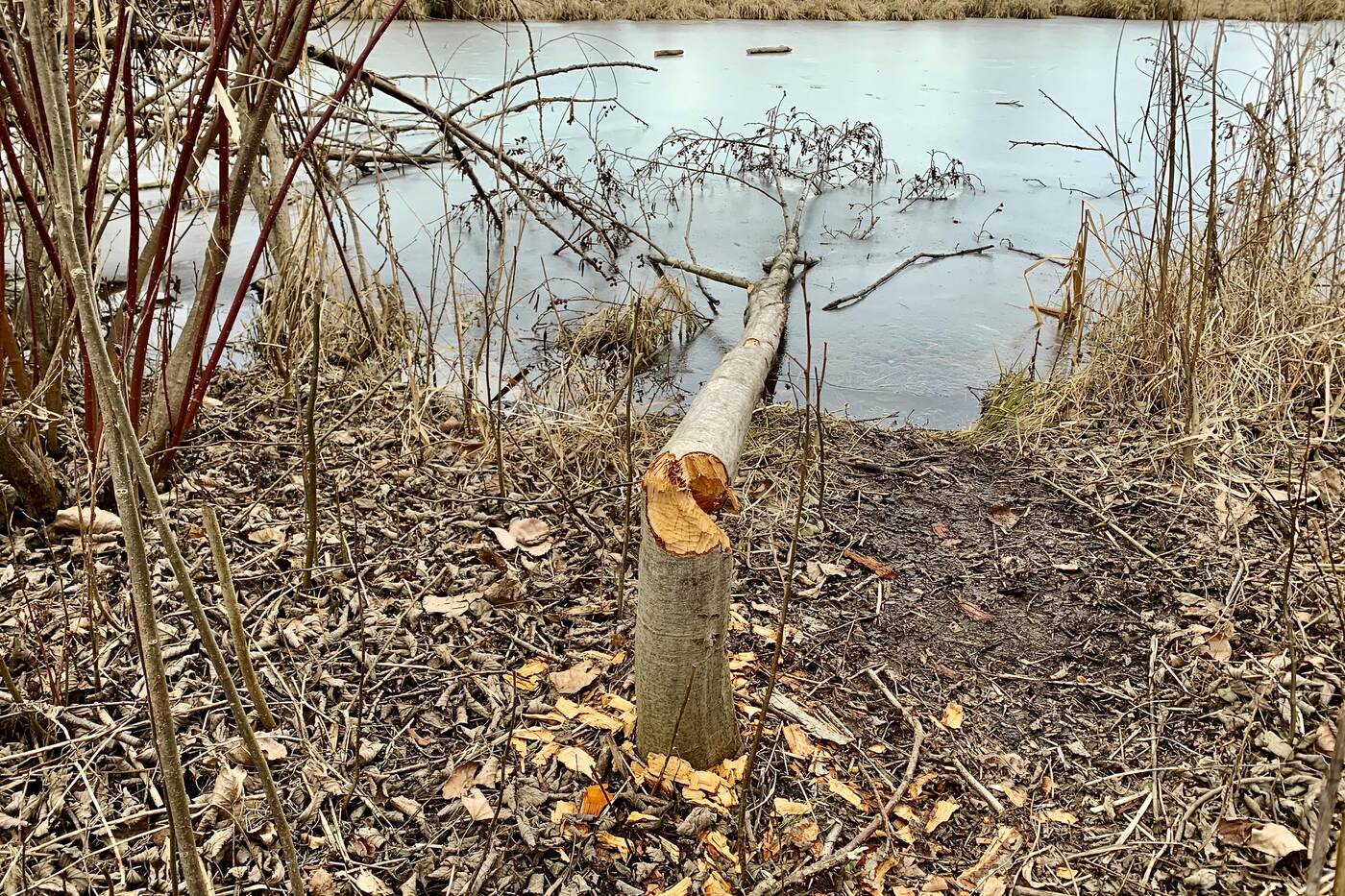 You'll be able to spot where beavers have been in the area by the chewed up trees.

There's a large network of trails through the 47 acres of Humber Bay Park East but to carry on to even more trails on the west side, you can cross back over the white bridge. 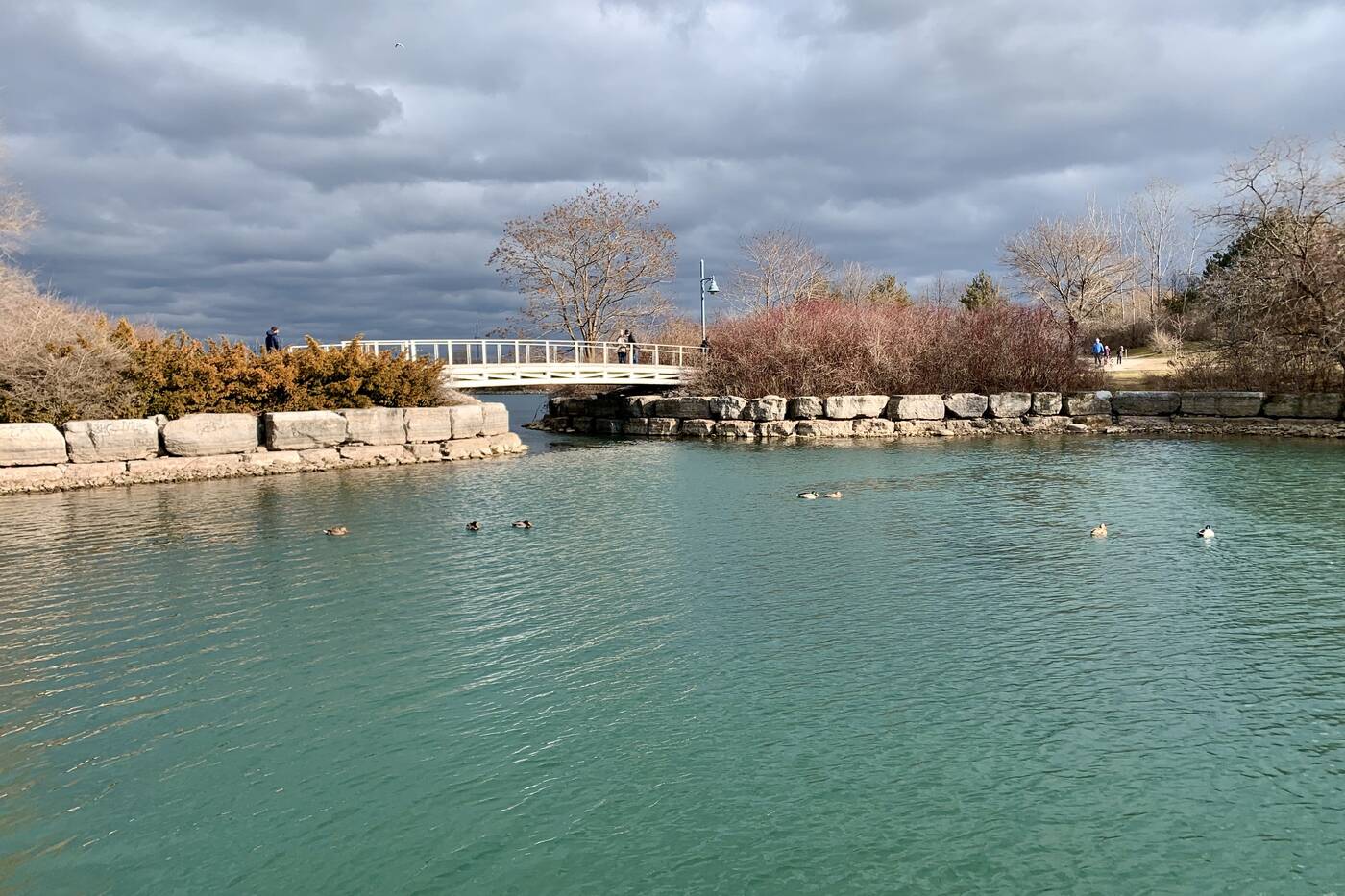 From this point, you can choose to walk along the paved pathway or take the slightly more picturesque route along the boardwalk that crosses over Lake Ontario. 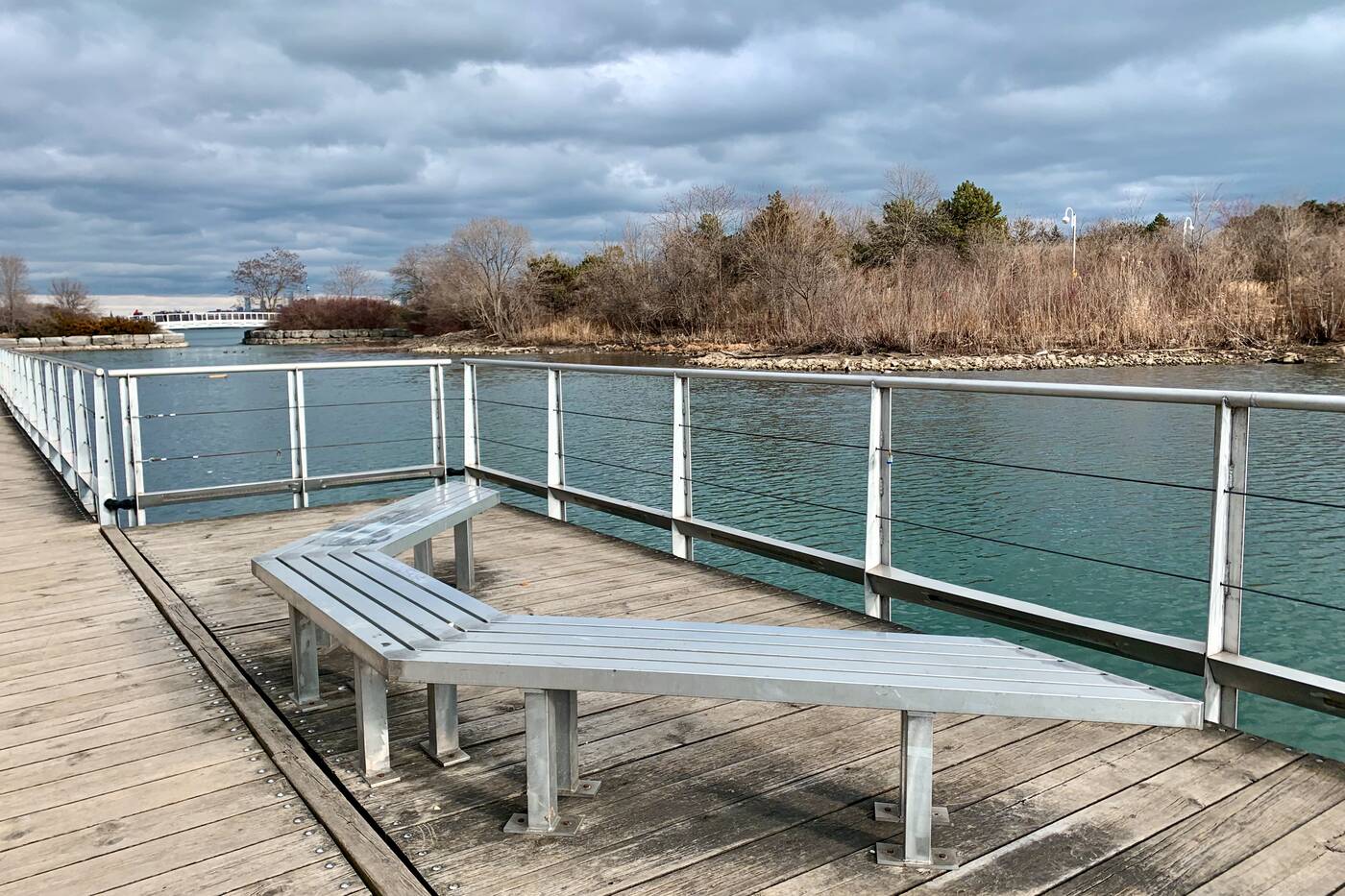 Benches can be found on the stretching boardwalk.

As you continue on, you're sure to spot a wide variety of ducks and geese overwintering in Lake Ontario. 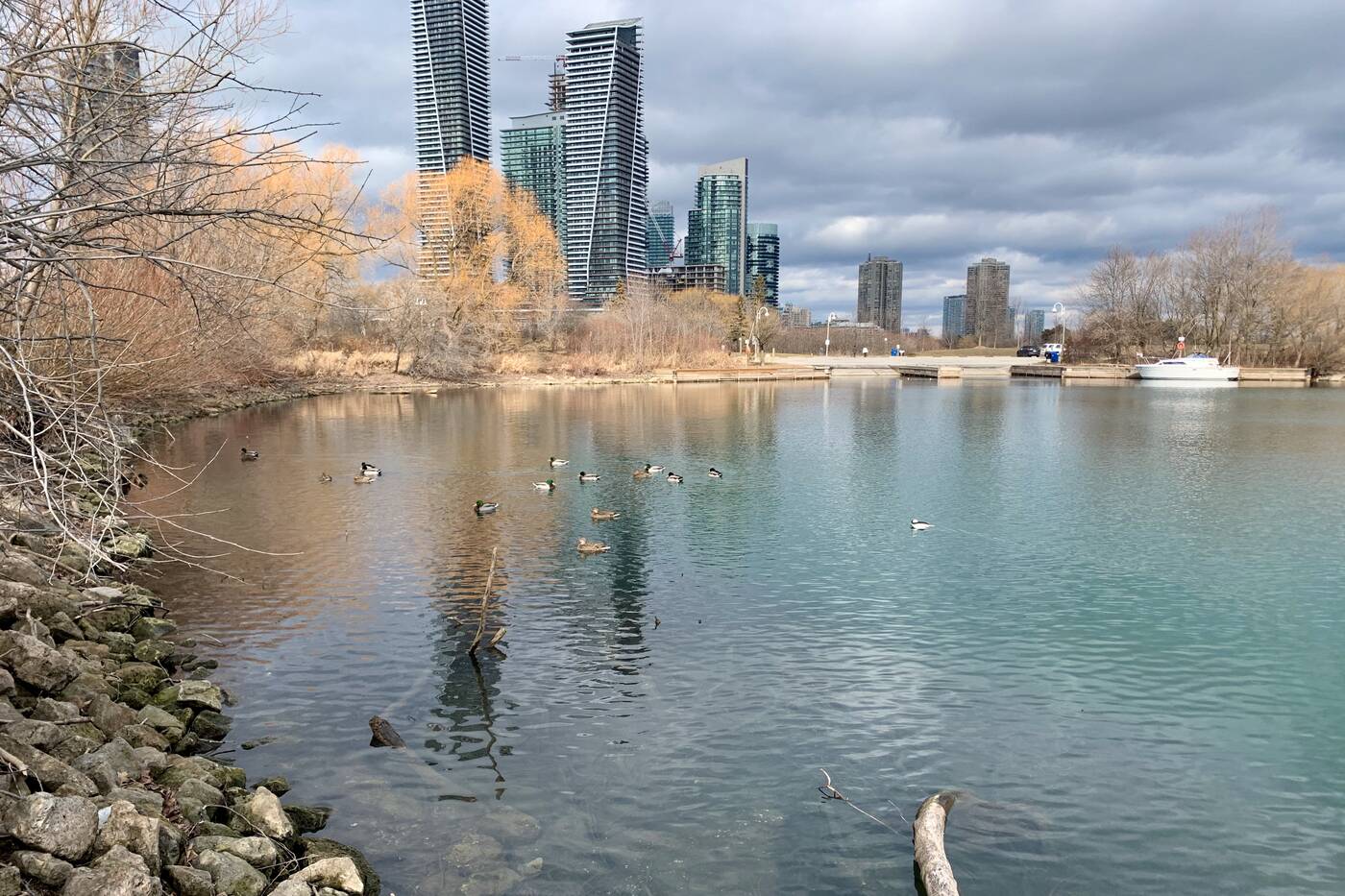 The area is a popular spot for migratory birds.

The 300 acres of Humber Bay Park West is home to a sailing school and yacht clubs, a number of parking lots making it very accessible and a large off-leash dog area at the westernmost point. 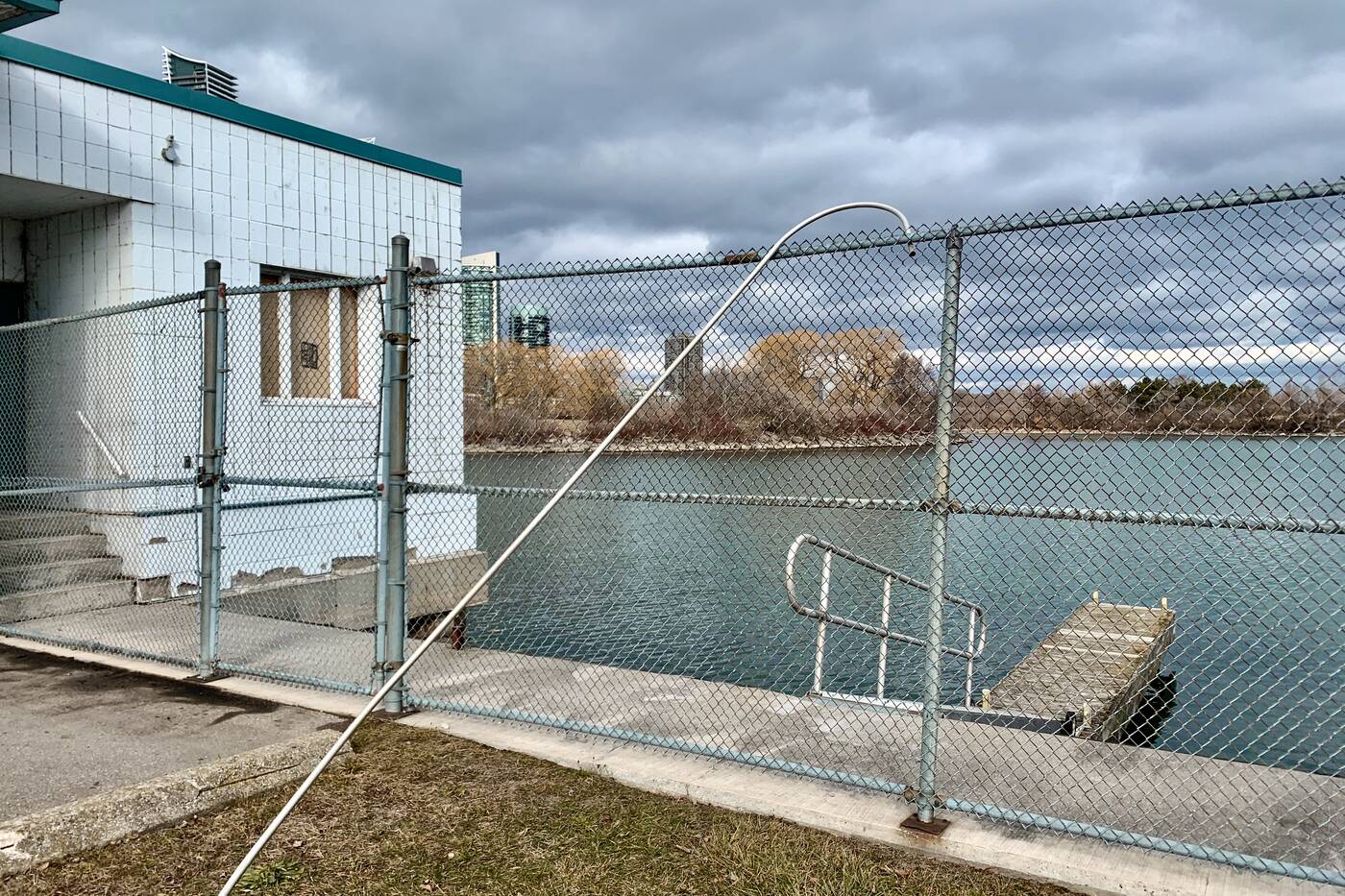 There are a few yacht clubs and a sailing school found at Humber Bay Park West.

A nice stretch of pebbled beach can also be found through the entire area with an interesting mix of rocks and bricks, which you could choose to walk along instead of the trails. 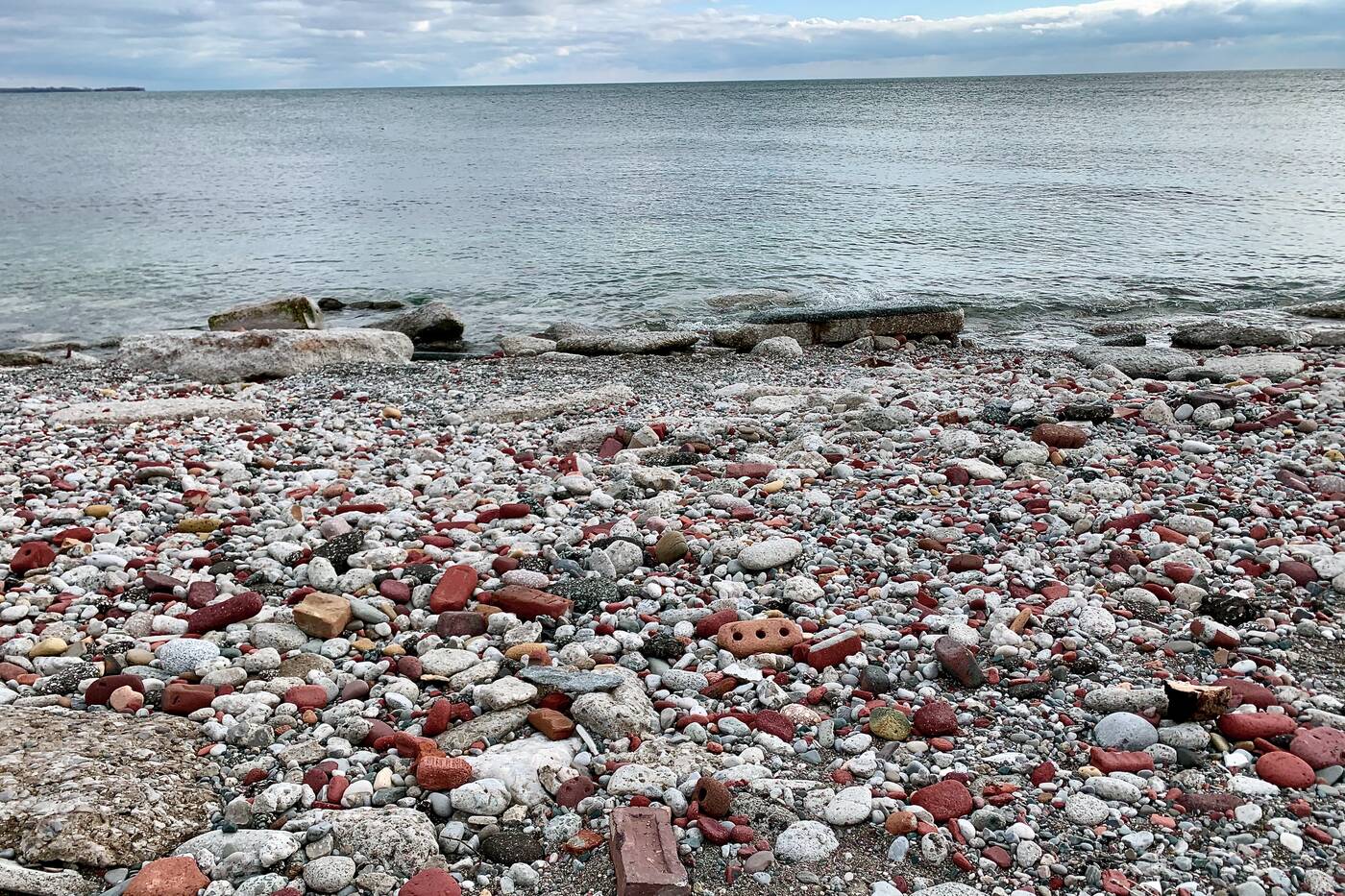 The beachfront is full of colourful rocks and bricks.

There are great views of the water and Toronto’s ever-expanding skyline no matter where you find yourself in the park. 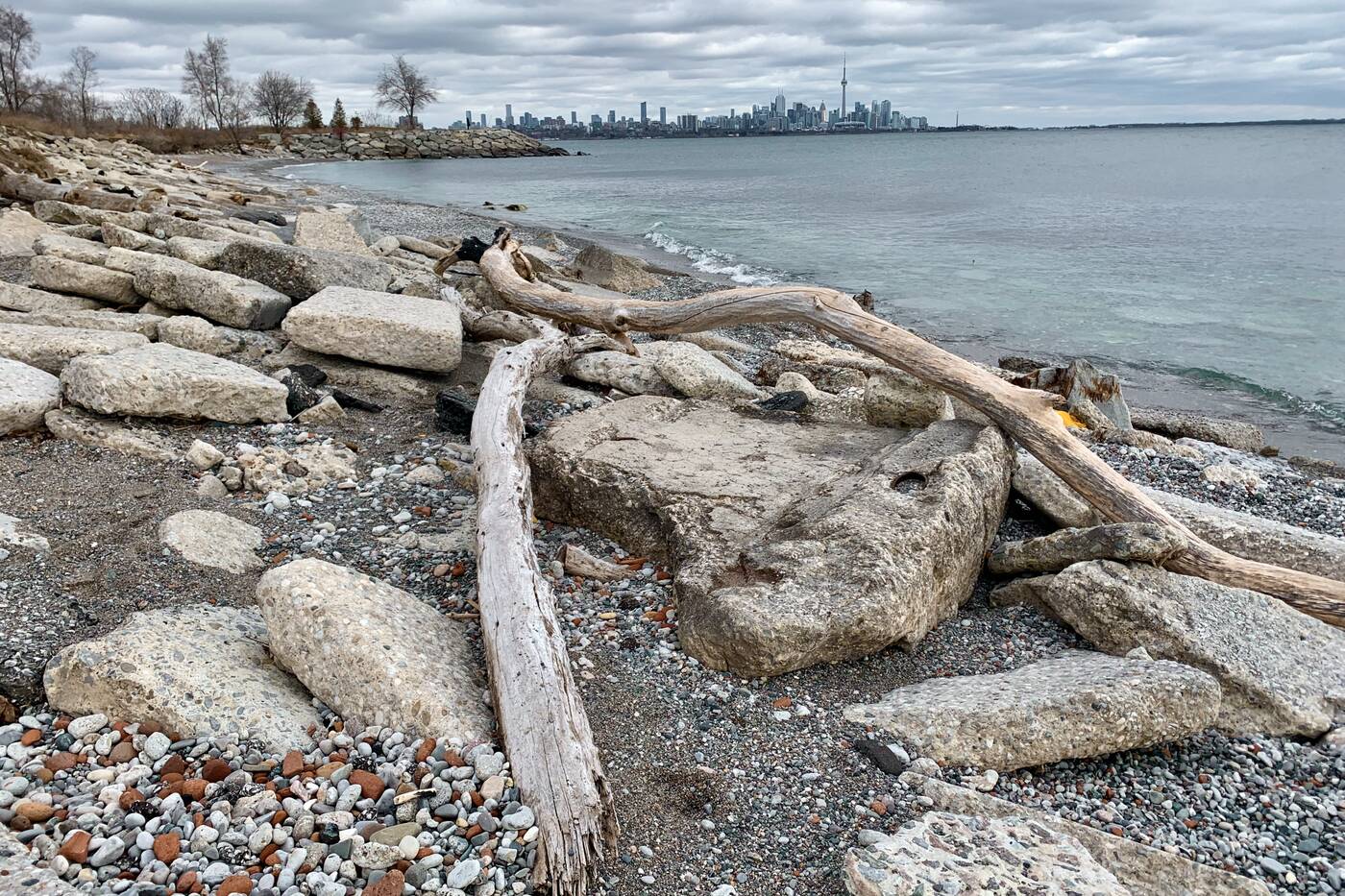 You can walk along the beachfront or the paved trails as you make your way through the park.

Once you reach the west end of Humber Bay Park West at a lookout known as Etobicoke Point, you'll find a lighthouse as well as a few picnic tables and benches where you can enjoy the view. 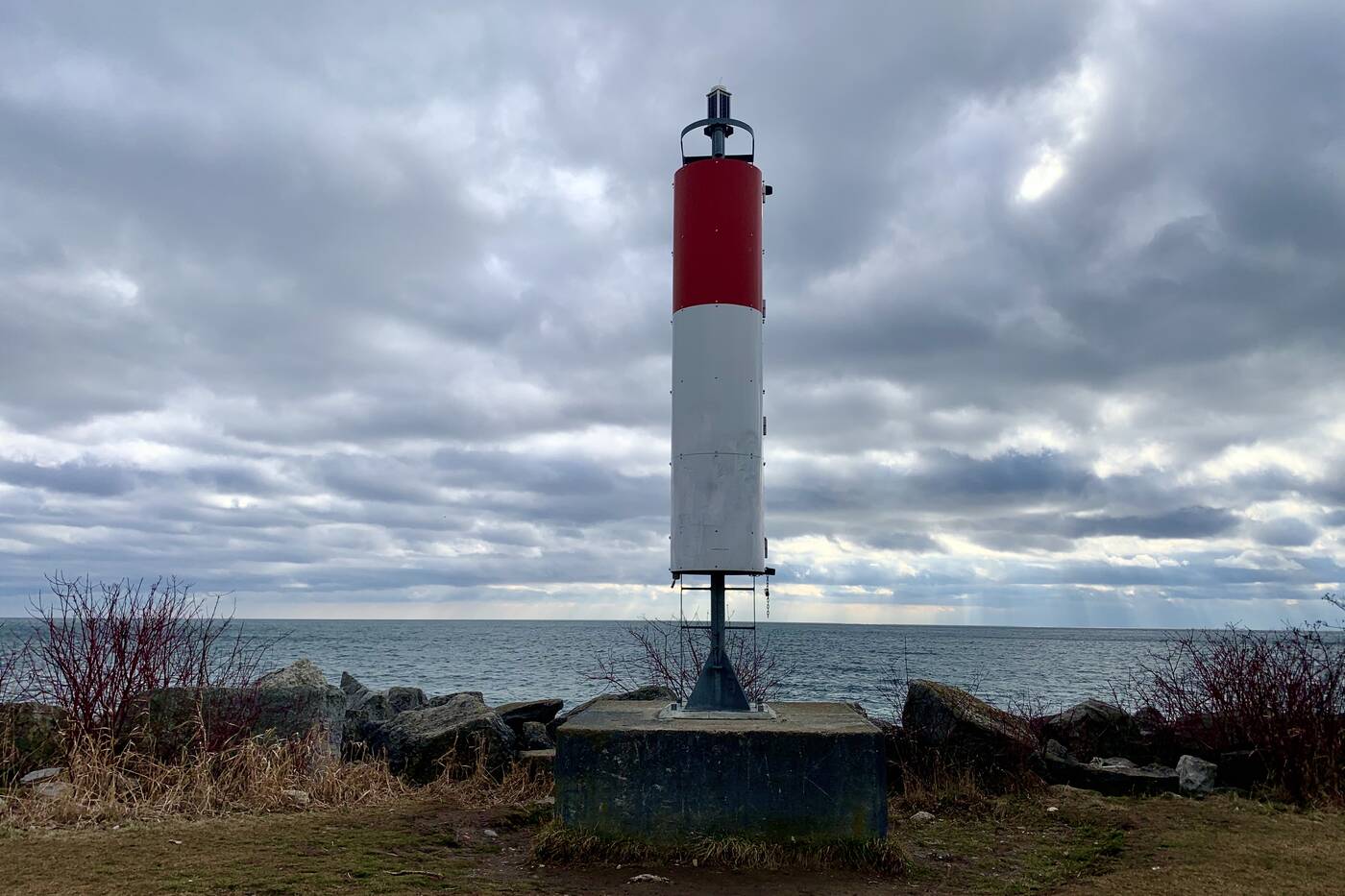