The Humber Bay Arch Bridge is one of Toronto's most iconic structures.

No matter which angle you approach it, this pristine arch at the mouth of the Humber River photographs beautifully, and is easily one of the most photogenic spots in the city. 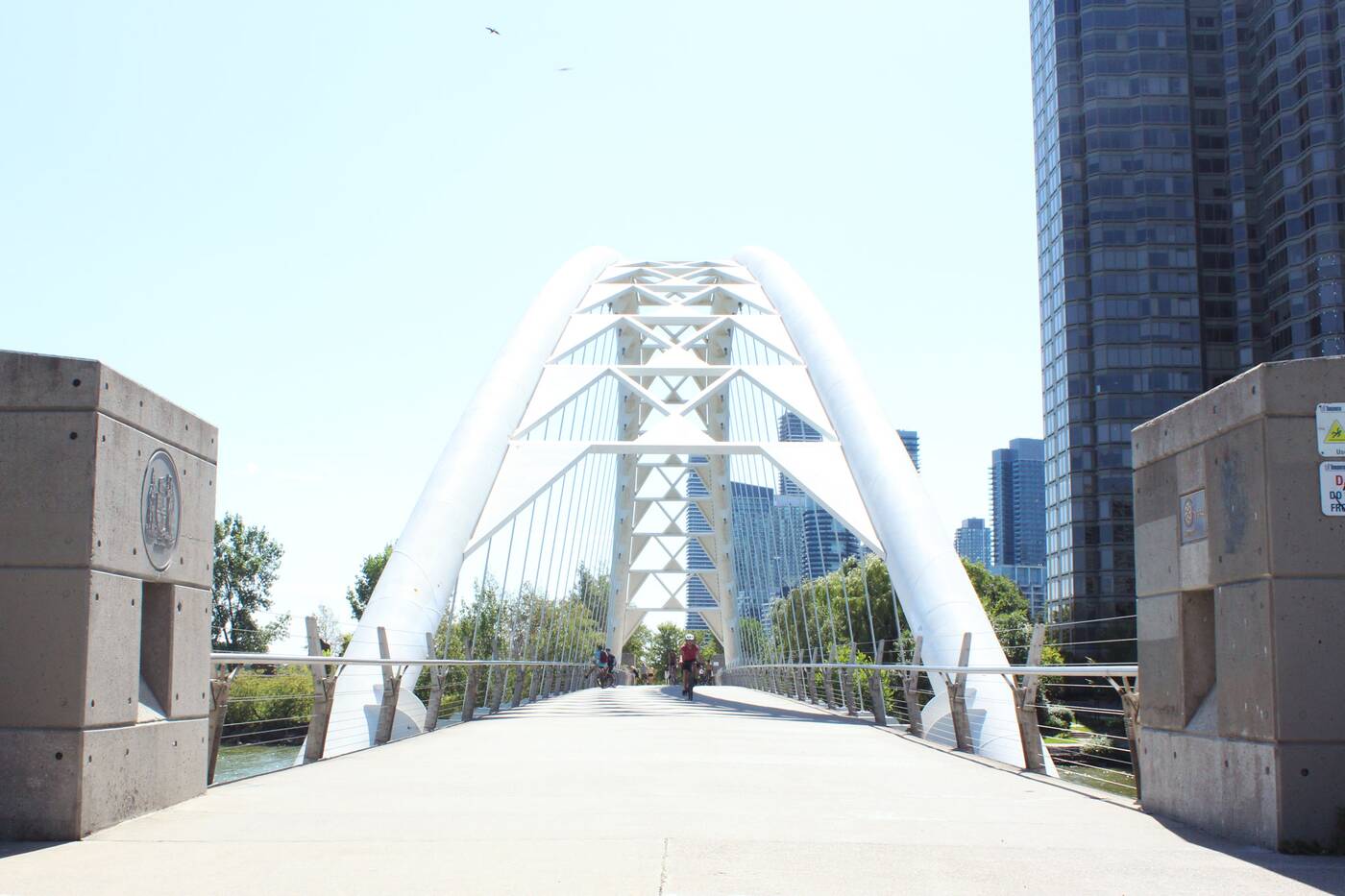 The Humber Bay Arch Bridge was built in 1994.

This 456-foot-long foot bridge is always bustling with pedestrian traffic, cyclists, and rollerbladers.

Built in 1994 as part of the Martin Goodman Trail, it allows the path to continue west along the 1,400-kilometre path that links close to 68 communities along Lake Ontario, Lake Erie, and the St. Lawrence River. 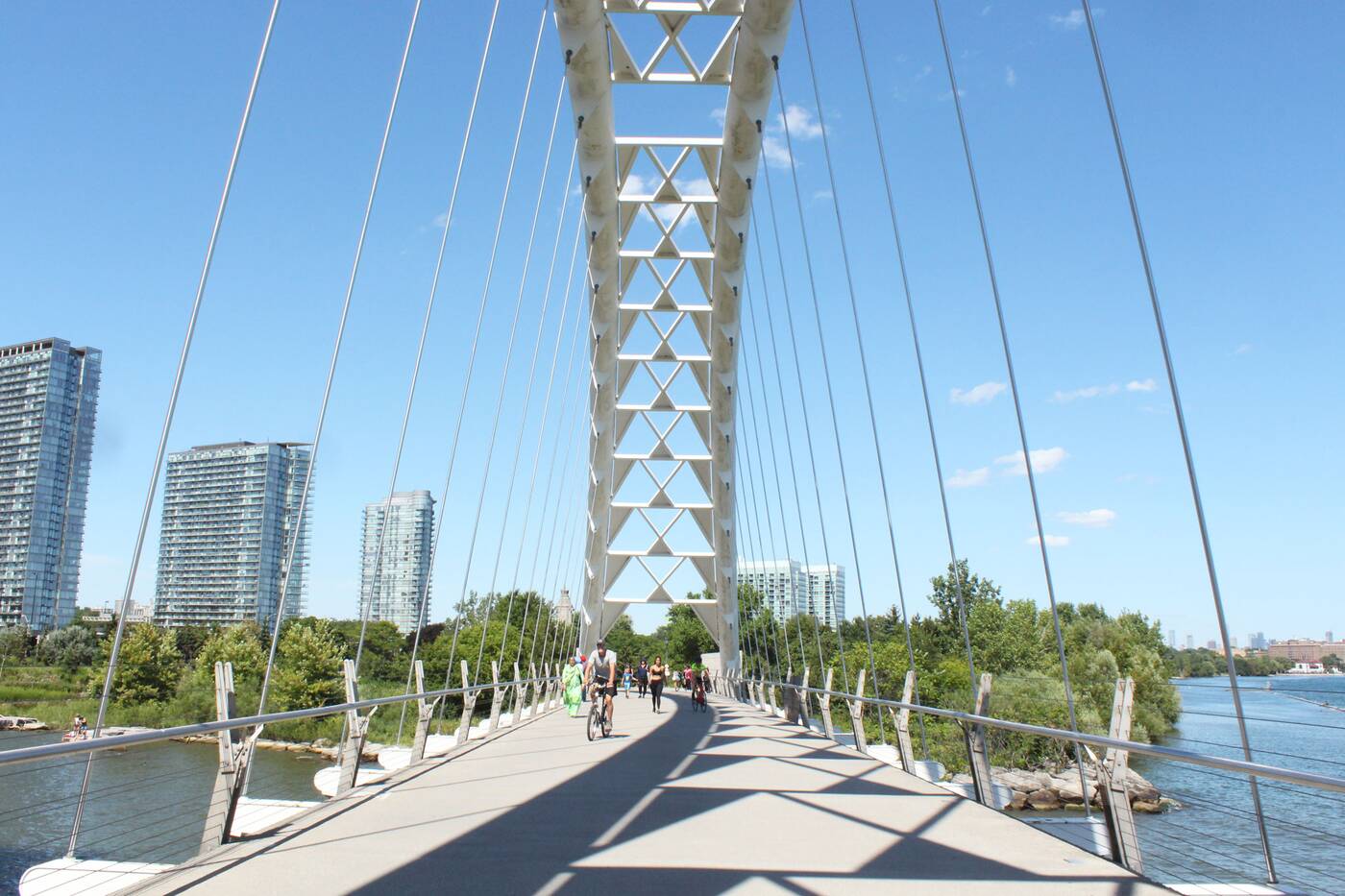 The bridge is an extension of the Martin Goodman Trail.

Walk beneath its double-ribbed steel pipe arches and you'll notice the shadows of the 44 stainless steel hangers which suspend the deck, are as much an attraction as the hangers themselves. 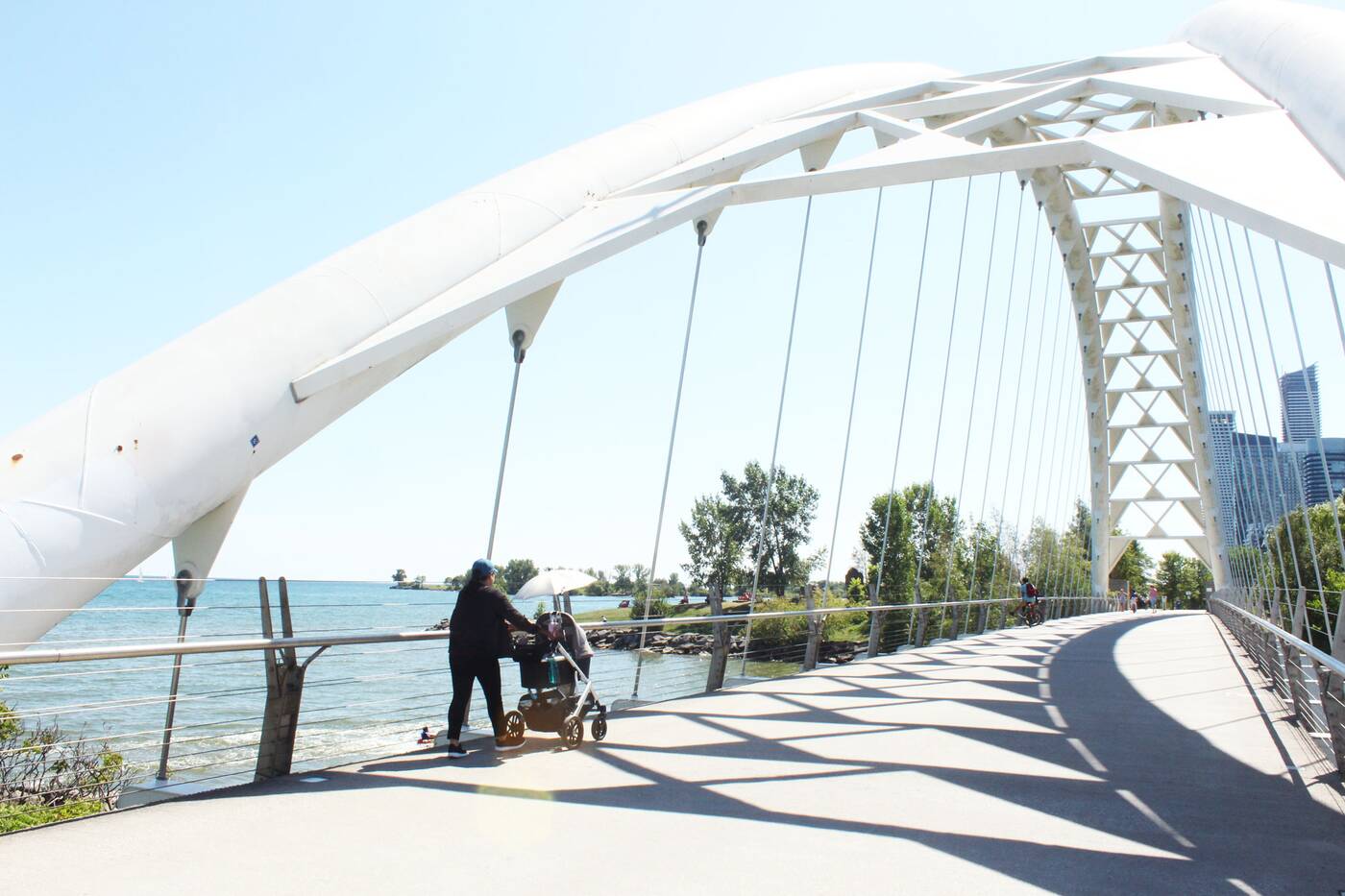 Spanning 456 feet-long, the bridge can get you from Sunnyside Beach to Mimico quickly.

The fascinating curves of this building often get it confused for a design by Santiago Calatrava, the Spanish architect who engineered the Bac de Roda in Barcelona and the Lusitania Bridge in Merida. 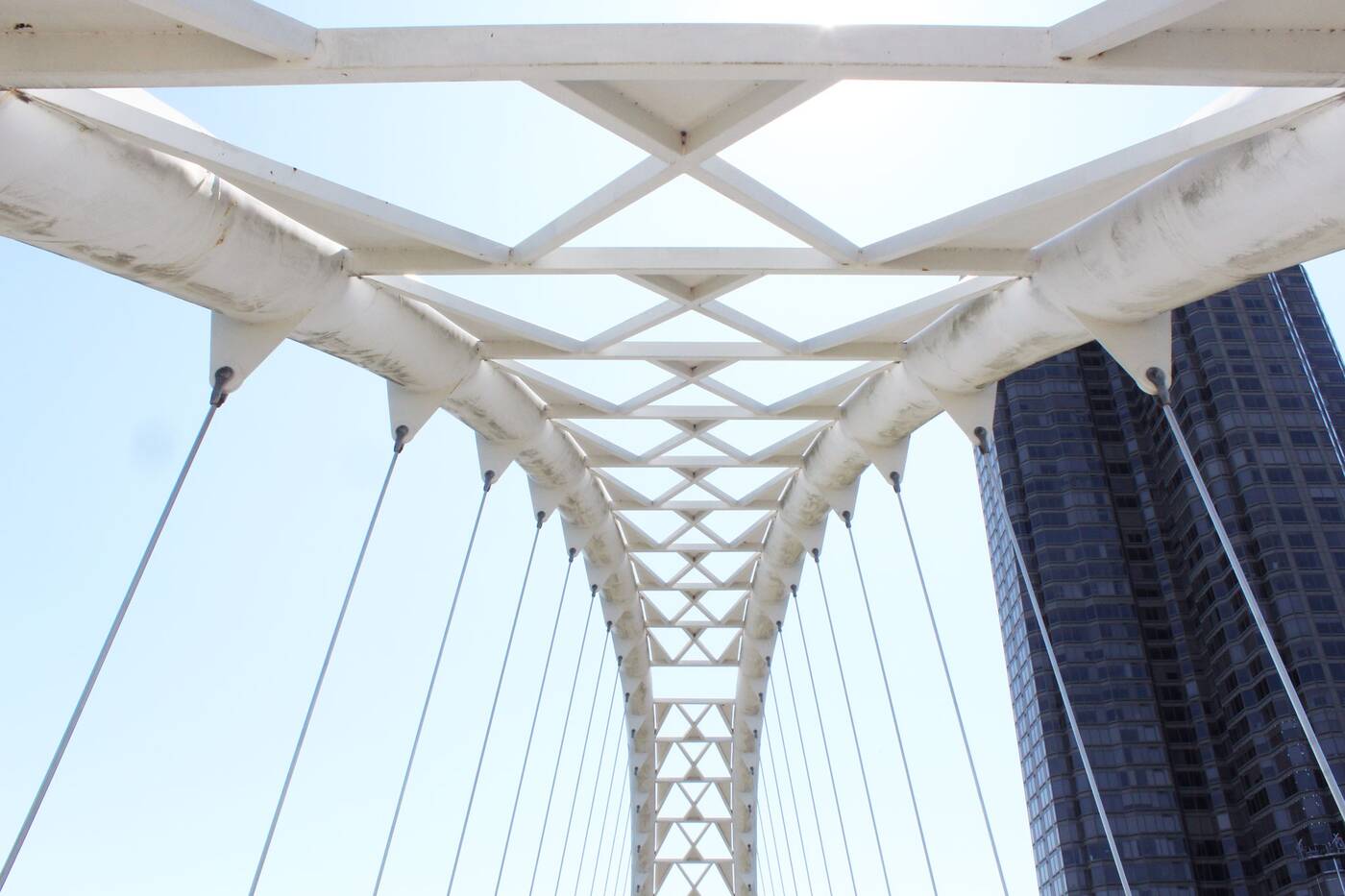 The design of the double-ribbed arches is influenced by the First Nations Thunderbird.

Actually, the Humber Bay Arch bridge was co-designed by the Toronto architecture firm Montgomery & Sisam, a group responsible for a slew of post-secondary buildings, and civic landmarks like the Toronto Botanical Gardens and Tommy Thompson Park. 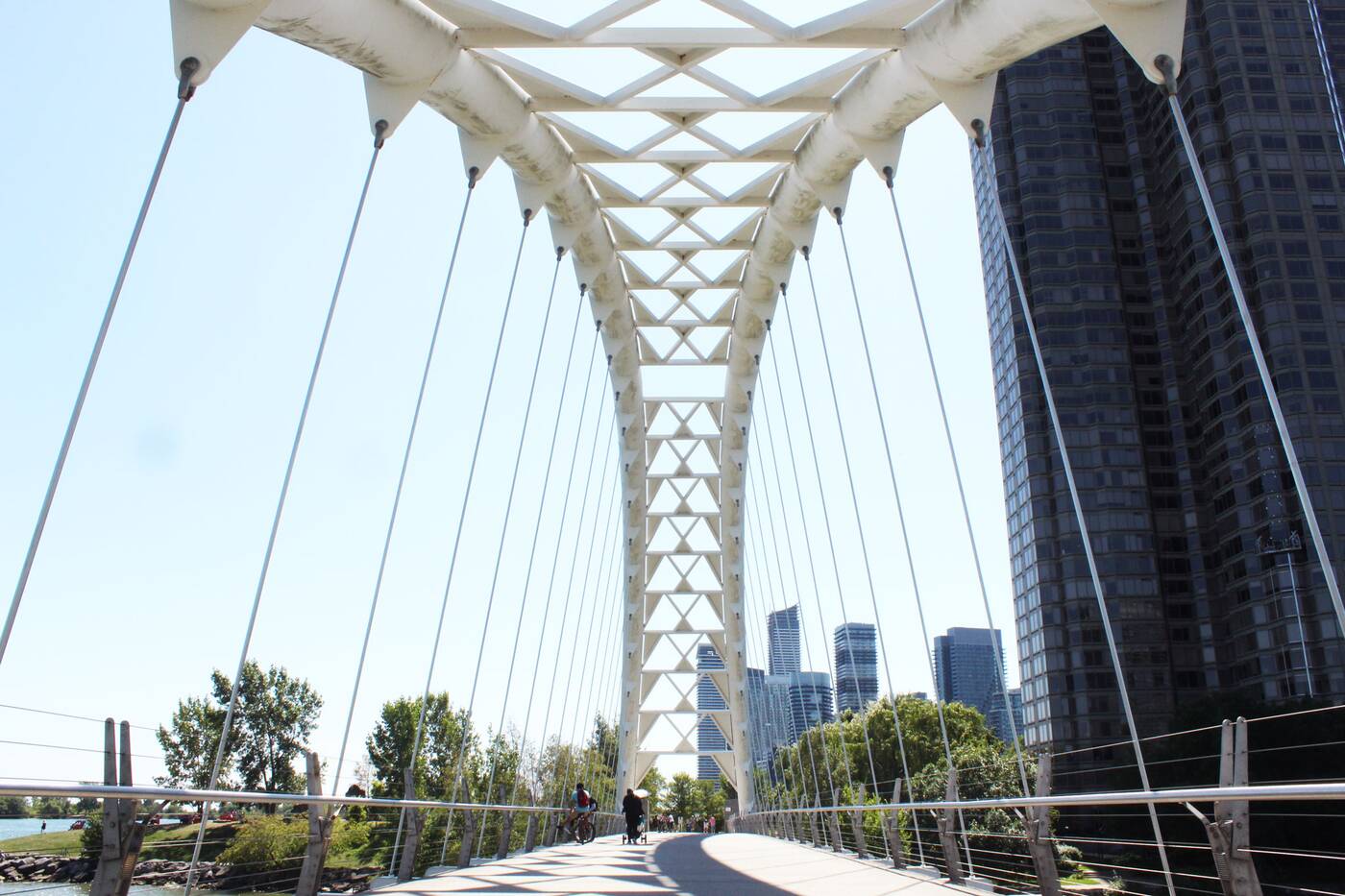 There are 44 stainless steel hangers suspending the deck.

The bridge's award-winning design is actually an homage to the to the Toronto Carrying-Place Trail, a trading route that was used by aboriginals, then in later years colonial fur traders, to get to Lake Simcoe and Georgian Bay for more than 200 years.

The First Nation influence is reflected in the geometric patterns in the ribbed arches, alluding to the Thunderbird, one of the most common spirits in First Nations culture. 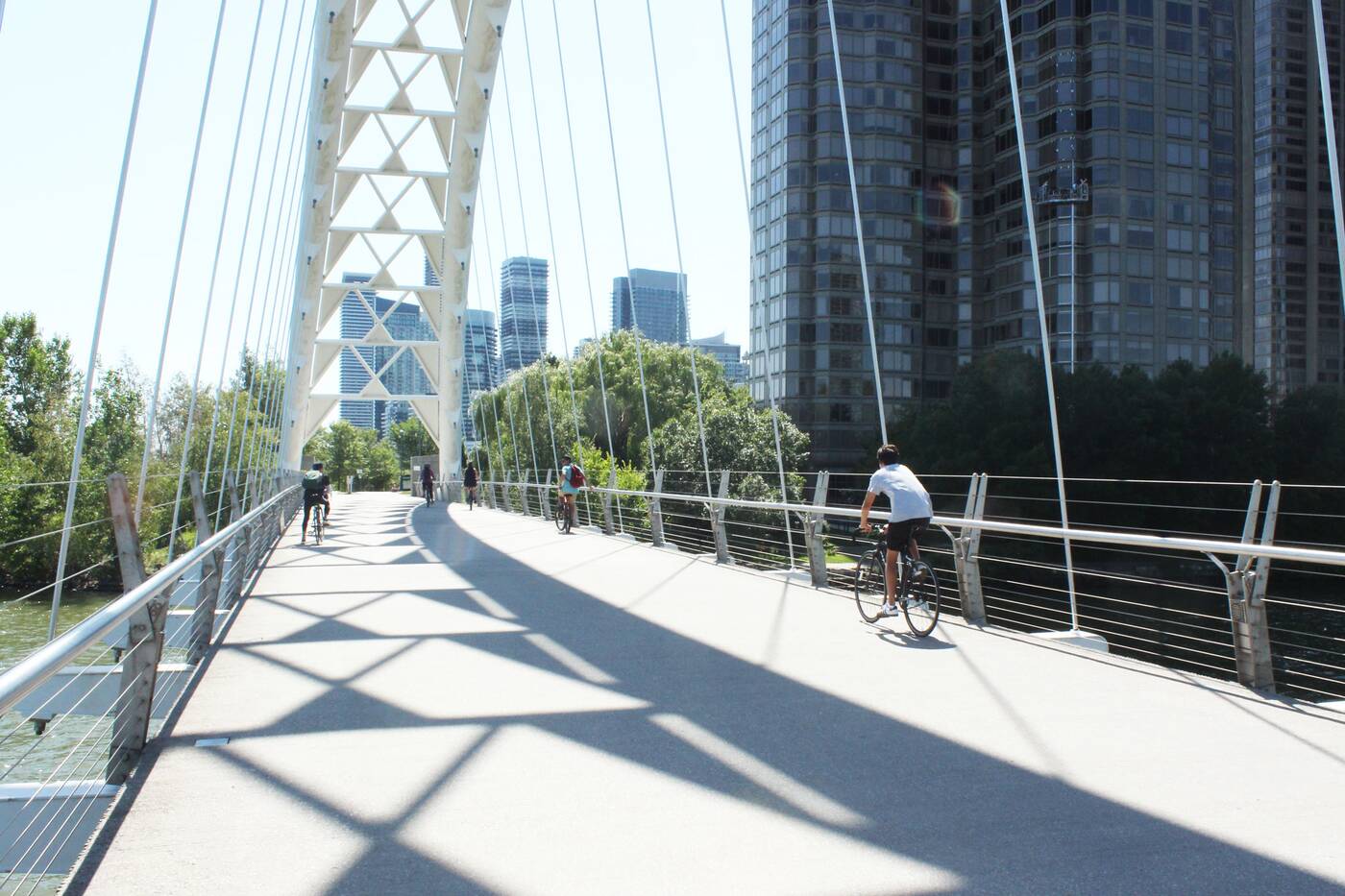 The arches creeates picturesque shadows on the deck.

It's these triangular shapes which create shadows on the ground as the sun passes from east to west, until the sun eventually sets, in which case you'll be granted one of the most beautiful vistas from this western landmark. 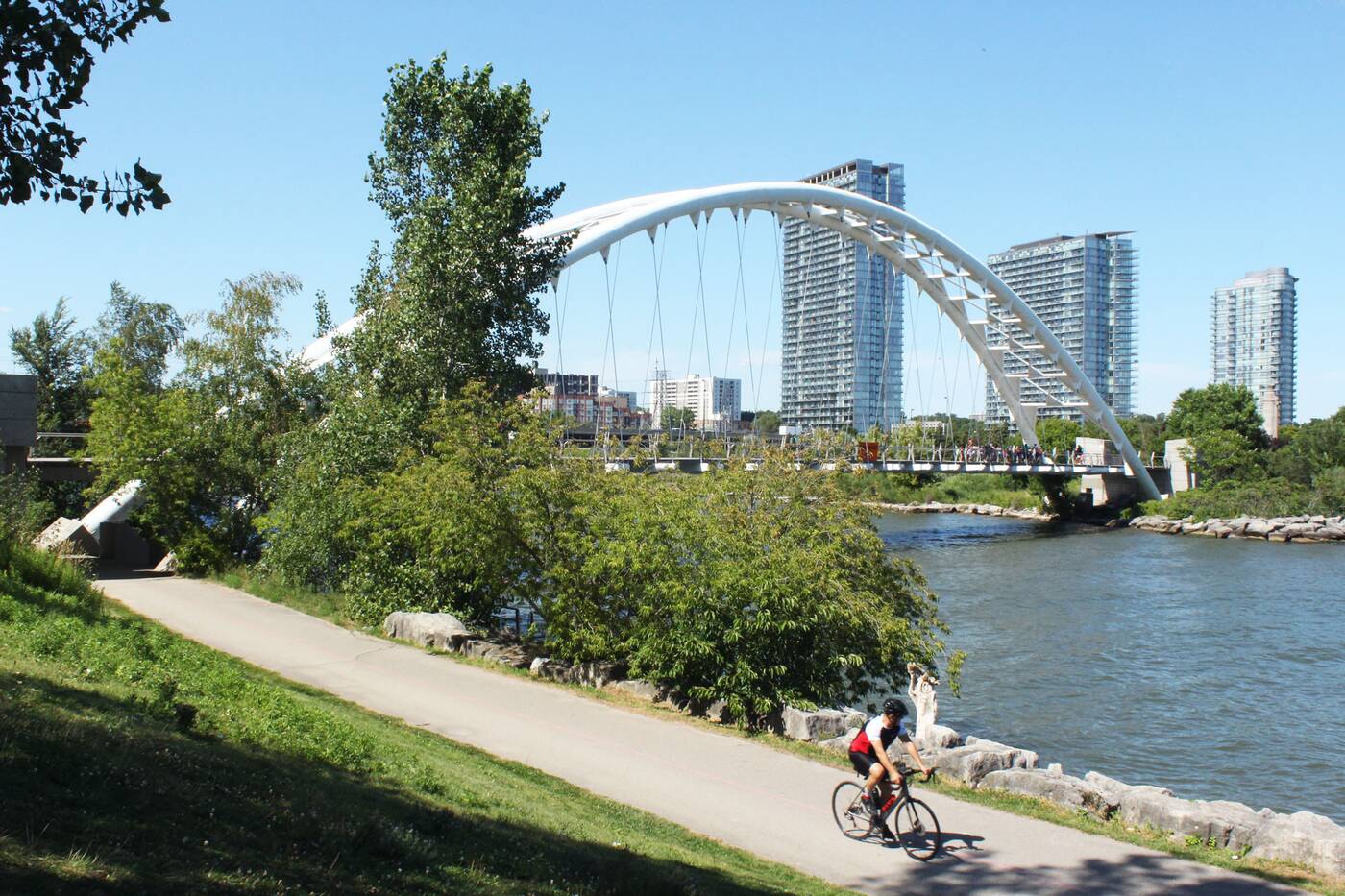