The coolest streets in Toronto each have their own unique thing going on. From industrial areas-turned-beer hubs to cultural throughways on the rise, these city streets bring something interesting to Toronto's growing landscape.

Here are some of the coolest streets in Toronto right now.

Straddling East Chinatown and Little India is this stretch of Leslieville, where big change is afoot.Recent years have seen this residential area transform into a hub of entertainment, from the newly-coined Gerrones intersection (think Pinkerton's or the new Hotel Delilah) to all the wonders that Gerrard Square Mall has to offer.

A street filled with acrobats and arts studios is now also home to a handful of attractive destinations: MOCA's taken over the old Tower Automative Building, Henderson Brewing sits conveniently off the rail path, the Drake Commissary is bustling with cool events, and the Nestle Factory makes the whole street smell like chocolate.

Just look to Dundas West Fest as an indication of the interesting businesses and project happening between Lansdowne and Ossington. Stylish design stores like the staple Tavares or Rose City Goods meet cultural bastions like Lula Lounge and Bairrada Churrasquiera. Throw in bars like Black Dice and Mahjong Bar, and you could spend all day here.

Famiglia Baldassare is one of the main destinations on Geary Ave. Photo by Hector Vasquez. 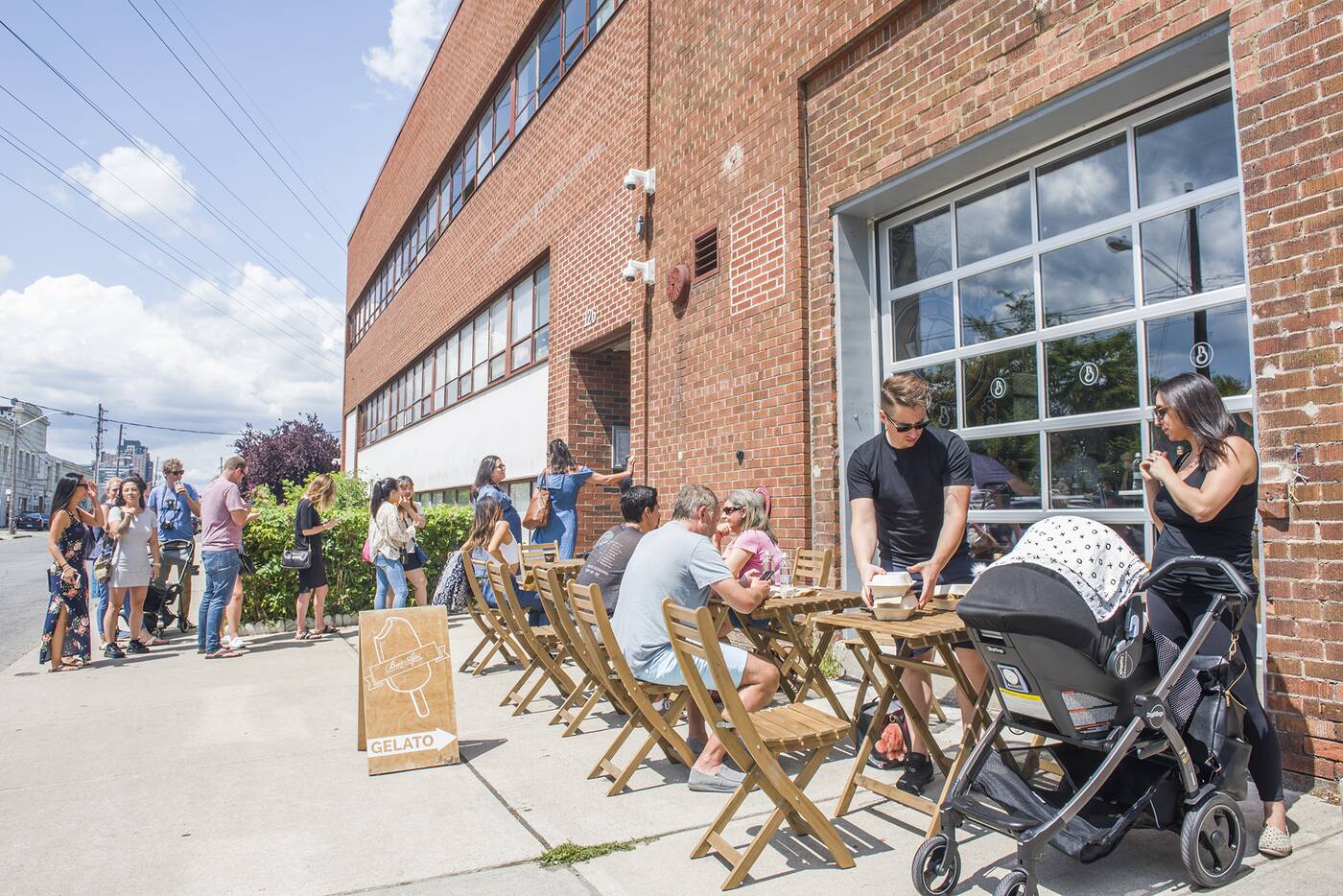 It's no secret that this industrial street running north of Dupont is the hiding place for a slew of phenomenal businesses. During the day, you'll have to dodge the delivery trucks to get to places like Blood Brothers, Famiglia Baldassare or Parallel. That's only a few notable business: you can also get an amazing tattoo here, rent a venue, or buy some fish.

History buffs love this street for its fascinating industrial past. It's the first-ever Heritage Plaque District and home to the old Wrigley Gum factory. In terms of the present day, Crow's Theatre, Surf The Greats, Dundas and Carlaw, the Rock Oasis and all the interesting businesses operating inside the Carlaw Industrial Centre are the standouts.

North of Brooklyn may have just moved here, but this Portuguese enclave has long been a destination for those who prefer this street to the fading vibes of Little Portugal. Chicken is the name of the game here, from St. Matthews BBQ for Portugese to King's BBQ for Peruvian Chinese. Maybe get a fresh line-up at Fade Room between meals.

Junction Craft Brewing has helped to transform Symes from a traditional meatpacking area to more of a beer hub. Photo by Hector Vasquez. 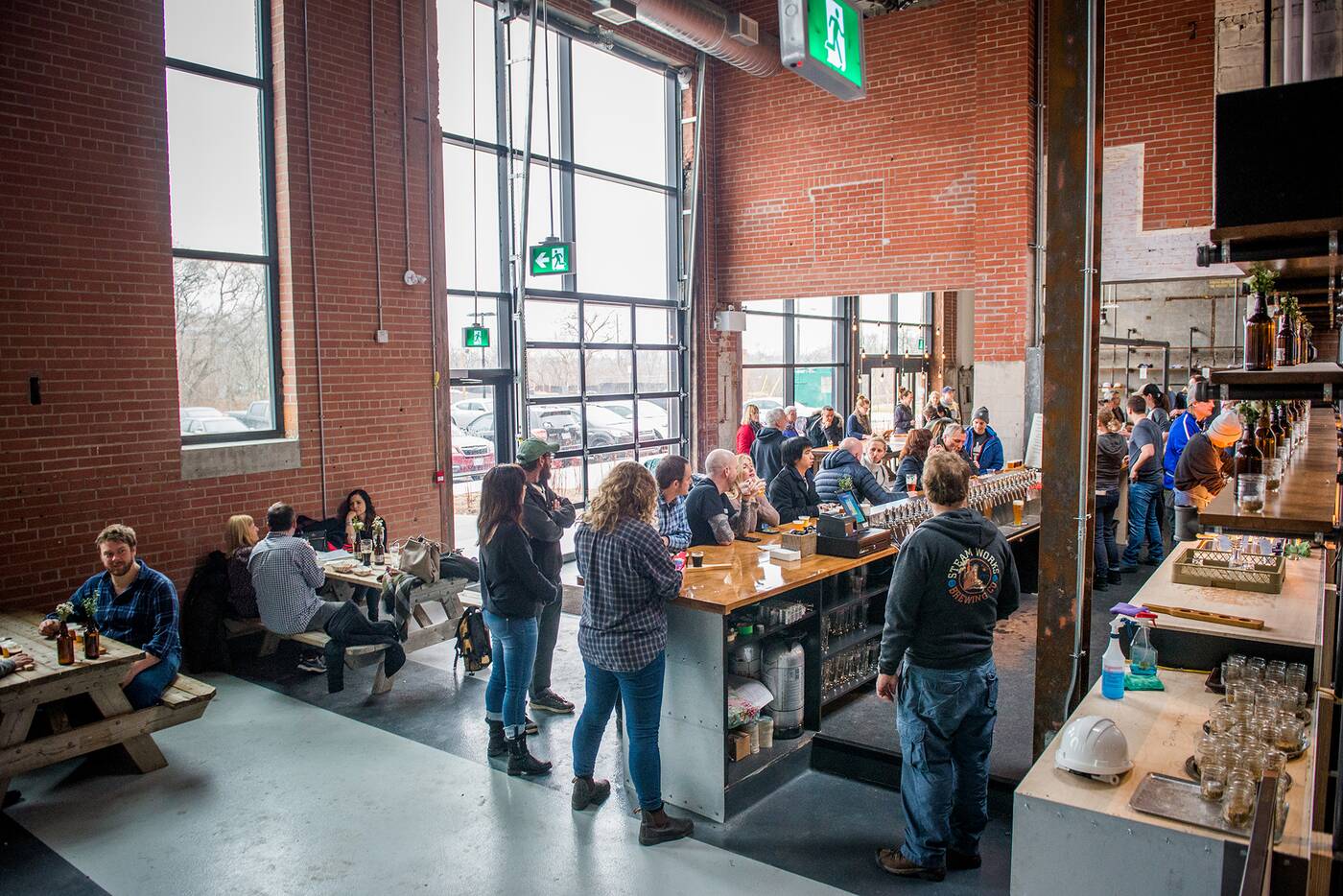 This street has been bumping for years, and it doesn't seem like it's slowing down any time soon. Depending on who you ask, its glory days might be several years past, but a revolving door of restaurants, cafes, and clothing stores keep this street consistently on-trend, while staples like Pho Tien Thanh, Oddseoul, Bellwoods Brewery hold it down.

If you frequent the upper reaches of Scarborough, you'll know all about the mind-blowing number of Asian eateries here. Near Midland and Steeles, this winding street is home to a multitude of plazas with scores of rare cuisines, serving everything from some of the best Hong Kong-style milk tea in the city (looking at you Marathon) to coconut hot pot.

Sitting directly next to Sterling is another quiet Bloordale Village street, where contemporary art galleries abound. Spacious industrial buildings and old auto body shops make the perfect home to art spaces like the Daniel Faria Gallery, or the Robert Kananaj. The Scrap Metal Gallery is right next door, too, if you're looking for small artsy destinations.

If you like drinking IPAs with the slight scent of animal carcass wafting through the air, you'll love this gritty street in the Stockyards, a.k.a. The Aleyards. The former meatpacking district has become a fascinating centre for beer-making, with Shacklands, Junction Craft Brewing, and Rainhard forming a trifecta of breweries, best explored by foot or bike.