This is the perfect Toronto street before it won't be

Like anything worthwhile, this street – a small 1.4 kilometre piece of pavement just north of Dupont – isn't conventionally good looking. In fact, it's still quite ugly despite years of people pointing out how ugly it is.

There are no photogenic murals worth Instagramming on this street, and architecture here retains a certain squatness that is distinctly warehouse-like. 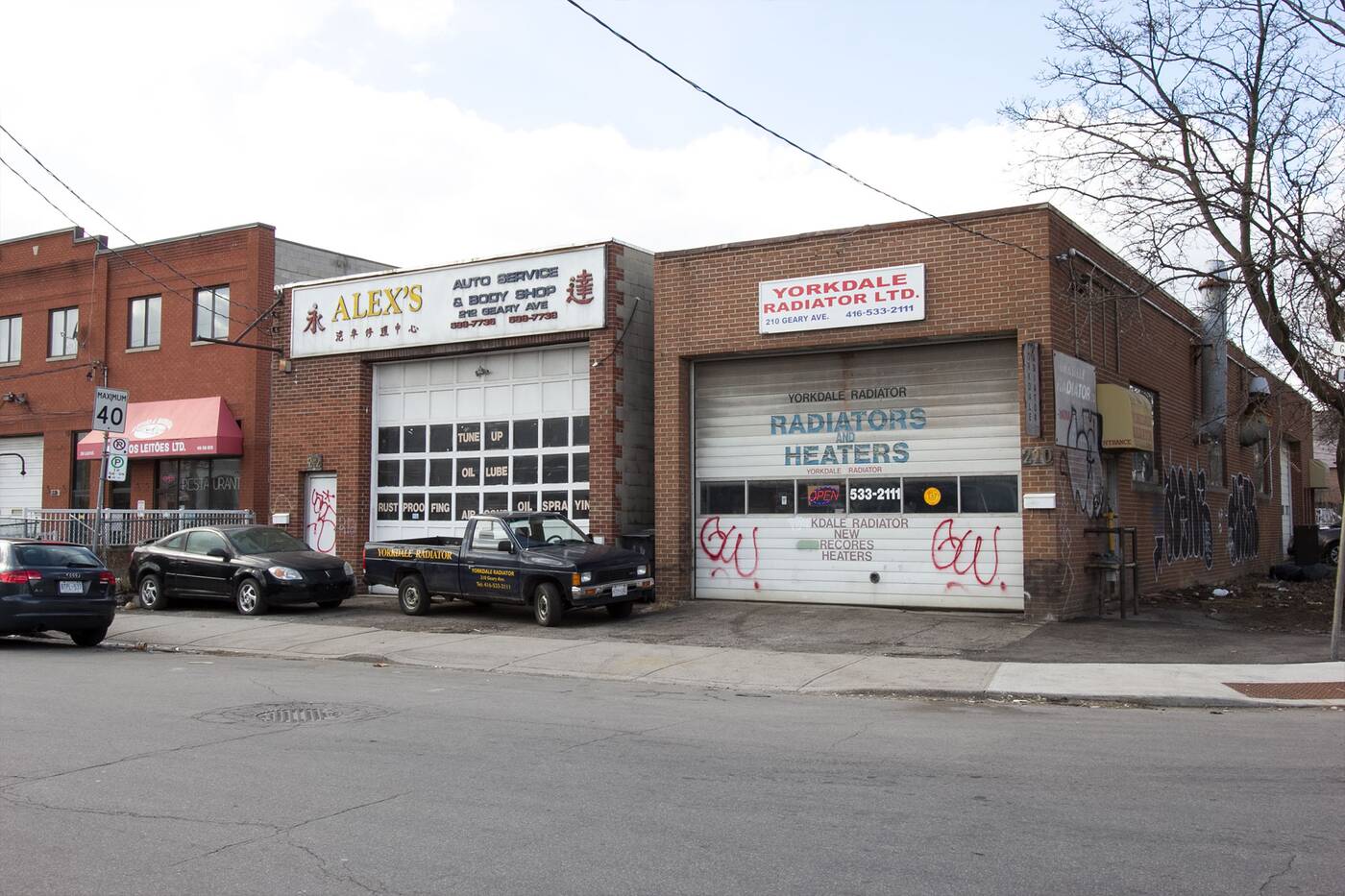 During the day, the area is populated by pickups, delivery trucks and city maintenance vehicles, while the onslaught of traffic on Dufferin and Dovercourt makes a linear walk on this stretch near impossible.

But beneath its industrial surface, Geary Avenue is boiling over with an entrepreneurial energy and a smattering of mismatched businesses that are unique to Geary alone. 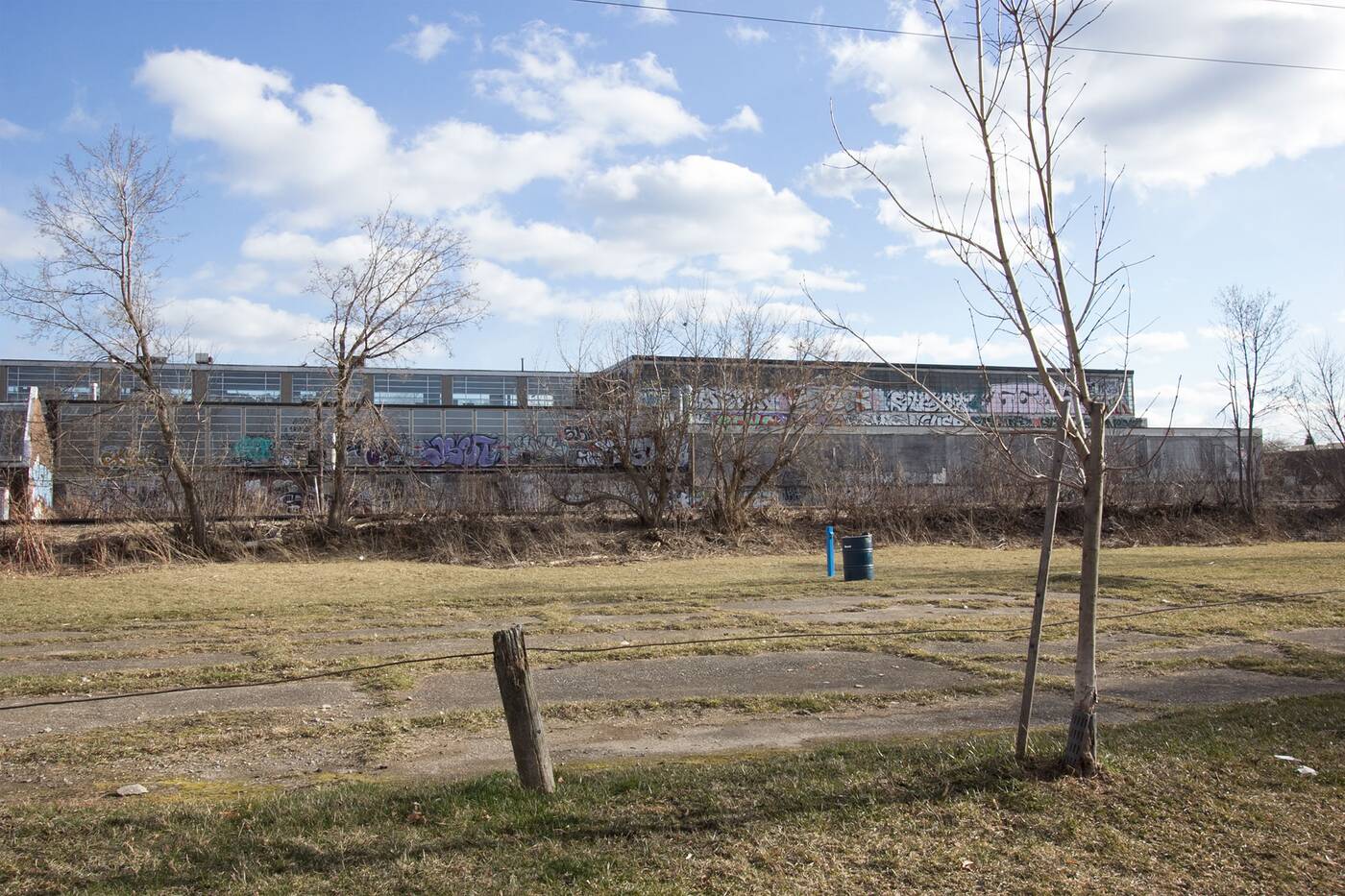 Geary contains a number of small parkettes that line the street.

Contained between the CP rail tracks lined with well-maintained but boring parkettes to the south, you'll find everything from auto and appliance stores to a contemporary Canadian furniture shop and a beekeeping company dotting this stretch. 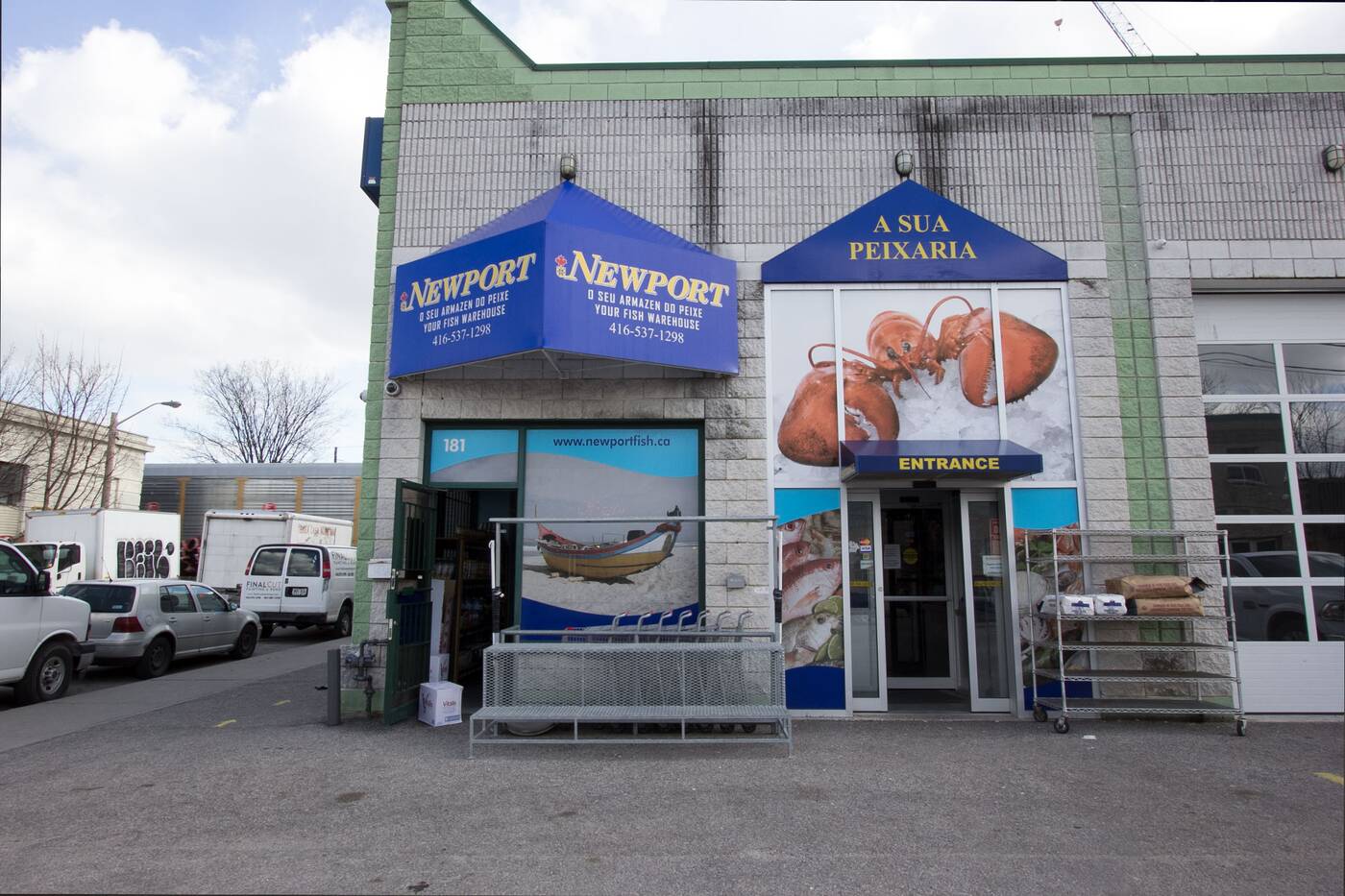 Newport Fish Importers is a fish market and grocery store that serves the nearby residents. 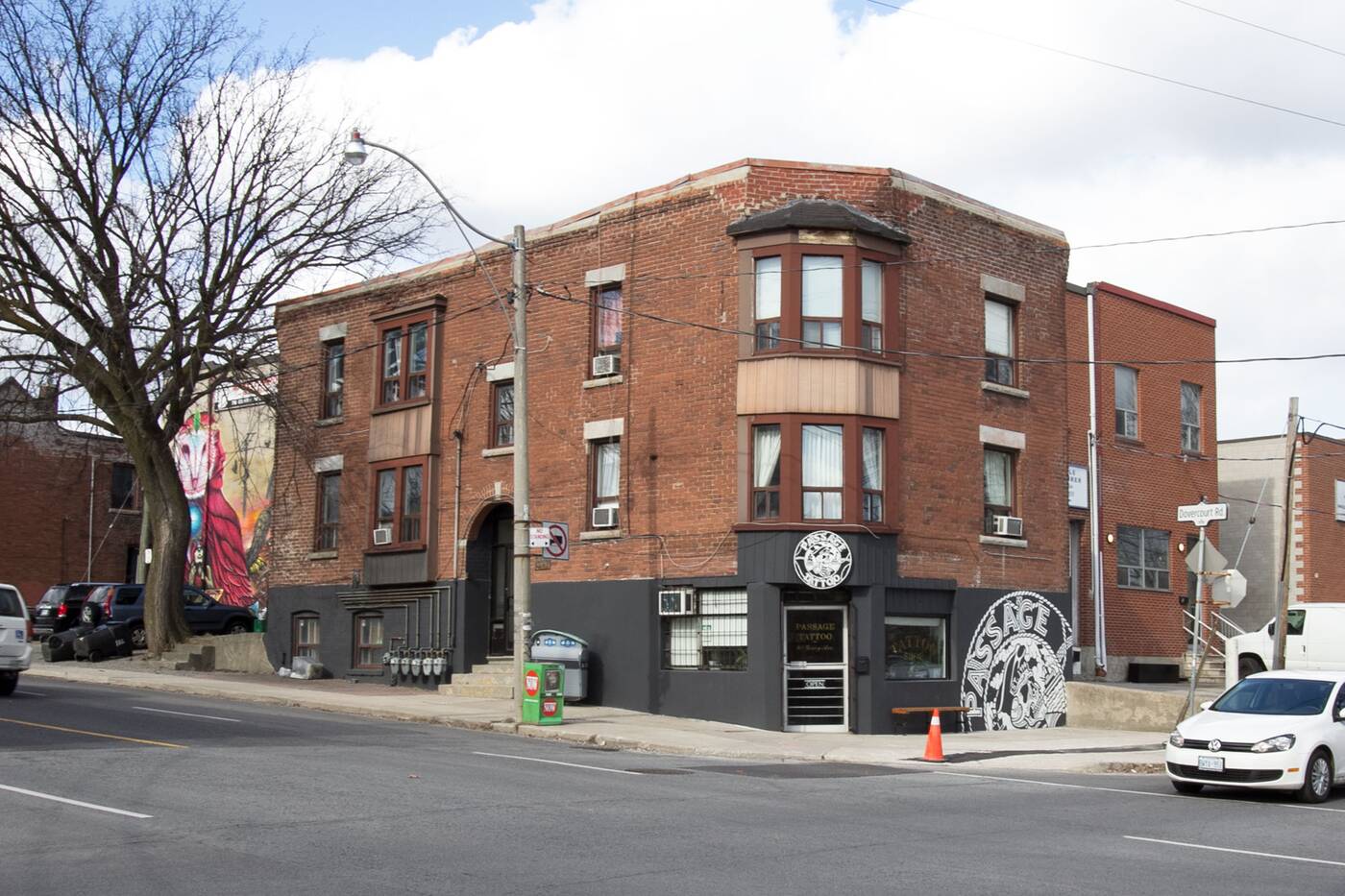 Passage Tattoo sits right at the corner of Geary and Dovertcourt.

Then there are the more creative endeavours, like veteran ink artist Jay Decator's Passage Tattoo – one of the best in the city – and workspaces like Sixpenny Architectural Fabrication.

The common thread between these businesses is that they're all hands-on: run by independent owners who can usually be found on the ground, working alongside the rest of their employees as the backbone of shops that are really good at what they do. 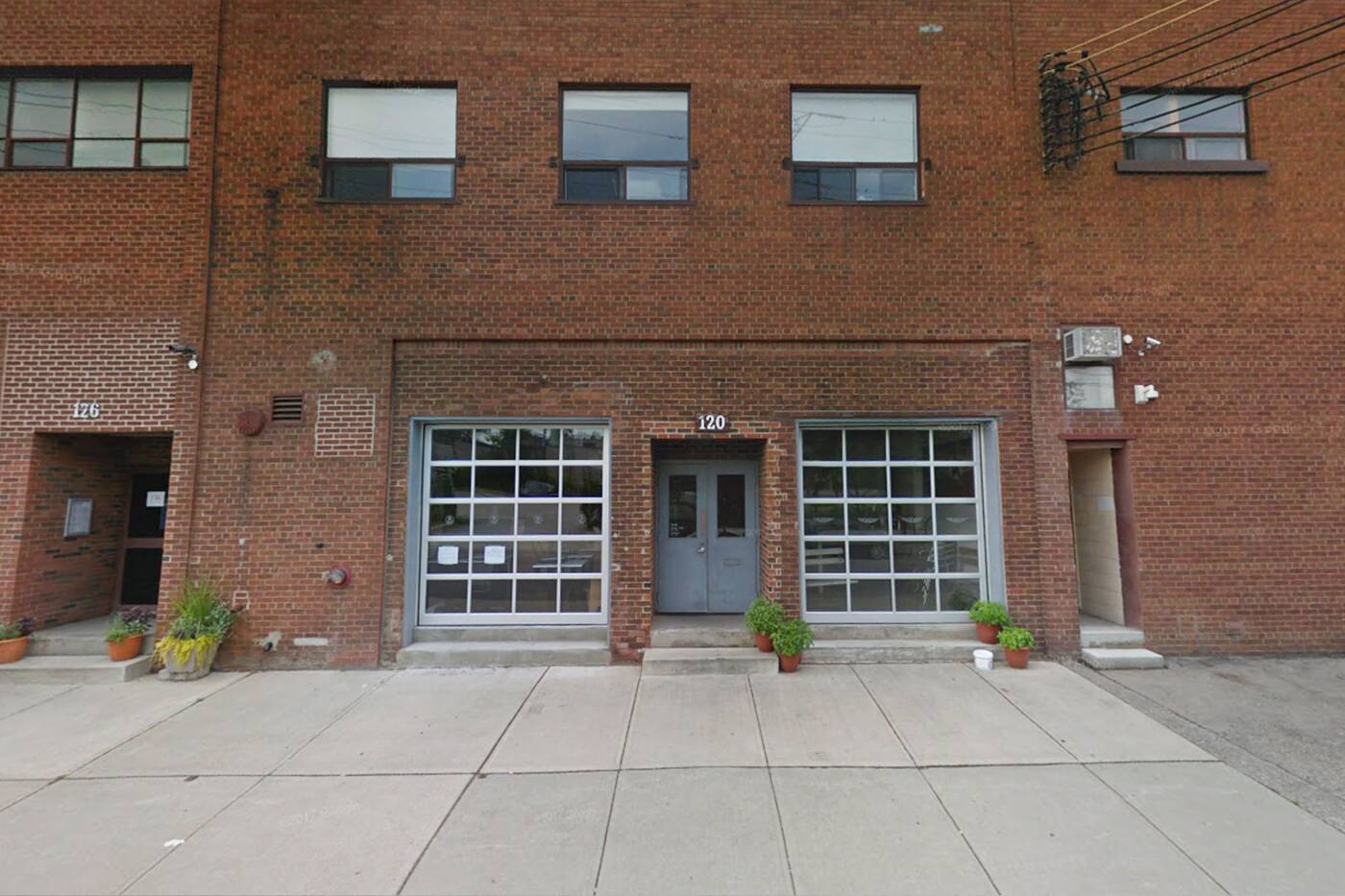 The Dark Horse Espresso bakery cafe sits in the Artisan Factory, which used to produce textiles.

"I think it's the entrepreneurial spirit up here," says Will Docherty, the manager of production at Geary's Dark Horse. "It's just people who are extremely passionate about what they do."

Will, who has been working in Dark Horse's Geary location for nearly two years, says the area consists of "well-grounded" businesses and customers who exhibit very little need to be competitive with another. 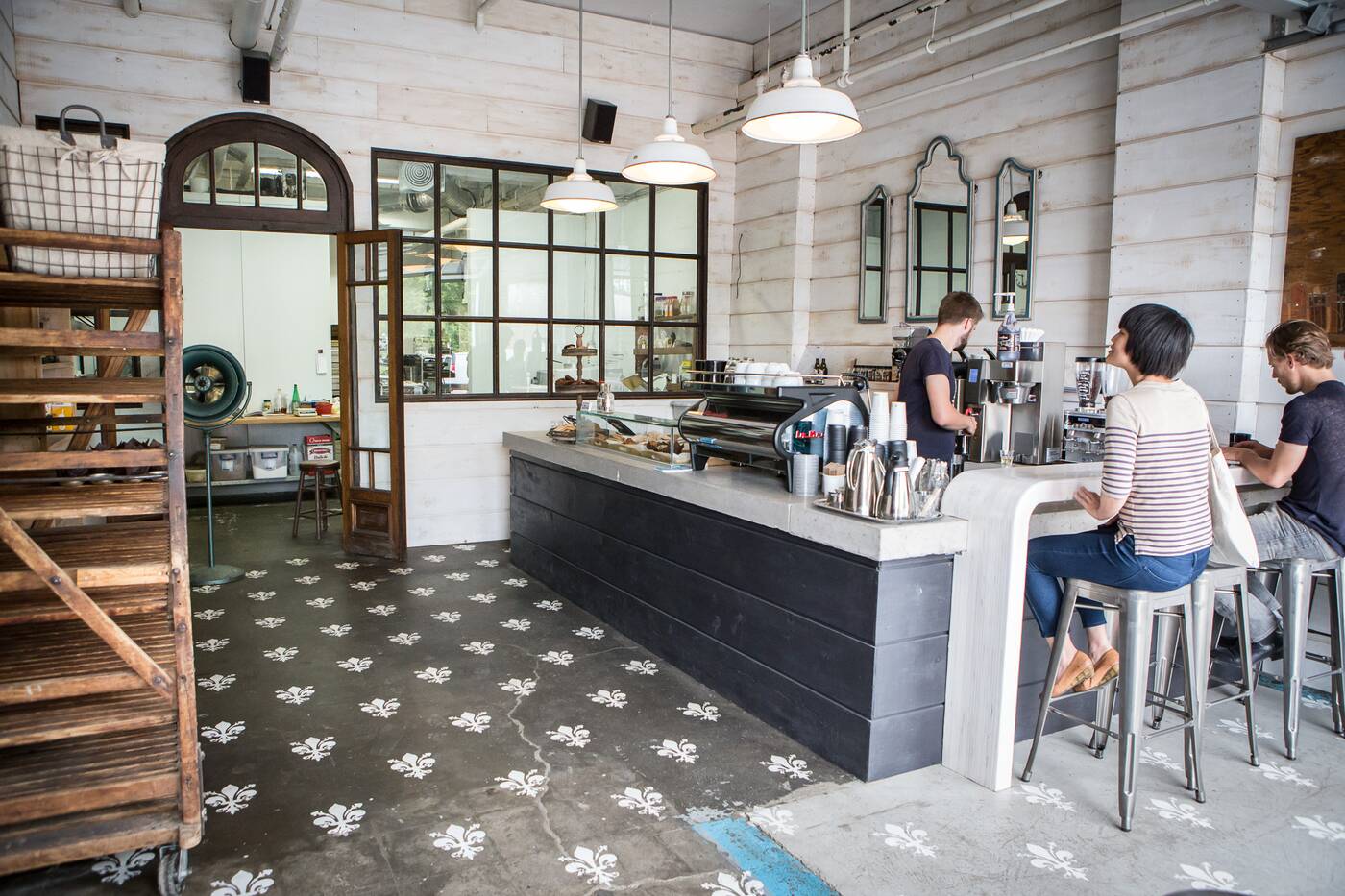 "There’s enough competition in Toronto that we can all share," says Docherty. "And I think that’s a very acknowledged thing around here."

Serving as the brand's bakery, Dark Horse operates from inside the Artisan Factory, a former textile production building that houses several other notable businesses like PARTISANS, the design group behind Bar Raval and Union station's revitalization. 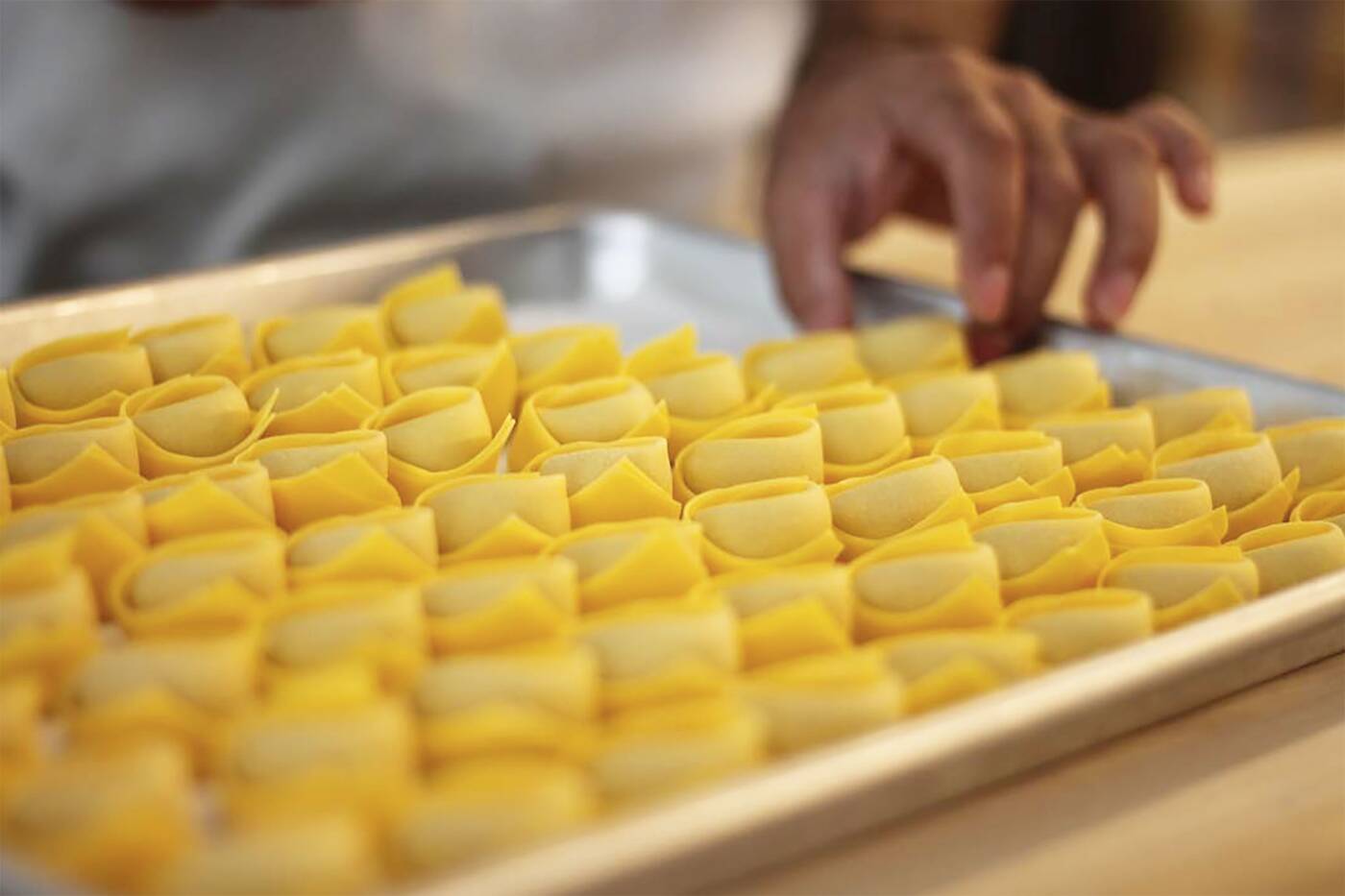 The brand shares the space with another newcomer of note: Famiglia Baldassarre, the Italian egg pasta wholesaler making waves across the city with its back-to-the-roots recipes.

Highly publicized, the arrival of Leandro Baldassarre – formerly of the Michelin-starred Italian restaurant Del Pascatore – has guided the public eye towards Geary more than ever. 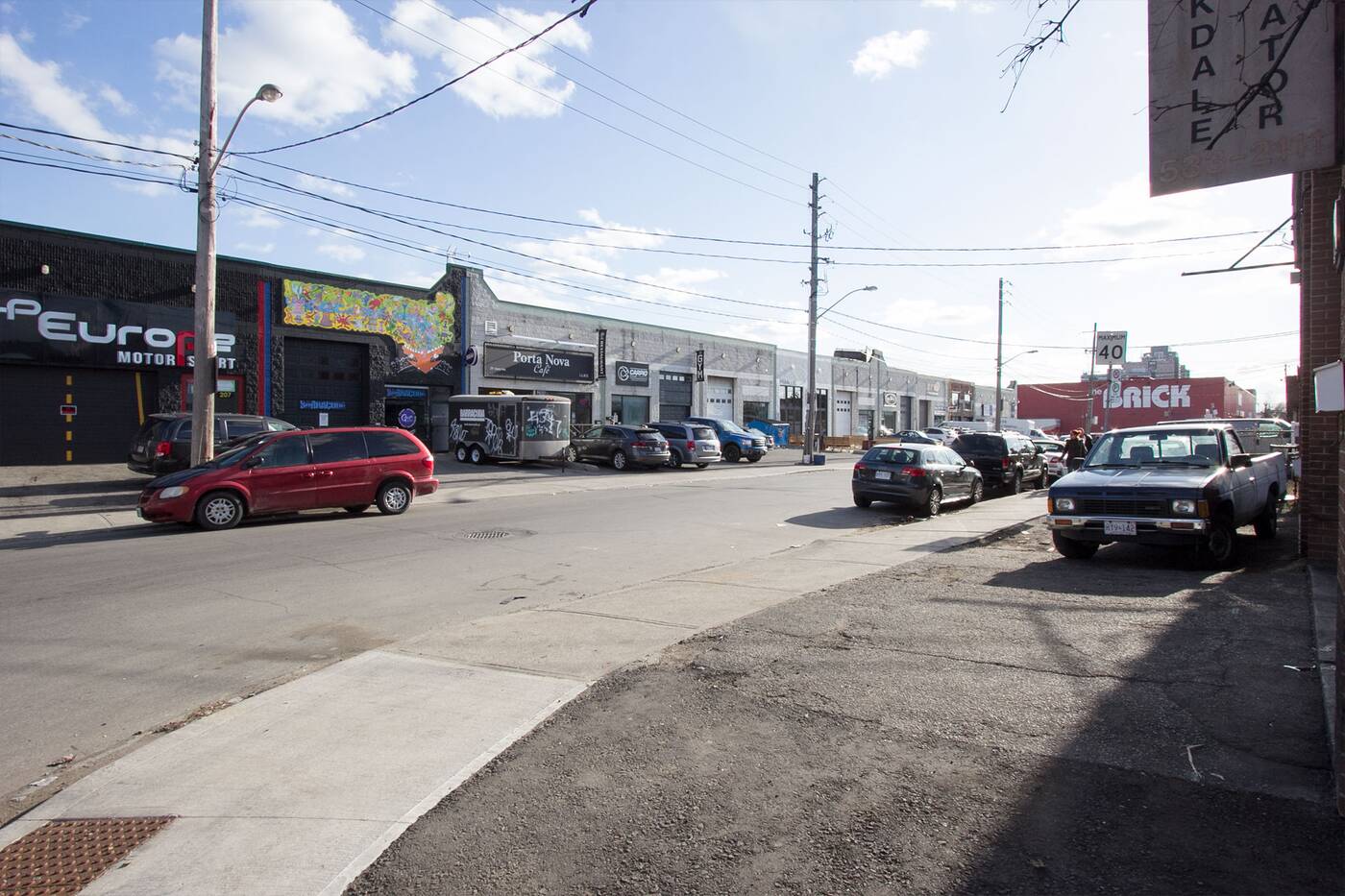 Geary Avenue is most populated with cafes and restaurants between Bristol and Ossington Avenue.

And if you move further West towards Bristol Avenue, you'll begin to notice the subtle signs of the area's trend toward destination restaurants and bars.

The spacious new Middle Eastern restaurant Parallel may be the most drastic change to Geary's landscape, providing the street with a more elevated dine-in experience. Menu items like tahini smoothies are rare in the city, let alone the street, and worth traveling from afar for. 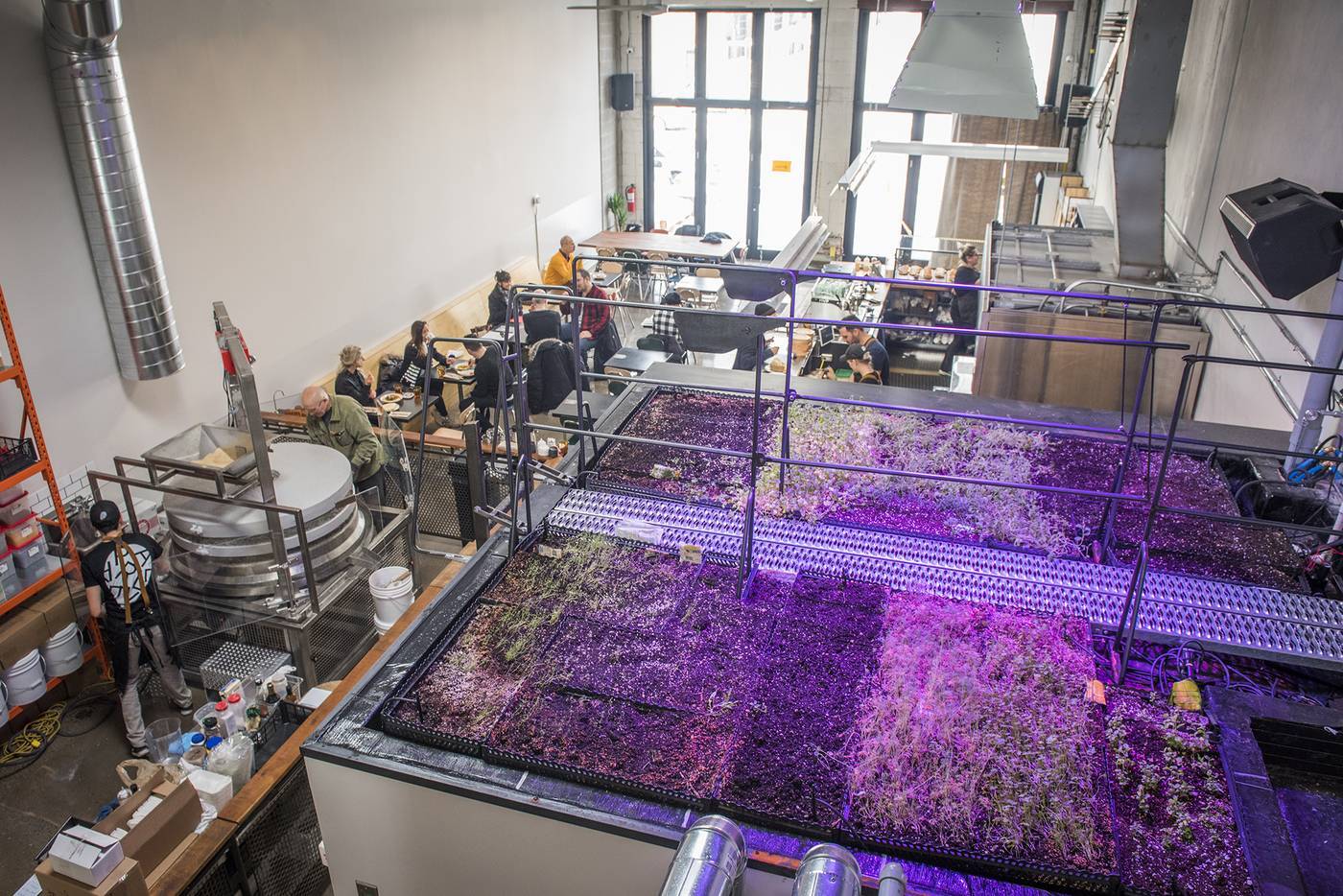 Parallel has its own herb garden and makes their tahin in-house. Photo by Hector Vasquez.

They also wholesale and make their own tahini in-house, as well as tend to a beautiful herb garden kept above the washroom, thus keeping in line with Geary's industrious attitude. 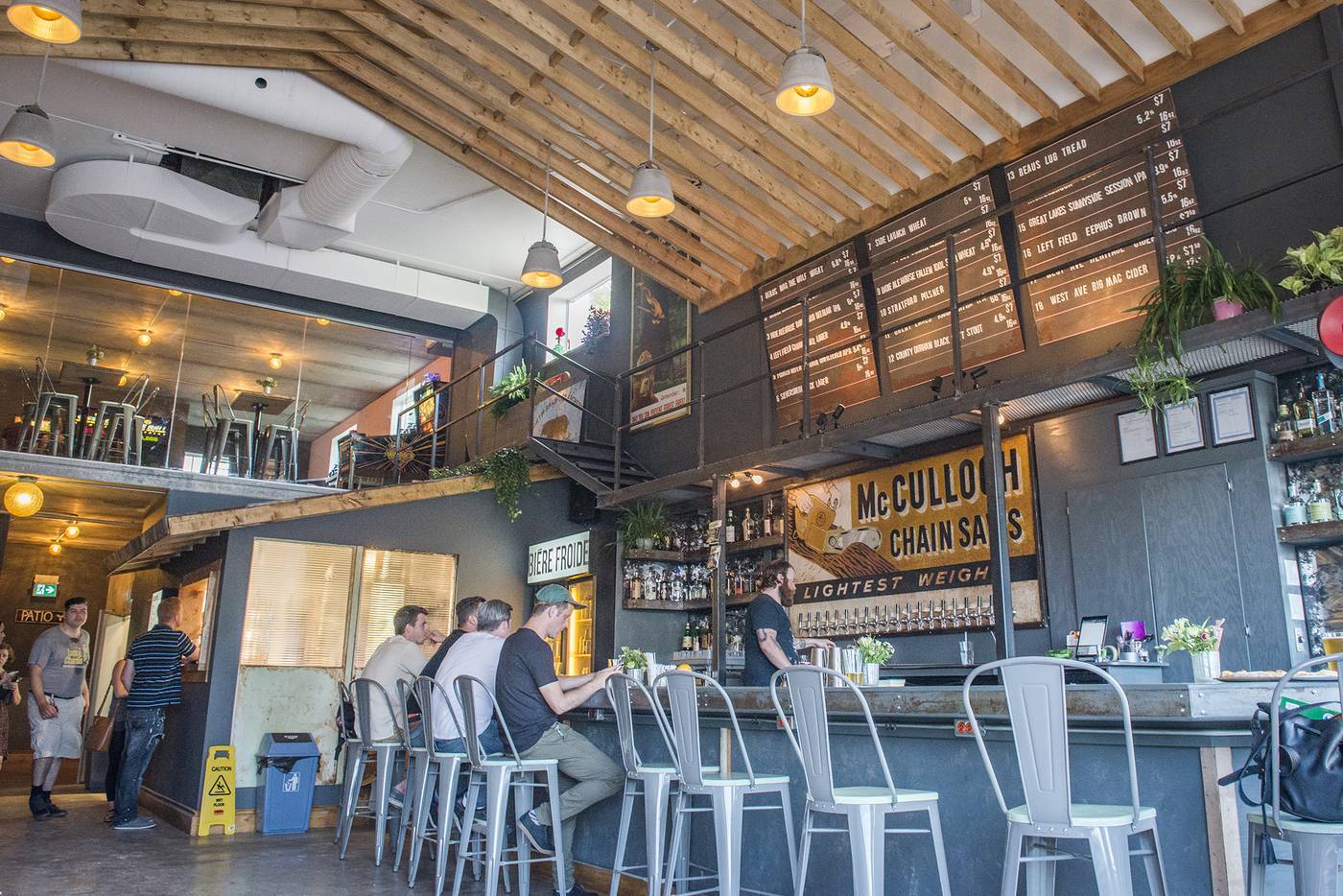 The Greater Good serves up slices of North of Brooklyn Pizza and craft beer. Photo by Hector Vasquez.

In the same lot, The Greater Good serves North of Brooklyn Pizza slices and local craft beers, bringing a taste of Get Well to the corner of Geary and Dufferin to fairly large nighttime crowds.

And two streets down, Blood Brothers Brewery manufactures its own beers in a retro-fitted century-old building on Bartlett Avenue. For now, it's the only other option for craft libations on the street. 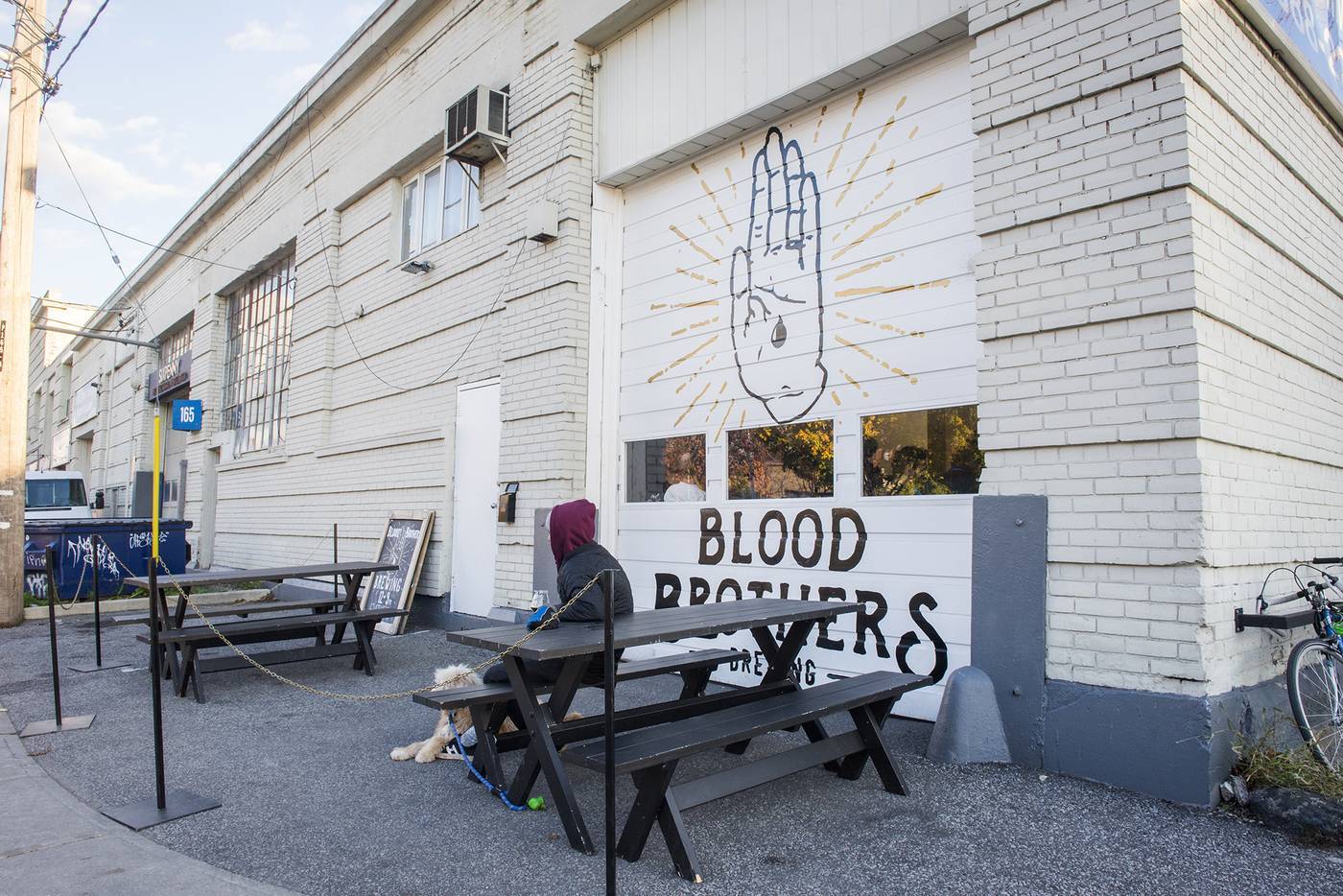 Blood Brothers Brewing's second location right on Geary is larger than its first on Westmoreland. Photo by Hector Vasquez.

Having outgrown their former space on Westmoreland, brothers Dustin and Brayden Jones say the last two years has seen nothing but growth for their business.

"Geary's been getting so much attention lately," says Dustin. "There's a lot of cool stuff to see."

The pair suspect that the next five to ten years will bring even more dramatic changes. With the tearing down of Galleria Mall and the massive redevelopment planned to take its place, it's evident that the area is about to see a total revamp. 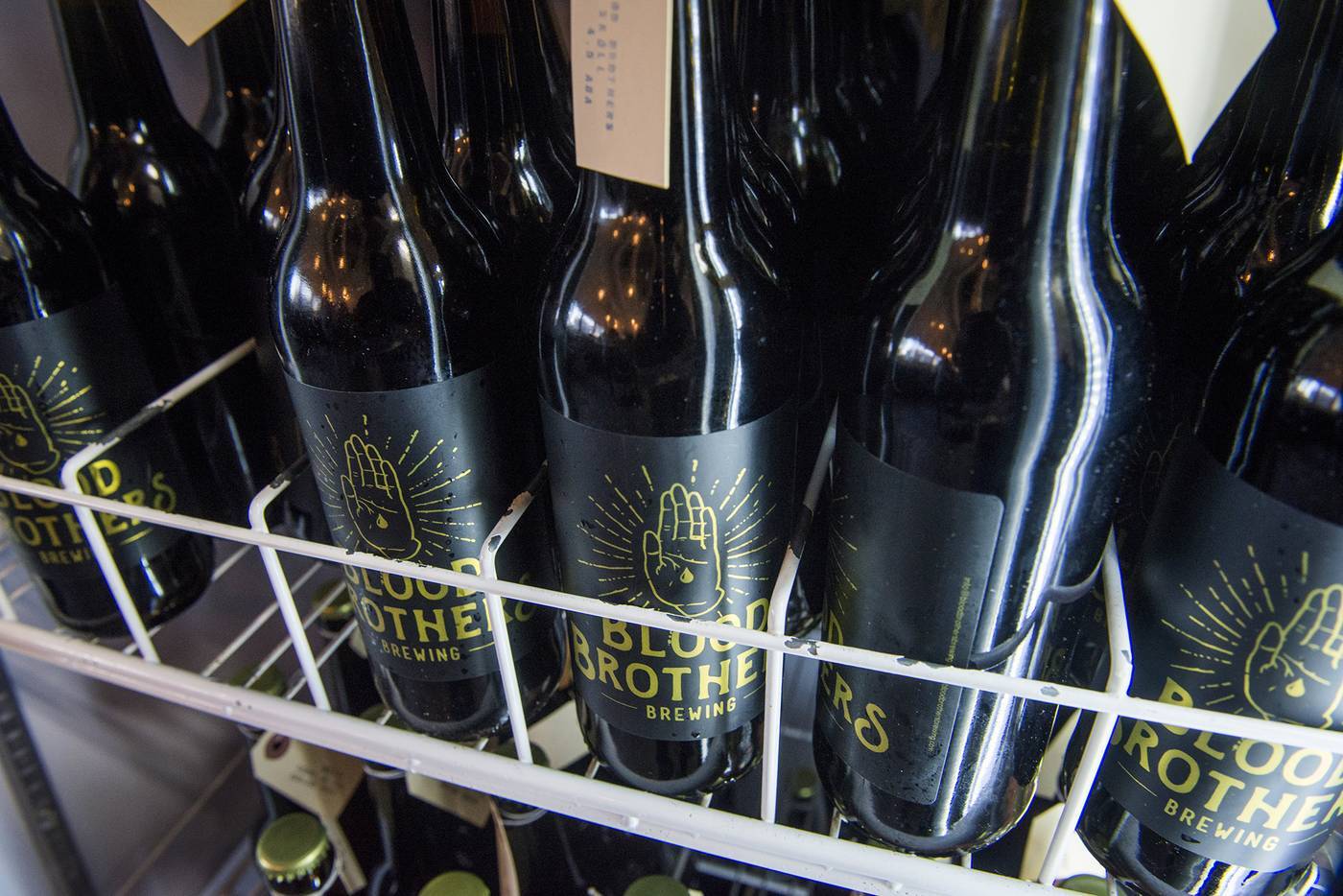 Blood Brothers bottles some of their brews, but not all. Photo by Hector Vasquez.

“I think you'll see a difference in the type of businesses that start moving out here,” says Brayden. Cheap rent was what drew the brothers to Geary initially, but the two now predict the influx of interest will eventually increase competition and rent.

"People move out here because there’s industrial space left and the rent is affordable, and then you find success and then the neighbourhood drives you out," says Brayden. 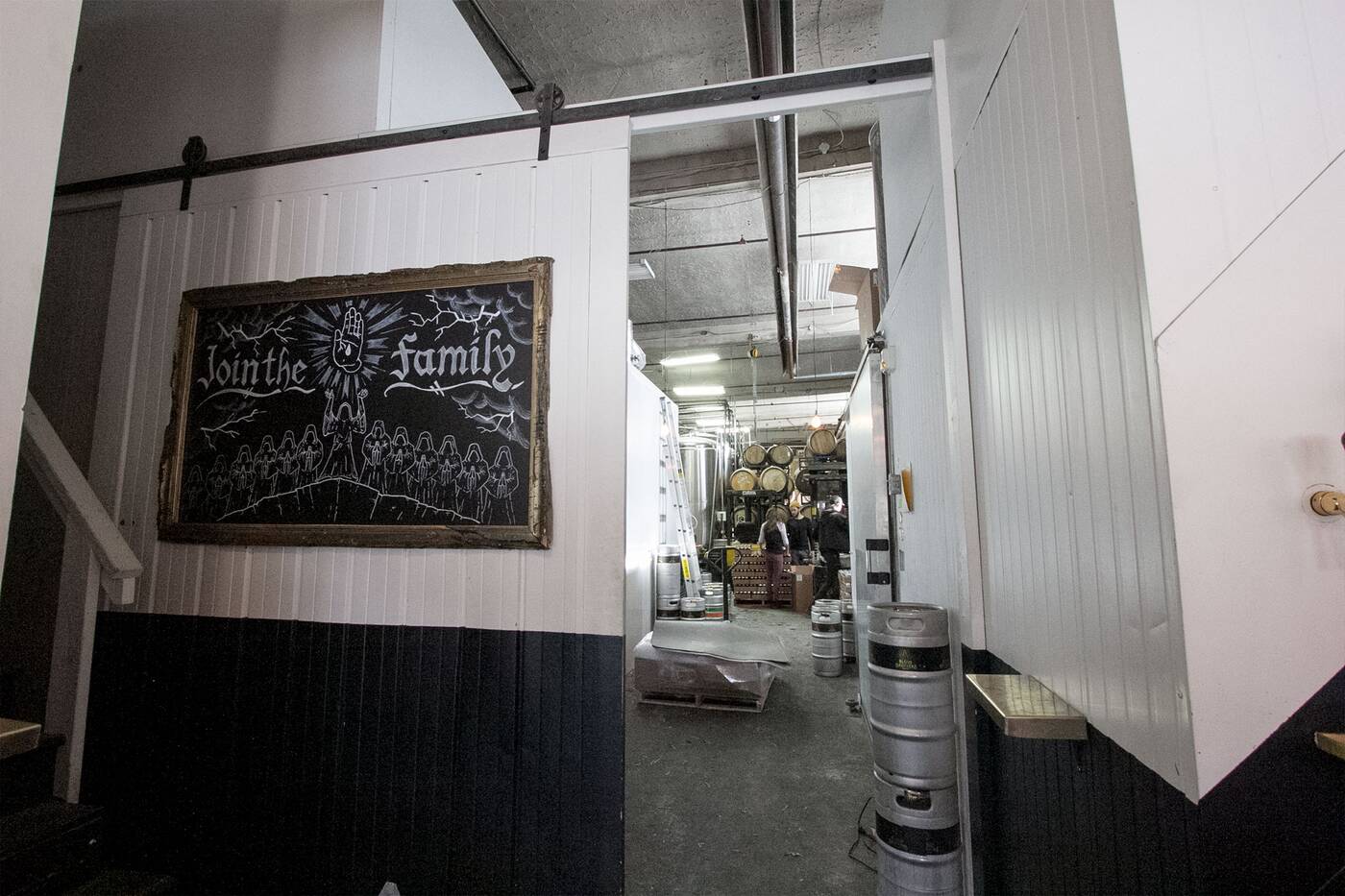 The brewery's interior is retrofitted to include a production area, hidden by a sliding wall. Photo by Tanya Mok.

"Landowners see opportunity and if you have enough money you can make things happen."

But for those mourning the outing of Geary as Toronto's best kept secret: you should know that the ball of change has long been rolling on the neighbourhood. For years, developers have been approaching local businesses and scouting areas for fresh real estate on Geary. 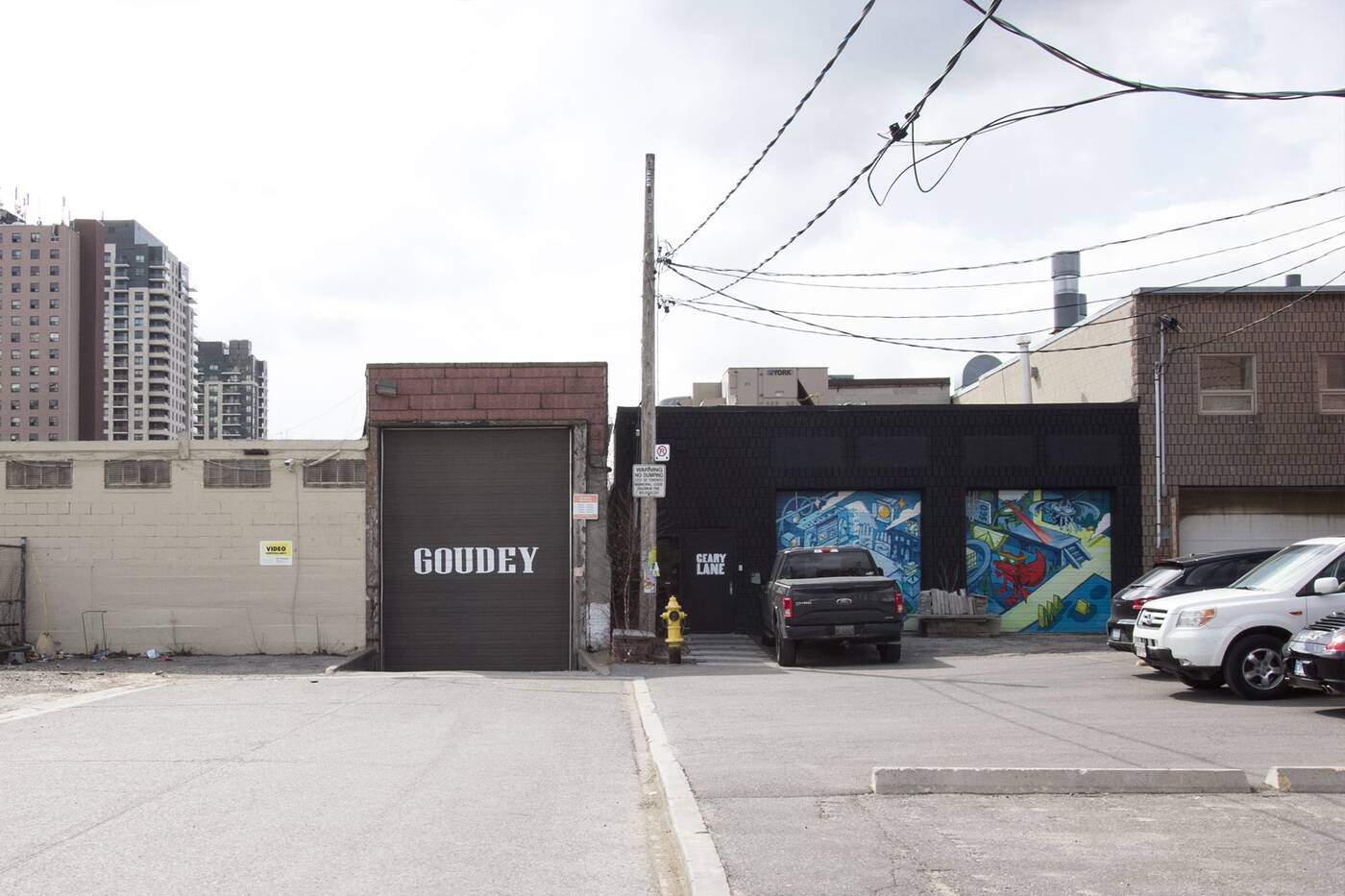 Geary Lane is the furthest western destination on Geary. Photo by Tanya Mok.

Gili Zemer, the co-owner of the music and event venue Geary Lane, says she's been approached with offers for meetings with developers since she moved into the warehouse four years ago.

"Every year I see more and more change, it’s changing quickly," she says. 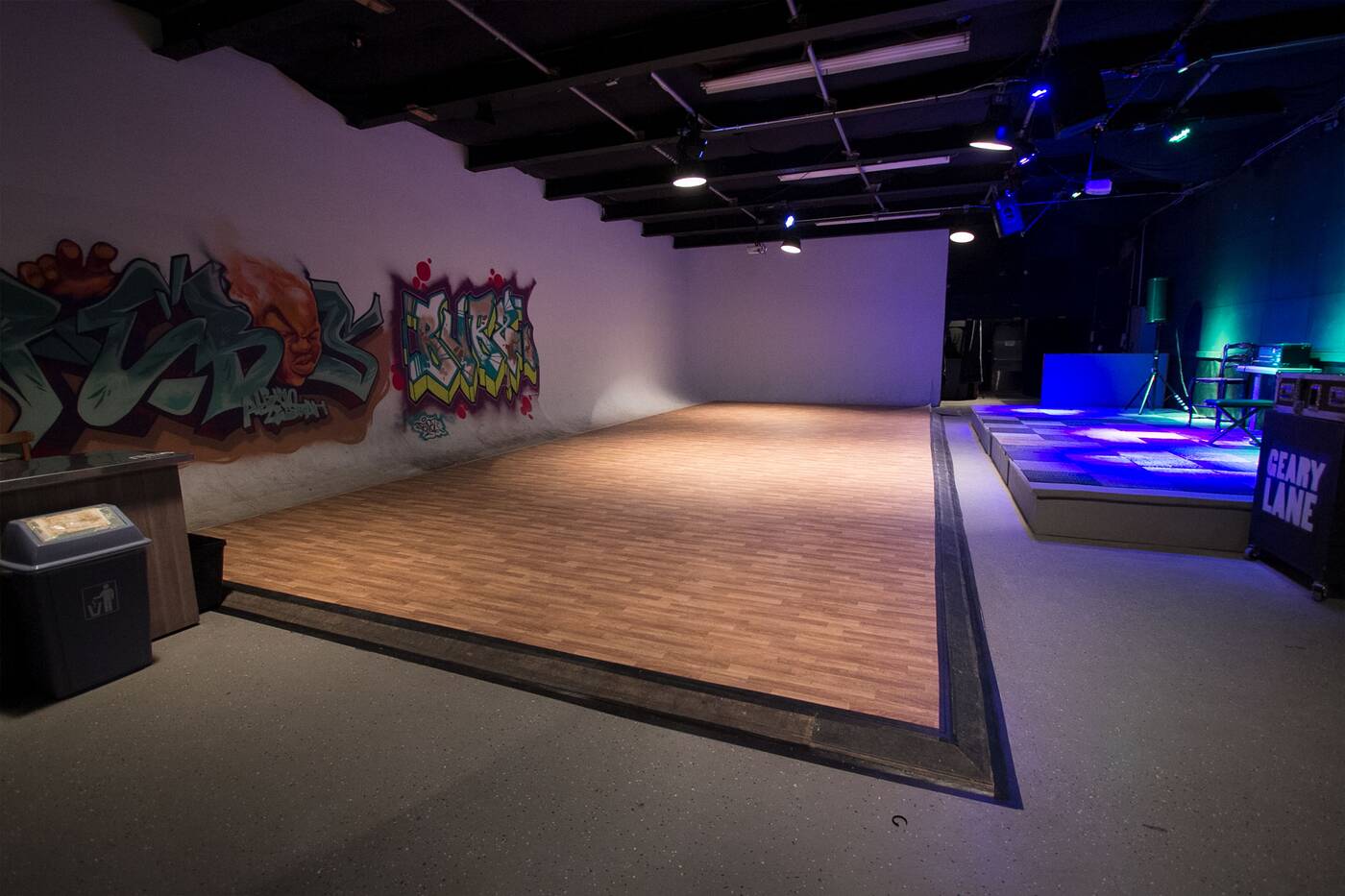 Due to zoning bylaws and noise complaints, Geary Lane no longer hosts performances past 1 a.m. Photo by Tanya Mok.

Geary Lane was at the forefront of the area's music scene revolution of sorts three years ago, with a renegade, DIY vibe that made headlines for breaching Geary's zoning laws with its late night, sometimes rowdy, events.

Joining musical OG Rehearsal Factory just next door and with the quasi-club 76A nearby, the venue has since "found the happy place" between neighbours, zoning laws, law enforcement, and the space for the venue to thrive, says Gilli. 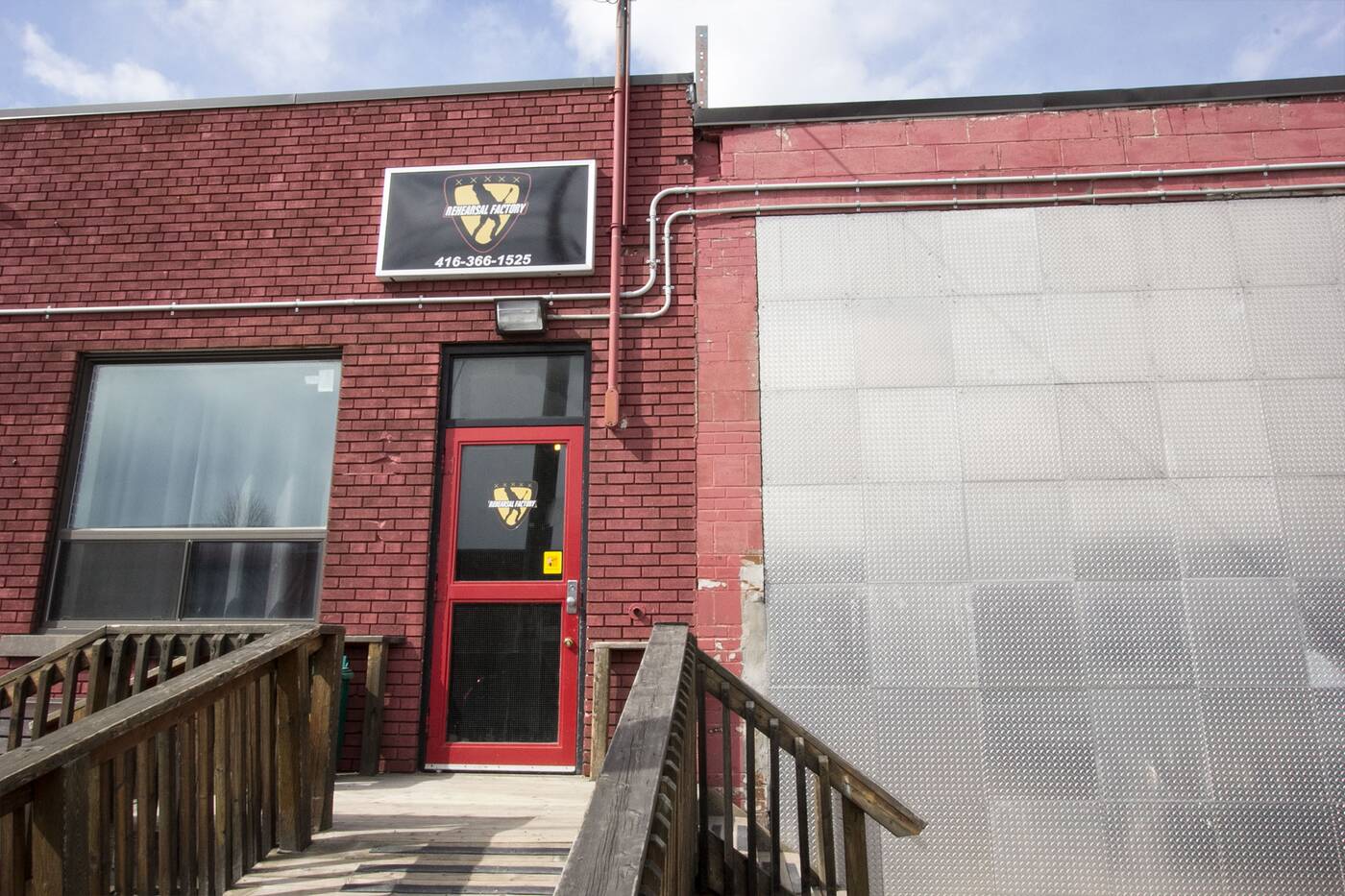 Geary Lane's encounters with the law now seem like so long ago; the Geary of today no longer feels like the grungy street of years past, and despite its industrial exterior, it's evident the area is on the cusp of massive change.

"It's kind of desolate here, you know, it'd be nice if it was a little more vibrant," says Gilli. Looking forward to having more cafe options, she remains optimistic about new life entering the area's old buildings. 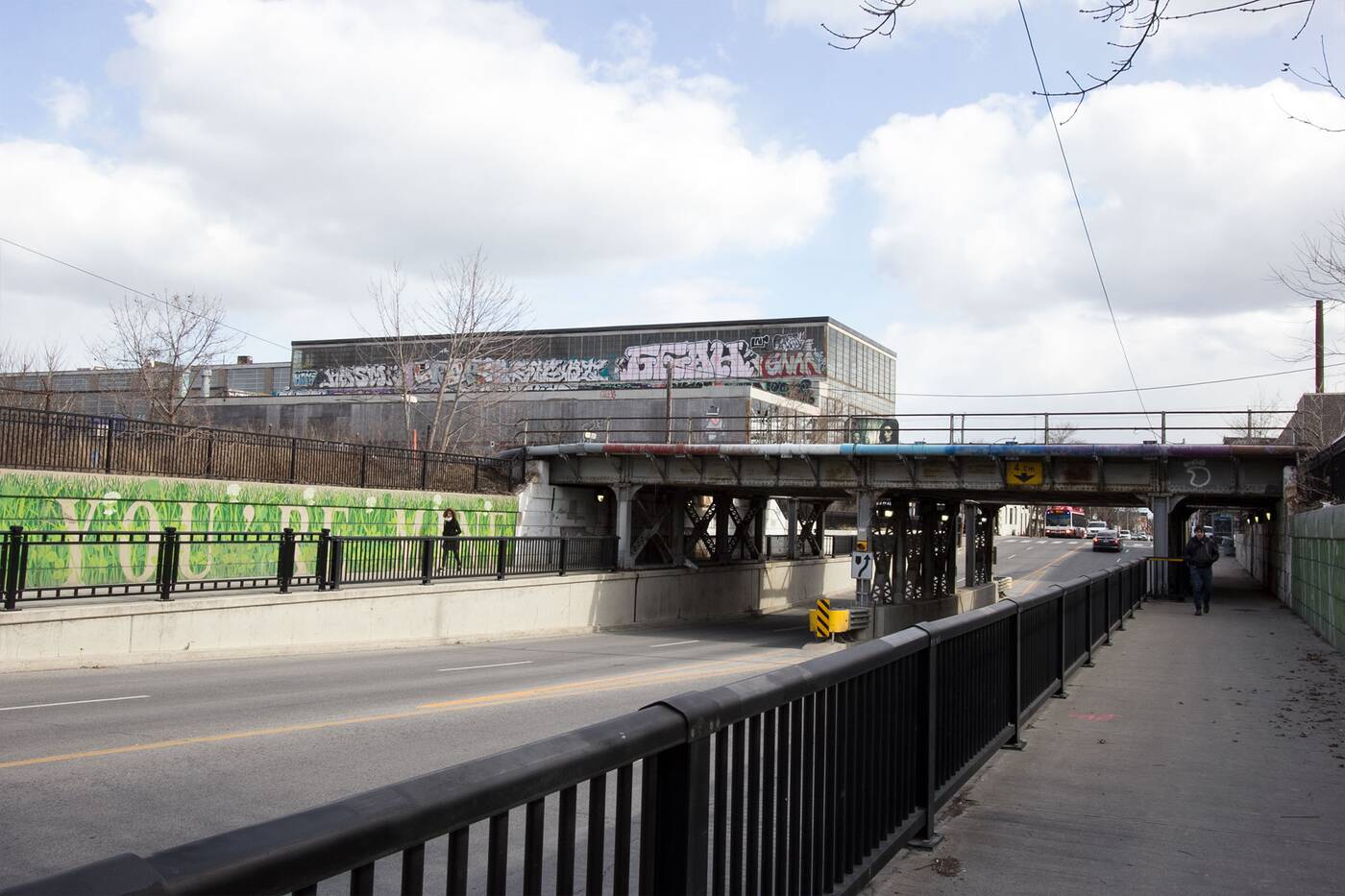 The bridge extending over Dovercourt leads to a desolate area above Geary's grounds. Photo by Tanya Mok.

"The businesses coming in are using what's here as part of their charm," says Gilli. "Instead of trying to change, they're trying to blend and enrich."

Whether or not incoming businesses continue this chameleon approach depends on what their priorities are. At the end of the day, stores that add real value to a neighbourhood don't always have to have a pretty face.