Blood Brothers had humble beginnings on Westmoreland , and though they haven't moved far to a new location on Geary, a fair amount has changed.

They now have a taproom with five drafts available and seating, as well as a substantial amount more room in their brewery area to create and bottle their popular craft beer. 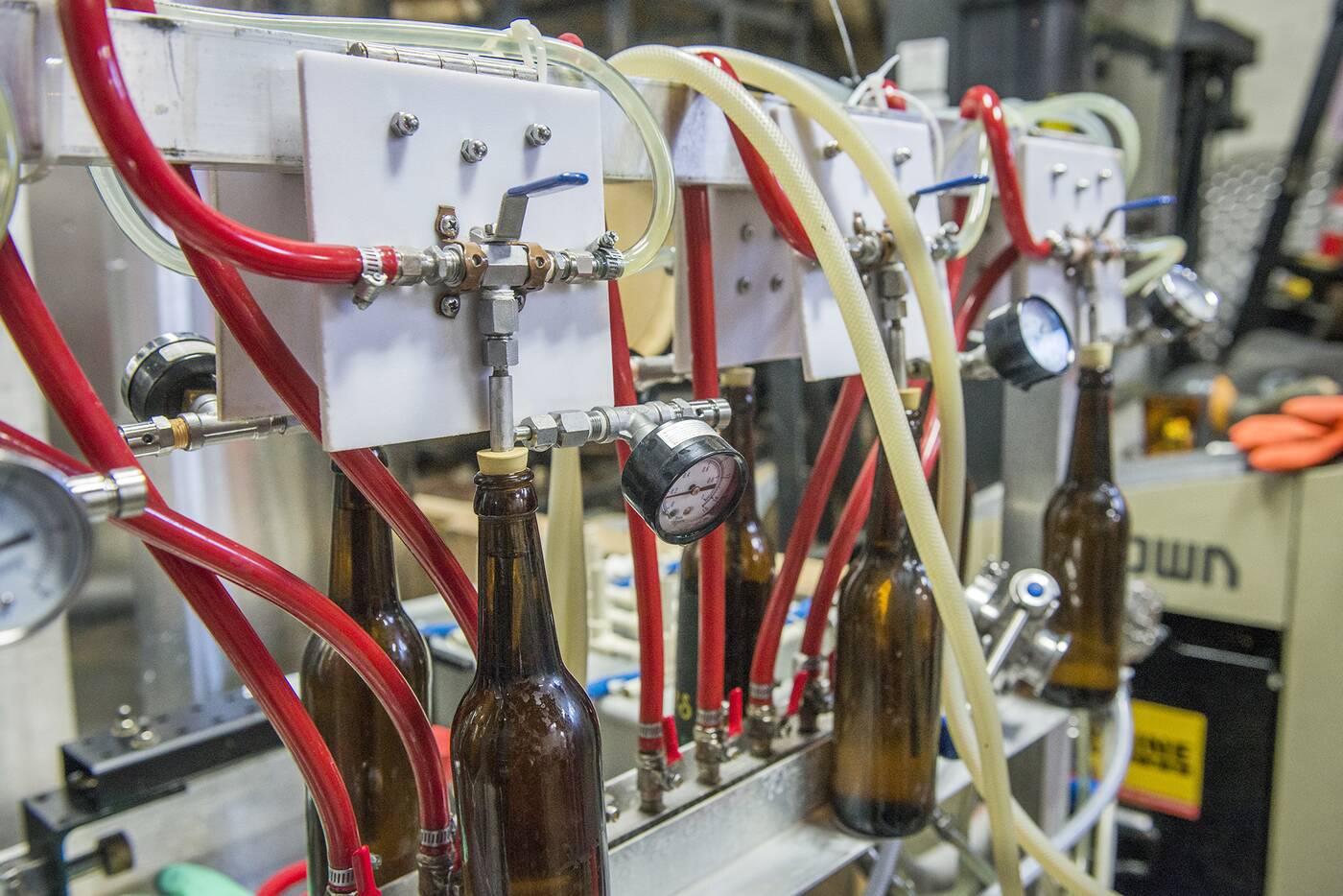 This is the main advantage to the new space, which gives the "Blood Brothers" in question, Dustin and Brayden Jones, triple the fermenting capacity. Friends from Indie Alehouse had told them they were growing out of their space, but they really wanted to stay in the neighbourhood. 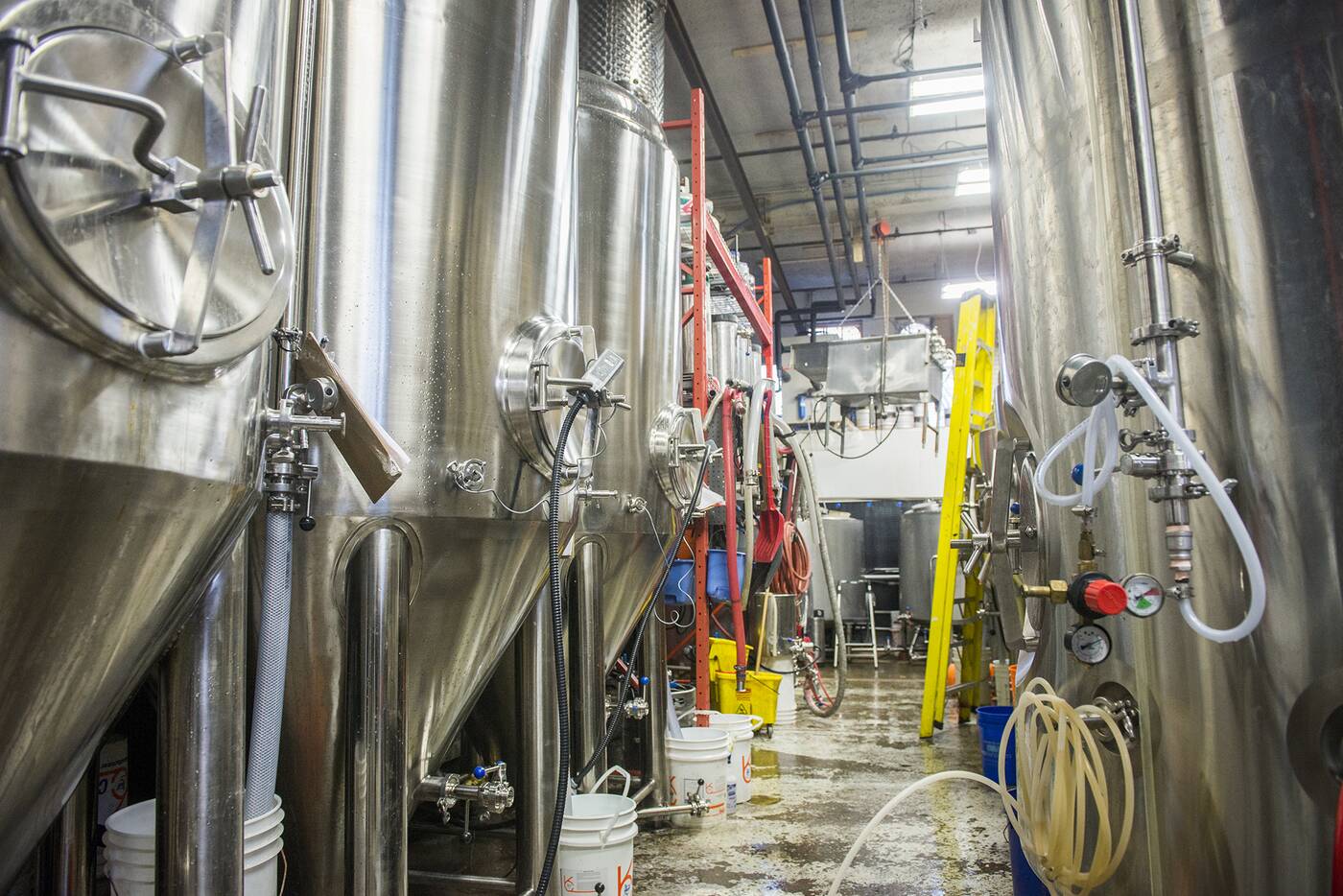 More brewing capacity means they can offer more variations in their taproom that they might never bottle. They now have three ten barrel fermentors that hold 1200 litres and four twenty barrel ones that hold 2400 litres, for a way larger capacity of 3600 litres. 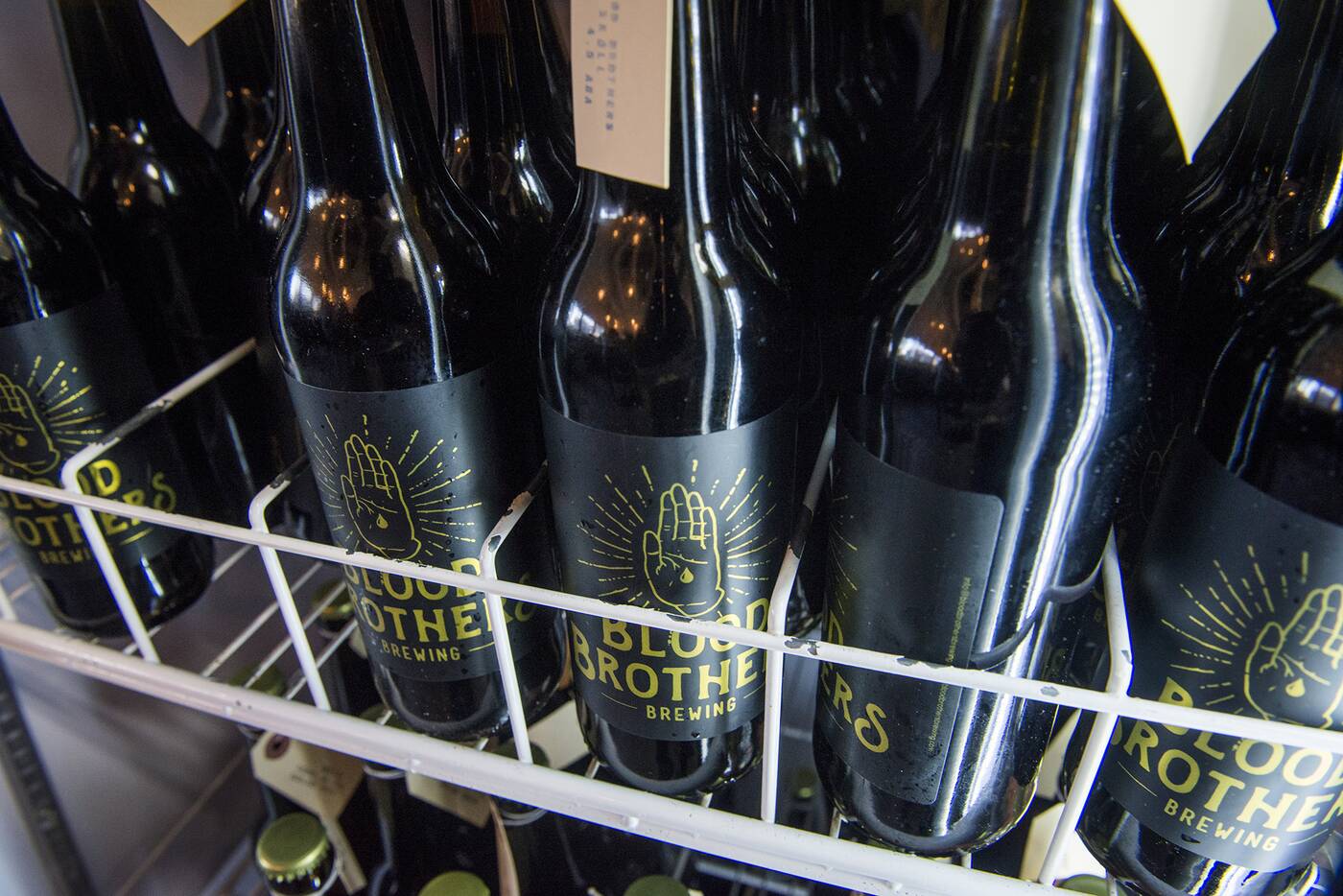 The bottle shop they started out with in their Westmoreland space is still there, and patrons coming in are probably split evenly between those who go and stay. Bar seating that extends to a ledge against one wall and then out towards a garage door in summer creates a U shape. 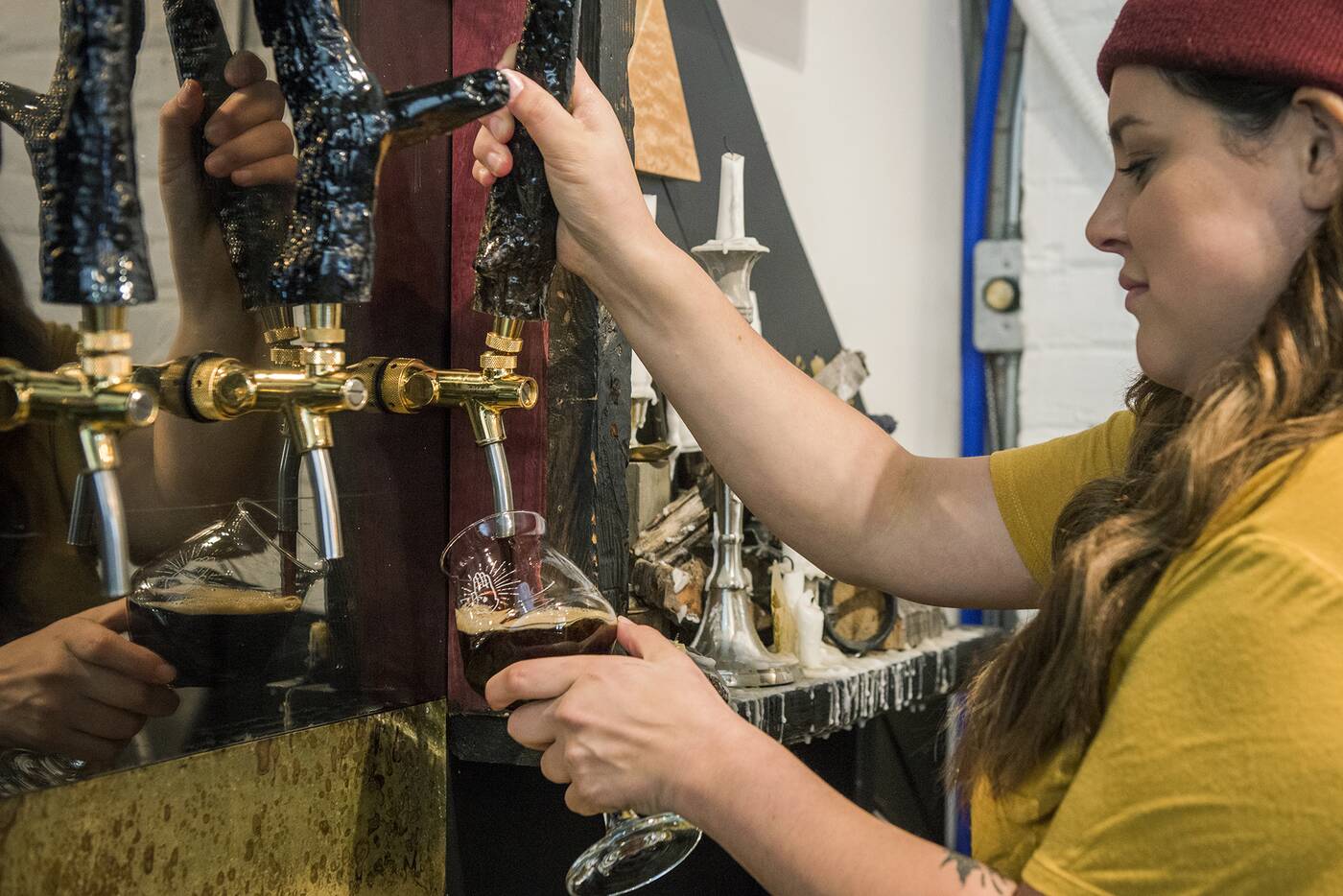 The Skoll Milk Stout is on tap ($4.25 for 12 ounces) and in a bottle ($5) when we visit. At 4.5% ABV, it's pretty drinkable considering stouts are normally heavy and bitter, with dark notes of chocolate and coffee and a slightly sweet finish. 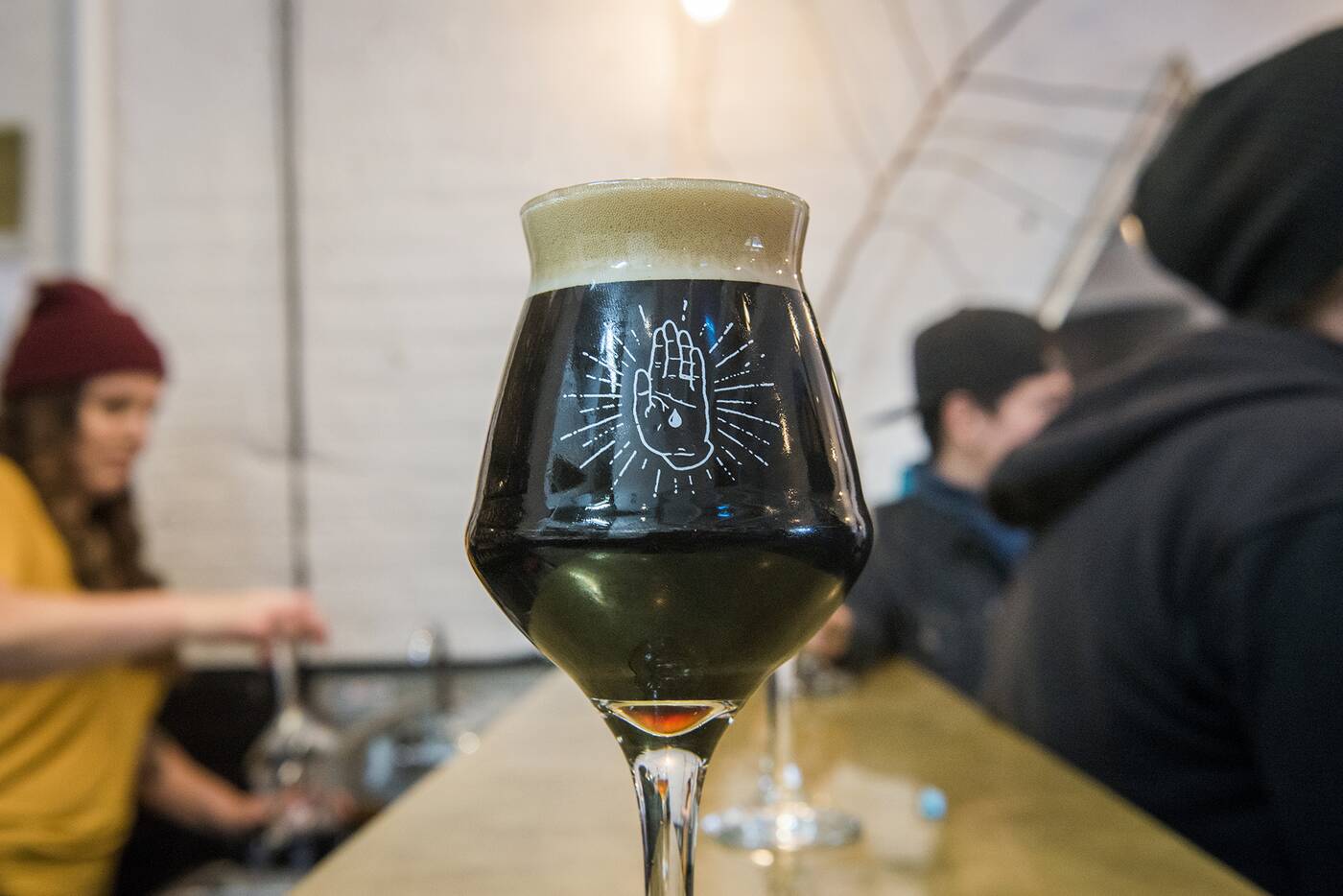 Skoll is a wolf character from Norse mythology that chases celestial bodies through the sky with her brother. 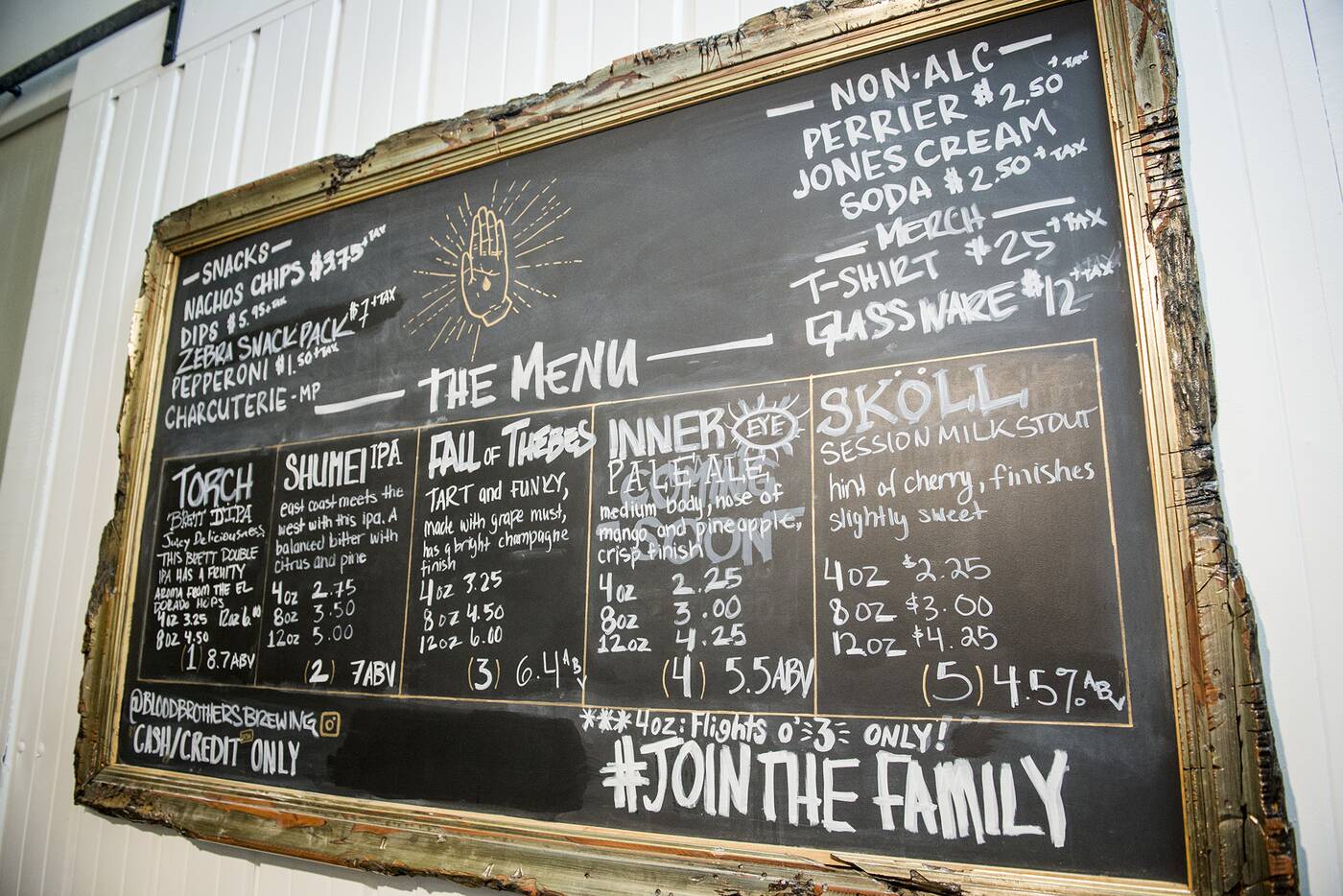 They added a range of snacks to the fridge too, getting around rules set in place surrounding operating a tap room and also showing guests some local snack offerings. 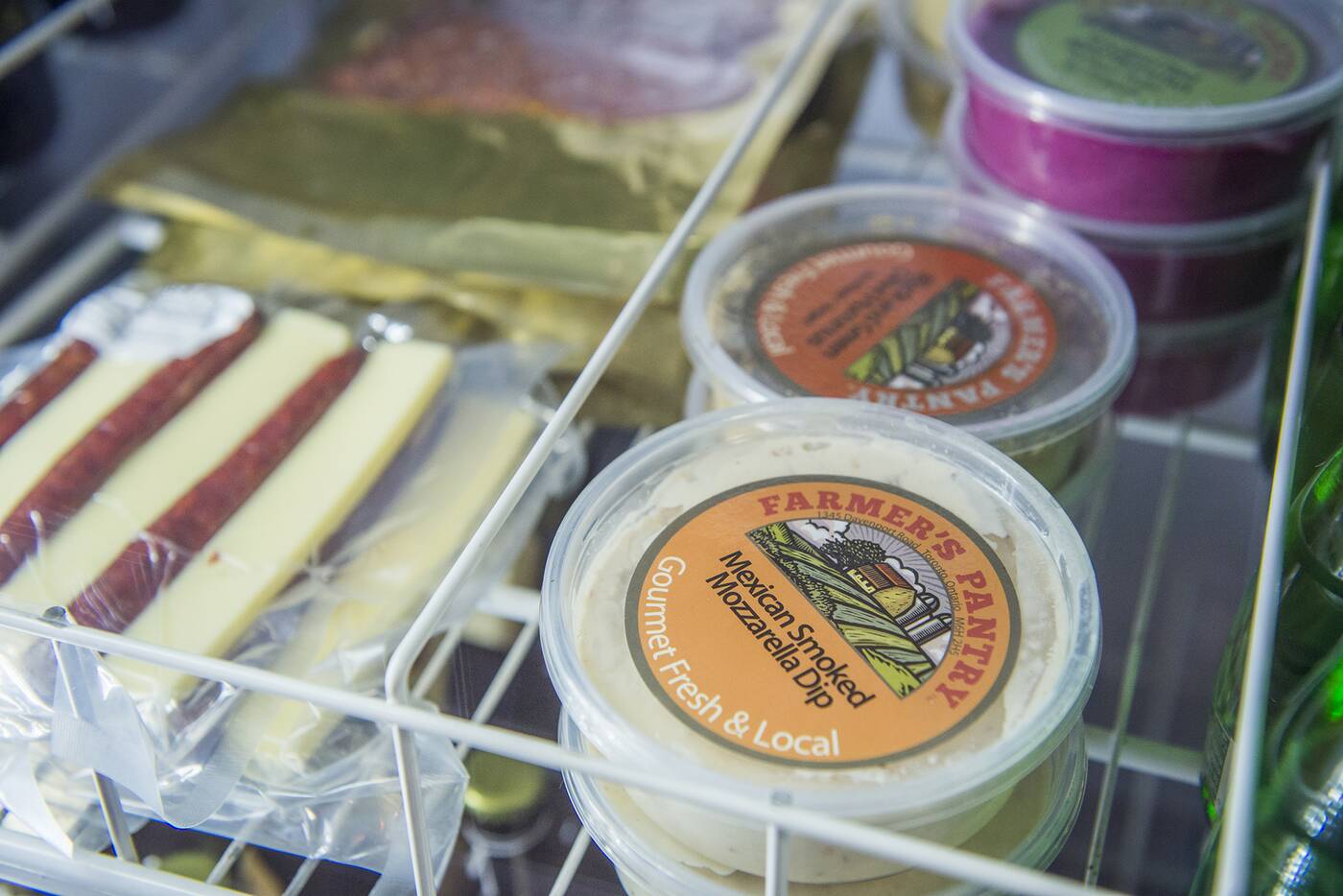 Dips like Mexican Smoked Mozzarella are available from Farmer's Pantry ($5.95) that pair with nacho chips from La Tortilleria ($3.75) not far away. They also offer "Zebra Packs" ($7) of pepperoni and cheese sticks. 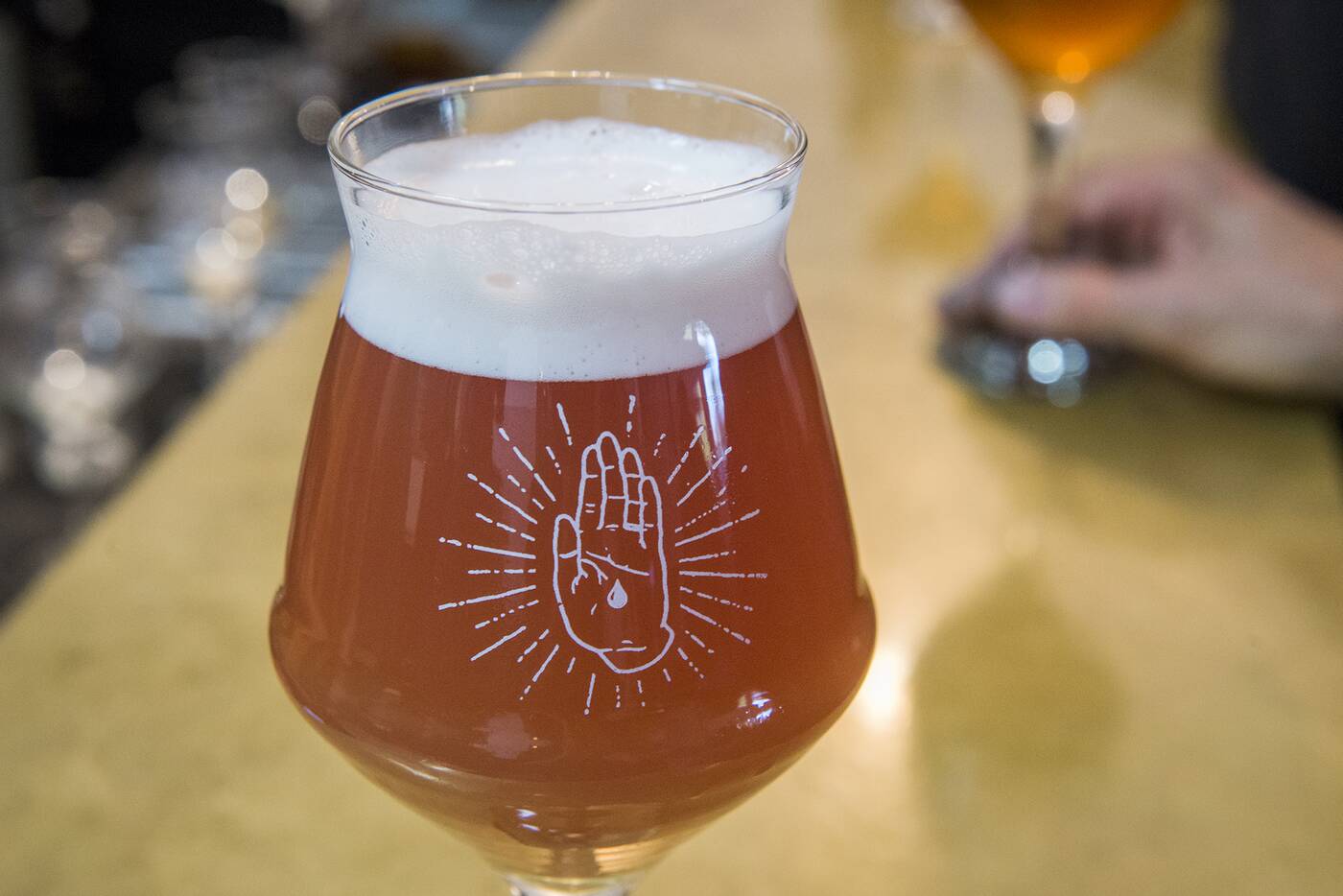 You can also skip the fridge and grab a pepperoni stick from a jar right on the counter for $1.50 to go with your flight. The Fall of Thebes ($6 for 12 ounces or $8 for a bottle) is good one to try, not a full-on sour beer but a more tart, funkier option with a higher ABV of 6.4%. 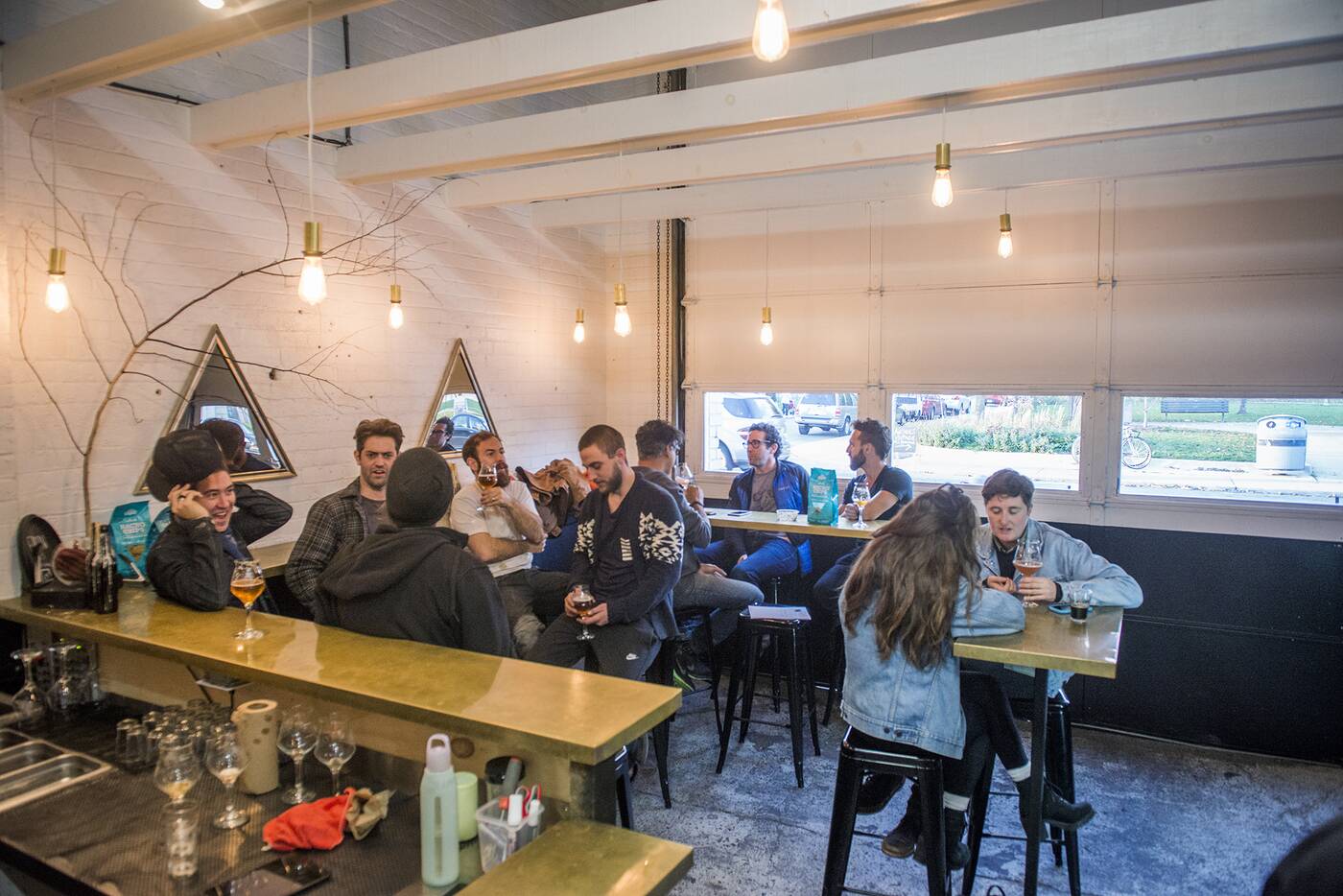 There's one little two-seater table aside from the bar and ledge seating, still utilizing high stools but perhaps a little more private and off to the side. 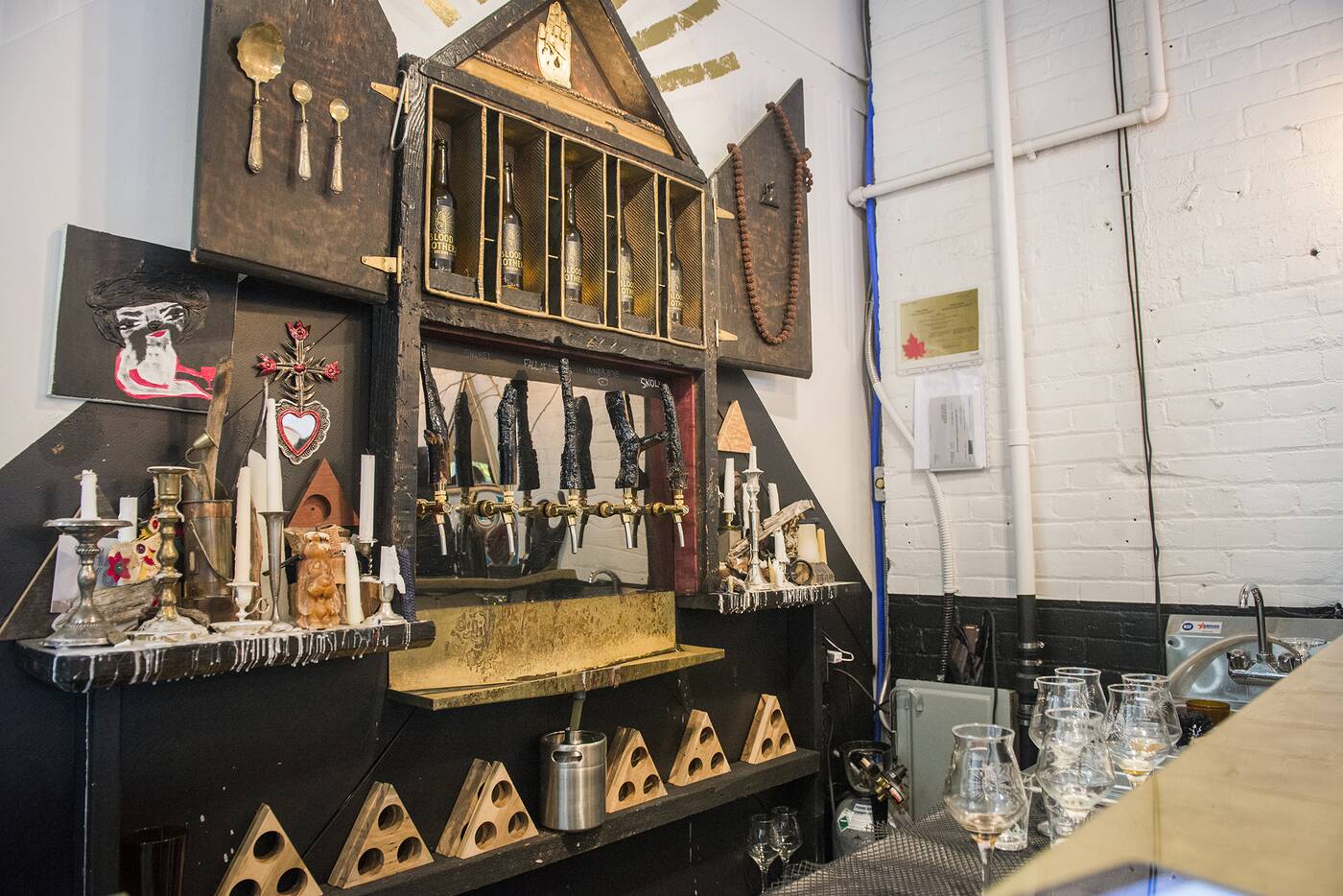 The surfaces are all a brushed metal that plays off the brewery setting, and the bar area is festooned with little occult-type knick knacks, the taps themselves mimicking branches. 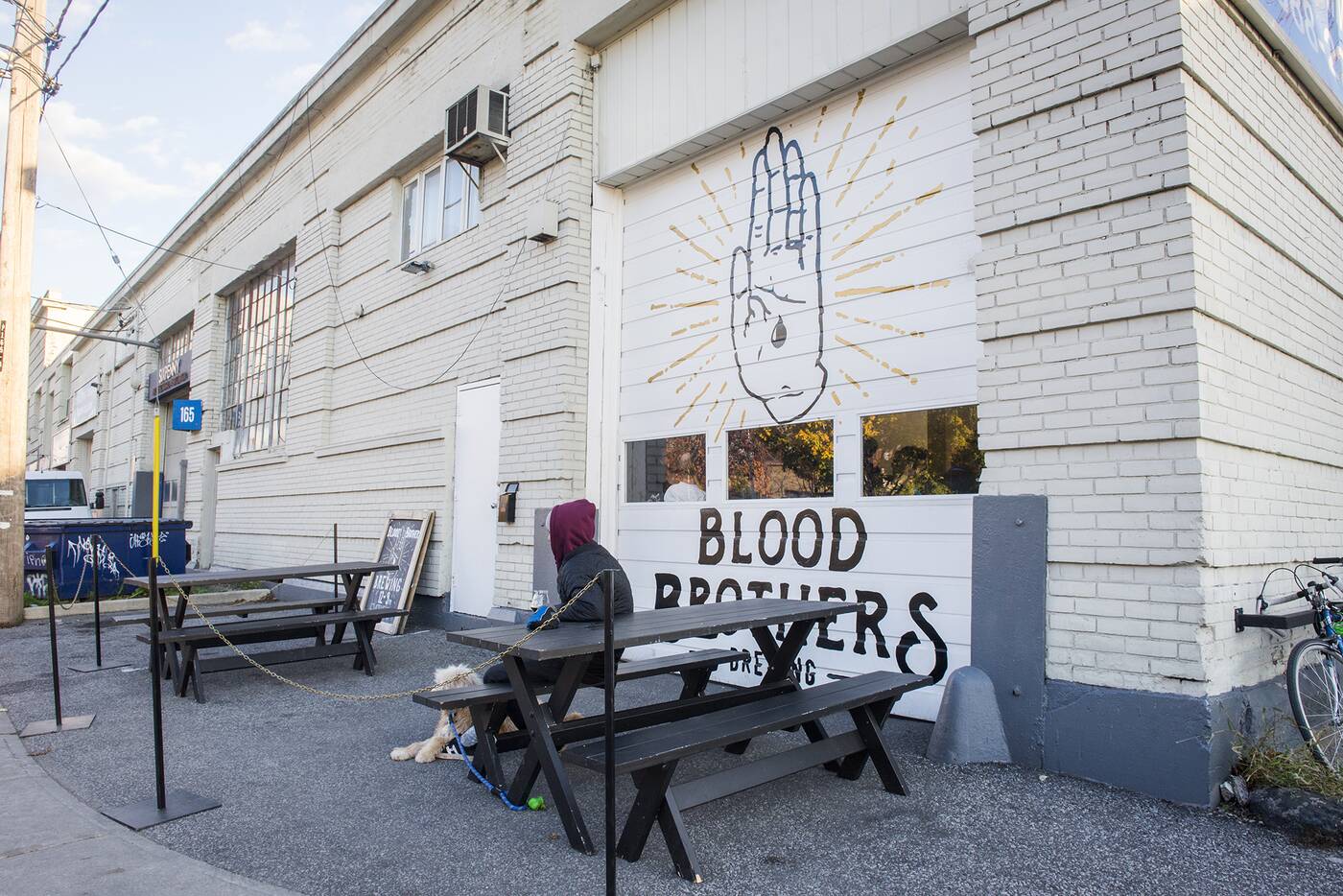