The “Project” part implies an experimental, fun-loving nature wherein a detailed cocktail menu with some limited snacks changes up seasonally. 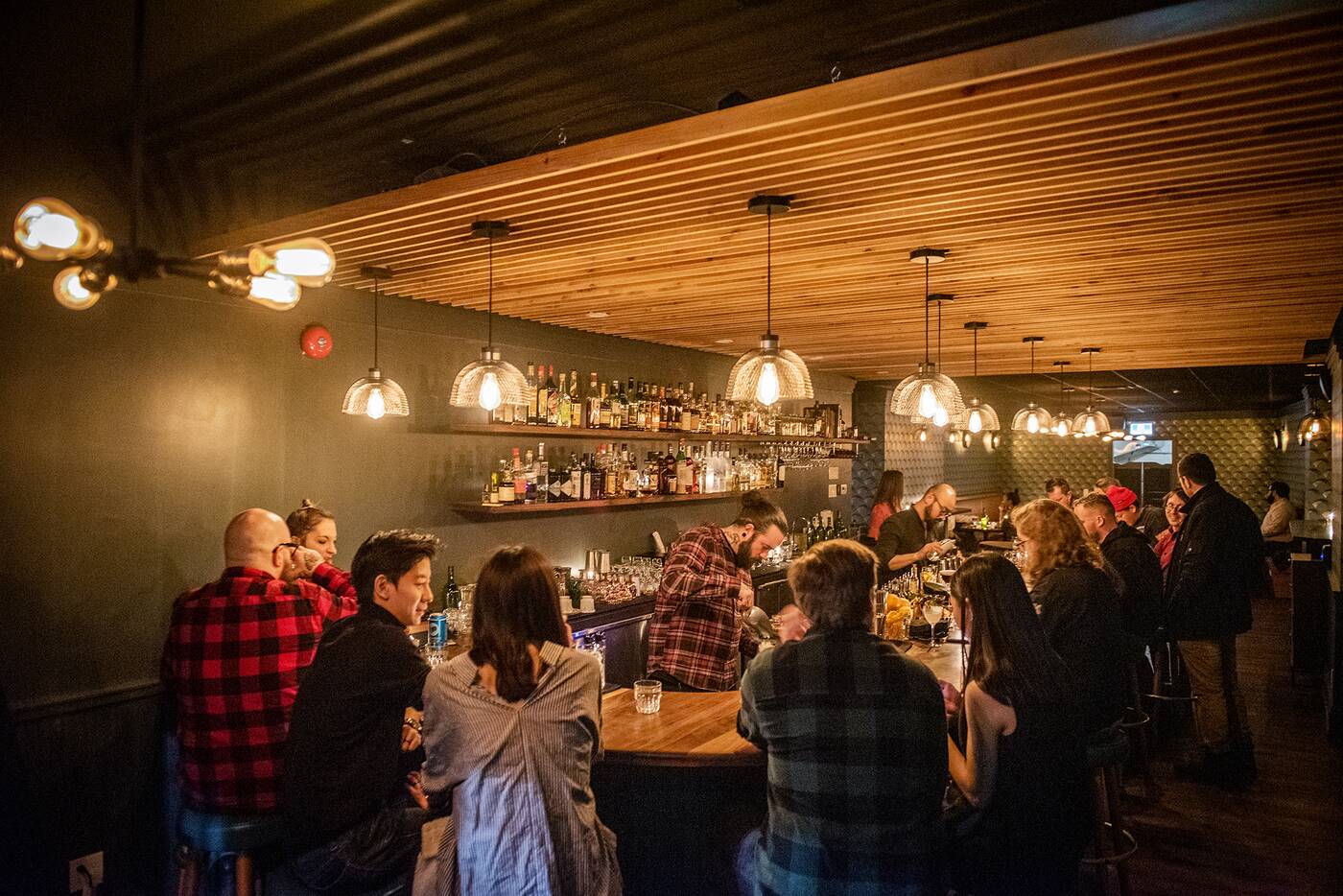 The space that used to be home to Sex Laser has gotten a sophisticated makeover influenced by three specific bars. A curved bar that allows for eye contact with anyone sitting at it is inspired by Employees Only in New York, Vancouver’s The Diamond and Keefer Bar lending ideas for the menu, colour scheme and lighting. 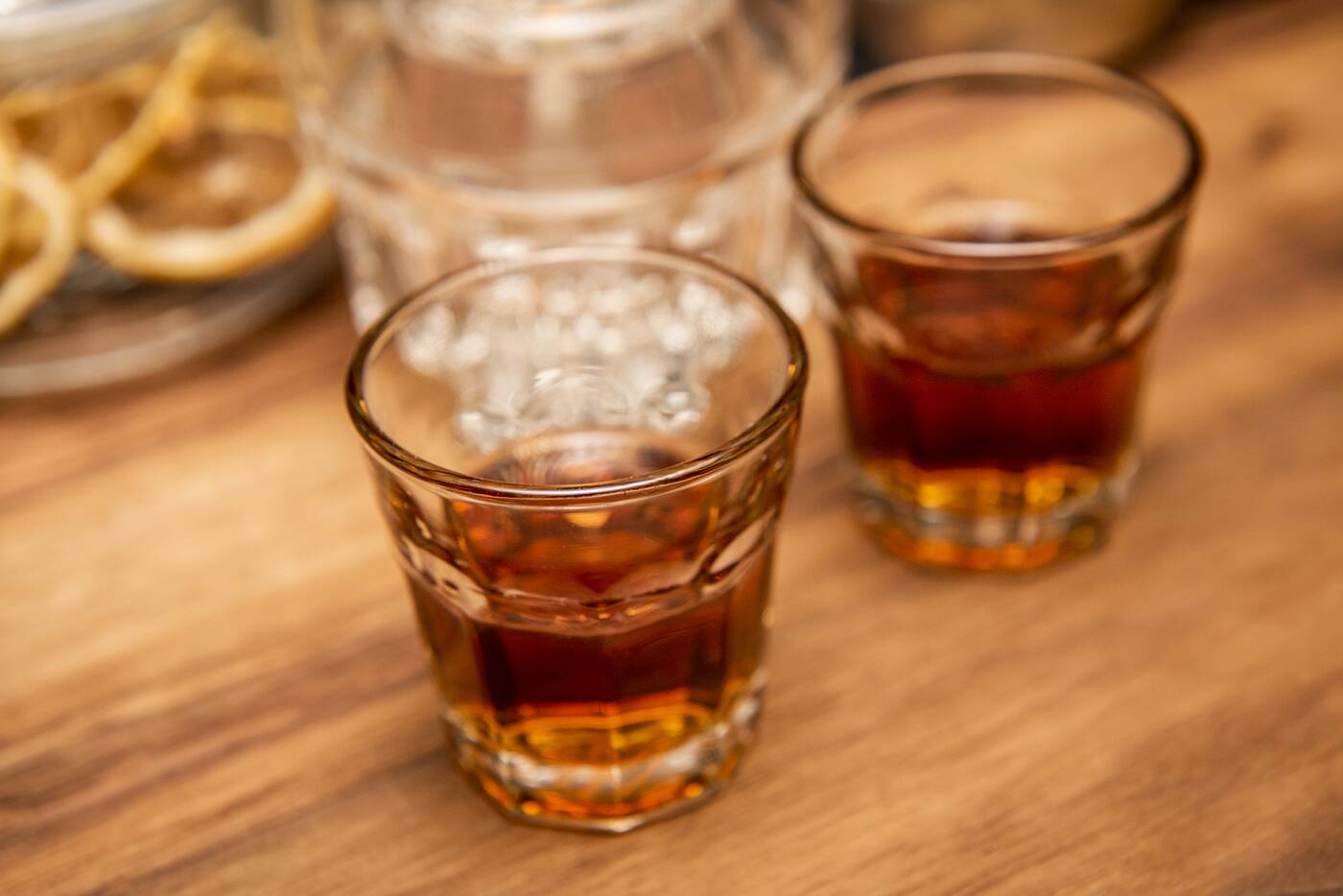 Start off with a round of unusually responsible and palatable shooters sold in orders of four, like the Peppermint Sally ($22), a combination of El Dorado 5 Rum, creme de menthe and Kahlua. With a bit of an After Eight vibe, this could suitably end a night too. 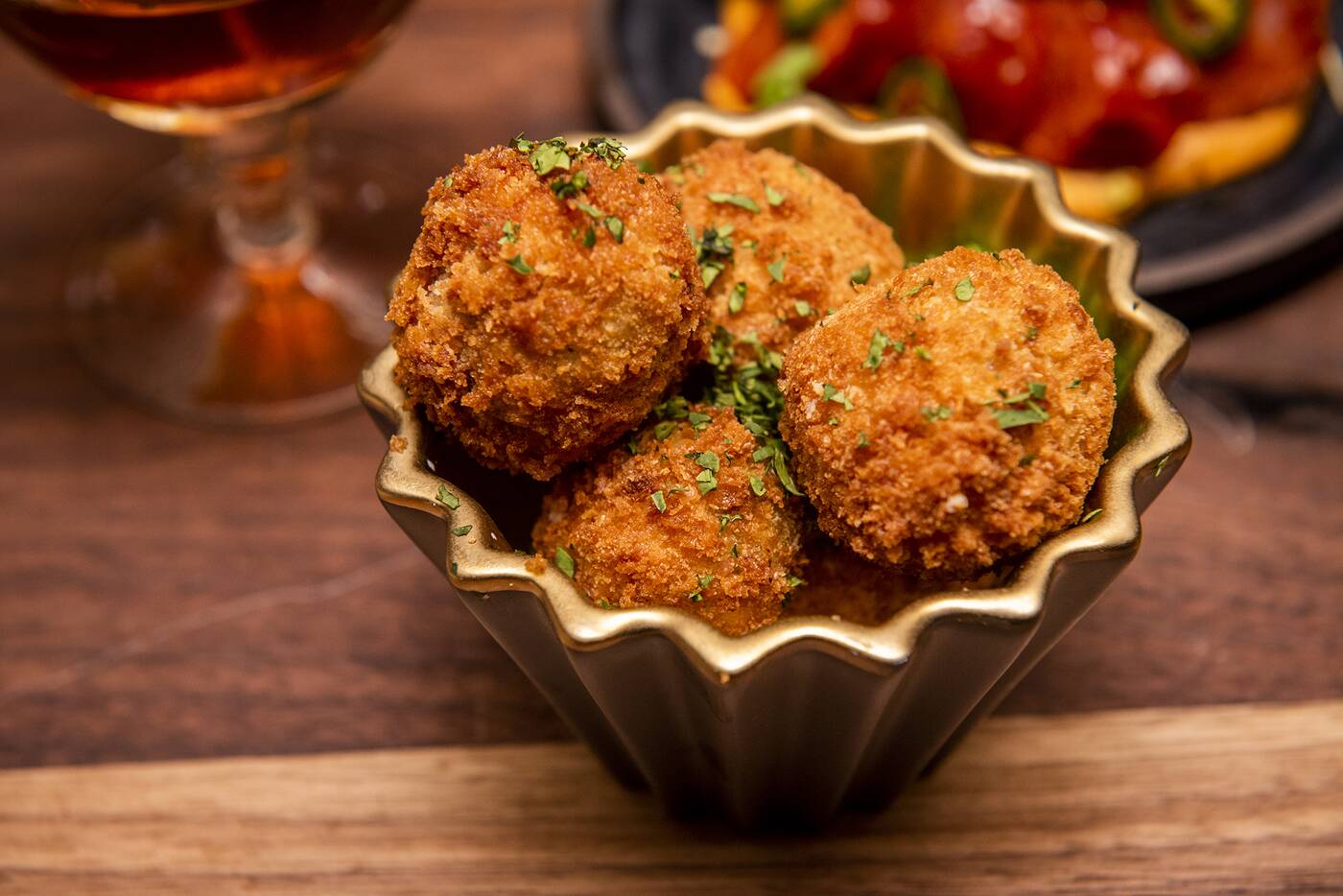 Snacks like olives all’ ascolana ($8) feel like traditional fried finger food with a bit of an upscale twist. A bit hard to split in an order of five, but overall they’re delightful little panko-crusted balls of olive, cripsy ham, and gooey manchego, marble and cream cheese. 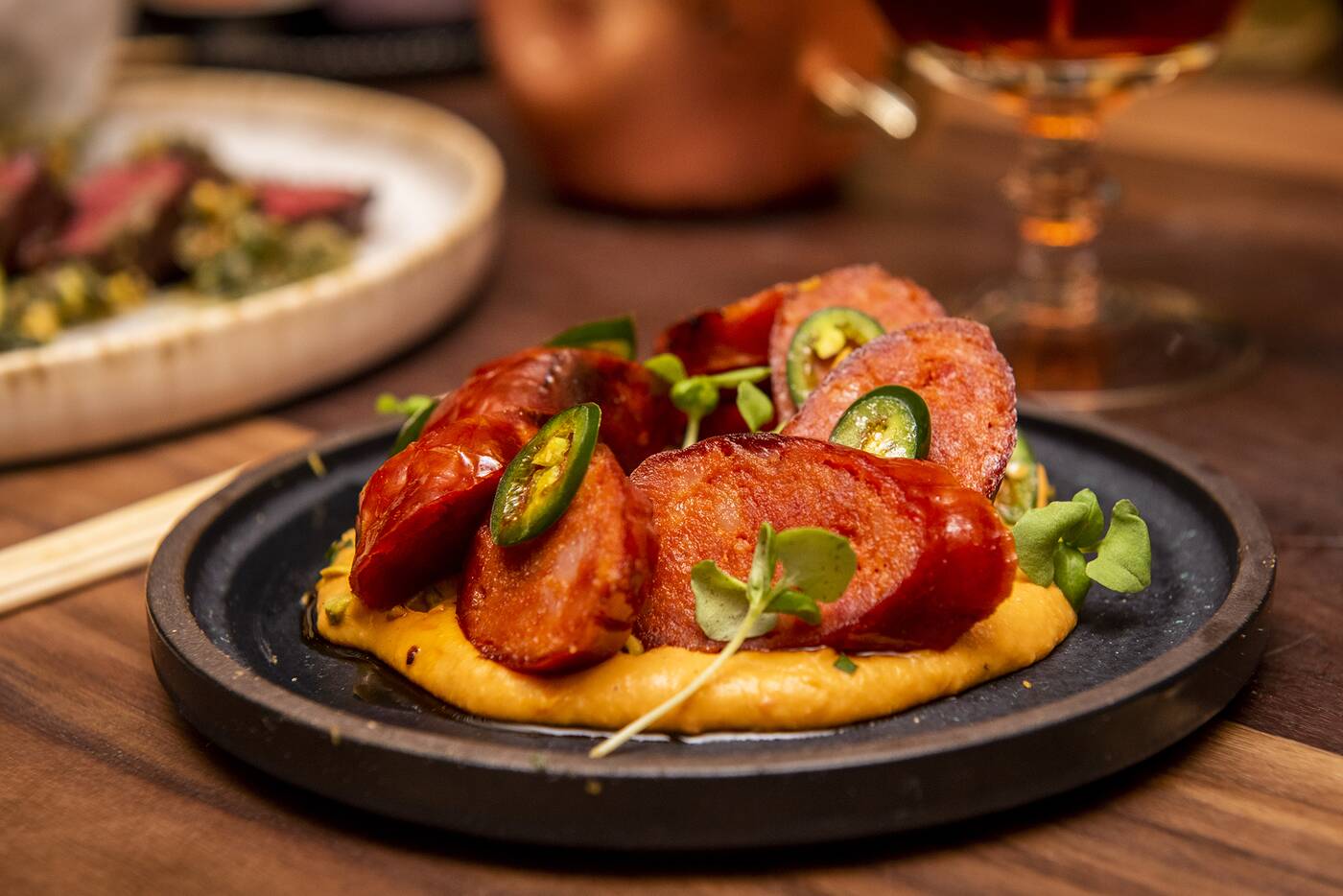 Grilled chorizo ($9) can be dragged through a bed of red pepper hummus with toothpicks, pistachio and serrano lending crunch and spice to the surprisingly hearty small plate. 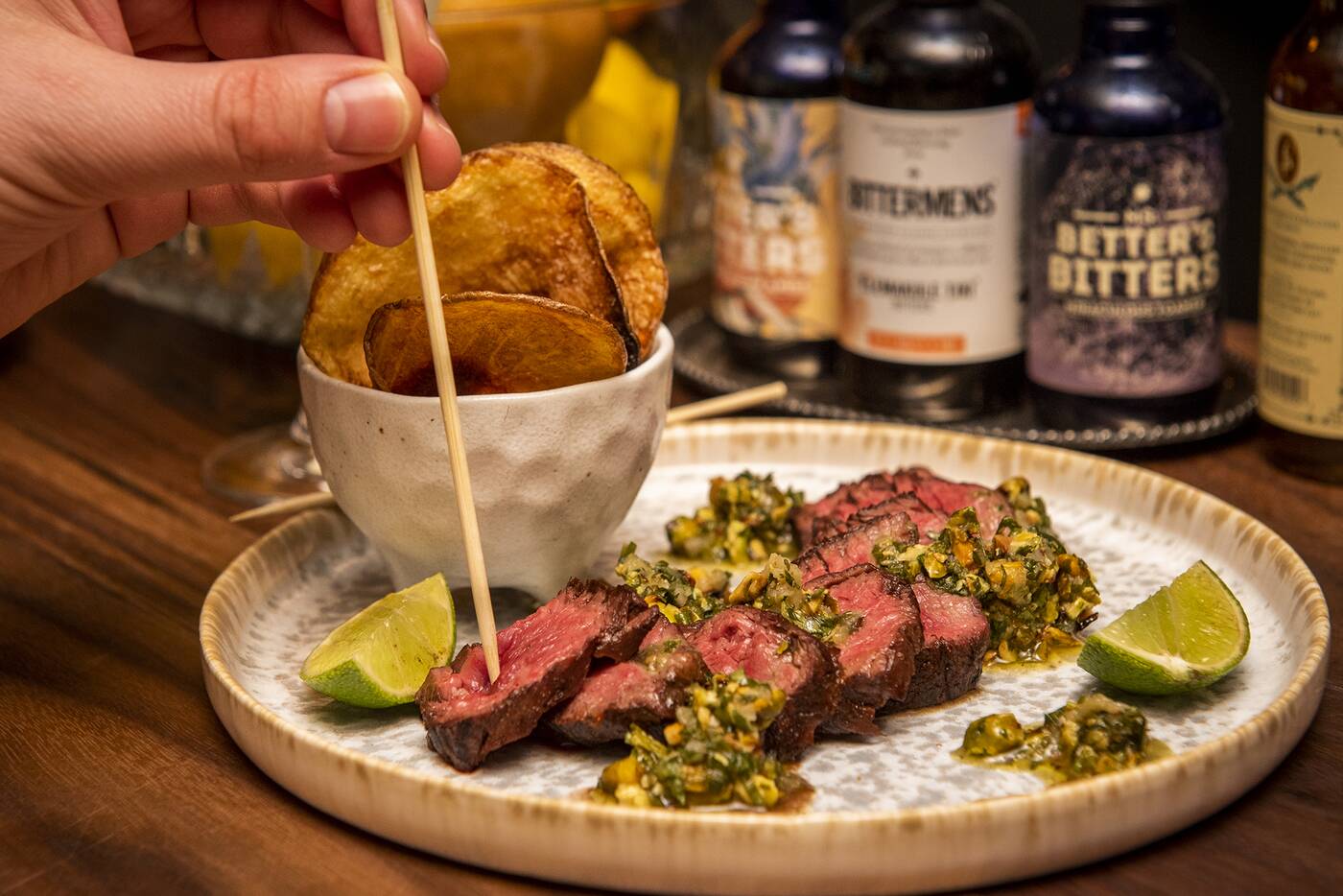 A miniature six-ounce hanger steak ($18) can also be eaten with toothpicks, surprisingly easily, actually. Nicely cooked to a melty texture and served with a lively chimichurri and lime, it could even stand well on its own without the side of curried potato crisps. 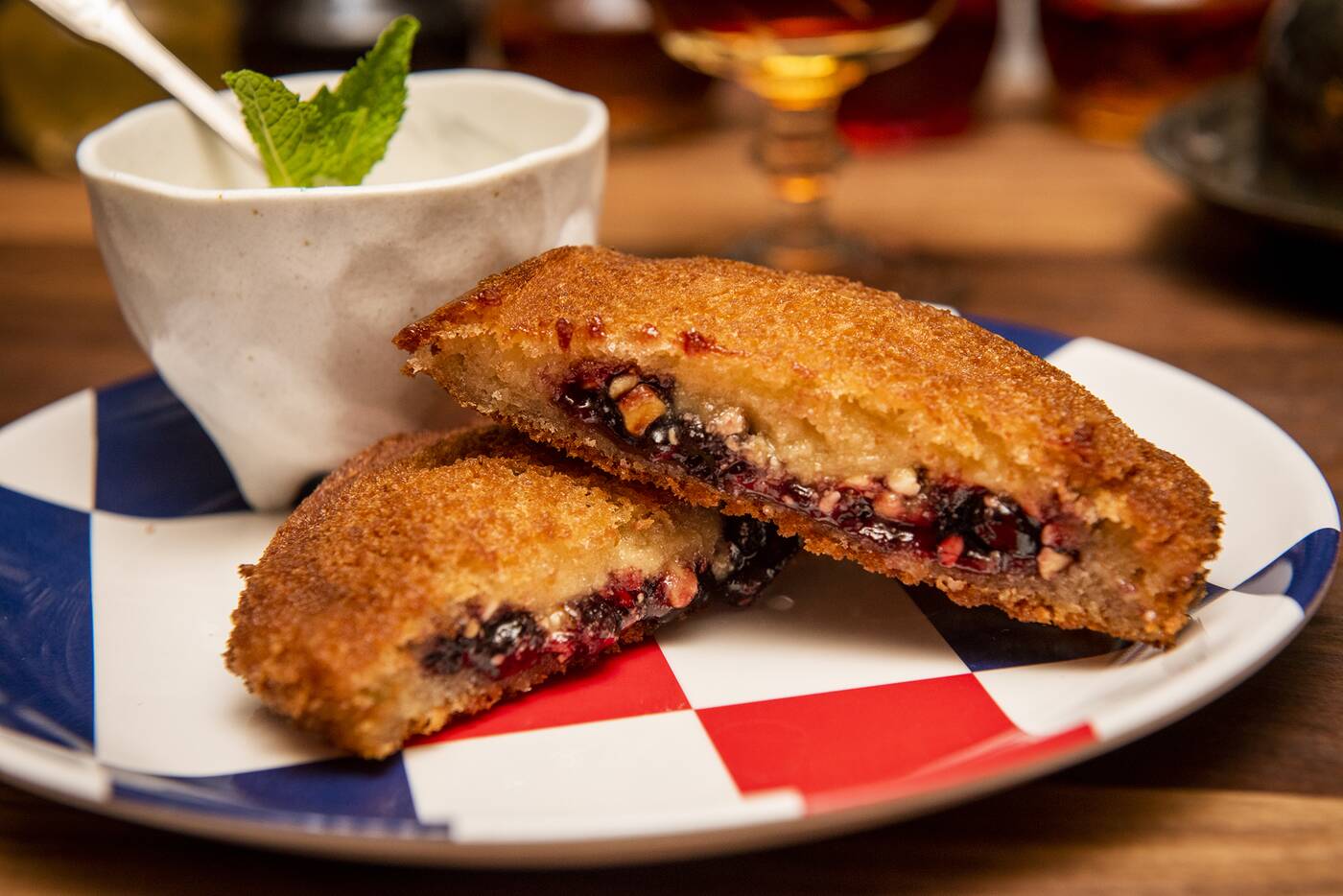 A fried CB&J ($9) provides a kind of dessert option served with vanilla ice cream, a deep-fried sandwich of cashew butter and mixed berry jelly. A little oily overall, but the butter is a great texture, and you have to dip this into the ice cream for the full effect. 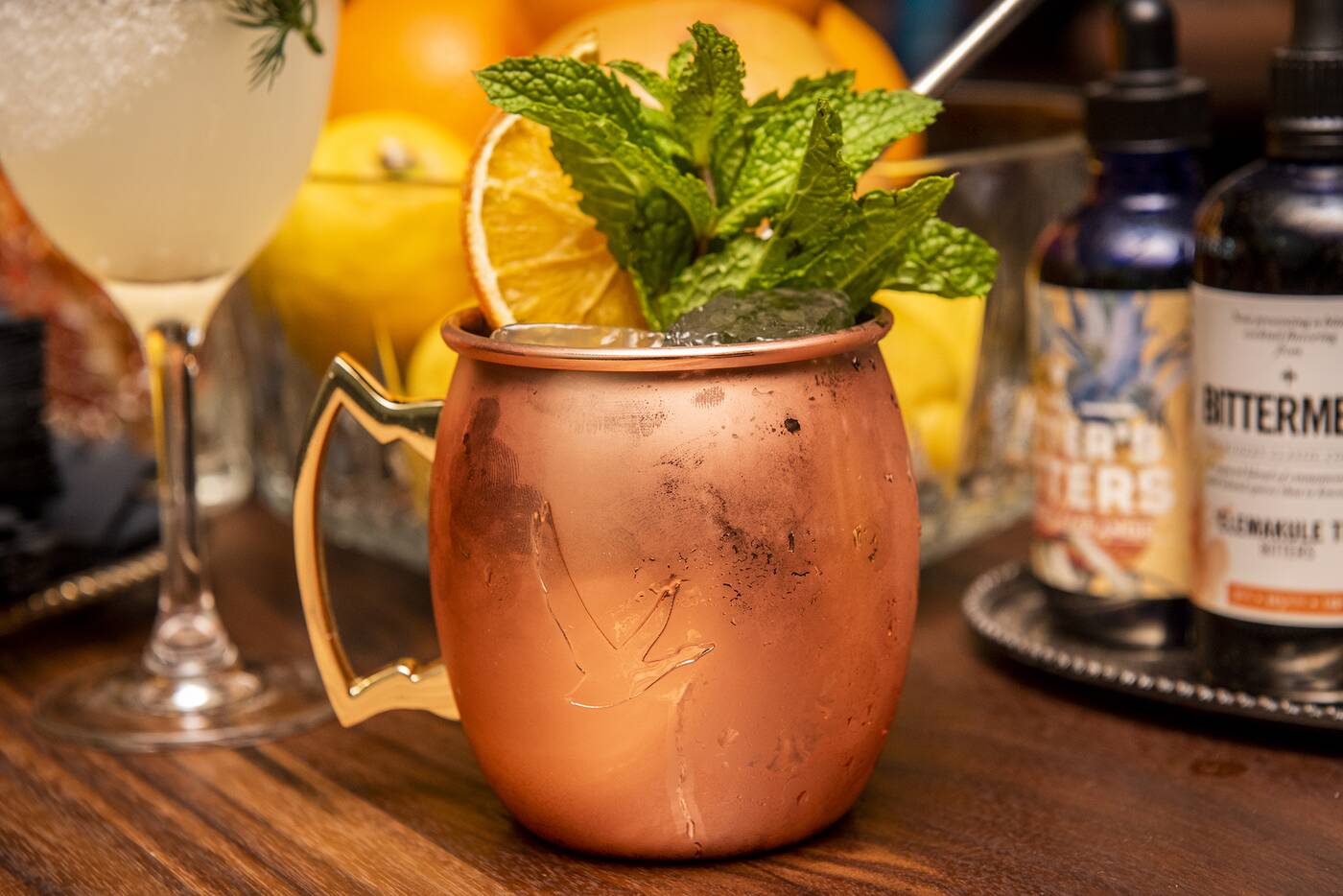 It pairs well with an Uncle Terry’s Mule ($15), itself inspired by a sweet treat: Terry’s Chocolate Orange. It legitimately tastes like just like one but better and with alcohol, the illusion created using L’Orange Grey Goose, chocolate liqueur, Cointreau, lemon and ginger beer. 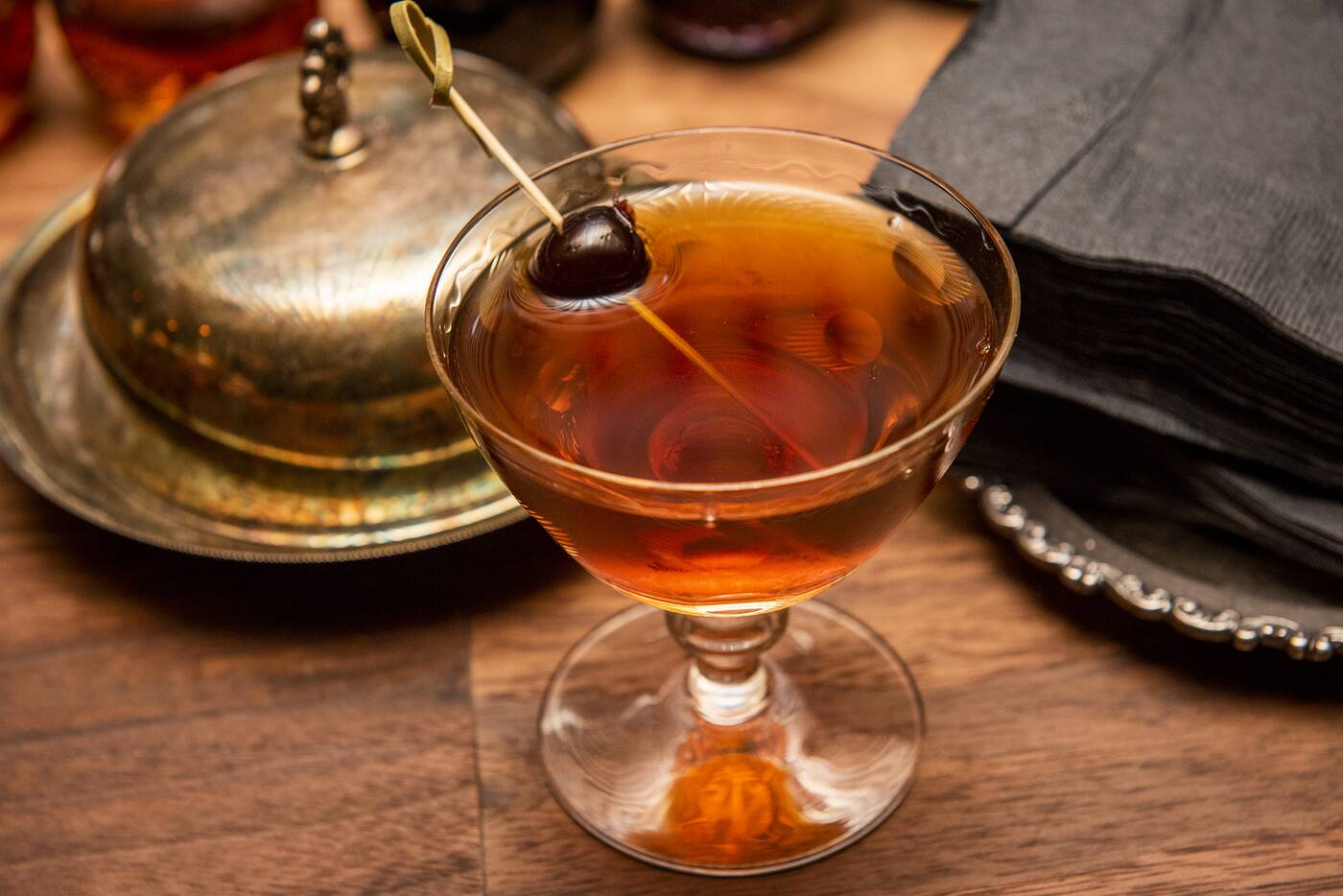 The Meat Hook ($16) from the “around the globe” section of the cocktail menu is firmly on the other end of the spectrum, a beefy, boozy combination of Rittenhouse rye, Punt e Mes vermouth, maraschino and Ardberg 10 inspired by an iconic Vancouver cocktail. 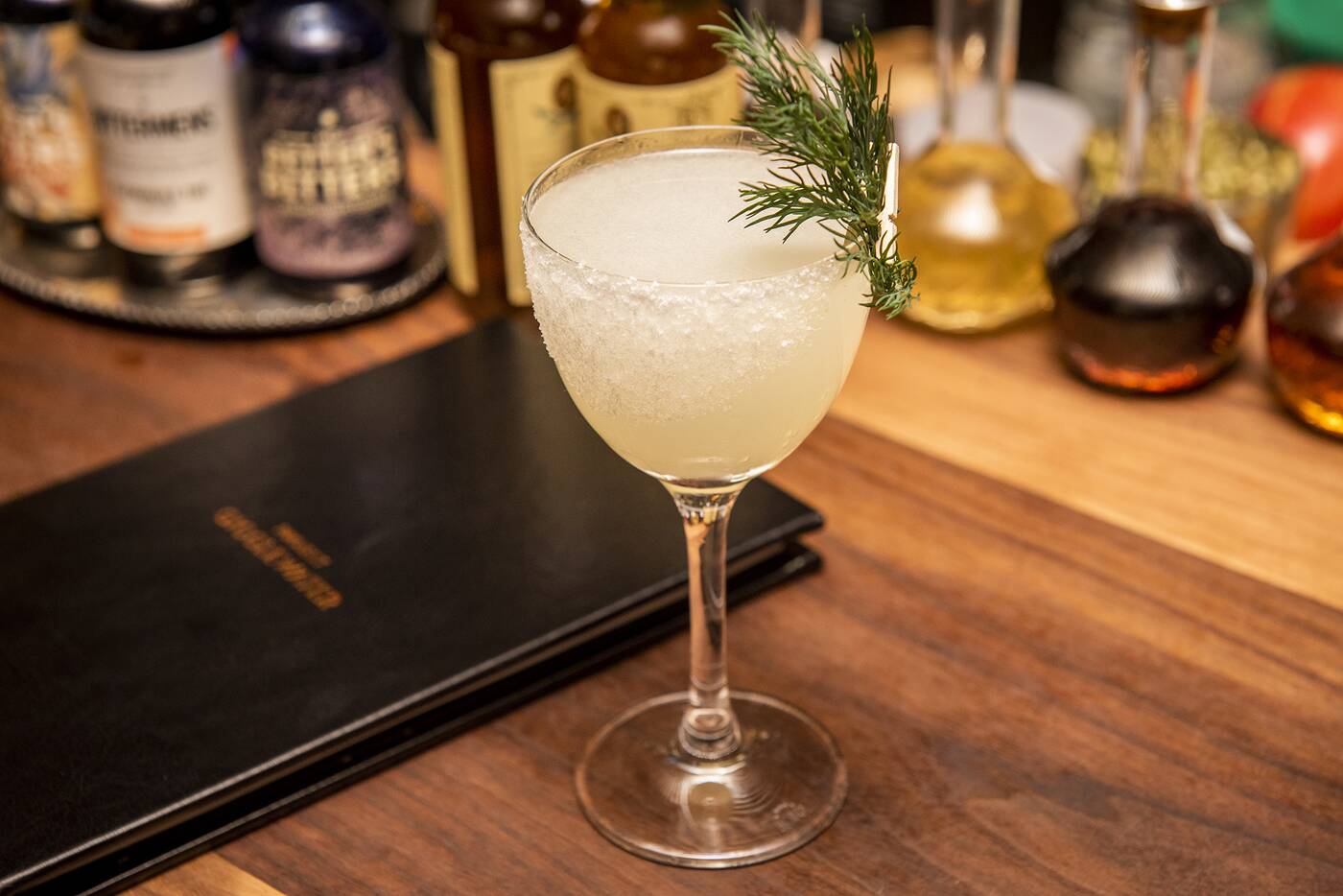 Kommen & Dild ($14, “delicate”) literally translates to caraway and dill, kind of like a Danish margarita with akvavit, pear liqueur, lime, sugar and salt. 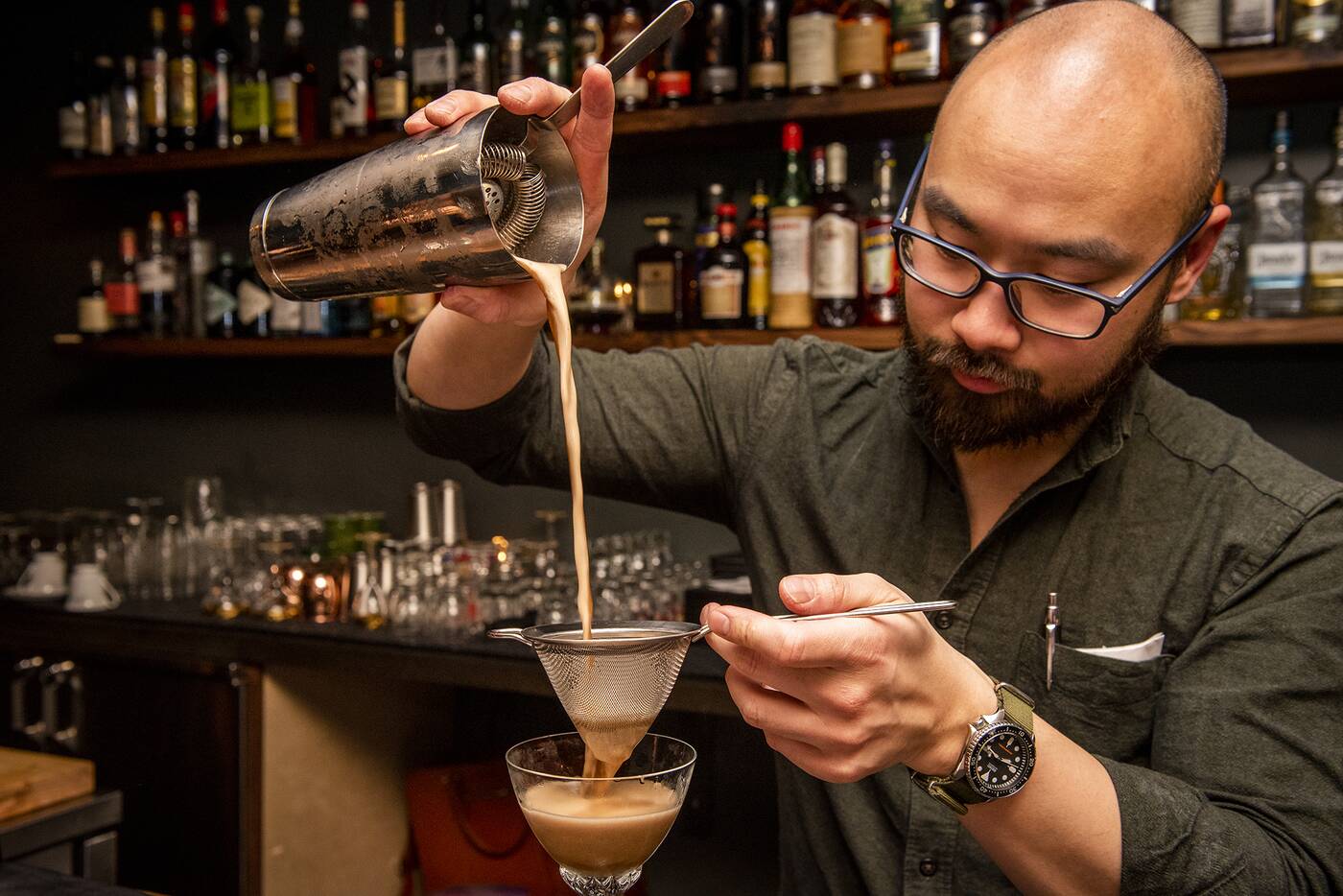 Things are always changing here from cocktails to food; in the words of owner Alfred Siu, “It’s a project, after all.” 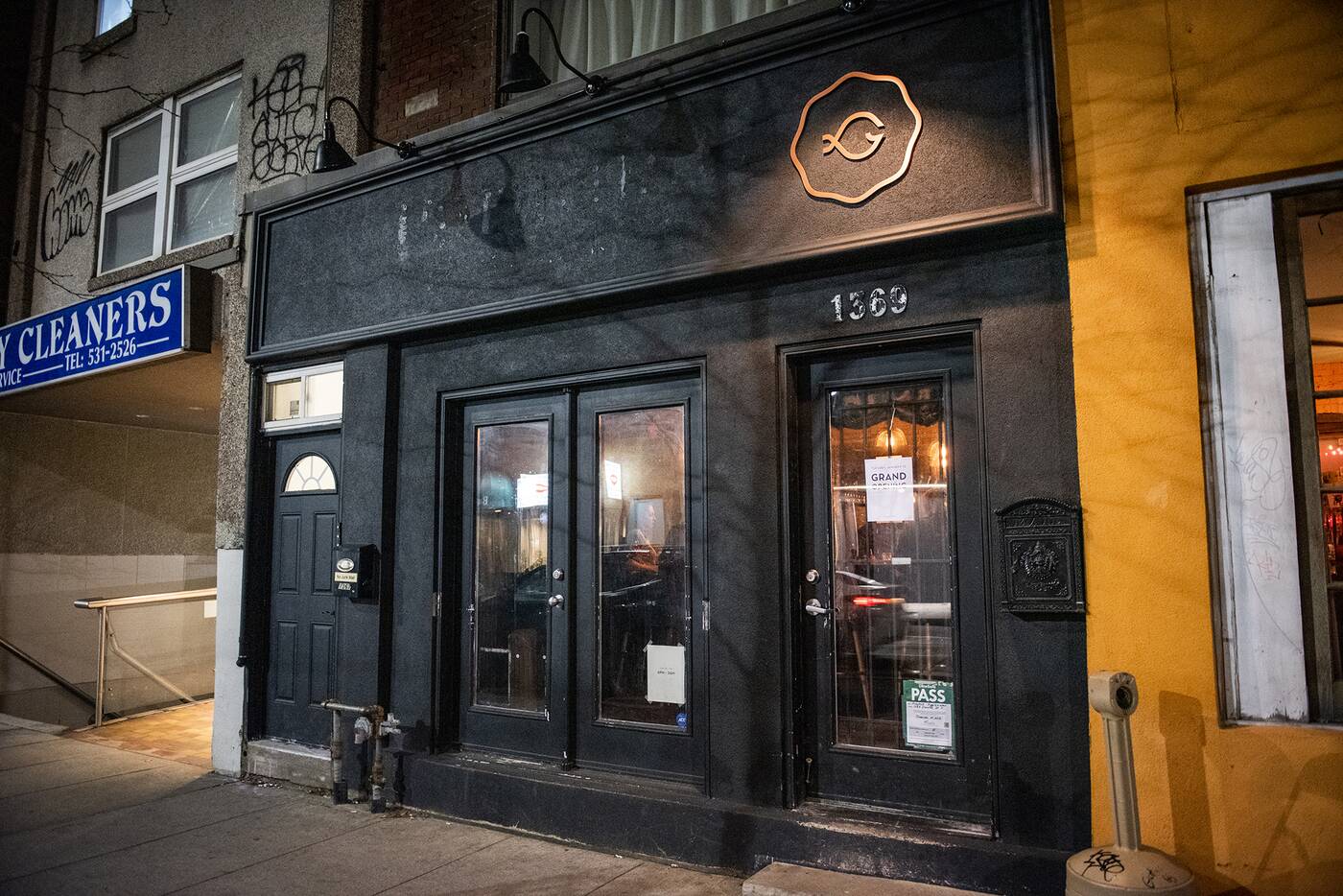