The Lockhart nearly blew up the internet. Ever since word broke that there's a Harry Potter -themed bar in Toronto, this small spot on Dundas West that used to be Lucy Brock has been receiving tons of attention all over the globe, from Time and Condé Nast Traveler to The Guardian .

You've probably heard all about it by now: the bar sharing a name with a Defense Against the Dark Arts professor, the lit-up neon "all was well" sign, the Patronus stag's head, the Pop! dolls of Hagrid, Ron, Hermione and co. as decor, the hidden Deathly Hallows symbol (it may be on a light fixture), the fact that the owners identify as Hufflepuff. 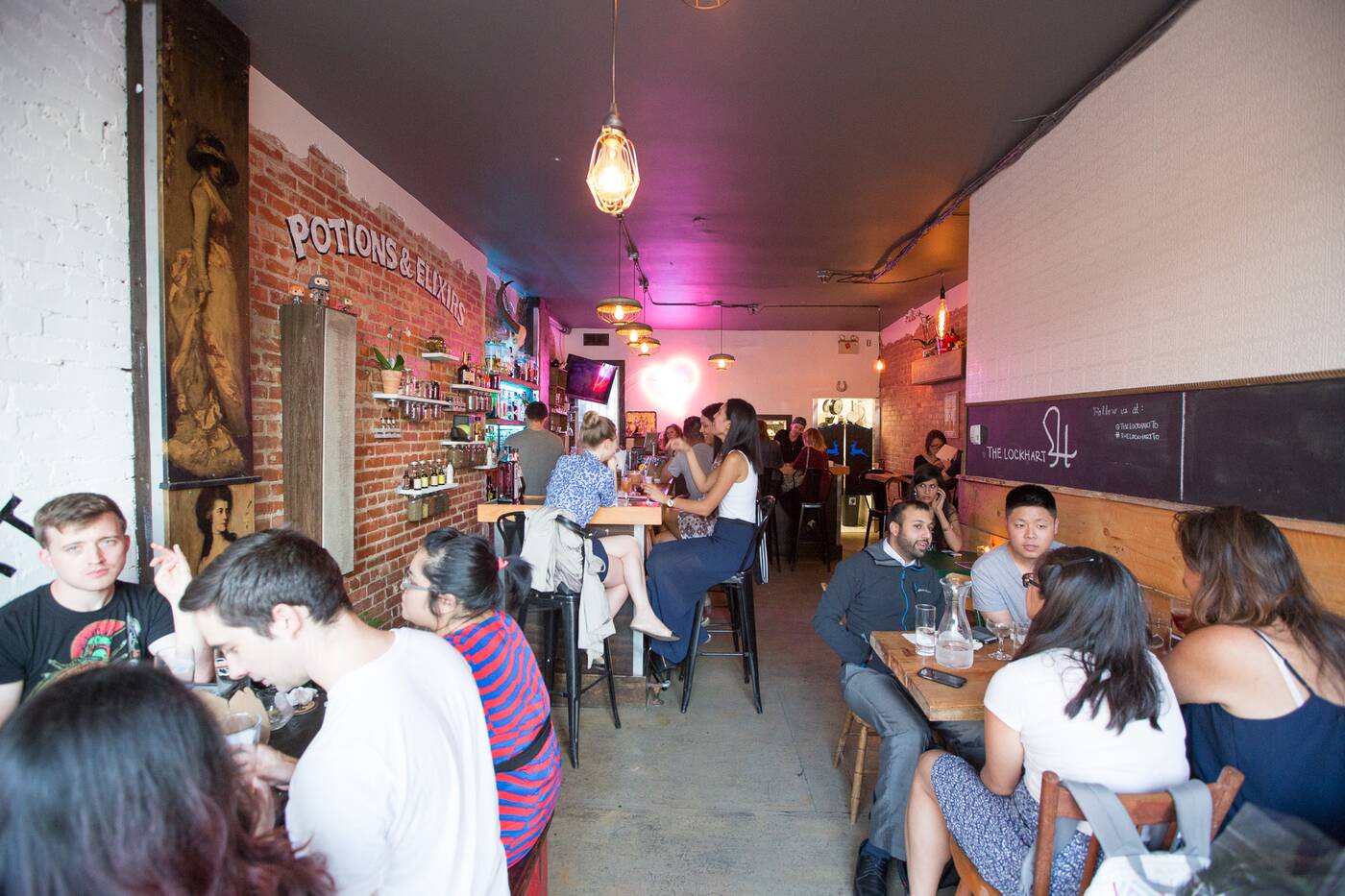 When my friend and I enter the place, the first thing co-owner Paris Xerx (also known as Pouria Fakhraei) wants to emphasize is that it's not a Harry Potter theme bar - at the very most.

It's inspired by the series, but he and co-owner Matt Rocks are just fans: "We don't want to step on J.K. Rowling's toes." (Or get sued.)

Xerx, who moved here from Iran when he was 11, and Rocks, who was born in Bermuda and ended up in this city after stints in Dublin and London (England, of course), used to co-own Delecq Cafe and Wine Bar in the Beaches with another partner, but sold their shares to open up what was originally intended to be a local neighbourhood bar for the community.

While the press may have blown the Harry Potter -ness of the place out of proportion - it really is quite subtle unless you're an HP fanatic and/or you know what to look for - the guys can't complain about the attention the bar's received.

Visitors from Scotland and Texas are excitedly waiting outside before the bar opens, and others have road tripped from New York. 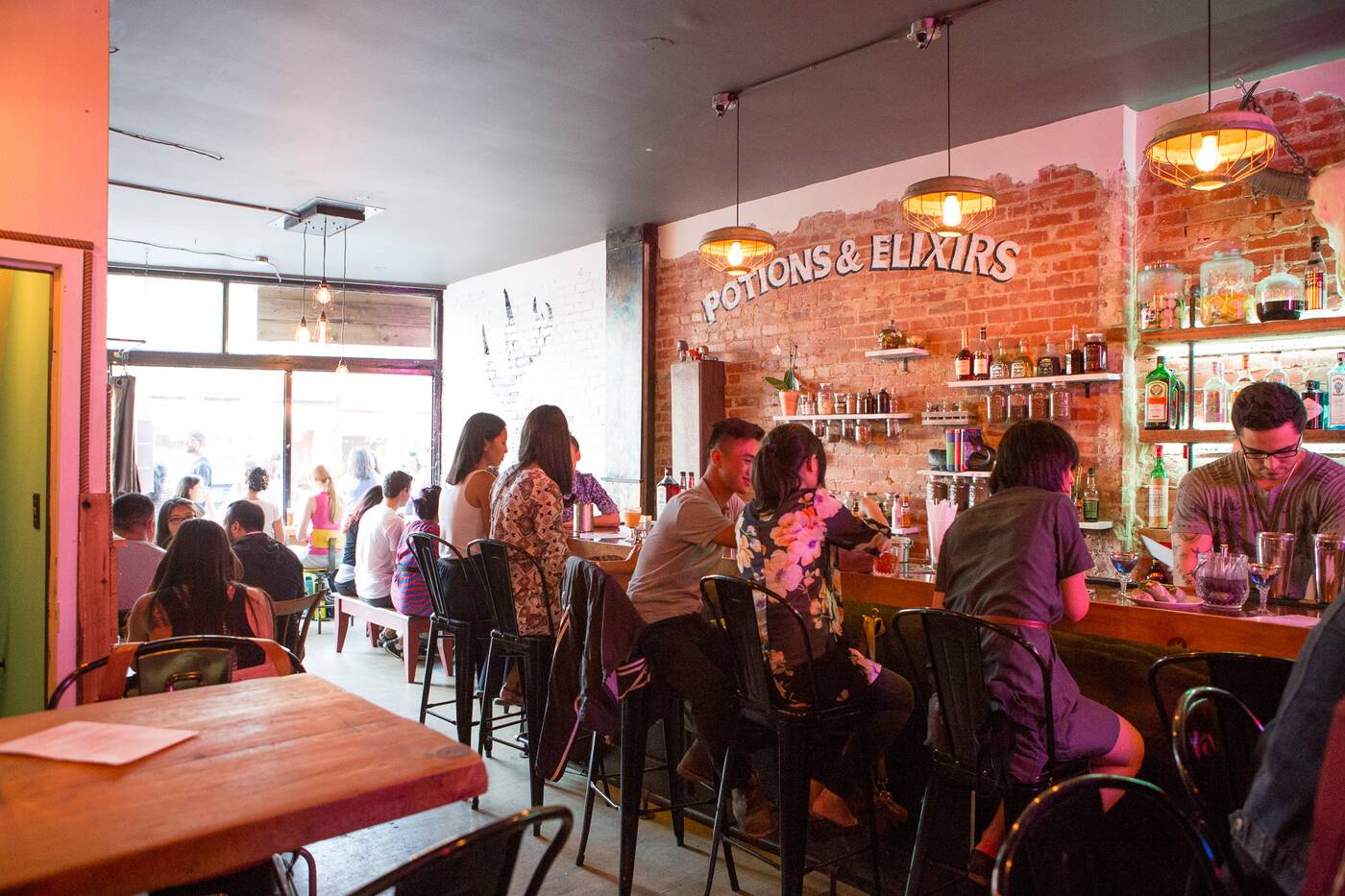 My friend and I perch ourselves at the penny-covered bar (a holdover from its Lucy Brock days) for front row seats to the cocktail-making action. 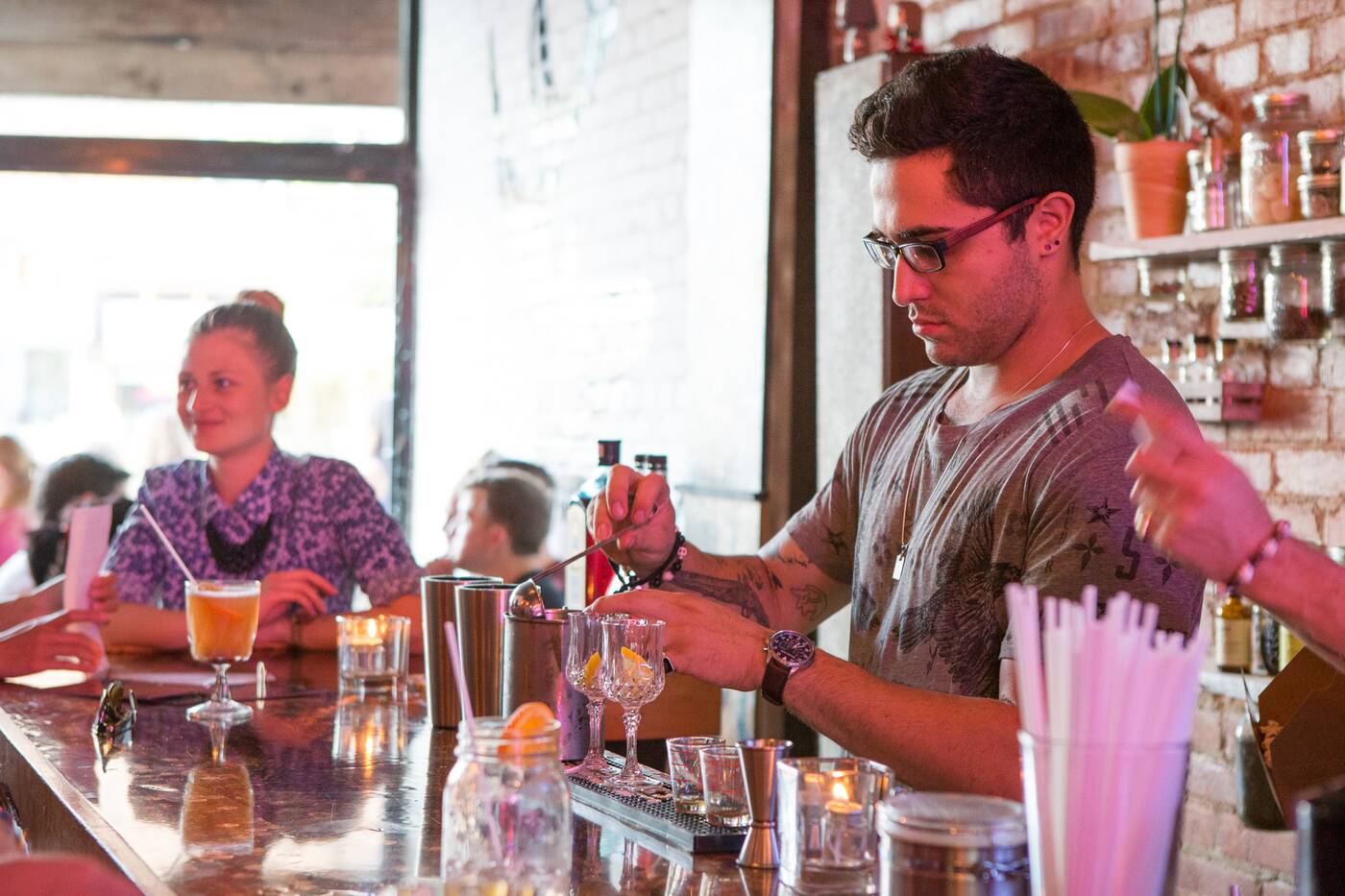 While there are also craft beers (Wellington, Beau's, Mill Street, Muskoka) available on tap ($7) - a riff on Butterbeer is on its way - and a few bottles ($6), the house-made "potions & elixirs" are the highlight here. 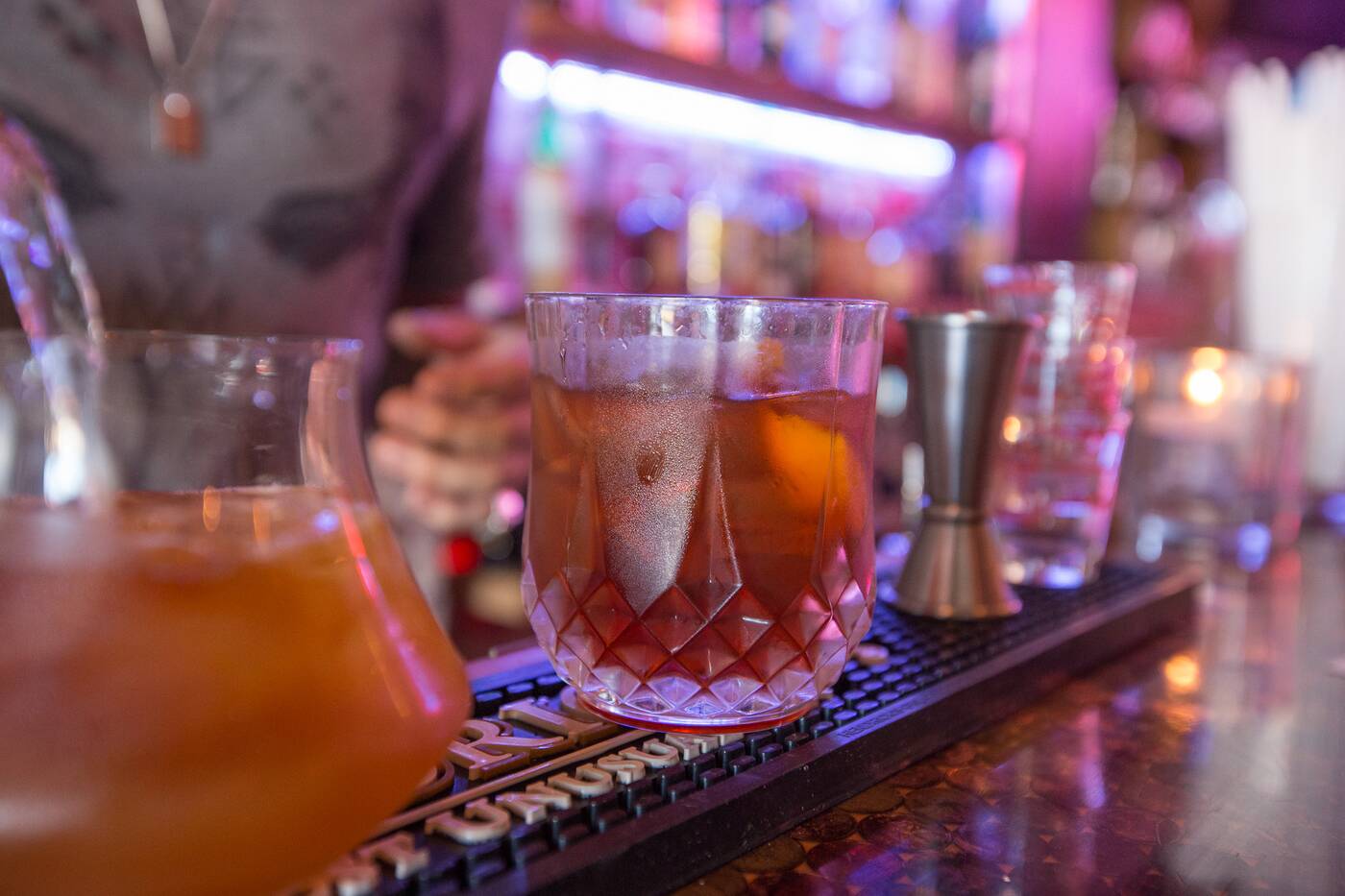 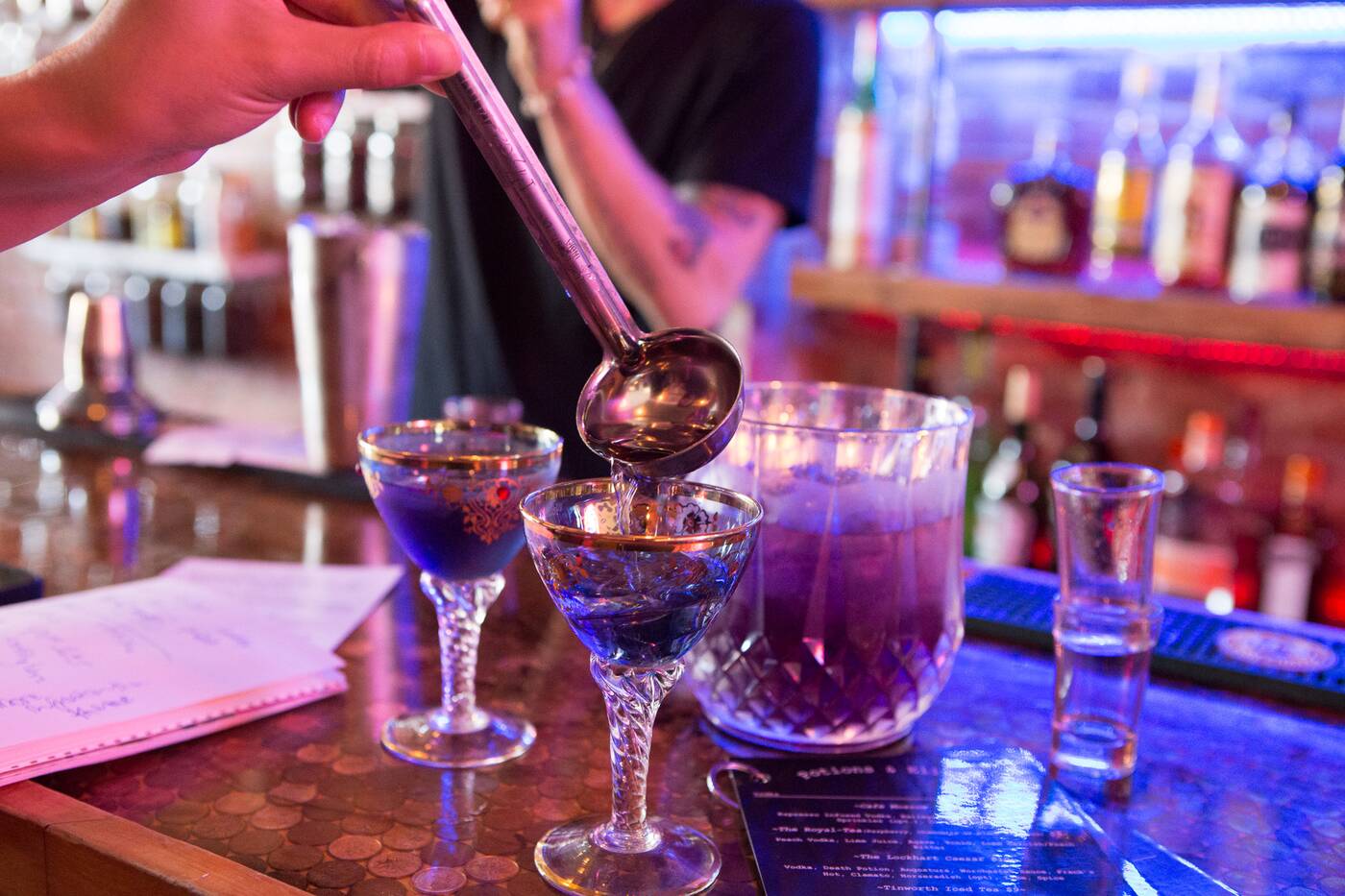 Xerx, a self-taught mixology enthusiast, came up with these concoctions himself (his inspiration is Manhattan's Death & Co. ), and all the infusions are made in-house - it almost looks like an apothecary in here. 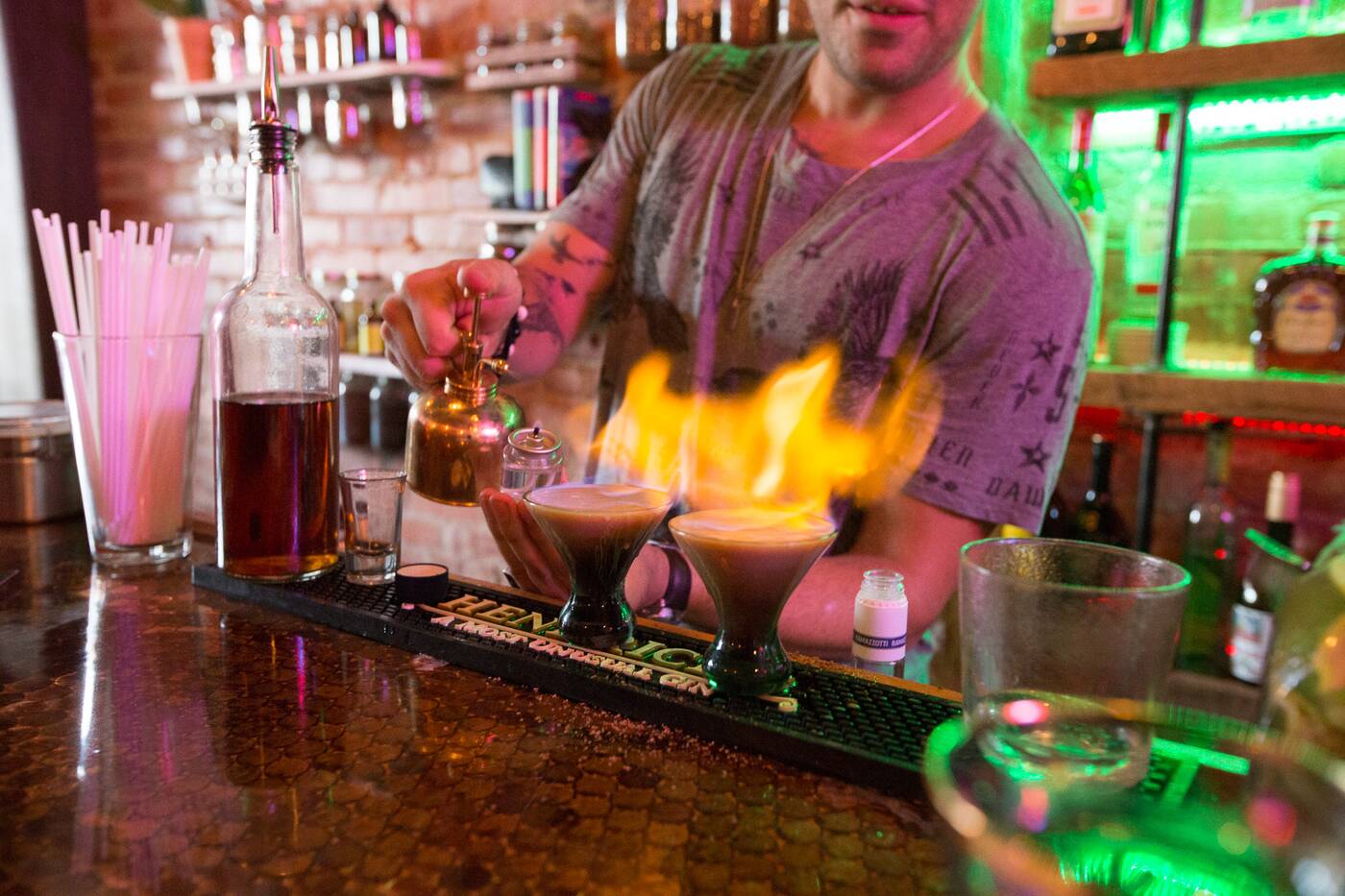 Cocktails are reasonably priced, ranging from $7 to $10 each, served in thrifted glassware so that they each have their own unique character.

There are also Jalapeno Death Shots ($5 each), which come with a warning that they're "not recommended for human consumption."

Housed in skull-shaped vessels, the jalapeno-infused tequila gets spicier the longer the chili seeds steep in the liquid. Rocks tells me he can't handle more than Sriracha and thinks those downing these shots must be masochists. 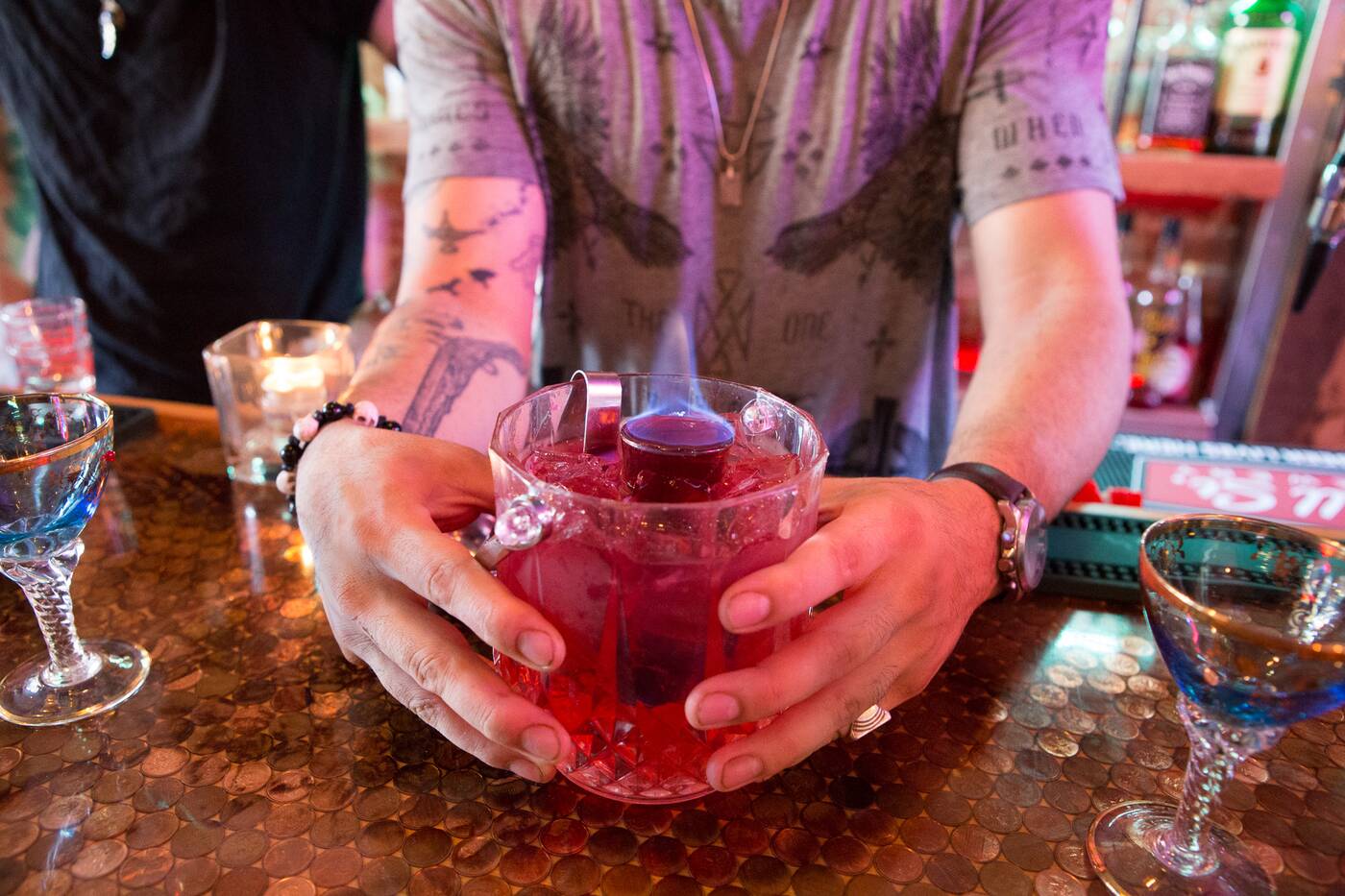 We decide to go for some drama and order a shared cocktail - the Befuddlement Draft ($28).

We're supposed to blow out the fire, pour the shots in, stir the whole thing and ladle the liquid into the two gold-rimmed glass goblets it's served with.

It's fun to watch the sweet mixture change colours from red to purple to cobalt as the blue curacao blends with the cherry brandy and takes over - heck, it's almost magical. 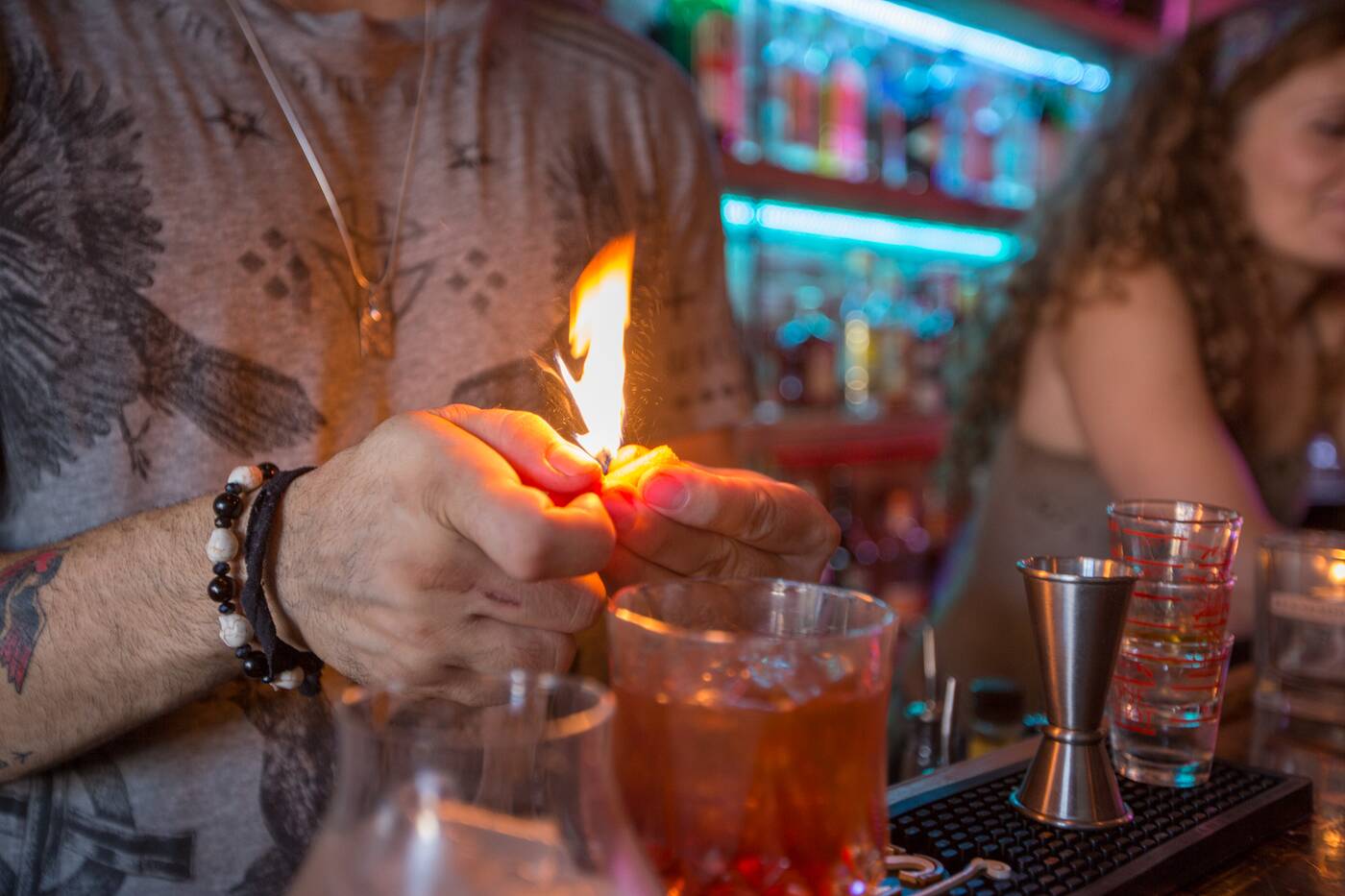 Everyone behind the bar works quickly to make and serve drinks, mindful of those waiting in line outside. The joint only seats about 30, so they need to keep things moving.

Capacity should increase when the back patio opens (they're aiming for next summer). There are also plans to host trivia, BBQ and movie nights in the future.

As for food, there is currently a short tapas menu of items (no sci-fi/fantasy names here) that includes gourmet popcorn ($4) with flavours that are supposed to change up daily (lately they've been so slammed they haven't really had time to).

They hope to expand their food menu and introduce brunch, but want to make sure things are up to snuff before they do.

Unfortunately, the kitchen is in the weeds during our visit. I'm disappointed to hear the one thing they're not making that day is the deep-fried jalapeno mac & cheese sliders ($12), as that's the one thing I wanted to try. 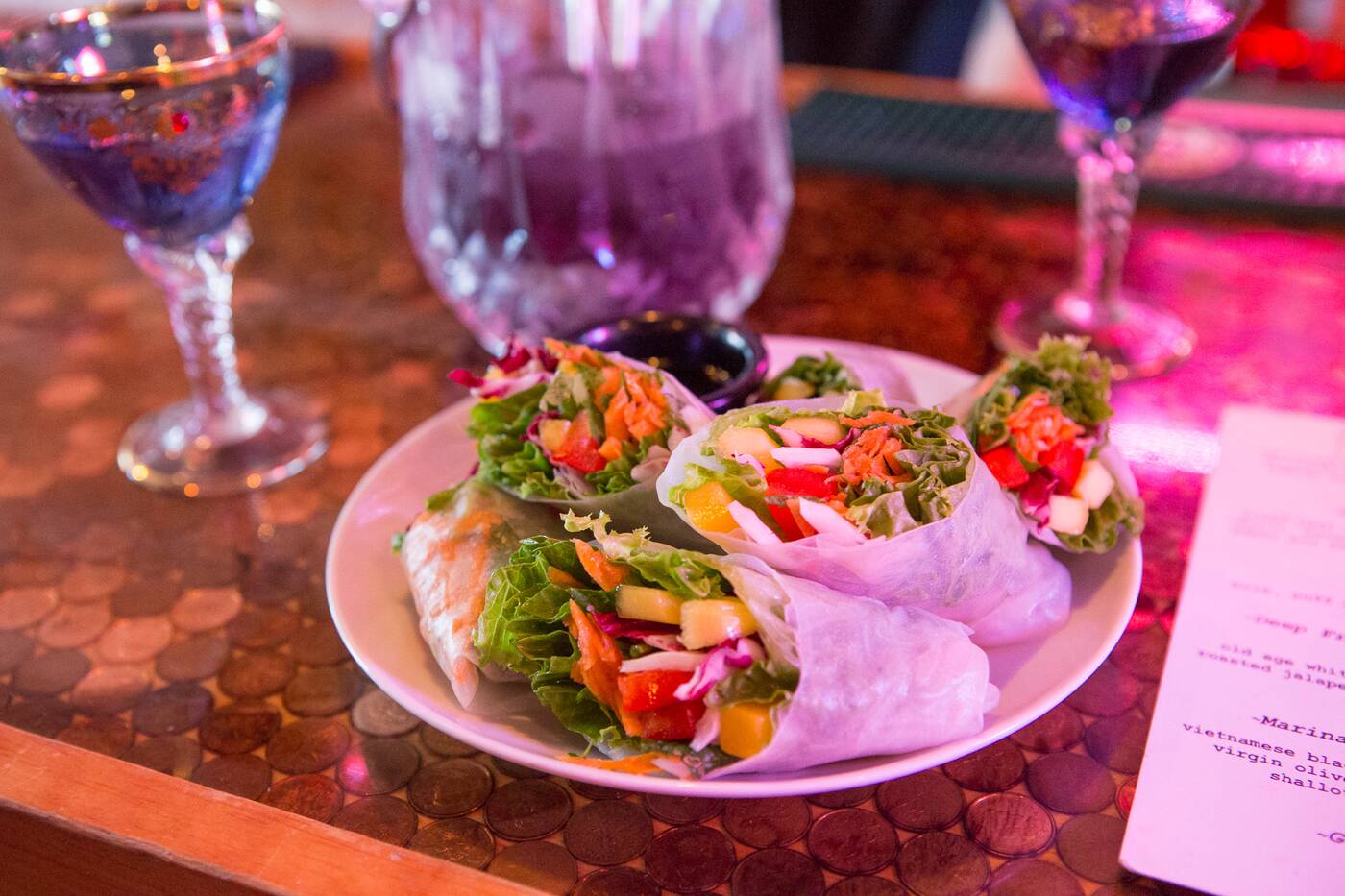 We end up going with the fresh salad rolls ($9) instead. They take almost an hour to arrive (Rocks is super apologetic about the wait).

The rolls make for a refreshing summer snack, but I'm not sure why they took so long, considering they don't require any cooking. 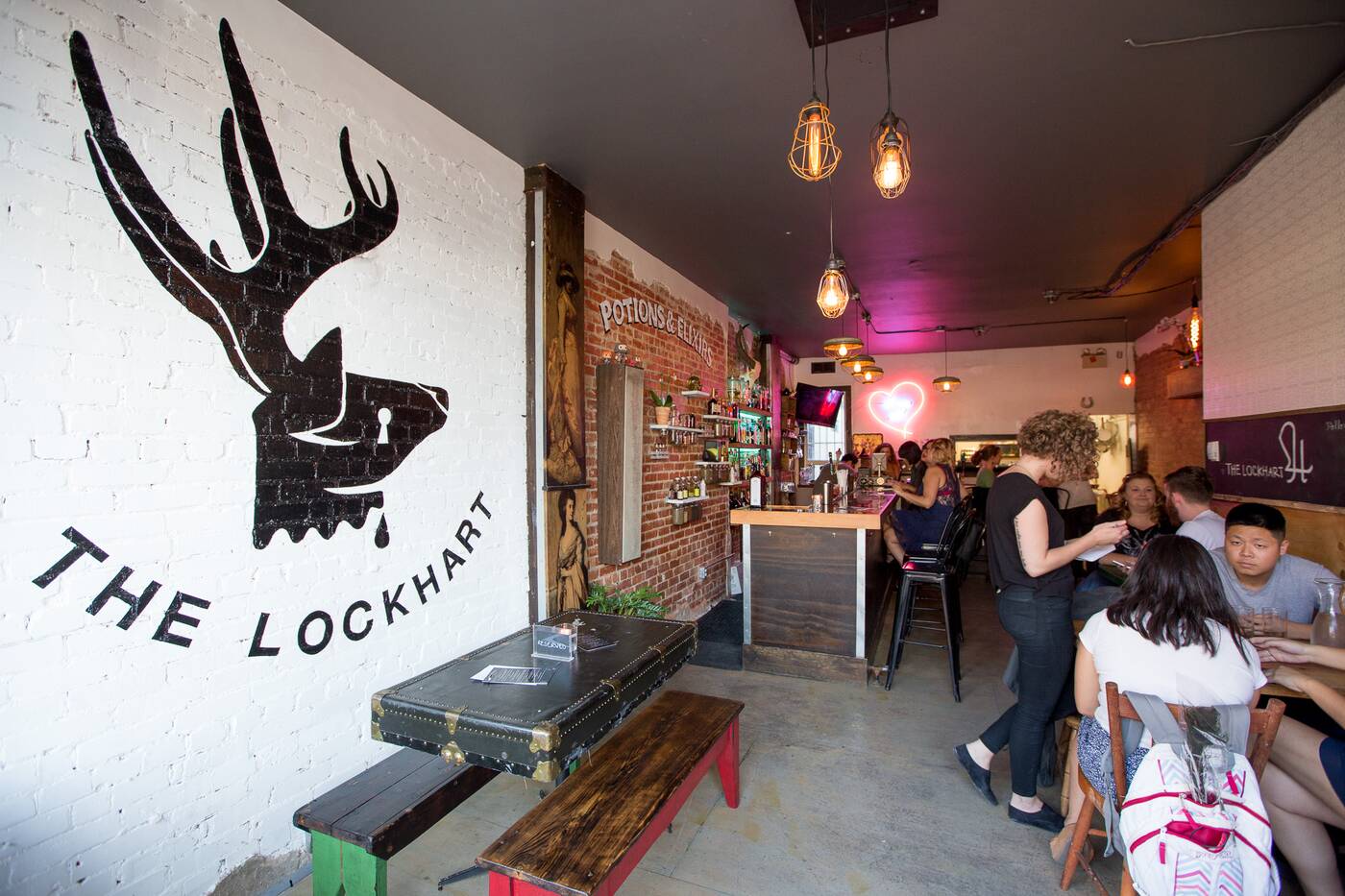 Rocks and Xerx have created a bar that doesn't feel like a cheesy gimmick, even if it's being portrayed and perceived that way by some (likely those who haven't actually stepped inside).

My friend and I are Muggles who aren't rabid HP fans and probably wouldn't have picked up on the references had we not known about them, yet we still enjoy ourselves. I'll return if the lineups don't get too ridiculous. 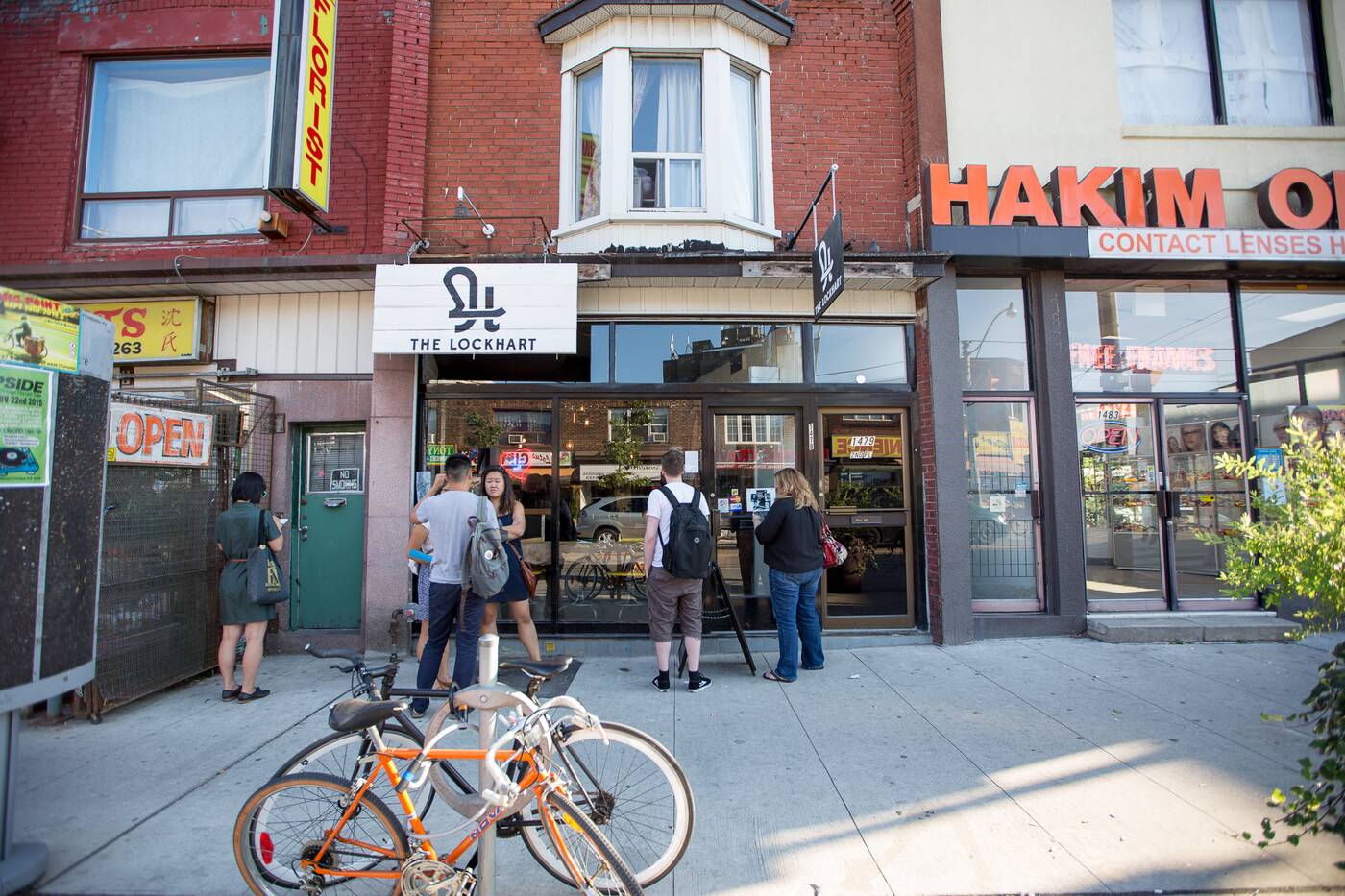