Gerrard Square can hardly be categorized as up-and-coming, but in recent years, this Leslieville neighbourhood mall has found itself at the axis of an area facing rapid change.

Evidently the 'Gerrard Scare' or 'Scary Square' days are over: the bustling mall at Gerrard and Pape has officially shed its reputation as a seedy corner where unwanted, threatening interactions were more common than not. 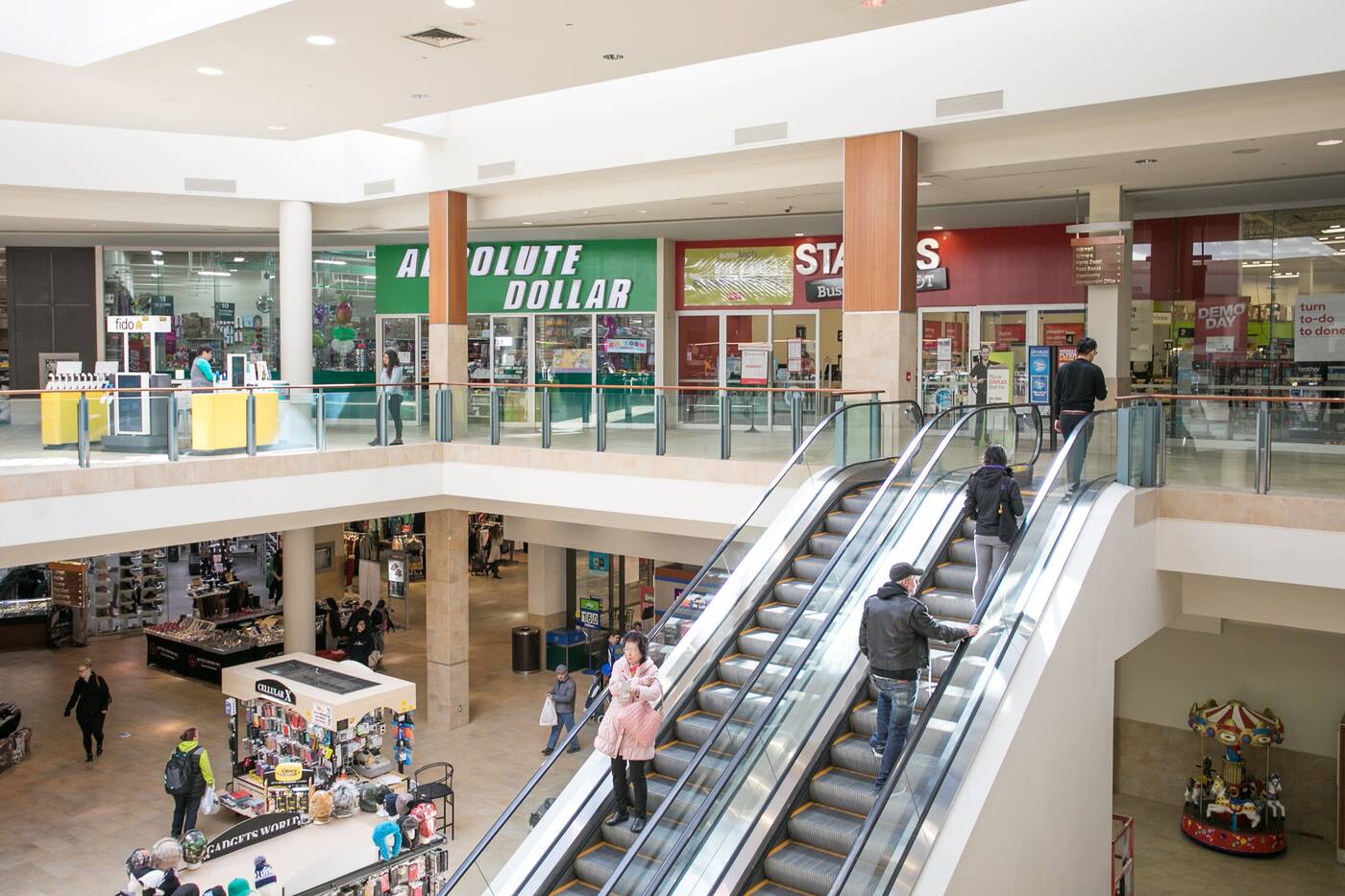 The two-level mall may look dated but it include popular retail stores like Walmart and Staples. Photo by Fareen Karim.

It was the early 2000s that marked the beginning of slow change that's culminated to the Gerrard Square area we see today.

The early arrival of brands like Winners, Home Depot, Food Basics, Walmart, and The Source (basically the royal flush of big-box stores) transformed the hulking building into a one-stop shop. 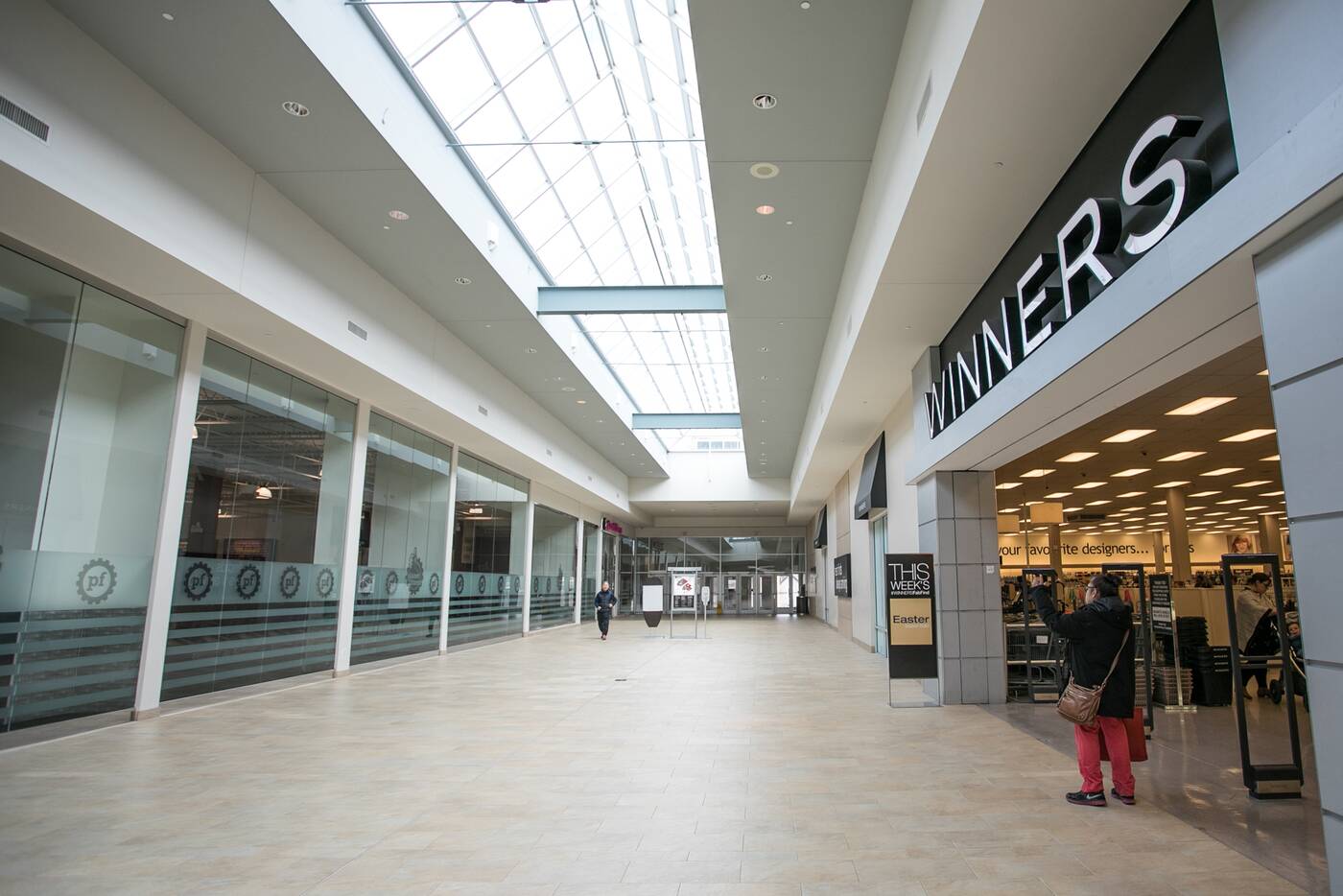 It may look empty but the Winners and Planet Fitness at Gerrard Square are popular budget options for shopping and working out. Photo by Fareen Karim.

Following that, there was the arrival of Grinder Coffee, and—gasp—a now shuttered Starbucks, around 2011 on Gerrard East between Pape and Jones. A couple of years later, the opening of Maple Leaf Tavern was another milestone. 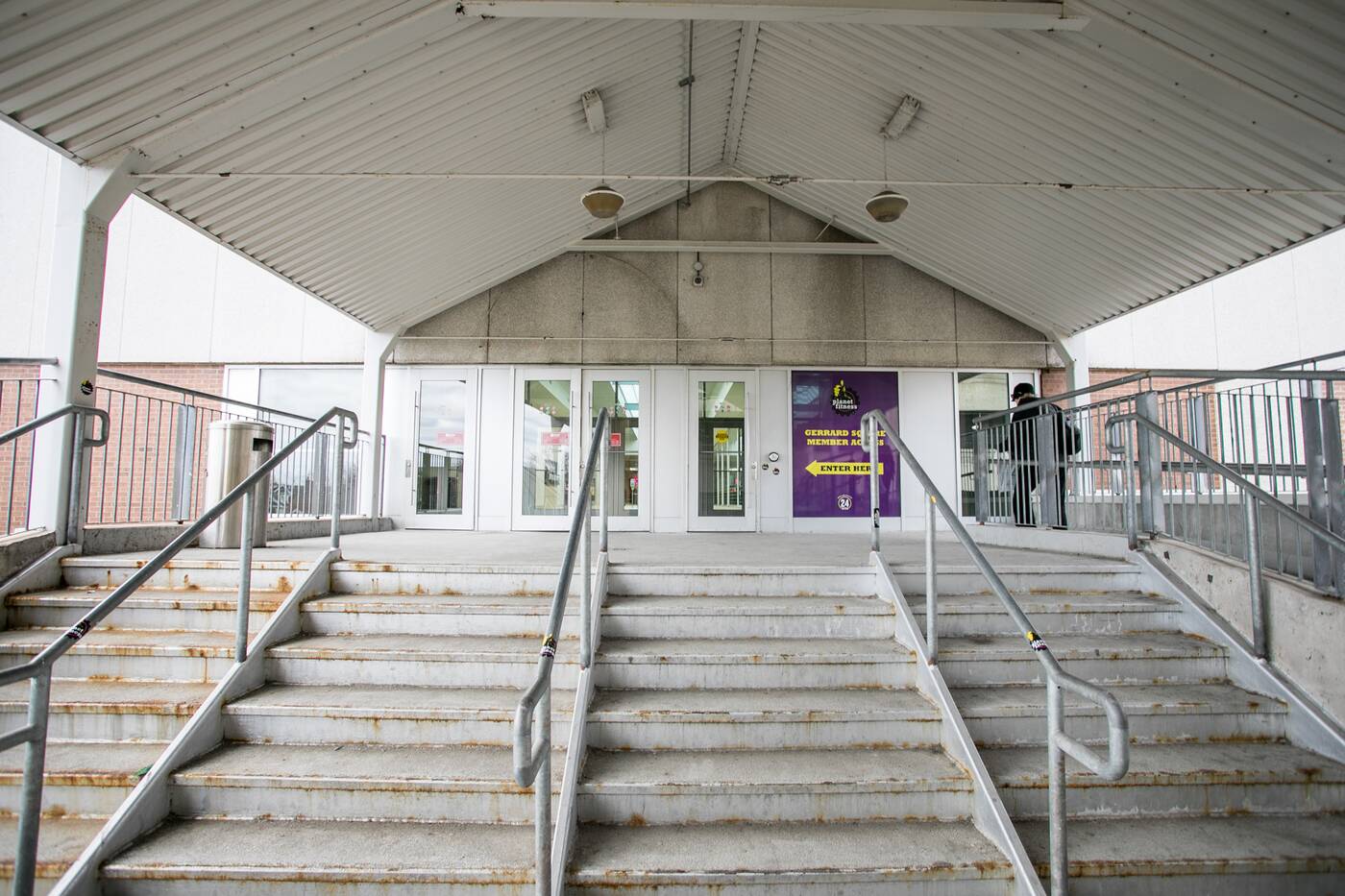 The entrances to Gerrard Square must be some of the worst of any mall in the entire city. Photo by Fareen Karim.

In recent years, a second wave of businesses moving east of Gerrard Square by Marjory Ave. (past the small, aging plaza with a couple of tech stores and a 24-hour pizza shop) has opened up the street even further. 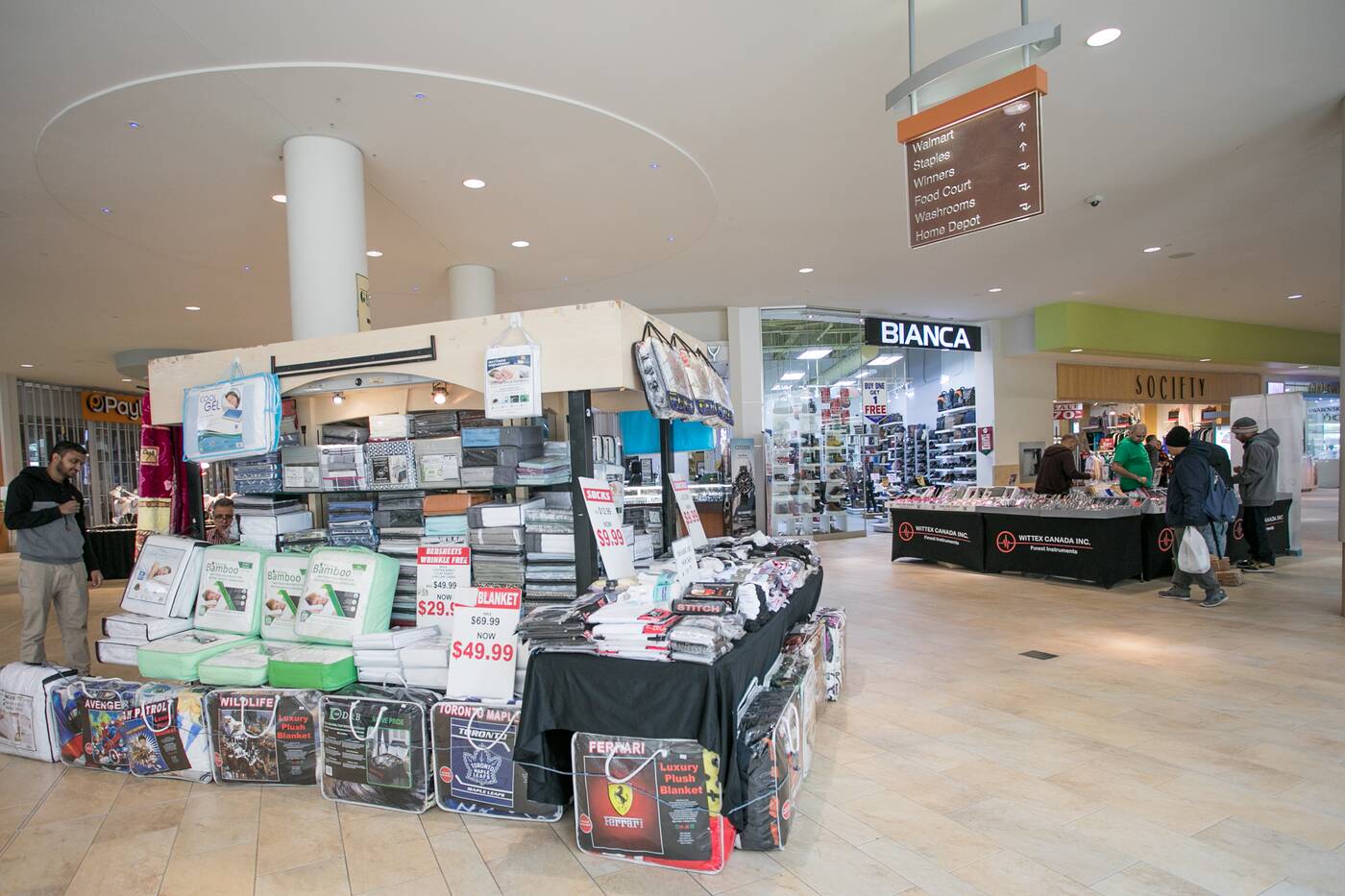 This isn't Yorkdale. The inside of Gerrard Square doesn't have the buzz or glamour of other Toronto malls. Photo by Fareen Karim.

Double D's, a second location of Yonge and Dundas's GB Hand-Pulled Noodles, and La Cubana may not be big box brands, but they're Toronto names in their own right, and signifiers of a new era on the Gerrard strip. 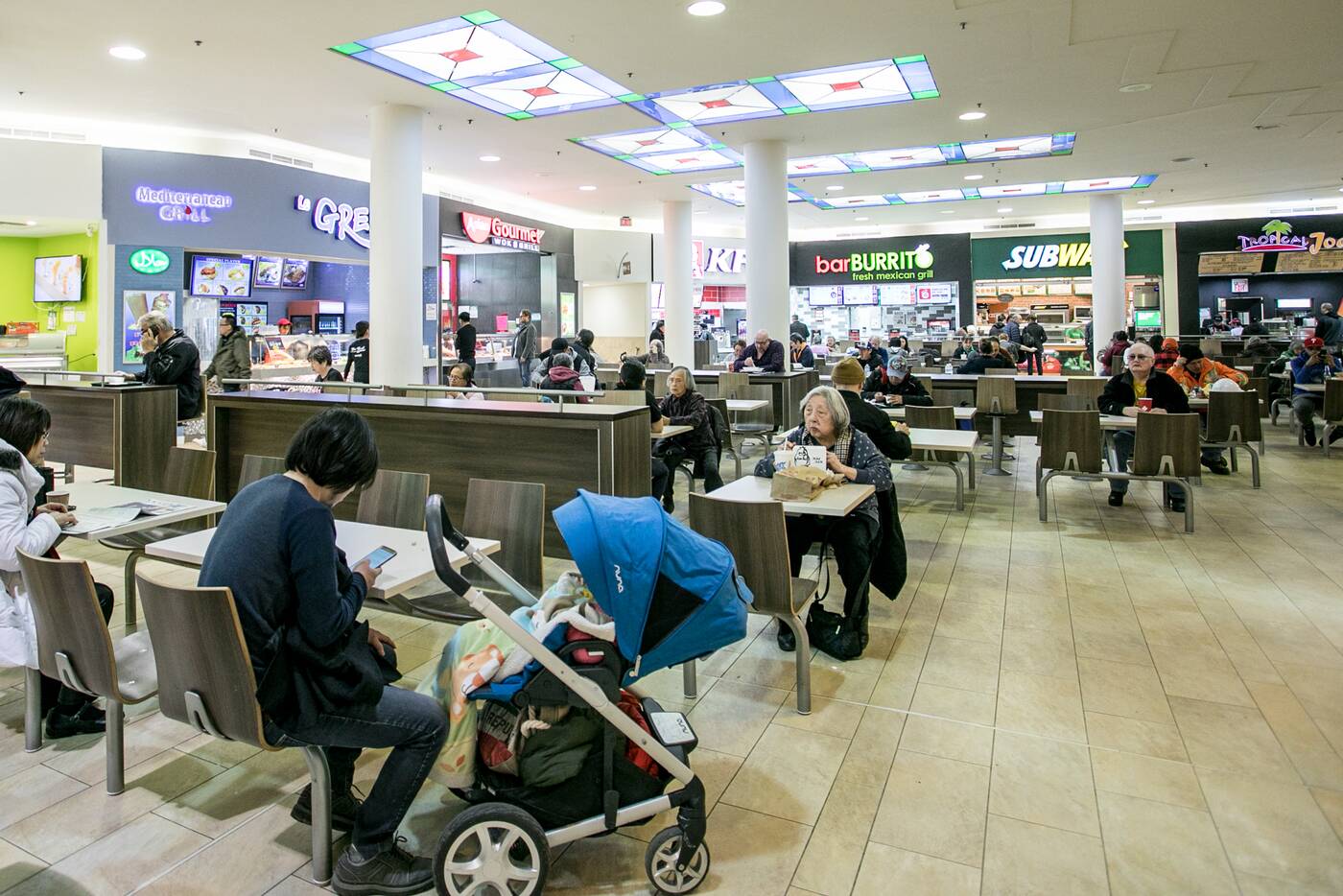 Some say the food court with a Tropical Joe's is the mall's main attraction. Photo by Fareen Karim.

And less than 500 metres east of the mall is the burgeoning corner of Gerrard and Jones, or, as the people behind Vatican Gift Shop and Pinkteron's call it, Gerrones, marking two new latenight spots where none really existed before.

But even as the area continues to build up, Gerrard Square itself appears to be impervious to the change. 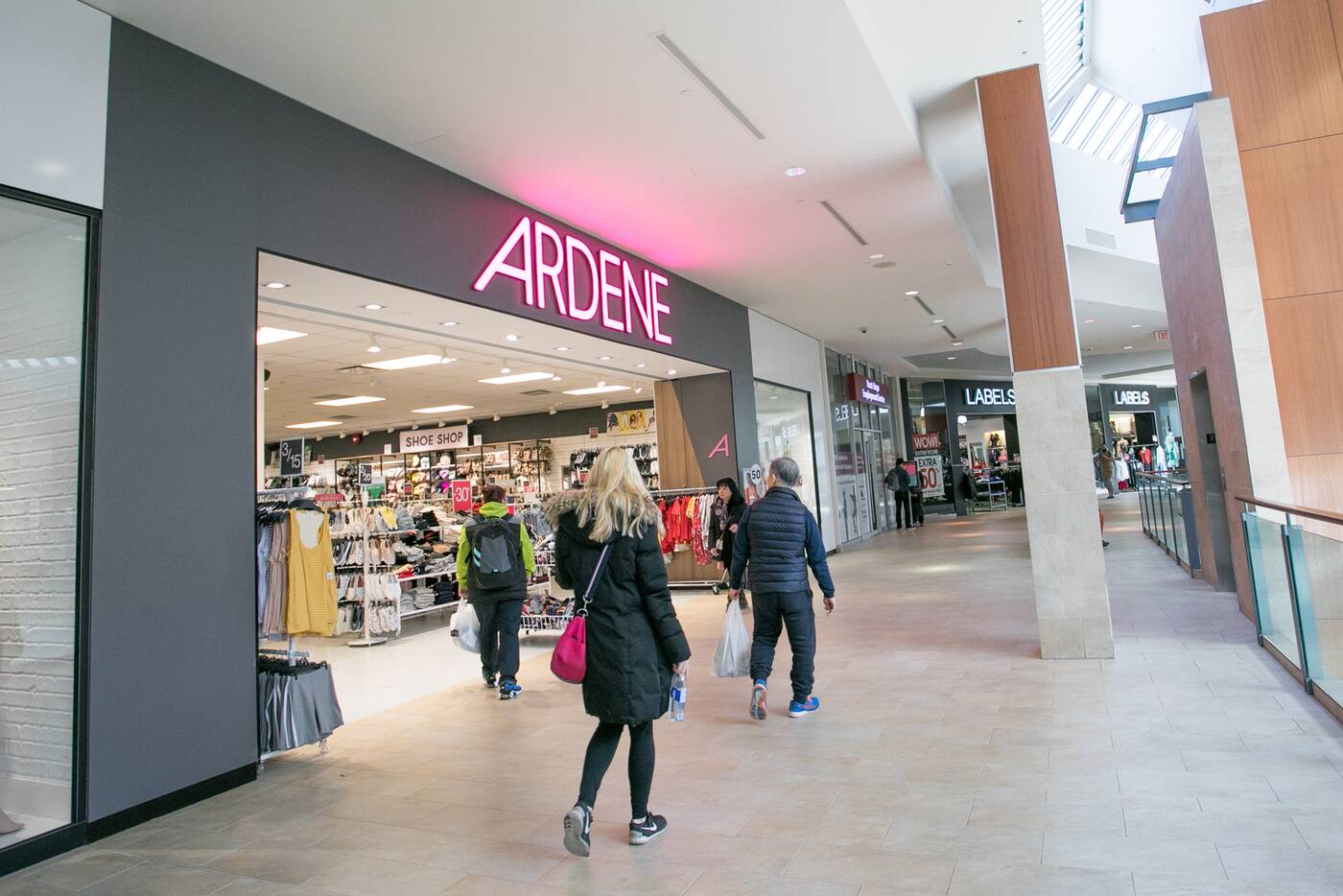 This is about as busy as it gets on the second level of the mall. Photo by Fareen Karim.

The brutalist foot bridge leading over the railway tracks still stands, connecting both dead ends of Pape Avenue in a strange, architectural wonder that offers one of the best views of the skyline. 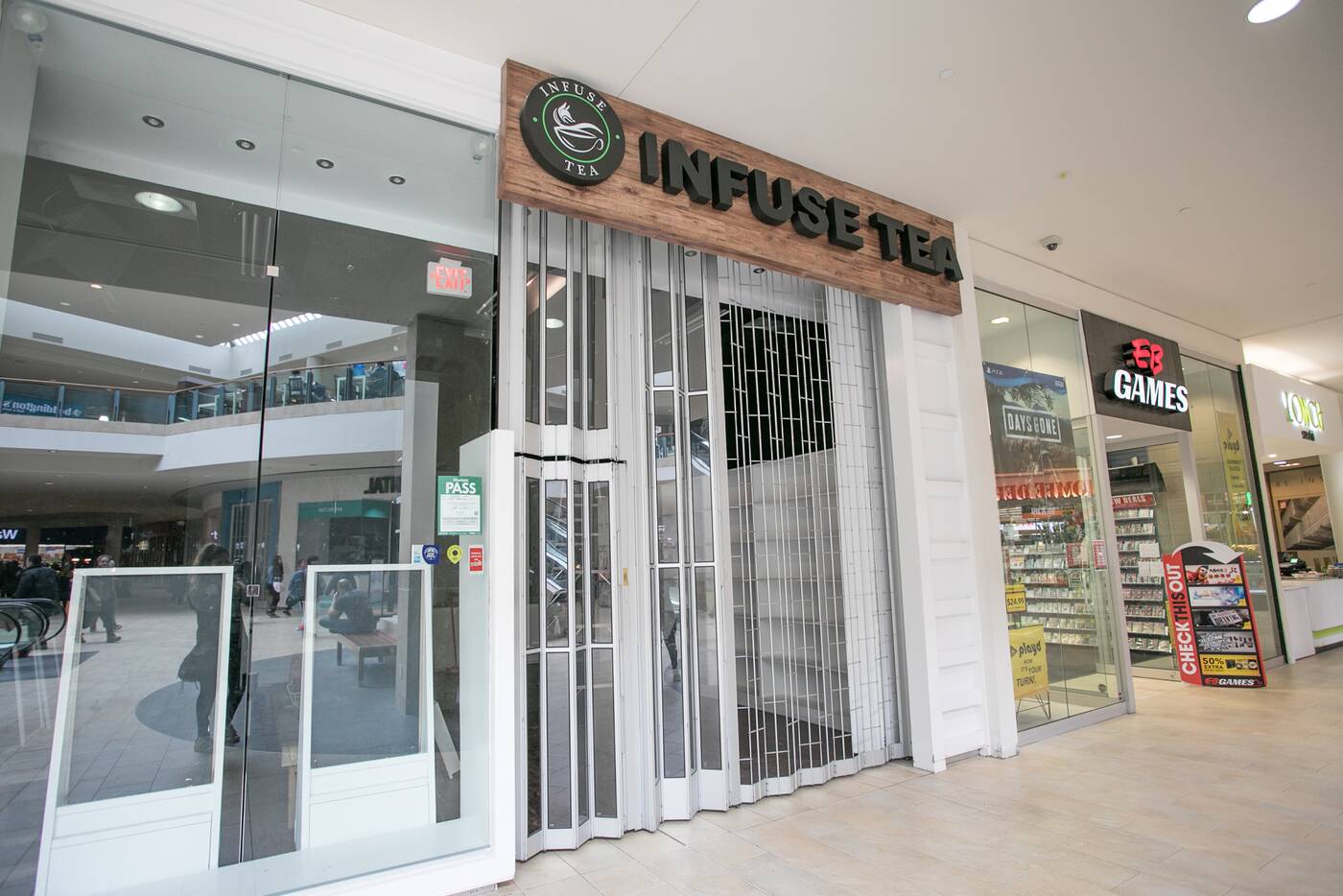 Some businesses like Infuse Tea have been unable to make it in the mall and have recently shuttered. Photo by Fareen Karim.

Aside from the very clutch amenities like Planet Fitness, hair gels from Sunrise Beauty Supplies, and the Ecko knock offs at Fashion World, Gerrard Square doesn't disappoint when it comes to food.

Gems inside include Kin-Kin's end of day sales on Chinese buns, and of course, the decade-old food court staple Tropical Joe's with its stuffed patties, coco bread, and unreal jerk poutine. (If you don't visit TJ's ,why even bother?) 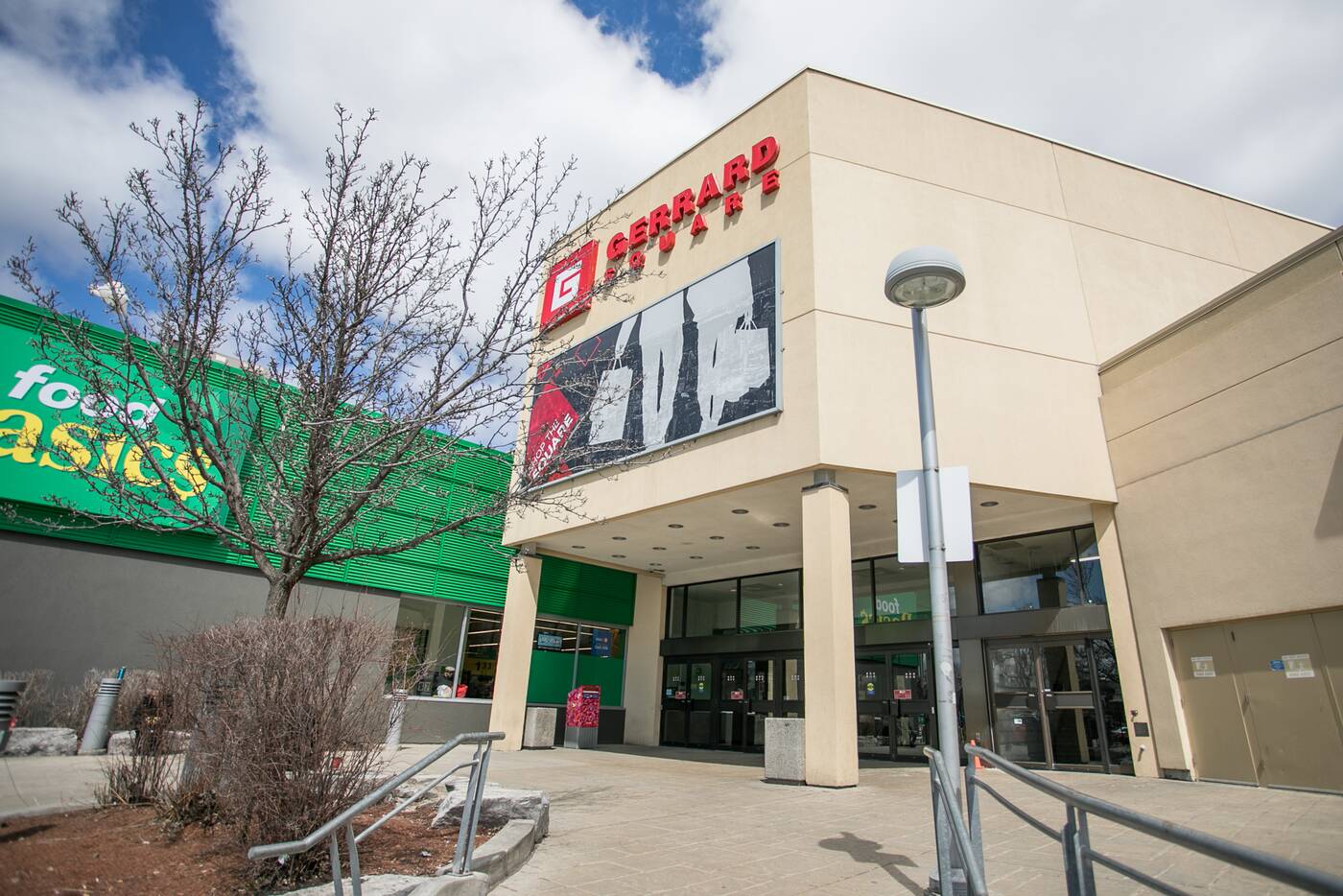 The main entance to the mall is confusing with no doors on Gerrard East itself. For pedestrians, it's easiest to go through the parking lot next to the Food Basics. Photo by Fareen Karim.

"I think it's always going to feel the same," says Matt Schachtebeck, owner of the vintage shop Coffee and Clothing, located outside on Pape's dead-end.

Schachtebeck says the shop was a direct beneficiary of Gerrard Square: when they first launched the store less than a year ago, they were in the mall every day for basics. 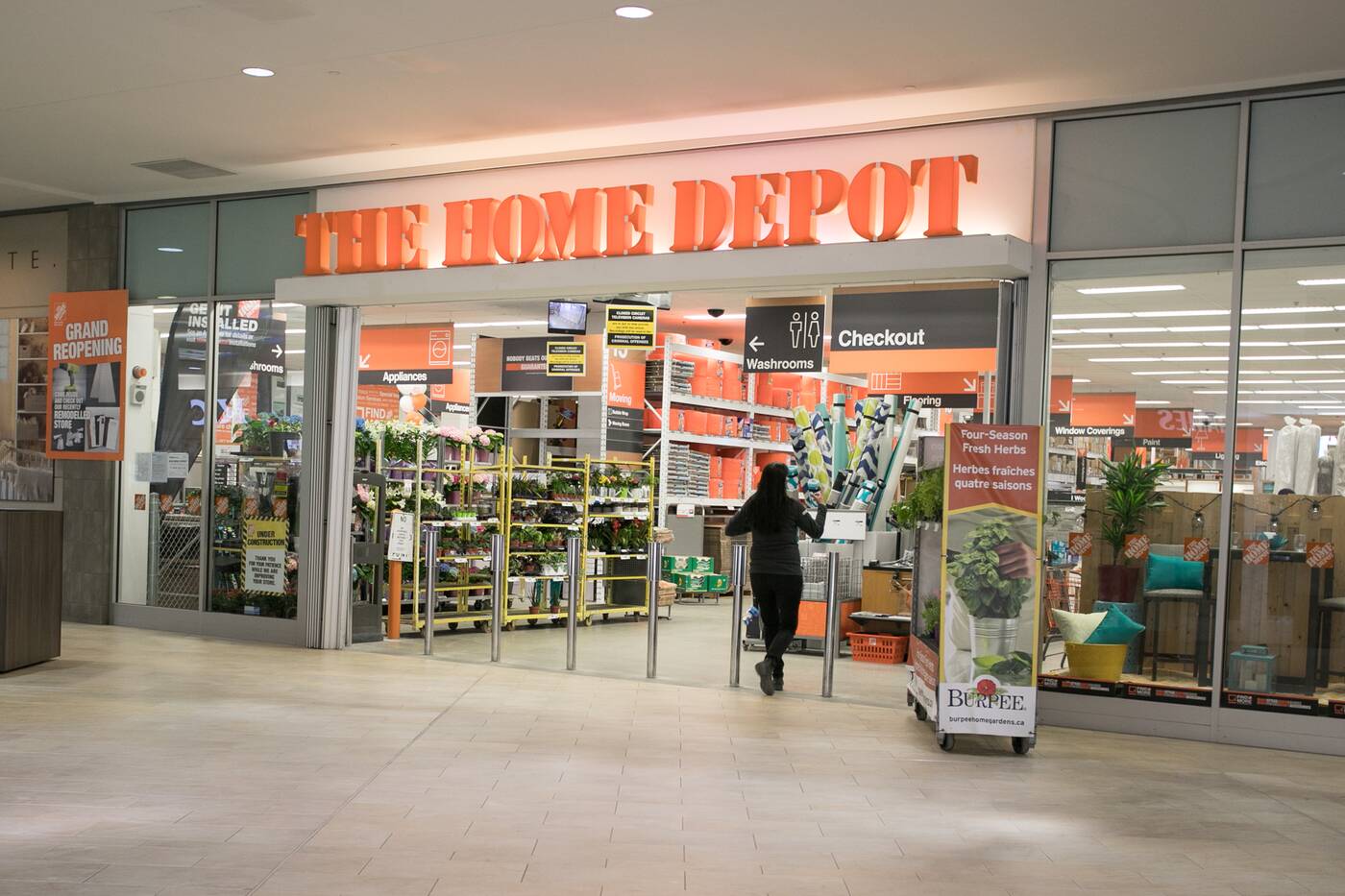 The Home Depot is an important tenant and takes up a huge footprint on the east side of Gerrard Square. Photo by Fareen Karim.

As newcomers to the city from San Francisco, Matt and his family view the area as a "direct representation of Toronto as a city."

"This area seems to embrace it, even though there is some gentrification, it's very authentic...even when new businesses come in, it's still the same." 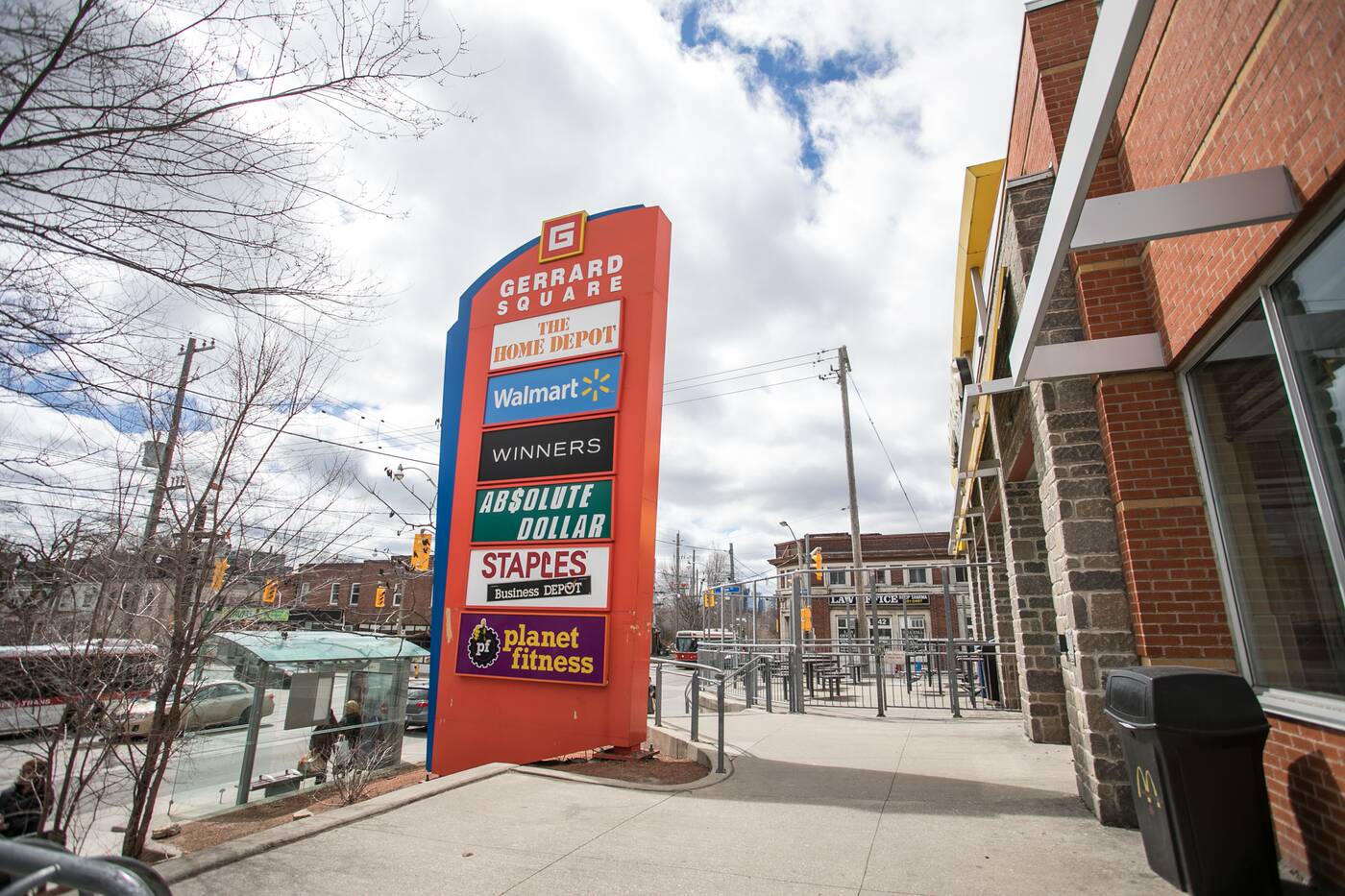 The signs sums up the brands that are keeping Gerrard Square a float. Photo by Fareen Karim.