With Starbucks on the way, is Gerrard East on the rise?

Gerrard Street between Gerrard Square and Jones isn't exactly a Toronto destination. At least not right now. While it offers several places from which to buy a Mars bar, or wash your clothes, or get a cheap spook at night (ok, that isn't a good thing), its reputation is less than venerable in the eyes of many Torontonians.

But perhaps that's about to change. Unlike the struggles currently facing Little India, which is a little further east along Gerrard, the opening of Great Burger Kitchen last April hinted that something was in the air, followed by Grinder Coffee's arrival in May. And now gentrification in its most raw form--that is, a Starbucks--is set to take hold of Gerrard East.

Construction of what was formerly "Raymond's Kitchen" has been going on for months as the corner of Gerrard and Jones awaits the coffee giant's arrival. Adjacent is Riverdale Collegiate Institute, with a Pizza Pizza outlet across the street. I headed a few doors down to Great Burger Kitchen to see what they thought about their neighbour-to-be.

While I didn't catch owners Ted Koutsogiannopoulos and Jim Gontis, a staffer at the counter told me that they're looking at the new Starbucks optimistically. "This year, the street has really been picking up," she said. "More people are paying attention, and we think the Starbucks will enhance that."

"When we moved in it was really sketchy. But it's been getting better. Even Gerrard Square is picking up." 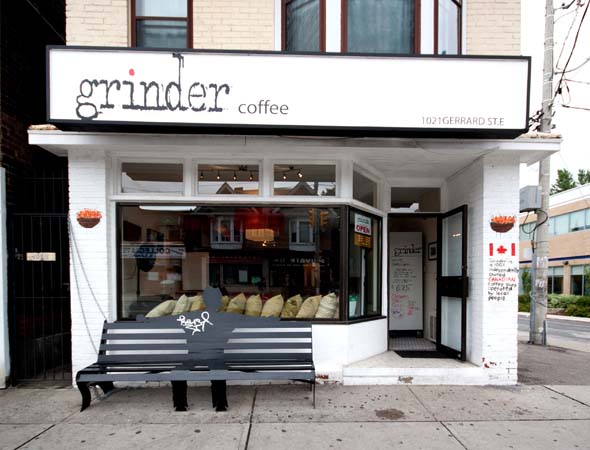 True, Gerrard square is one of those unique malls in Toronto where you can pick up "a hammer, some socks, a notebook and bananas," as Grinder's Euan Mowat tells me. "My first thought is it's good, maybe it'll bring some more owners here," Mowat says when I ask him what he thinks about Starbucks moving in. "When a Starbucks opens up, it can make people feel like it's safer to invest in that area. If I was one of the owners of the vacant storefronts right now, I would be over the moon."

Indeed, there are a number of storefronts with nothing but paper in their windows. And it seems residential landlords are already using the not-yet-open Starbucks to sell their spaces.

"I'm hoping the neighbourhood does get a lift," Mowat says. "But I hope it's not more of the Pizza Pizza's, but more independent places instead. That's what will put people on the street."

"For all of the issues one might have with Starbucks," Mowat continues, "it'll bring more people to the area. And if there are more people, everyone will get a little run off of that."