Black Dice is known for fifties vibes and a wide selection of Japanese whisky, sake and craft beer.

Owner Hideki Saito has been in the industry since his teens, working in management positions at Japanese restaurants, and at similarly somewhat rockabilly-themed Disgraceland. 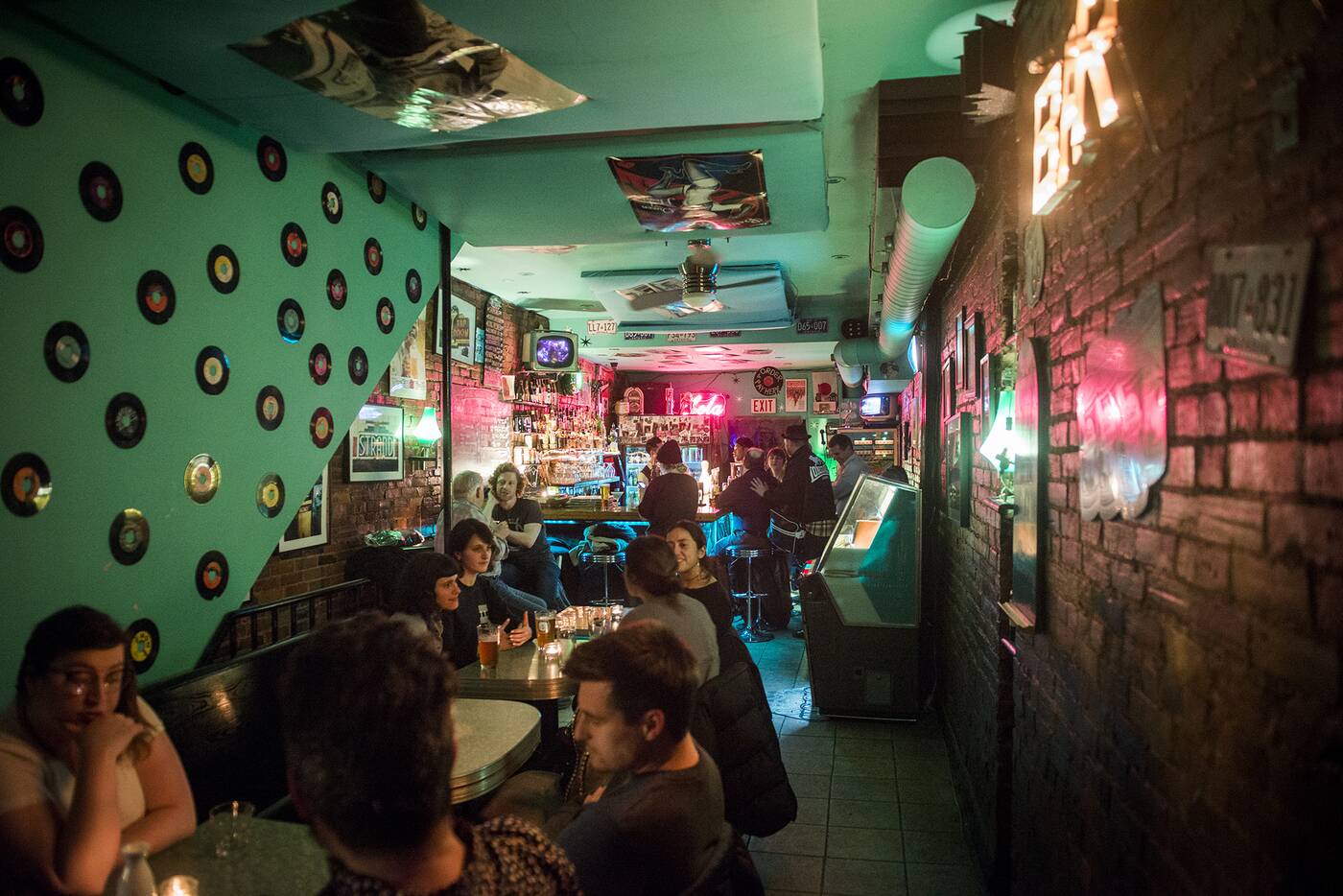 With a unique selection of beverages, cocktails and bar snacks, this place stands out at the western end of a stretch of bars along Dundas West.

Saito says his wife helped him design the space, but many items on the walls are from his personal collection. 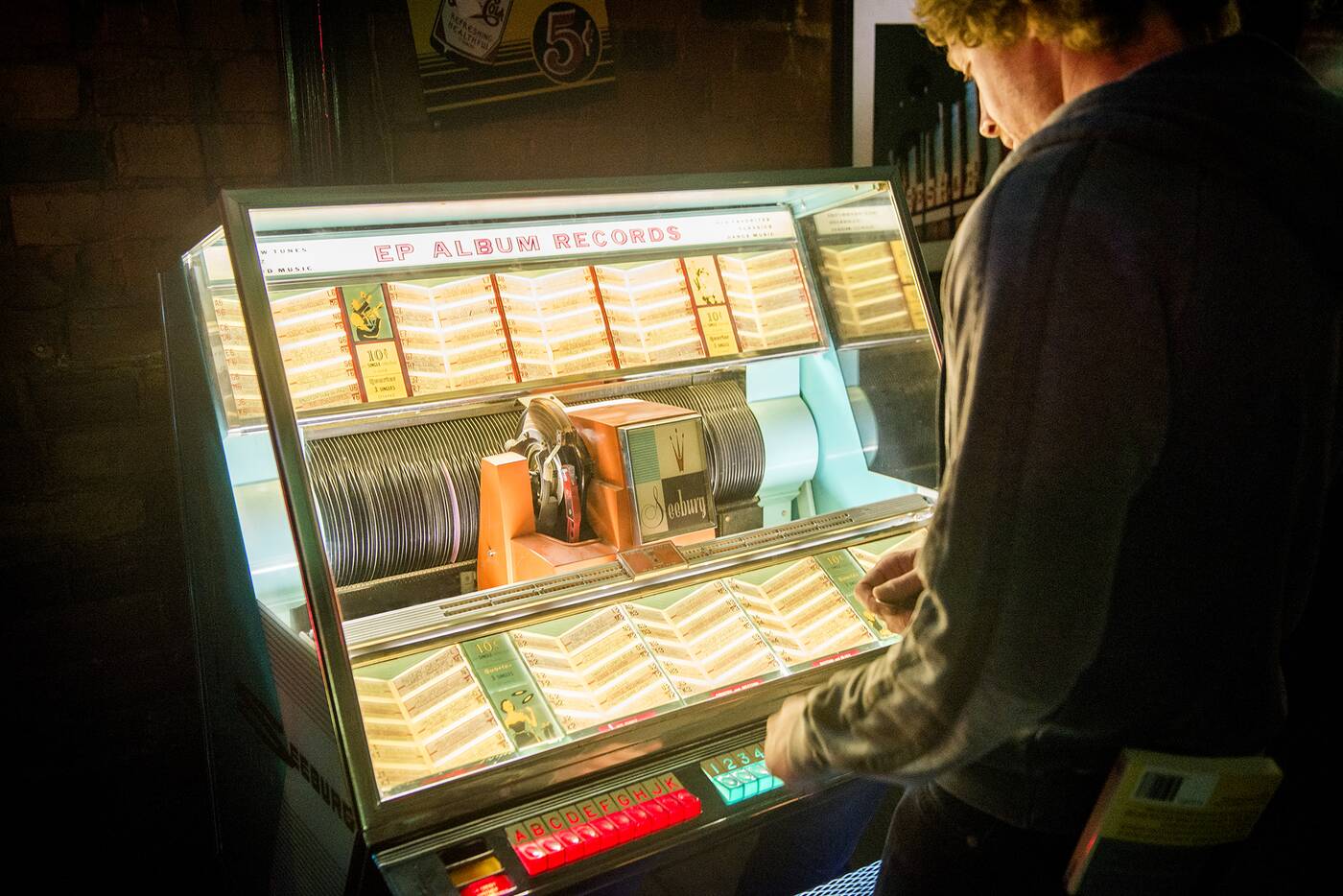 If you look carefully, among the bowling-pin-shaped lamps and operational jukebox lie some gems. 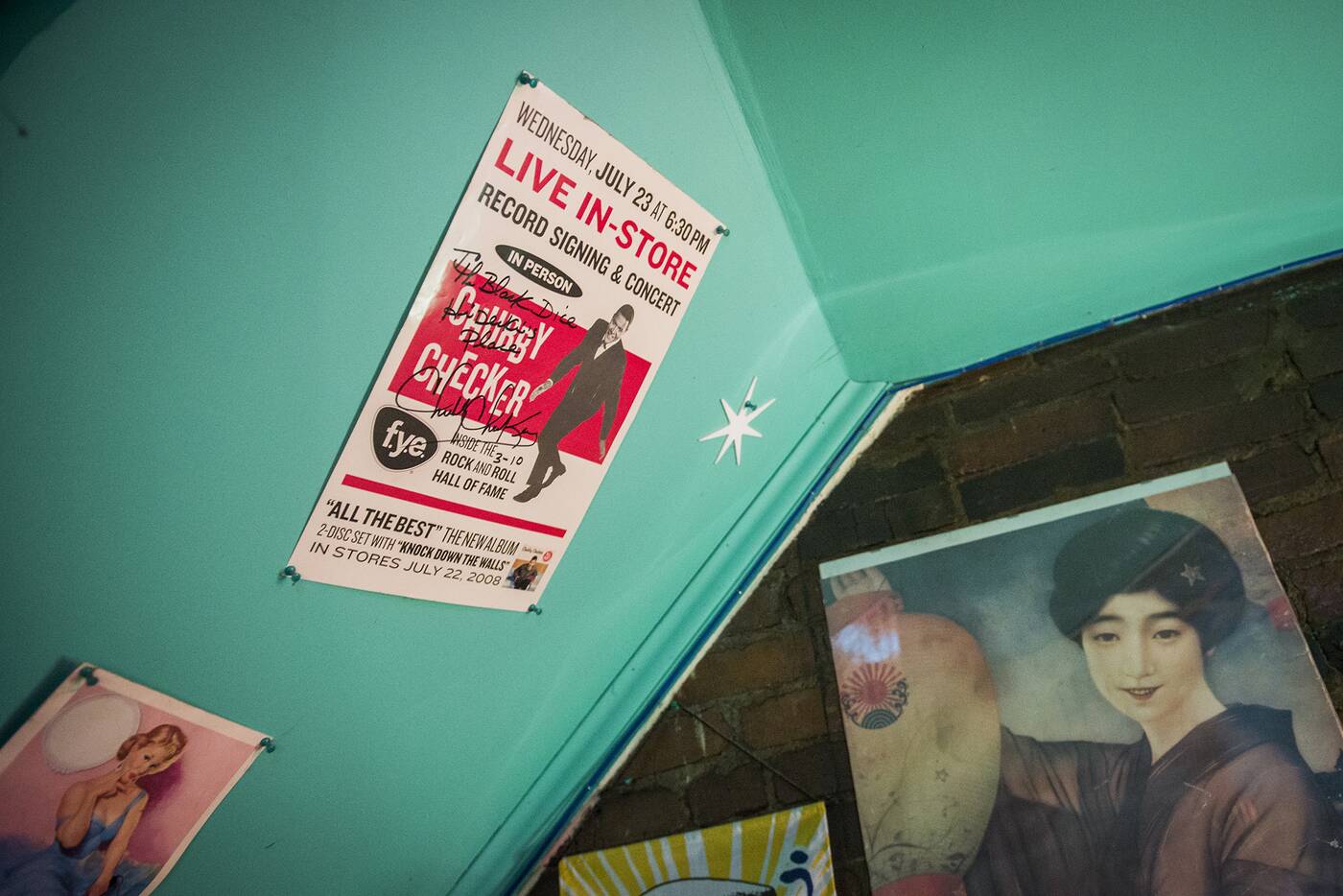 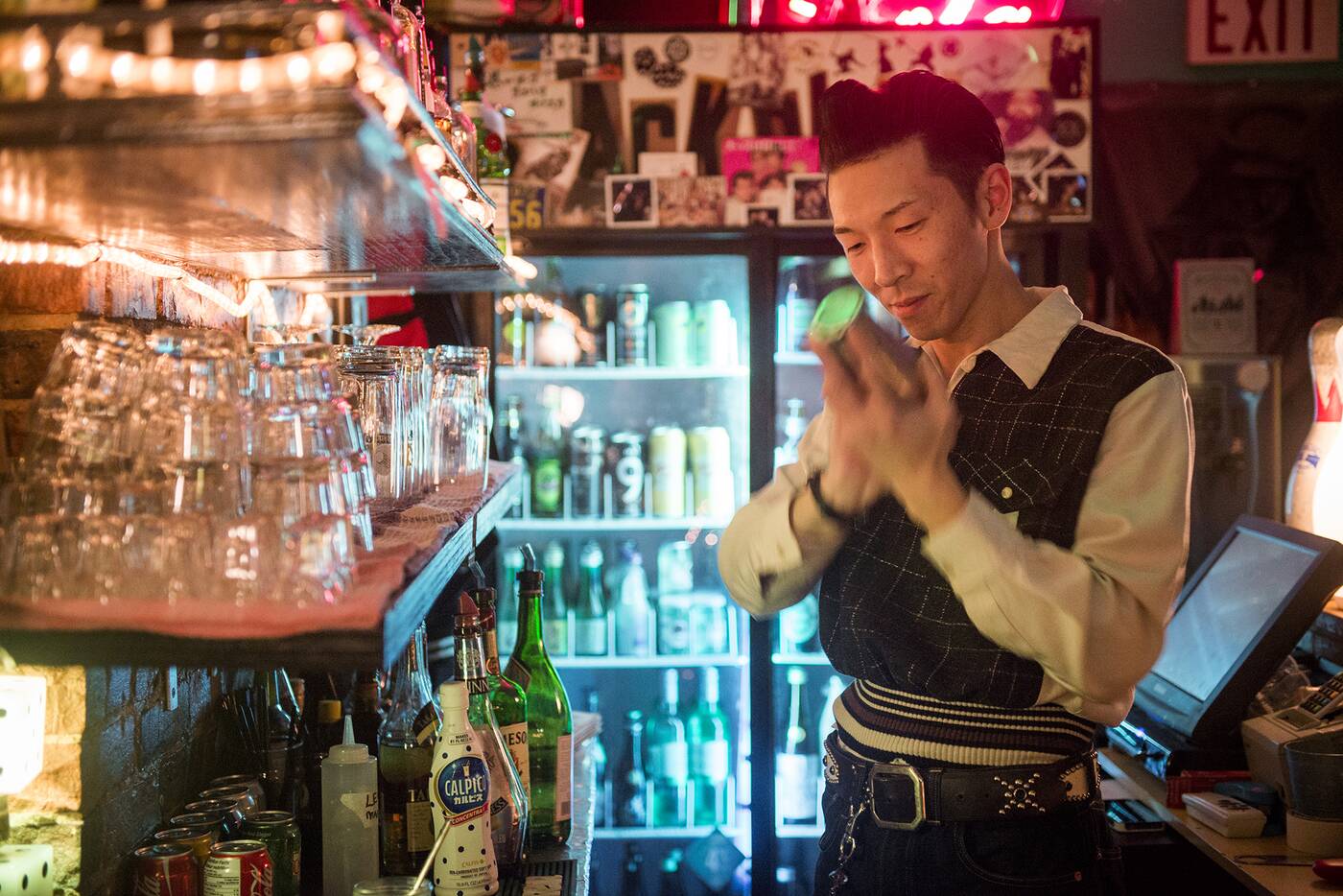 Saito himself comes off as looking like he just stepped out of an Archie comic or even Cowboy Bebop. He appears to be the only person working during my visit, bouncing effortlessly between taps, customers, and snack preparation. 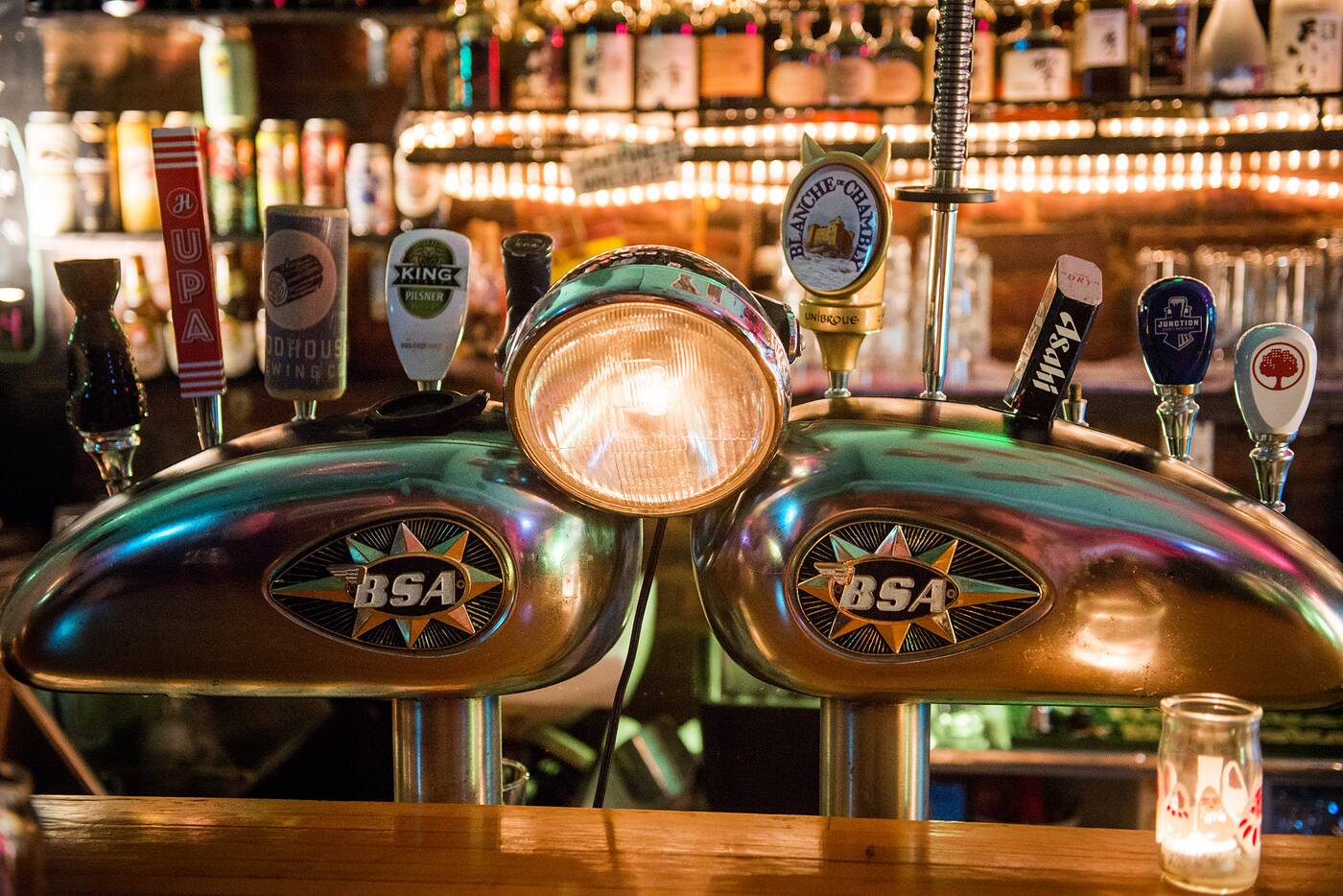 While many Japanese whiskies and cocktails are available, most of the crowd on the Tuesday night of my visit seem to be downing simple draft beers, though even these are available from taps made impressively from old motorcycle parts. 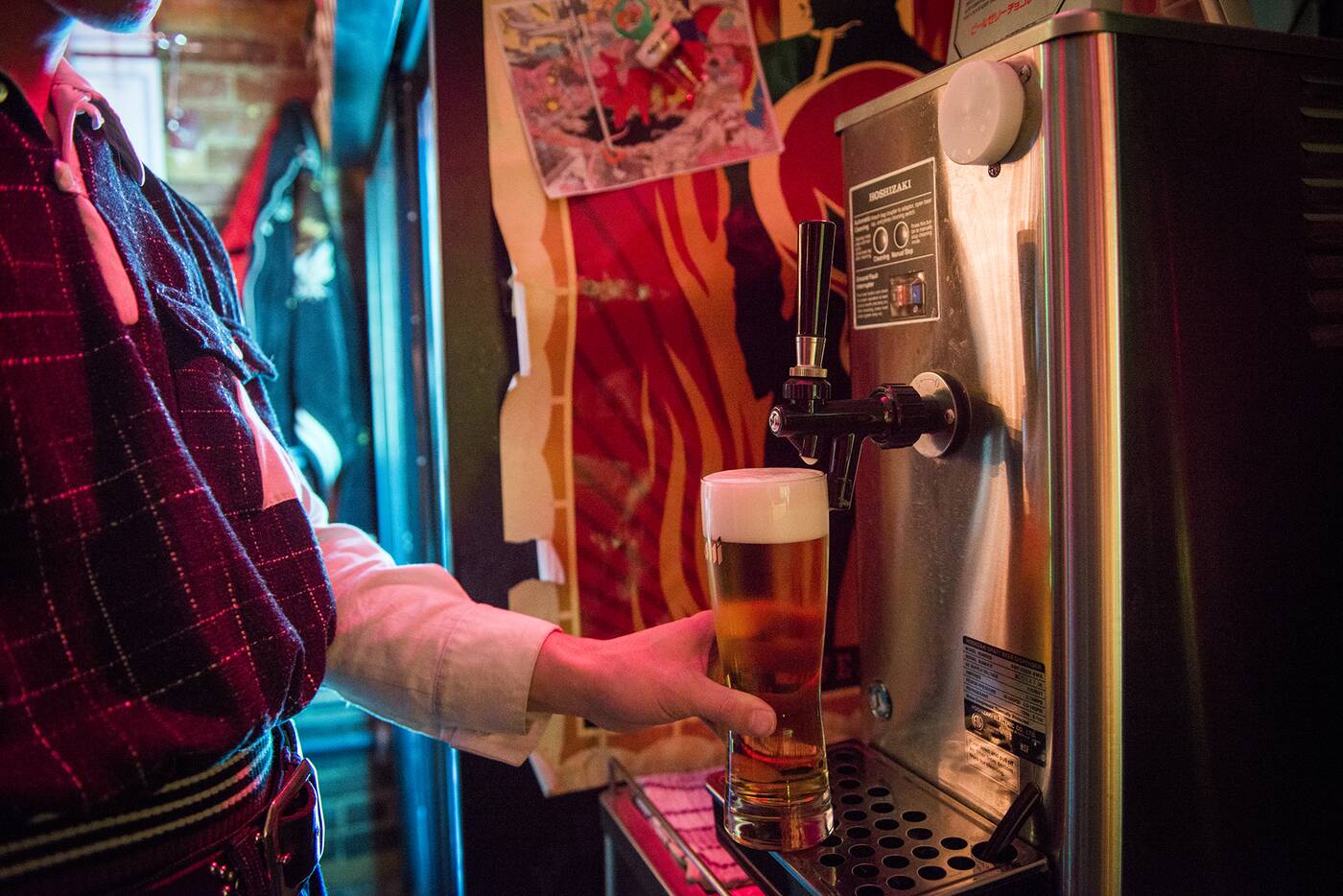 Asahi ($9) is available on tap too, but from a special machine that keeps the beer super crisp in addition to having a second tap just for releasing foam, so bartenders can create the perfect head to seal in the beer’s flavour. 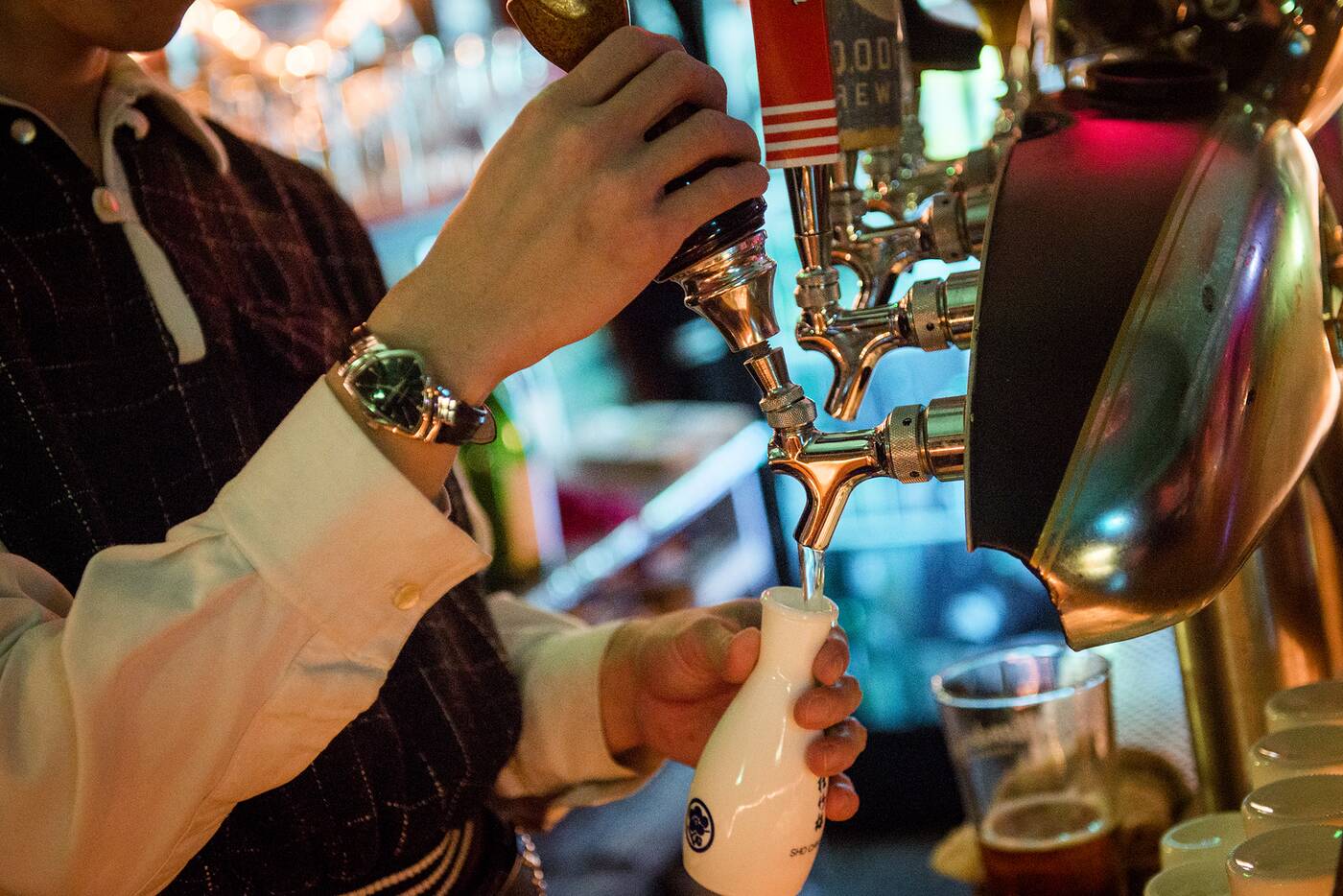 Instead of beer we go for a large sharable 9 ounce shareable portion of the Sho Chiku Bai sake, poured from the tap directly into a traditional container and served with tiny traditional cups. 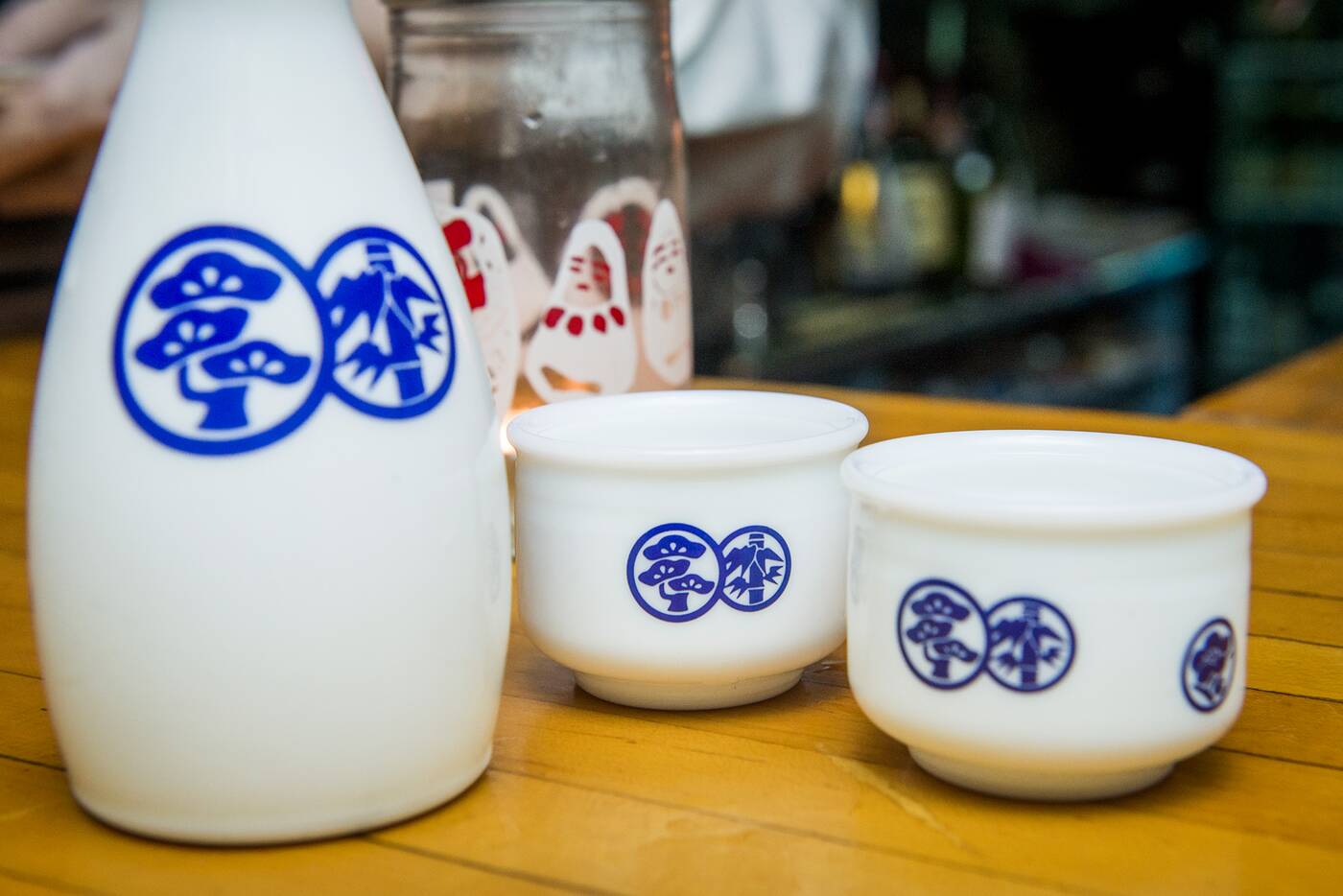 Whether sipped or slammed, this sake is light and floral, almost more like a wine than a spirit. Saito has plans to add a second sake tap at some point. 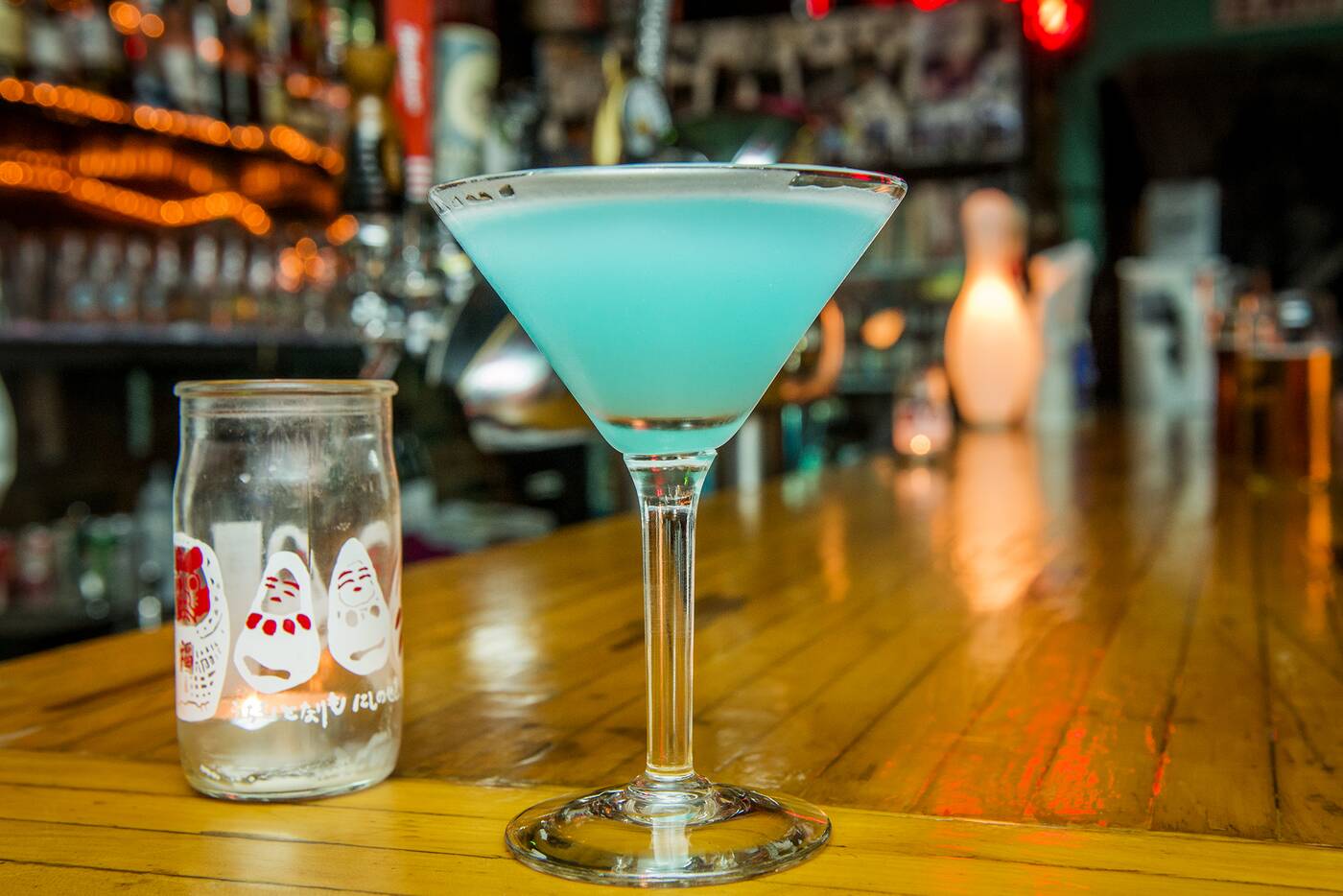 I figure I should at least give a cocktail a try, and Saito recommends the Ronin ($10) made with vodka, sake, and Asian ingredient Calpico. Though blue flavouring gives it a neon colour that matches the walls, the main flavour here is potent and saccharine peach flavouring. 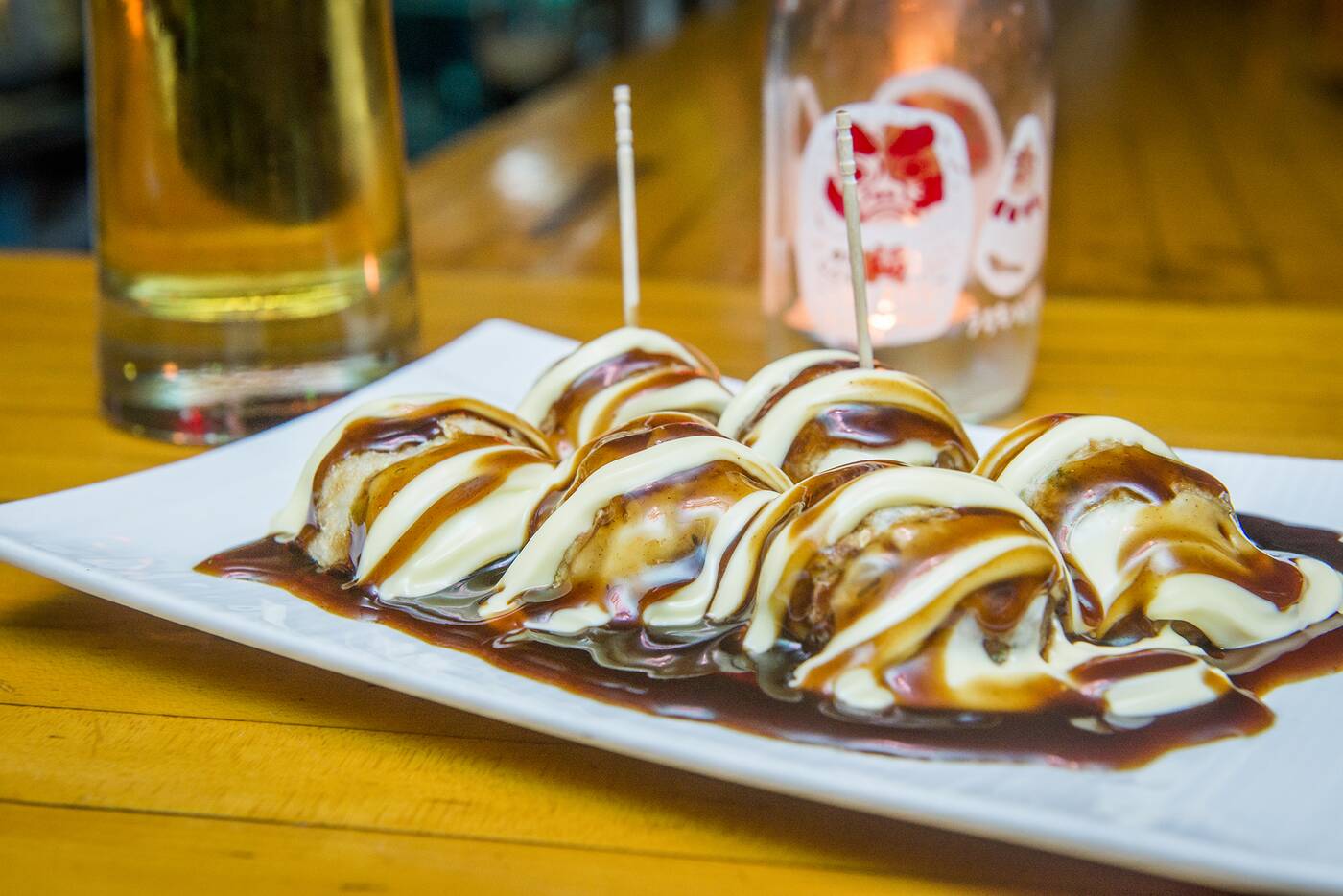 Six-dollar bar snacks come in the form of Pogos and even retro TV dinners for $10, but we go more Japanese again with chewy takoyaki (deep-fried octopus balls) doused in takoyaki sauce and kewpie mayo. 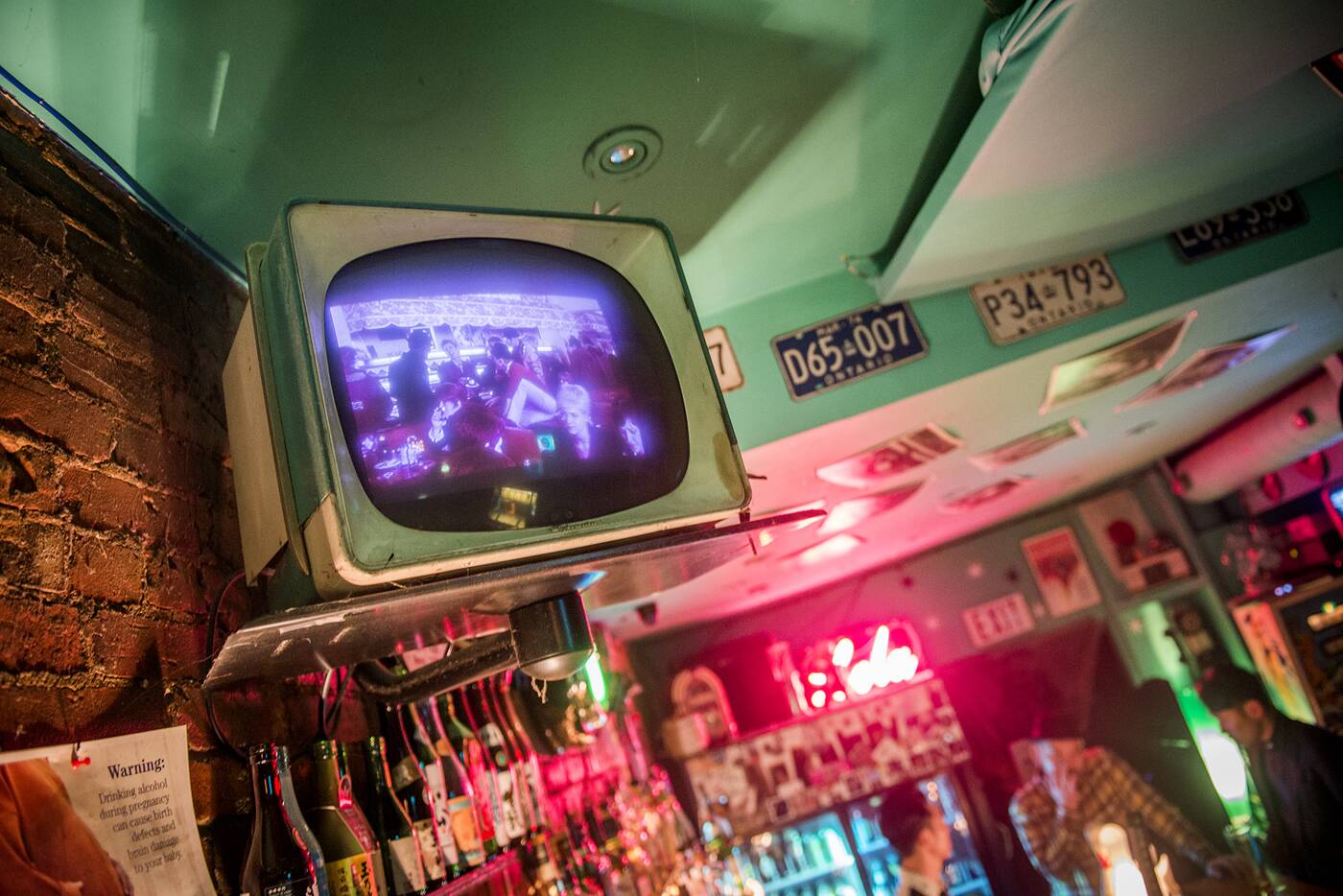 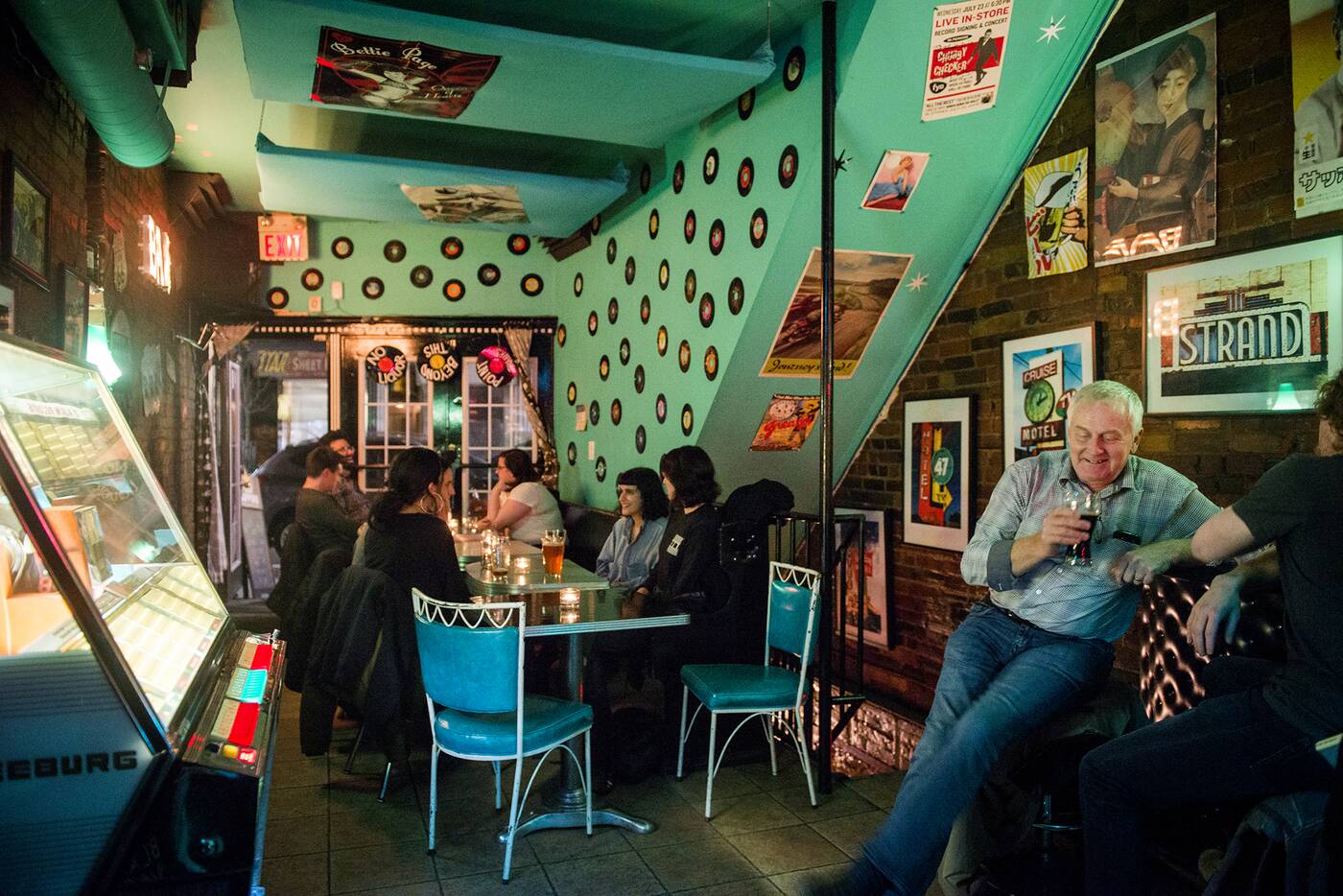 The images create a funky counterpoint to the 45s Saito spins himself Mondays and Tuesdays, playing retro hits like “Everyday” by Buddy Holly as well as “Leader of the Pack” and “You Never Can Tell.” 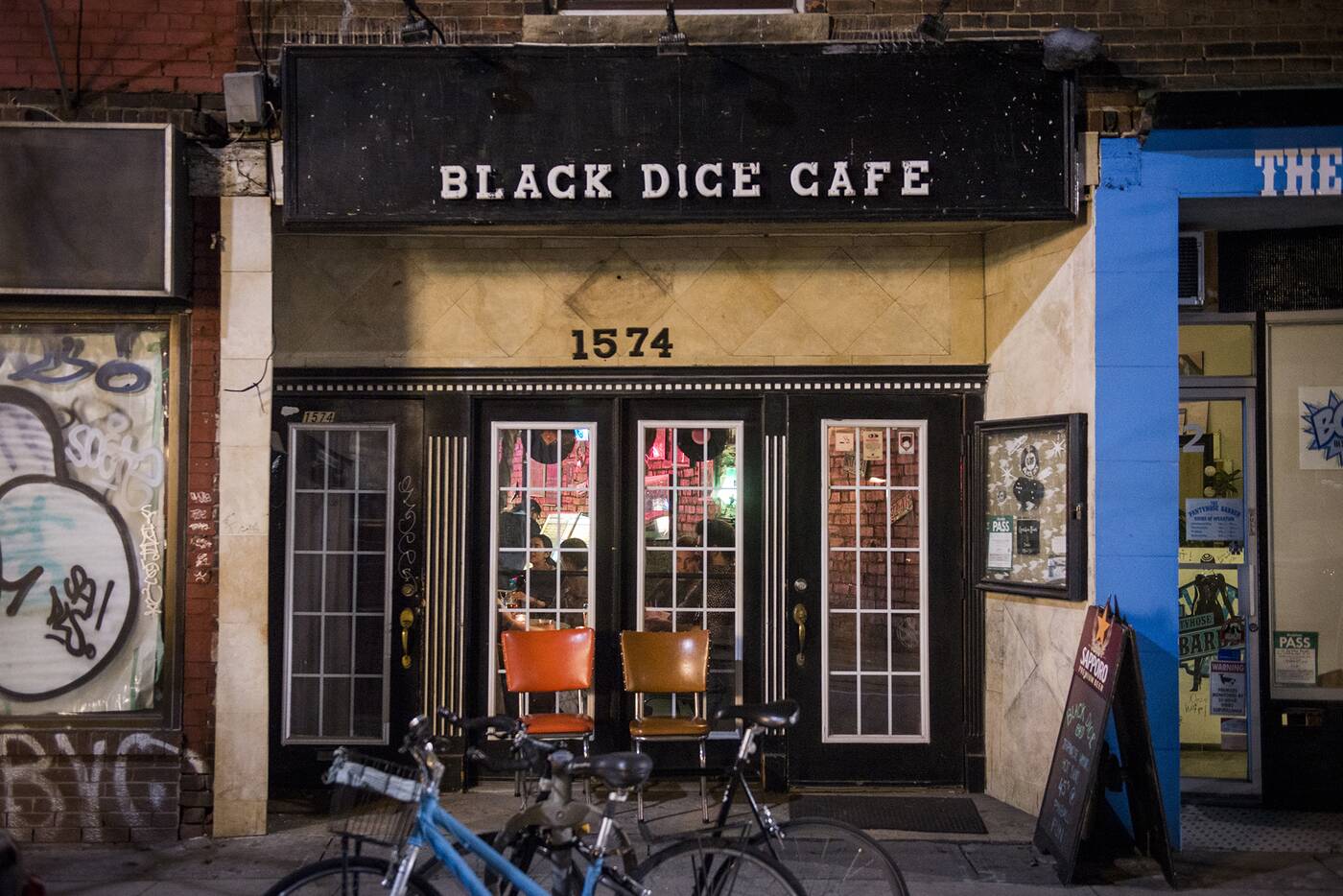