Restaurants open on Christmas Day in Toronto for 2020 will only be available for delivery and takeout due to the ongoing pandemic and the city being under lockdown measures. However, that doesn't mean you'll be stuck eating leftovers, as there are plenty of tasty options to devour at home.

Here's a round-up of restaurants open on Christmas Day in Toronto this year.

Only the Avenue Road location of this Toronto pizza joint will be open for business on December 25. They'll be slinging some of the best pizza in the city from 11:30 a.m. to 10 p.m.

This Indian restaurant in the Entertainment District will be open for the duration of the day from 11:30 a.m. to 11 p.m.

The Turkish bakery and cafe on King West will be staying open come the holidays. Visit on December 25 between 8:30 a.m. to 3:30 p.m.

Get your fill of Halal burgers at both their Danforth and Corktown locations come Christmas Day. Both shops will be open from 11 a.m. to midnight.

Between 11:30 a.m. to 10 p.m. you'll be able to get your fill of traditional Indian dishes at this spot at Yonge & Davisville.

Steamed buns, dumplings, spring rolls and more are all on the takeout menu Christmas Day at this dim sum restaurant in Chinatown. They'll be open for their regular hours.

The 24-hour restaurant by Yonge & Bloor will be open to dish out their regular menu of great eats along with their famous Christmas turkey dinners.

The Middle Eastern restaurant on Geary will be keeping their doors open on Christmas Day between the hours of 10 a.m. to 4 p.m.

Get your fill of Chinese barbecue at this Scarborough takeout joint from 10 a.m. to 6 p.m. 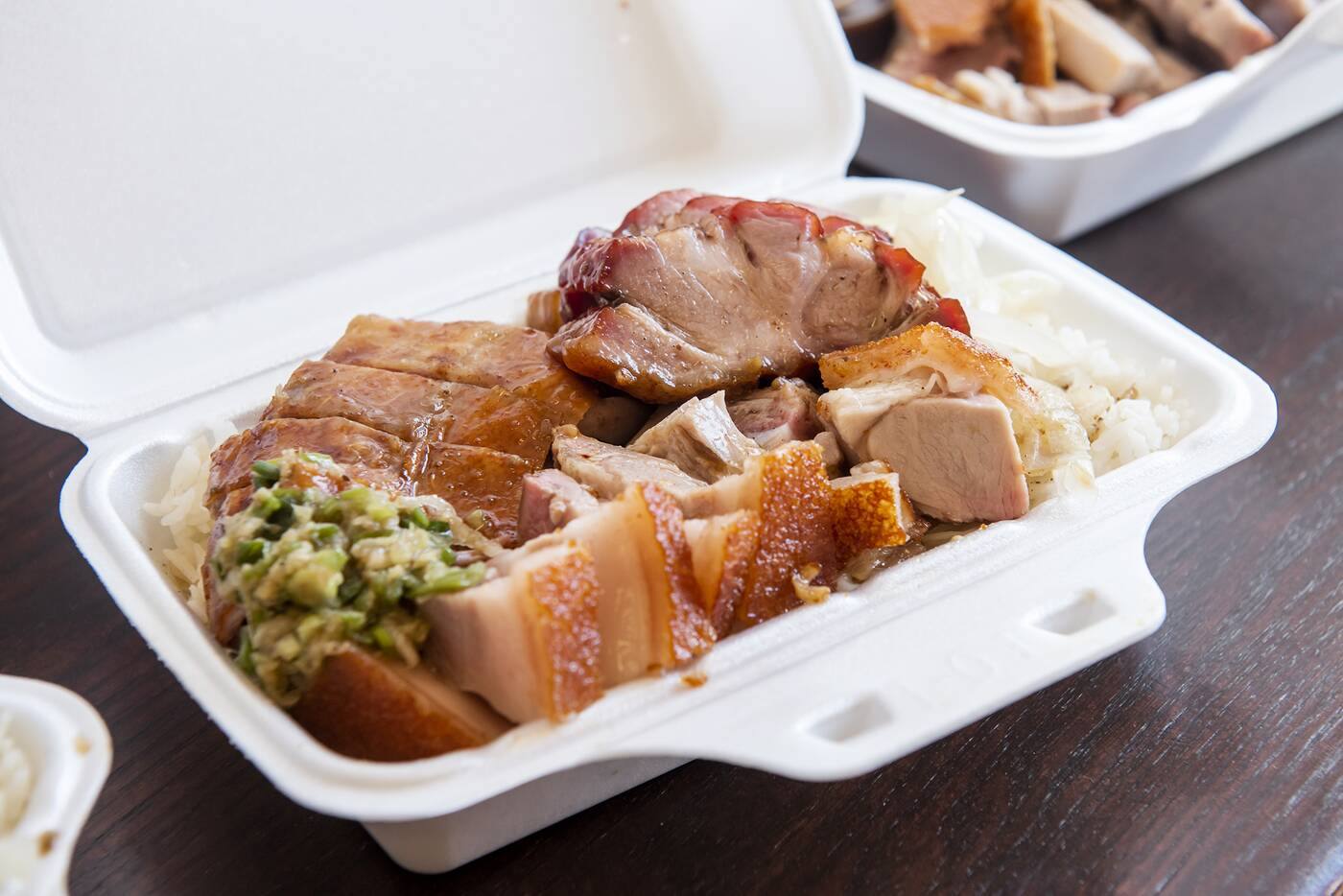 It's all about Chinese barbecue at East Court & Mike's BBQ. Photo by Hector Vasquez.

Get a taste for authentic Greek pastries when you visit this spot on Pape Ave. They'll be open from 6 a.m. to 5 p.m.

The Metropolitan Hotel's Chinese restaurant will be open to serve from 11:30 a.m. to 10 p.m.

This restaurant on Wilson Ave. in North York does Turkish breakfasts as well as kebabs and mezze. You'll be able to get your hands on some from 11 a.m. to 10 p.m.

From 11 a.m. to 10 p.m, you'll be able to secure takeout from this Indian and Nepalese restaurant on the Danforth.

All four locations of this popular Israeli brunch spot will be open for business on December 25. They'll be serving up their menu of shakshuka, farmers breakfasts, and tasty desserts.

Pad Thai, pad kraprow and pla pae sa are just some of the Thai dishes available for lunch and dinner at this restaurant on Church. They'll be open from noon until 11 p.m.

The popular Chinatown restaurant will be open from 11 a.m. to 9 p.m. to help you satifsy all your Chinese food cravings.

If you find yourself with a hankering for a fried chicken sandwich on Christmas Day you'll be delighted to know this Little Italy sandwich shop will be open from noon until 11 p.m.

The popular pho joint on Ossington will be serving up piping hot bowls from 11:30 a.m. until 9 p.m. on Christmas Day.

From 11 a.m. to 10 p.m. you can grab takeout and delivery from this restaurant serving Middle Eastern fare on the Danforth. 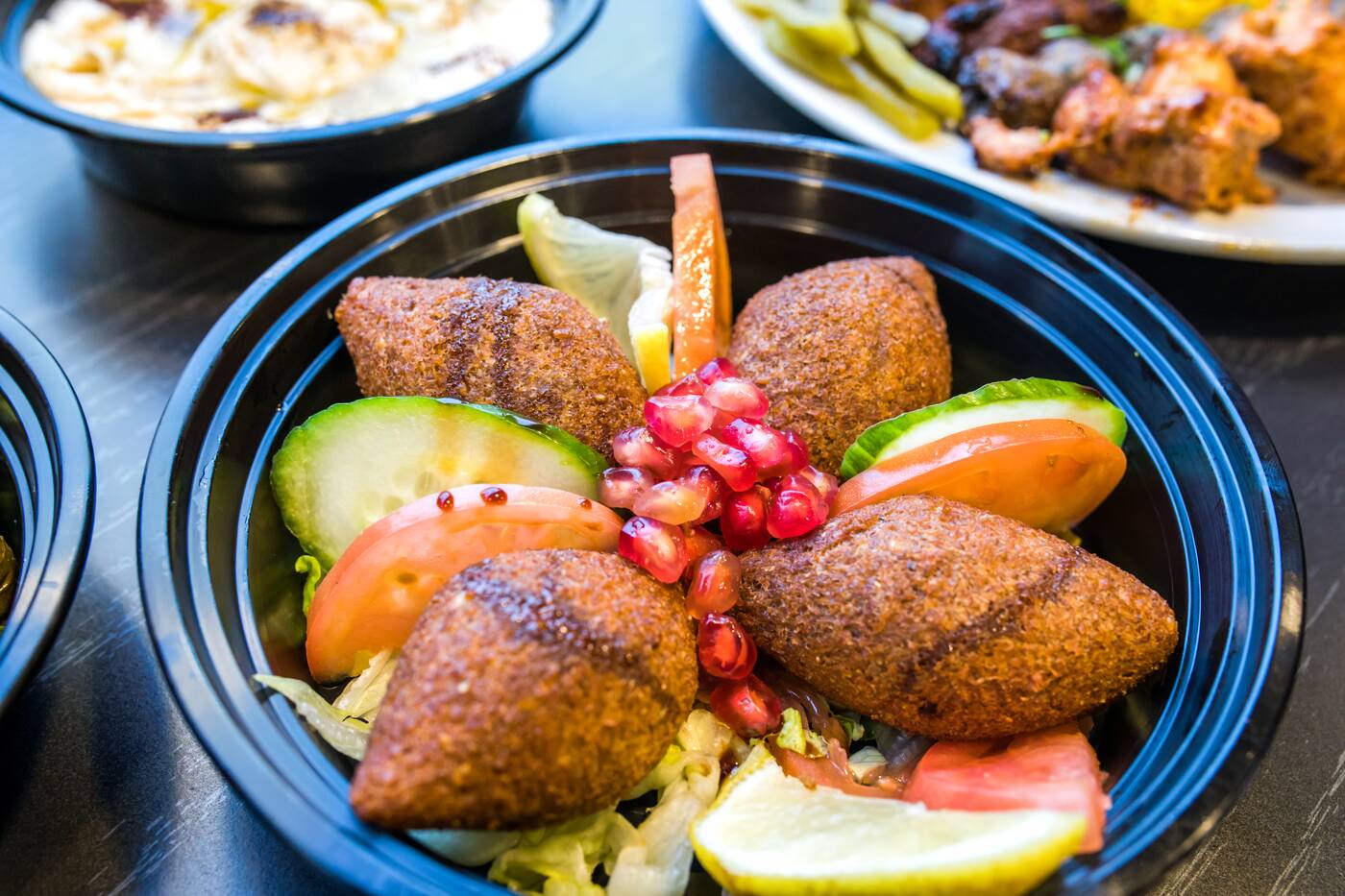 Don't pass up the chance to try the Kibbeh at Mishwar. Photo by Fareen Karim.

The diner on Dundas West won't be closing its doors for the holidays. Feel free to grabs some eats between 10 a.m. and midnight.

Every location expect for their one on Major Mackenzie will be open for regular hours making it a reliable choice for Korean eats on the holiday.

If you're trying to hunt down a tasty burger come December 25 head on over to any one of the locations of this Halal burger chain.

Get your fill of dim sum in Chinatown starting as early as 10 a.m. Fill up on deep fried shrimp rolls, sui mai and much more.

This Sichuan restaurant near Yonge & College is serving up spicy dishes and huge portions of chilli pepper-filled soups on Christmas Day from noon to 10 p.m.

The regular menu of eggs, omelettes, sandwiches and fish dinners will be available at this Jewish restaurant in North York between 8 a.m. and 3 p.m.

This restaurant will be just one of many open in Chinatown on Christmas Day. They'll be open from 11 a.m. until midnight.

Get your fill of Pakistani and Indian cuisine at this restaurant on Finch West. They are remaining open for their regular hours of noon to 11 p.m.

You'll be able to get your dumpling on at both their Chinatown and Yonge & Eglinton locations on Christmas Day. Each location will be open for regular hours. 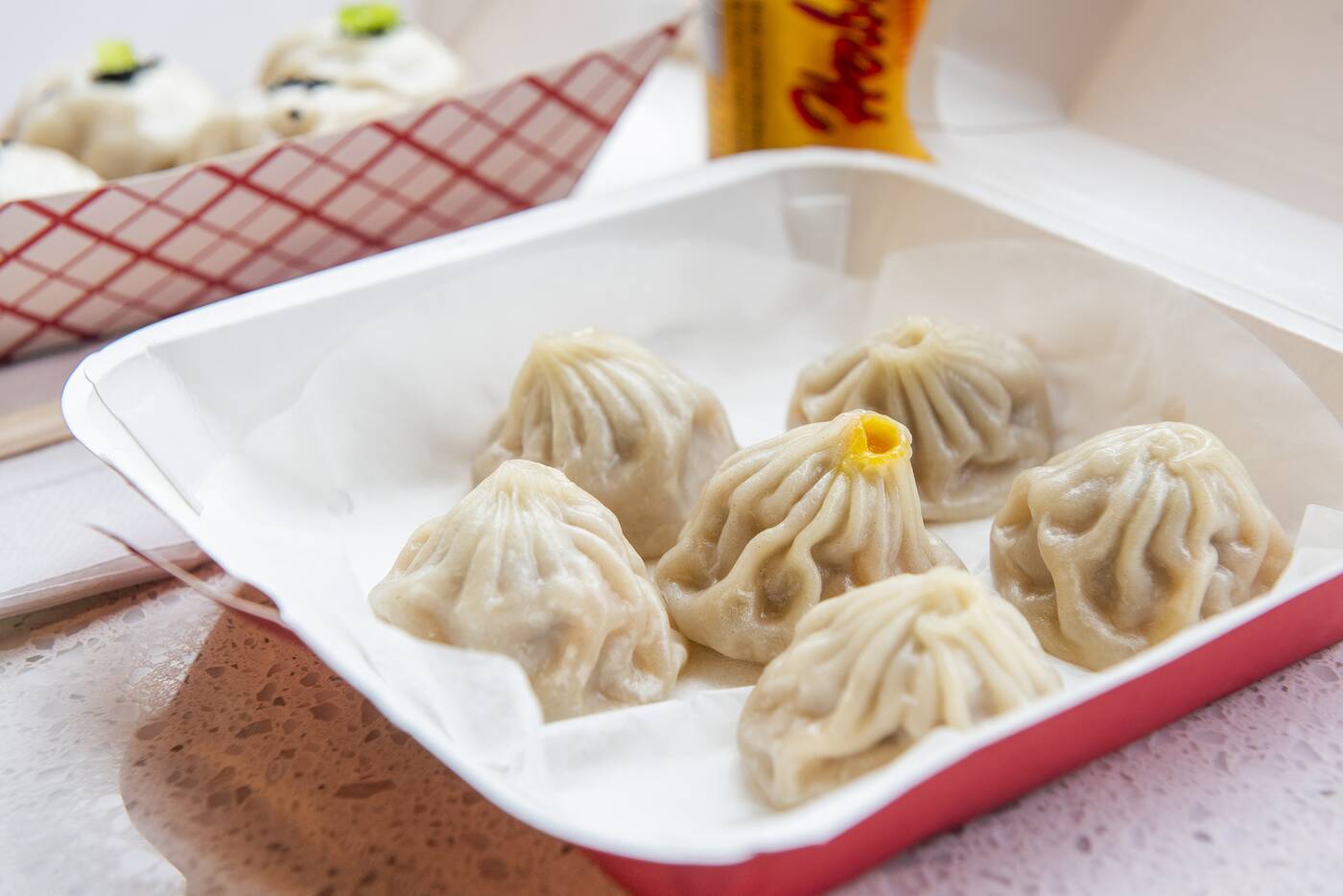 It doesn't matter what time you want to grab some grub as this Chinatown restaurant is serving up their dim sum 24 hours a day.

From 11:30 a.m. until 9 p.m. this restaurant found in Little India will be churning out giant dosa filled with a spiced potato stuffing, chana bhatura, and much more.

The restaurant known for their Western-inspired Asian dishes in the Entertainment District will be keeping their doors open for dinner from 3 p.m. to 10:45 p.m.

The restaurant inside the St. Regis will be open for takeaway orders from 10 a.m. until 10 p.m.

Both their College and Victoria locations will be open for business. Load up on all your favourite diner staples.

Chinatown is bustling with establishments open on Christmas Day including this one on Dundas. Head over anytime between 10 a.m. to midnight.

The restaurant for Taiwanese cuisine has locations in downtown Toronto, Markham and Scarborough and all three will be open for business on Christmas Day.

Four locations of this ramen chain will be open on December. Their original location on Baldwin, Church, High Park and Commerce Gate will be operating their regular hours.

The fried chicken spot in Kensington Market will be operating from 11 a.m. until 11 p.m. 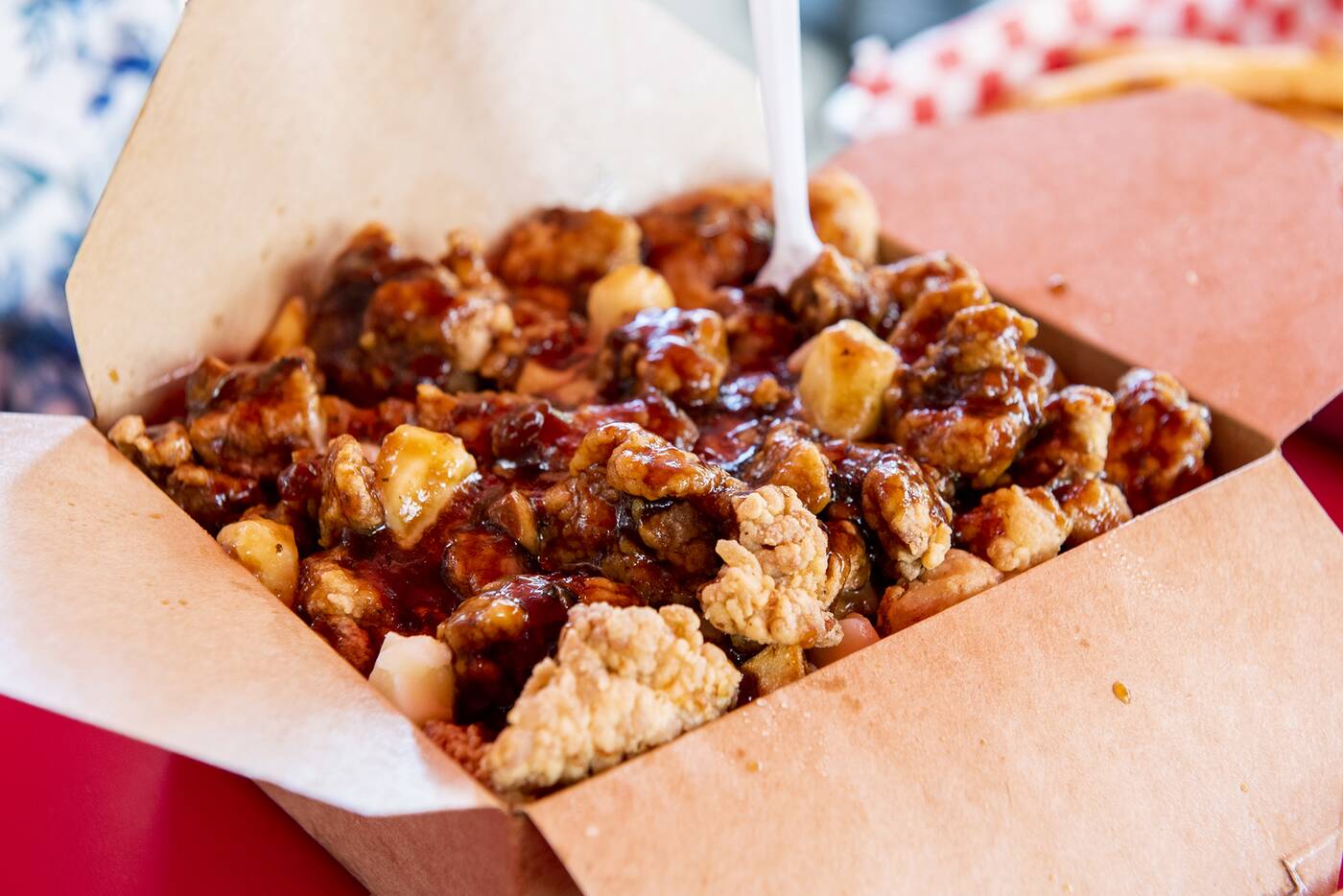 The Chinese restaurant found in Little Toyko will be dishing out general tao chicken from 11 a.m. until 10 p.m.

The Moss Park restaurant with a menu of Indian-meets-Western eats will remain open for the day from noon until 3 a.m.

The North York, Koreatown and Yonge & Wellesley locations of this Korean-style corn dog chain will be open from 11:30 a.m. to 11 p.m. come Christmas Day.

Take your Christmas Day up a notch with the high level burgers coming out of this Kensington Market joint. They will be from 11 a.m. to 10 p.m.

This Chinatown restaurant serves up some of the best wonton soup in the city and you'll be able to grab some from 9 a.m. until 9 p.m. on December 25.

Locations of this Middle Eastern chain serving shawarma, kebabs, and saj bread wraps will be open for Christmas.

The Chinese food restaurant boasts many locations across the city and lucky for you they'll all be open December 25 from 10:30 a.m. until midnight.

The Leslieville spot will be serving up Turkish bagels and tea from 8:30 a.m. until 4 p.m.

Both their regular menu and a special menu will be available on December 25 at this Etobicoke restaurant. They open at 11 a.m.

Both their Yonge and King locations will remain open for the day. This will help you satisfy cravings for dumplings and bao.