Chung Chun is the first ever Canadian outpost of the massive Korean chain specializing in one thing: sticky rice corn dogs.

This cramped boite on Byng takes breaded hot dogs on a stick—a North American carnival classic—to the next level, meaning skewered sausages like you've never had before. 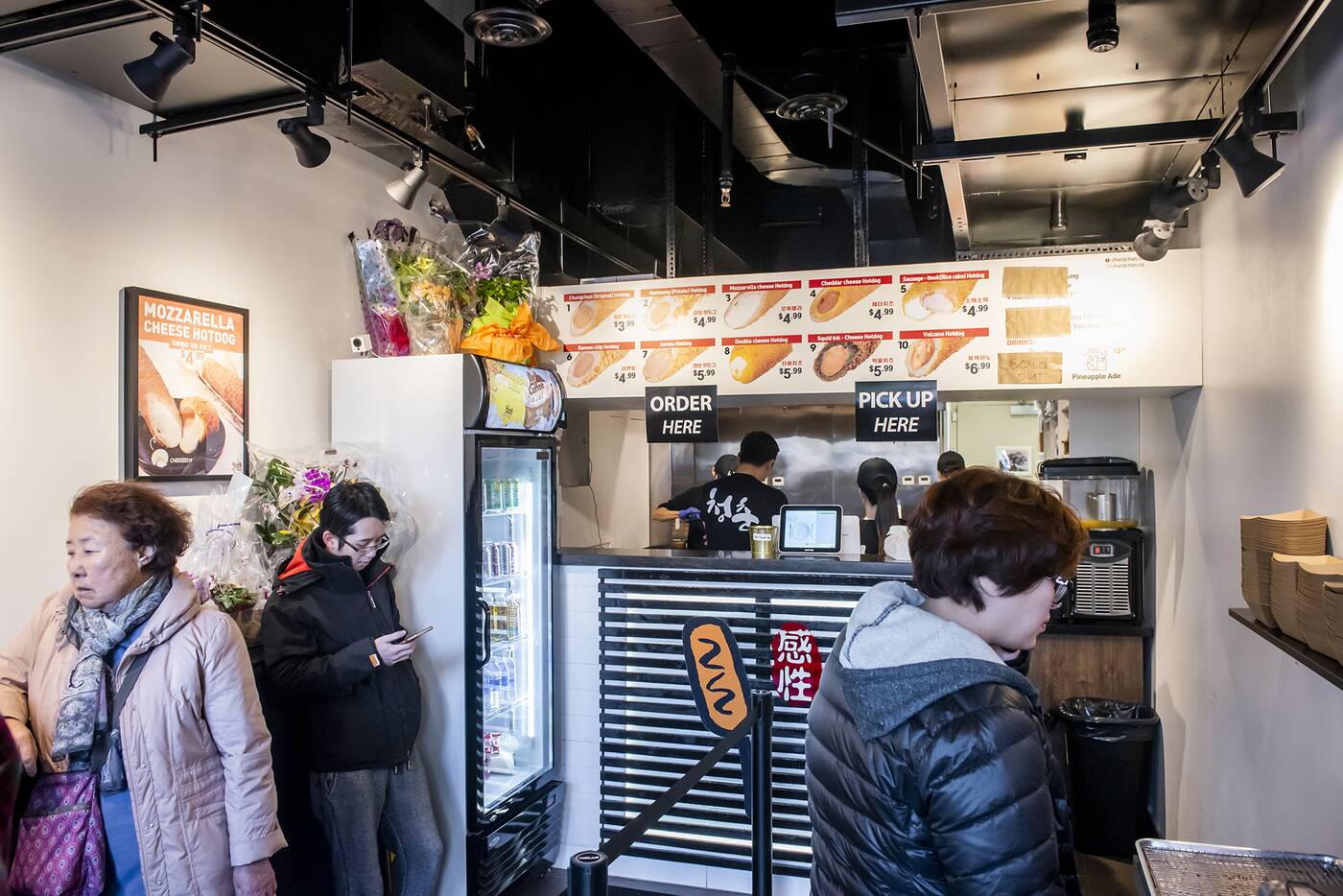 Chung Chun already has more than a hundred locations worldwide, but it's the first of its kind in the city, transplanting a South Korean street food trend that's been on the rise for the last decade. 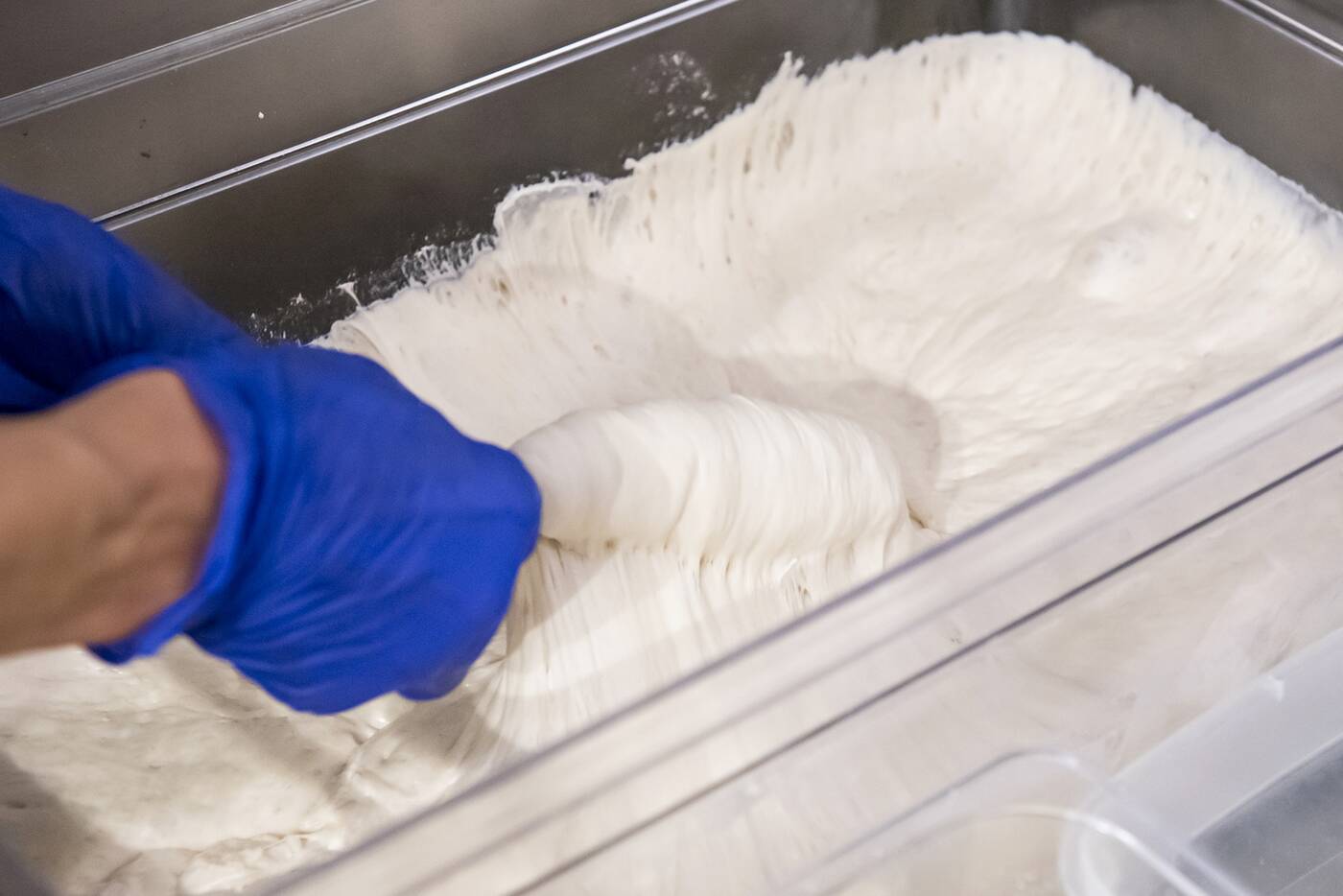 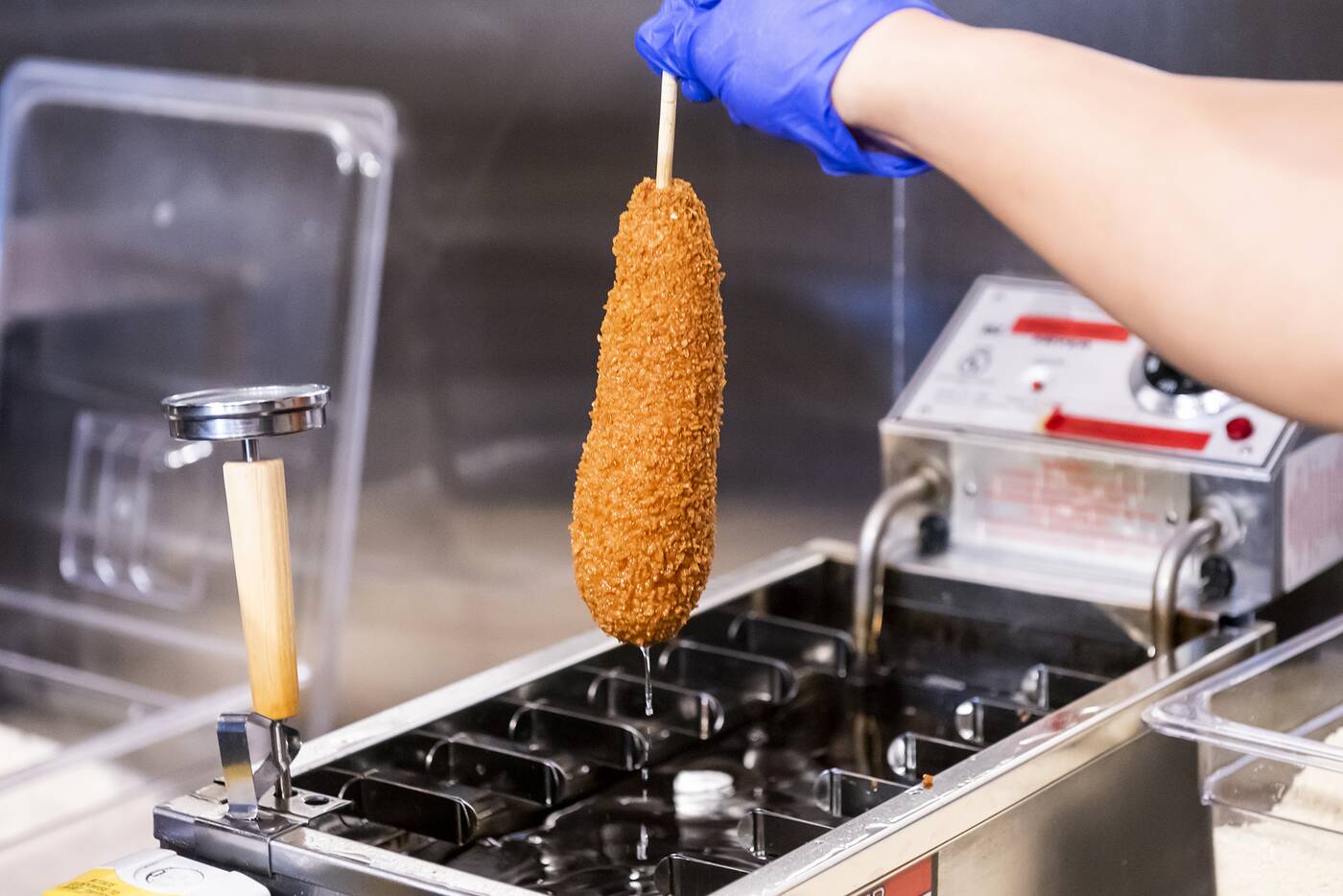 What makes these corn dogs different is that the traditional batter is replaced with a flour made from glutinous rice. The batter is so sticky, it needs to be cut off the stick before a layer of panko crumbs. 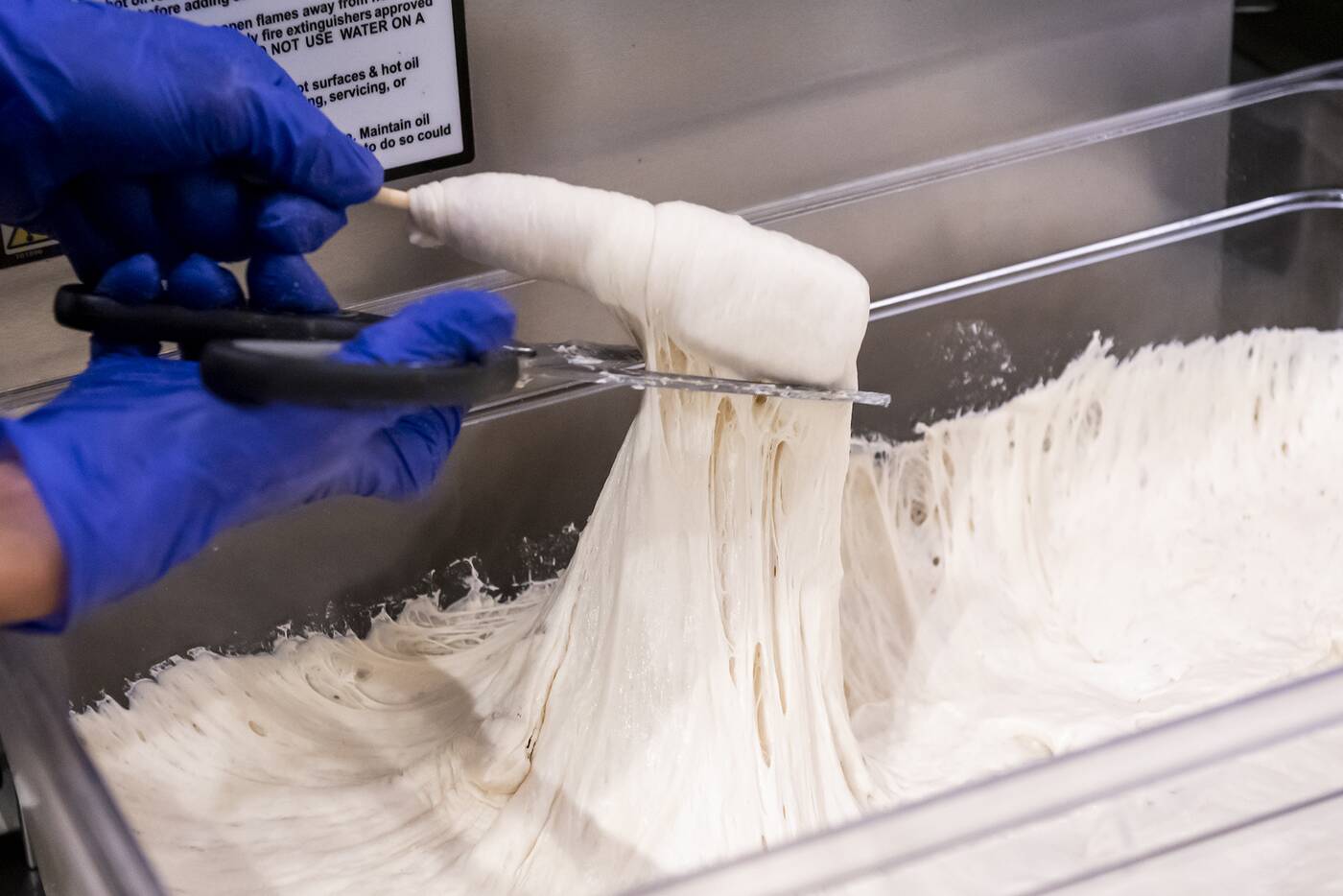 The stickiness isn't reflected in the end result, though: after about four minutes of deep-frying, these dogs —which are huge, by the way— they end up as sausages wrapped in deliciously soft dough. 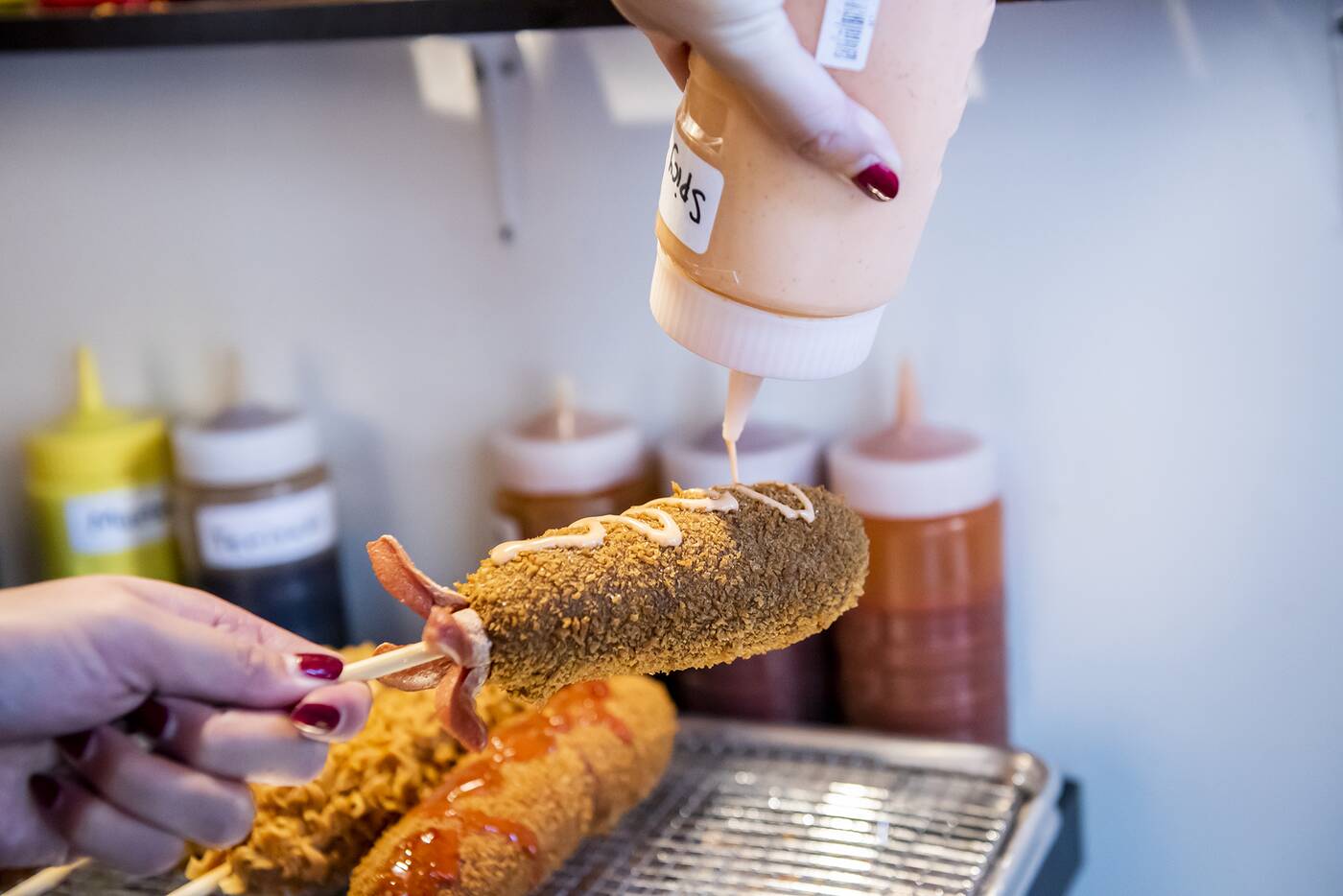 Every corn dog is fried to order. When it's ready, you can head to the condiment station, where you can deck out your stick with an array of sauces like ketchup, mustard, sweet chilli, teriyaki, or spicy mayo. 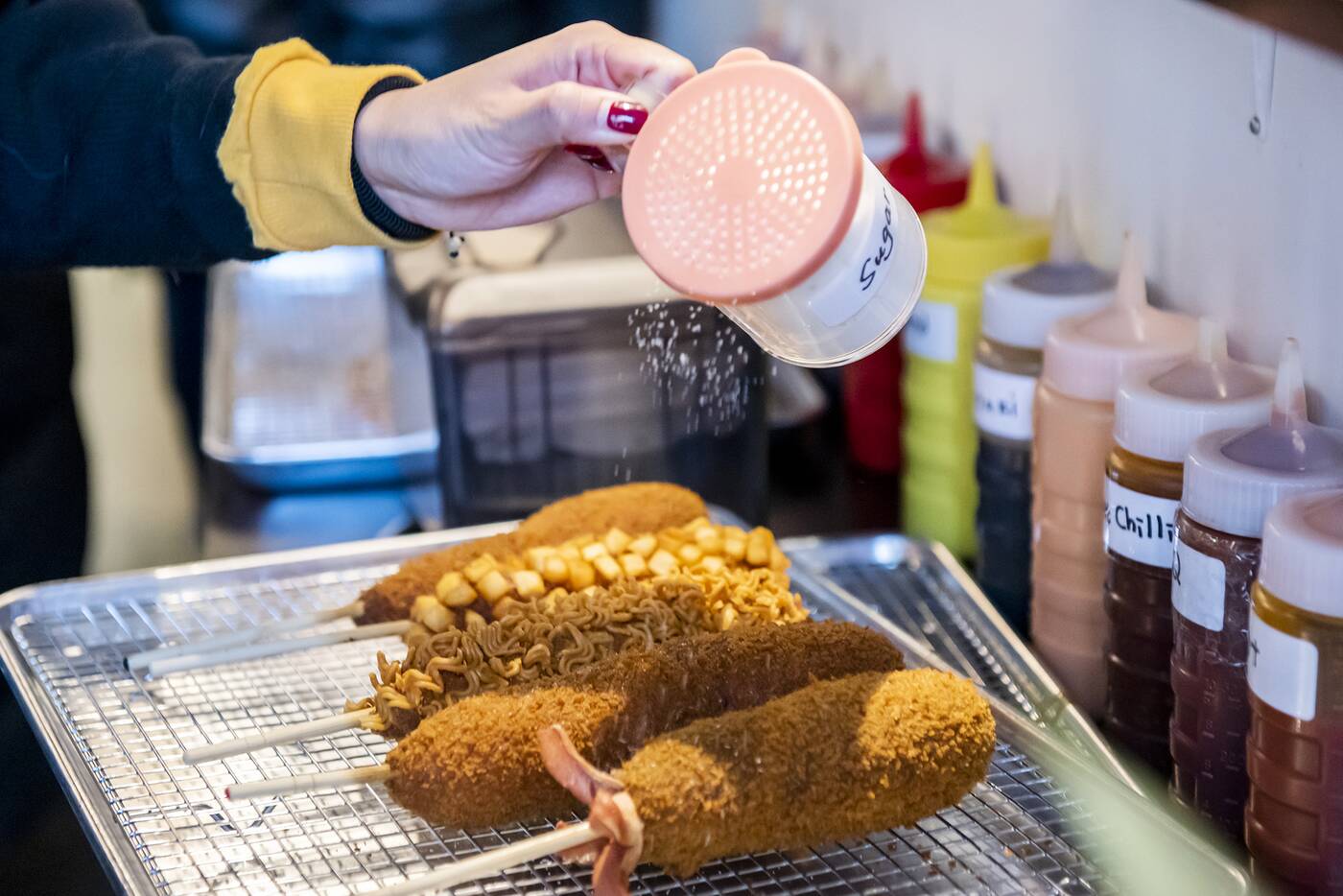 There's a bunch of cheese powders too, but I'm told a sprinkling of sugar before adding your sauce is the most traditional way to eat any of the corn dogs. 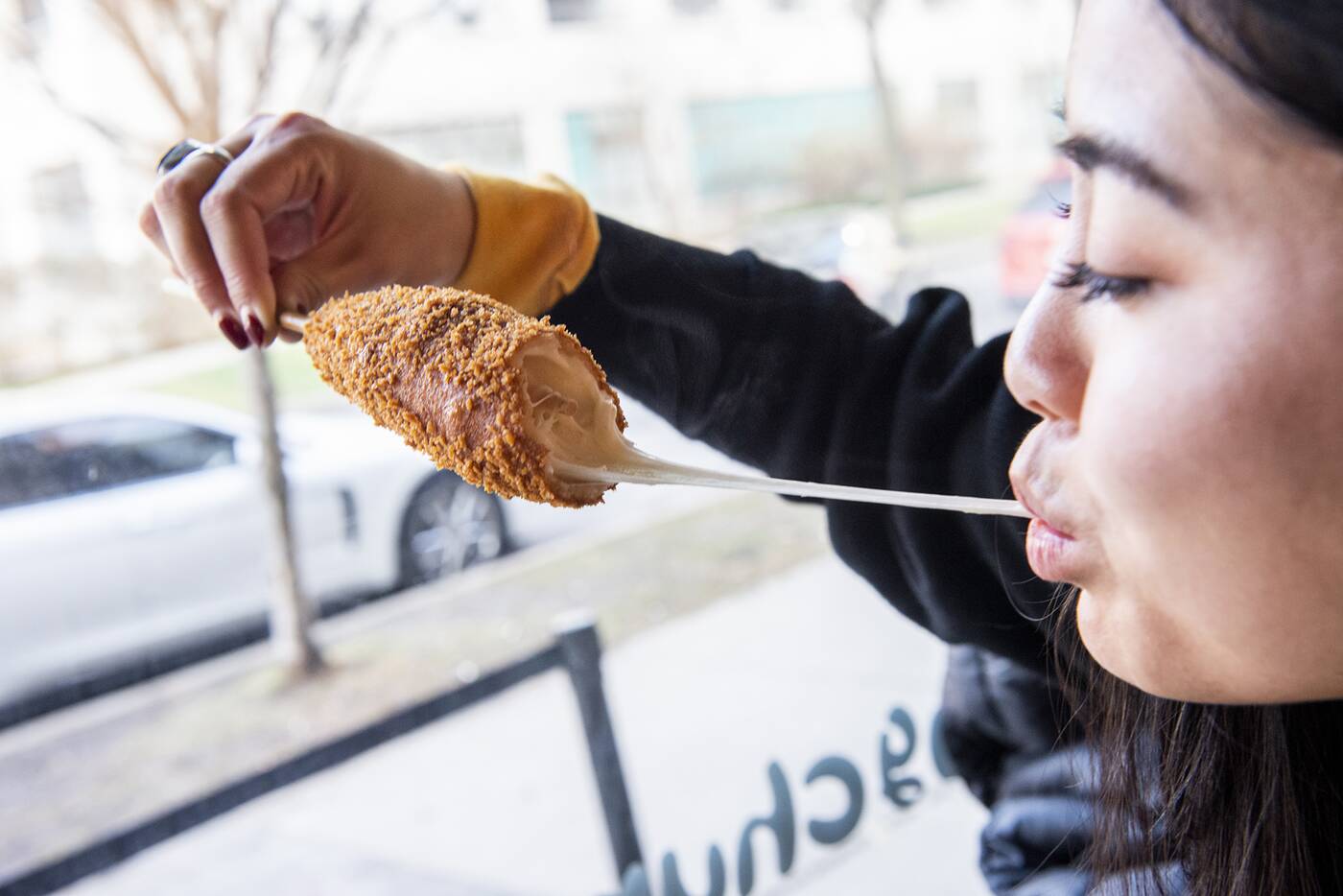 Eat the mozzarella cheese corn dog ($4.99) fresh out of the fryer for that extra stringy effect. 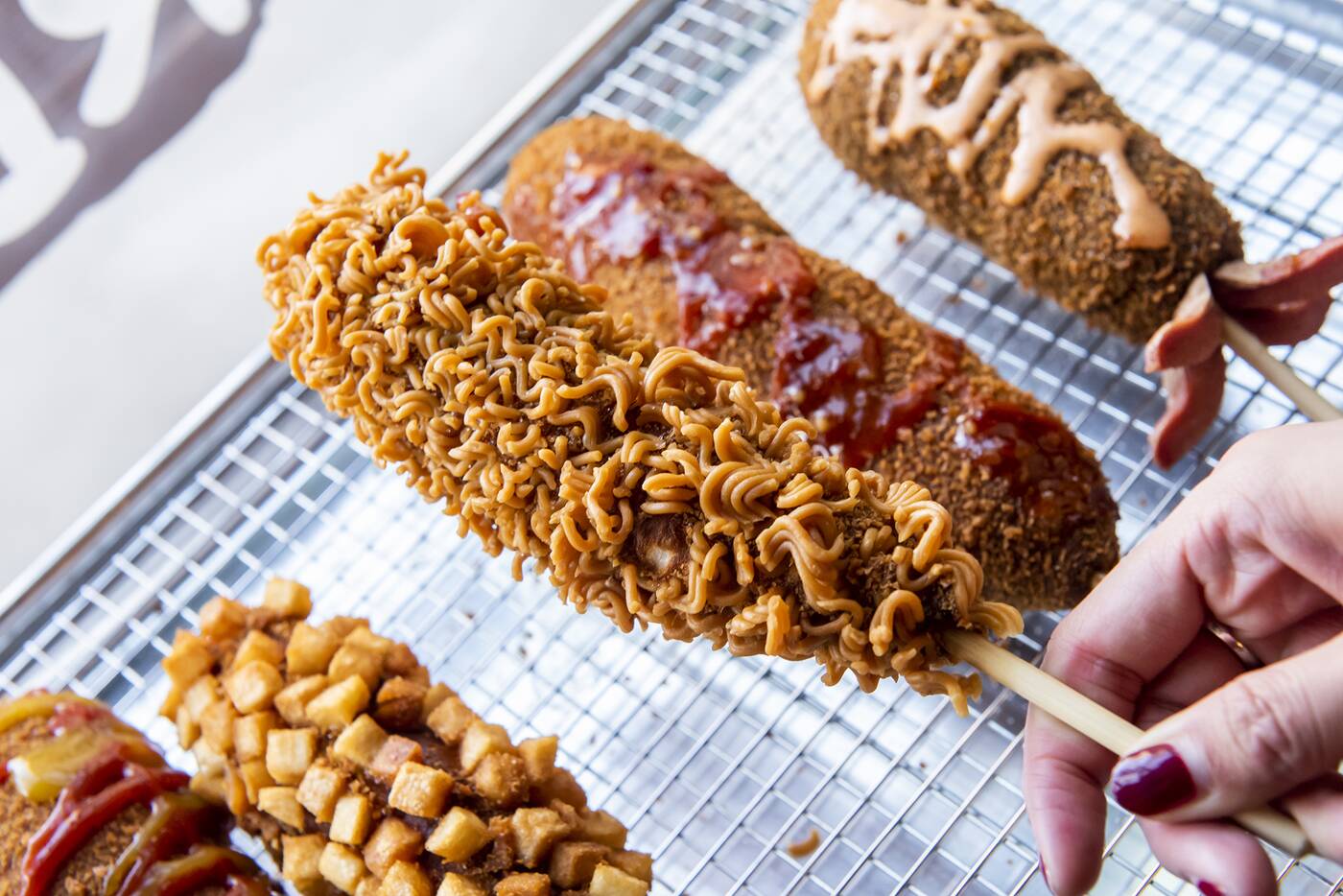 If you're the kind of weirdo that likes to pick at uncooked instant noodles, the ramen chip dog ($4.99) satisfies that craving, but without the health risks of eating raw MSG-covered noodles. 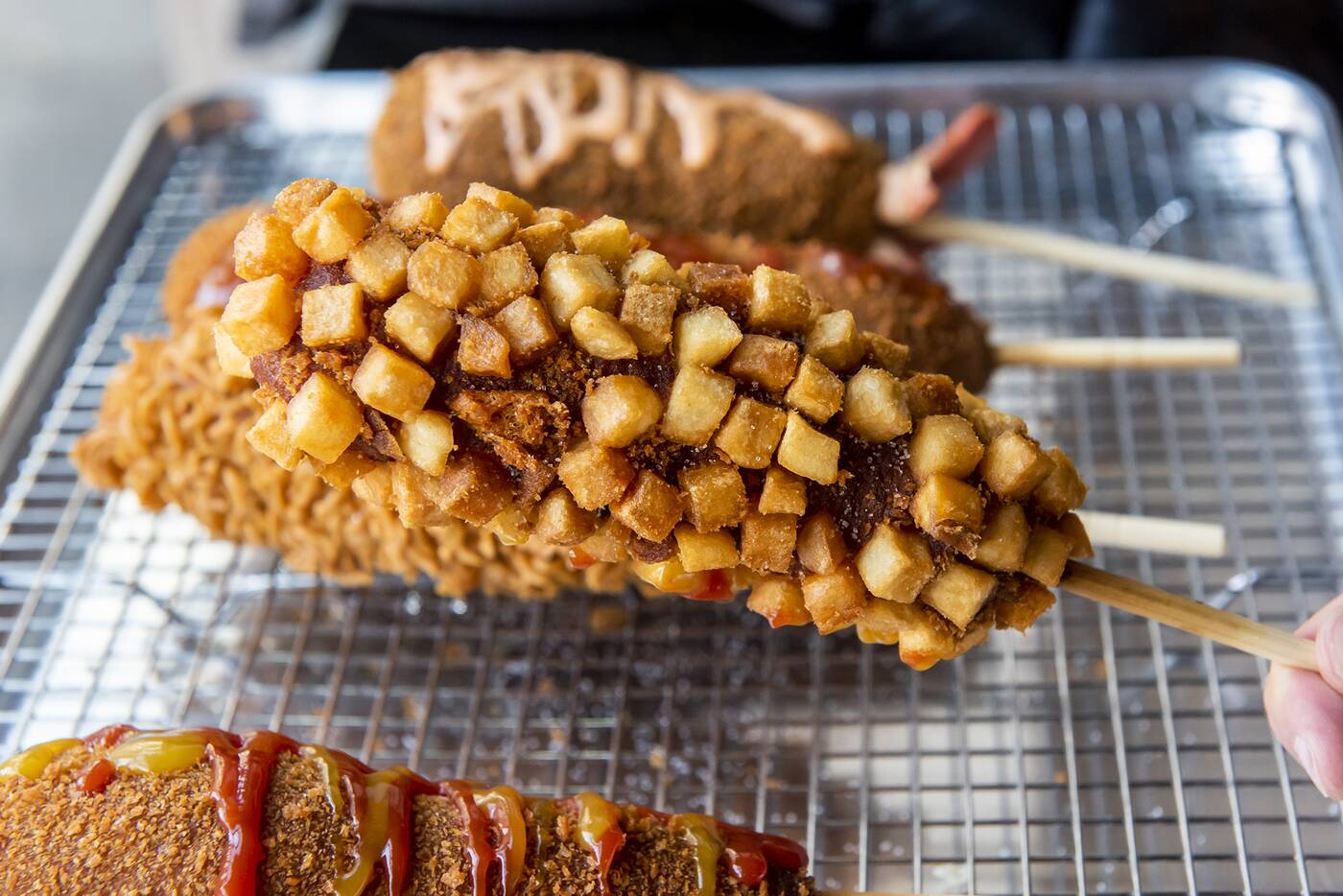 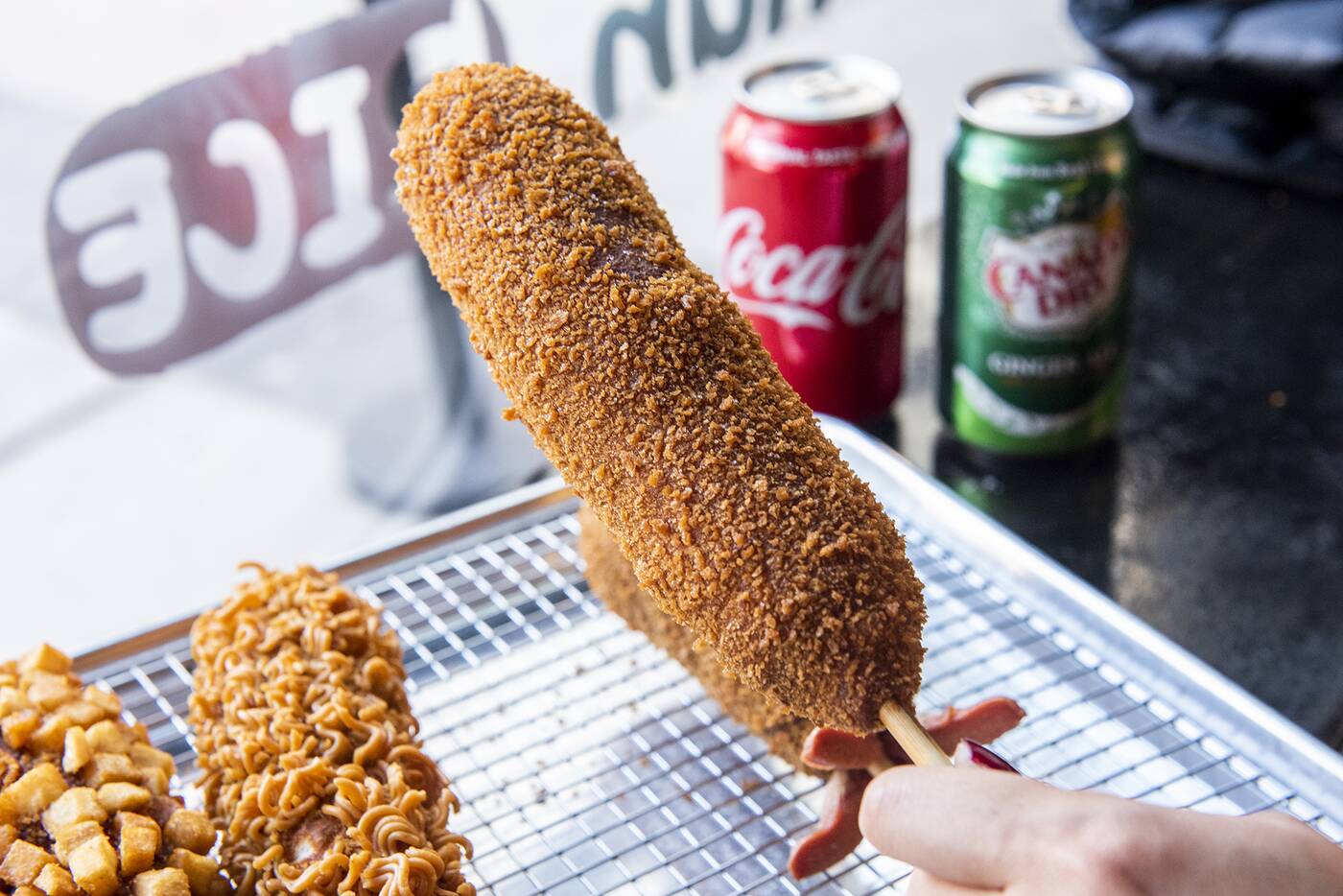 My personal favourite is the squid ink and cheese corn dog ($5.99), mainly because there's nothing on top to distract from the pillowy sticky rice batter. 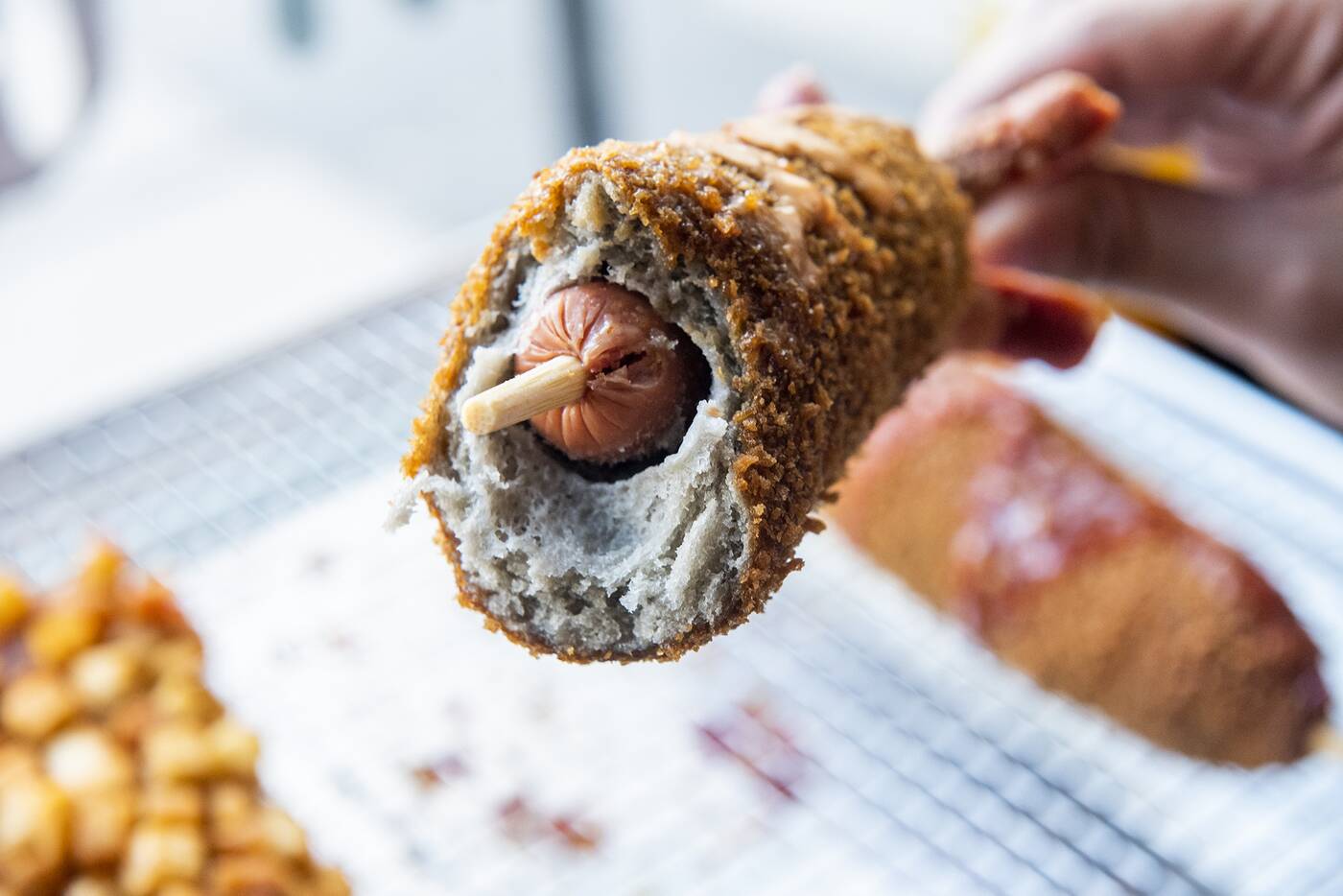 You won't get much squid ink flavour, but the black colour is intact, and the sausage is cut to have a cute, tentacled shape. 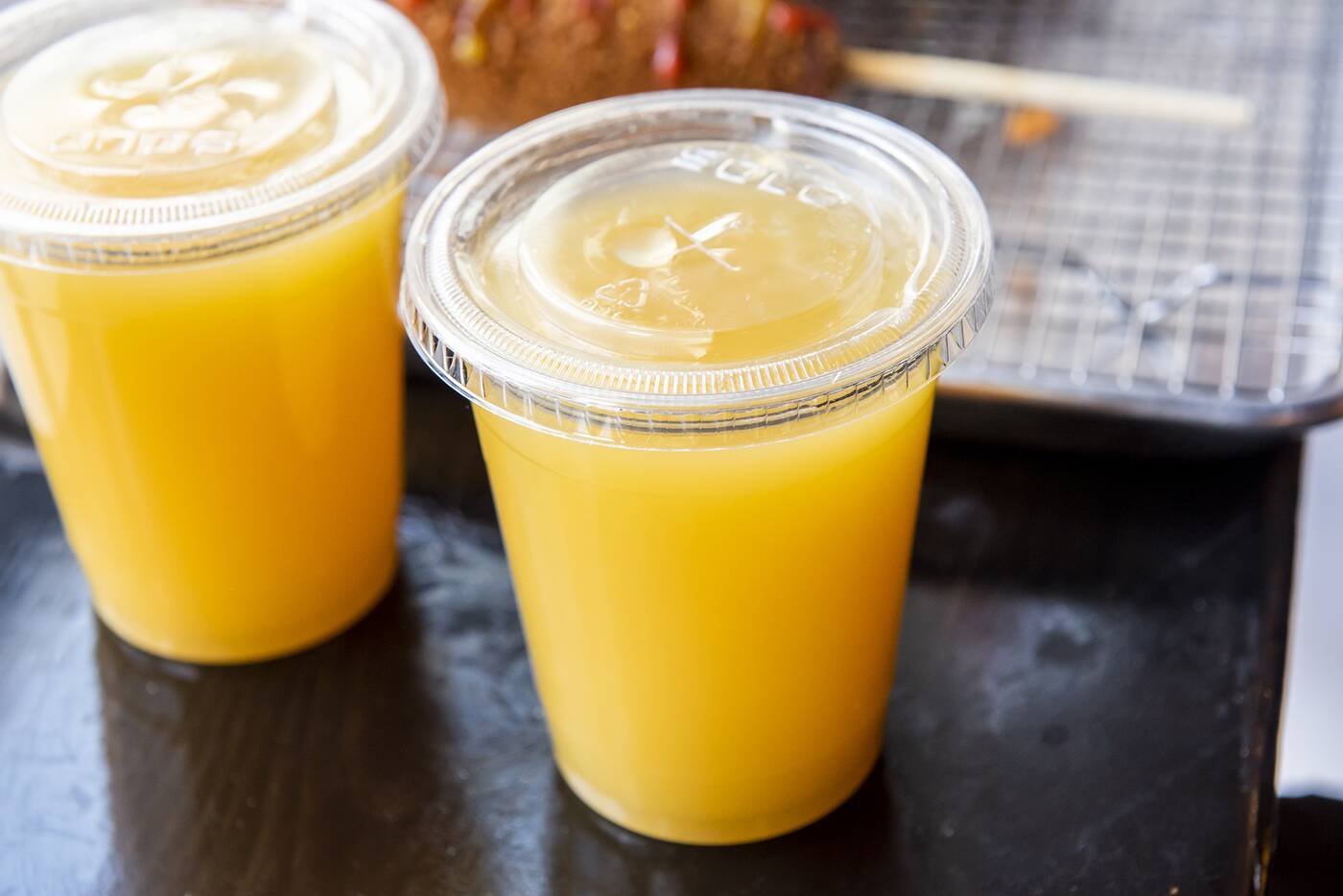 The volcano sausage ($3.99) is described as a "powerful" hot dog made with spicy sausage, but doesn't have much of a kick. If you're sensitive to any kind of heat, though, it might help to order a cup of "pineapple-ade" ($3.49). 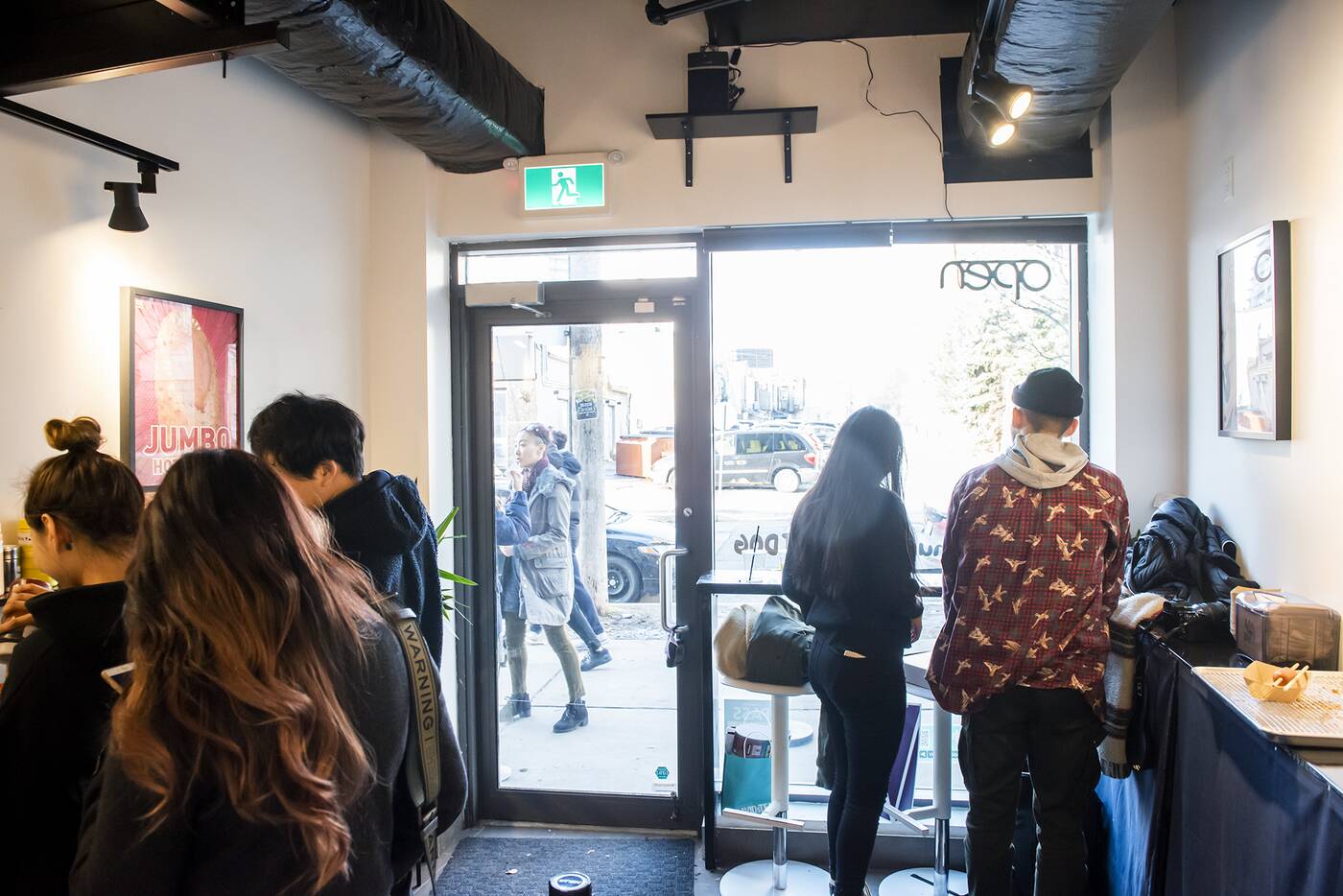 One hot dog from Chung Chun should be more than enough to satisfy your deep-fried snack cravings, but it may be hard to resist all the different types in one go. 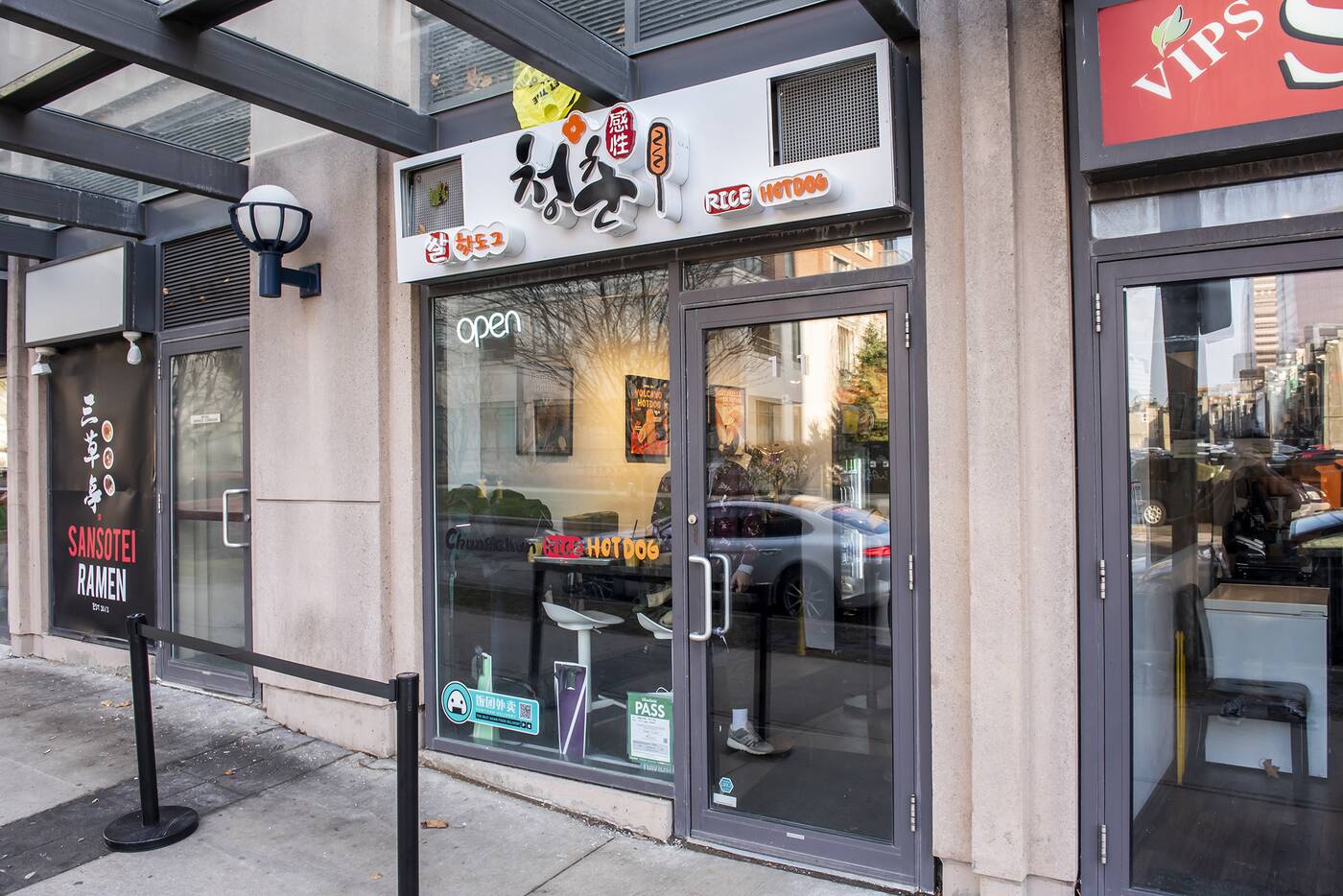