Louix Louis can be found on the 31st floor of the St. Regis hotel in the Financial District. As its name implies, this restaurant and bar has both French and American influences.

Inspired by the grand hotel bars of Paris and New York, it hearkens back to the glamorous gathering places for high society at the turn of the 20th Century.

In a former life, this was the infamous America restaurant, but since the St. Regis brand has taken over the building, it has partnered with Icon Legacy Hospitality to transform the 130-seat space into a gilded haven with design help from DesignAgency. 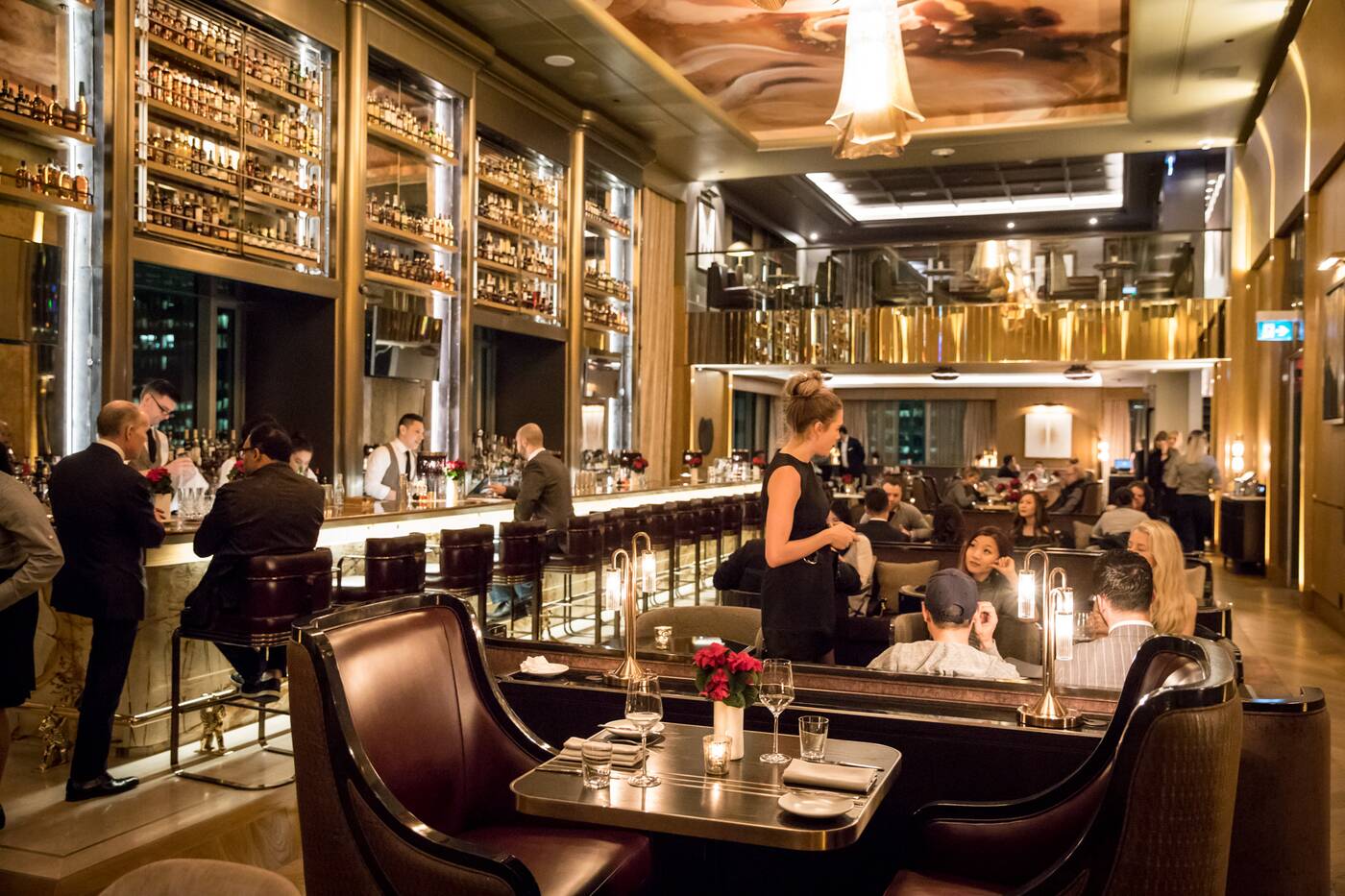 A dramatic 30-foot-long bar backed by shelves filled high with liquor is the first thing patrons see as they enter. A secret garden terrace can be found behind it in warmer weather.

The ceiling features a mural painted by artist Madison van Rijn that evokes the bottom of a swirling glass of whisky, a nod to Toronto's previous history as having the largest distillery in the world. 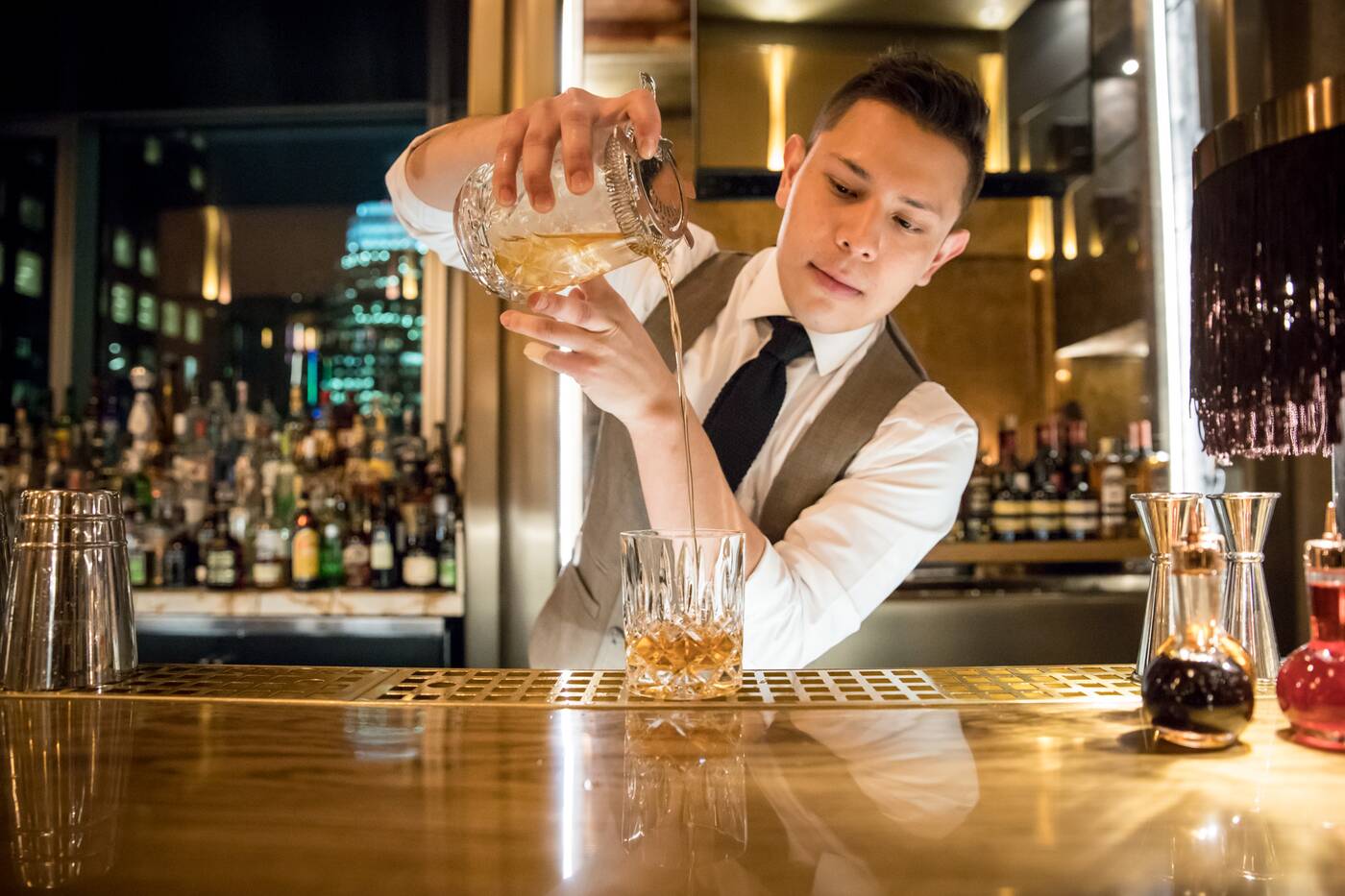 Naturally, the bar celebrates this dark spirit, with literally hundreds of different bottles on offer, organized by country of origin on the menu.

The bar's cocktail selection offers "forgotten classics and lesser-known tipples," like the bourbon-based New York Sour ($18) and the Old Pal ($16), which features rye. 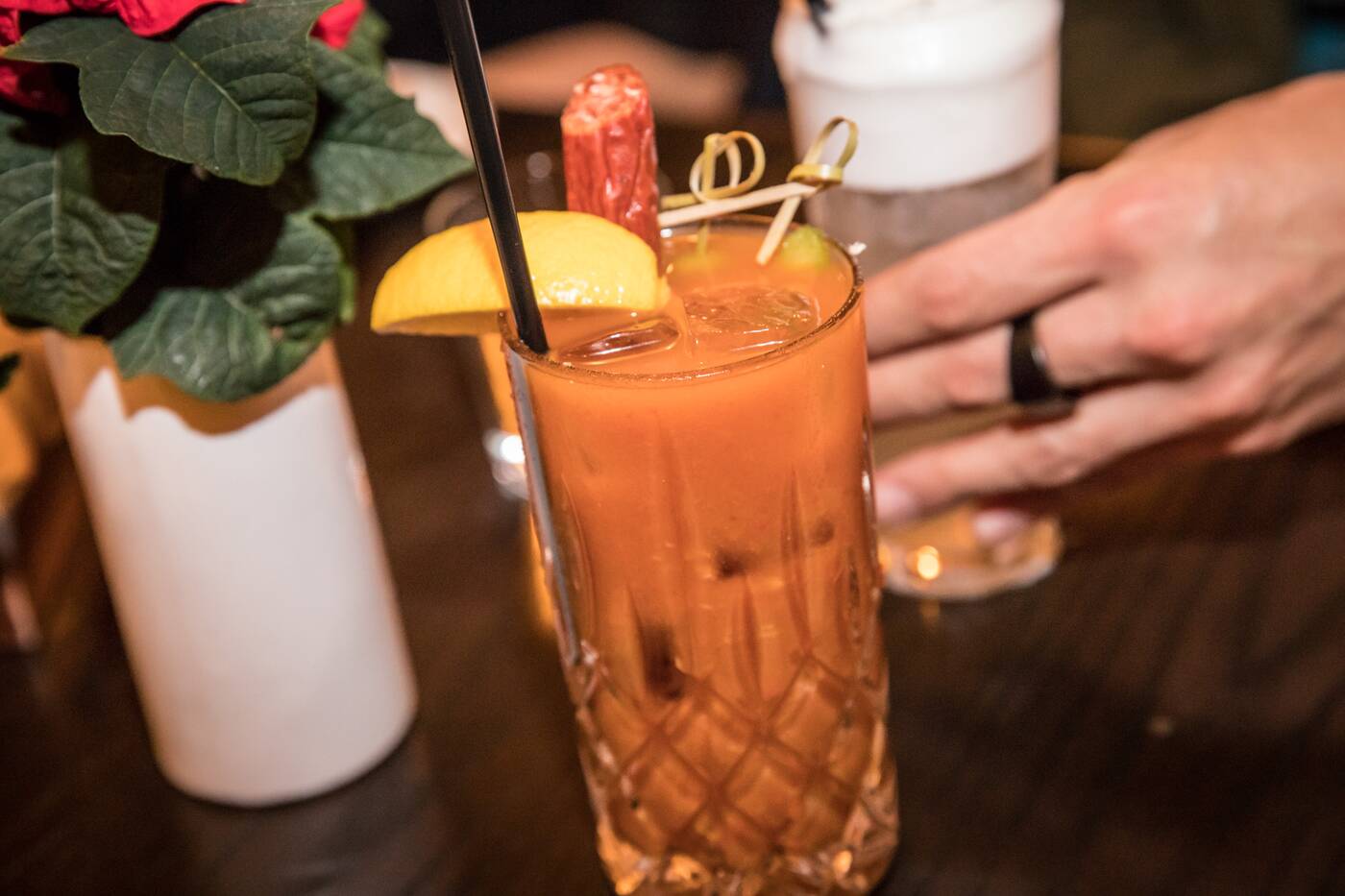 Another beverage that receives special attention is the Bloody Mary (the American version of the Caesar), since it was invented at the St. Regis New York's King Cole Bar in 1934. It's the hotel's signature cocktail, and a unique Rouge 140 ($18) version was created for Toronto.

Its name acknowledges the 140 different languages spoken in the city, and the vodka-based drink contains a mix of soy sauce, oven-roasted red pepper and tomato juice, chili and a house savoury spice blend, reflecting the multicultural flavours of the 6ix. 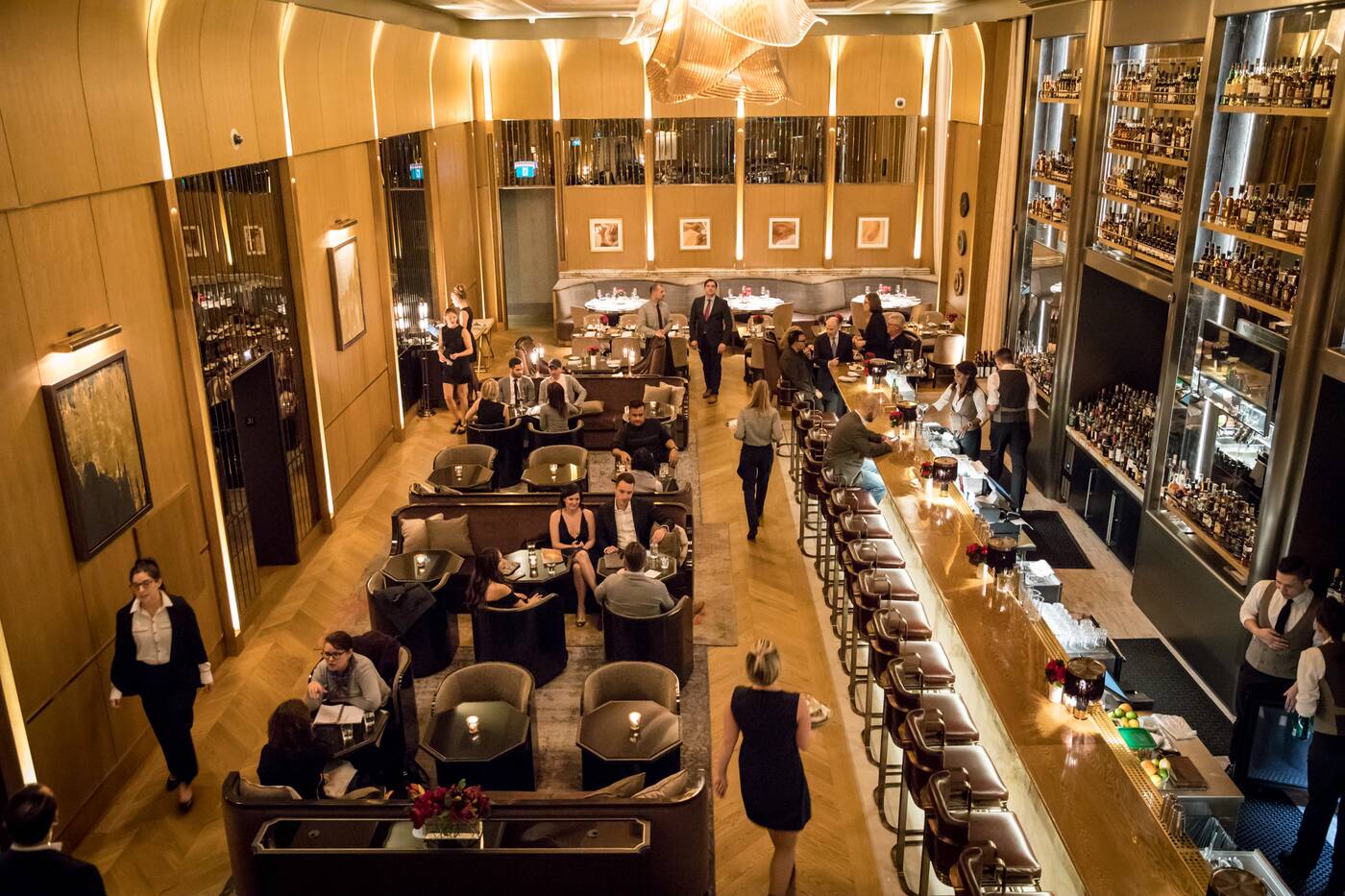 Executive Chef Guillaume Robin, a French chef who previously worked in the kitchen of a five-star hotel in the U.S., has created a dining menu combining contemporary American cuisine with classic French technique that’s approachable, yet accompanied by a touch of decadent indulgence. 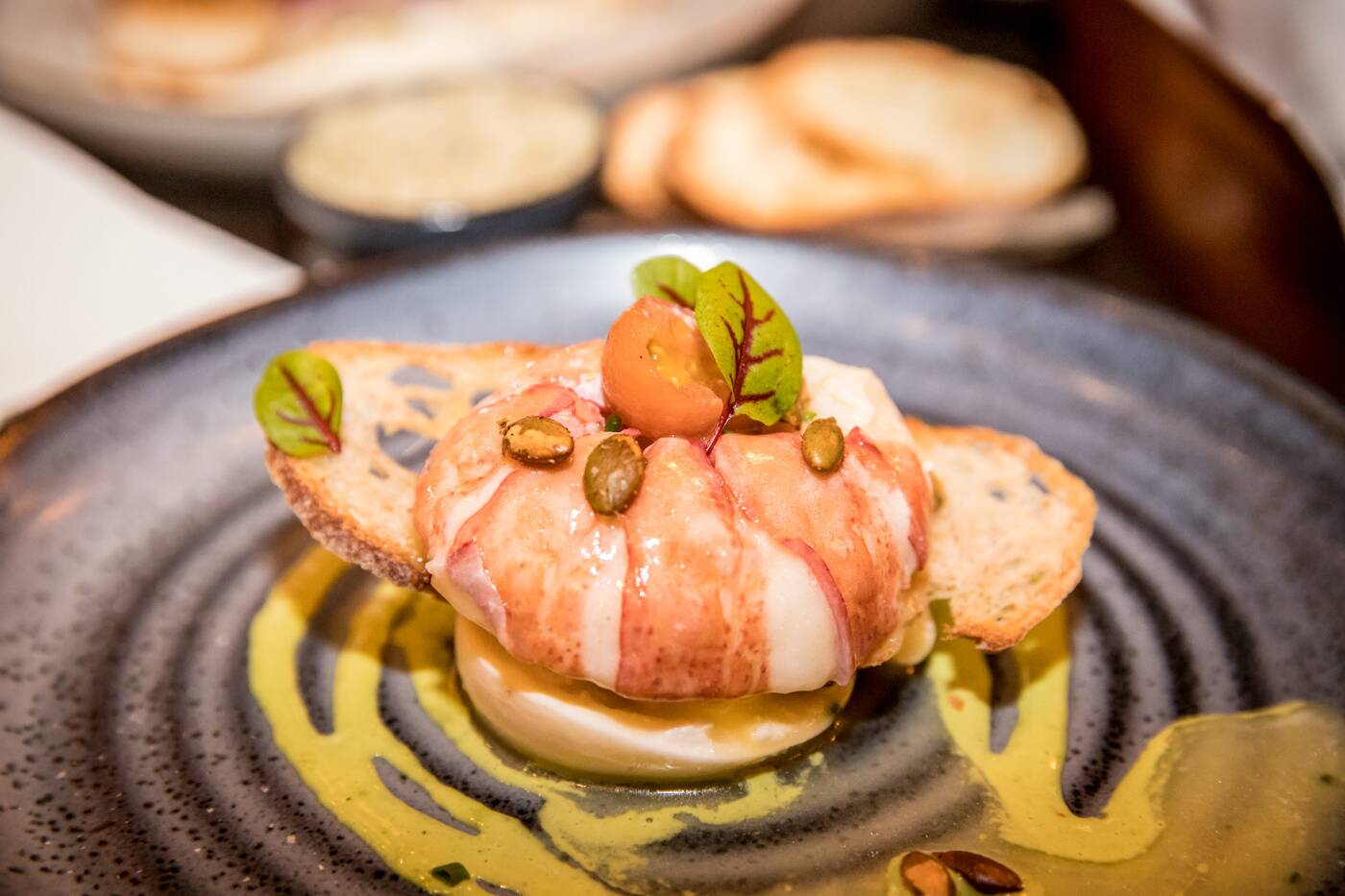 For dinner, high-roller starters include caviar, oysters and seafood platters, along with a few other cold and hot dishes. A notable cold one is Nova Scotia lobster atop Ontario burrata ($21) with green goddess dressing plus pickled tomato, spiced pumpkin seeds and whole-grain crostini. 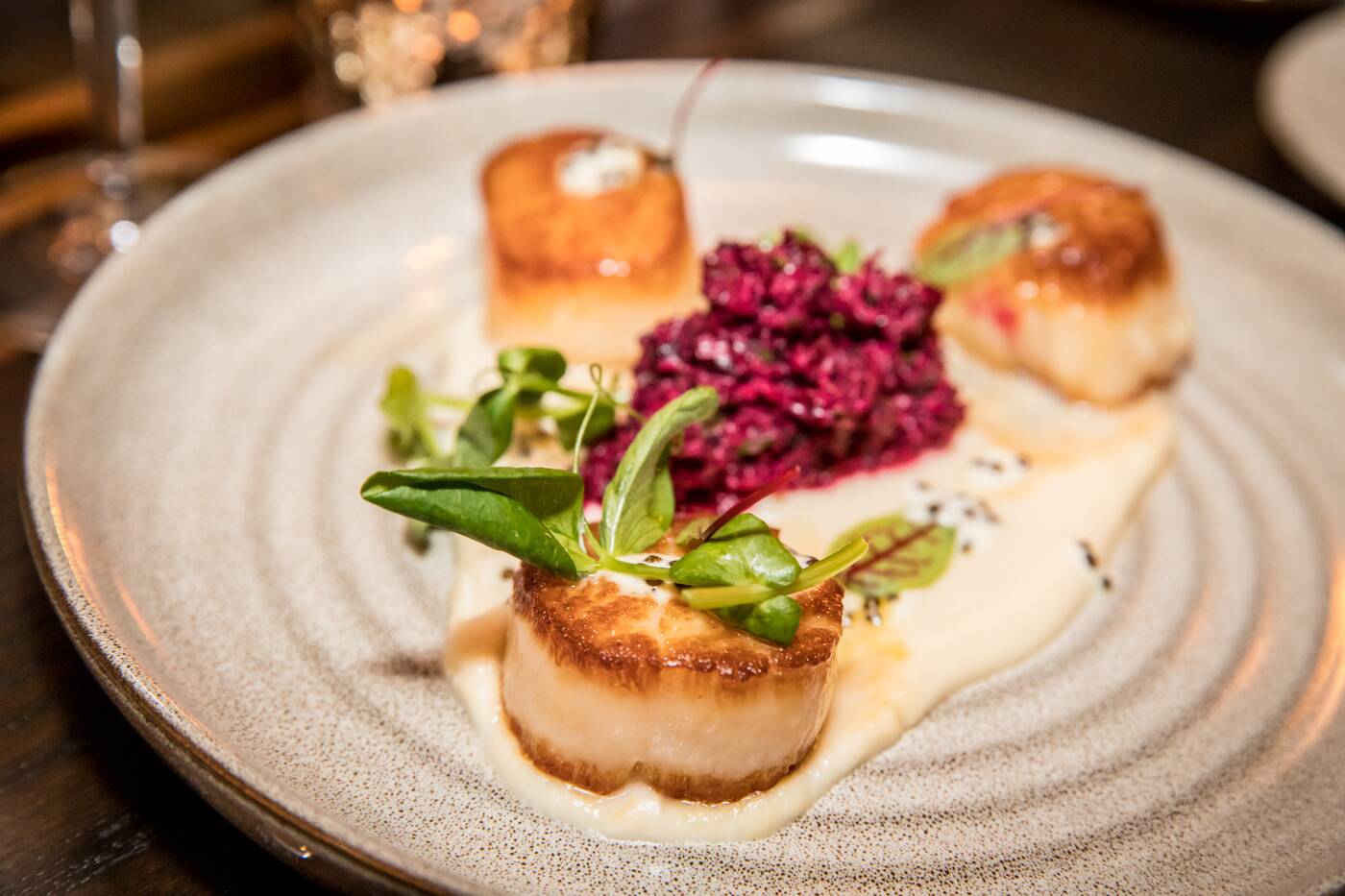 B.C. smoked scallops ($21) are a highlight from the hot appetizers. They're cold-smoked, then seared perfectly and served with cauliflower puree and beetroot tartare, along with dabs of caviar cream and watercress as garnish. 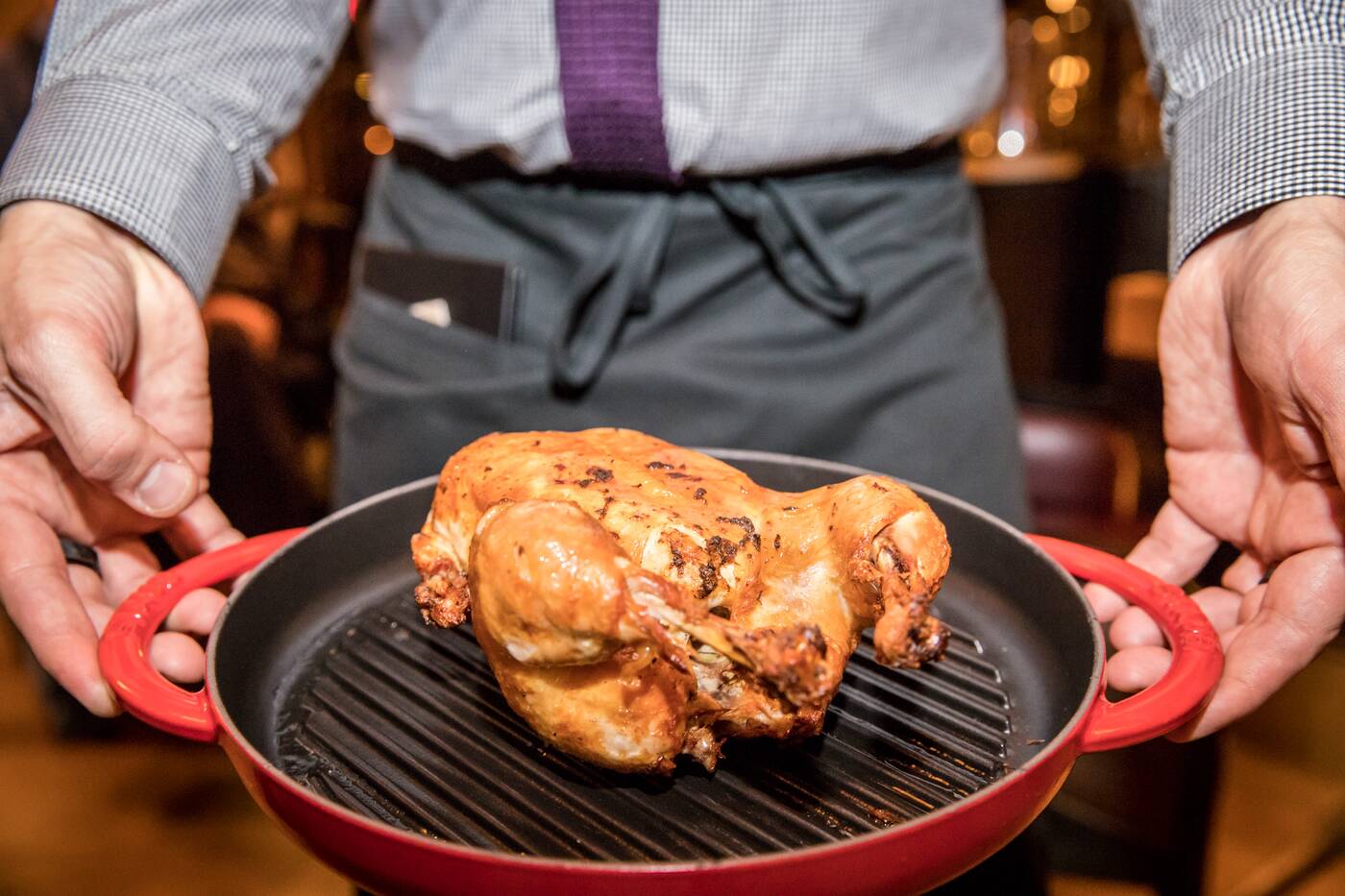 Whole truffle chicken for two ($75) is a showstopper of a main, with the chicken cooked sous-vide for six hours in truffle butter before it's presented to diners whole prior to being quartered. It's served with charred baby leeks, a truffle jus and Italian black truffle shavings. 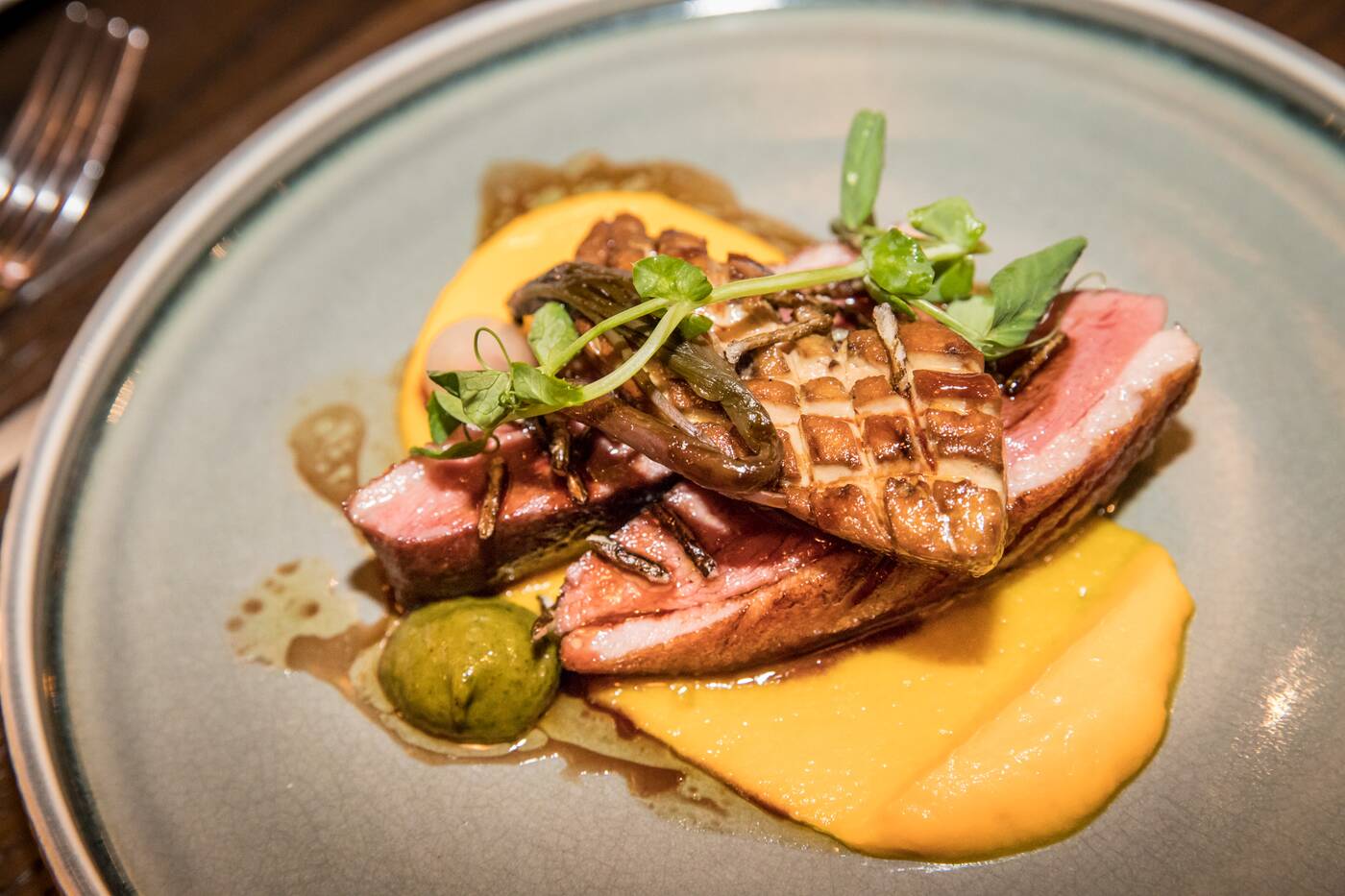 Another delicious main is the seared Quebec duck breast ($36) topped with foie gras, some pickled ramps and crispy wild rice over a pumpkin puree and some green tomatillo salsa.

The meat is moist and flavourful, which isn't always the case with duck, and the accompaniments add nice layers of acid and texture to create the right balance with the fat. 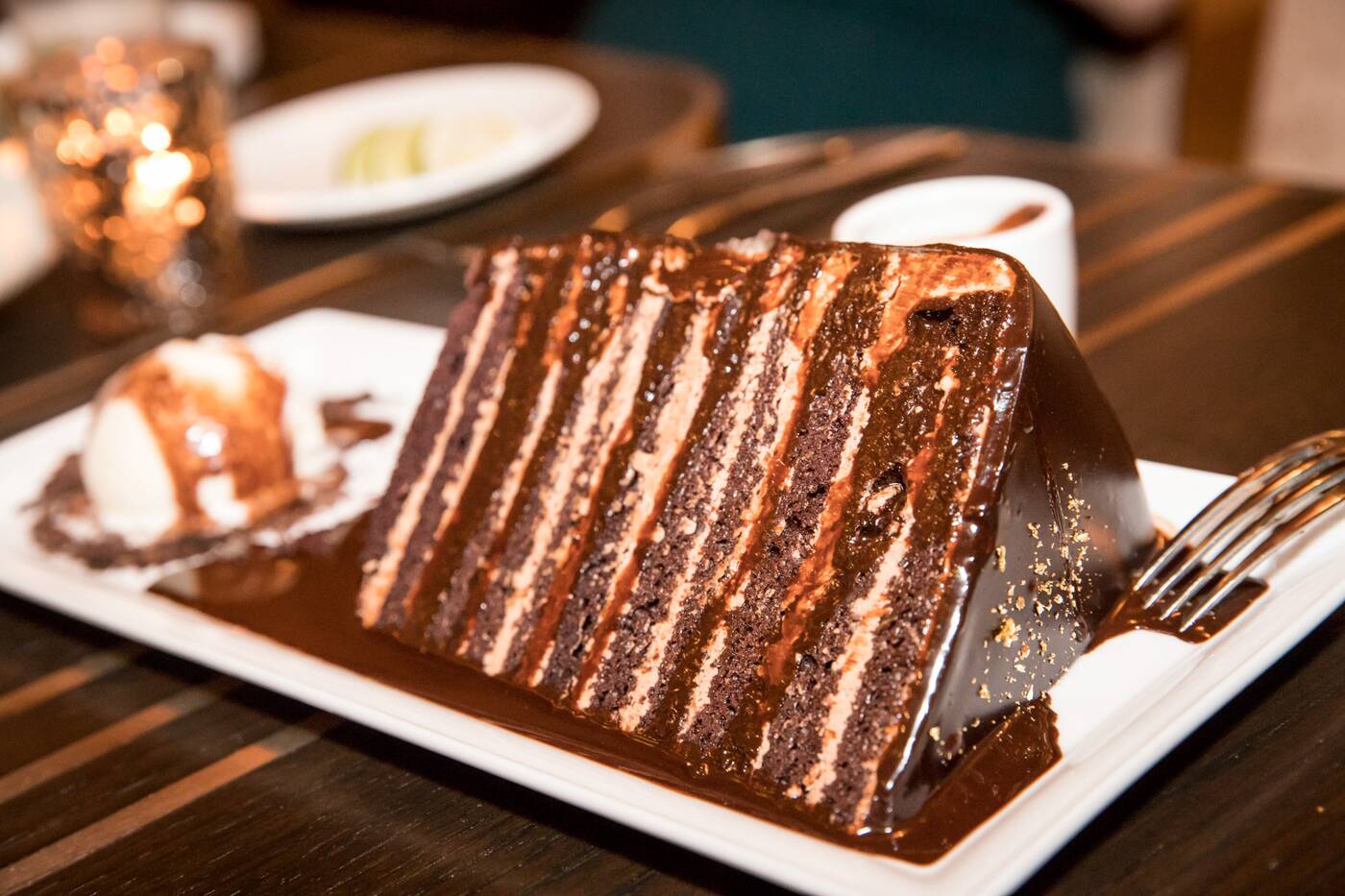 Pastry chef Heather Mordue has created a pièce de resistance dessert with The King's Cake ($26), a 13-layer chocolate cake held together with a 64% Guayaquil dark-chocolate ganache, its top sprinkled with flecks of gold fit for royalty.

It comes with a scoop of vanilla ice cream and chocolate sauce poured tableside, an elegant end to an extravagant and satisfying meal. 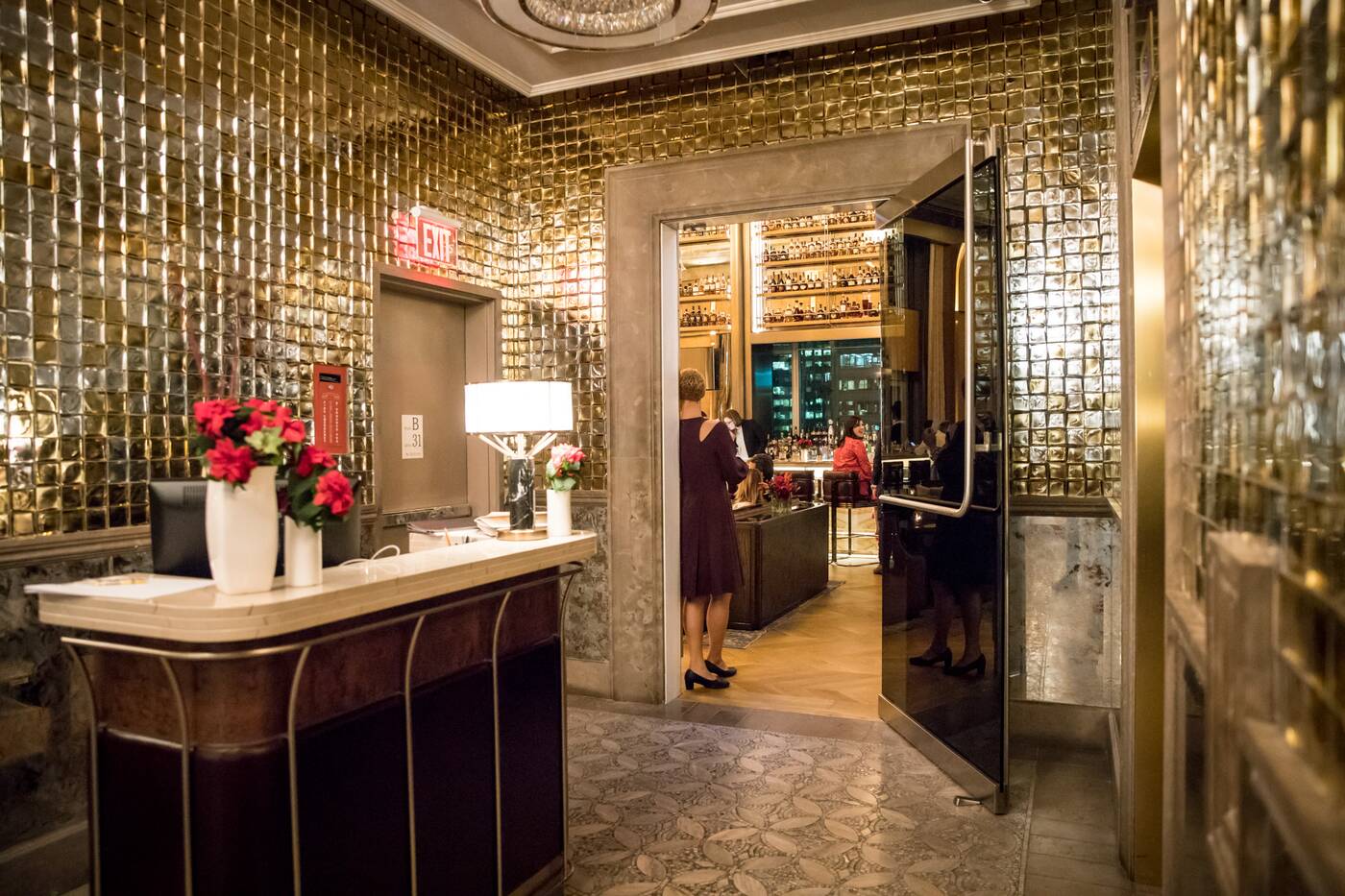 The Best Hotel Bars in Toronto