Phyllo Cafe is a family-run Greek cafe. They’re open early til late, serving phyllo pies made from scratch by hand, Greek-style crepes, and something called a Poseidon Cheese Boat.

As much as possible is made from scratch on site, largely in an open kitchen space. 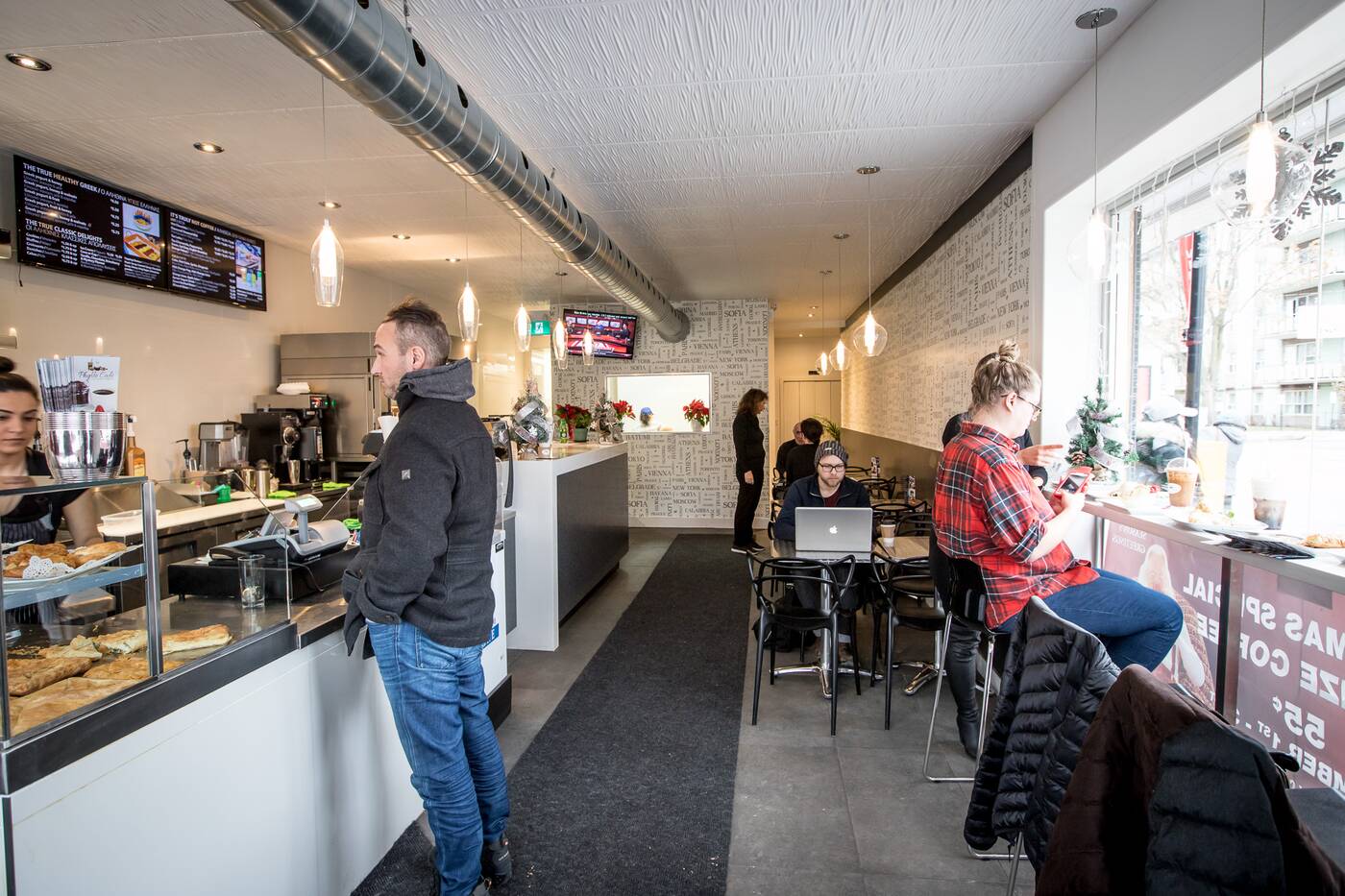 The father of the Grigoriadis family, who runs the place along with his wife, son, and daughter, is a contractor, and designed the space to his exact vision. It’s a relatively small space that’s often packed with a lineup but seating seems typically available. 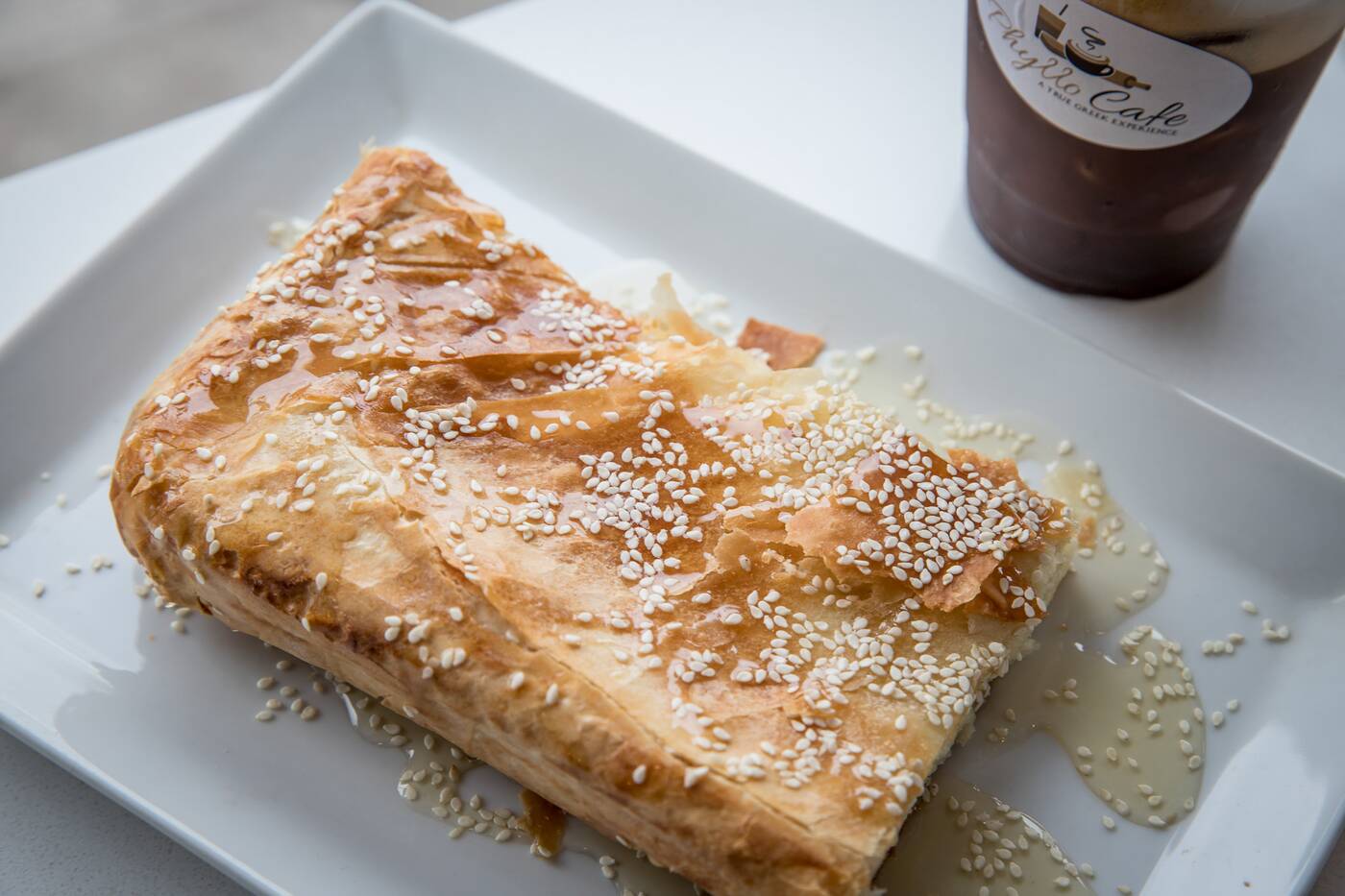 Called “The Sweetest Torontonian Cheese Pie” ($4.50) on the bilingual menu, this very traditional cheese pie is only done in some areas of Greece, served drizzled with honey and sprinkled with sesame seeds. It’s indeed very sweet, and extremely flaky. 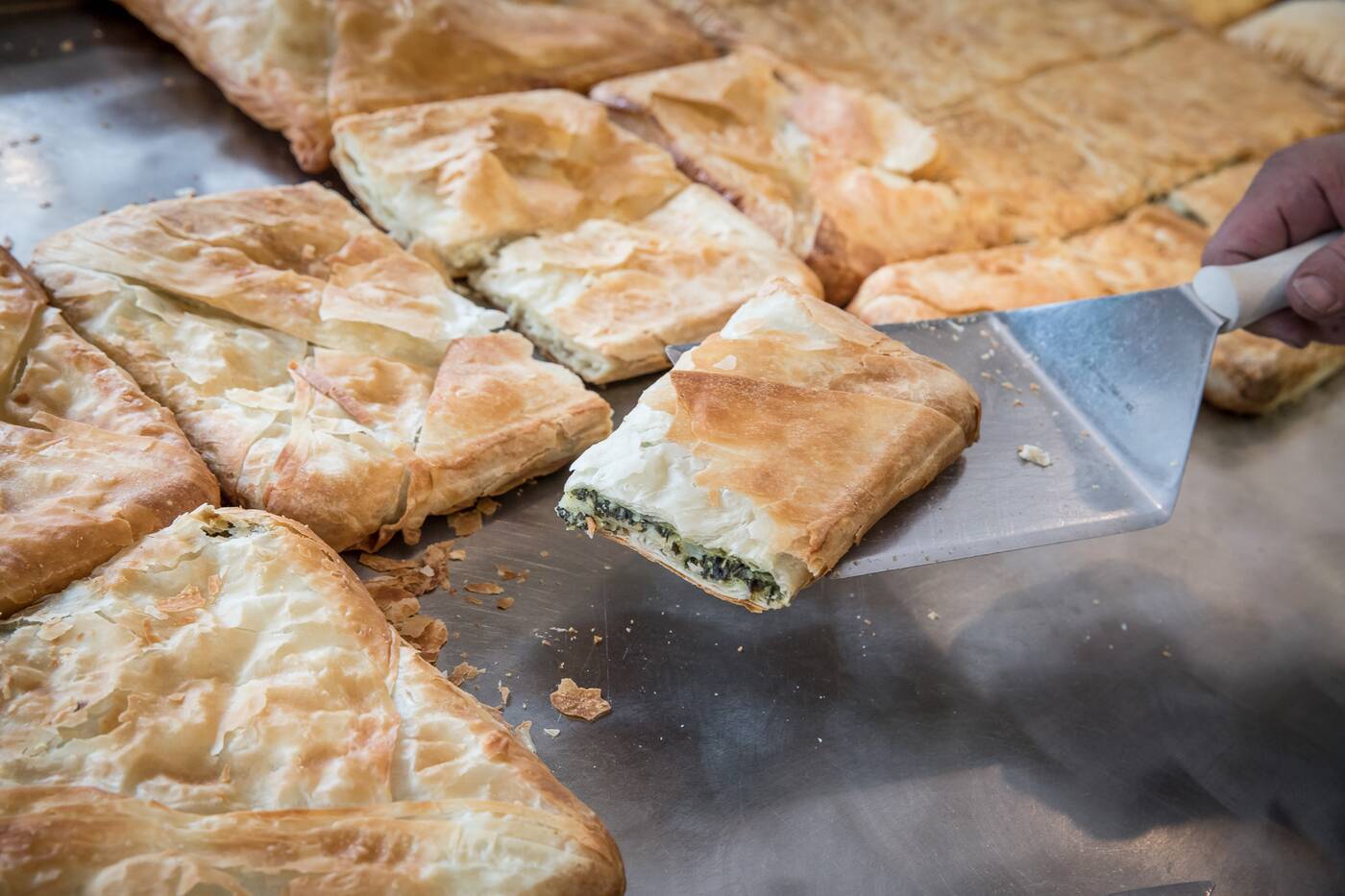 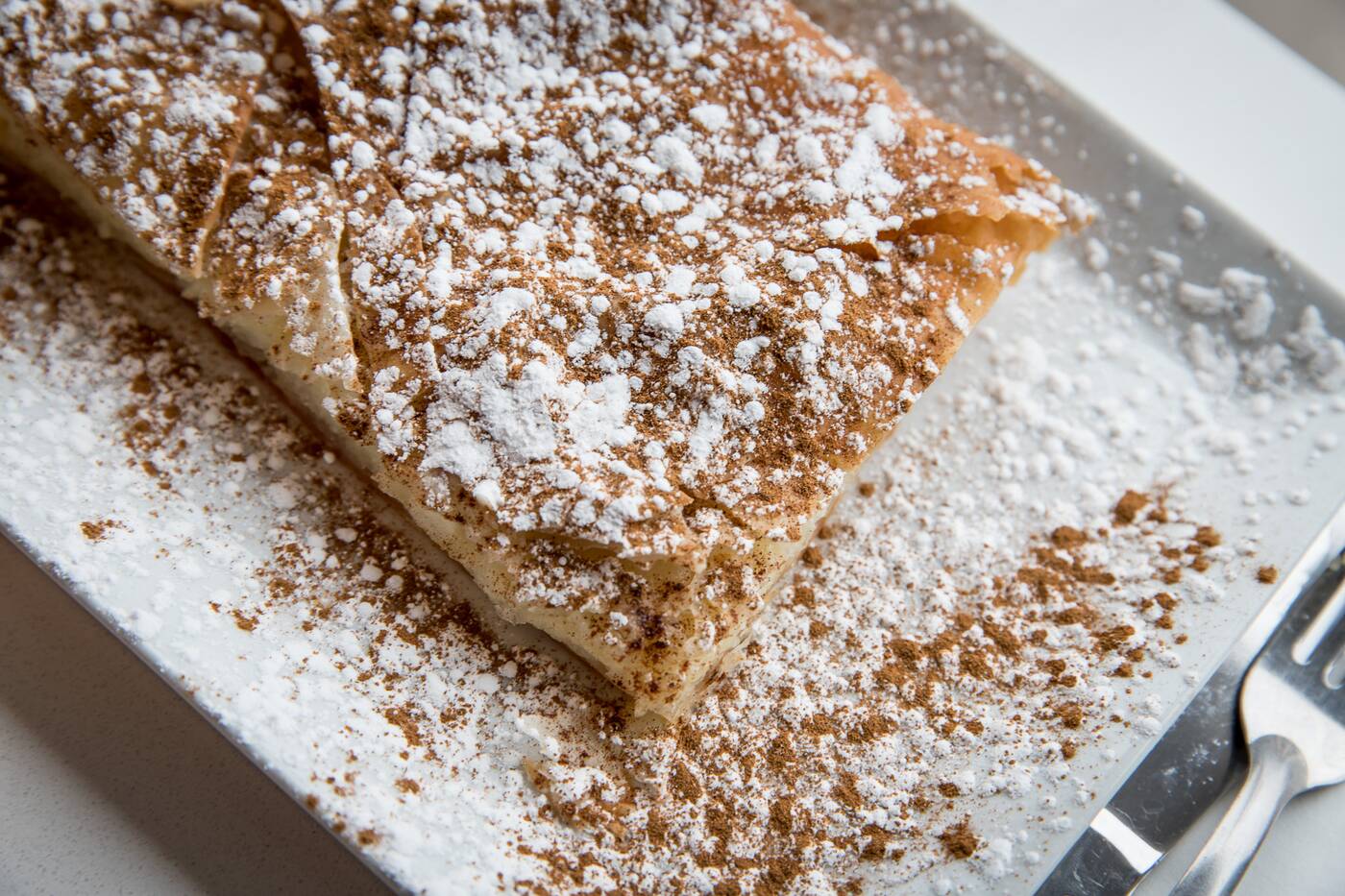 The Serres Bougatsa ($4.75) is a sweet Greek phyllo pie with custard, cinnamon and icing sugar that’s a must try if you’ve only ever had savoury Greek pies. 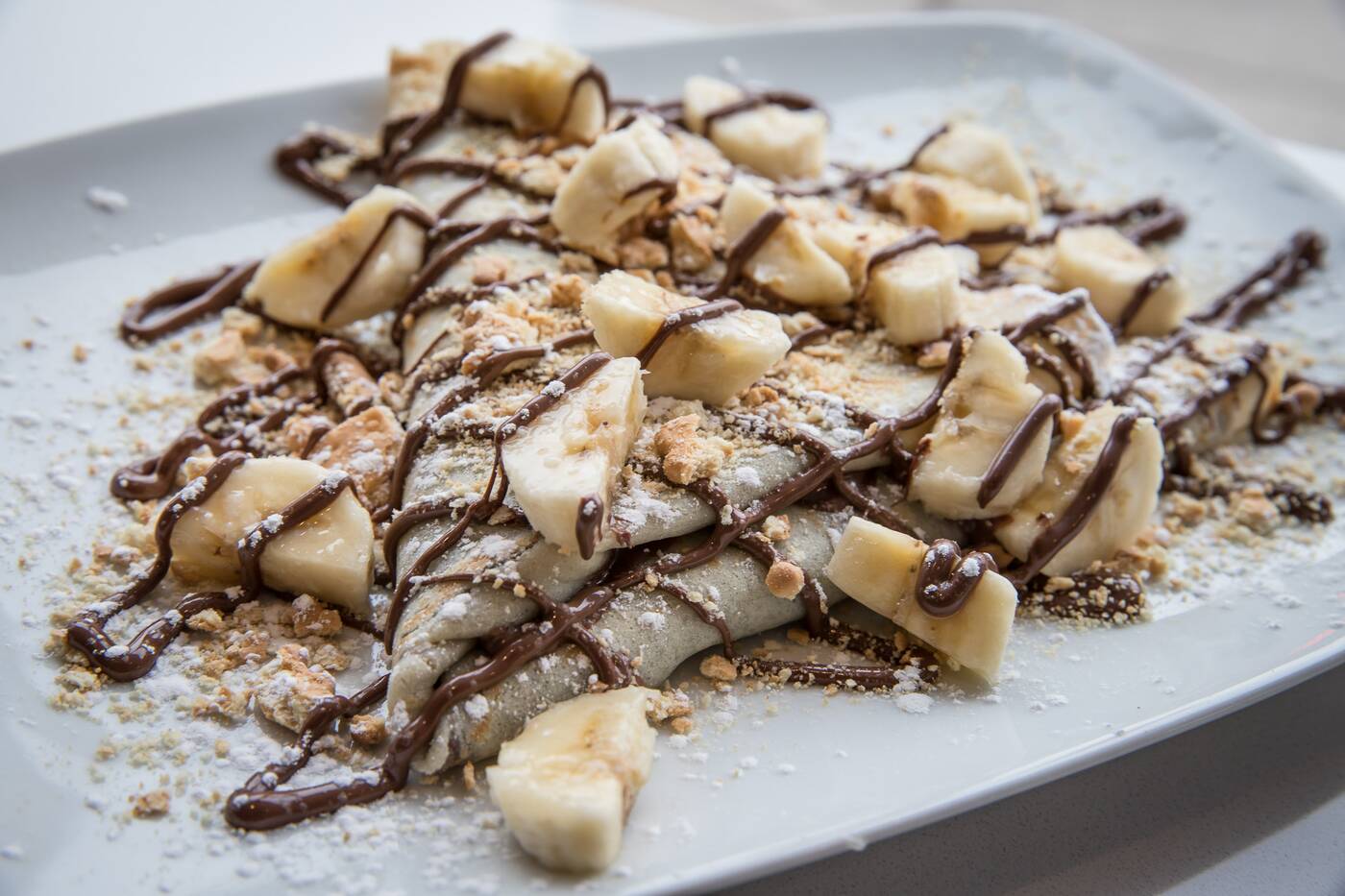 Greek-style crepes all have the names of Greek celebrities, like the Nia Vardalos ($8.75) with Nutella, banana and crushed Greek Papadopoulos cookies. The ingredients are stuffed inside and scattered on top for a crunchy, textural, over-the-top treat. 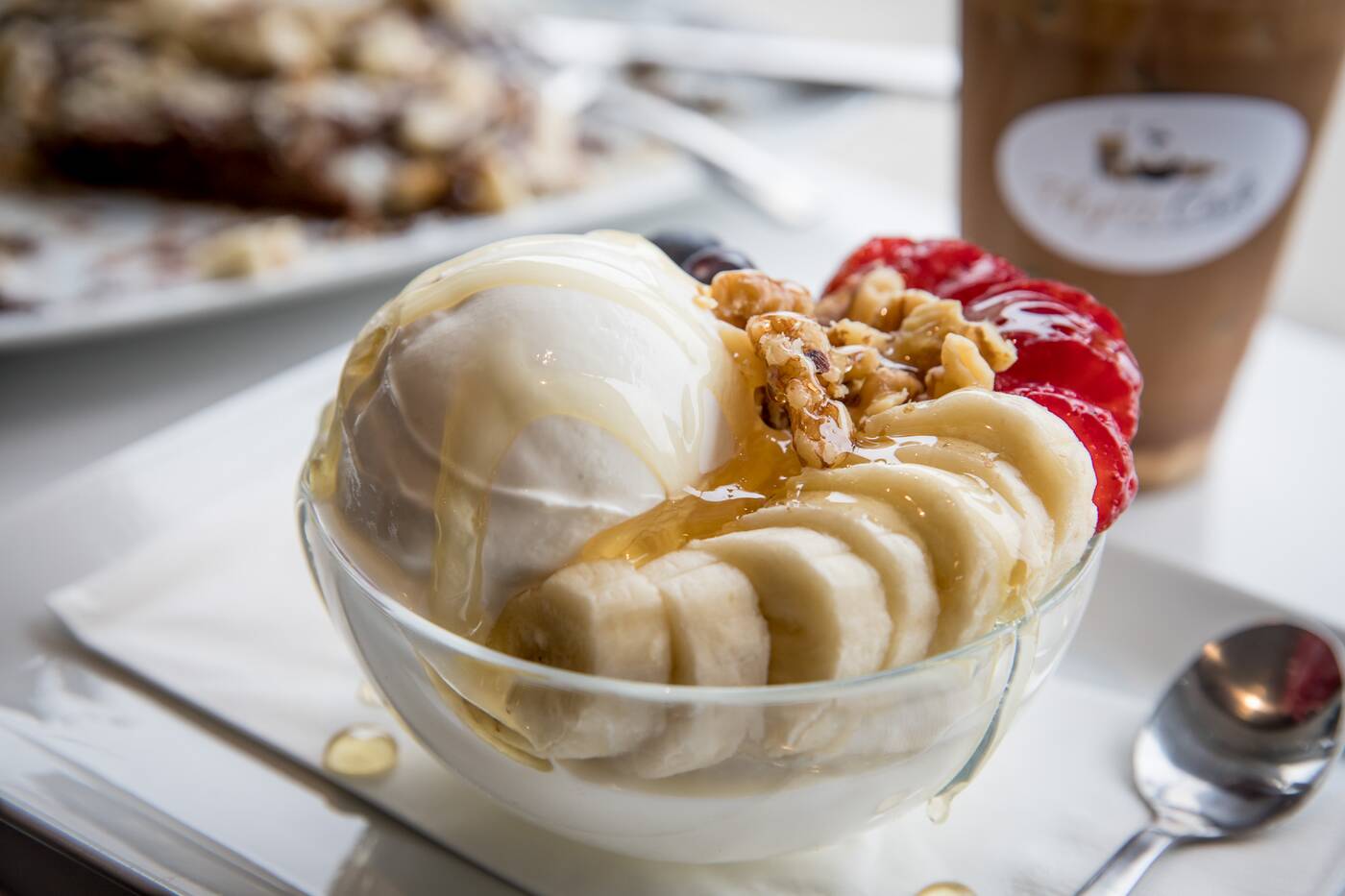 Greek yogurt with fruit, honey and walnuts ($5.75) is scooped like ice cream, so if you’re a Greek yogurt fanatic, this seems like it would be the portion size for you. Take or leave any of the toppings, and the yogurt is dense and tangy.

Tear off chunks of the oval crust and dip into the buttery, gooey pool of cheese it surrounds and just wait for your heart to stop. 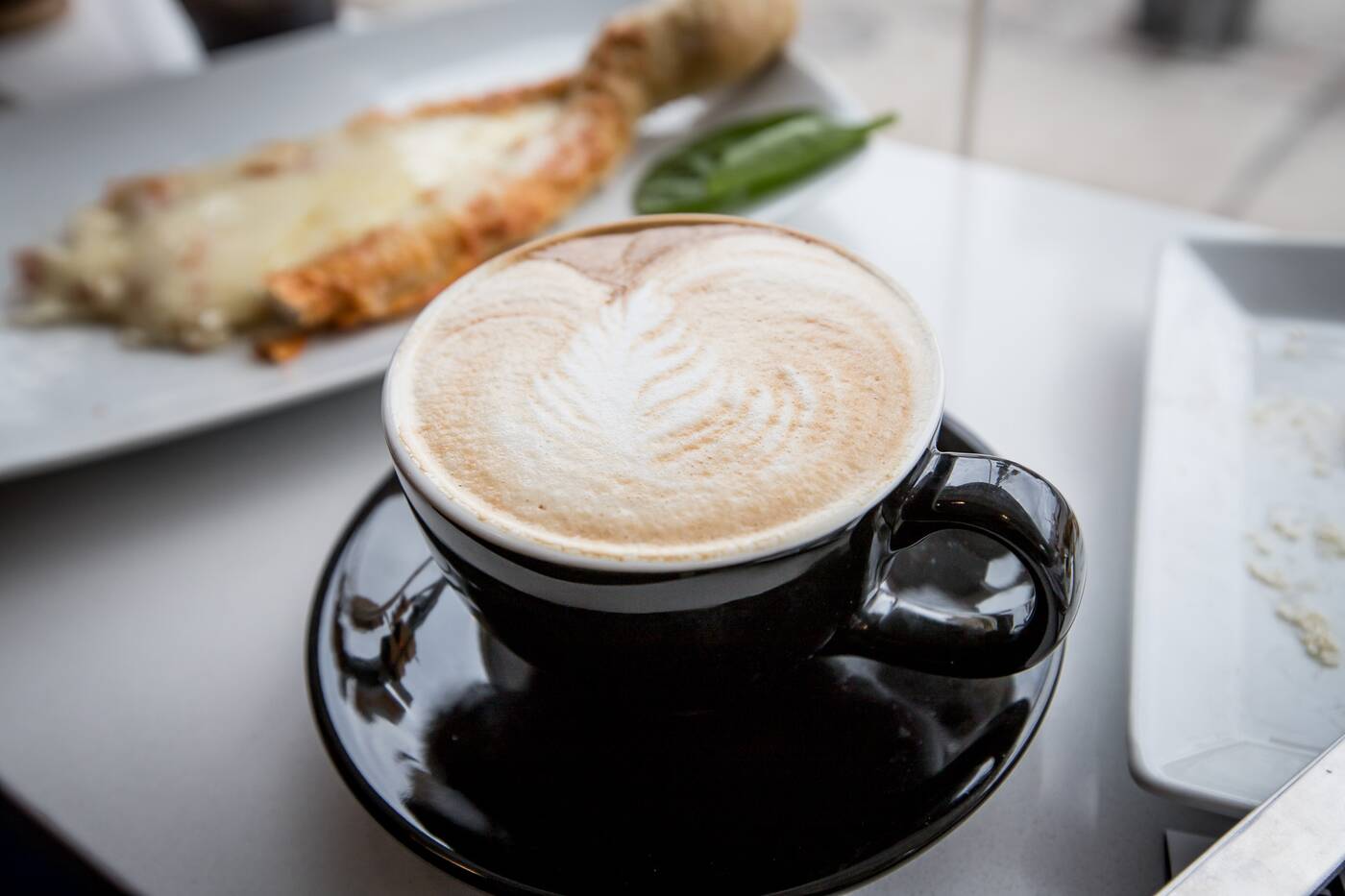 A Simonelli machine turns out cappuccinos ($3.50) made with Rufino beans like a beast at this busy spot. 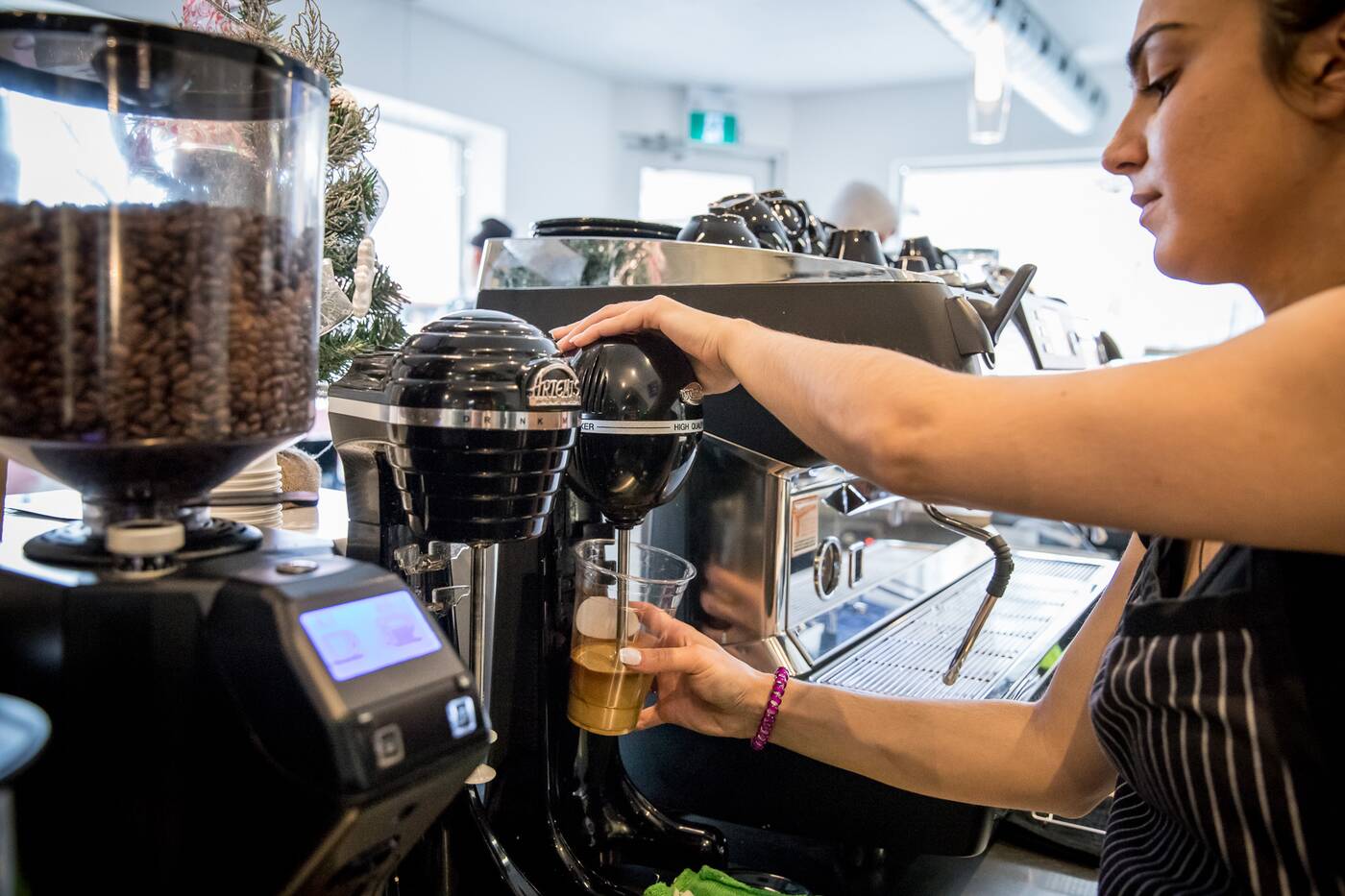 A freddo cappuccino ($4) is made using machines brought back from Greece. 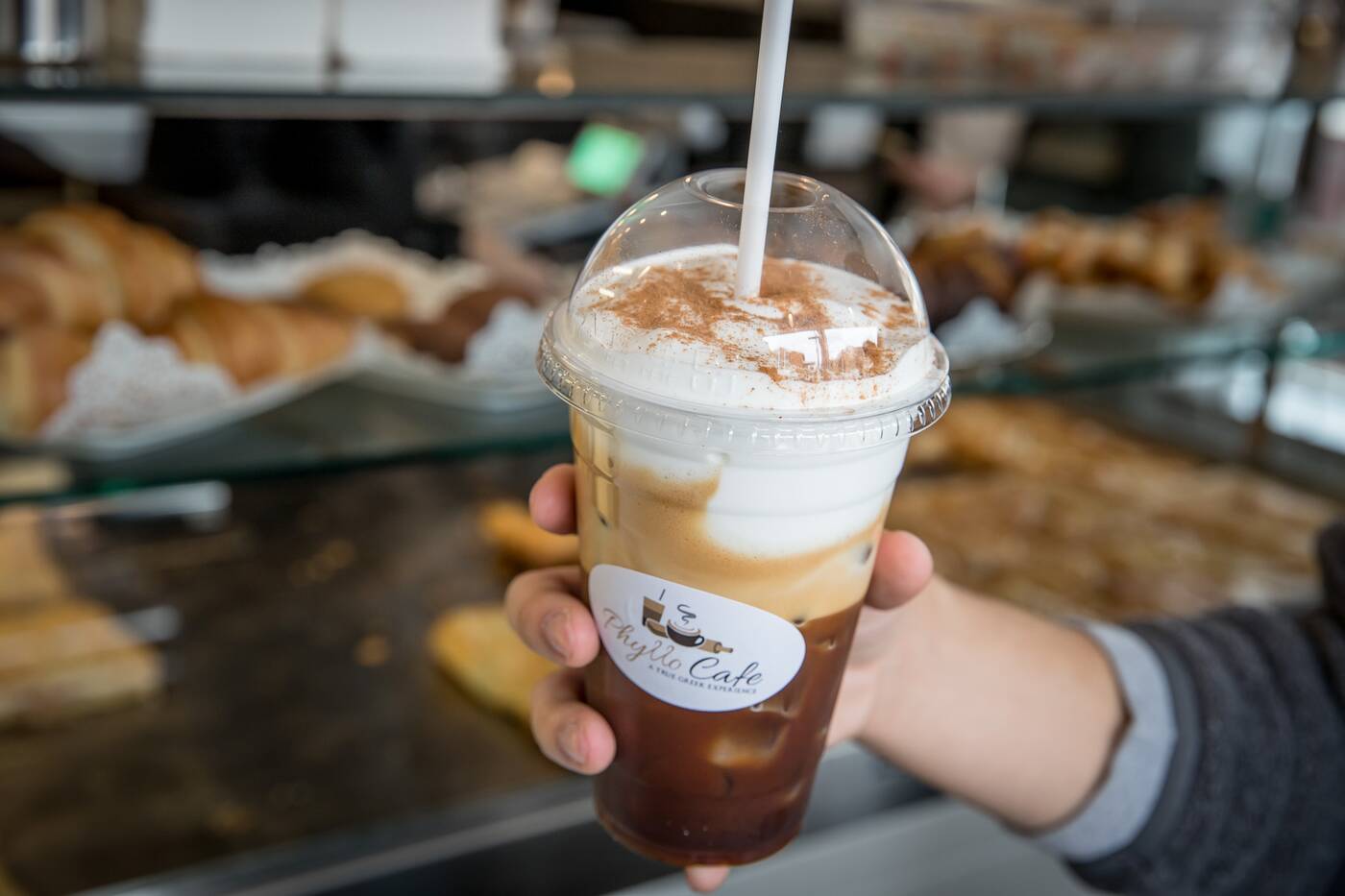 It’s capable of getting milk to the consistency of shaving cream, and the three distinct layers indicate a truly perfect freddo. 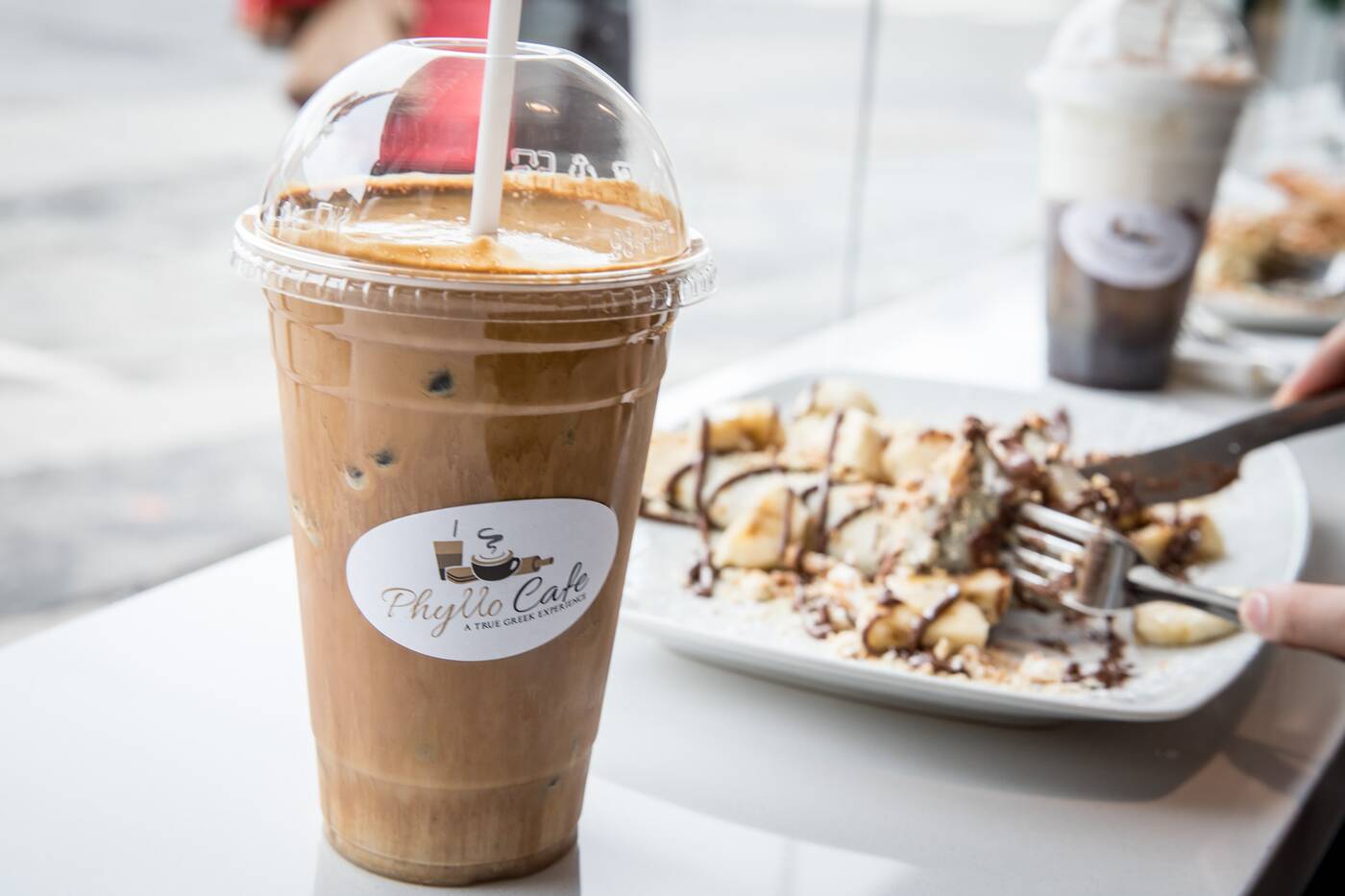 A frappe ($4.25) is also done in true Greek fashion, cold, creamy and strong. Optionally, top it with ice cream. 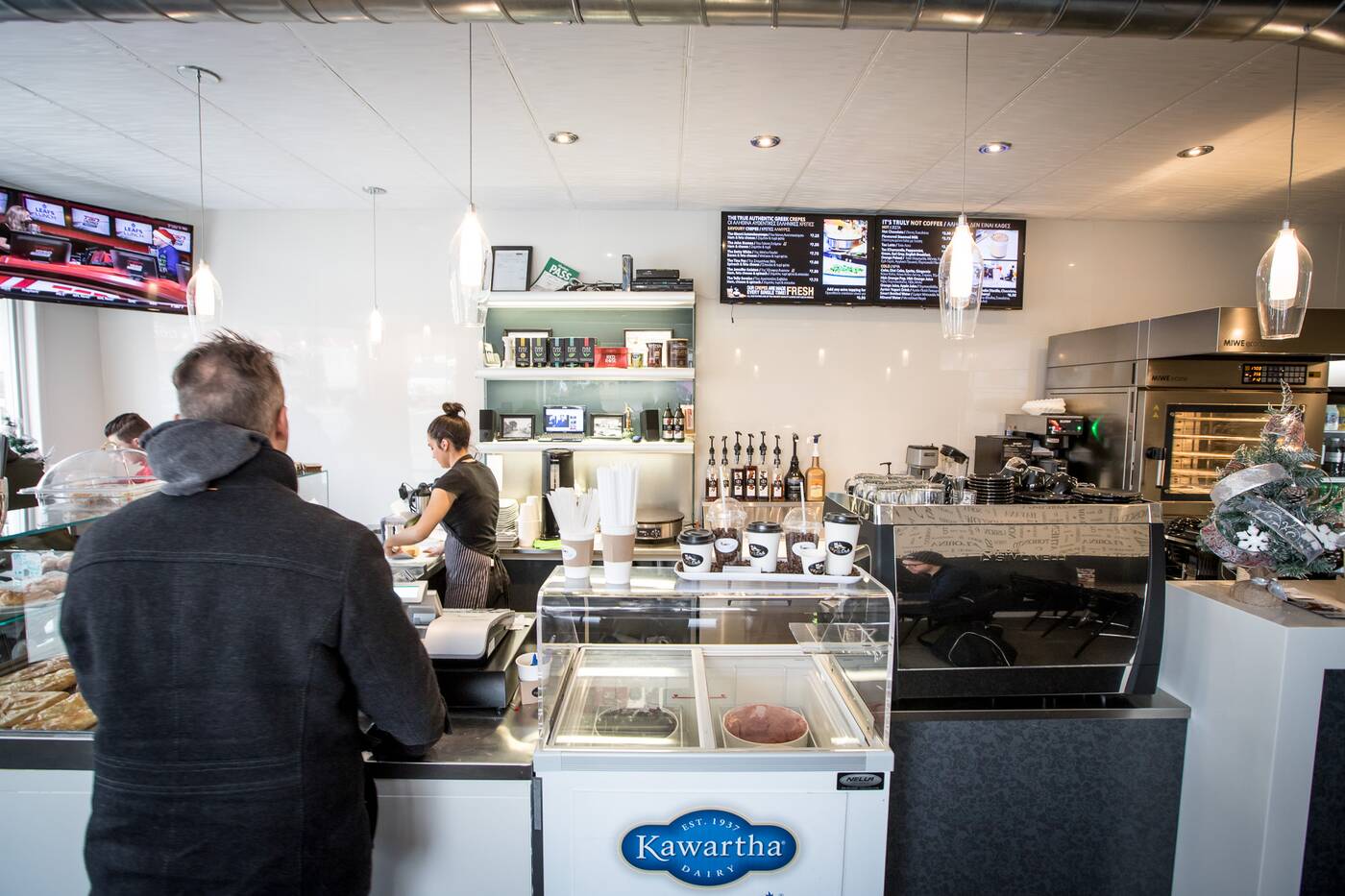 It’s worth waiting in line for the Greek treats at this warm cafe. 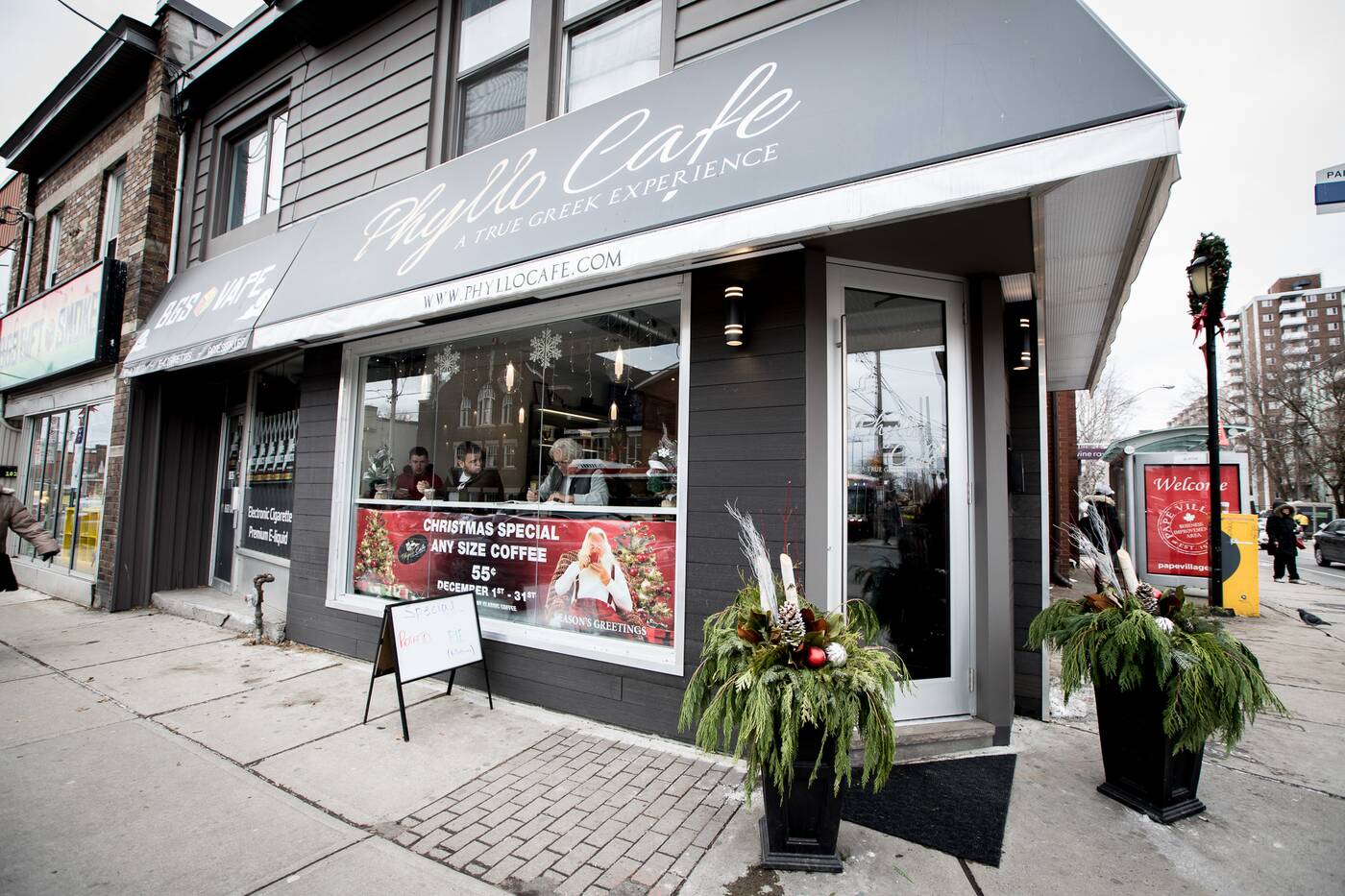