Cafe Landwer is a brunch, lunch and dinner spot that comes to Canada from Berlin by way of Israel, originally opened in 1919 by Moshe Landwer. 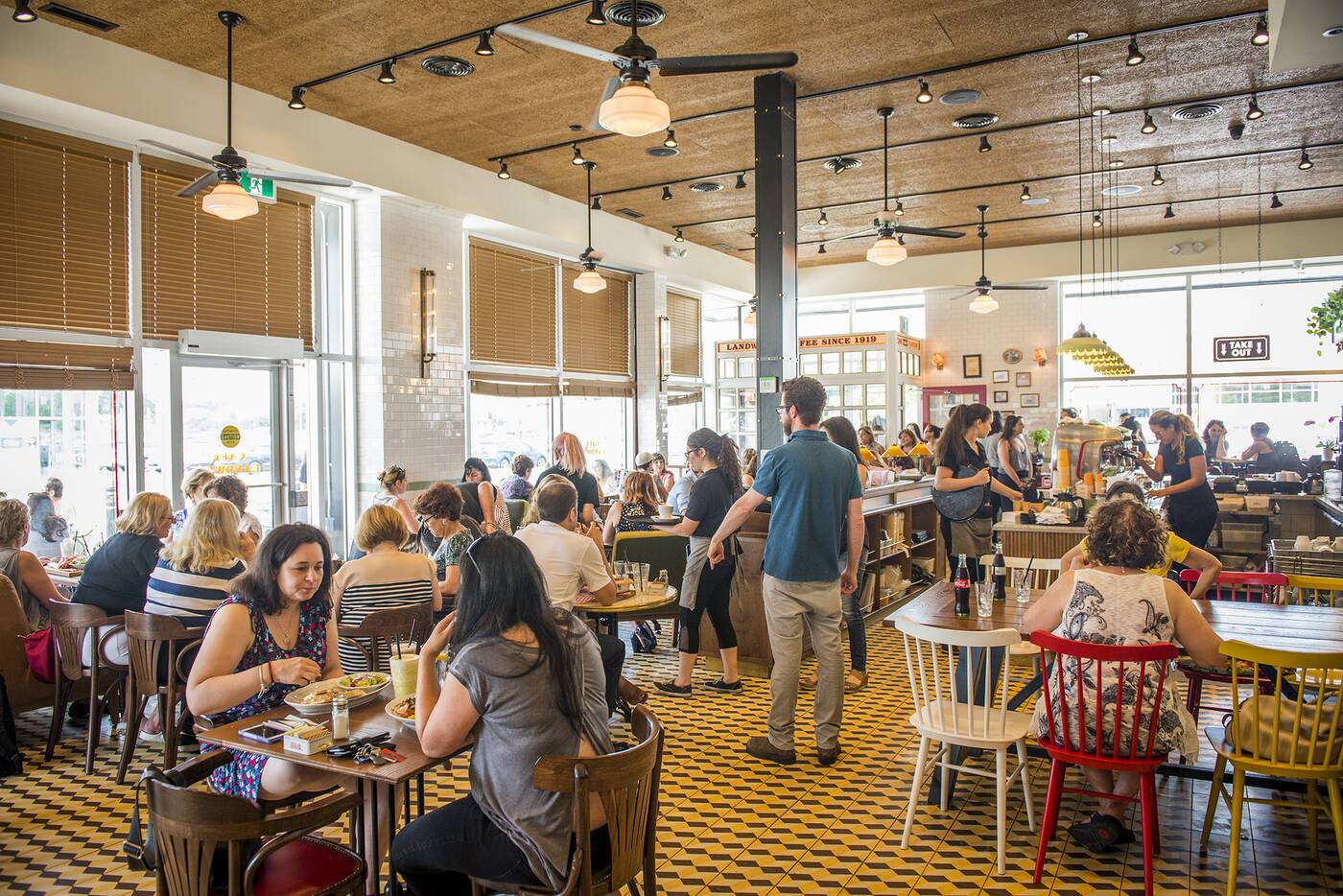 This is the first location in Canada, located up in Thornhill to get a temperature reading on how Torontonians would receive the concept. Even on a Wednesday morning, lineups are already out the door. 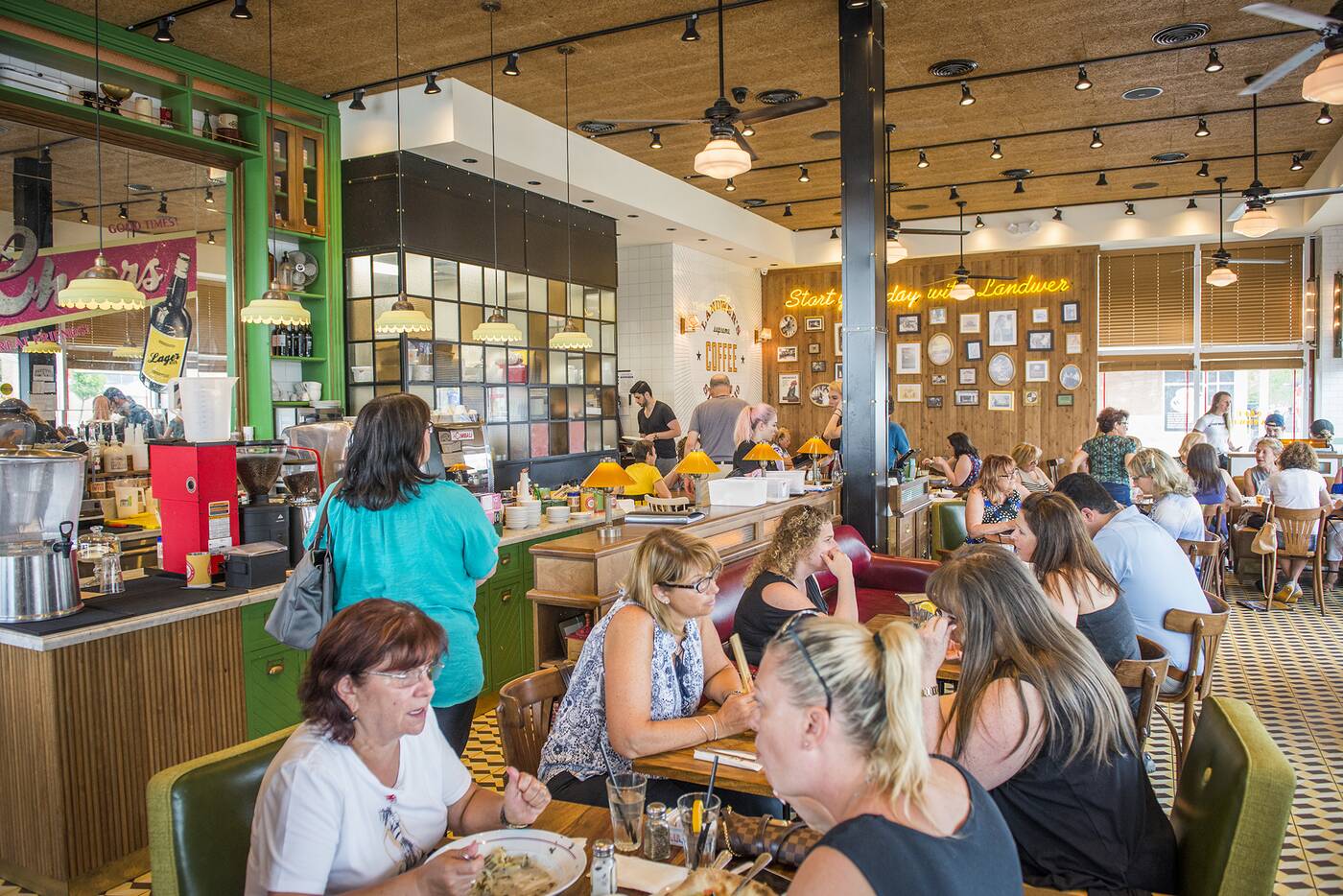 The space is designed in a modern vintage style with a tiled branding wall on one side advertising the place’s hundred-year heritage and old photos elsewhere. Each Cafe Landwer apparently has something a little different, though the overall style is similar. 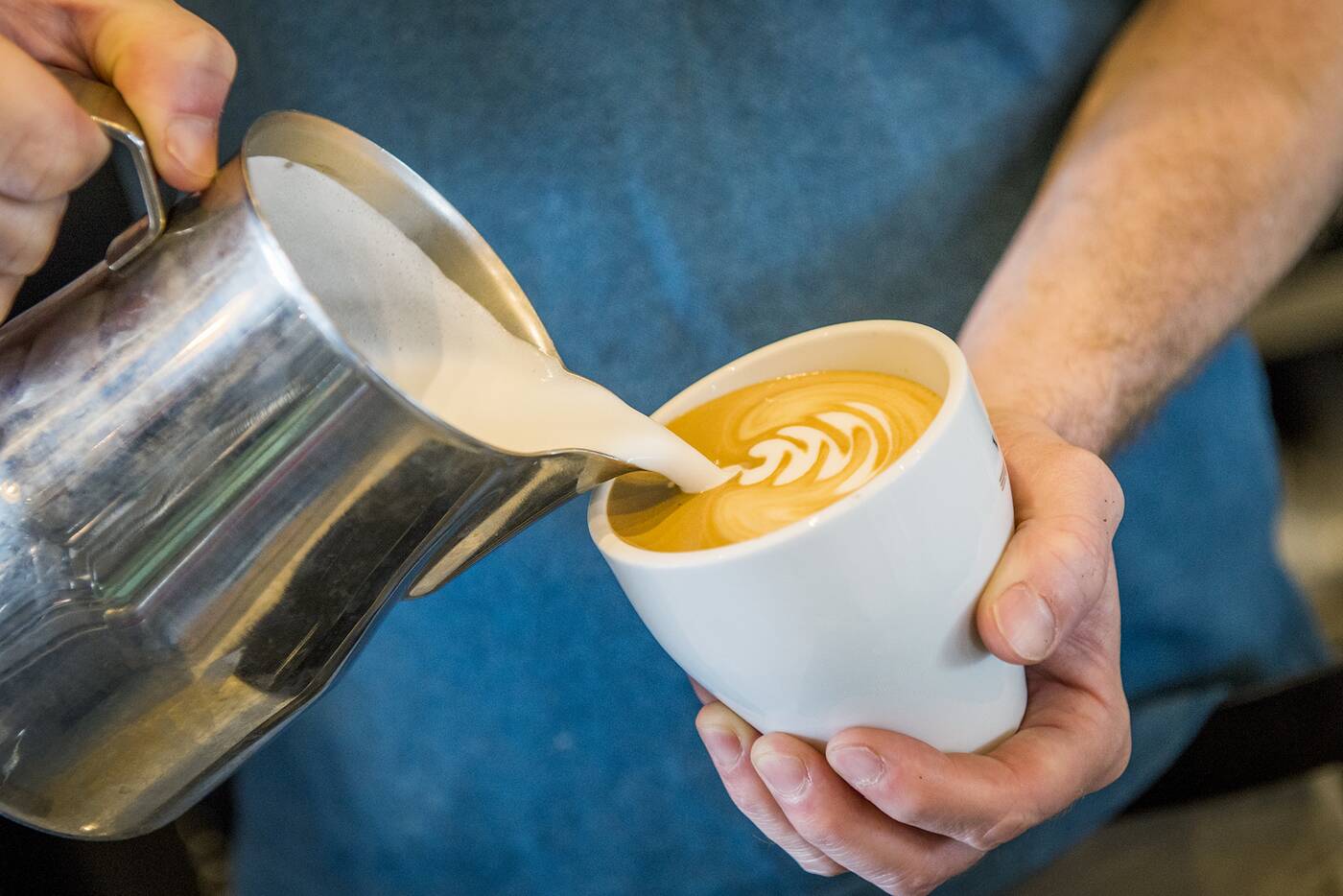 The origins of Cafe Landwer are rooted firmly in coffee. The first cafe to open is actually also a roastery. It’s since expanded to food with the atmosphere of a social gathering place. 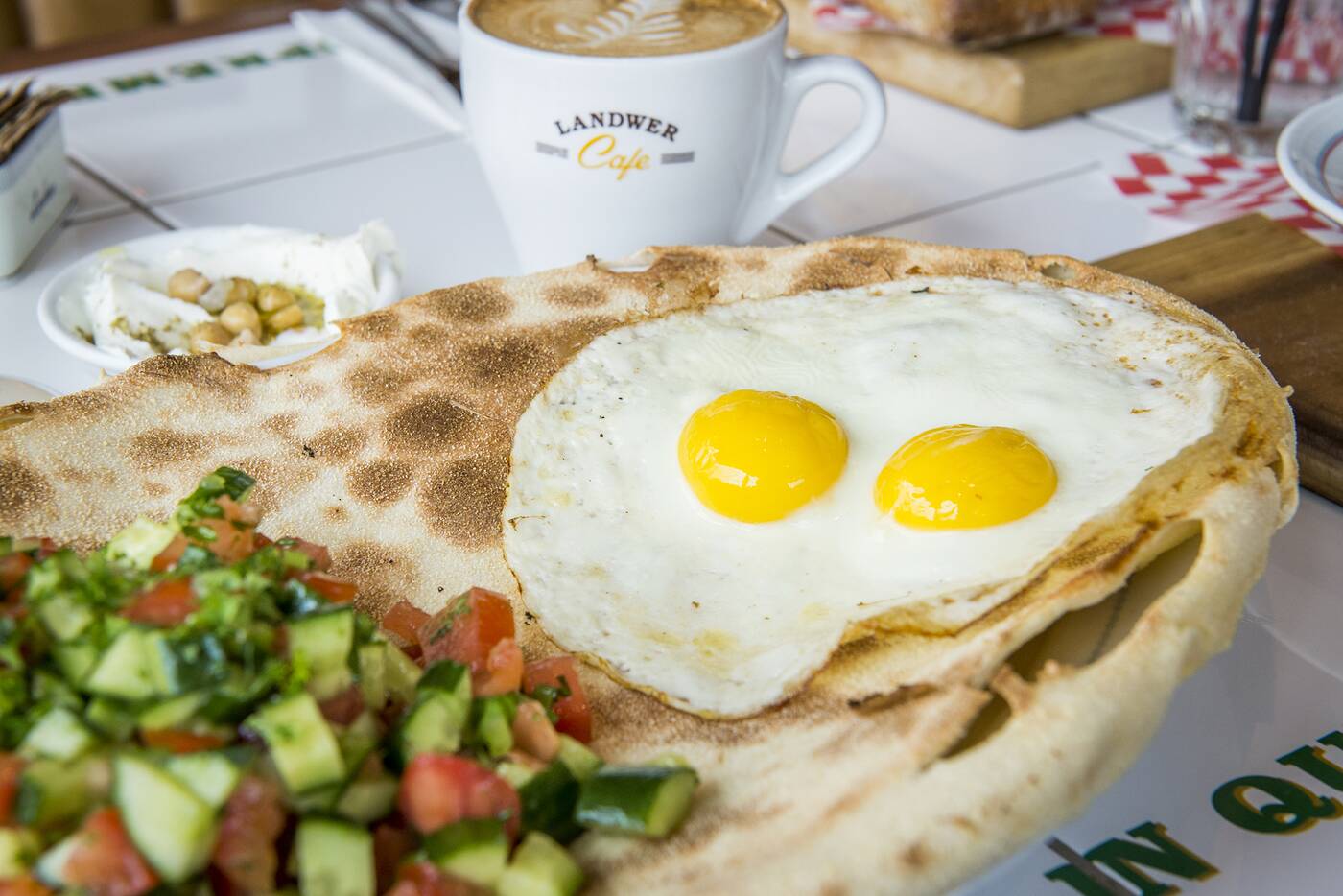 The Farmer’s Breakfast ($12) is layered on top of a “focaccia” that provides the base for many dishes. It's more of a flatbread than an Italian loaf.

It’s thin and crusty in the middle and chewy around the edges, topped with sunny eggs and an herby chopped tomato and cucumber salad and served with tahini and labneh that’s good for bread dipping. 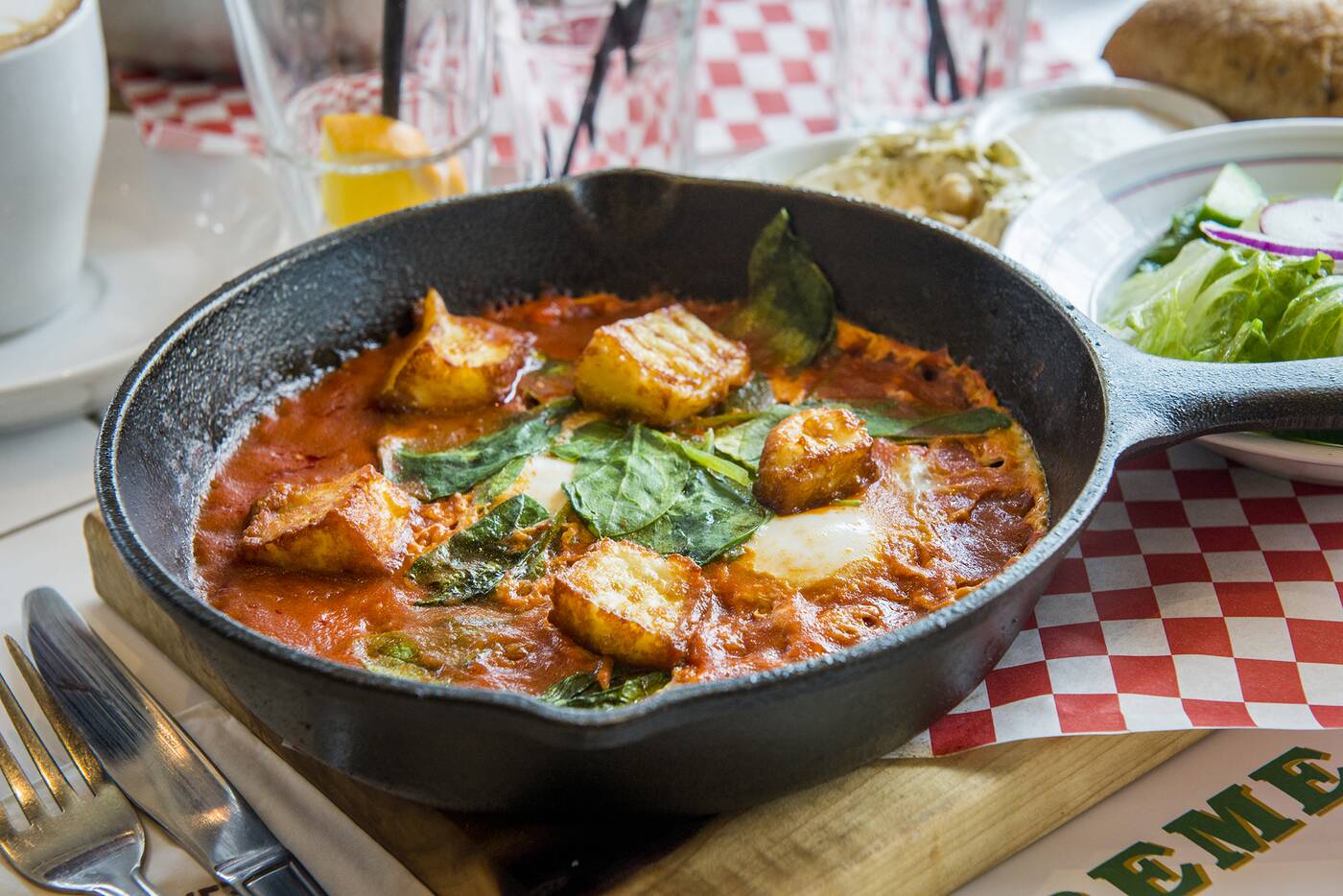 Halloumi shakshouka ($15) is one of several varieties available, with the eggs baked in a tomato sauce studded with big hunks of squeaky cheese and spinach.

It’s served with bread (I prefer dipping the crusty multigrain into the dish over the sesame bun), a breakfast side salad and the same tahini and labneh. 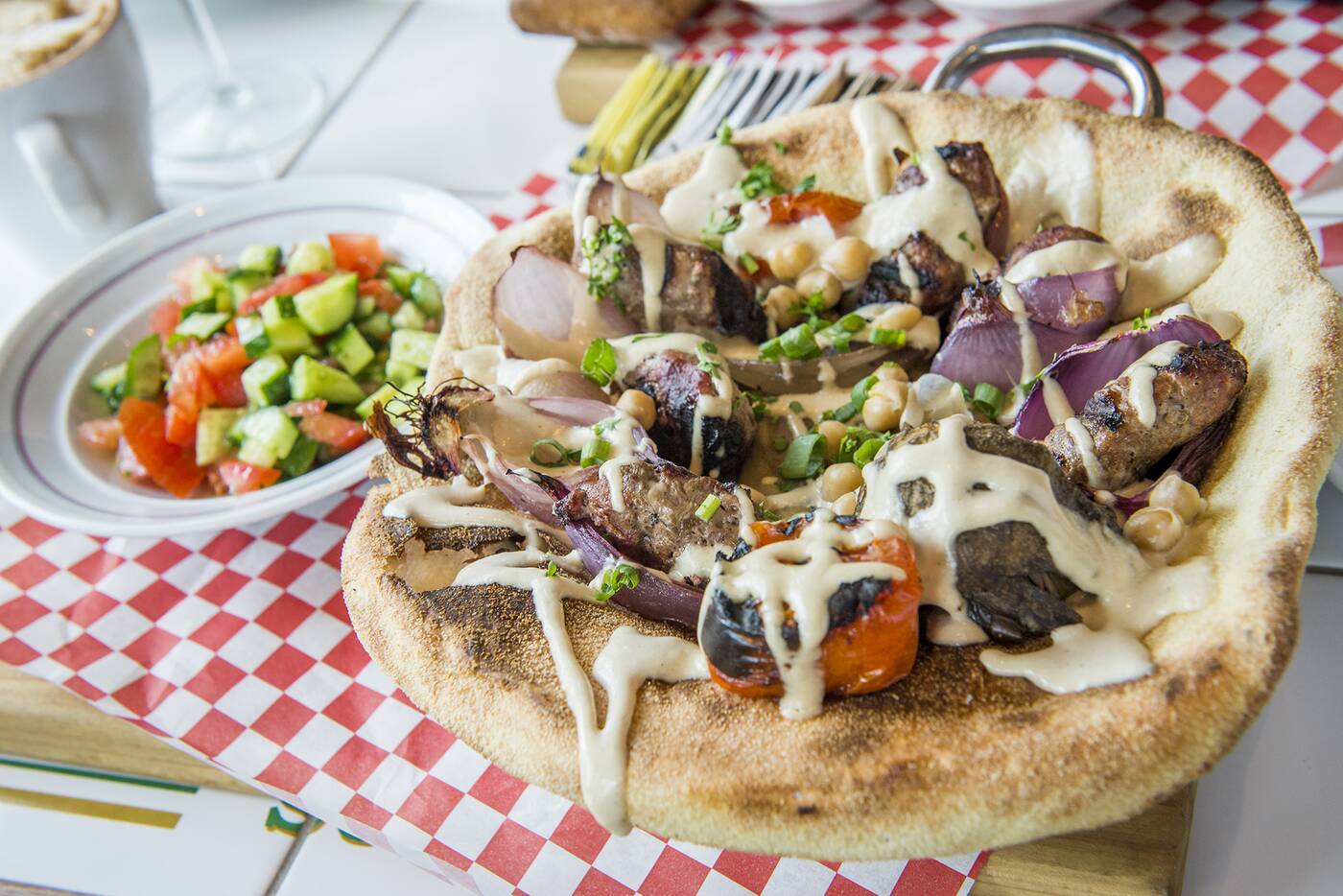 Sinia kebab ($16) fills a hot stone oven baked focaccia bowl with beef kebab, smoky charbroiled eggplant, tomato, onion that’s flavourful but curiously has a few tattered little roots left on, chickpeas and parsley all drizzled with tahini. The same chopped salad on the Farmer’s Breakfast is served on the side. 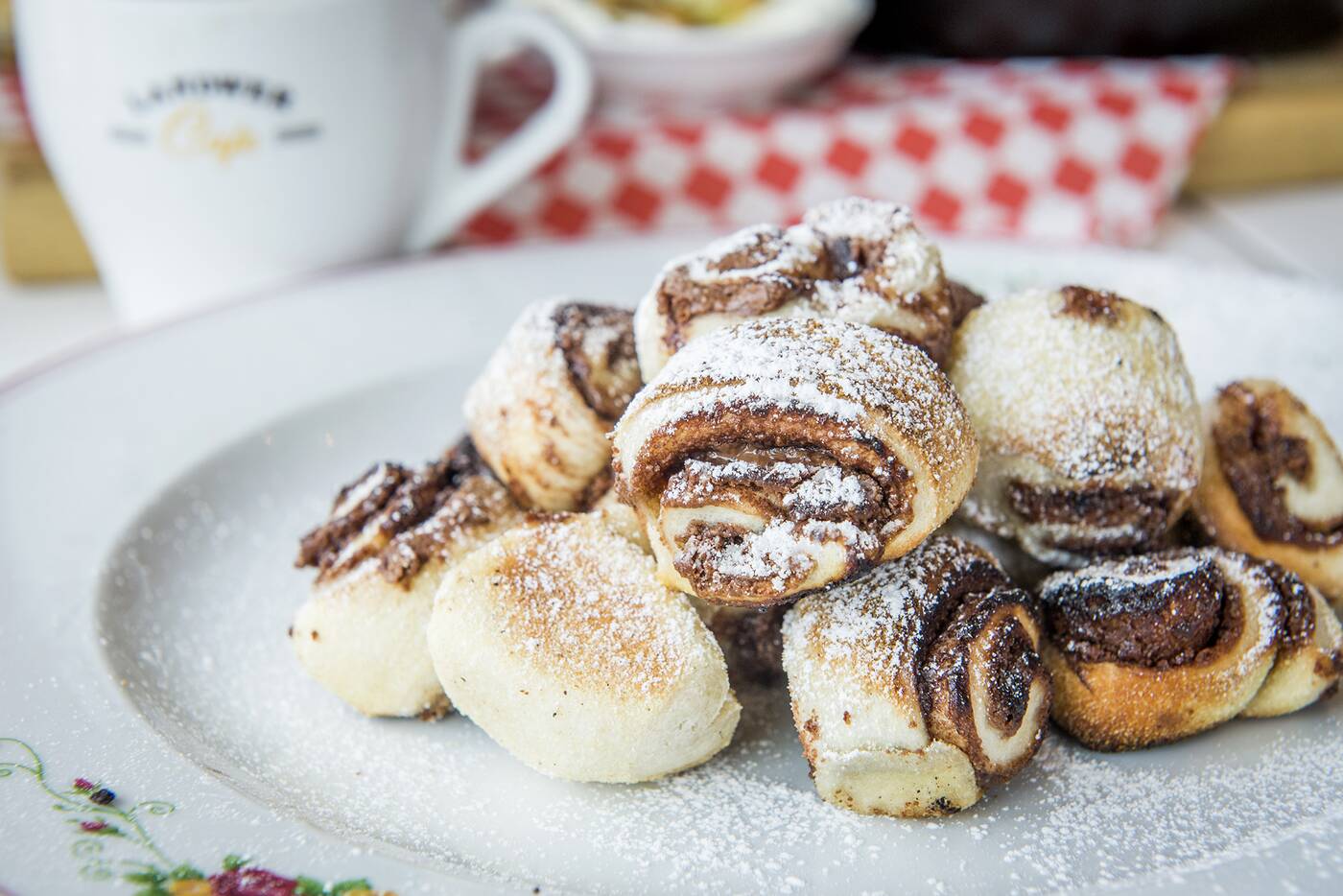 Rozalach ($12) is an Israeli dessert that comes in many varieties, with chocolate and halva options available here. A pile of chocolate rozalach comes out warm, perfectly bite-sized little balls of goodness. 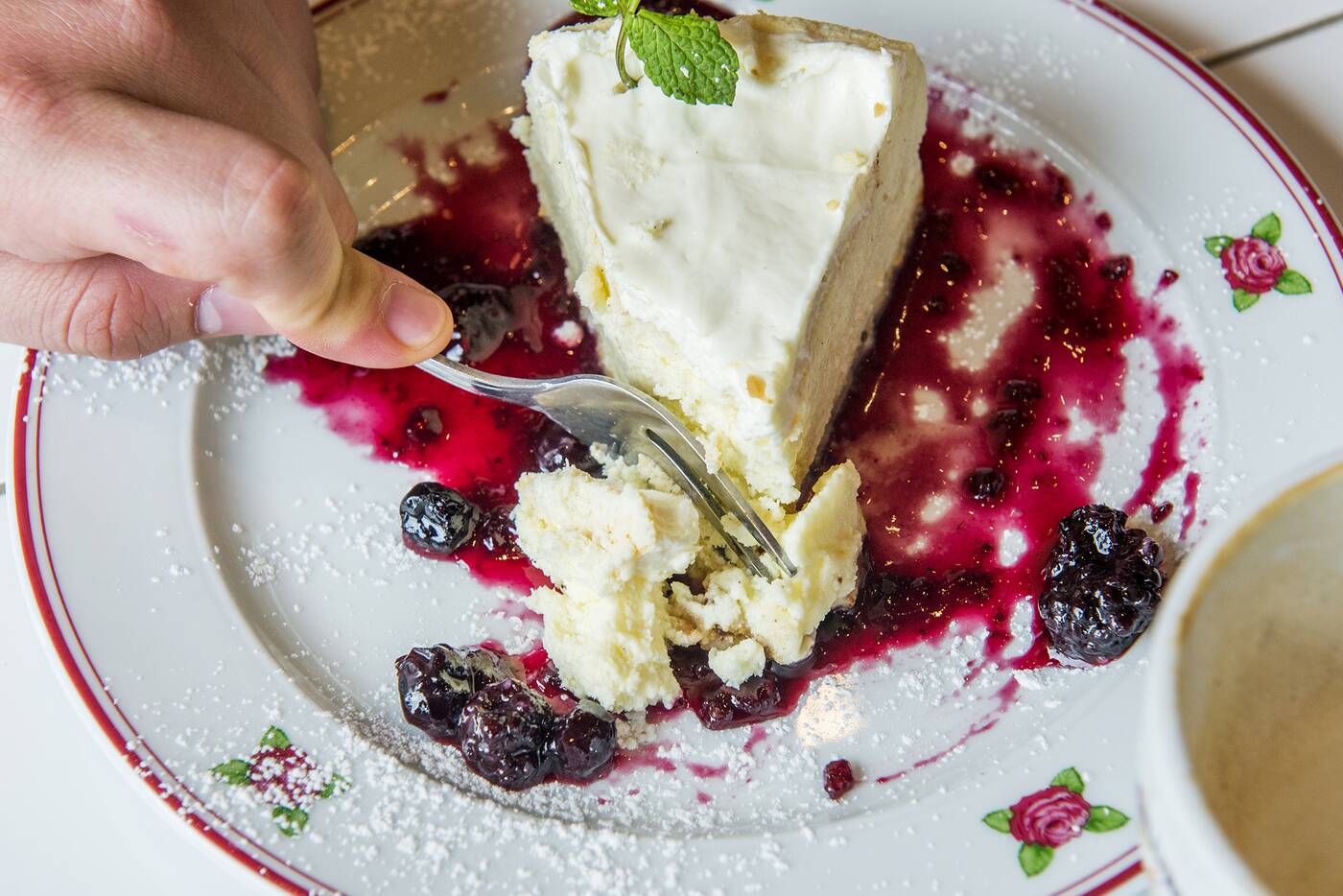 They also have a “legendary” crumbed cheesecake and baked cheesecake (both $10), the rich latter of which comes with a berry sauce. 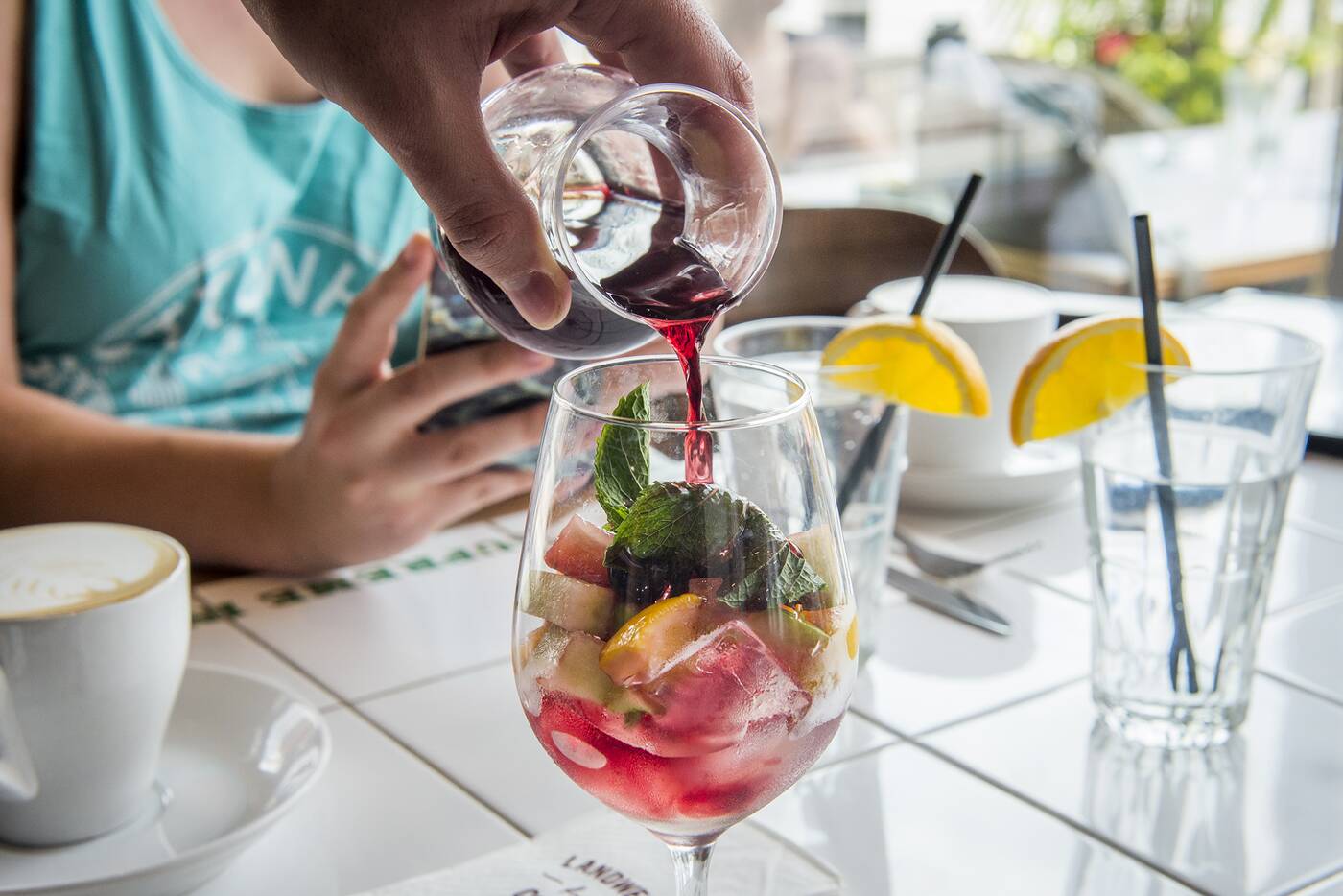 They’re actually open deceptively late for a place known for its brunch, til 11 p.m. some days. Basic beer and wine are available along with red and white sangria, the crushable red made with pomegranate syrup, apple cider, fresh fruit and mint. 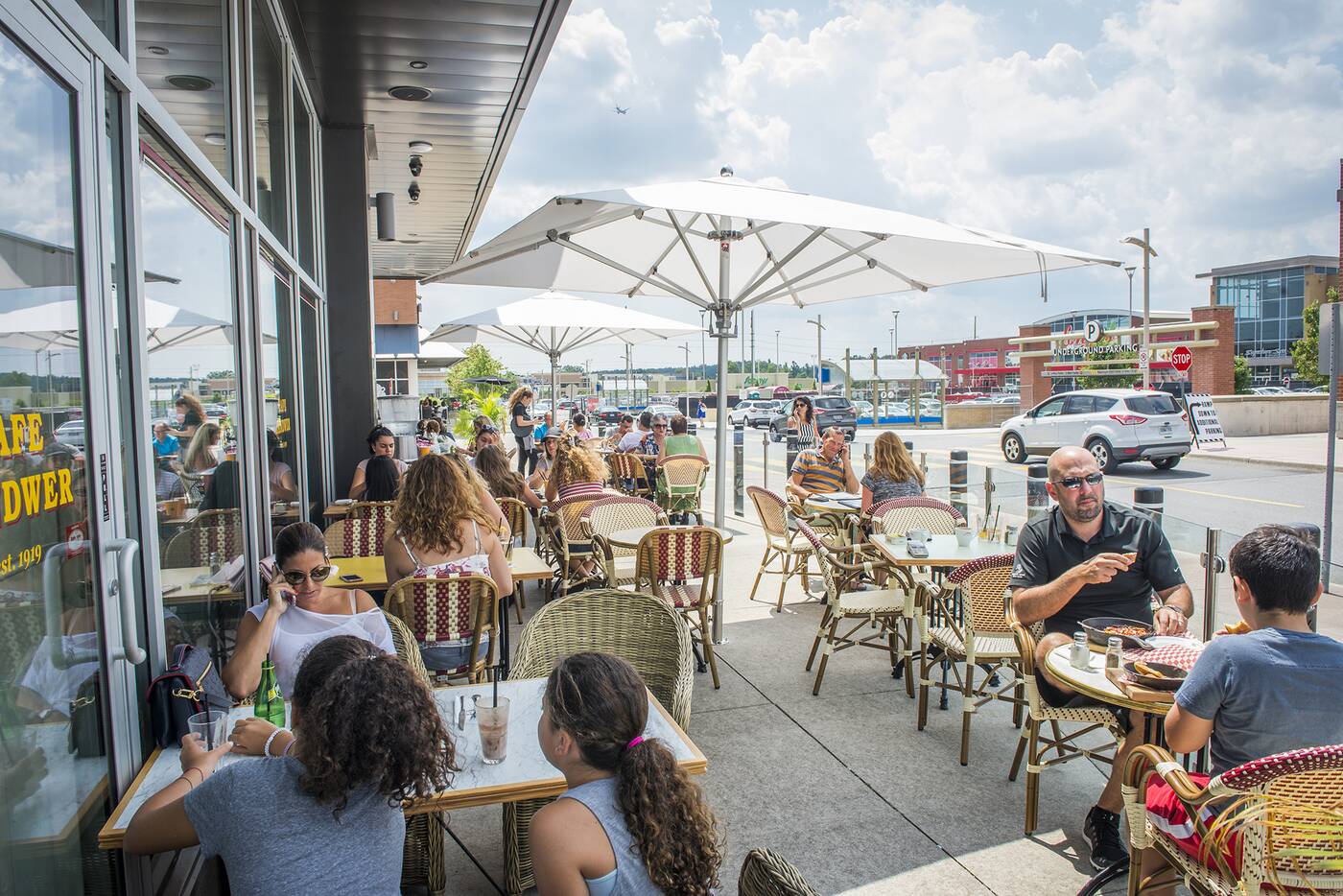 There’s also a pleasant patio out front for nice days. Though the view from this location is of a strip mall, if patios are included in future downtown locations, those surroundings are sure to be a little more interesting and metropolitan. 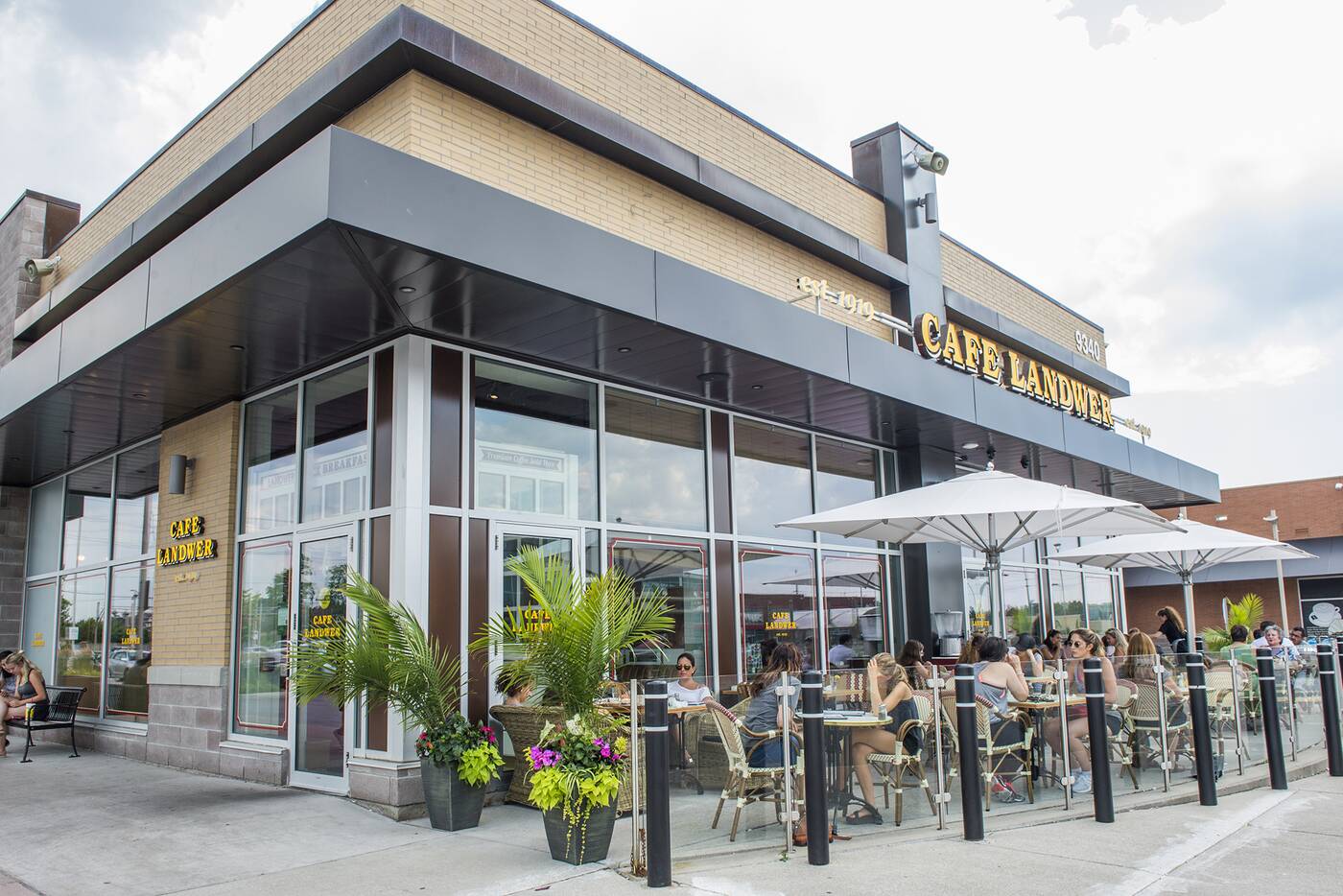