The Haam is currently open but their offerings and services may be affected due to the pandemic. Please contact the business directly for more information about any changes. Is this your business? Please contact us if you would like to update this message.

The Haam is a restaurant for anyone who's feeling experimental: serving quality Western-inspired Asian dishes in a laid back atmosphere, it's perfect for date night or an evening out with friends.

With some prime real estate in the Entertainment District, the vibe is cozy-meets-industrial with exposed bricks and a wall of greenery to the right. 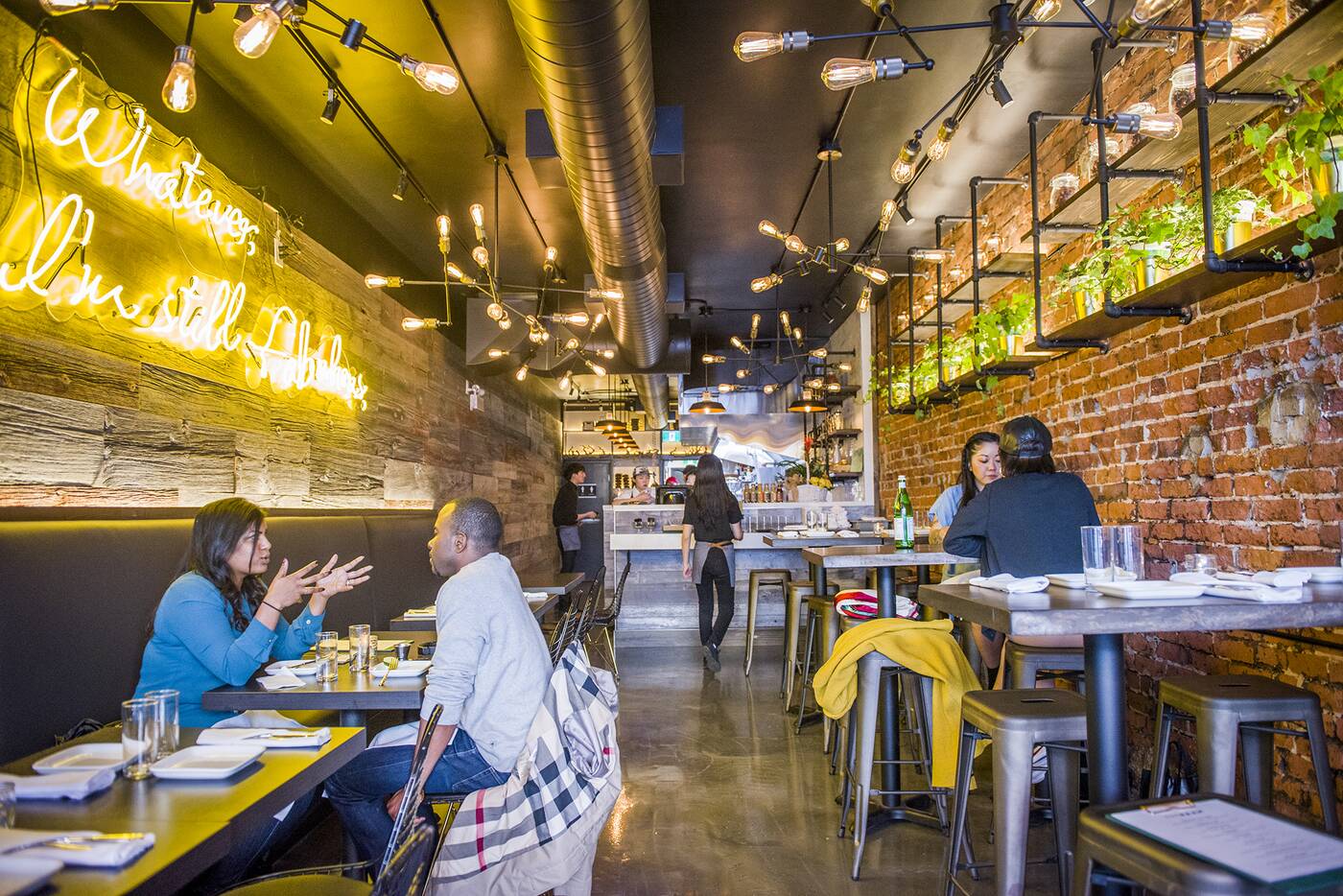 For those wondering how to pronounce the name: it's a soft drawn out 'a'; not to be pronounced like the pork cut.

According to the manager, 'haam' in Korean implies the act of adding or combining, which makes sense since every menu on the item combines some element of Asian – mostly Korean – cuisine with a Western concept. 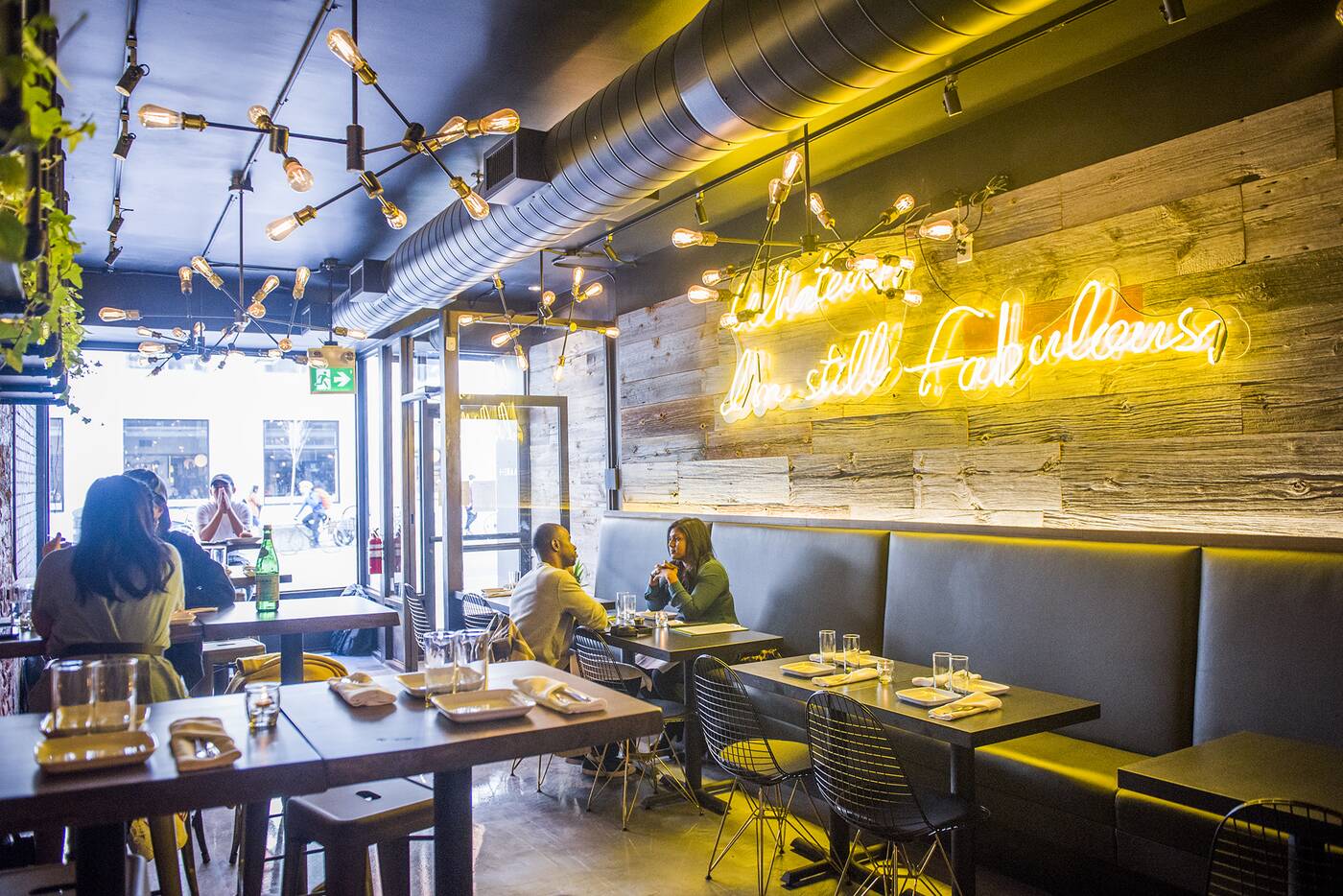 It's also a play on the owner's name, Joey Ham, who runs the Japanese fusion restaurant Saku Sushi a few blocks west. Saku's menu has previously featured mashups like kimchi cheese arancini balls, and the concept at the Haam is pretty much the same.

Open until 3 p.m. for lunch and re-opening at 5 p.m. with a separate menu, there are just nine options for evening diners. The lean menu is a plus: portions aren't huge here, and if dining with a group, you could realistically order every item to give everything a try. 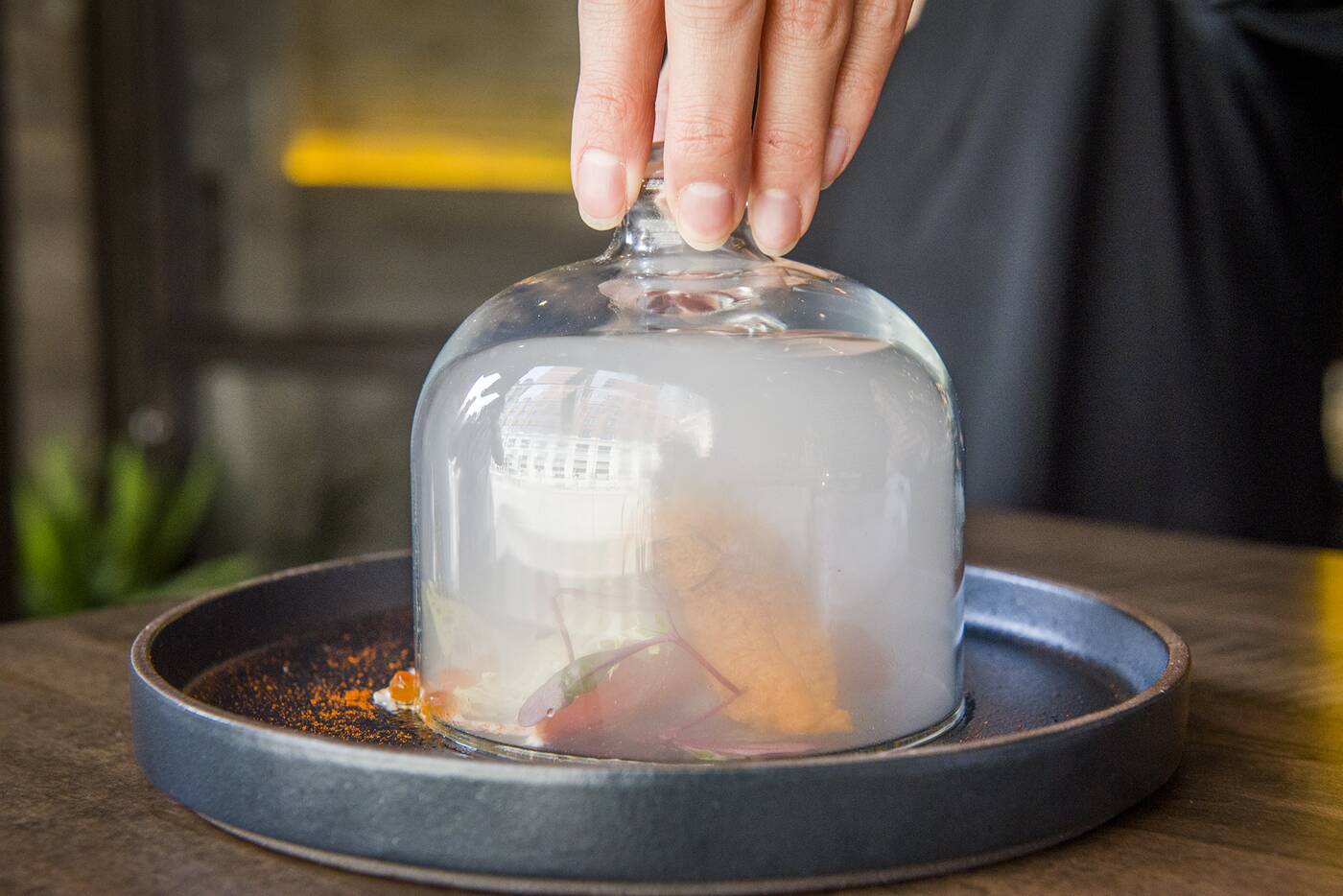 The raw botan shrimp ceviche ($15) is an alternative to the scallop ceviche, and comes in a smoke-filled glass dome for extra anticipation. 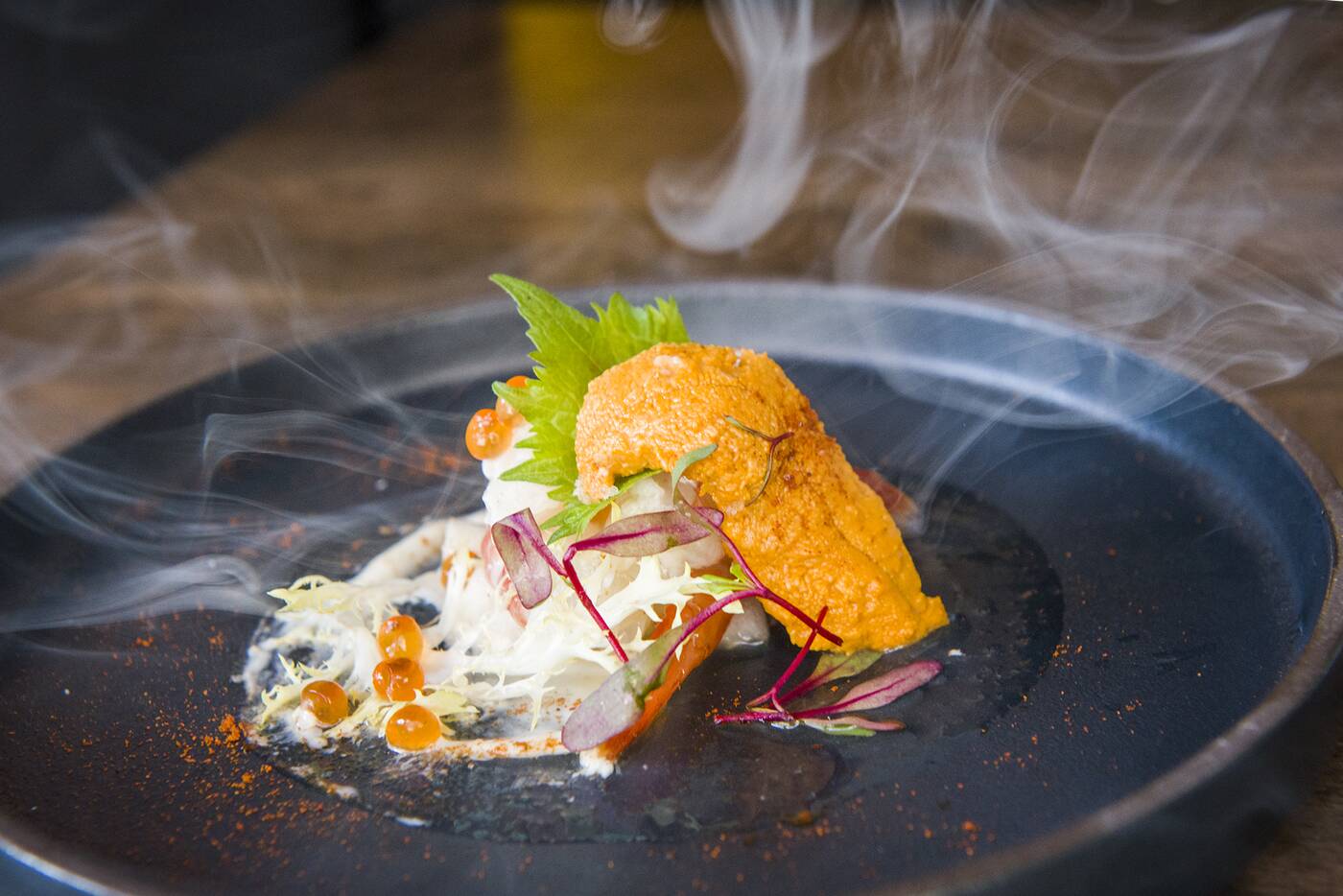 The theatrics are worth it – when the smoke dissipates, what's revealed is a small but beautiful plate: three pieces of sweet Japanese shrimp on a bed of diced Asian pears, accompanied by delicious ikura balls, two slices of rich uni, and a sprinkling of toasted paprika. 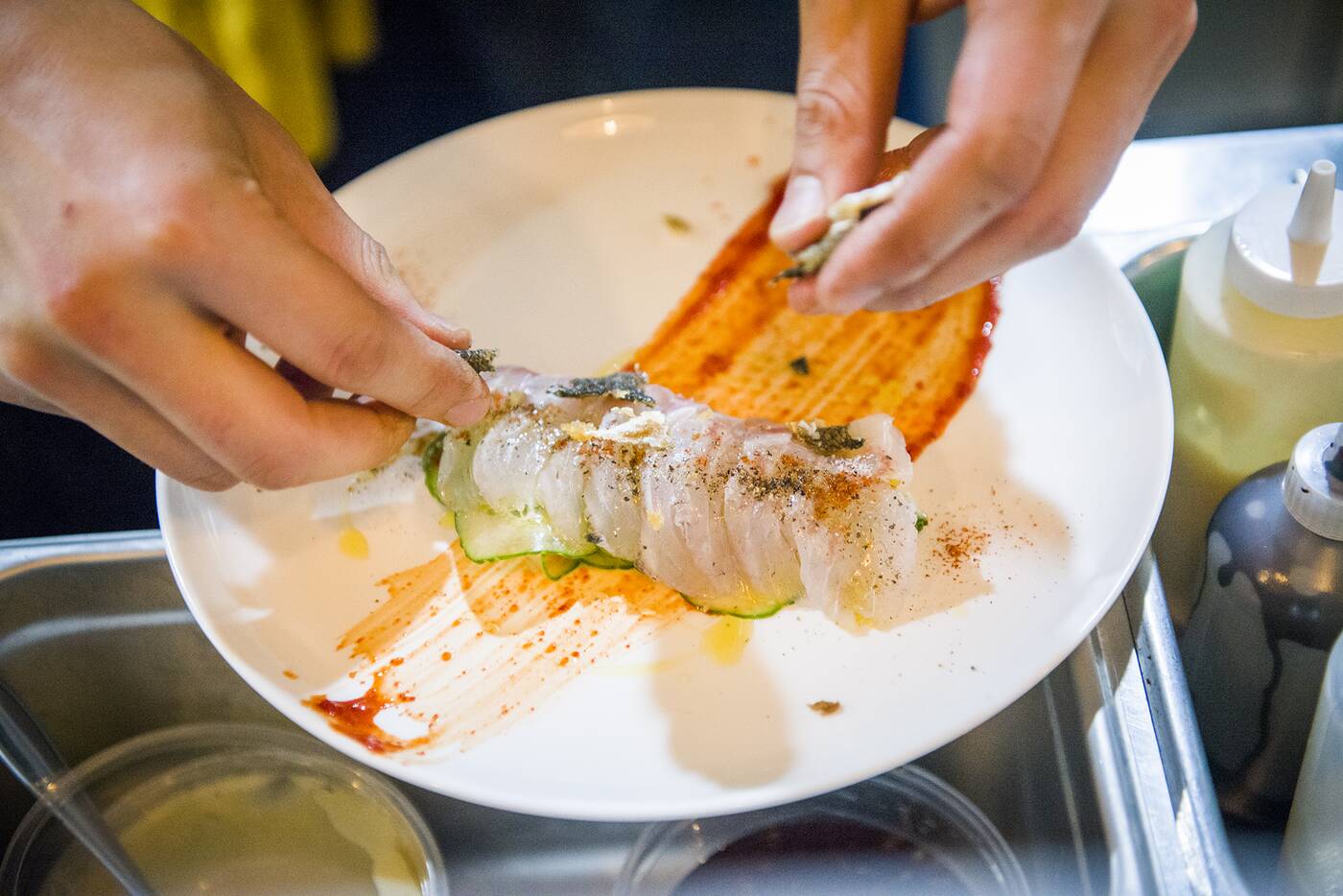 Seabass crudo ($17) is served with extra virgin olive oil on cucumber, sprinkled with herbs and topped with deep fried – excessively hardened, to be honest – fish skins. 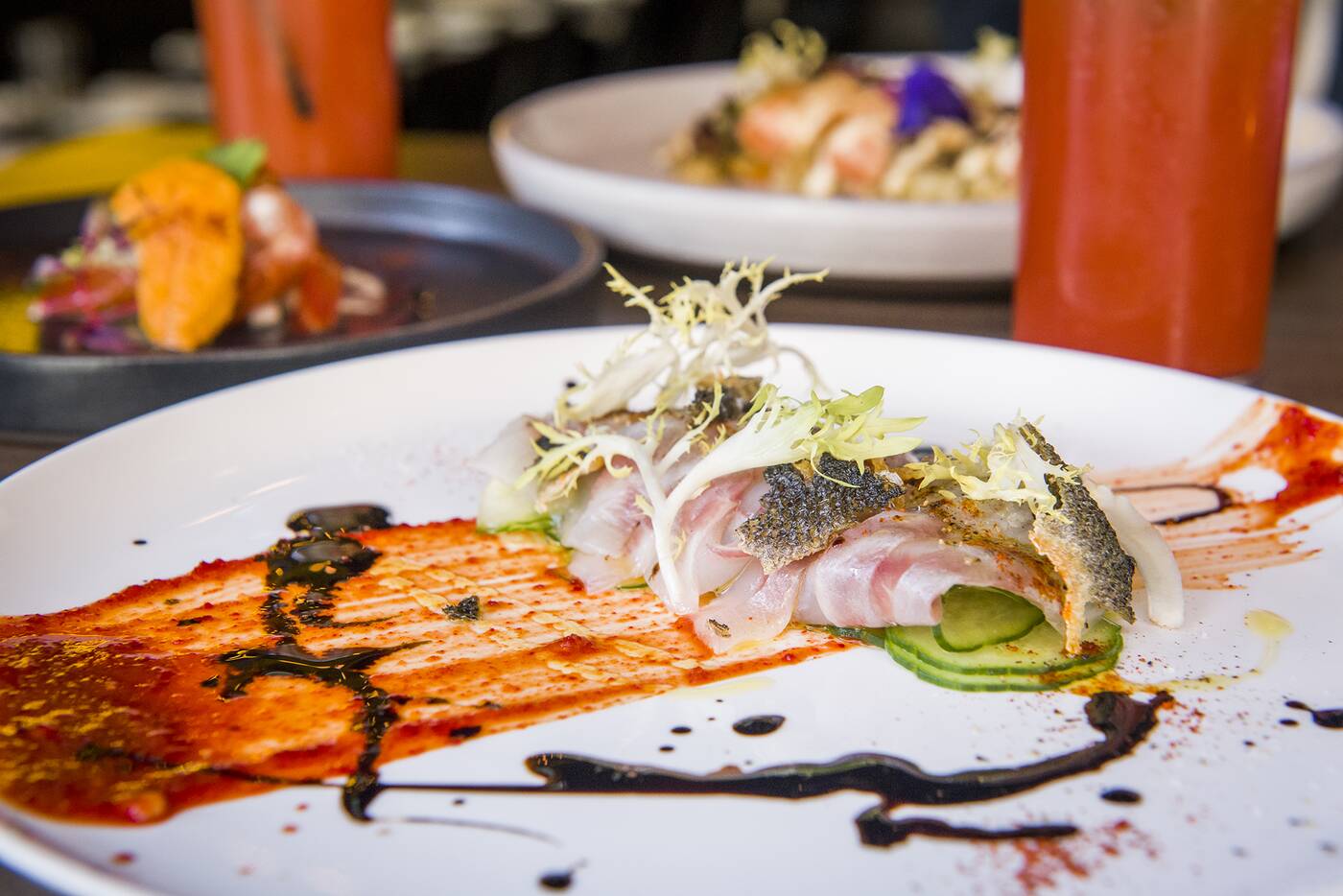 The plate is smeared with gochujang, adding an extra kick of flavour from the sweet Korean red chilli paste found at every Korean BBQ in the world. 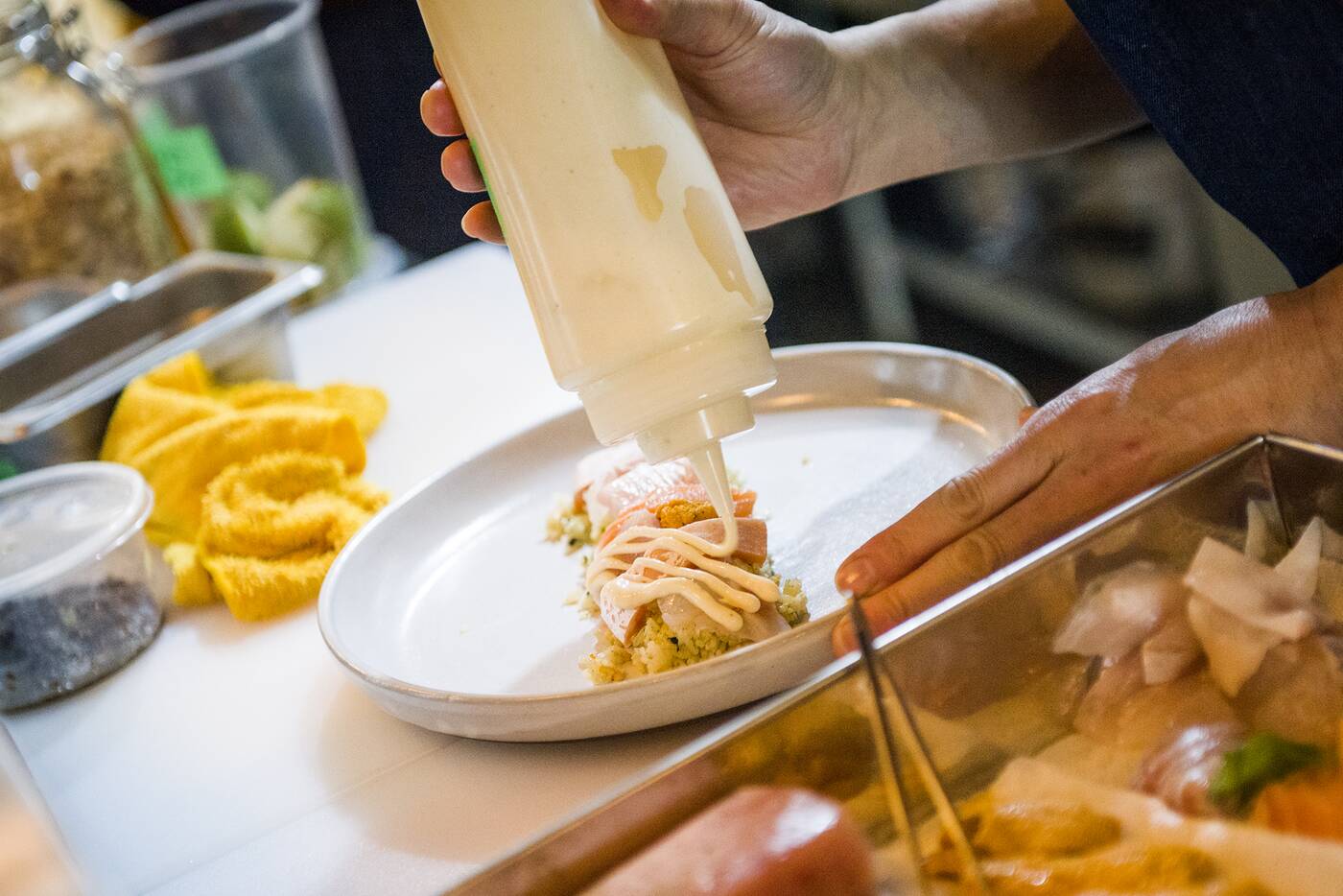 The aburi chirashi ($25) includes slices uni, seabass, tuna and salmon, mounted on sushi rice that's been mixed with tofu and lots – emphasis on lots – of truffle. 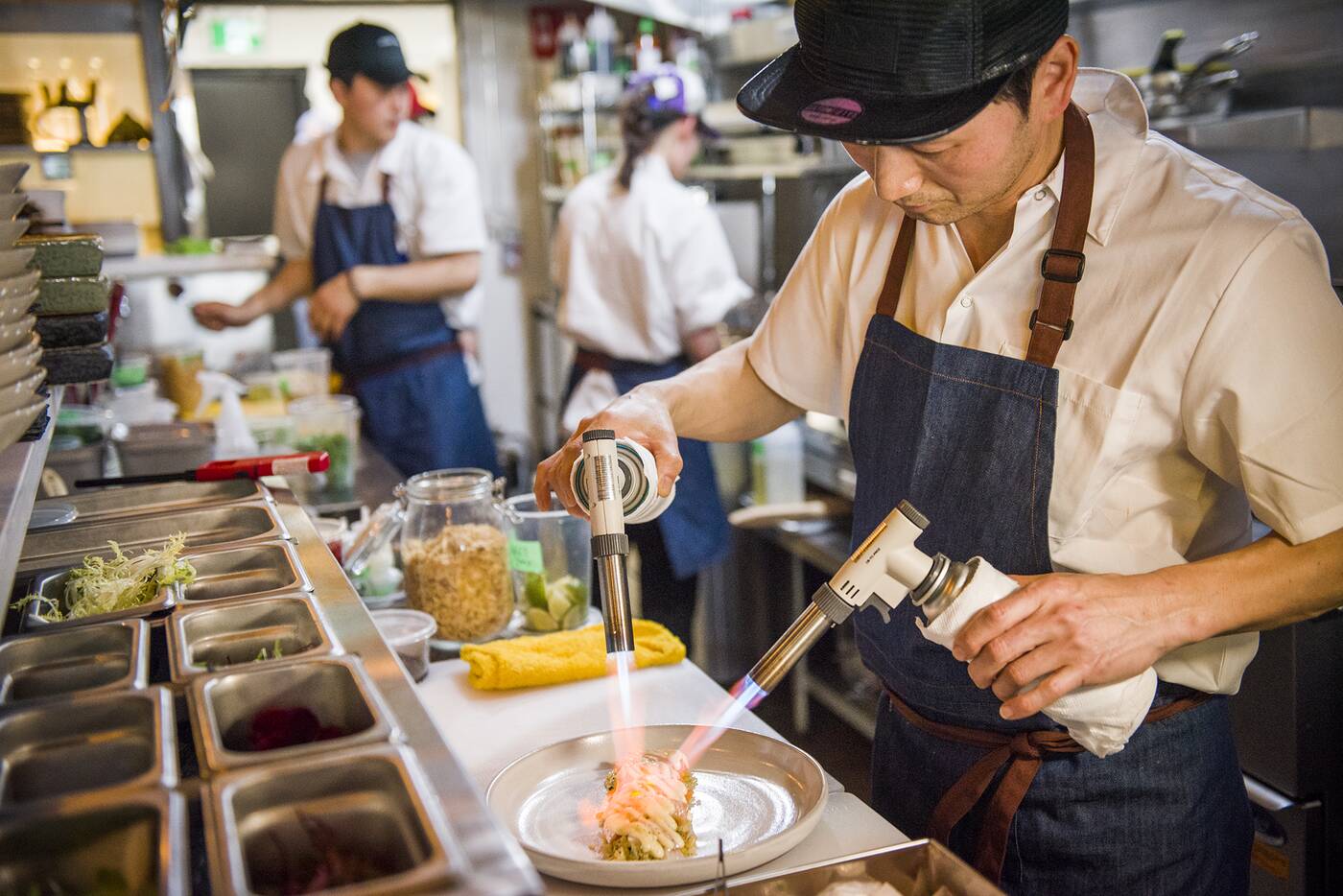 Topped with garlic mayo, it's seared for about a minute or less and arrives to the table with edible flowers. 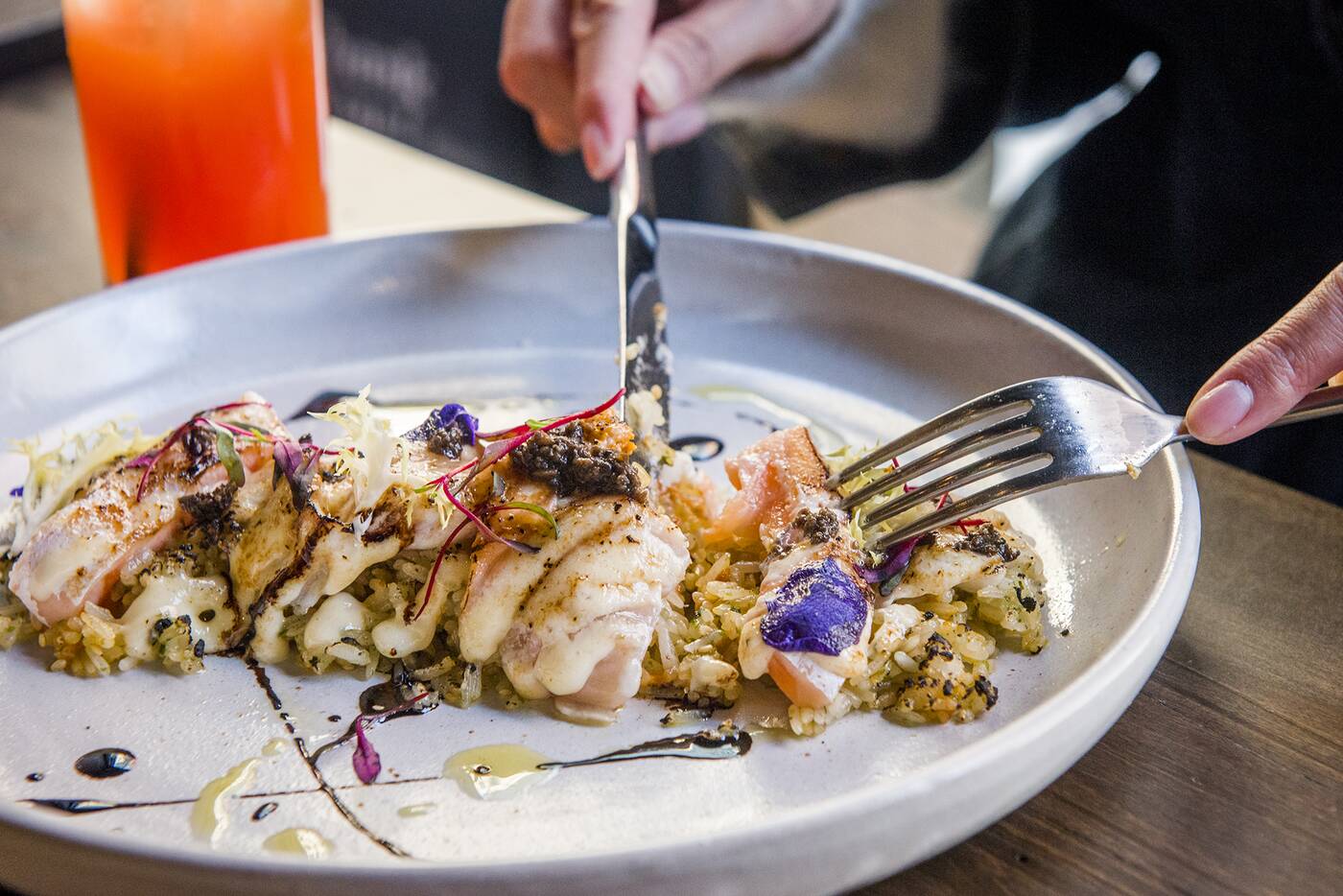 The fish is incredibly rich, boosted by the truffle and creamy mayo. The plate is decorated with ikura and shiso, which adds a nice touch of grassiness to the meal. 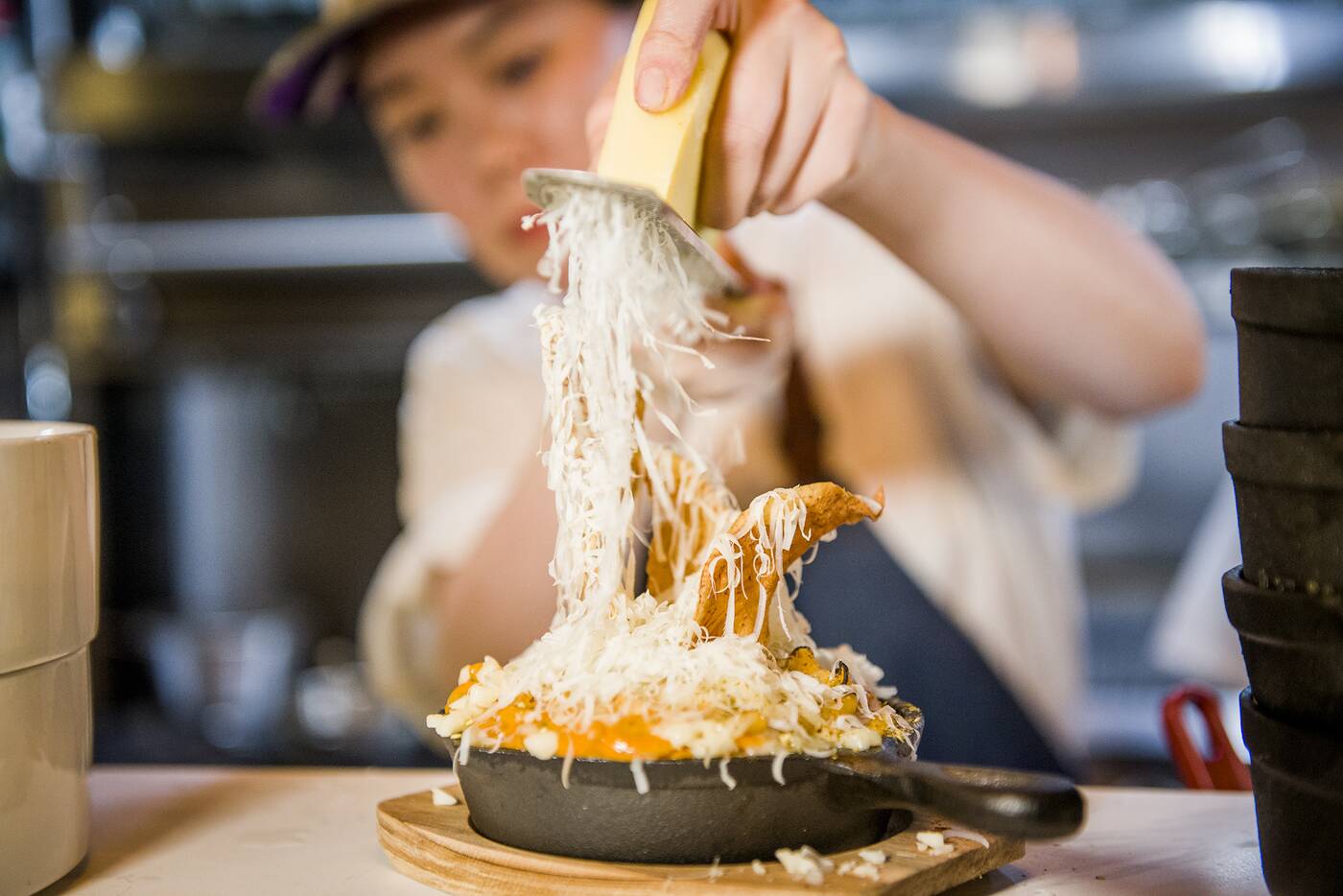 The undoubted star of the show is the Macbokki ($12), which combines the beloved American mac and cheese with the melty Korean rice cake dish, Dokbokki. Served in a skillet, macaroni noodles are doused in gochujang, provolone, gruyere, and smoked cheddar. 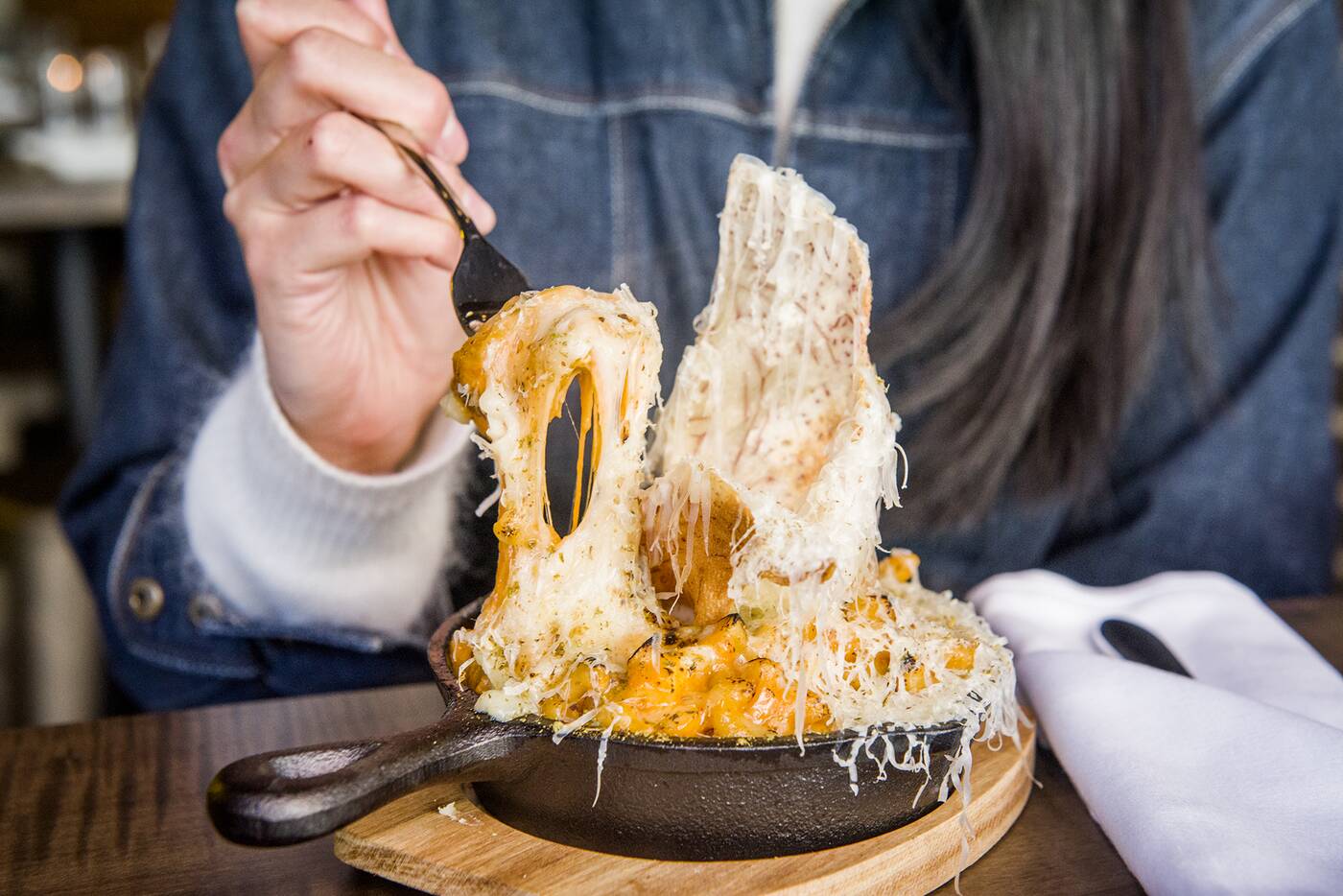 The surprise ingredient is za'atar, the oregano-based spice mix used in Middle Eastern cuisine. Served with giant taro chips, the East-meets-Wsest combination of these two incredible gooey concoctions together is truly the ultimate cheese dish. 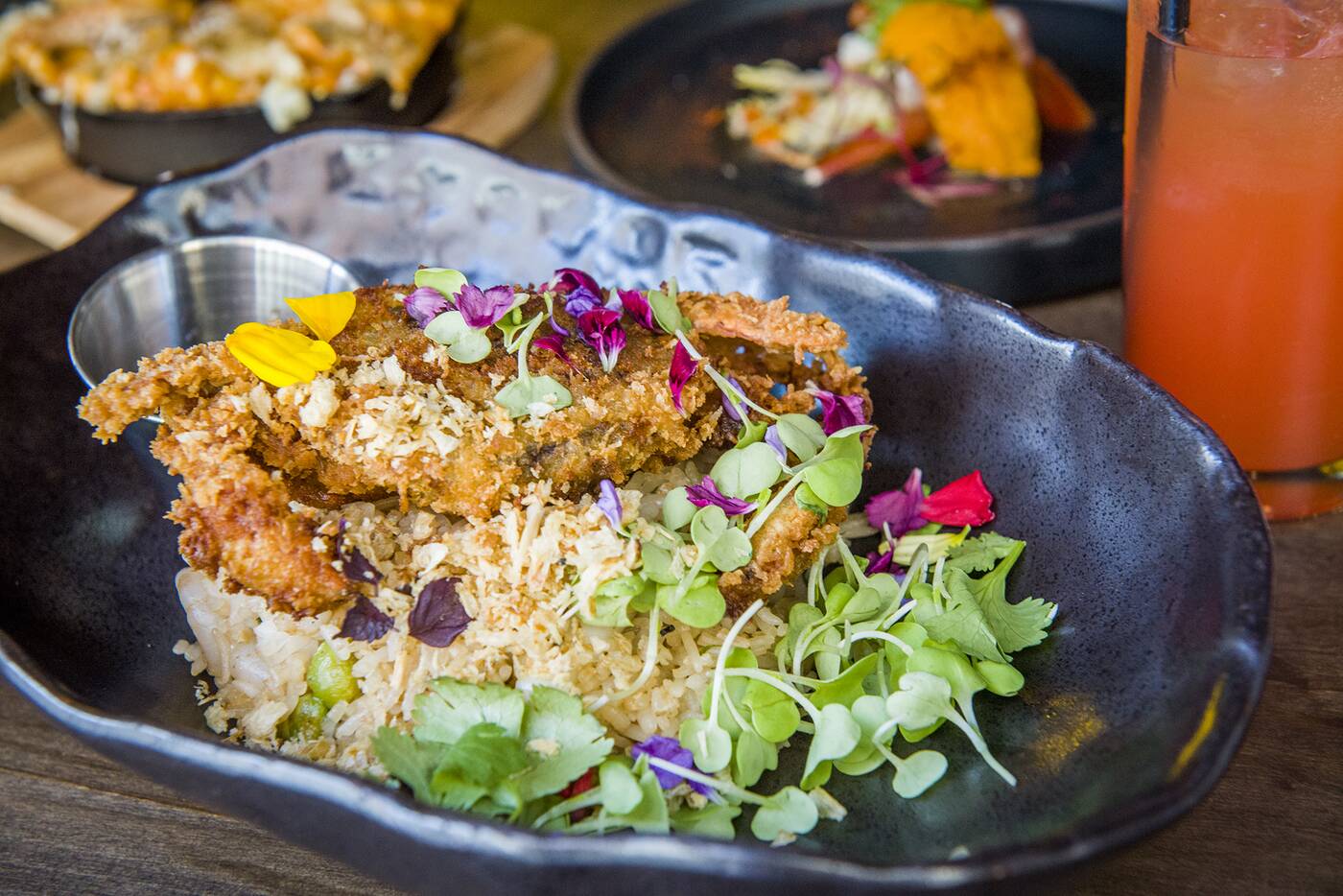 A soft shell crab dish served on jasmine rice called The Holy Crab! ($18) is so good it actually warrants the exclamation mark. A tasty whole crab that's soft enough to cut into is served with scallop, shrimp and squid and rice, and makes for a delicious portion of salty seafood. 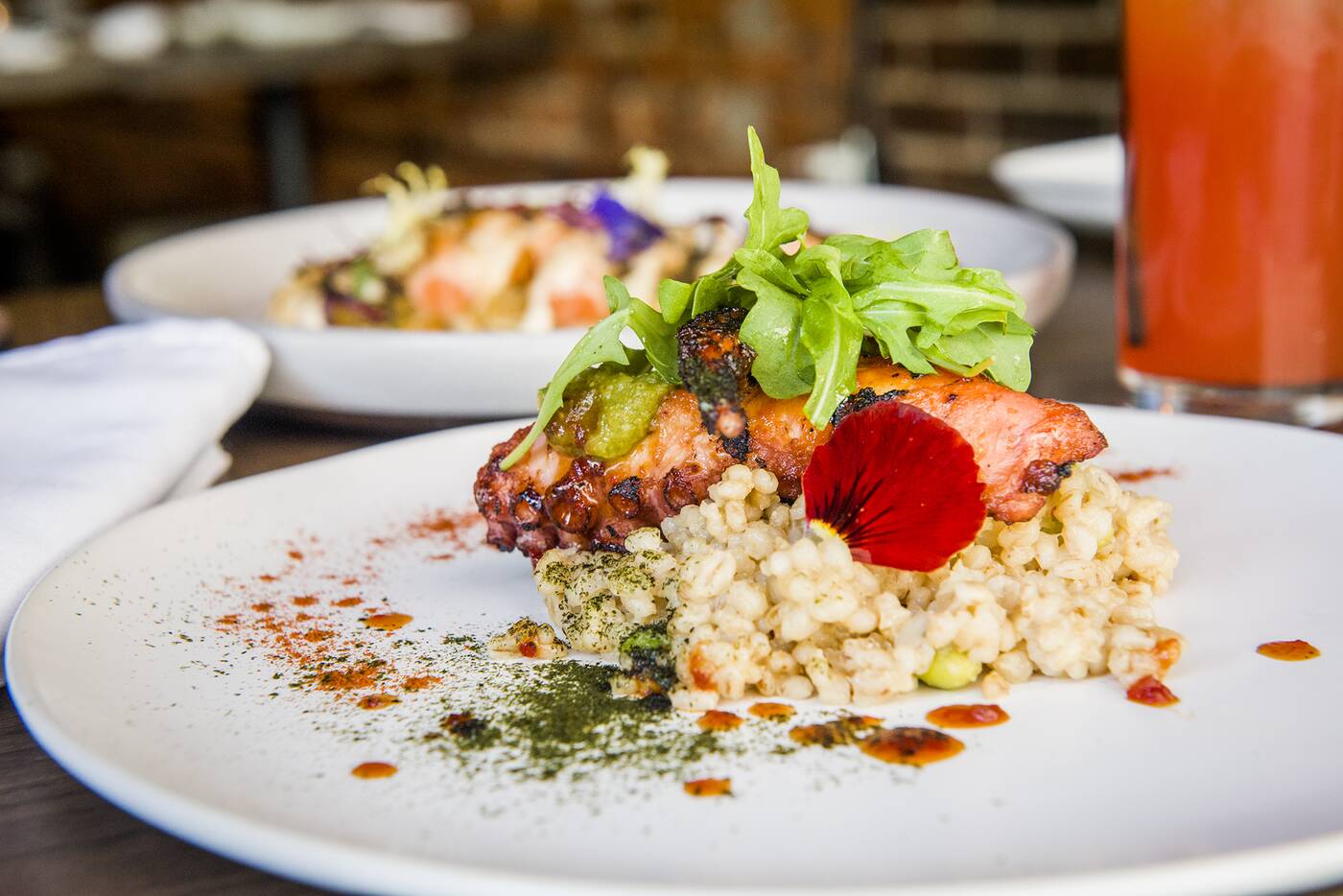 The tako risotto ($19) doesn't look too exciting at first glance, but it may be the most experimental of the bunch. 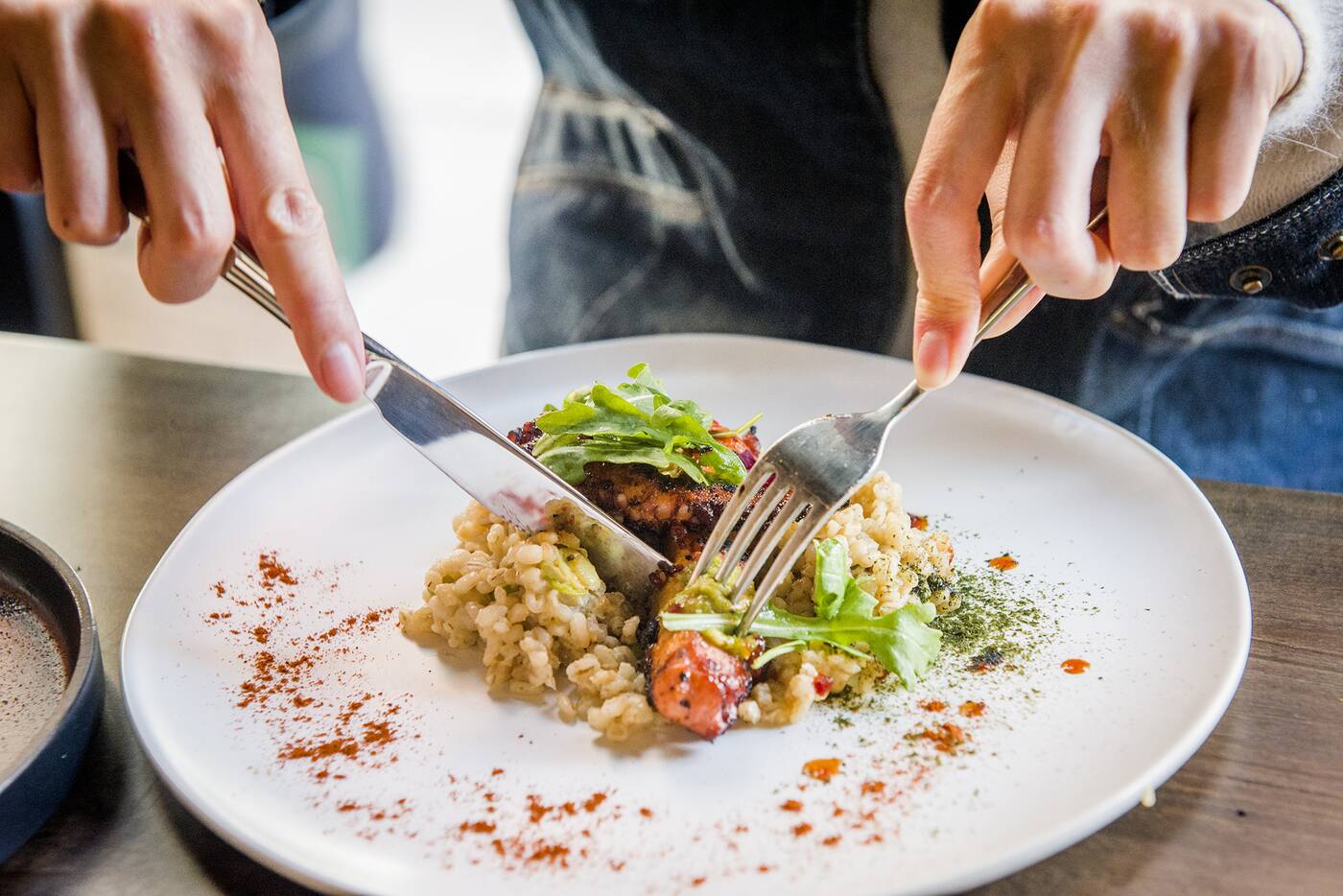 Octopus is served with watercress and jalapeno sauce on a bed of chewy barley, but without any cream or sauciness, there's a disconnect from the risotto label and  the dish leans more on the octopus as the main feature. 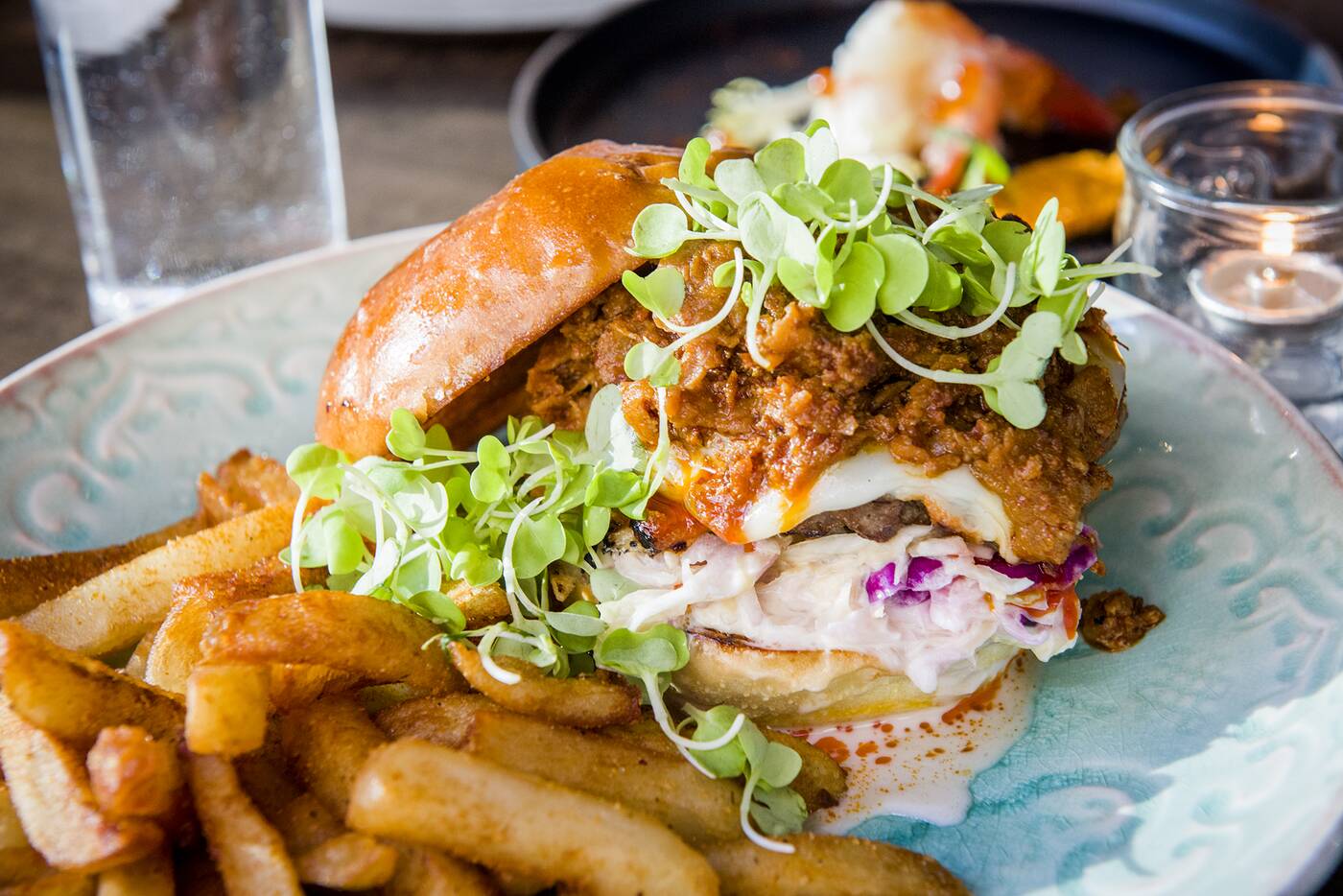 As a last minute add-on, the Immortal Burger ($15) arrives on a brioche bun with spicy pork and flat iron bulgogi. The flavourful pork sits on the bulgogi patty for a handful of mozzarella-cheesy mess. The surprise here is that the thick cut spiced fries steal all the shine. 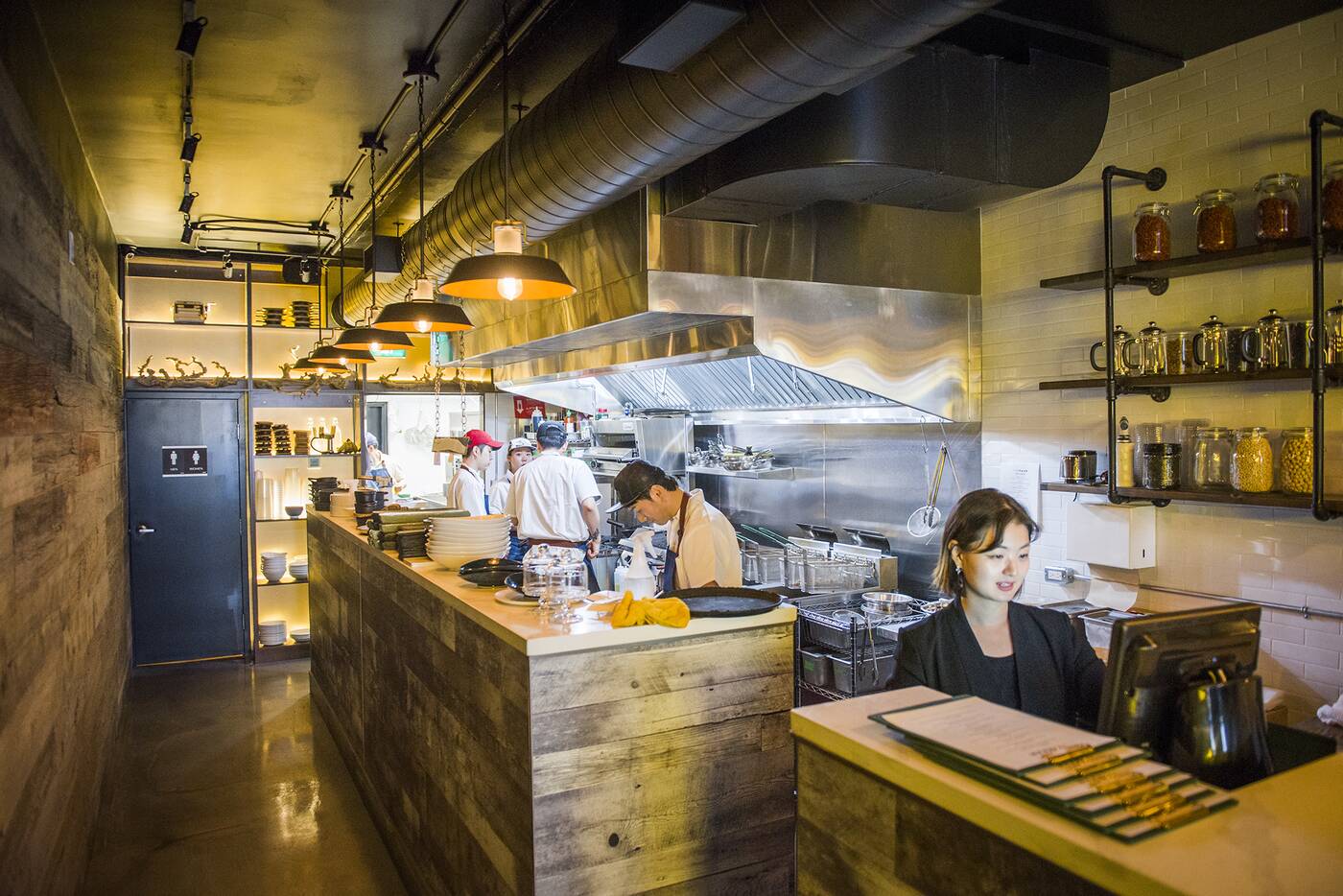 It's unlikely you'll feel completely stuffed after a meal at the Haam unless you order two to three dishes for yourself, but it's all about sharing here. Splitting meals with your dining partners is likely the best way to get the full experience. 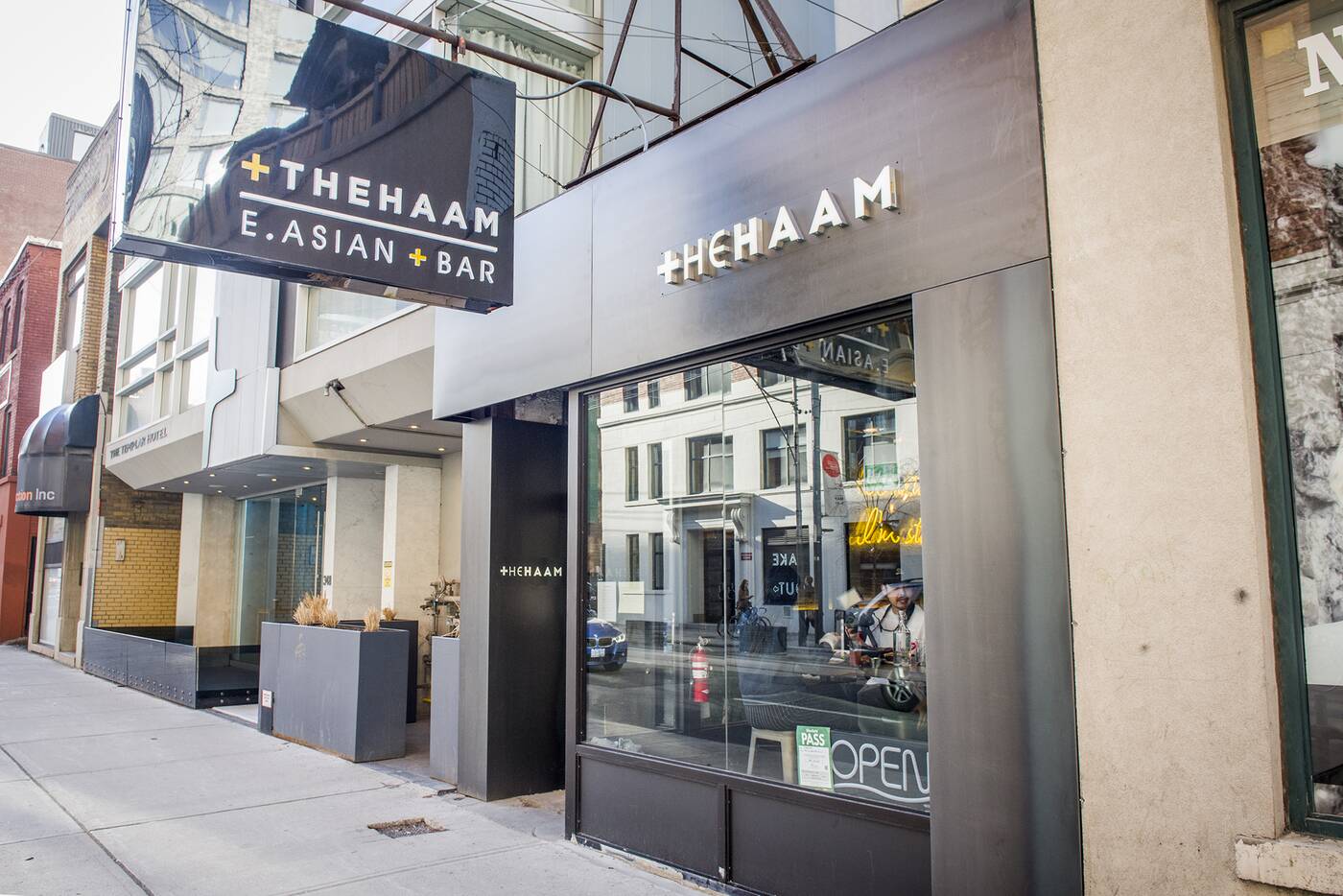