Xiang Long Zhua Zhua, or XLZZ, is a tiny stall that specializes in Sichuan-style chicken feet.

If you've never had the opportunity (or the will) to try this dish at Chinese dim sum, where it's most commonly found, you might feel more inclined to try it at this tiny takeout counter at Northtown Way plaza. 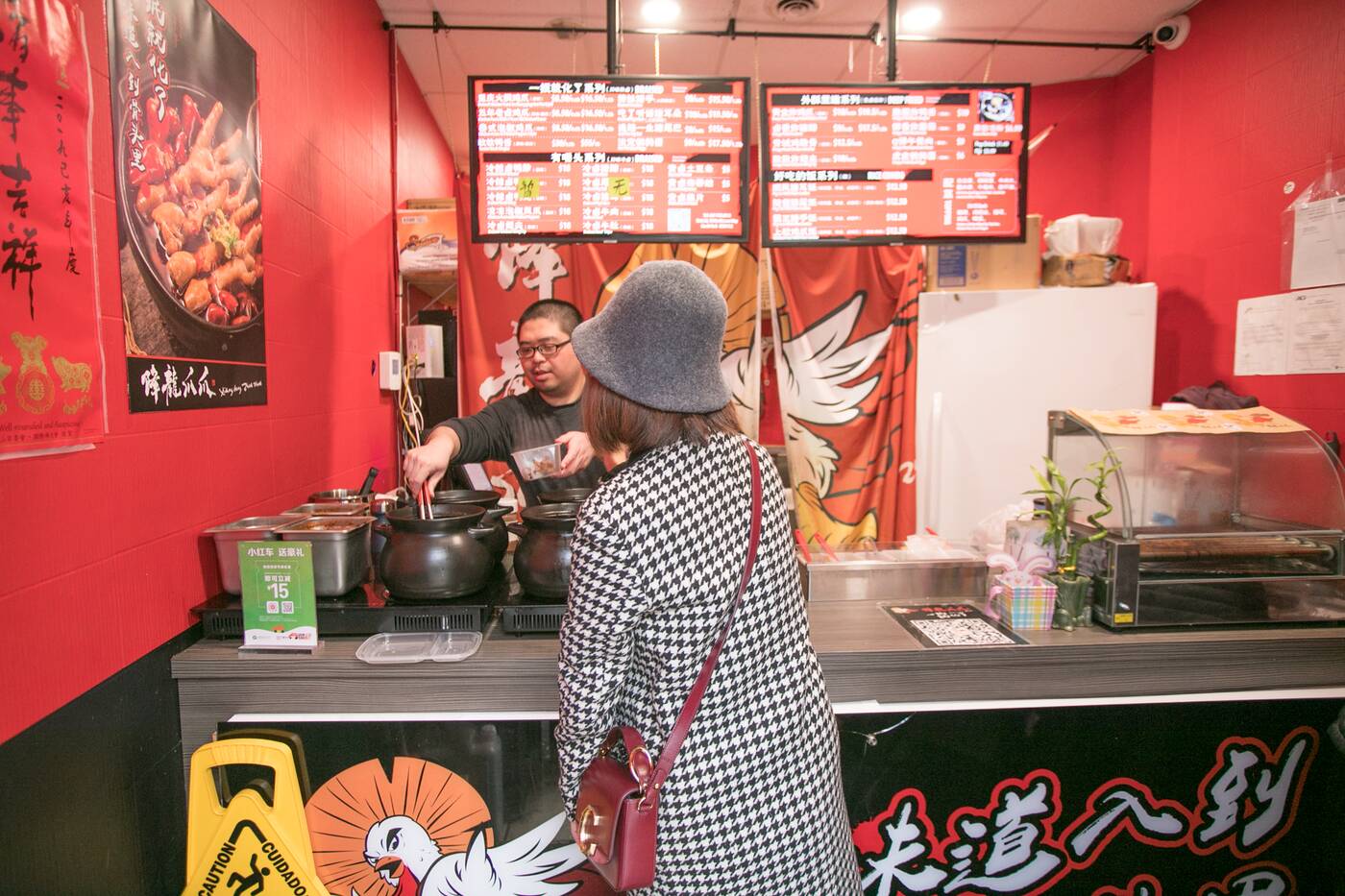 While rarely seen in the North American diet, chicken feet dishes are actually immensely popular around the world, with recipes ranging from Eastern European to Caribbean cuisine. 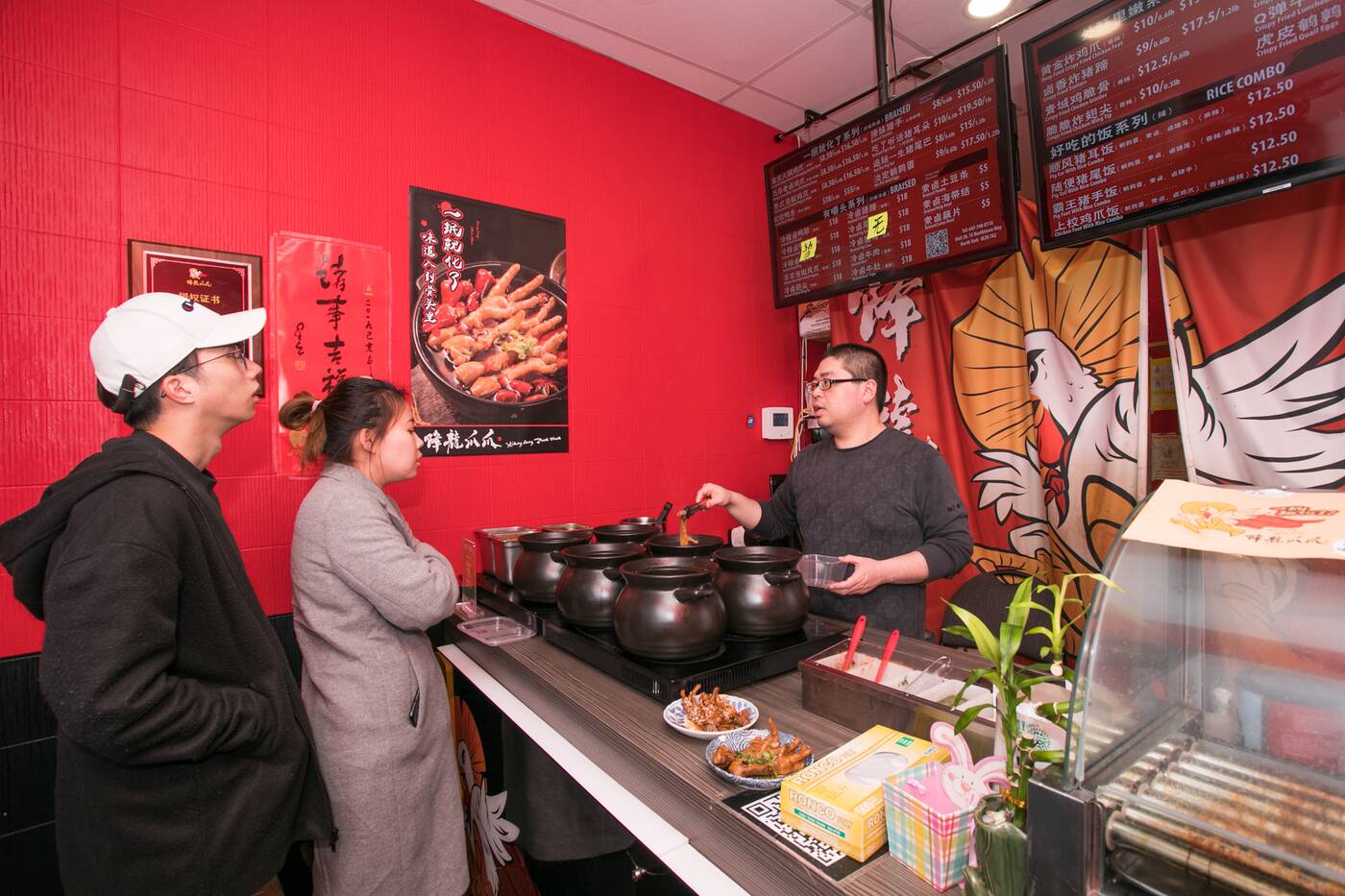 The demand in China is especially intense (there are ongoing shortages of it due to demand).

This cramped little box marks the first Canadian location of a giant global chain, which has exploded across Asia with more than a thousand locations since it first launched in 2015. 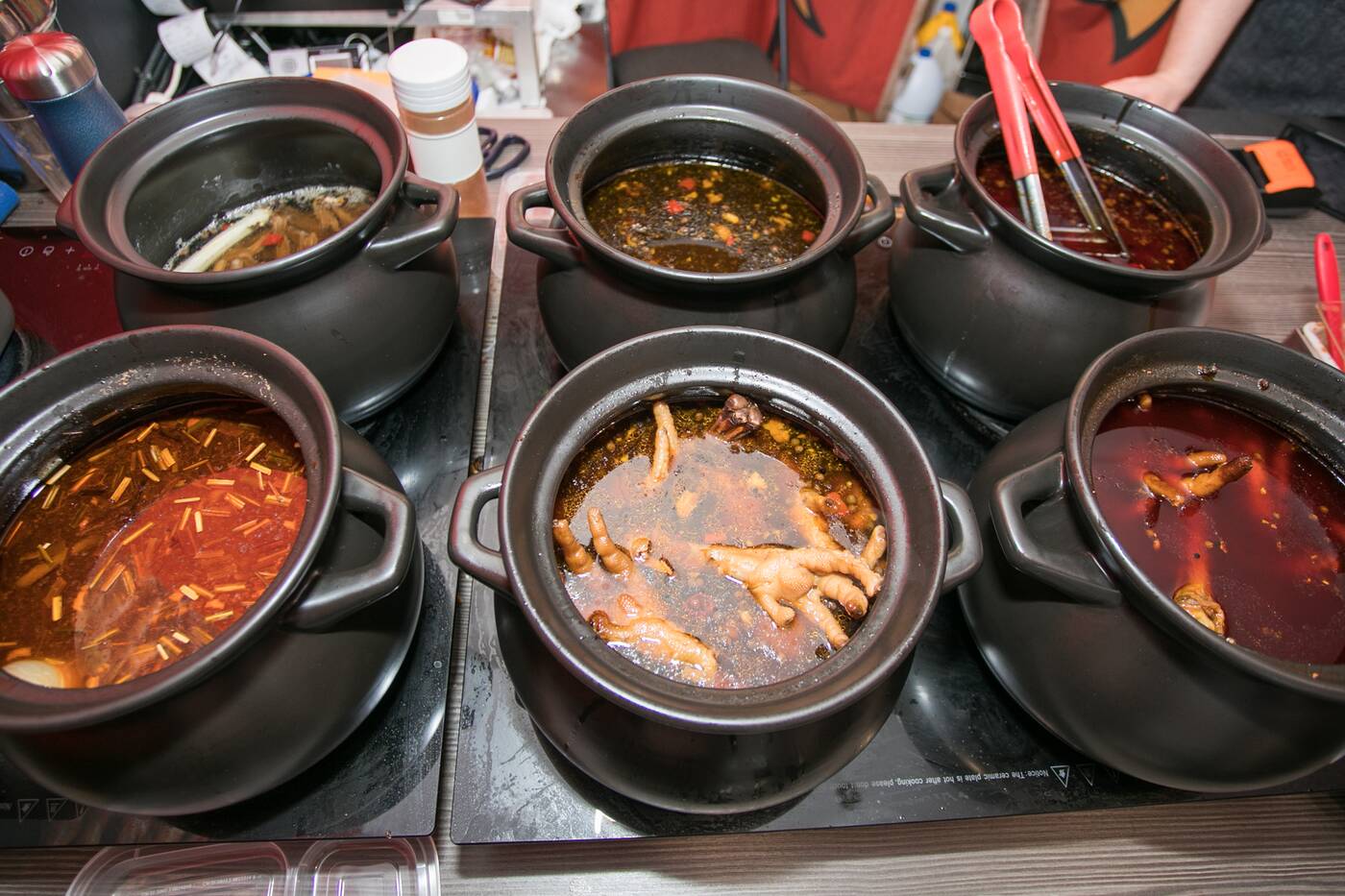 Squeeze into the space and you'll come face to face with pots of chicken feet simmering on burners all day long. 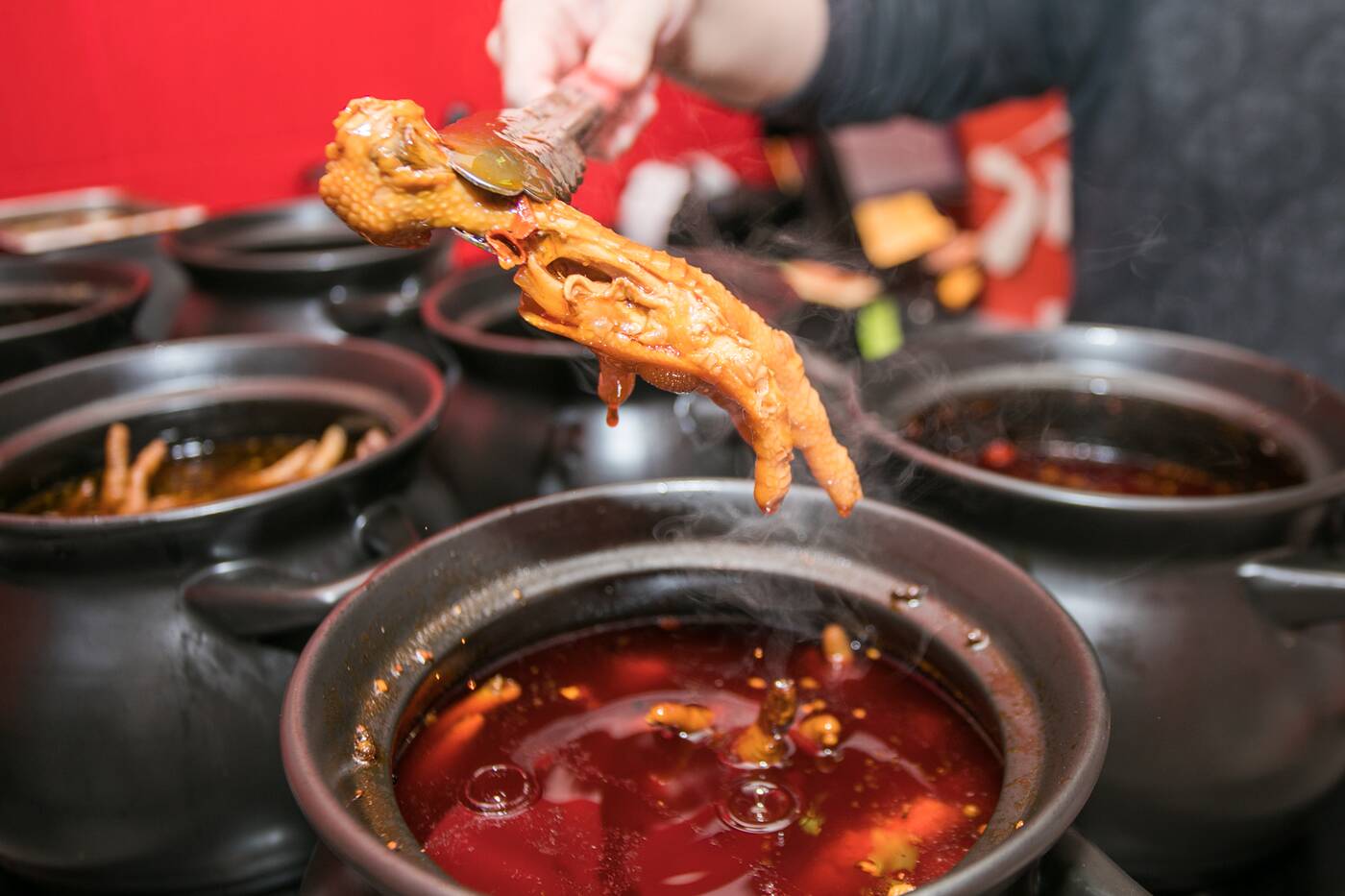 The braised chicken feet come in several flavours, like a tangy, tom yum-inspired pickled pepper sauce. It's $8.50 per 0.6 lbs, which comes up to around 3 feet per order. 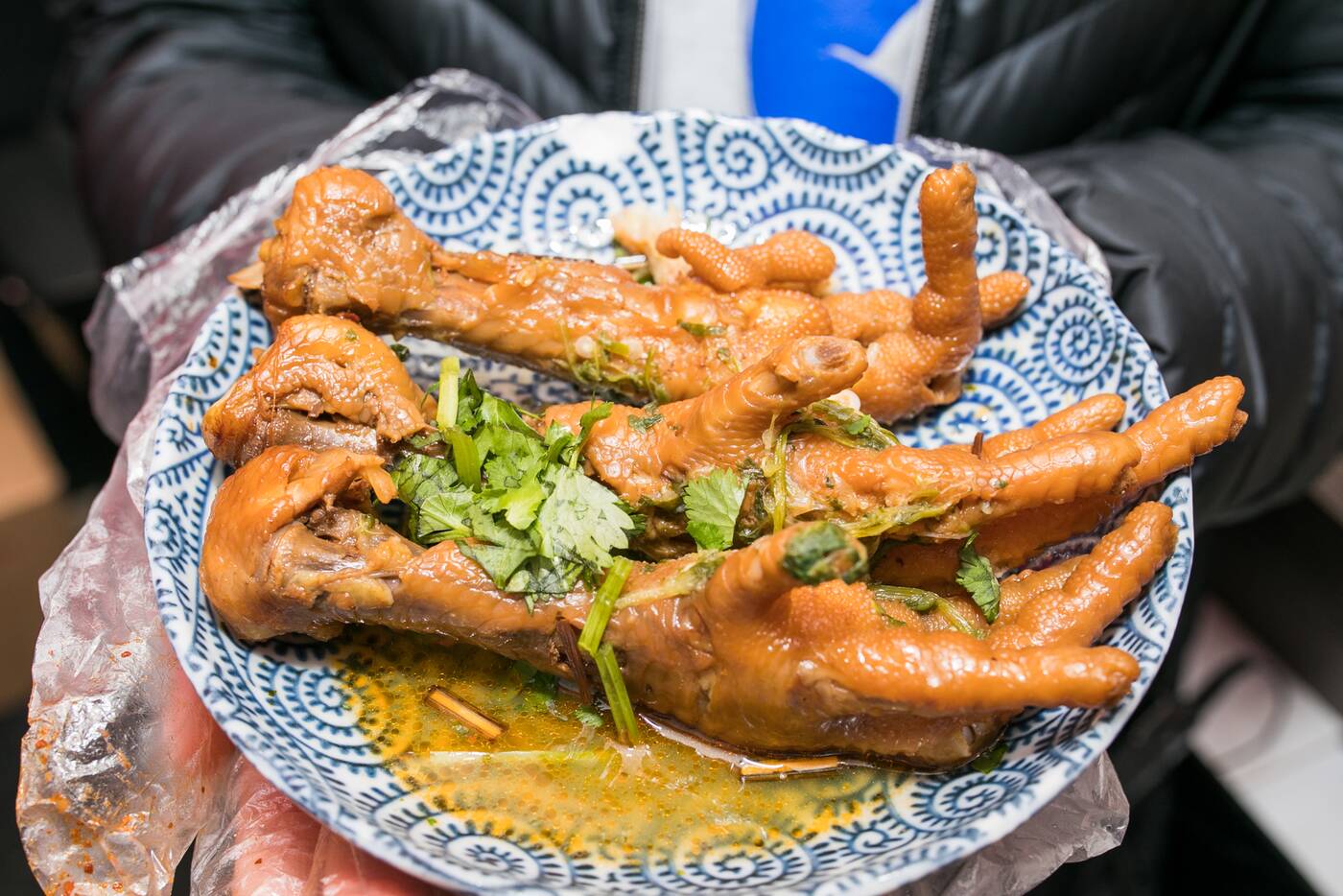 These feet are much bigger than the ones you'll find at dim sum. For rookies, it should be noted there's a specific technique to eating chicken feet: throw on your disposable gloves, bite, suck the glutinous bits off the bone, then spit the small joint bones out. 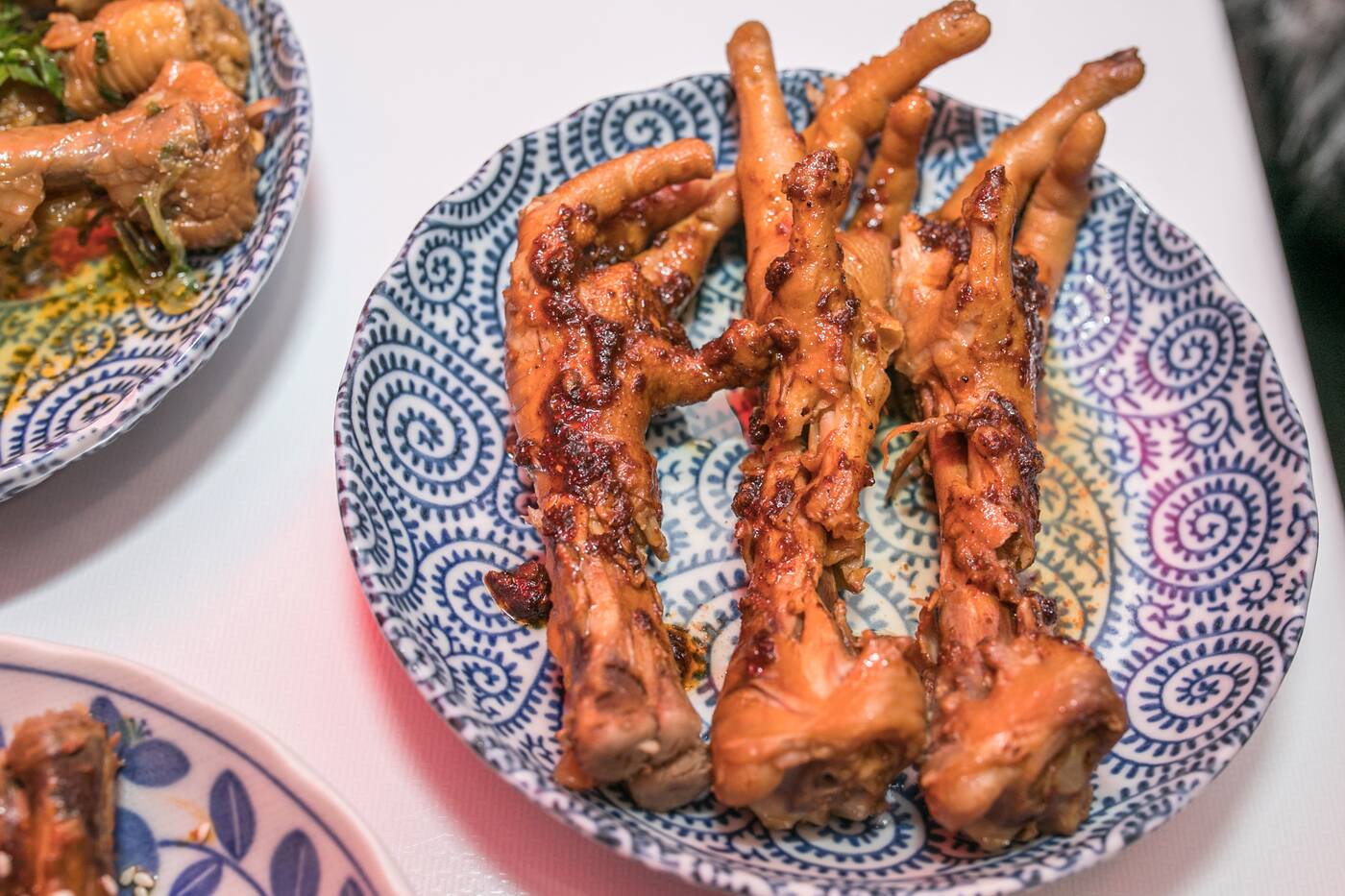 The Chongqing hot pot-style feet are braised in a soup with a slew of different spicy ingredients like Sichuan peppers and peppercorns. 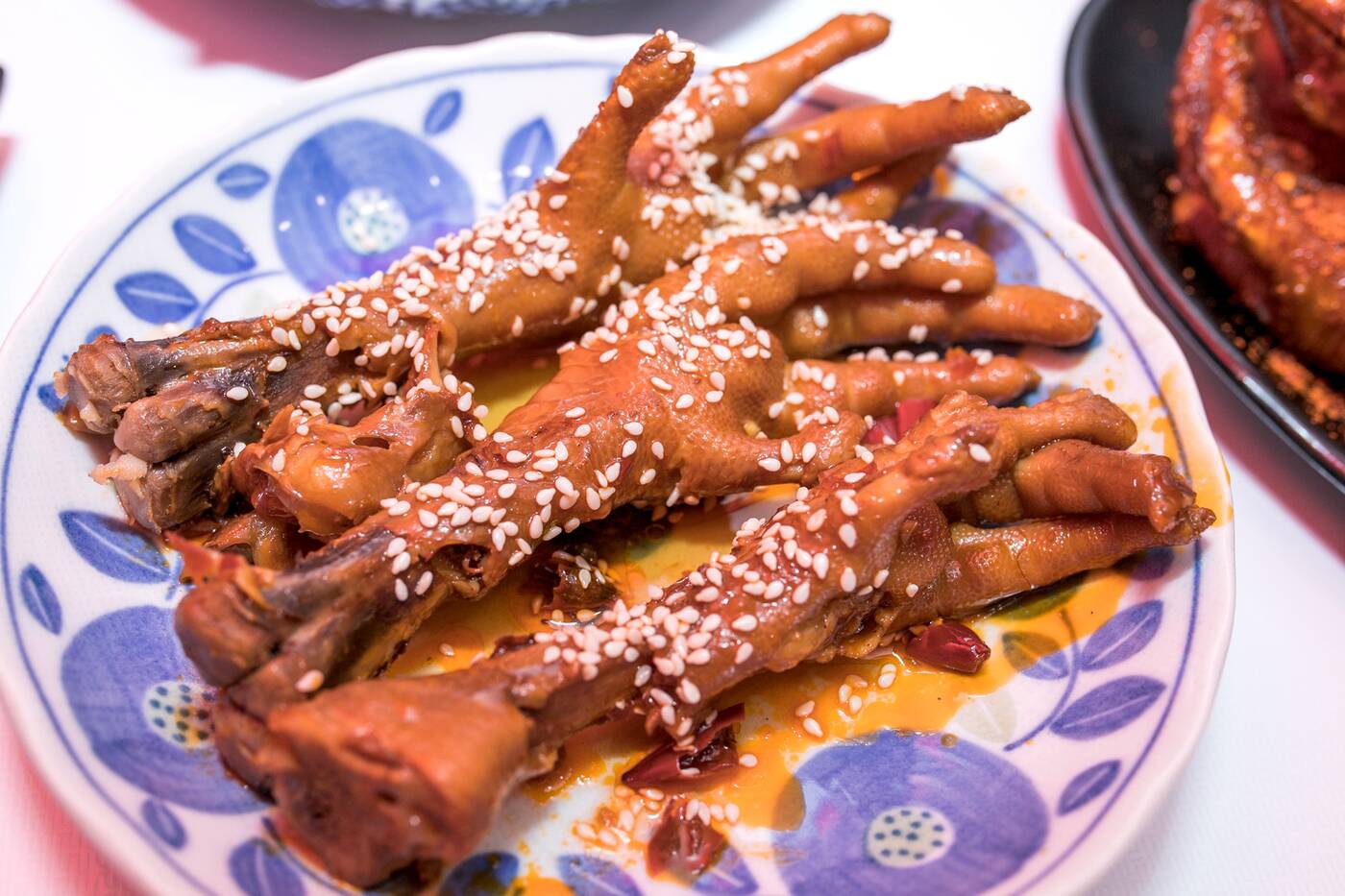 A "5 years old" braised sauce is the least spicy out of all the braised options, though it still does have some kick. 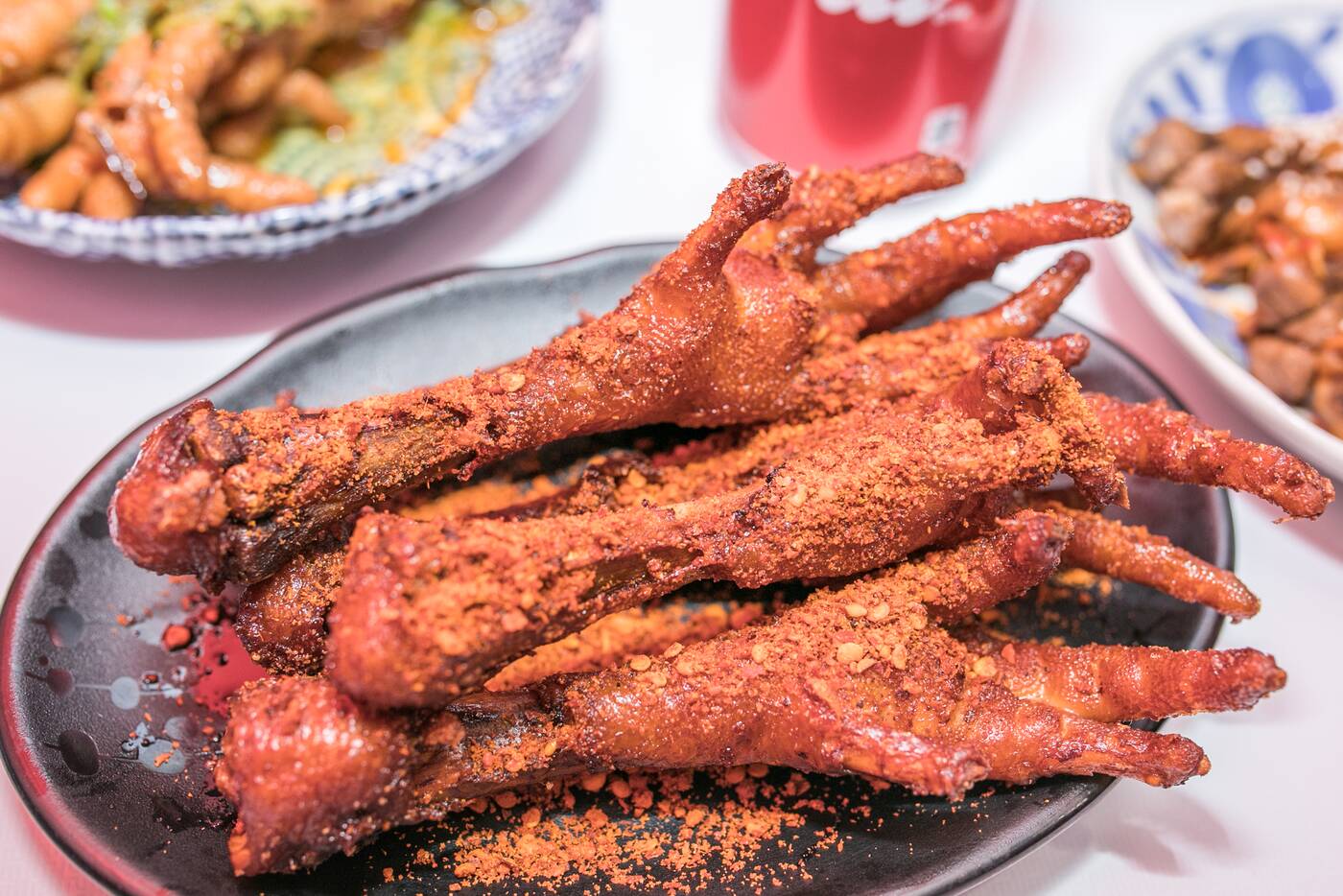 For those who are just trying chicken feet for the same time, I recommend opting for a deep fried version instead, which costs $10 per order.

You'll still have to spit out the little bones, but the texture is a lot less jelly-like, which tends to be what throws people off, and feels akin to deep fried chicken wings. 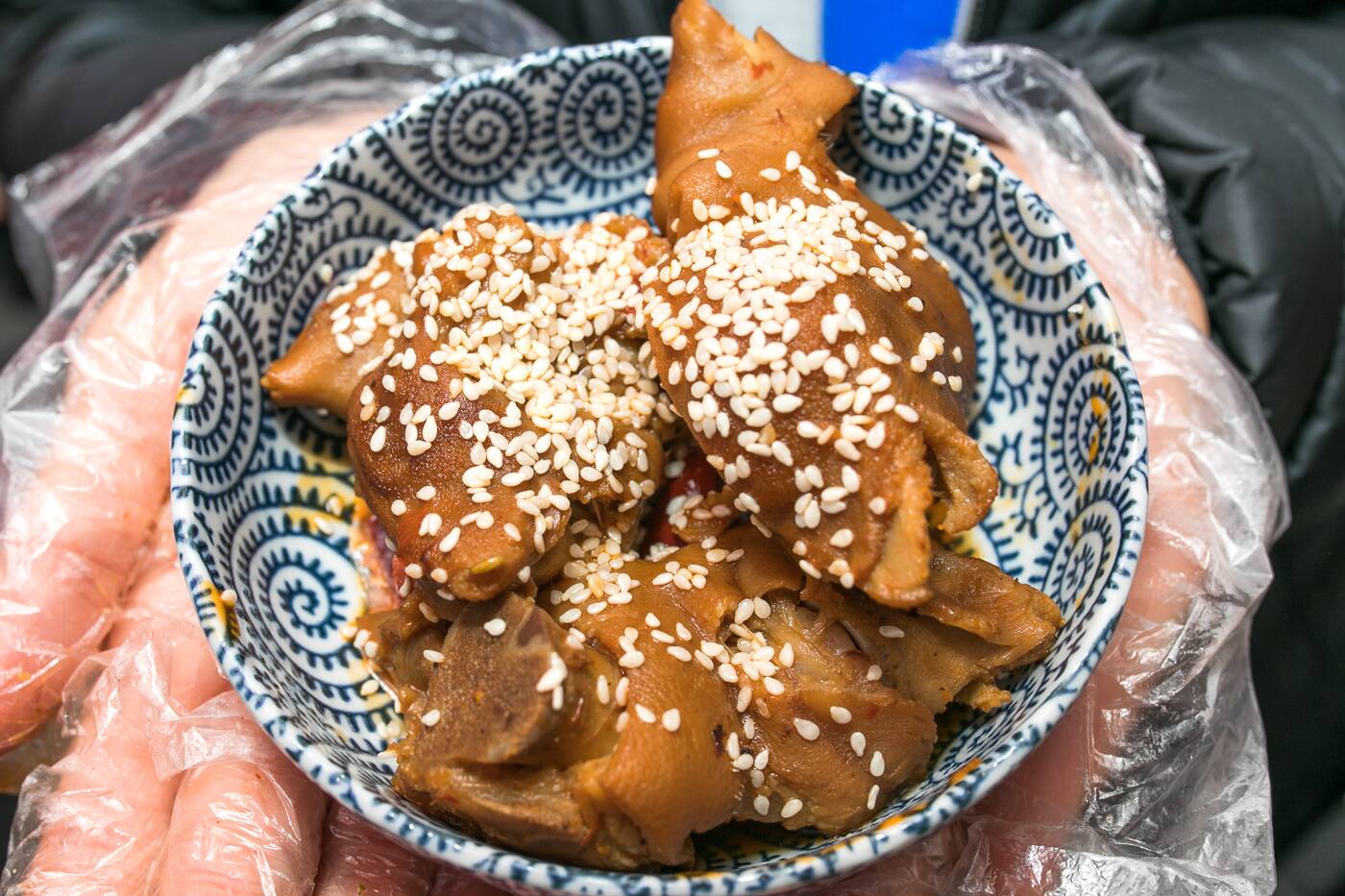 Other uncommon animal bits include braised trotters for $8 an order. Pig's feet, or pettitoe, is especially popular in Italy, though it's cooked quite commonly in Asia. 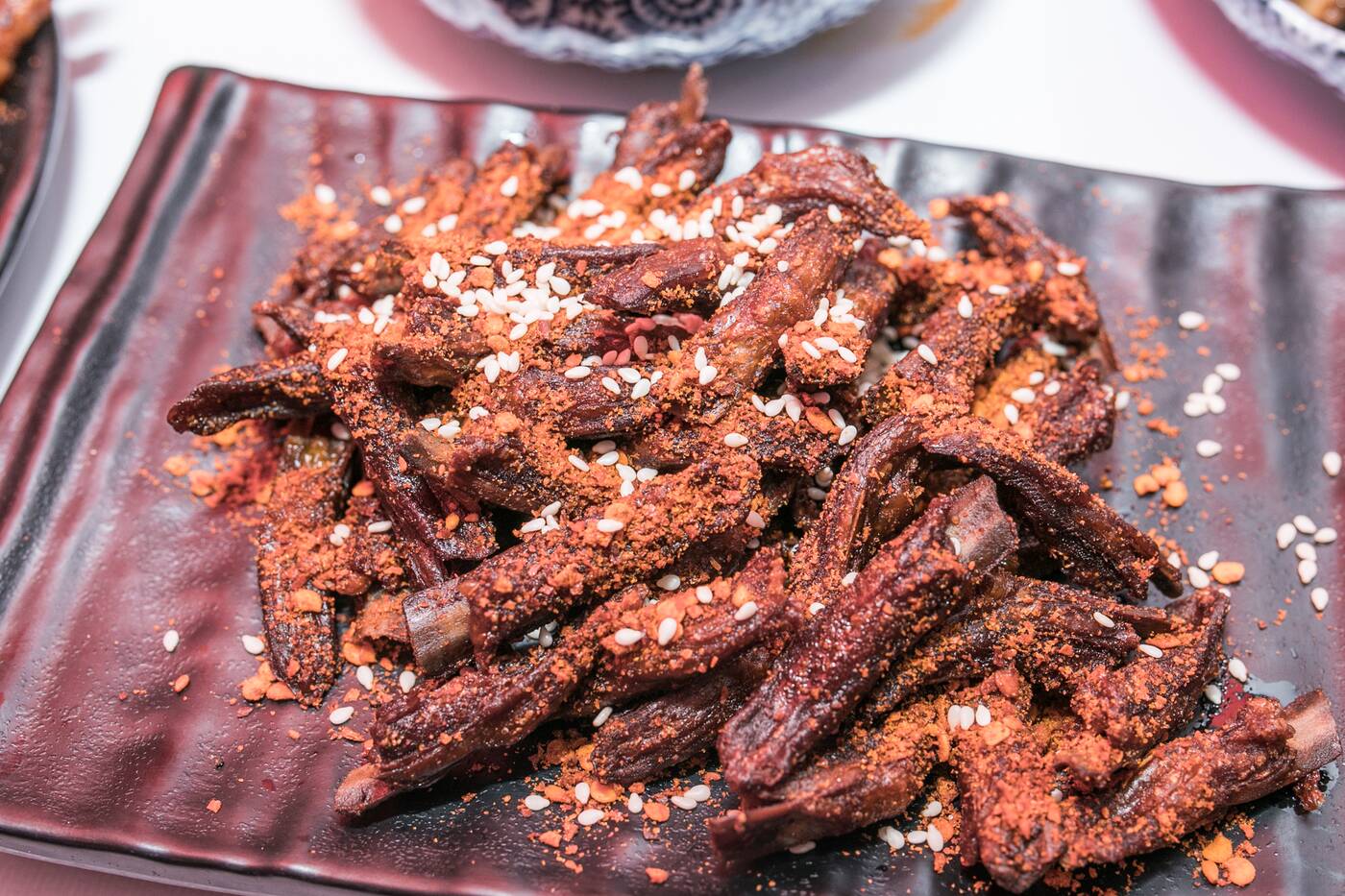 Crispy fried duck tongues ($19) are easy to pop back with a can of coke, and make for great drinking food if you want to take it home and have them with a bottle of beer. 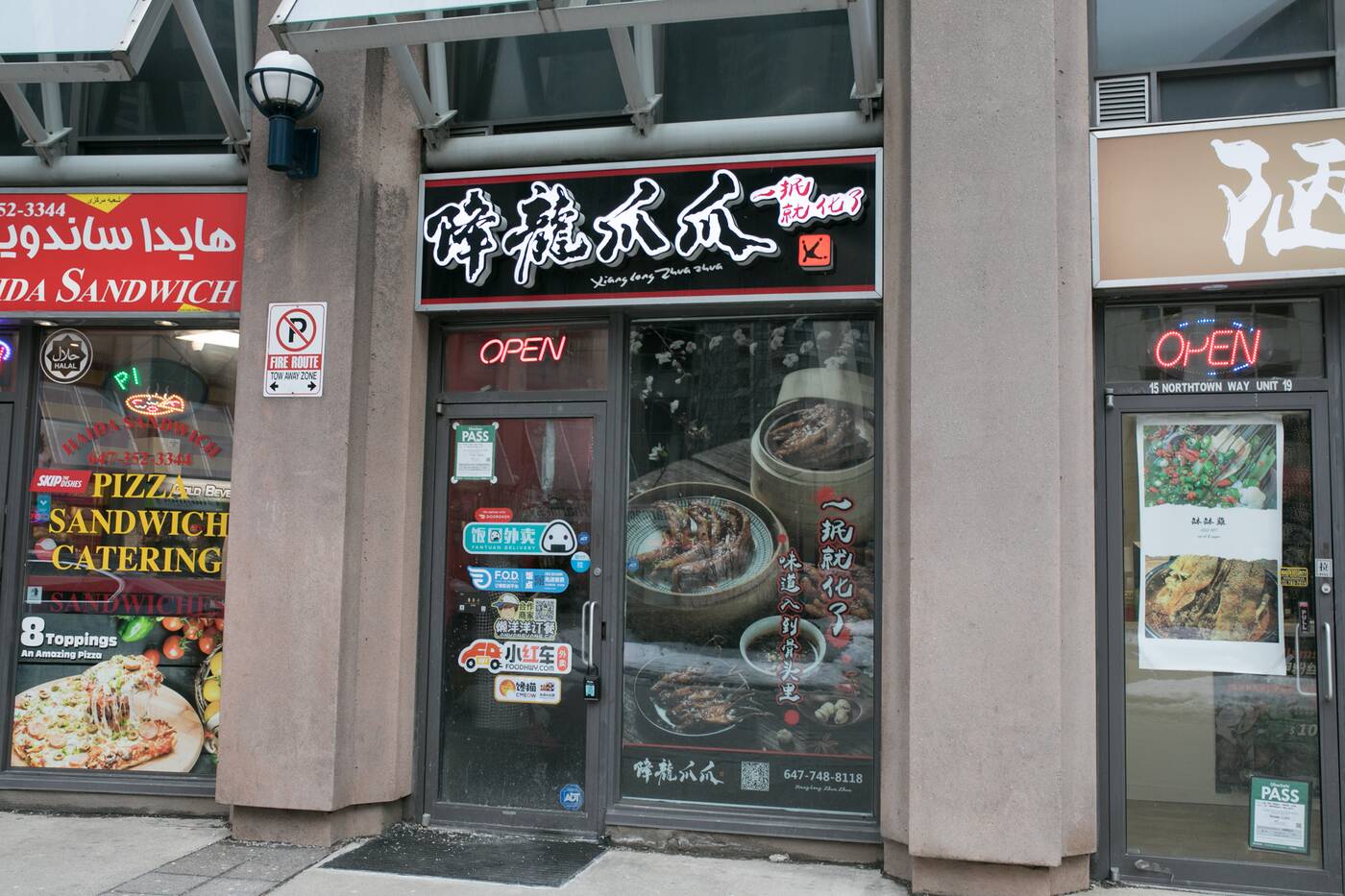