Shameful Tiki Room is currently open but their offerings and services may be affected due to the pandemic. Please contact the business directly for more information about any changes. Is this your business? Please contact us if you would like to update this message.

Shameful Tiki Room is a genuine time machine. While I've covered the relative lack of options for a Tiki experience in Toronto before, I haven't really spelled out how exacting a standard is required for "authentic" Tiki.

Authenticity is something of a misnomer when it comes to this particular subculture, anyway, as the whole trend grew in the post-war years as former soldiers, returning from their posts in various exotic parts of the Pacific seas, yearned for a re-creation of the experience. 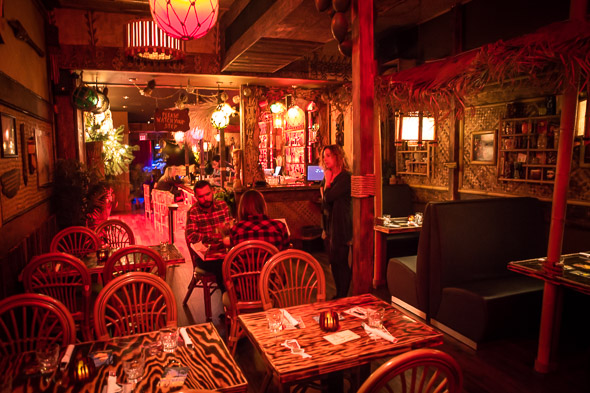 Two competing businessmen rose to the fore in response: Donn Beach and Trader Vic, who opened bars based upon an imprecise (and frankly bizarre) approximation of the South Pacific culture. Their bars became legendary spots in 1940s Los Angeles.

Tiki enthusiasm has surged in the last five years, with some of the most revered bars in the world embracing the respective philosophies of Don and Vic. Although the era has provided inspiration for many tropical-themed spots in Toronto over the years, including recent additions Miss Thing's and The Shore Leave , an accurate re-creation has not existed for some time.

Step forward Rod Moore, whose painstakingly detailed lounge in Vancouver has proved a massive hit for Tiki fans. Looking to expand into an increasingly rum-thirsty Toronto, he's partnered with ex-Harbord Room bartender Alana Noduega to build an outpost on the west side. 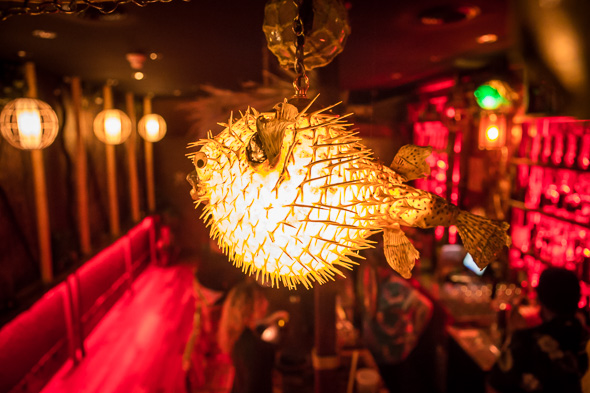 The dimly-lit room is decked in bamboo and wicker. Packed with neat touches, not a thing seems out of place - from the straw roof over the top of the bar to the inflated pufferfish lamps. The windows are blacked out to prevent any vestige of the real world from creeping into this micro-paradise. 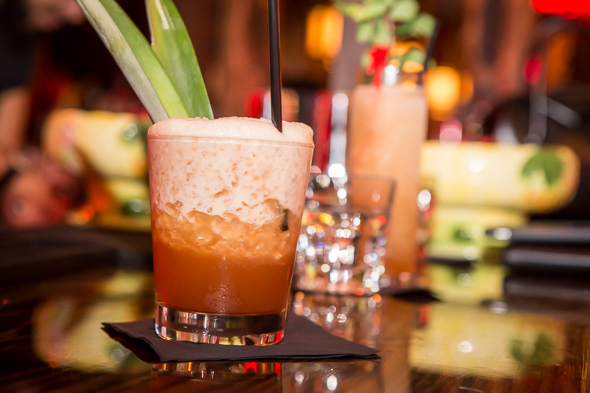 Cocktails endeavour to replicate the original drinks from the era - although we're assured that a few new recipes will be appearing over time. We start with a Jungle Bird ($12), which is sort of an odd duck in the Tiki compendium in that it actually hails from the Kuala Lumpur Hilton, and wasn't invented until 1978.

That said, it's been recognized as worthy of inclusion by Tiki fans. Mixing rum, Campari, pineapple and lime, it's a great balance of bitterness and acidity. 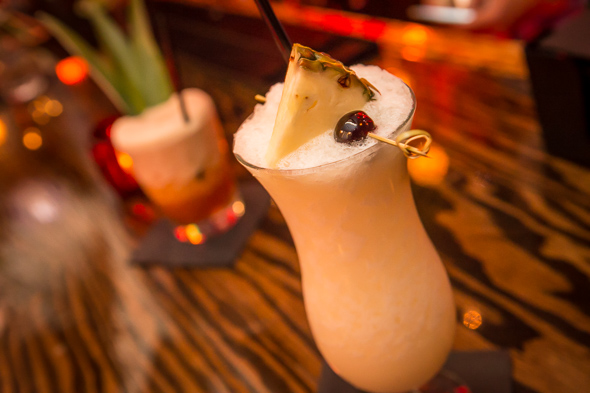 The Chi-Chi ($10), Alana tells us, is the most popular cocktail they've been making since opening their doors. It's essentially a vodka equivalent of the PiĹa Colada, with coconut cream and fresh pineapple juice. As you might expect, it's a little on the sweet side but bright and seriously drinkable. 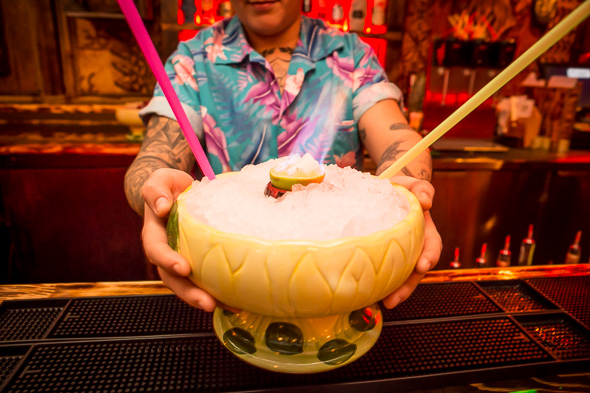 Considering the amount of alcohol in these recipes, they all represent good value for money. The Mystery Bowl ($23) is no exception - designed to serve between two to three people, it's a formidable combination of secret ingredients, the arrival of which is hailed with the loud clatter of a gong, while the whole staff drops tools to emphatically announce its delivery.

I'd be lying if I said that it wasn't a lot of fun. For an additional $15 you can have your cocktail served in one of their custom Tiki mugs that you get to take home with you. 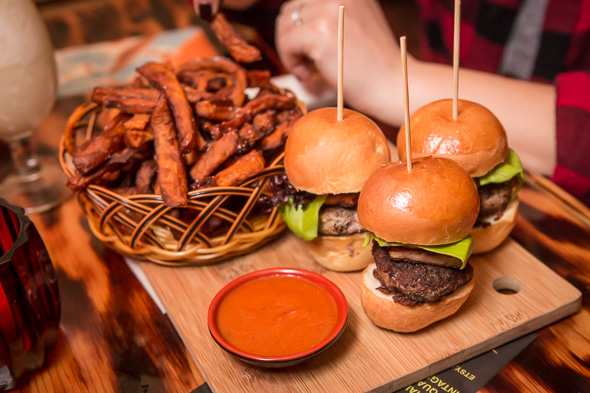 The kitchen serves a full menu until 11 p.m., and then produces late night snacks until close. As with the cocktails, there's a surprising amount of value to be had. We tried the "Luau" Sliders ($14), a trio of mini patties of pork and beef served on buns from the Tempered Room. With the requisite Spam in lieu of bacon, it's a sort of Polynesian take on the slider, adding pineapple and BBQ sauce. 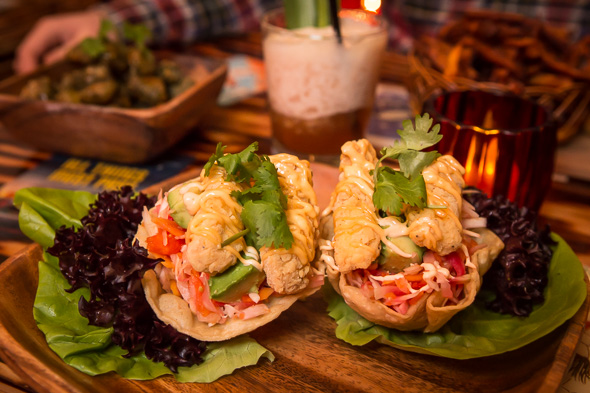 The "Humuhumunukunukuapua" Tacos ($12) were made with swordfish on our visit, but will change on a seasonal basis. They're served in a tortilla bowl, with a leaf of Boston lettuce to help hold the whole thing together. The fish sits on a bed of "tiki slaw," which is composed of fennel, celery root, beet and papaya. 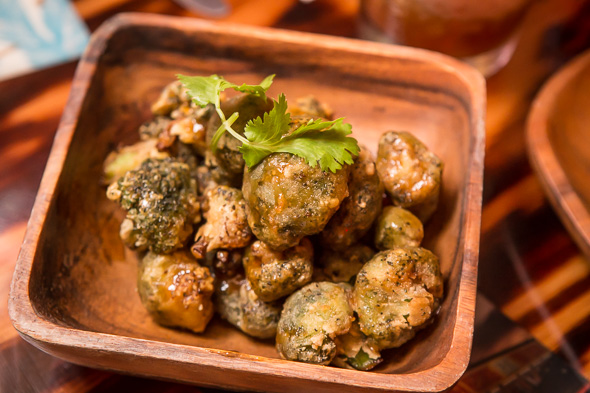 Teriyaki-fried broccoli ($5), on the other hand, is lightly dusted with rice flour to help the teriyaki sauce stick. As a result the dish packs a lovely salty tang that complements the cocktails nicely.

There's already been a number of live acts, from surf rock to rockabilly, playing in the back. Alana tells me that a regular schedule for live music is being finalized, but otherwise, it's an added bonus to wander in during a performance. There's no cover on band nights, either. 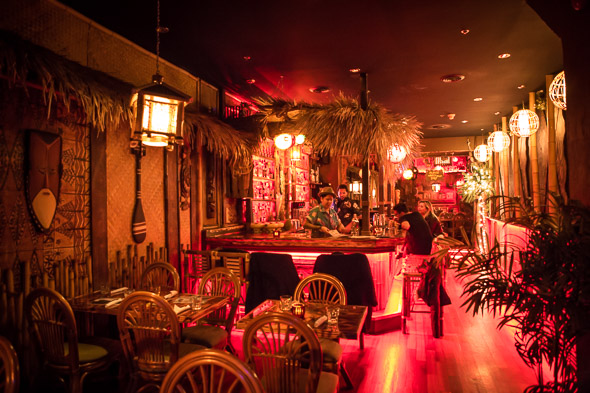 Shameful Tiki Room is a place that every cocktail fanatic in Toronto must visit at least once. If anything, it's a gloriously accurate re-creation of one of the great periods in cocktail history. You'll see bits of tiki and tropical themes all over Toronto in the coming months, but this is the only place that goes the whole nine yards. 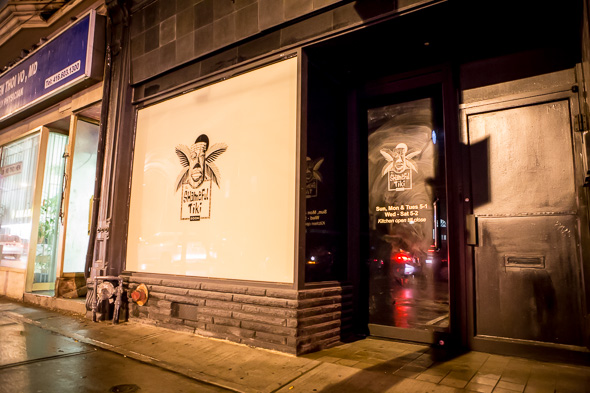