The top 25 new restaurants in Toronto by neighbourhood

New restaurants in Toronto were a plentiful bunch this past year offering a whole world of flavours right at our doorstep. From international street foods and bar snacks to avant garde interpretations of sushi or Southern food, 2015 was another big year for openings in this city.

Here are my picks for the the top new restaurants in Toronto by neighbourhood.

ANNEX
DIY teppanyaki arrived in the Annex this year with the opening of Aka Teppan. The menu boasts a wide selection of rice-and-meat combos along with a range of appetizers and fusion forms of teppan including pasta and udon.

BALDWIN VILLAGE
Mexican comfort foods and tacos star on the menu at Reforma. The two story taqueria serves up hearty bowls of pozole and "basket tacos" loaded with roast chicken or veg and dressed with lettuce, crema, cilantro and hot sauce.

BLOORDALE
The 47 is a cocktail bar and late night kitchen where the menu bills accomplished snack foods like socca, a chickpea crepe topped with lamb or eggplant and dressed with tahini, parsley, red onion and chili vinaigrette. 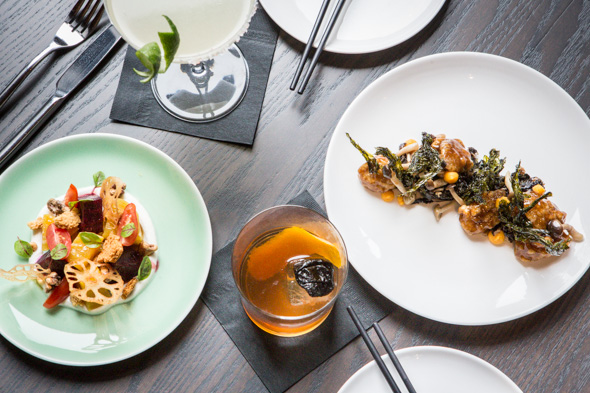 THE DANFORTH
Forth Avenue Kitchen & Bar is a convivial neighbourhood restaurant where the menu offers a little something for everyone. Nibble on an impressive selection of charcuterie and cheese or tuck into a satisfying house burger with exceptional fries.

DUNDAS WEST
Han Moto is a standout amongst a cluster of new openings in this neighbourhood. Open until late, the thing to get here is cocktails and small plates including katsu buns and dyno wings that are deboned AND stuffed with gyoza filling.

FINANCIAL DISTRICT
Go to Cactus Club Cafe for the art (seriously, you'll see pieces from Warhol, Basquiat and Mr. Brainwash) and stay for the food, which includes highlights like the butternut squash ravioli crowned with prawns. 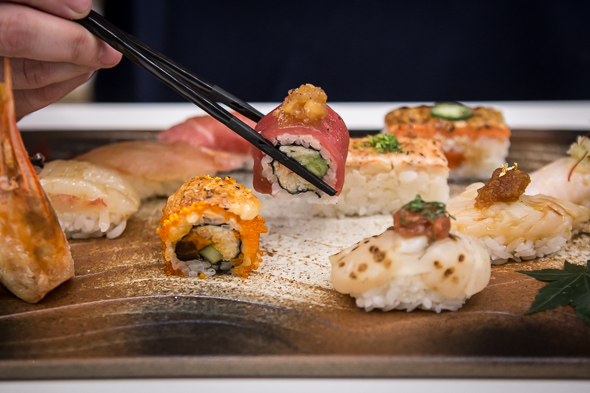 HARBOURFRONT
Upscale sushi and sake will totally live up to the hype at Vancouver import Miku. Order the signature flame-seared aburi sushi and oshisushi including pressed prawn painted in ume sauce and finished with lime zest.

THE JUNCTION
Honest Weight is a fish monger where you can dine in, and trust me you should. The ultra fresh catch can be had expertly prepared ranging from simple steamed shellfish dishes to the ever popular okonomiyaki. 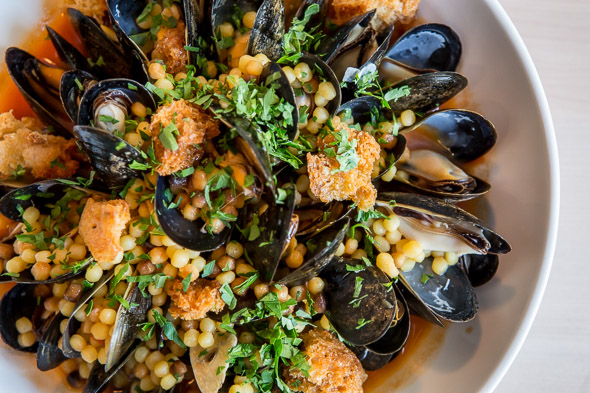 KING WEST
Cocktails and snacks like fresh-made ricotta with crostini and crispy zucchini frittii might be reason enough to visit Figo. If you don't fill up on starters, stick around for solid pizzas and pastas too.

LITTLE ITALY
Inside Bar Raval is a tapas bar and pintxos parlour where the menu lists cured meats, canned fish, and doughnuts decorated with lemon and fennel pollen. 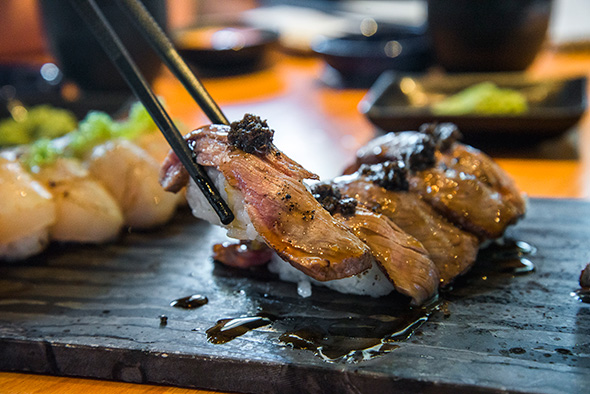 MARKHAM
KaKa All You Can Eat is an AYCE sushi restaurant on Highway 7 that has garnered high praise for its menu of unlimeted beef tataki with back truffle and blowtorched aburi-style sushi.

NORTH YORK
The Captains Boil in Willowdale is all about create-your-own seafood boils spilled out on the table and eaten with your bare hands.

PARKDALE
The Commodore is a quirky seafood-centric restaurant where swordfish crudo and calamari ragu risotto are musts. 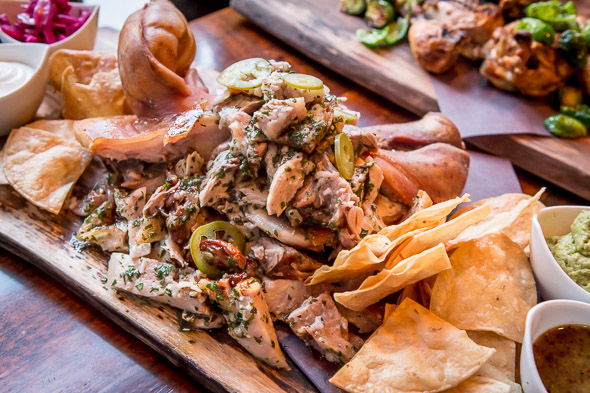 QUEEN WEST
Bar Hop Brewco is the second location for one of the city's best craft beer bars. The selection on tap might be the main draw, but dishes like pigs head nachos might just steal the show.

SCARBOROUGH
Little Pig Hot Pot is a modern AYCE eatery where orders are placed on iPads. While the unlimited supply of meat and fixings is welcome, it's the top notch soup broth that seals the deal.

YONGE & COLLEGE
Via Vai is a sleek Italian restaurant on Bay where the Neapolitan style pizzas and pastas are the main event.

YORKVILLE
Upmarket Japanese food is what Kasa Moto is all about. The restaurant offers sushi and raw bar selections along with noodles, rice dishes and grilled items from the robata.

Lead photo from Via Vai.