The top 35 pubs in Toronto by neighbourhood

Good pubs are essential to any neighbourhood, and in Toronto many areas boast plentiful options. Irish or not, these local haunts come complete with solid beer lists and menus featuring an array of your favourite pub foods.

Here are my picks for the top pubs in Toronto by neighbourhood.

Brewhaha is a craft beer lounge in one of the oldest English pubs in Toronto, taking up the basement level of the Duke of York on Prince Arthur. They boast a menu that features dozens of craft beers and basic bar eats.

Barrel House is another iteration of the Amsterdam Brewing brand. The spacious multi-level pub is just steps from their main brewing facility, and nominally houses their barrel-aged and sour beer programs.

Castro's Lounge is serious about good beer, offering a wide selection of cans and bottles, plus over half a dozen taps and a revolving selection of microbrews. To eat, you'll find an all-vegetarian menu of pub grub.

Bryden's is a mainstay in this neighbourhood where. You'll find rotating taps and a lineup of classic comfort foods. The menu offers ample variety, spanning from nachos and burgers to curries and macaroni and cheese.

Tallboys, the craft beer house at Bloor and Shaw, is a magnet for locals looking for a casual bite and a cold one. Double-smashed burgers and tacos are among the menu highlights.

Stout Irish Pub has the exact right vibe you'd want from your local watering hole. There are over a dozen beers on tap and the food is classic rib-sticking pub grub.

Toronto's only gay sports bar Striker can be found on St. Joseph St. The space is filled with dozens of HD screens, a good array of beers on tap and a menu filled with all your favourite pub staples. 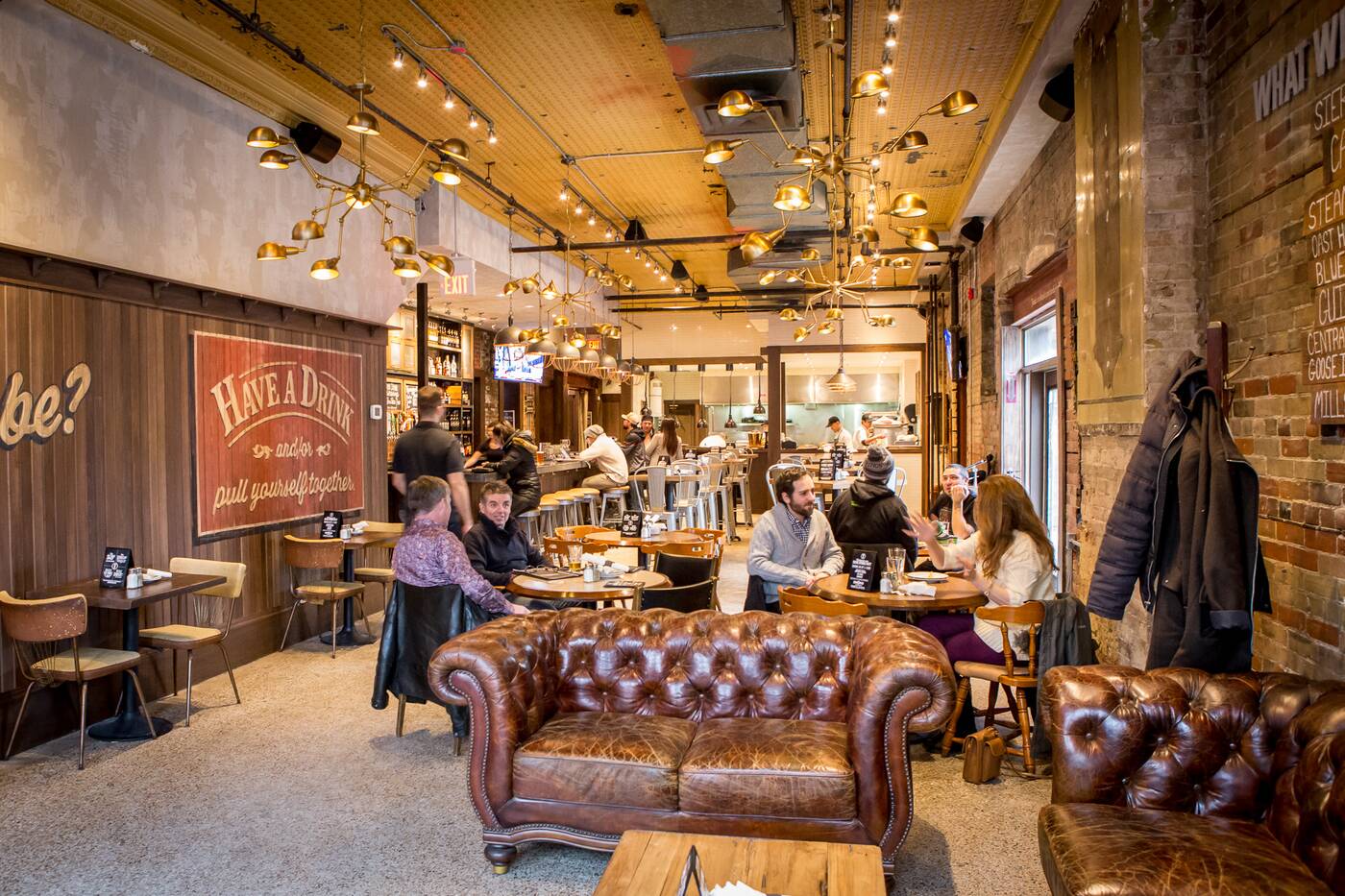 Grab a table or lounge at Dominion Pub & Kitchen on Queen. Photo by Jesse Milns.

Dominion Pub & Kitchen is the iteration of the Dominion on Queen, a landmark pub in the neighbourhood that was first established in 1889. Here you'll find a great selection of beer cans along with two dozen beers on tap.

Don't be fooled by the name - the Only Cafe isn't just a coffee house, but an excellent spot for good beer where the selection includes 230 bottles and cans plus 25 local craft taps.

The Wren is a saloon-style pub on the Danforth pouring local craft brews and dishing out a menu of beer-friendly food inspired by the Southwest.

The Contender is just one of the many sports bars to hit this neighbourhood. They boast a solid list of craft beers along with a menu of classic game day eats like nachos and foot-longs.

Bar Hop offers a discerning collection of seasonal brews, table bottles and ciders. The menu of bar foods features upmarket riffs on the classics, look forward to choices like house jerky and fish and chips.

Refinery Public House has a menu of elevated pub food and prices it all at just $6.95. As far as drinks go, they have a great selection of craft beer and cider from brewers like Great Lakes Brewery, Side Launch Brewery and Steam Whistle.

When it comes to finding a watering hole in the Financial District, look no further than King Taps, where the menu of beer is extensive and there's a food menu to match.

The Goodman Pub & Kitchen is a massive bar and restaurant with stellar views of Toronto’s waterfront. Expect traditional pub fare along with over 24 beers on tap and 20 bottles.

Residents in this neighbourhood are lucky to claim the Mugshot Tavern as their own - the joint is a beacon for lunch, dinner and late night eats, and the bar is well stocked with bourbon, craft beer, and cask conditioned ale.

Indie Ale House is committed to adventurous beer making, yielding flagship brews like the Breakfast Porter. In addition to the always-evolving bar menu they have a menu of pub fare too.

There's nothing not to like about Betty's - the divey hangout pours pints from over two dozen taps and keeps the kitchen open late. 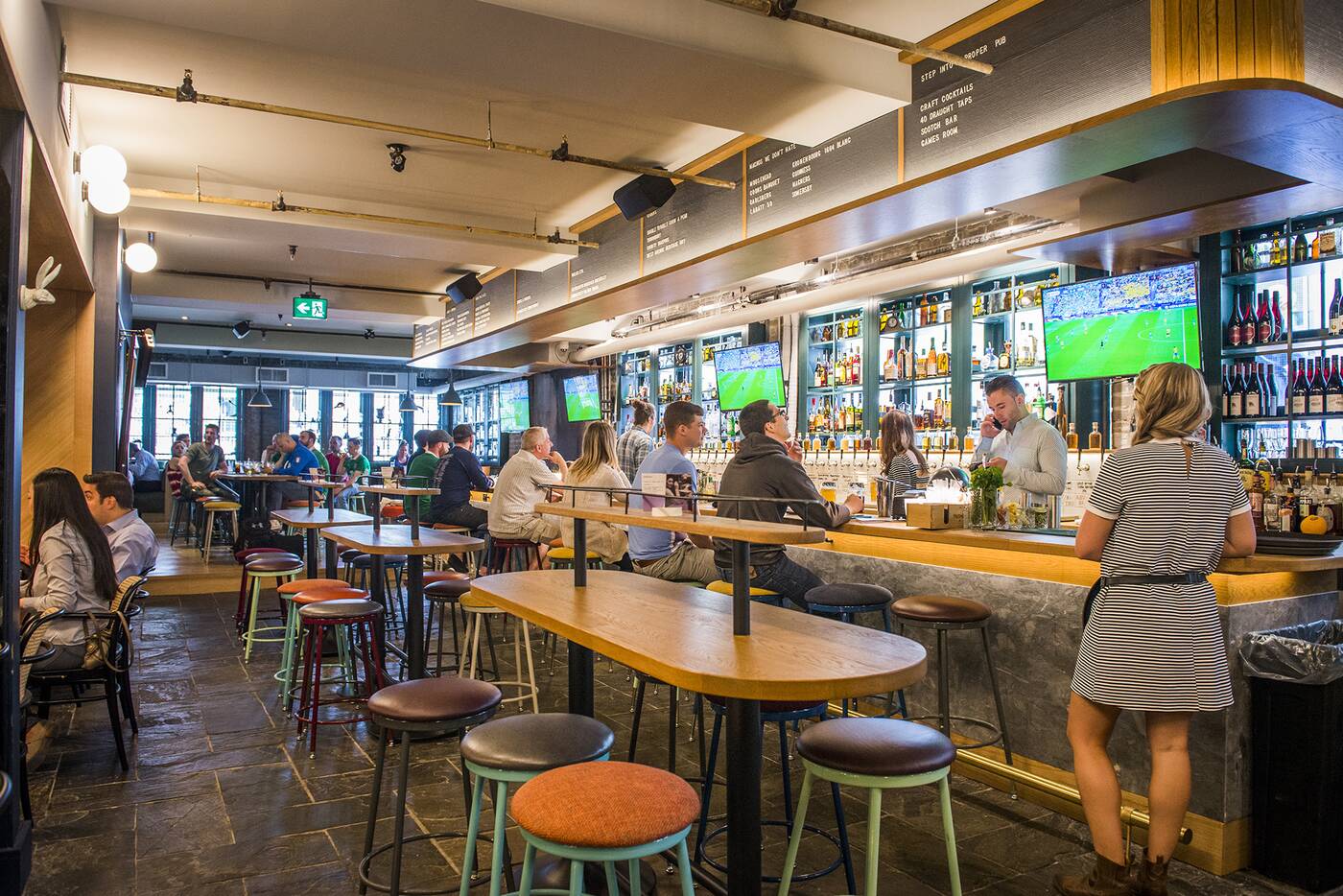 Grab a cold one and watch the big game at Belfast Love. Photo by Jesse Milns.

Belfast Love is the first Toronto venture from the Donnelly Group, a company that's already well-known for its pubs. It's a massive multi-room watering hole that has all the essentials, including beer, whisky and at least a dozen TVs.

Ceili Cottage is a lively Irish public house where staples on the made-from-scratch menu include corned beef.  To drink, you'll find lagers, ales, ciders and stouts sourced from both across the pond and locally.

Pubs thrive in in this neighbourhood thanks in part to all the office workers. Local Public Eatery manages to distinguish itself with an always changing line-up craft brews on tap and fun vibes.

Tucked away on Ashdale at Gerrard, Eulalie's Corner Store is the spot in this 'hood to stop for a bite and a tipple. The bar has rotating menu of beers on tap along with over 20 can offerings.

The selection of scotch far exceeds the range of beers at The Caledonian, though locals are keen on the Scottish pub for more than just the drinks menu. When it comes to hearty, wholesome eats, this place has got hungry guests covered with scotch eggs and haggis.

The Belsize is a pub that does elevated bar classics like house-made burgers and sausages. The taps are always changing so prepare to try something new with each visit.

The Cadillac Lounge is a kitschy bar that's brimming with good vibes, live music and a diverse clientele. Head over for brunch, dinner or just drinks.

Eastbound Brewing Company is a prime place to enjoy an ice cold beer. At dinner, find a hodgepodge of plates like duck liver pate and baked ricotta gnudi.

The Local is a neighbourhood haunt where live music and beer contribute to a convivial atmosphere. Expect to find a typical array of deep fried pub foods like chicken wings and fish and chips, plus some unique fusion foods.

Going strong for over 20 years, the Rebel House is a beloved spot for classic pub standbys like pickled eggs and blue plate specials. The wine list is devoted to VQA labels and the ever-changing beer menu specializes in premium draught. 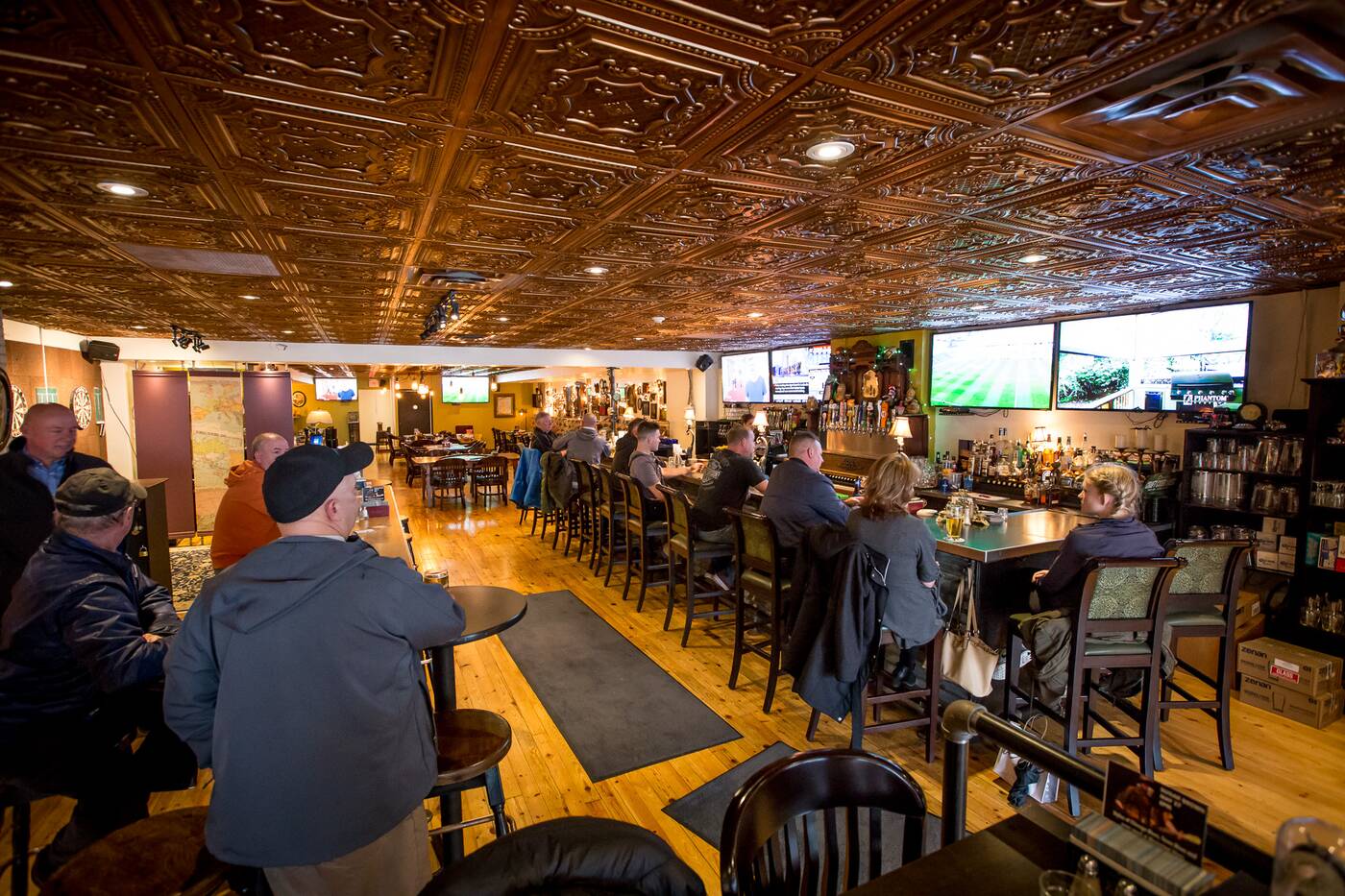 Victorian Monkey has the ample seating for groups of any size. Photo by Jesse Milns.

Victorian Monkey tops our list of best pubs in Scarborough. They offer a wide variety of beers in cans and on tap featuring lots of local brewers. They also have a solid menu of pub food featuring nightly specials.

Dave's on St. Clair prides itself on offering a menu of well-crafted pub foods and a carefully considered lineup of beers. You can't go wrong here with a pitcher and pizza.

The Grover has been around since 1982. The pub offers a menu of pub grub, rotating taps and the option to try a bunch by ordering a craft beer flight.

Dog & Bear on Queen St. is a sports-friendly beer hall with 20 beers on tap and a menu featuring wings, nachos, cottage pies, and big English breakfasts.

The Queen & Beaver is an inviting Victorian boozer on Elm St. dedicated to offering an excellent assortment of beers, wines and Brit-style comfort foods.

Duke of Kent has been the go-to corner pub in this neighbourhood for years, earning a solid reputation for an always fresh selection of draught beers and pub standards like wings and nachos.

The Monk's Table boasts one of the city's best selection of European beers on draught. Beer-friendly foods on offer include bratwurst, burgers and pork schnitzel.

Jesse Milns at King Taps. With files from Jaclyn Skrobacky and Liora Ipsum.

Downtown Toronto is getting a new Farm Boy location next week

Here's when Toronto's curbside patios could be opening back up