The Grover is a pub in the Upper Beaches that's been around since 1982. It's come under new ownership and updated its look, refreshing everything from its signage and back patio to its staff and menu.

First-time pub managers Sara Tilley and Jason Oosthuizen are running the place for Oosthuizen's father, who bought The Grover before having to move abroad for work. Tilley and Oosthuizen, having just returned from an almost-three-year stint teaching in Daegu, South Korea, were inspired by bars they'd visited around the world. 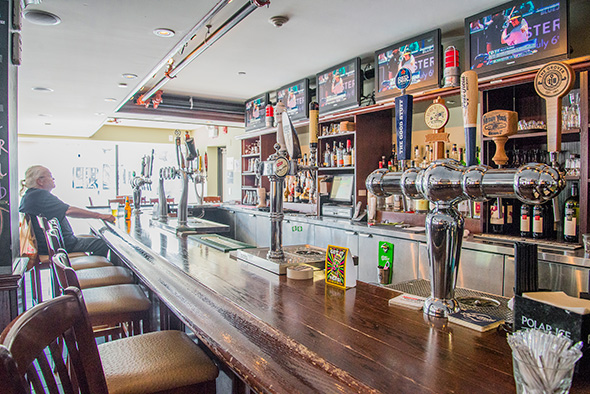 They want the pub to have a community element, with regular nights like Open Mic Fridays (where a featured craft pint is $5), Karaoke Saturdays and Stitch'n'Bitch Sundays, as well as monthly events like the popular Ladies Pint Out, pairing local microbrews with cheese and chocolate . A 65-person basement party room is also available for rental and special events. 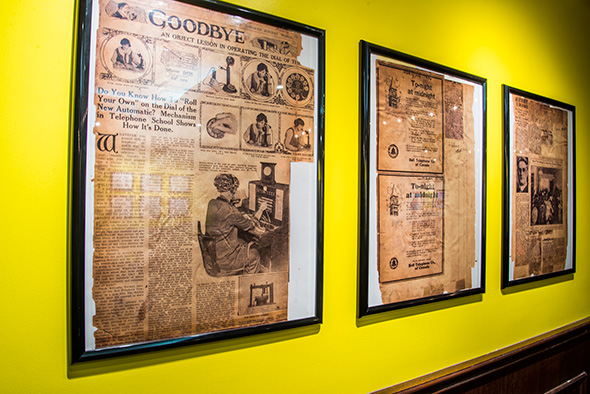 Old articles and pictures hanging on the basement wall obtained from Bell's archives acknowledge this area's interesting history; this place is named after The Grover Exchange Building, which used to stand in the backyard. It was Canada's first automatic dial telephone exchange, opened in 1924. 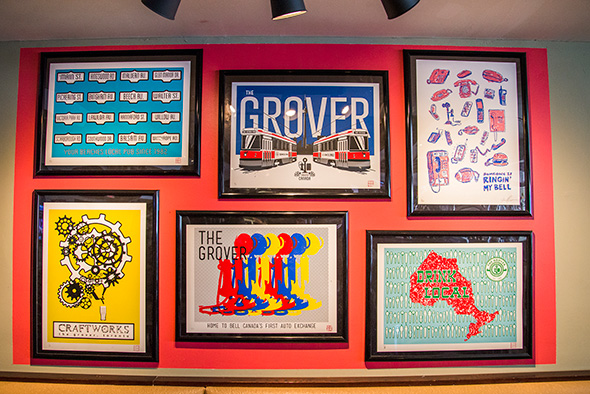 Colourful screen prints found throughout the bar were custom designed and shipped over from Daegu by Mesh Printing . The posters are very Upper Beaches-centric and encourage people to "drink local." There was a burgeoning craft beer scene when Tilley and Oosthuizen were in South Korea and they were happy to find we have one here as well.

The couple has introduced a bunch of Ontario craft brews to the bar, including Side Launch, Sawdust City, Nickel Brook, Great Lakes Brewery, Muskoka, Beau's, Wellington and Left Field (it's also a part of the Craft Beer Passport ). 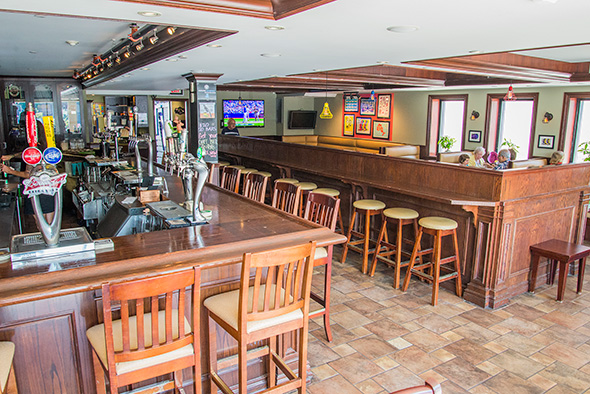 Prior to this, the bar had 20 Labatt-owned or affiliated beers on tap - now there are only four left (for those who prefer the old ways) - with the rest occupied by craft ones. Pints range from $5.93 to $7.08 ($7.30 for Thornbury Cider or Stella Artois) and craft beer flights, where you choose four 5-oz. samples to try for $10, are also available.

There are a couple of rotating taps, and when we visit, Muddy York Brewing Co.'s Gaslight Helles is one of them. It's a light and smooth, easy-to-drink lager, and tastes all the better since it was freshly tapped that day. 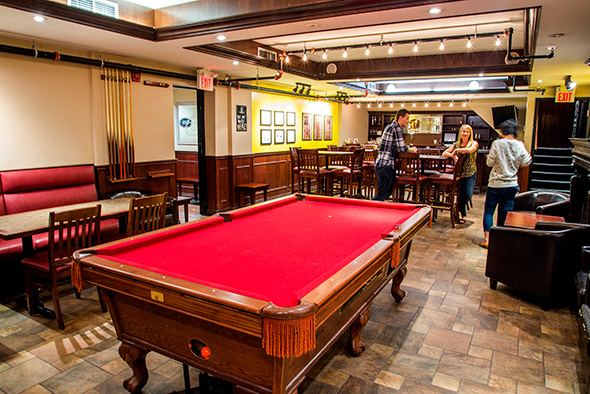 Oosthuizen grew up in the area - he attended Malvern C.I. and worked as a server at Lion on the Beach (now The Stone Lion ) as a teenager. He first met chef Tyrone Flowers when they both worked there and recruited him from Hush on King West to help revise The Grover's menu. It's still pub fare, but now everything is made fresh and not from frozen. 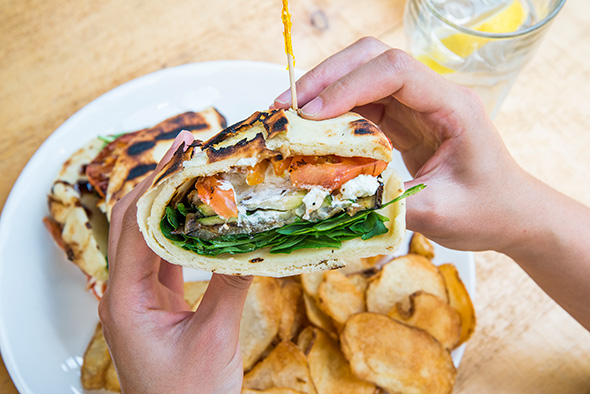 Expanded options for non-meat eaters (Tilley and Oosthuizen are vegetarian) are offered, including the weekday lunch feature while we're there: a grilled veggie flatbread ($8.99) packed with tomato, spinach, zucchini and goat cheese with a side of tasty - and addictive - house-made kettle chips. 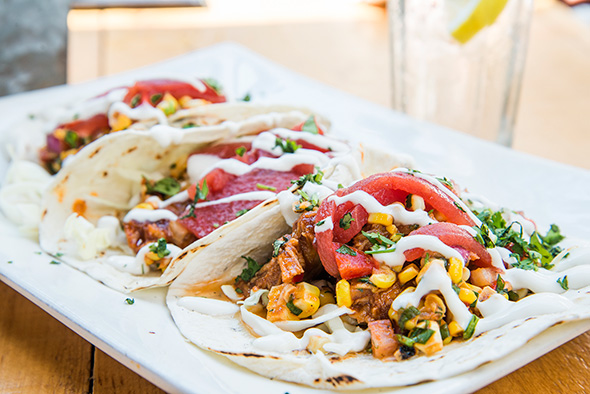 Fish tacos have proven to be a hit, so Taco Thursdays, where Flowers whips up tacos filled with whatever strikes his fancy that week, have been equally well received. We try a trio containing BBQ pulled pork, spicy bourbon corn salsa and pickled watermelon topped with maple creme fraiche and cilantro ($12.99), and can understand why they're so popular.

The combination of smoky, sweet, slightly spicy, tart and creamy flavours make these tacos taste delicious, while the crunch from the corn and the juiciness of both the meat and the watermelon make them a pleasure to bite into. I don't usually like watermelon, but pickling makes it a lot more palatable to me.

As a pub, you've got to have a good burger, and the Southwood ($12.99), a beef burger with cheese, bacon, sauteed onions, mushrooms, lettuce and chipotle mayo between a pretzel bun topped with a pickle, doesn't disappoint. It's served with fresh-cut fries or a garden salad. 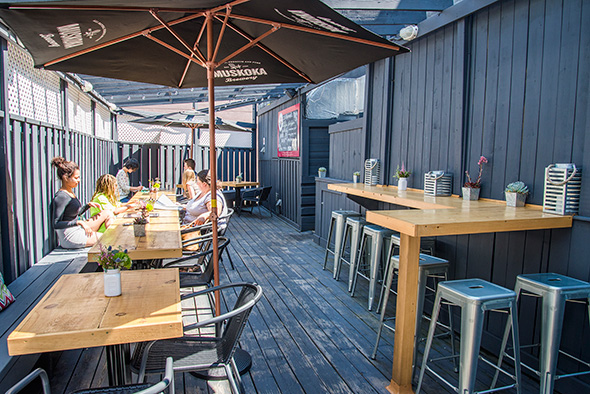 Tilley and Oosthuizen tell me they're learning as they go, working hard to change the pub's previous reputation. "As people remember it, it wasn't a place people would bring their children to," Oosthuizen says. Families are actually venturing in now.

In trying to make The Grover a local hub for the community, the goal is to strike a balance between keeping old regulars satisfied while drawing in new clientele so that it's a space for everyone. With less options in this part of town, the two want to create something special for the 'hood: "We want to bring that west end experience to the east end," says Tilley. 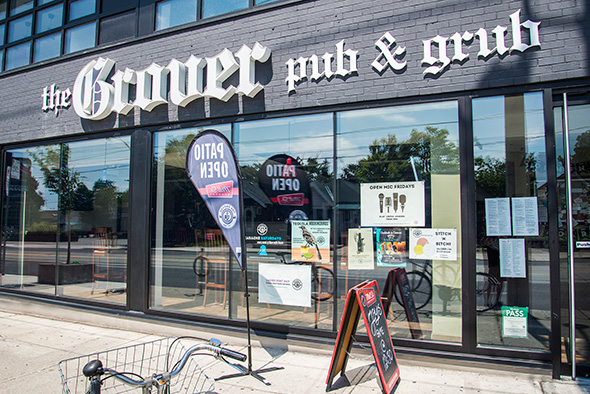