The top 35 parks for a picnic in Toronto by neighbourhood

Parks for a picnic in Toronto don't need to be huge spaces with lots of tables, but there are a few criteria that they should meet. In addition to plenty of grassy space to set up a blanket, you'll want to ensure there's some shade and possibly even a bit of privacy if romance is on the menu.

Here are my picks for the top picnic-friendly parks in Toronto by neighbourhood.

Despite being filled with mature trees, this neighbourhood isn't flush with wide open parks ideal for picnicking. The exception is Jean Sibelius Square, which has a dedicated picnic site as well as a grassy area to lay out a blanket.

Lakeside picnics have been a summer pastime in Toronto for well over a century, and one of the nicest places to participate in this tradition is Beaches Park, located just north of the sandy beach area, where you can pick a quiet spot in the grass or hunt down a full shelter for a big group.

While Dufferin Grove might be on the east side of the dividing line between Bloorcourt and Bloordale, this green space has been claimed by the latter neighbourhood as its own. This sprawling park has lots of picnic tables, a community oven and even fire pits for an evening picnic.

Just a short walk to the west of the main retail drag is a gorgeous series of green spaces that hug the Humber River. For the purposes of a picnic, Étienne Brûlé Park is the best bet, with a designated site and a nice view of the river.

Those looking for a little escape from the urban grind head to Riverdale Park West for picnics. While it lacks the skyline view of its sister park, it tends to be quieter — which will suit those looking for a bit of privacy. 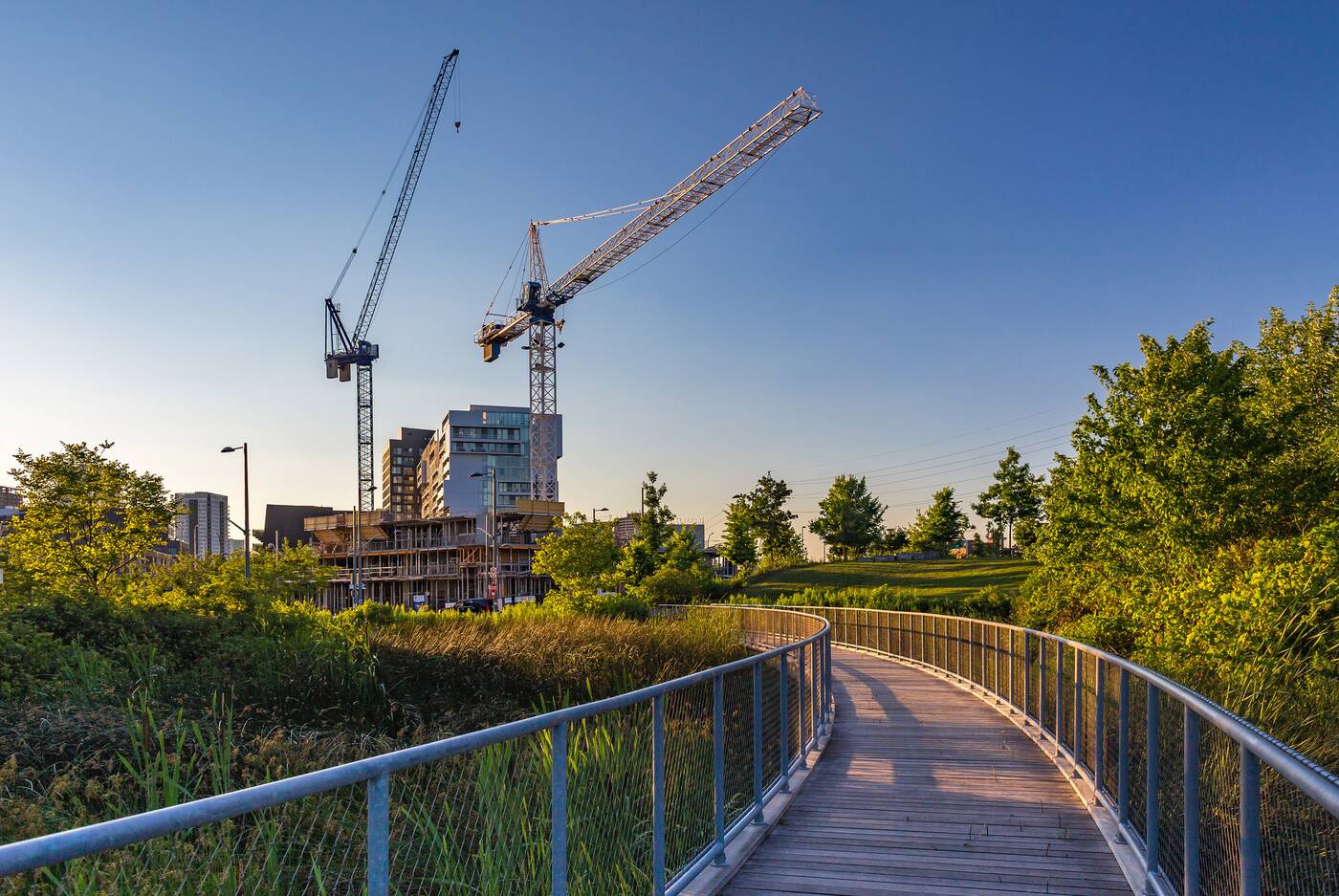 Alongside the numerous walking paths, Corktown Common also has a nice grassy area for a picnic. Photo by Randy Hoffmann.

Not so long ago, prospective picnickers near Corktown didn't have many enviable options for outdoor eating and lounging, but now the area boasts one of the best parks in the city for such activities in the form of Corktown Common.

The best spot to lay out a blanket and enjoy some fresh air in this neighbourhood is Earlscourt Park. Despite being a busy hub of activity for various sports throughout the summer, there are plenty of spots away from the main fields where you can have quiet picnic.

Withrow Park offers a nice sanctuary for a picnic just south of the Danforth. There are two designated picnic areas plus a community kitchen and fire pit.

Dovercourt Park is the central outdoor gathering spot, with a baseball diamond, tennis courts, a playground and a nice grassy area with picnic tables at the southeast end for a more relaxing and stomach-filling experience.

You won't find a place to picnic with a better view of the city than Riverdale Park East. It can be tricky to find a good spot on the slope that overlooks the city, but if you're patient flatter spots do exist that offer the best ground for picnicking and skyline-watching.

Surrounding one of the Don River's many tributaries, Taylor Creek Park is bucolic place for a picnic and it's dotted with many tables and fire pits to set up shop. 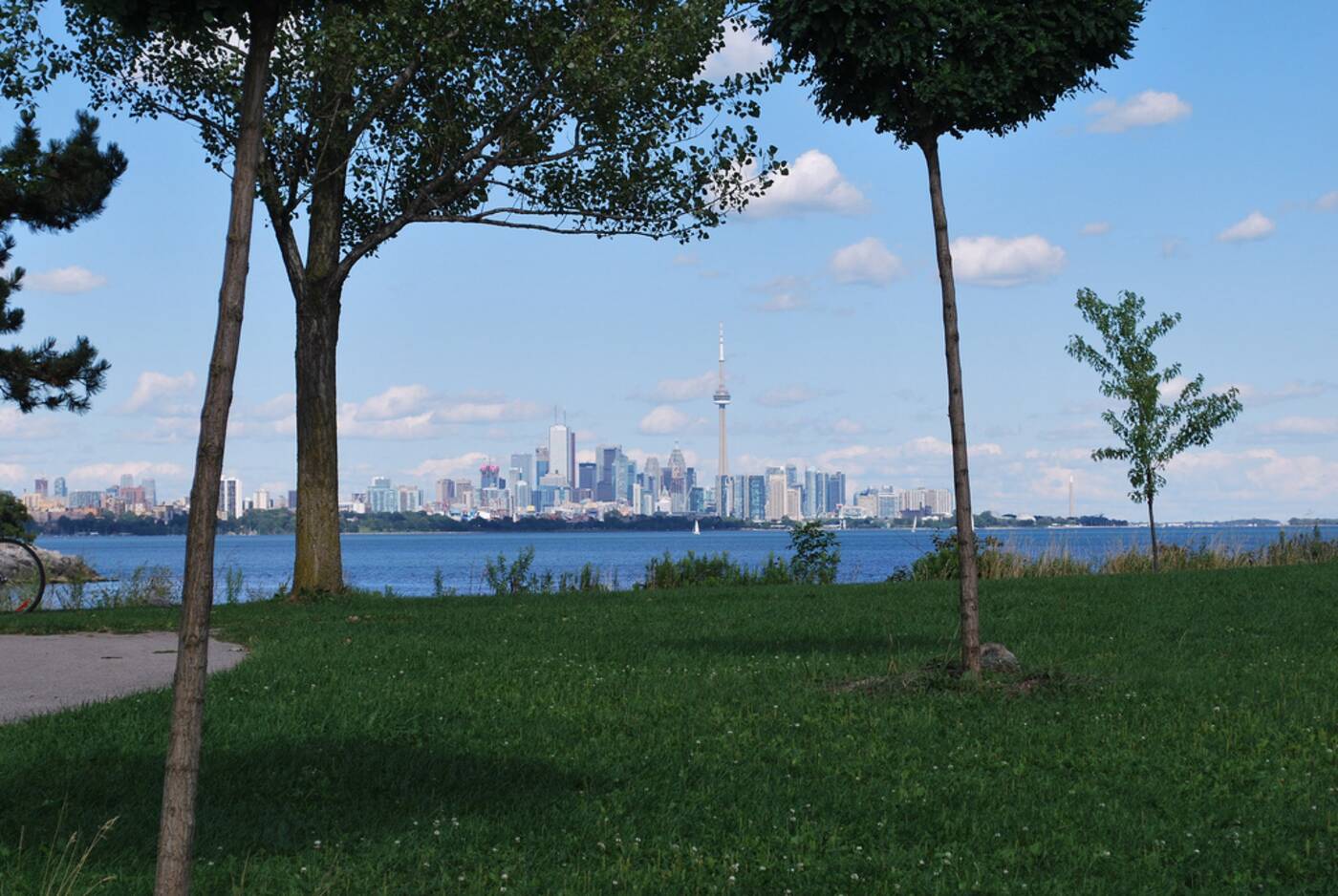 This former borough has plenty of parks suitable for a picnic, but none quiet so nice as Humber Bay Park West, where you can set up your provisions within a few metres of the shore and a stunning view of Toronto in the distance.

Dominated by skyscrapers, the heart of the Financial District has few options for picnicking, but just to the east the new Berczy Park has been designed to encourage office workers to eat outdoors on the grassy knoll or one of the many benches.

The central waterfront can be a tricky spot to set up an elaborate picnic as places like HTO Park and the Toronto Music Garden are often busy, but one spot that's sure to work is the area's new Trillium Park.

The choice of park is obvious here. What's so great about High Park is the variety of locations on offer. You can picnic on the hill overlooking Grenadier Pond, opt for a more secluded spot at the northern end, or hunt down a more wooded area.

It might surprise some that this neighbourhood doesn't have more picnic options, but outside of its proximity to High Park, the majority of green spaces here are quite small. Your best bet is Baird Park, which has ample shady areas to set up an outdoor lunch.

Picnickers in the Junction Triangle have a few options, but chief among them is Perth Square Park, which is a bit less busy than nearby Campbell Park and thus better suited to a quiet outdoor meal.

There's only one go-to spot for a picnic in and around King East, but it happens to be one of the nicer spots in the city. St. James Park has plenty of quiet spots where you can eat in peace.

Clarence Square might be a bit nicer in general, but Victoria Memorial Square Park gets the nod for picnicking in this neighbourhood because it's quieter and there are more places to spread out a blanket without worry that your food will be nabbed by a four legged friend. 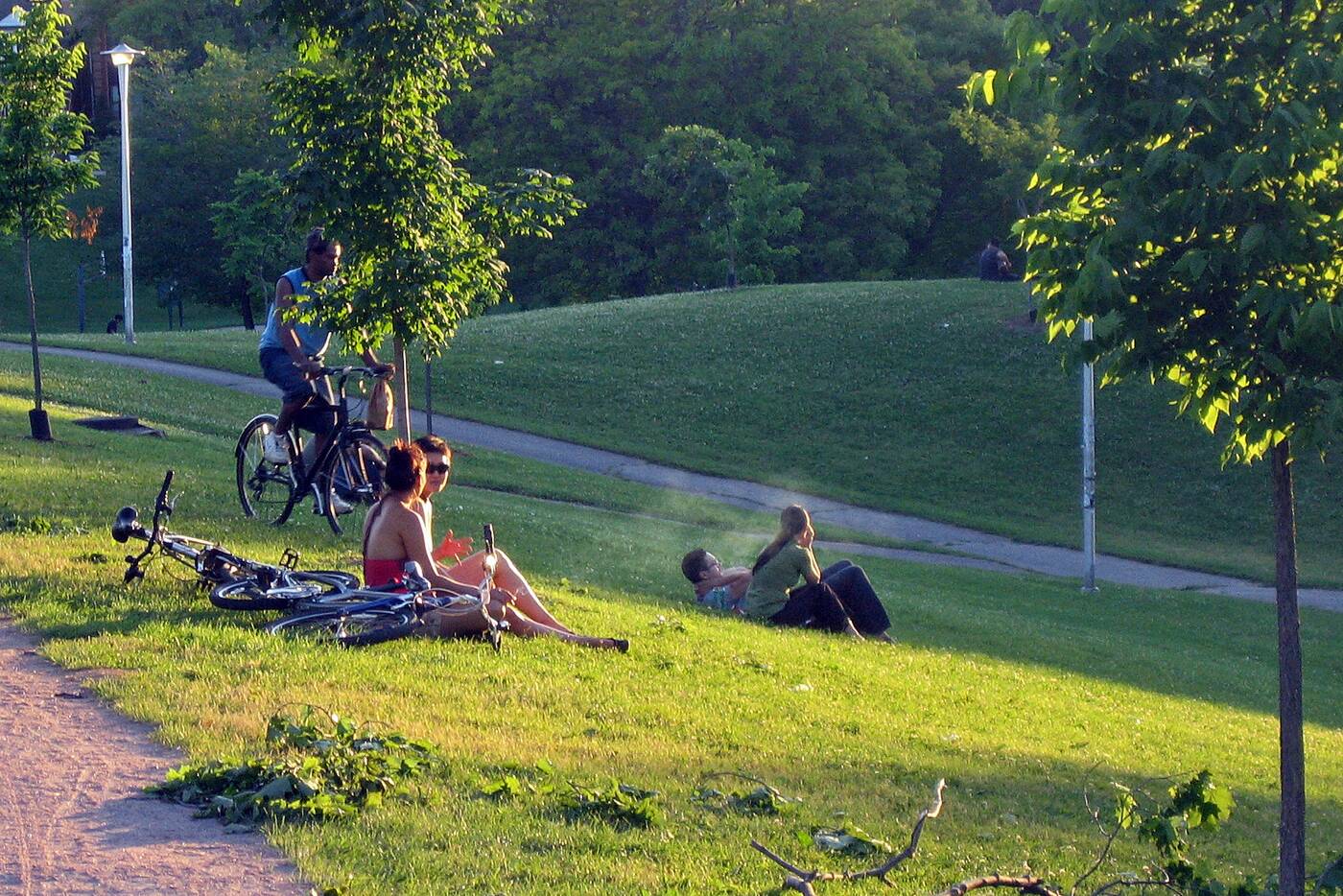 The gentle slopes of Christie Pits can make for a great picnic spot. Photo by Bobcatnorth.

The sprawling grounds of Christie Pits are the best place to have a picnic in this neighbourhood, though the wisest know that the south and east sides of the park trump the northern end, which is the domain of baseball players.

Greenwood Park is a bustling place during all four seasons, but thanks to its large size (it's roughly 15 acres), you're sure to find a secluded spot for an outdoor meal, whether that's in the dedicated area with tables or in one of the many grassy areas away from the action.

Travel north of the main College Street corridor to Art Eggleton Park for a green space that's just made for a sunny day picnic. This well-treed park has shade everywhere, which might not be great for sunbathing, but sure helps when you're trying to enjoy a meal.

You won't do much better than Sherwood Park for a picnic, which is surrounded by lush ravine walls, but features lots of grassy space and tables where you can set up your culinary delights.

Windfields Park is one of the quietest places you'll find in Toronto to have a picnic. The middle section is park land surrounded by tall trees where there's plenty of space to spread out a blanket and enjoy an outdoor meal.

It's always good to remember just how well linked Parkdale is to the waterfront. Simply cross the pedestrian bridge at Jameson and you're at Marilyn Bell Park, where you can picnic on the large lawn area in view of Lake Ontario. 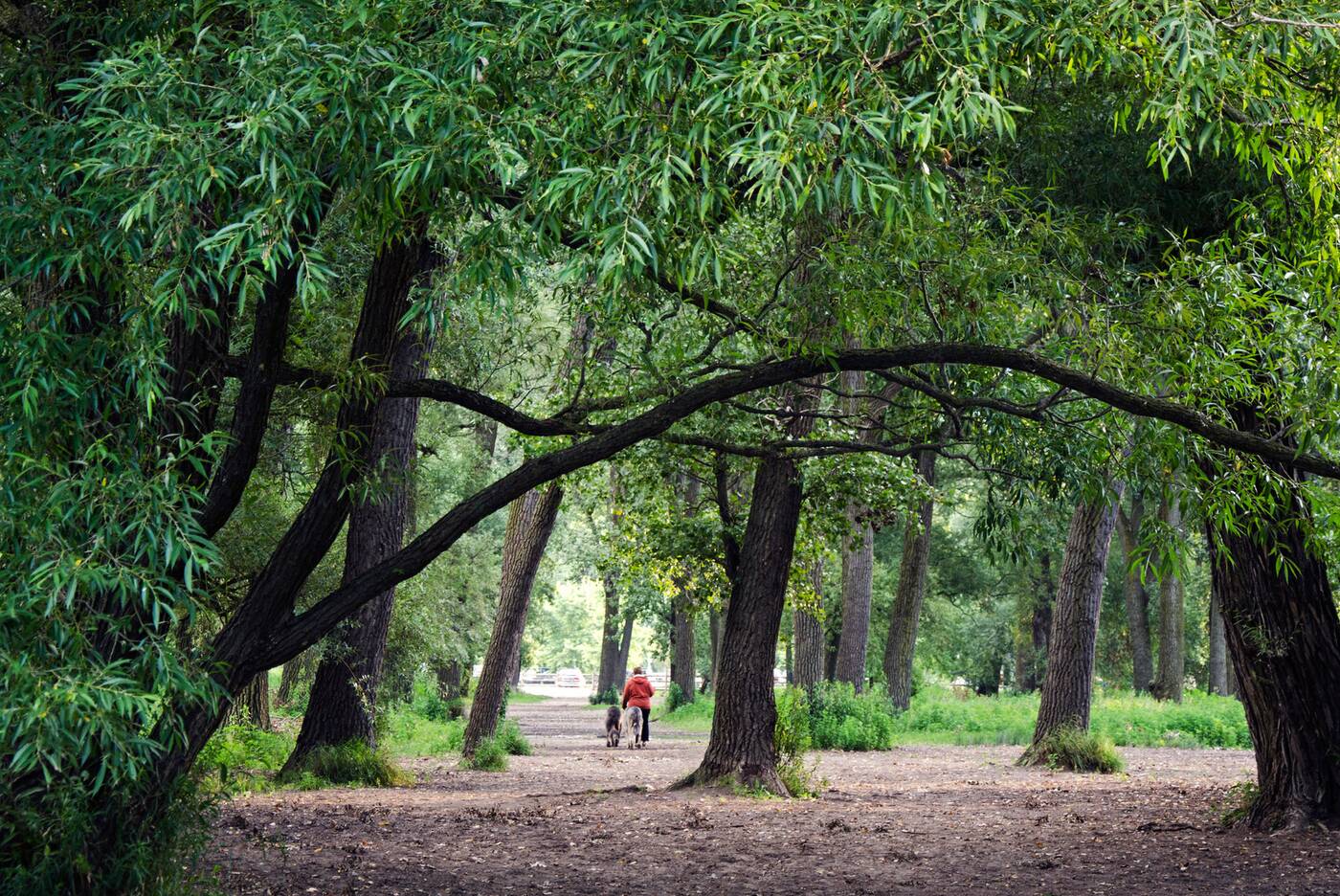 The wooded area at Cherry Beach is a great spot for a picnic or barbecue. Photo by Ilona.

Cherry Beach is more than just a beach, you know. The wooded area to the north is an ideal spot for a picnic and many people seek it out for all day barbecue sessions during the summer. You can watch the action on the beach while you chow down.

Looking for a quiet place to picnic near Queen West? Look no further than the revamped Grange Park, which has plenty of shaded areas to take advantage of. There are also select tables, but the competition can be fierce.

Sorauren Park is the go-to spot for a picnic near Roncesvalles. The key here is to stick to the perimeter of the green space where there's considerably more shade than the centre.

Craigleigh Gardens is a quiet park that makes a perfect spot for a secluded picnic. You might get some snooty looks from rich dog walkers, but places like this were meant to be enjoyed by everybody, so be sure to enjoy!

Guild Park is one of the most beautiful places in Toronto. You dine al fresco amidst the architectural remains of early Toronto and explore the lovely grounds of one of the city's true hidden gems.

If you like people-watching, the park of choice in this neighbourhood has to be Wychwood Barns. The grass can get a bit burnt out, and it's notorious for its lack of shade, but there's plenty of action to take in.

As one of the premier picnic destinations in the the city, ET Seton Park is often filled with large groups out to enjoy the picturesque setting on summer weekends. There's even a picnic shelter if you're worried about rain.

The city's busiest picnic destination is still one of its best thanks to the sheer carnivalesque atmosphere that erupts at Trinity Bellwoods Park on sunny summer weekends. Make sure to arrive early to secure a good spot.

Just a short walk away from this busy intersection is the lovely David A. Balfour Park, which has tons of space for picnicking on the grassy area above the ravine. There's an underrated view of the skyline here, and there are even a few spots to try out in the ravine below.