The top 25 day trips from Toronto

The top day trips from Toronto are all about packing in as much fun as possible without spending too much time in the car. The best one-day sojourns require less than two hours driving time each way, which still leaves an astounding number of options for those looking to escape the city.

Here are my picks for the top day trips from Toronto.

Pamper yourself at a Scandinavian-stye spa

Toronto has some pretty fine spa options, but if you want to get away from the city and relax, Scandinave Spa is the ultimate day trip. Because there's a registration system for the baths, it never gets completely overcrowded.

Nerd out on Toronto's transit history in Milton

If you think vintage streetcars and and other transit vehicles are cool, the Halton Radial Railway will be a wonderland for you. There's old Peter Witt and PCC streetcars among the host of relics here. You can even ride on the little track they have!

Do Niagara Falls a bit differently

It's the ultimate day trip from Toronto, so much so that Niagara Falls has become completely predictable. Shake it up next time you go by really soaking up the kitsch at the Flying Saucer restaurant before doing the zipline or riding around on the Mario-Kart style track.

Stroll across an epic suspension bridge

Located on the outskirts of Campbellford in Ferris Provincial Park, the Ranney Gorge Suspension Bridge is a must-visit destinations. It spans 300 feet above a quick rushing section of the Trent River and offers stunning views of Northumberland County. 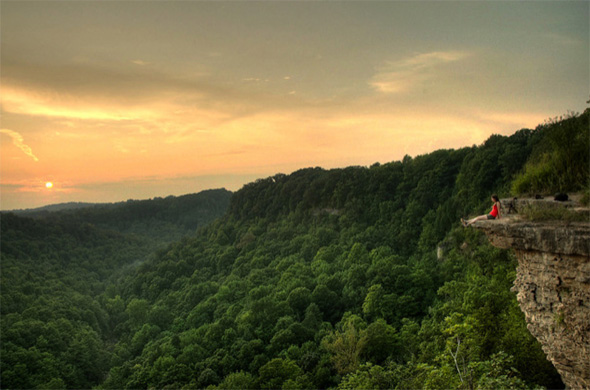 Go for a hike at Dundas Peak

There are so many places to hike around Toronto, but few are as pretty as Dundas Peak, particularly in the fall. As an added bonus, you can check out some of the spectacular waterfalls in the area.

Rattlesnake Point is a great place to try out rock climbing for the first time, particularly if you don't mind crowds. It can get rather busy here due to its proximity to Toronto, but there are plenty of instructional groups that operate on this cliff. It's also great for hiking.

Explore the caves of Eramosa

One of the closest cave systems to Toronto, it'll take around an hour to get to Eramosa Karst. There aren't really the deep caverns that you'll find elsewhere in the province here, but there are so many nooks and crannies that it's a great way to spend a day exploring the time-worn terrain that also features streams and waterfalls.

Get a dose of culture at the Shaw Festival

The Shaw Festival is one of the country's premier theatre festivals. Featuring the work of George Bernard Shaw and his contemporaries, it's been running for over 50 years. With multiple theatres, the dramatic options are robust, while Niagara-on-the-Lake is worth spending some time before and after the play of your choice is done. 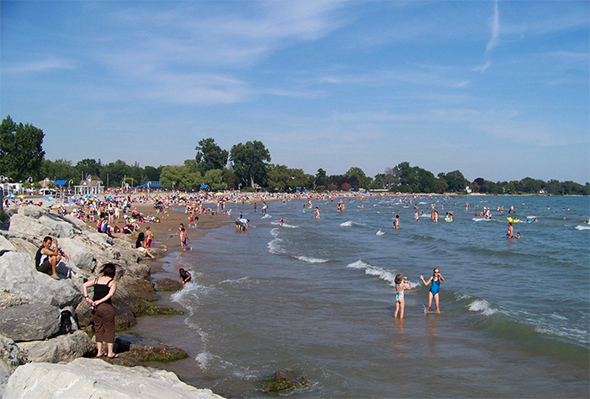 The sprawling sandy beach in Cobourg. Photo by Will.

Spend a day at the beach in Cobourg

Cobourg has one of the nicest beaches within an hour and half of Toronto. While not really a secret, this is one of those day trips that tends to fly a little bit under the radar compared to other beach getaways. The water is at its best for swimming from mid July to late August.

Ontario's craft cider scene is blowing up, and a perfect little day trip is a visit to Spirit Tree Cidery in the picturesque community of Caledon. There's a bakery and bistro on site, so you can do a tasting and stay for a meal. Check out the new lookout at Cheltenham Badlands while you're nearby.

Take a lazy cruise down a river

There are lots of options for tubing near Toronto, but perhaps the best is along the Grand River. You can float down the the water in the Elora Gorge or use access points in Paris and Waterloo for a more laid back experience with less rocks and mini-rapids to navigate. 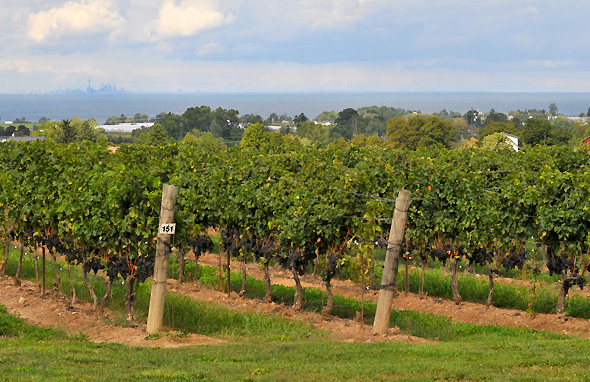 The vineyards and the view at Thirty Bench Winery. Photo by Derek Flack.

Get a buzz in wine country

Toronto's close proximity to Niagara wine country is pure fodder for day trips. Not only is the landscape beautiful from spring through fall, but the tasting experience at most wineries is both educational and fun. Beamsville is a popular destination, but Niagara-on-the-Lake is great as well.

While there might not be a ton of technical trails or obstacles, Kelso is a great place to spend a day mountain biking thanks to the serious climbs up the Niagara Escarpment and gorgeous single track. when you're done riding, hit up the beach for a cooling swim.

Immerse yourself in Hamilton's art scene

Did you know that Hamilton has a robust arts scene? You can tour upstart galleries on any given weekend, but for a more memorable trip head over on a Friday for the bi-monthly James Street North Art Crawl, where you'll get a better sense of just how much energy is pumping out this place. You can really spend a whole weekend there. 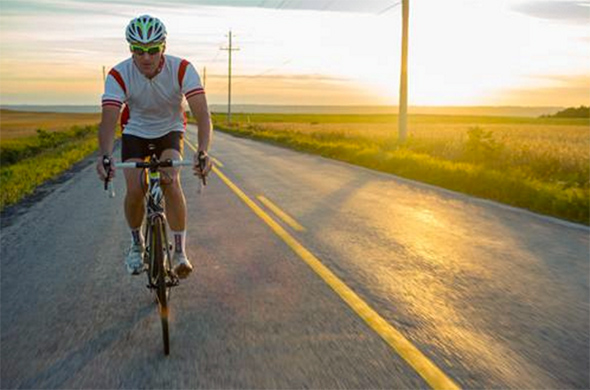 Some of the best riding in Ontario can be found in Grey County. Photo via Grey County Tourism.

Test your legs by cycling in Grey County

There's plenty of great places to ride a road bike in and around Toronto, but if you want to spend a day really testing your mettle, head to the Grey County area around Blue Mountain, where you can sweat it out on climbs like Scenic Caves Drive (be careful of traffic here) and Grey Road 19.

Take in the quaint delights of Port Perry

We tend to think of cottage country as being more than two hours of driving from Toronto, but a trip to Lake Scugog won't take that long. Kinsmen Beach is a lovely spot to spend an afternoon, and you can also check out Old Flame Brewing Co. for a tasting and tour.

Join the party at Wasaga Beach

Is there beach that's more fun in Ontario? With apologies to Grand Bend, Wasaga is the ultimate beach day trip form Toronto. There will be lots of crowds, of course, but that's part of the fun. The sand is gorgeous and the water warmer than you might think, based on its shallowness near the beach. 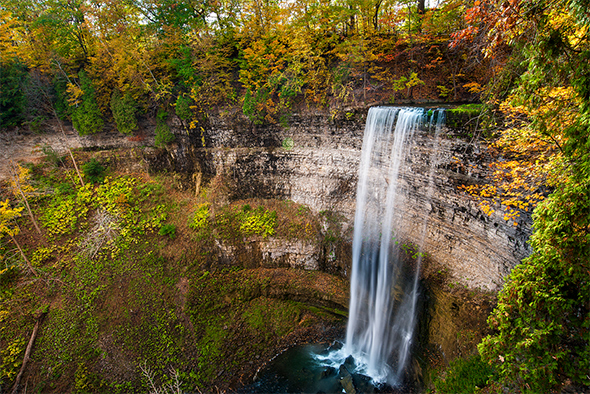 The stunning Tews Falls in Hamilton. Photo by Worrawat Engchuan.

The most popular day trip from Toronto might be to that big waterfall you've heard about, but nothing beats a trip to the Hamilton area to hike in and see hidden away gems like Tews, Webster, and Tiffany falls.

If you plan your route well, you could easily hit four or five craft breweries around Toronto in a nice loop. Heading west, you might hit Cameron's Brewing Company in Oakville, Nickel Brook in Burlington, Grand River in Cambridge, before heading down to Niagara-on-the-Lake for the Silversmith and Oast House.

Go swimming in a pool that's more like a lake

Quite possibly the coolest outdoor pool in the Toronto area, Bronte Creek Provincial Park has a 1.8 acre swimming area that holds 5.8 million litres of water. Unlike most swimming pools, you can wade in, which means its kid friendly but also ideal for slowly shaking off a hangover (wear a hat).

Get lost in Glen Major Forest

Glen Major has long been on the radar of mountain bikers and hikers. This 1,548 hectare woodland just northeast of Toronto is dotted with challenging trails and feels completely separated from the bustle of this city, despite the fact that it's less than an hour's drive away in low traffic. 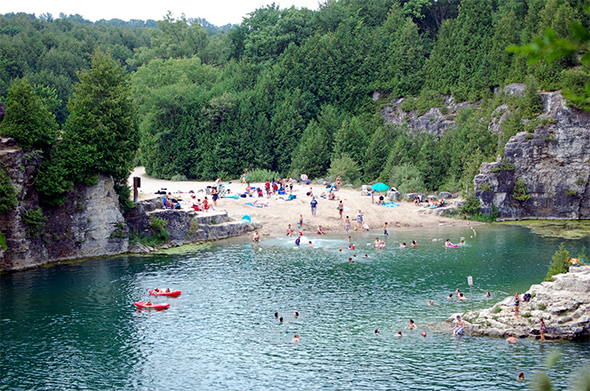 Go for a swim in an old quarry

The Elora Quarry is one of the best swimming holes in Ontario, and it's just an hour's drive from Toronto. The crowds flock here on summer weekends, but it's not hard to tell why: on a sunny day the swimming area looks both surreal and serene. Go early to beat the crowds.

Spend the day on Lake Simcoe

If you want to ditch the city for a day at the beach, you could do a lot worse than a trip to Sibbald Point Provincial Park, which is about an hour away from Toronto on the south end of Lake Simcoe. There's a sandy beach, ample picnic areas, and hiking trails around the park.

Aberfoyle is a quaint little town about an hour west of Toronto that's worth visiting for its quaint main street and Mill restaurant, but it's also home to a weekly antique market that hosts over 100 vendors selling various furnishings and knick knacks on Sundays throughout the spring and much of the fall.

Walk in a lavender field

The numerous lavender fields a short drive from Toronto have become popular spots to get that Instagram moment, eat some ice cream or even spend the night. Look out for the yellow door.

Thank you to PSR Brokerage for sponsoring this post.

Toronto is getting a giant inflatable entertainment complex