The top 30 mac and cheese in Toronto by neighbourhood

The mac and cheese you'll find at Toronto restaurants is a serious upgrade on Kraft Dinner. Find it on pub menus as the main event, as a staple side at barbecue joints, and jazzed up with all sorts of flourishes at dedicated mac and cheese specialists.

Here are my picks for the top mac and cheese in Toronto by neighbourhood.

Colby, gruyere and cheddar cheese combine at the Victory Cafe for this mac 'n cheese, loaded with caramelized onions and sun-dried tomatoes. Bread and a salad come on the side, so there’s even more bang for your buck.

The Carbon Bar makes thier mac with cheddar, mozzarella, onion, garlic chipotle and topped off with breadcrumbs. Take it up a notch by adding proteins like beef brisket and fried chicken into the mix.

The mac and cheese at Auld Spot Pub has all the makings of a stellar dish. It consists of bechamel, asiago, gruyere, parmesan and double smoked bacon.

The mac and cheese at Wildly Delicious comes with white cheddar and gruyère cheeses tossed with crumbled bacon and topped with roasted panko crumbs.

The Heartbreak Chef is known for their giant juicy fried chicken sandwiches but don't pass up the chance to try their mac. Their Big Ass Mac features a five cheese blend of creamy macaroni and cheese, topped with two pieces of fried chicken tossed in Carolina butter sauce.

Nashville hot chicken and mac and cheese are a match made in heaven at Chen Chen's.

Texas-style smokehouse The BarBQ Factory offers mac and cheese as a side to their delicious barbecue offerings.

Dope as Duck offers its award-winning mac and cheese at its brick and mortar location in Etobicoke. You can get a Loaded Bacon, Jerk Chicken, or the Signature Duck Mac and Cheese made with duck from King Cole Farm.

You can discover fried chicken joint Chen Chen Nashville Hot Chicken inside Loch & Quay. While chicken may be the star they're serving it up on top of creamy mac. 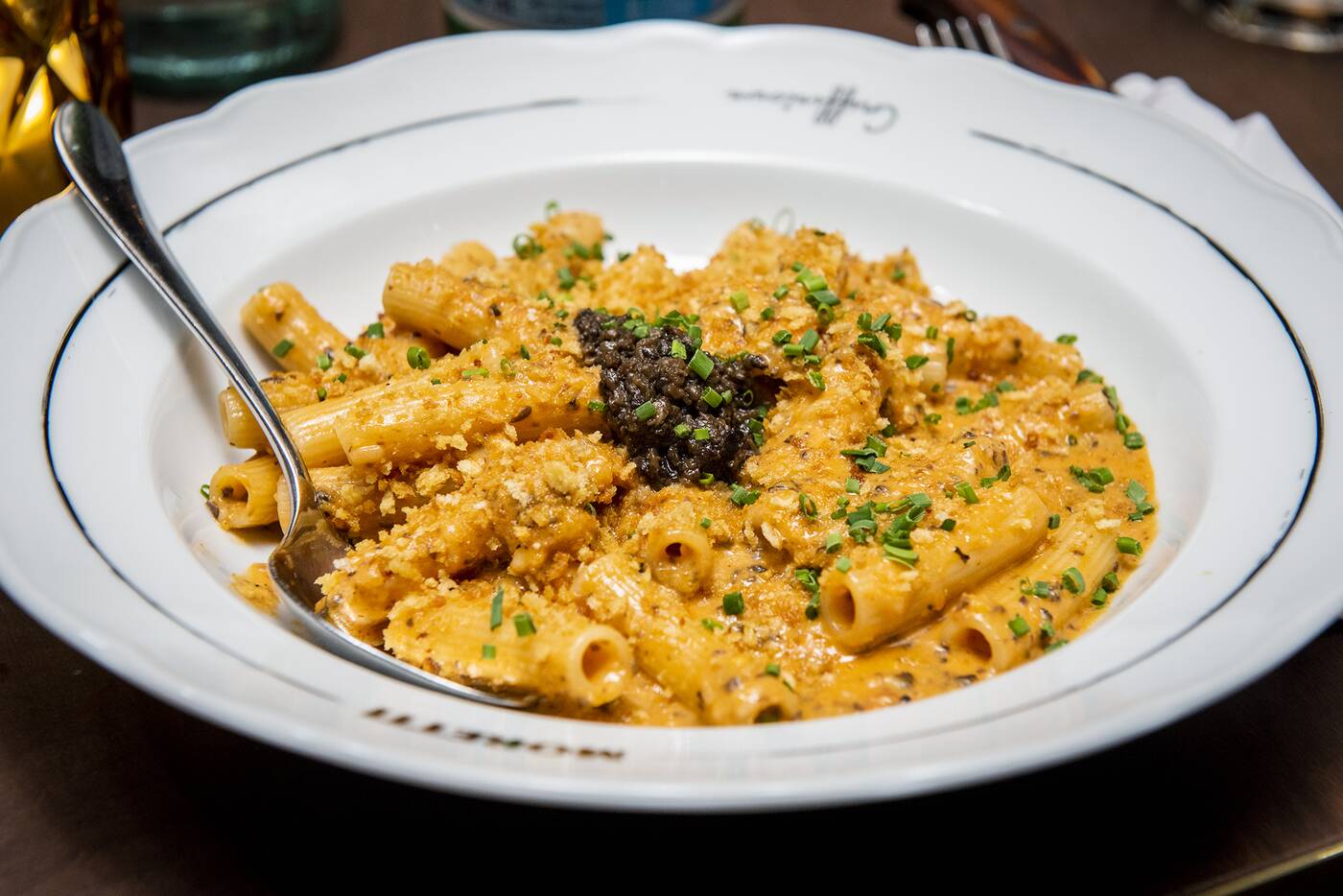 Moretti serves up an elevated take on a traditional mac and cheese. Photo by Hector Vasquez.

The mac and cheese at Mugshot Tavern consists of a five-cheese cream sauce, caramelized onions and smoked bacon with a house salad on the side.

Montreal restaurant Moretti has brought their pricey mac to Toronto. For $30 the dish is taken to the ultimate level. Noodles are smothered in a sharp yet creamy mix of Mimolette, Fontina, aged cheddar, parmigiano-reggiano, finished off with truffle paste.

Hogtown Vegan is Toronto's source for vegan comfort food. Their baked Mac 'n Cheez is topped with herbed breadcrumbs and has a number of add-ons like Spicy unChicken. 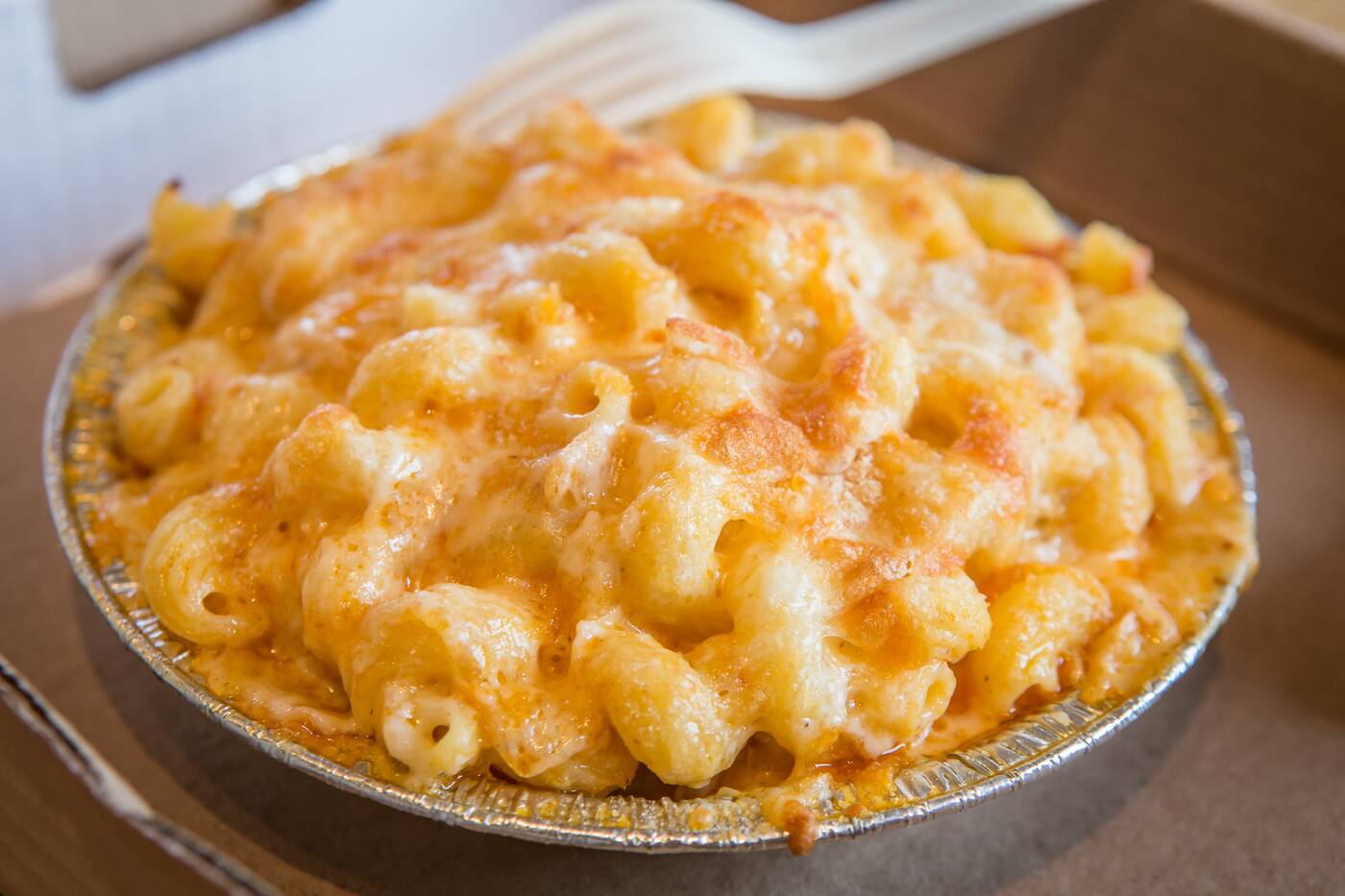 It's always a cheesy affair at Bobbie Sue's. Photo by Jesse Milns.

United Bakers Dairy does the gooey, cheesy comfort food as an app and as a dinner with a side of Caesar salad and a bagel.

Bobbie Sue's is a mac and cheese centric spot where the menu has an abundance of options. The classic starts with a five cheese blend, while the Camp Mac has yellow mustard mixed in along with a sliced all-beef hot dog.

It's all about Southern-style food at Cherry Street Bar-B-Que. Order up copious amounts of meat and complete the meal with a side of creamy mac and cheese.

Parka Food Co. is a plant-based restaurant with a mission to make eating veggies fun. One of their fun-filled dishes is Mac N' Cashew Cheese. You can get it classic or opt for their truffle mushroom. 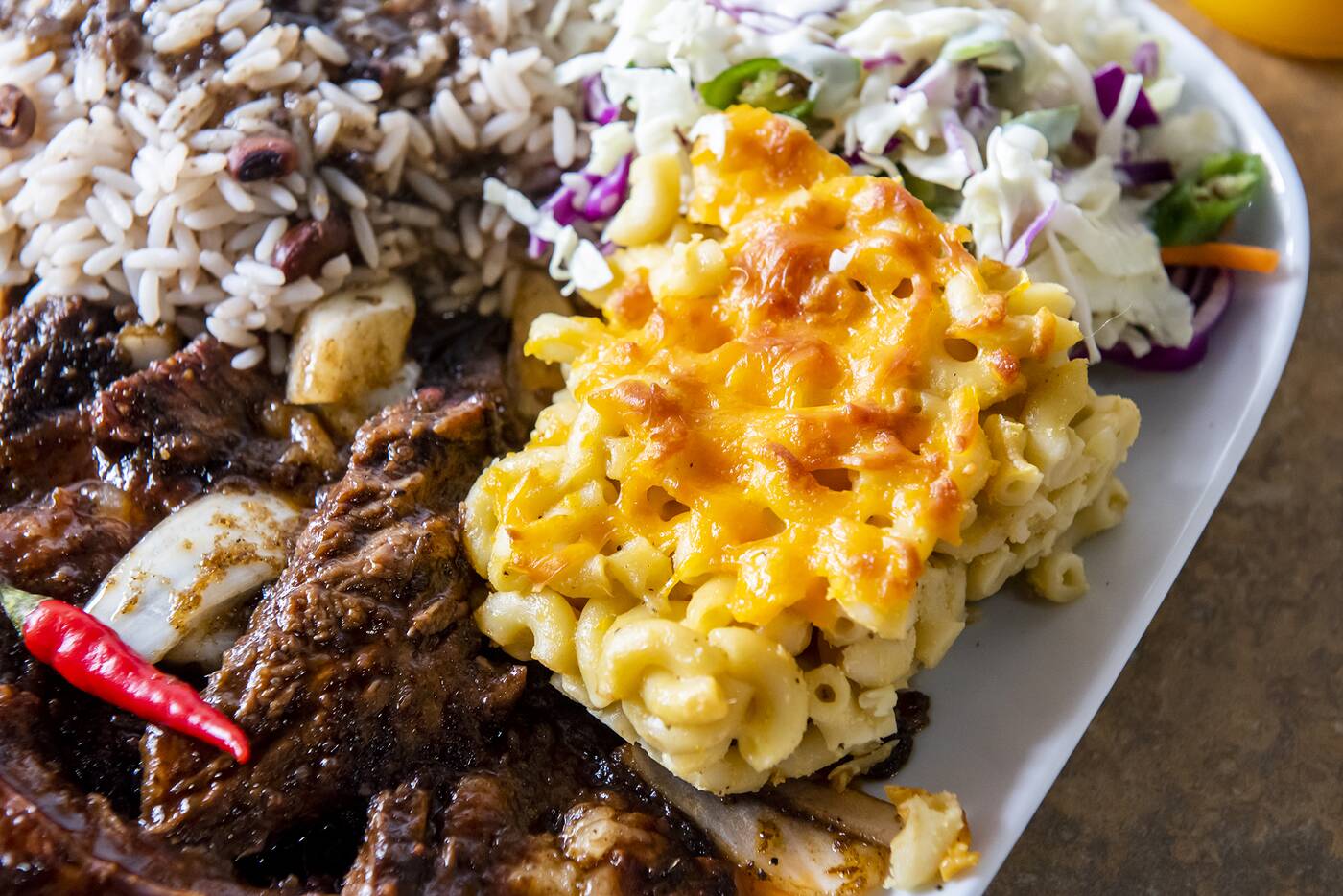 Art of BBQ doesn't mess around when it comes to mac and cheese. Photo by Hector Vasquez.

Any good barbecue joint in Toronto needs a tasty mac and cheese side. Barque is no exception to this. Cavatappi, smoked butter, cheese sauce, and seasoned, toasted panko make up their Cajun mac and cheese.

Ol' Macki's Back at the Rebel House is a mac and cheese casserole that features plum tomatoes and green onions in a cheddar cream sauce. Kettle fries comes on the side.

Art of BBQ is a smokehouse doing southern-style barbecue and soul food. When you order your main don't forget to get it with a side of mac and cheese with a tasty cheese crust.

Harbour Sixty is one of the best steakhouses in Toronto. While the steak may be what you're going for it's the white truffle mac and cheese that you'll be praising at the end of the meal. 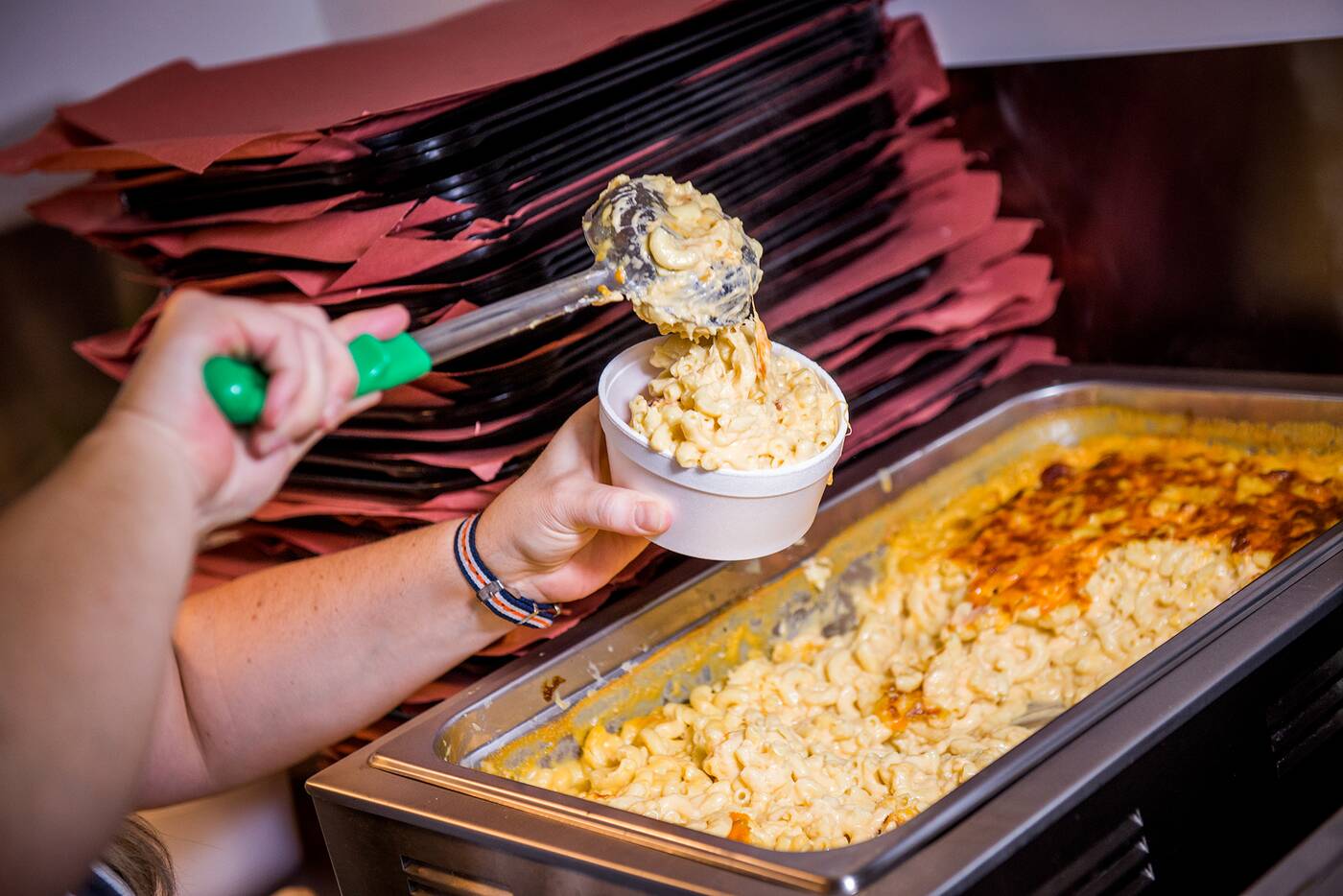 Mac and cheese is the perfect side dish at Beach Hill Smokehouse. Photo by Hector Vasquez.

Whether you're getting the mac and cheese at Smoque N Bones as a side dish or the main event, you won't be disappointed. Each offering is made with sharp white cheddar and topped with garlic and herb breadcrumbs.

7 West serves up mac and cheese at all hours. The dish is simple and is made with aged cheddar and parmesan cheese, with elbow noodles.

One of Toronto's oldest restaurants, The Senator, has Macaroni & Cheese composed of elbow noodles with a mix of cheeses topped with breadcrumbs and parm, and served with salad on the side.

Mary’s Mac + Cheese and Mary Be Kitchen has a mixed of sharp cheddar and gruyere cheeses then finished with crispy panko. Yum!

Hector Vasquez at Dope As Duck. With files from Jaclyn Skrobacky and Liora Ipsum.