Uncle Ray's is currently open but their offerings and services may be affected due to the pandemic. Please contact the business directly for more information about any changes. Is this your business? Please contact us if you would like to update this message.

This massive restaurant comes from the same team behind Amano, Carbon Bar, and Union Chicken, taking its namesake from one of the latter's most popular dishes: the Uncle Ray's Lightning Chicken. 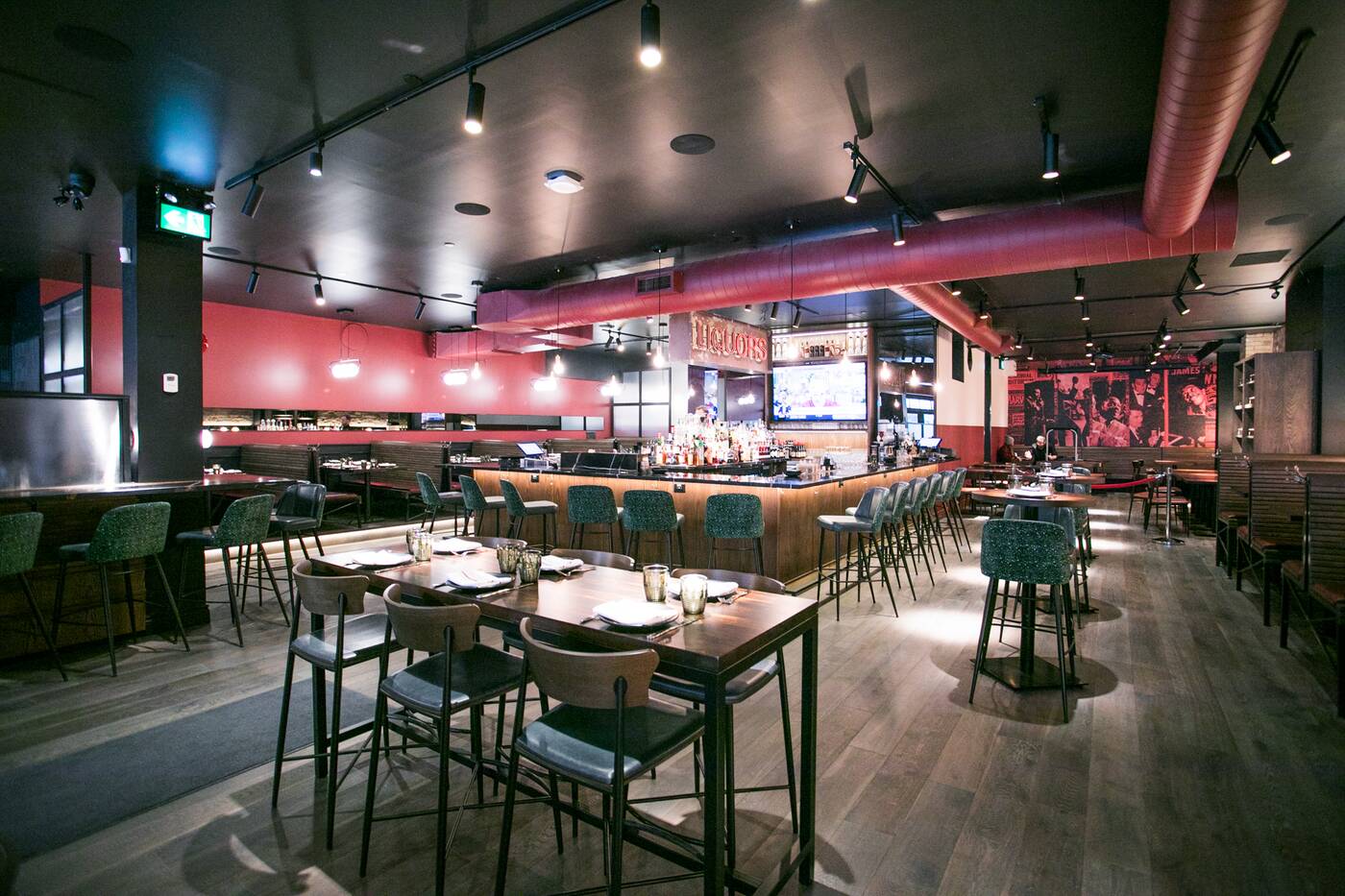 According to the owners, Union's take on Nashville hot chicken was so popular, it was enough to spawn a brand new food concept of its own. 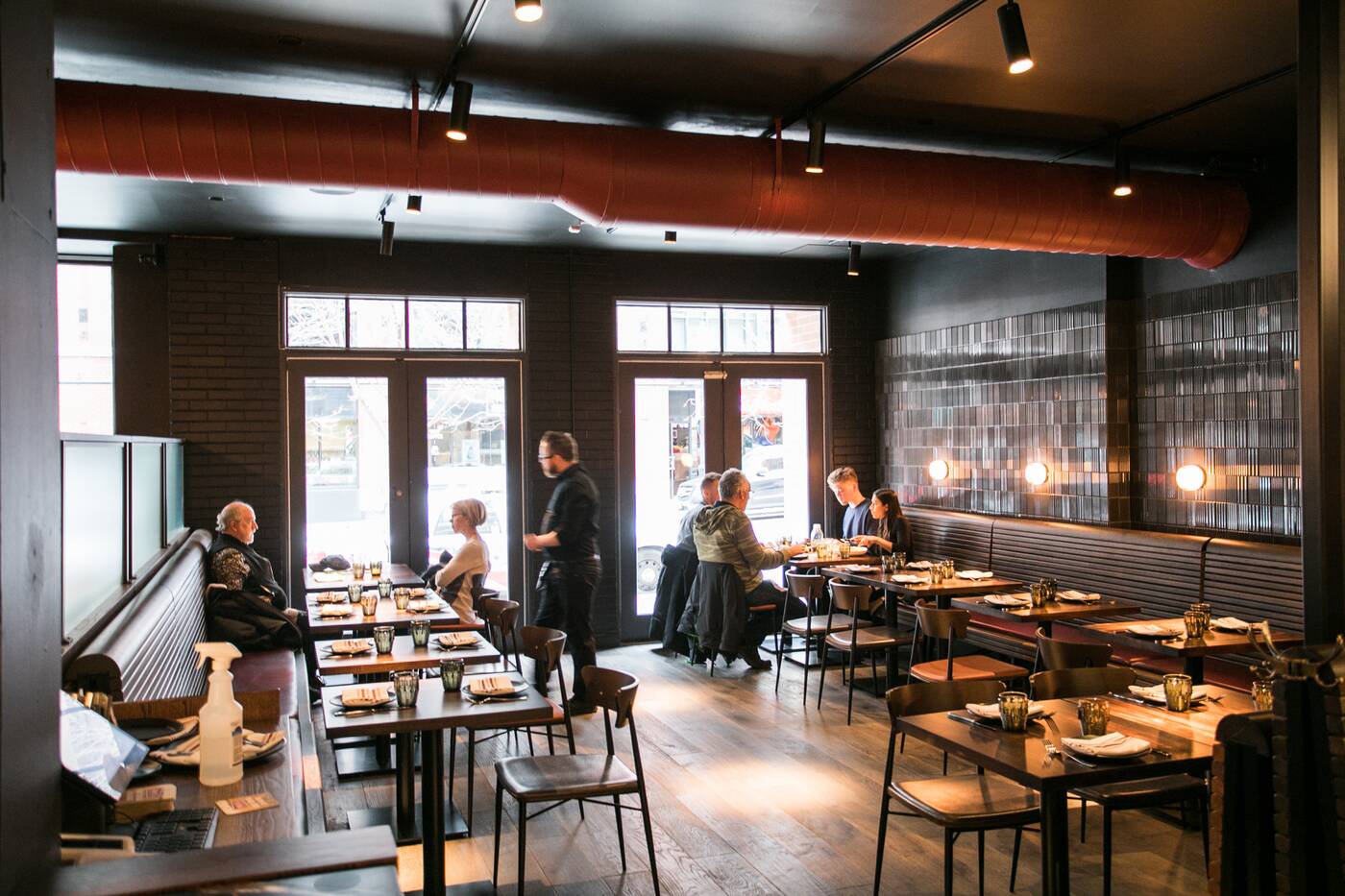 There are multiple  sections in the space, including areas that can be curtained off for private parties, a snack bar, and a massive projector screen for big sports games. 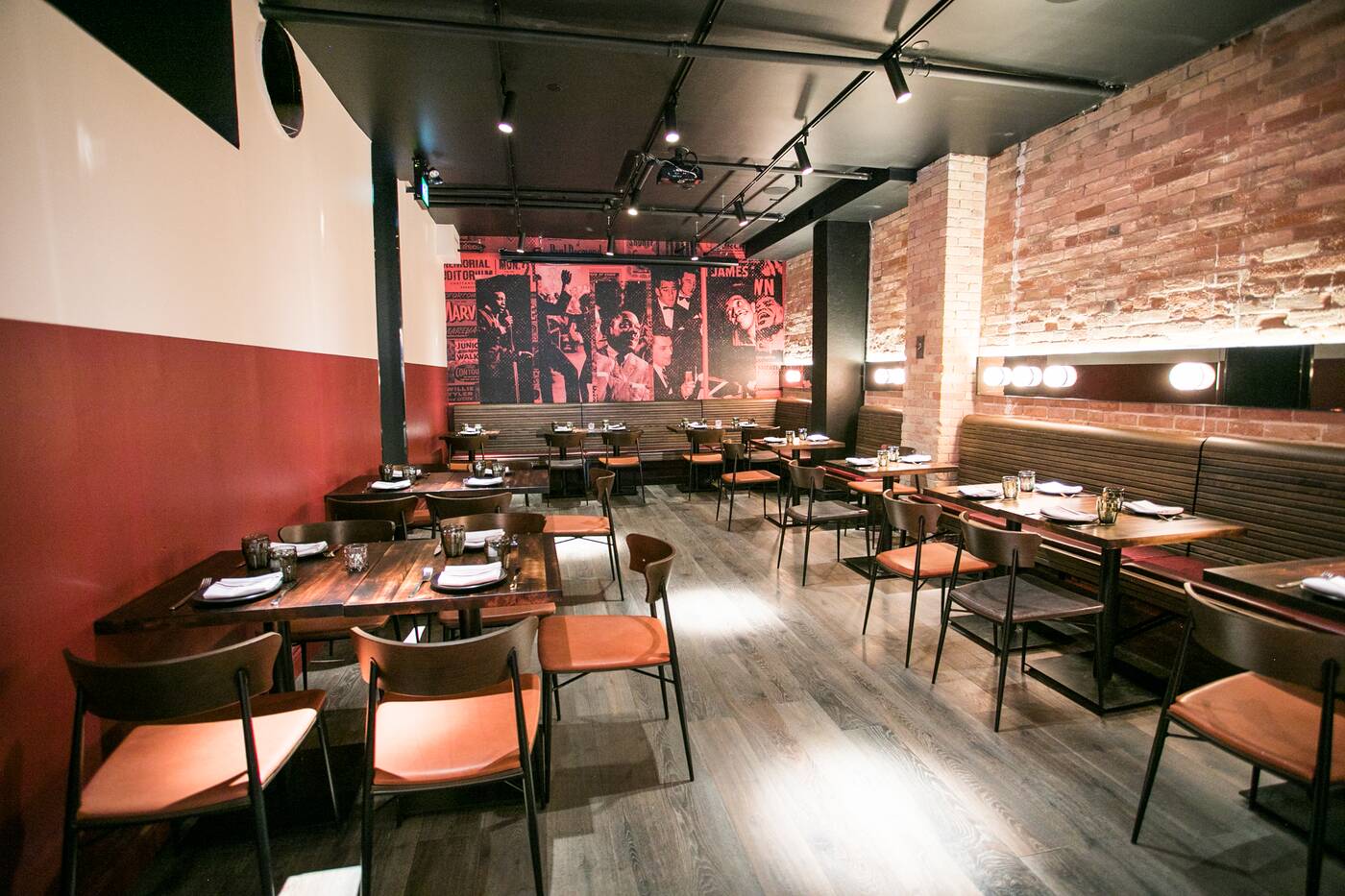 The mysterious identity of Uncle Ray (not a real person, by the way) is kind of a running theme here—one that got the restaurant in hot water before it even opened its doors. 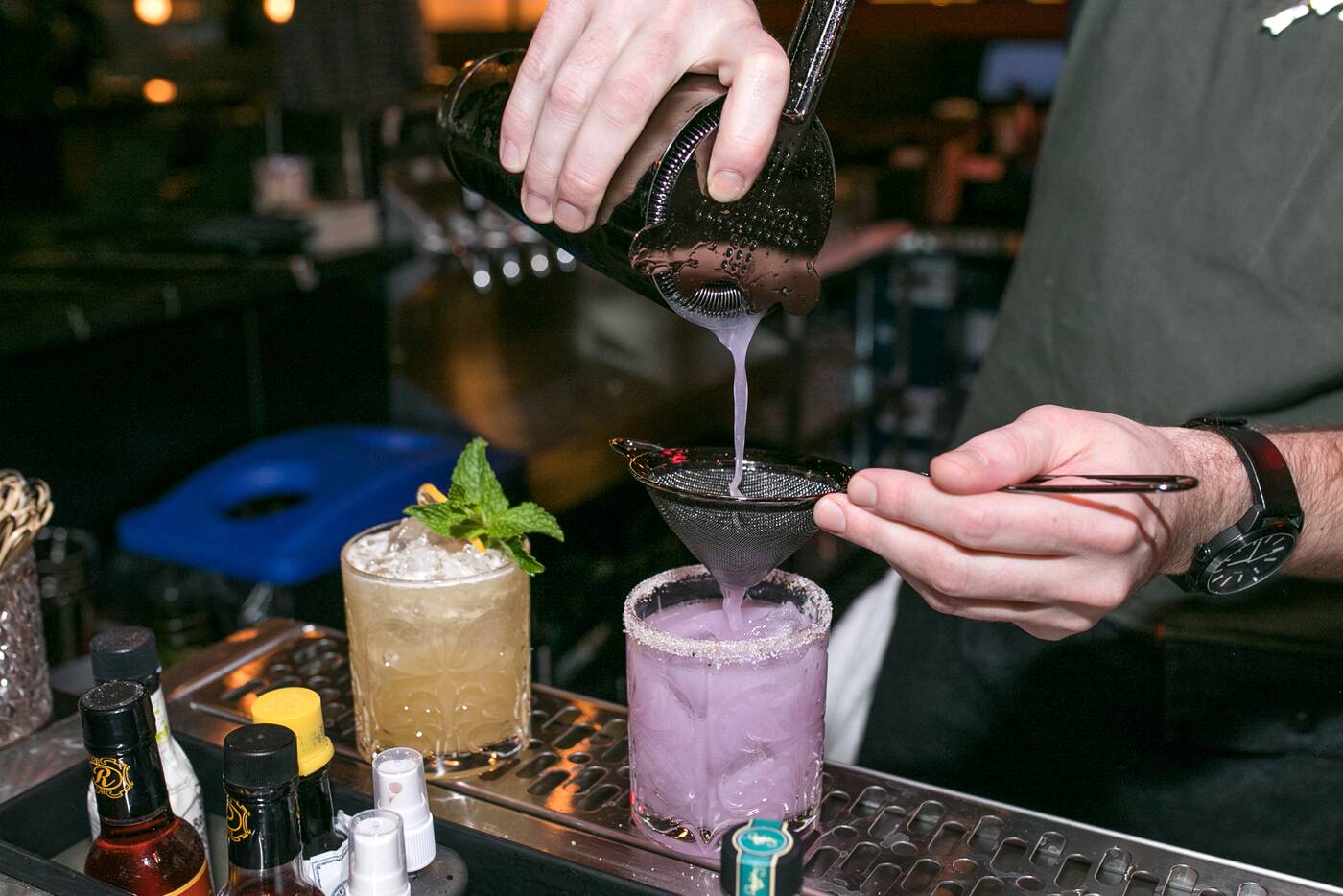 The brand has since resolved itself, and the whole thing now only feels as messy as the menu—a hodgepodge of inspired by-but-not-strictly Southern gravies, hot honey glazes, and melty cheese.

Items off the lunch menus are essentially the sandwich versions of things you'll find on the dinner menu, which features more shareable dishes. 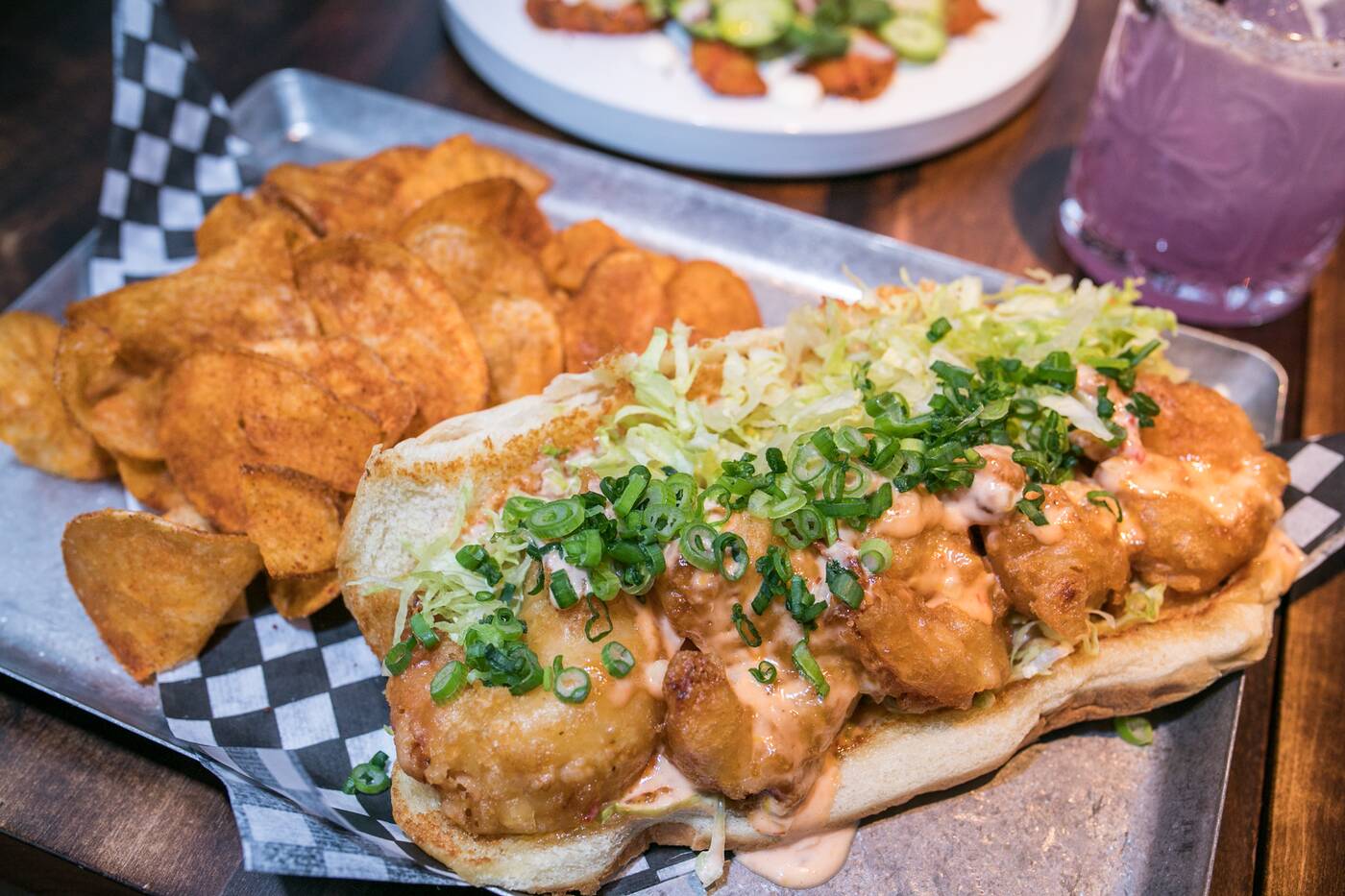 The shrimp po'boy ($21) is Labatt 50 beer battered shrimp on top of a Martin's Potato Rolls bun with some potato chips spiced with a Route 86 mix. 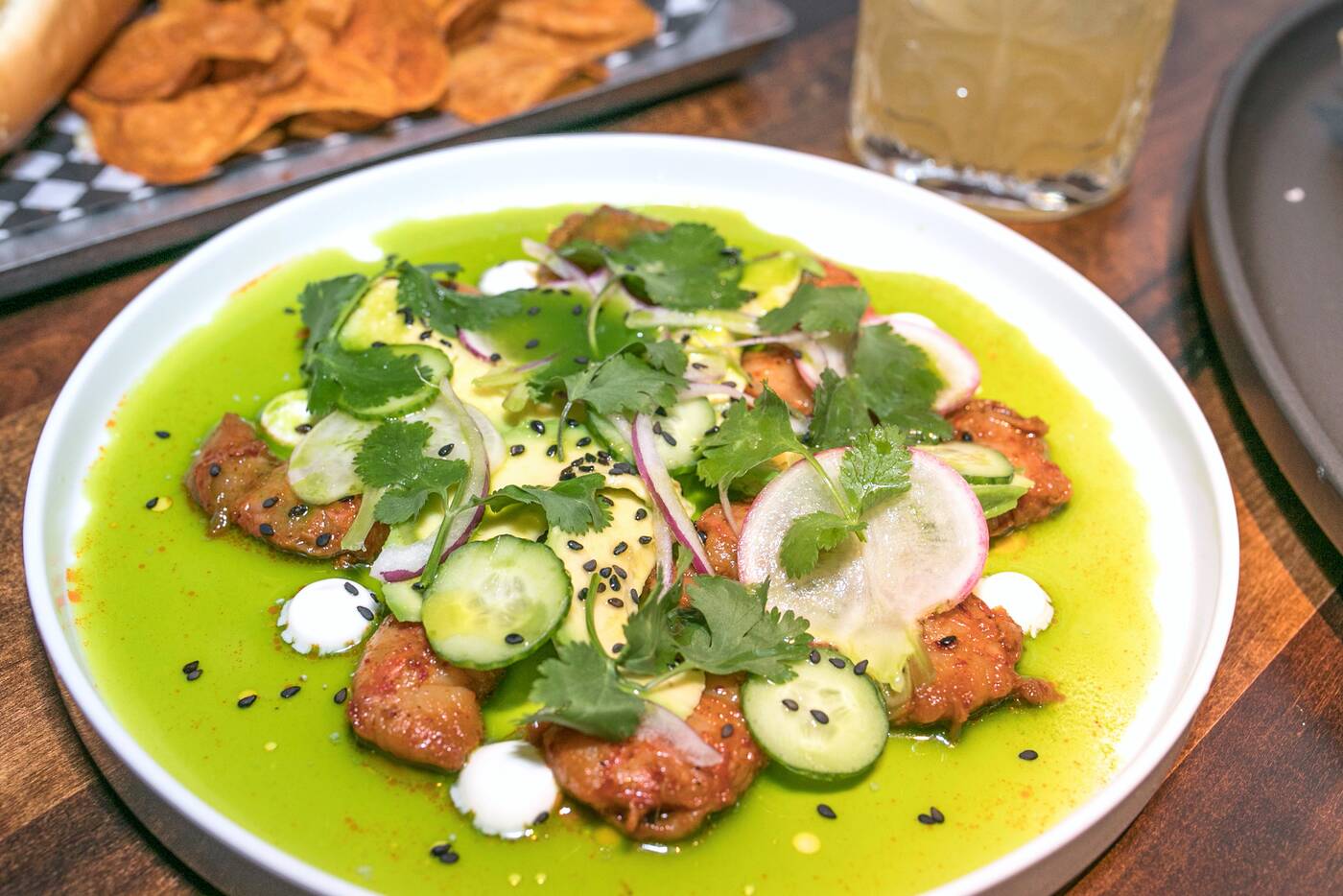 The Argentinian red shrimp aguachile ($16) is a dinner appetizer that makes the Mexican dish with Argentinian shrimp, avocado, sesame, cucumber, and serrano chili. 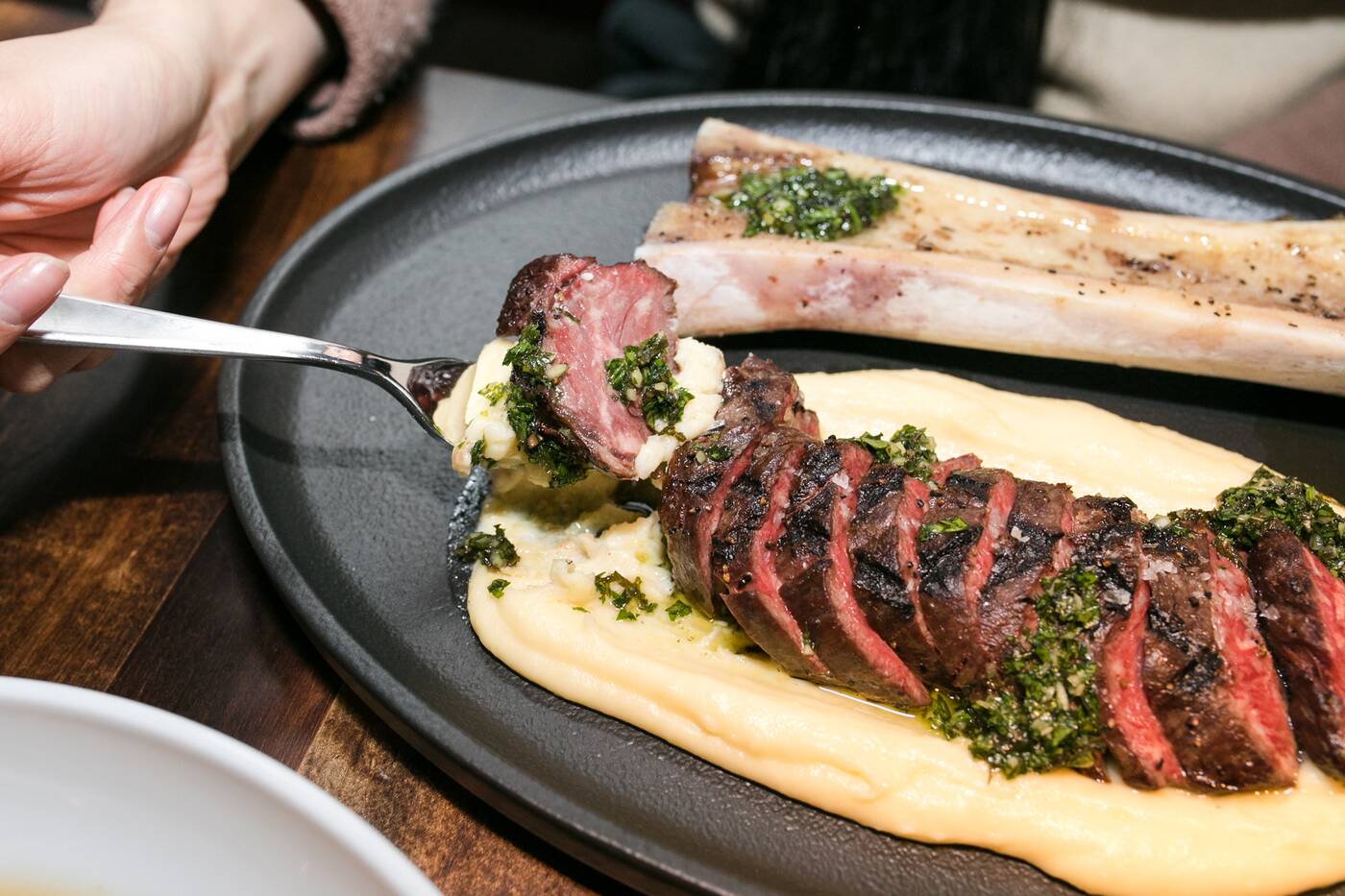 Steak and potatoes ($29.50) is really a sous-vide hanger steak, poached in butter and then grilled. 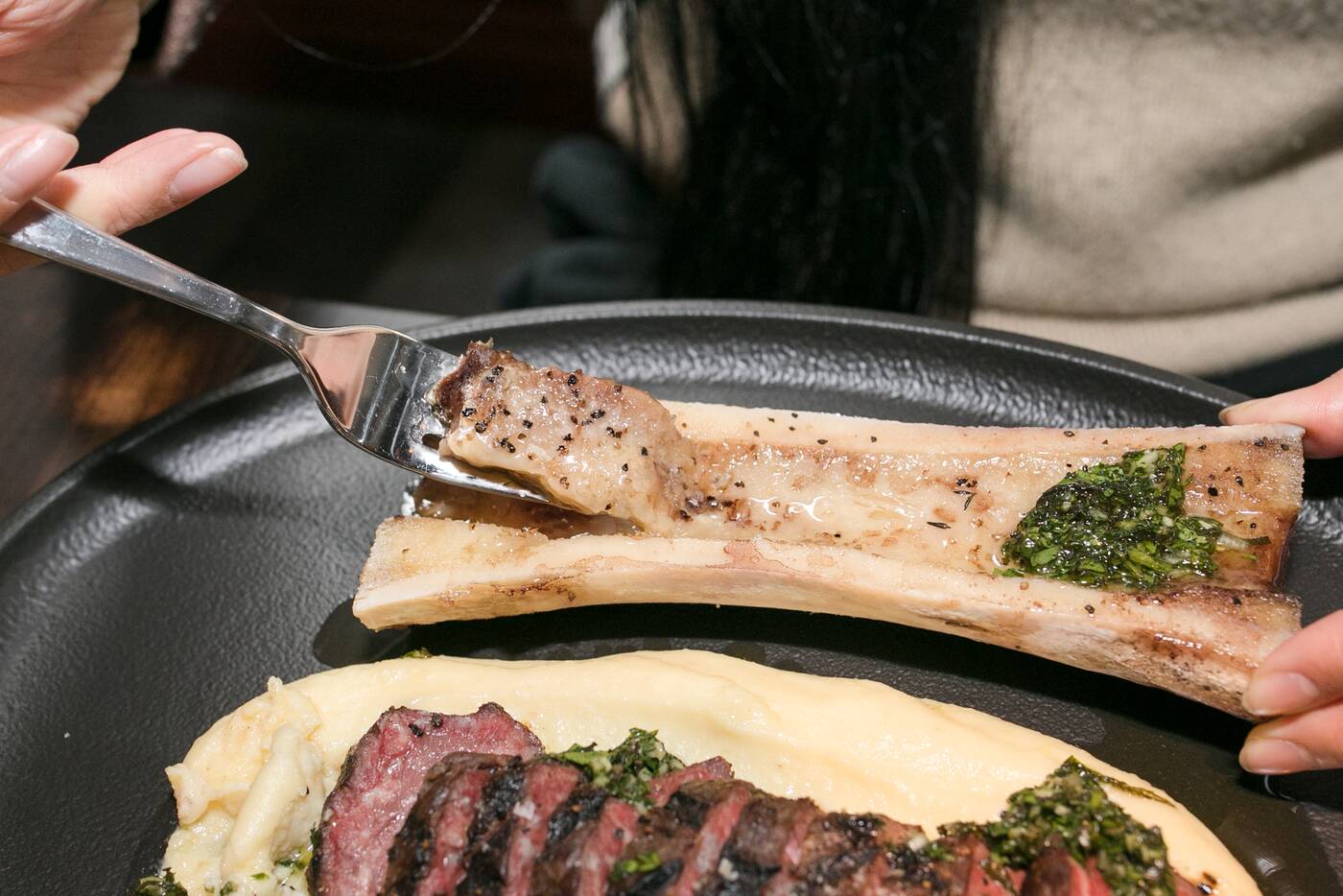 Mashed potatoes are made fresh every day before dinner service, and the roasted bone marrow is served with bourbon, calvados, or fernet on the side. 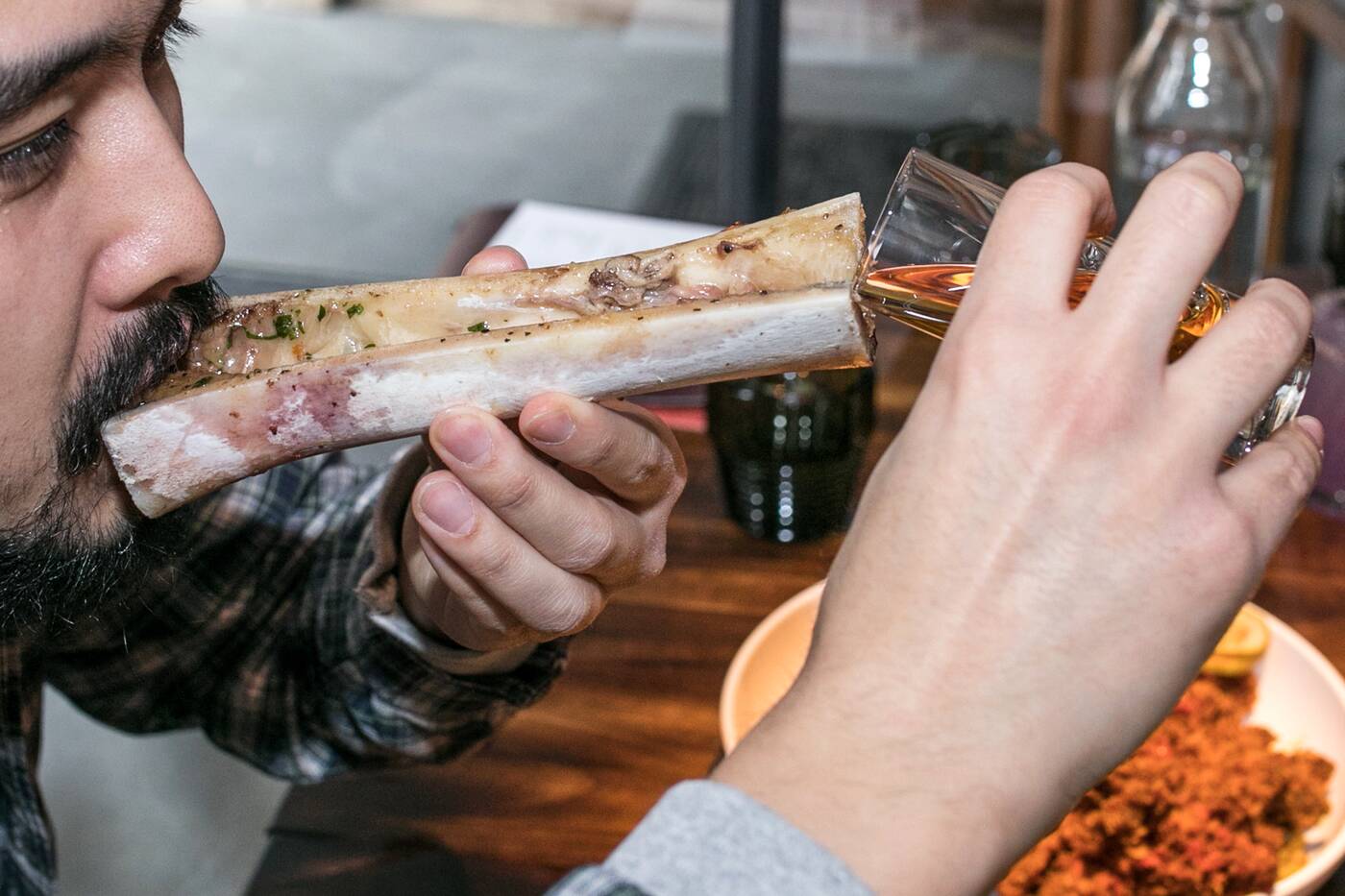 When done with the ultra fatty marrow, which is topped with a salsa verde, you're meant to use the hollow of the bone as a luge for your shot. It's totally extra, pretty impractical (beware dripping oil), and hilarious. 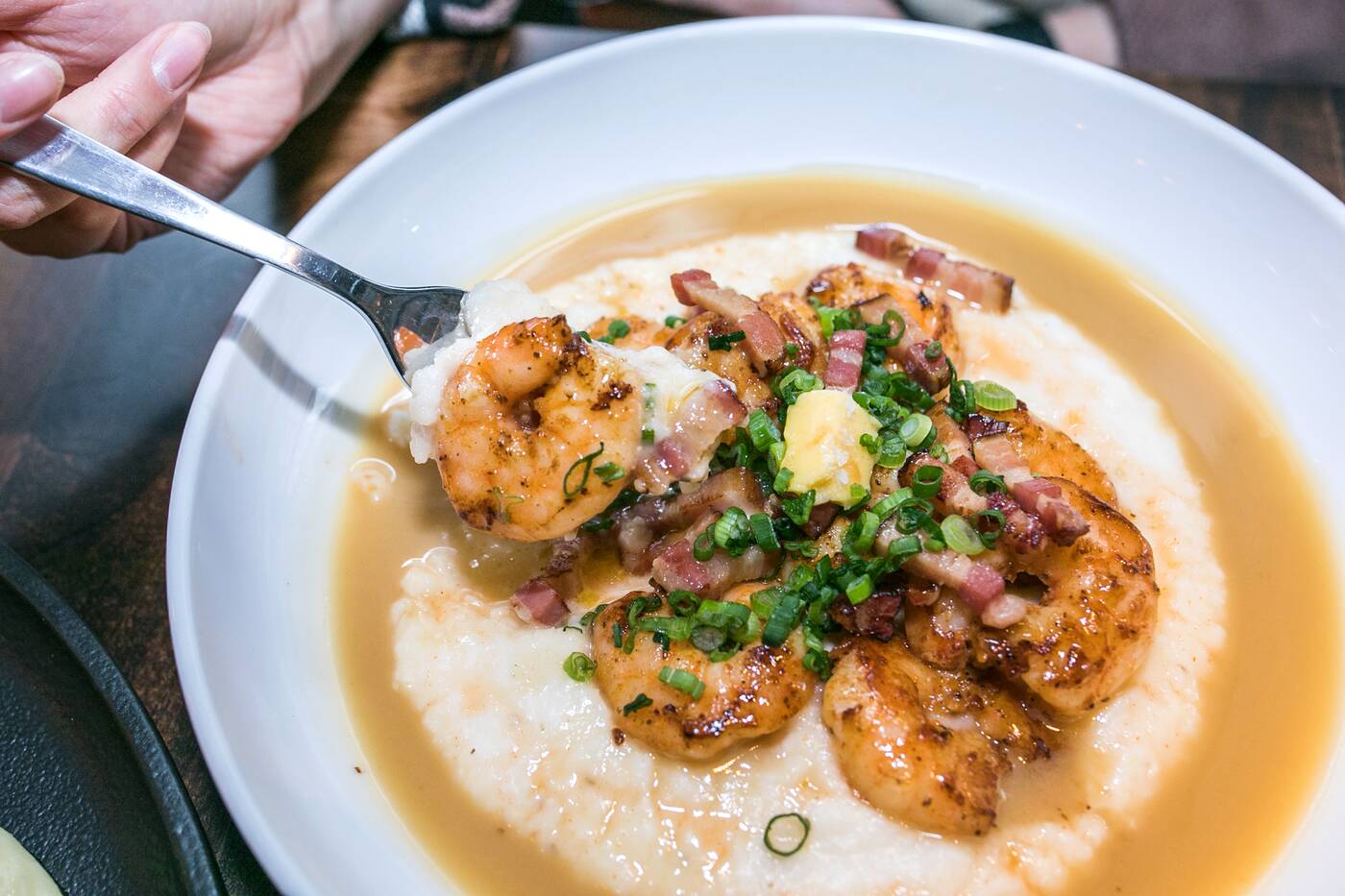 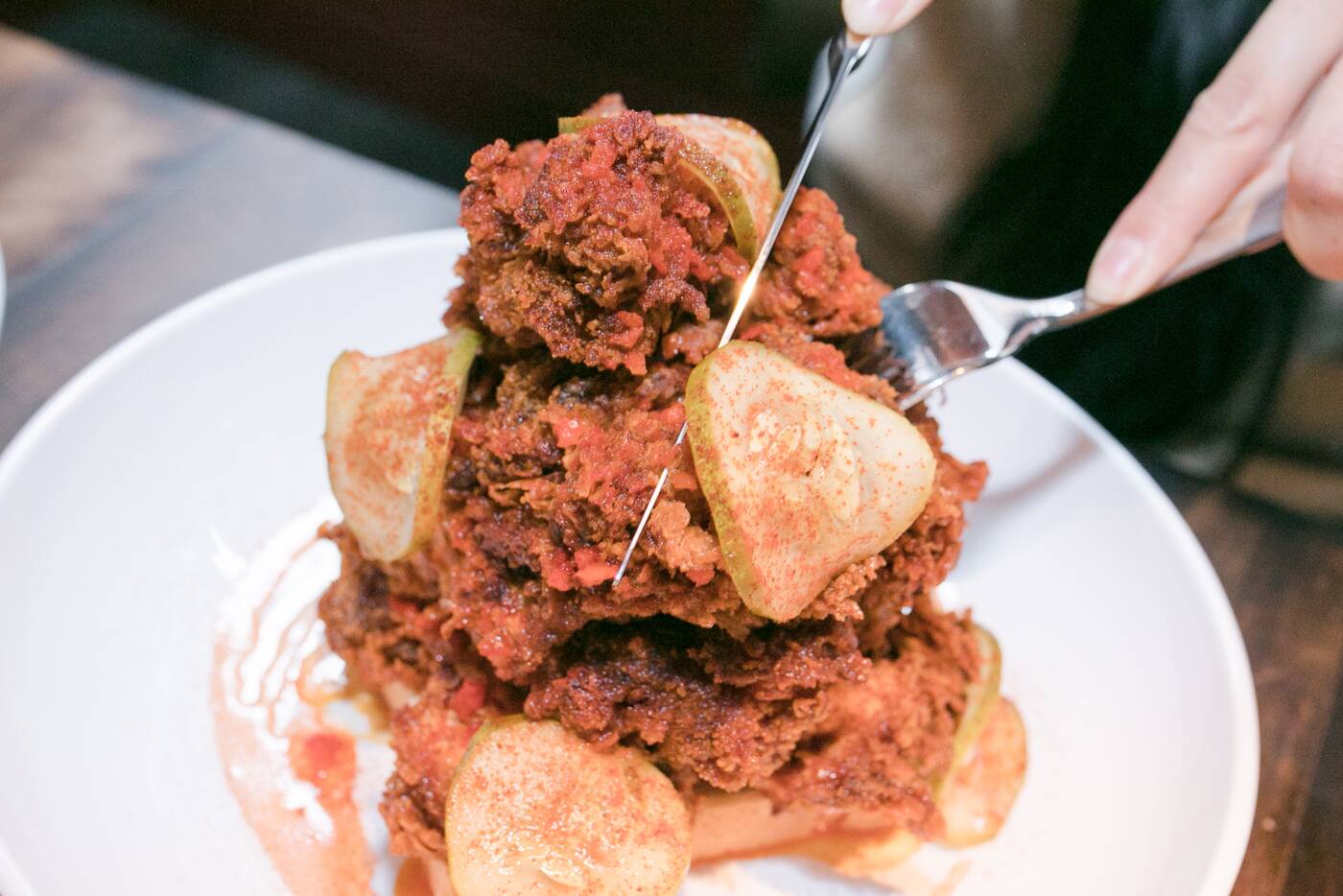 The piece de resistance is obviously the Lightning Chicken plate, two legs' worth of buttermilk chicken with hot honey, and pickles on a single piece of white bread.

The key is just to thrust your knife into the pile, slicing through the huge stack of chicken. The spiciness comes from the fact it's dunked in three layers of heat: spicy pork fat, with cayenne pepper, and habanero hot sauce. 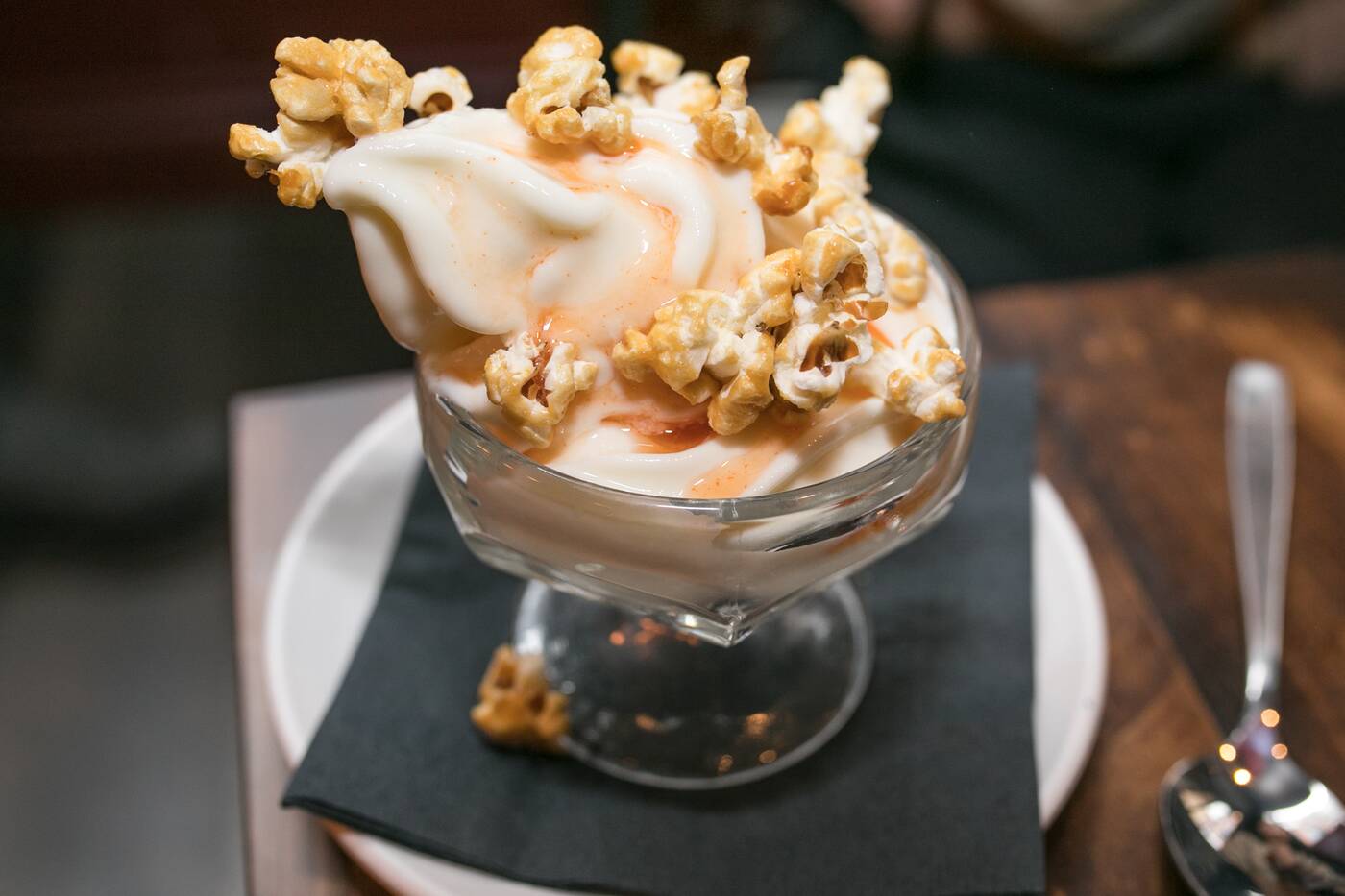 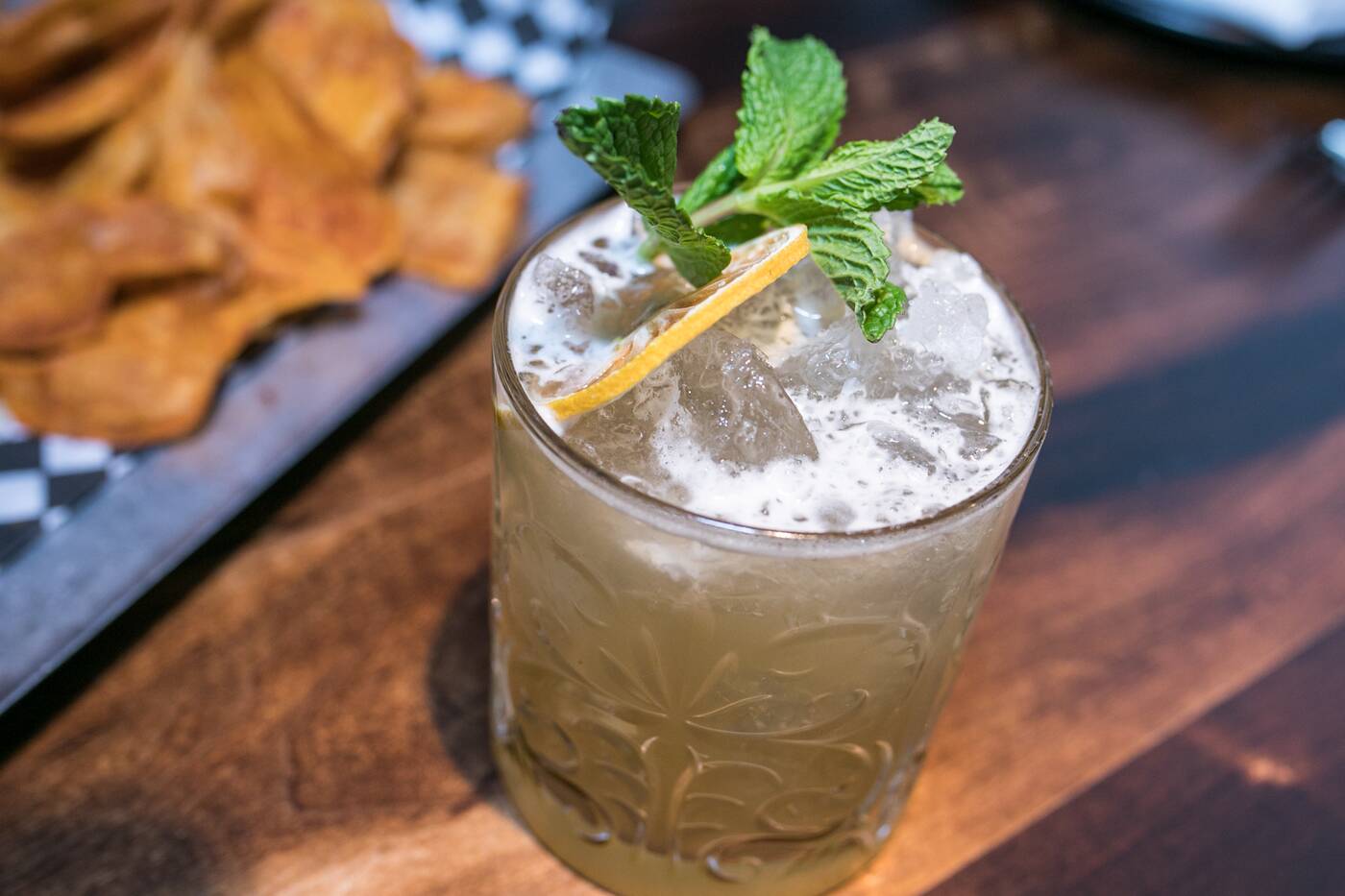 Aside from draught beers and some large reserve bottles, there are signature cocktails like the Smash Bros ($15), served with Buffalo Trace bourbon, lemon, mint, and orange blossom. 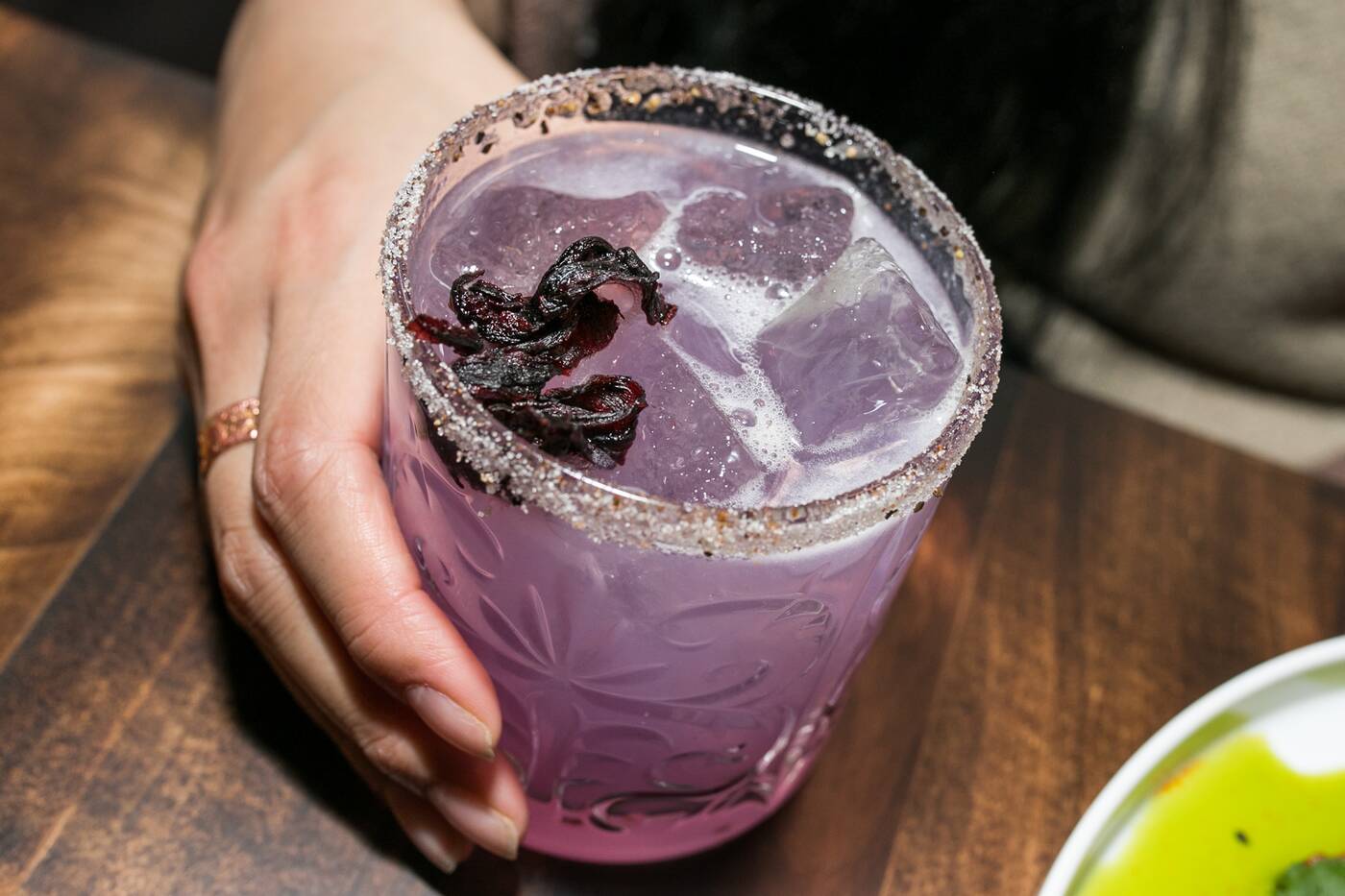 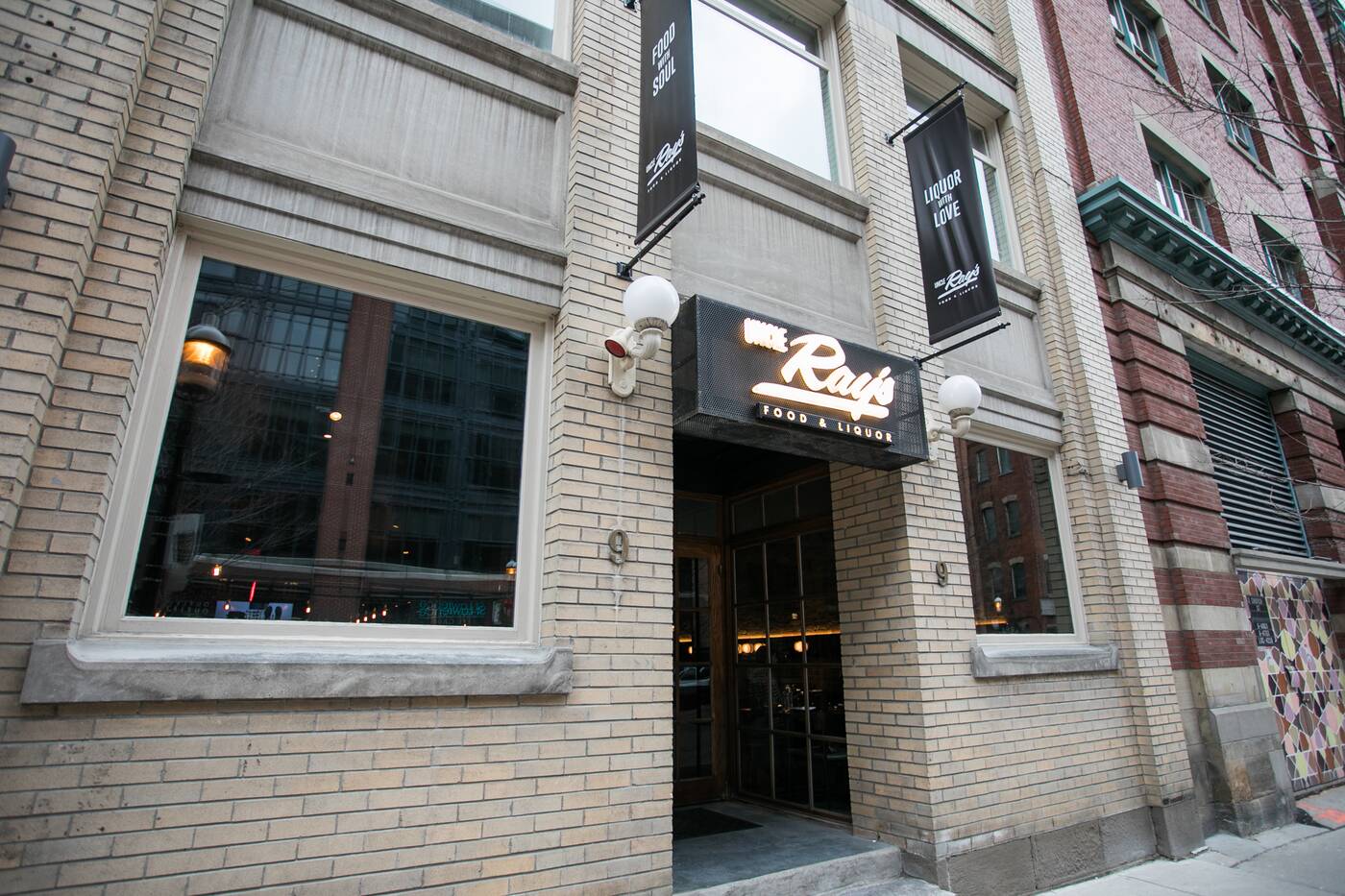