Blackjack BBQ is a restaurant and whisky bar that replaced Loaded Pierogi but is run by the same team, who also have Chula Taberna just a few doors down.

This is less a place to get traditionally smoked trays of meat sold by weight and plated up on butcher paper as it is a local hangout with its own take on classics like wings, ribs, and mac n’ cheese. 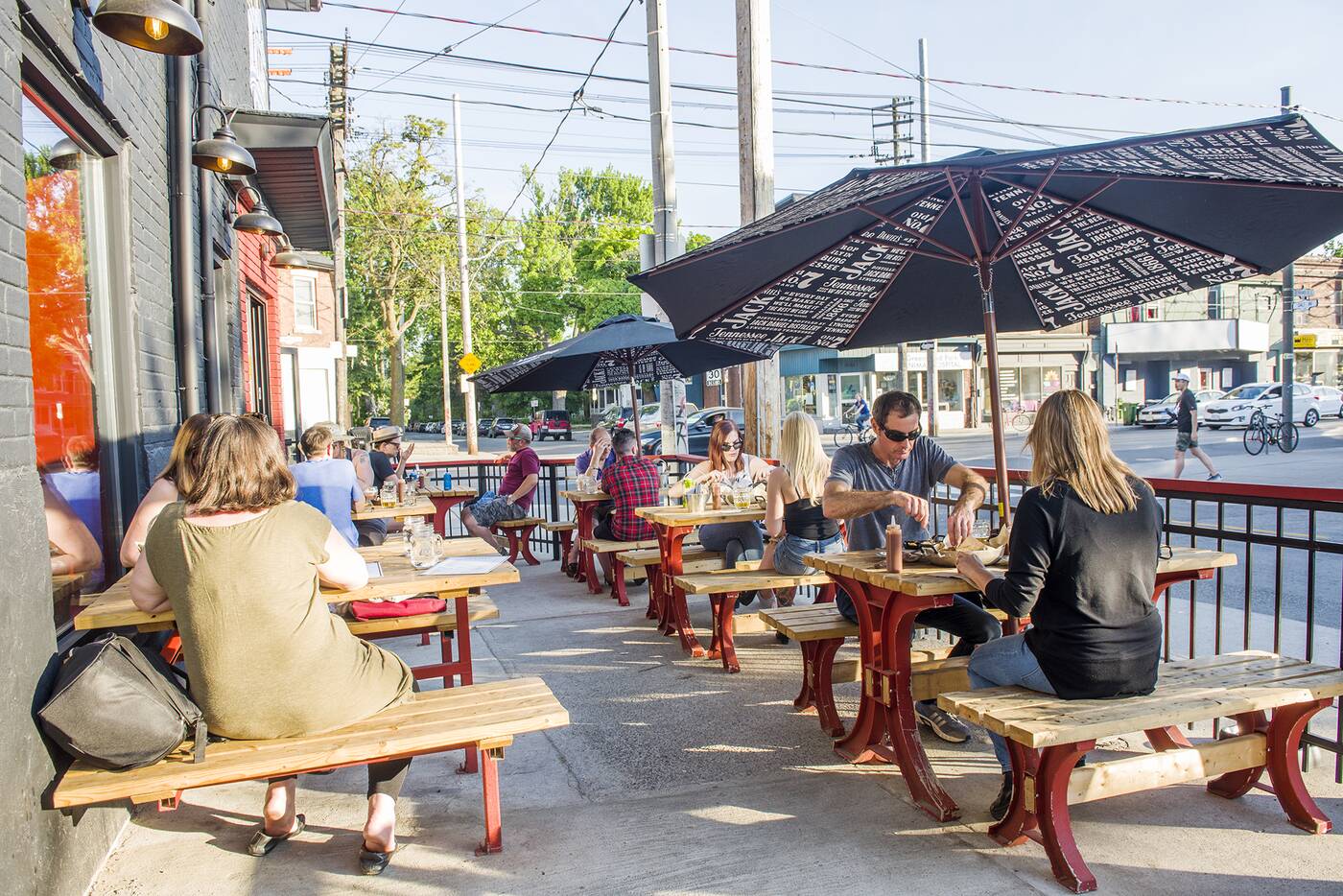 The Dead is piping over a decent sound system (a whisky barrel hides a subwoofer) as I walk through the door, and customers take their seats at picnic tables on the patio. 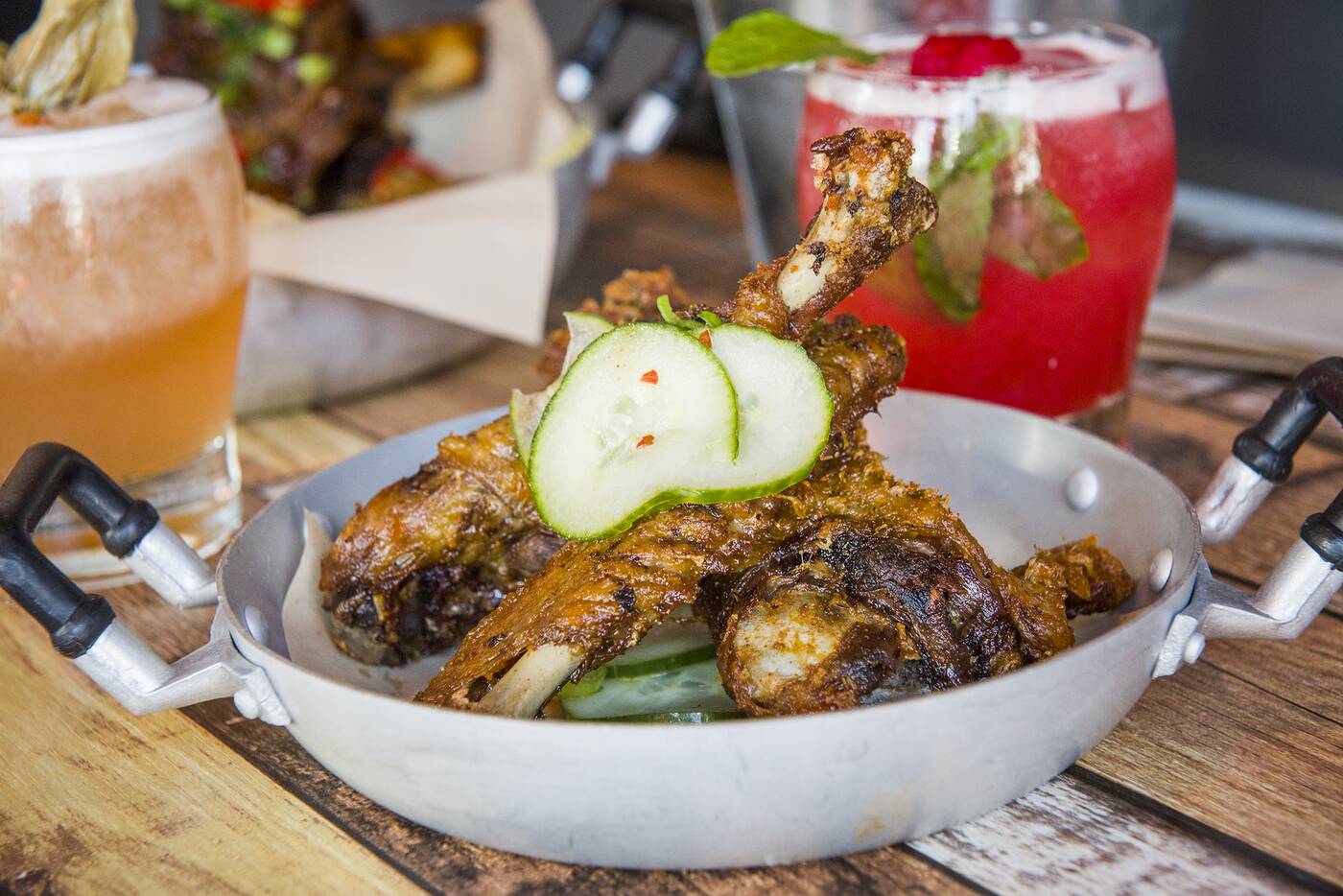 Countdown Duck Wings ($9) are quickly dry smoked in the oven, confited for a short amount of time, deep-fried and given a classic 5-4-3-2-1 rub but with smoked paprika. 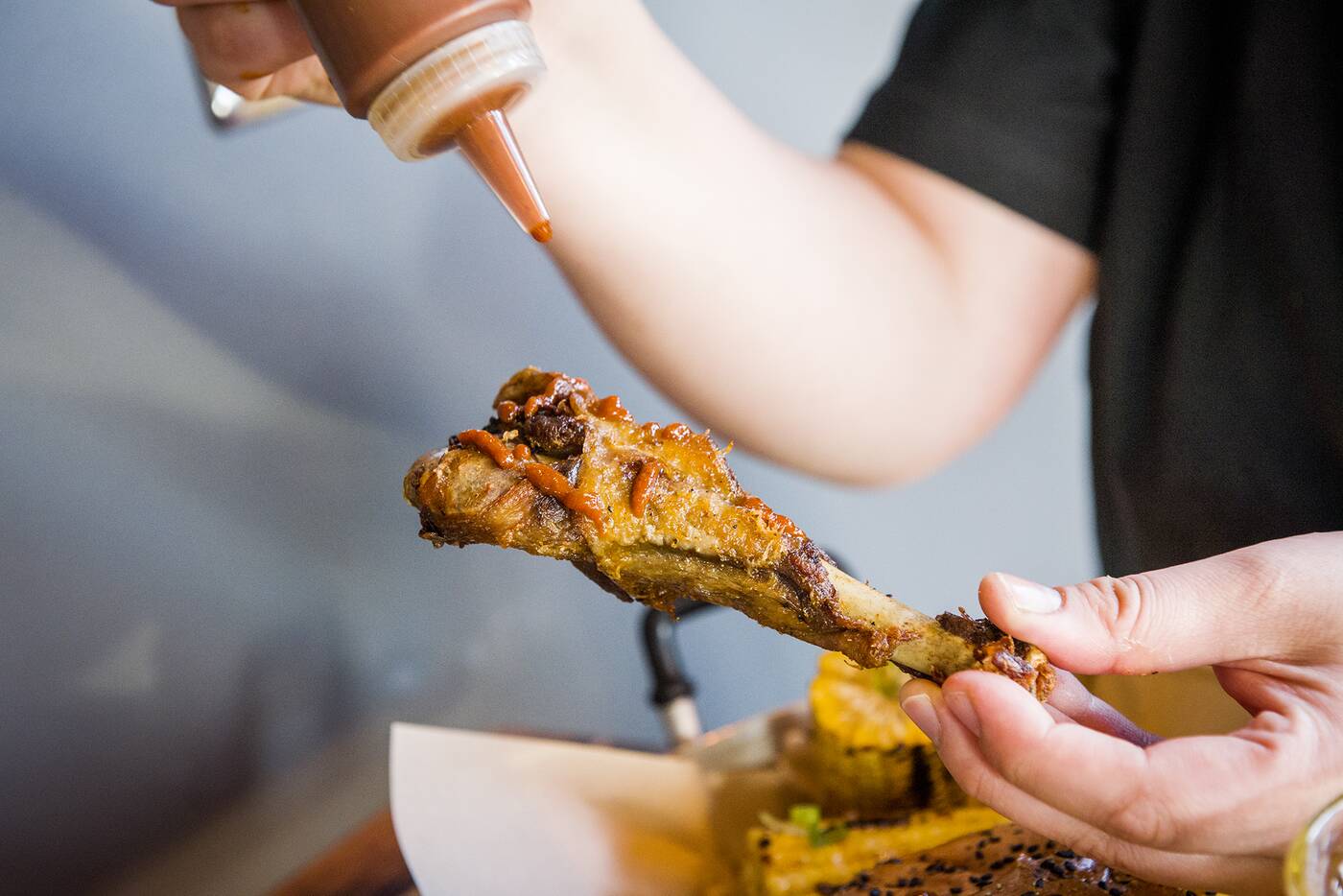 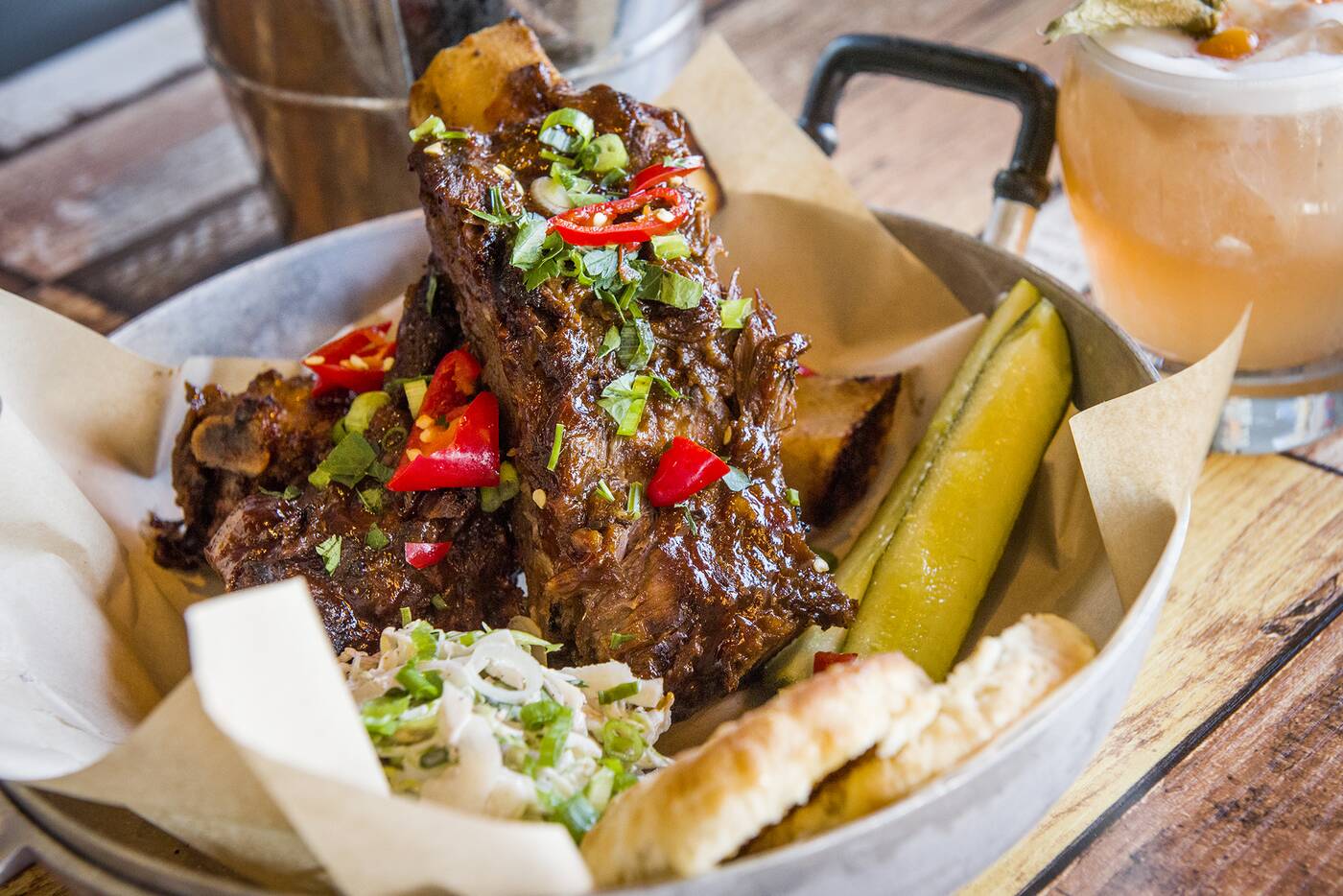 Beef Side Ribs ($25) are smothered in a Texas Bold BBQ sauce that basically consists of the usual molasses base with onions and tomato, giving the caramelized exterior a lovely lacquer and sweetness.

The meat could pull away more cleanly from the bone, but has a deep, addictive beefy flavour and the portion is massive enough to share.

“All-In” mains are always served with a biscuit, pickles and a side, for us a creamy crunchy brussels slaw dressed with their Alabama white sauce. 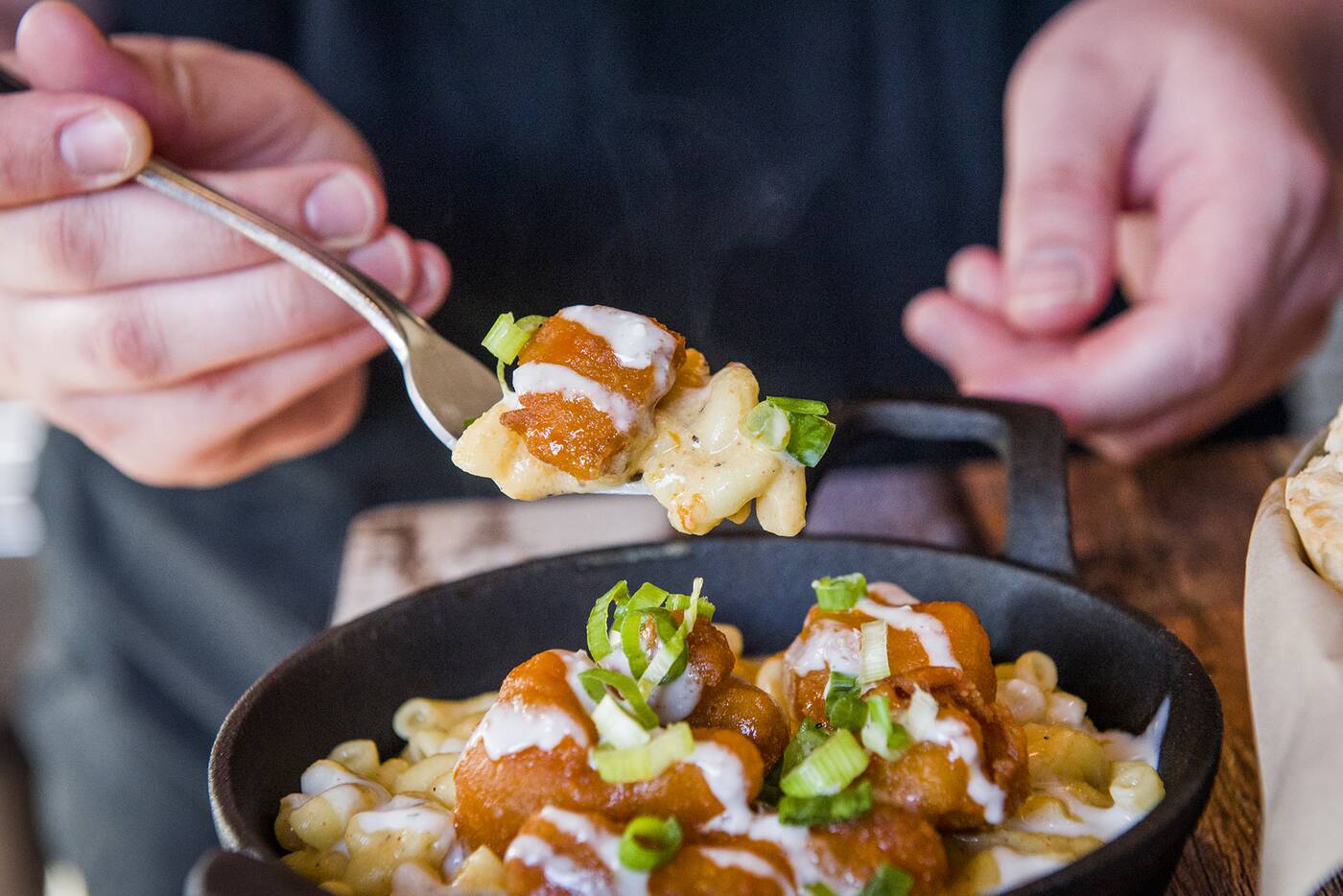 Cauliflower Mac n’ Cheese ($11) is part of the “Ante Up” shareables section though it could also be seen as a side. Cheese sauce is more thin and silky than thick and gooey, and it works well with buffalo tossed cauliflower and blue cheese ranch drizzle. 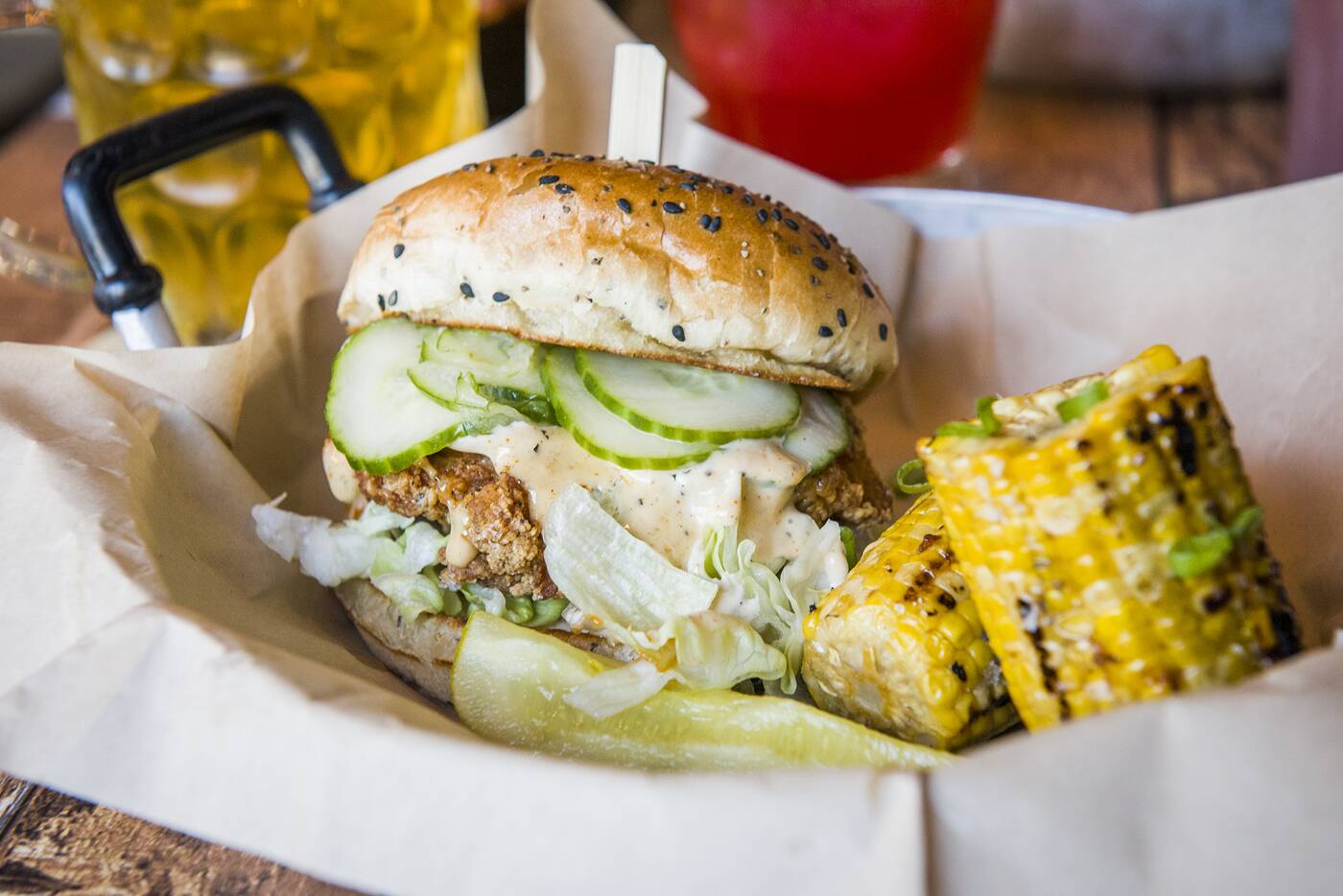 Nashville Hot Turkey ($15) is one of two initial sandwiches with pickled cucumbers and Alabama white sauce that cut through the slight heat of the turkey. 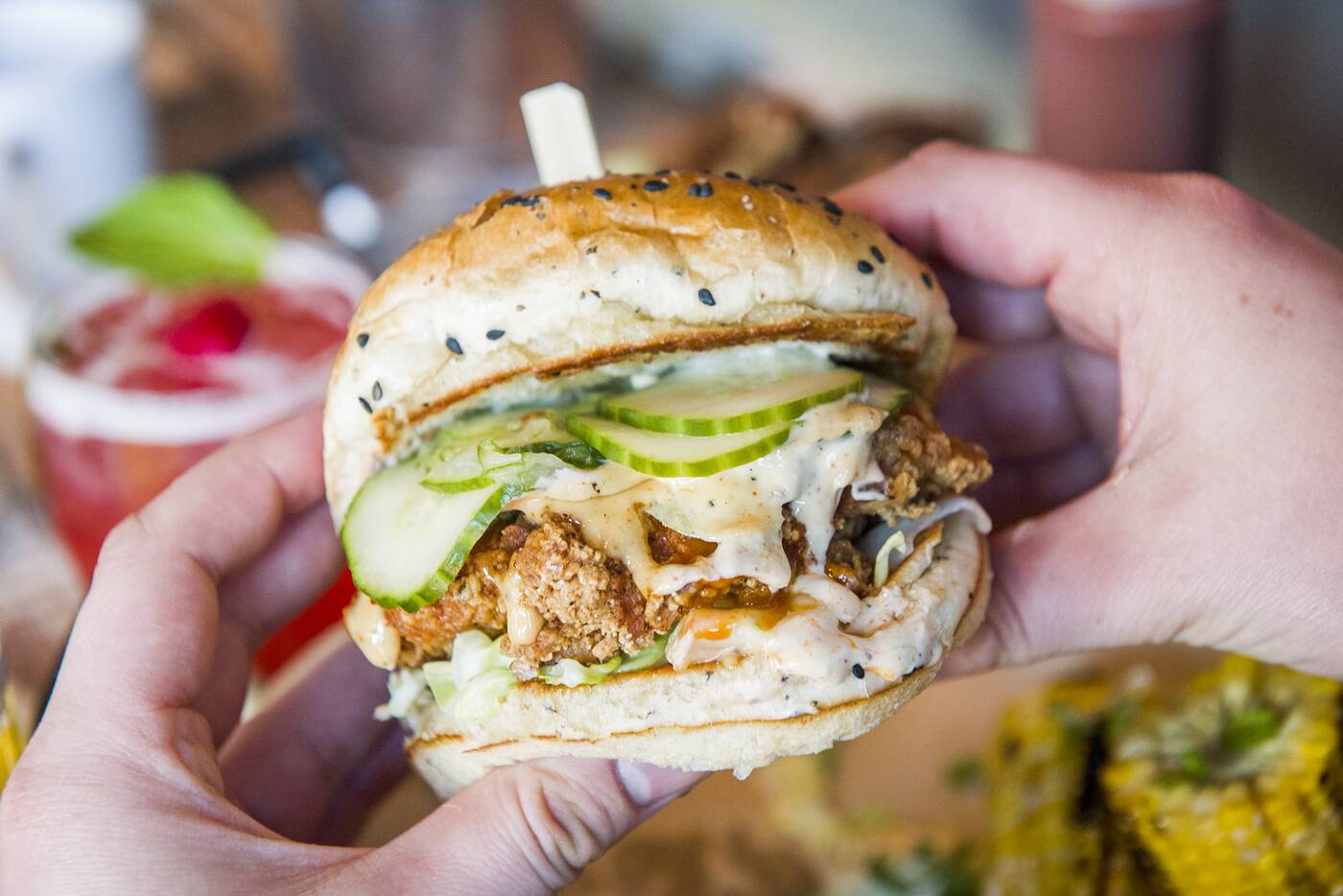 This isn’t a challenge, though, unlike some “Nashville Hot” items. We do some backyard-nostalgia-level buttery charred corn for a side. 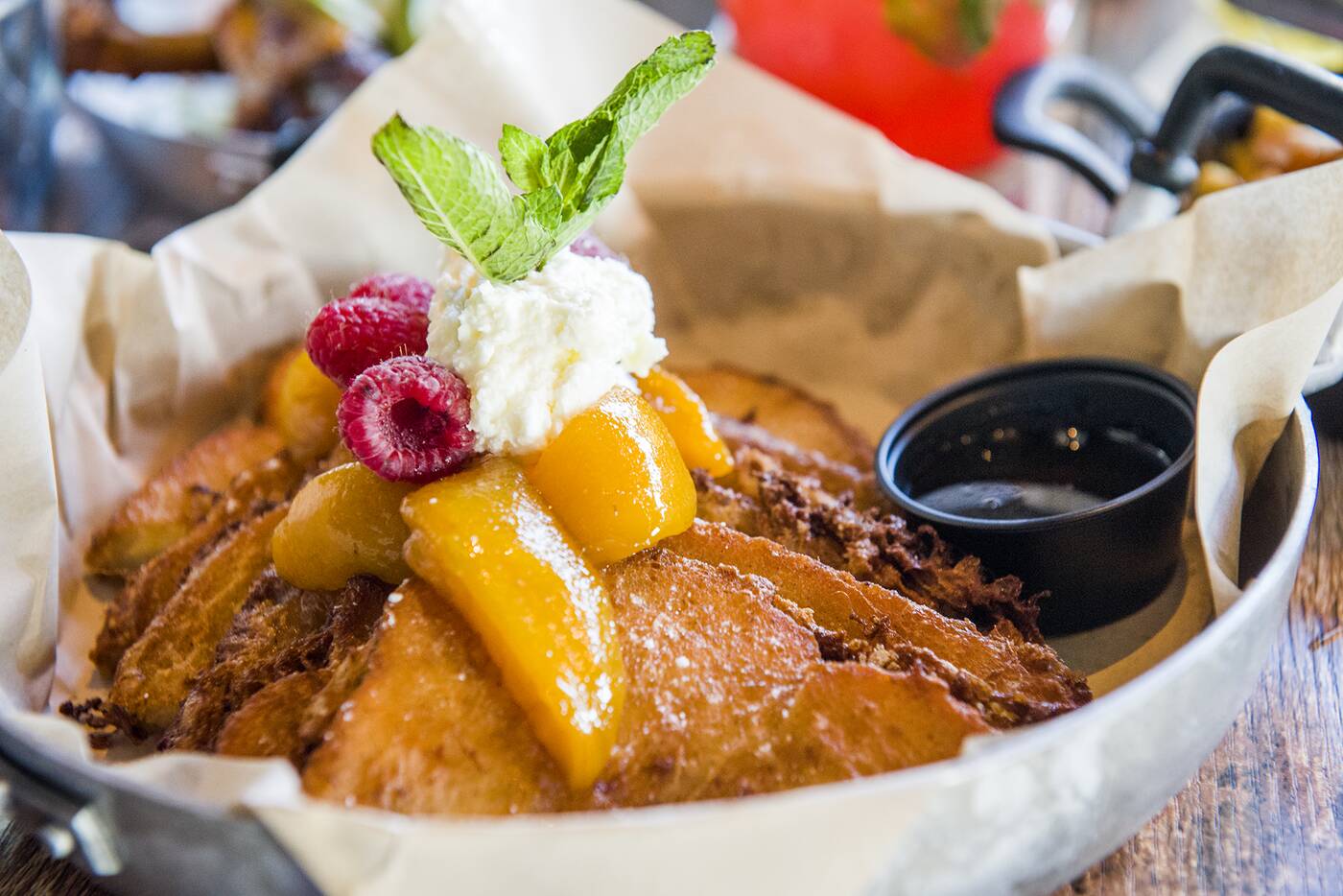 Peaches & Cream French Toast ($14) for brunch comes in an insane order of six slices with a praline crumble, a thick lemony whipped cream, peaches and a peach syrup made from caramelizing them. 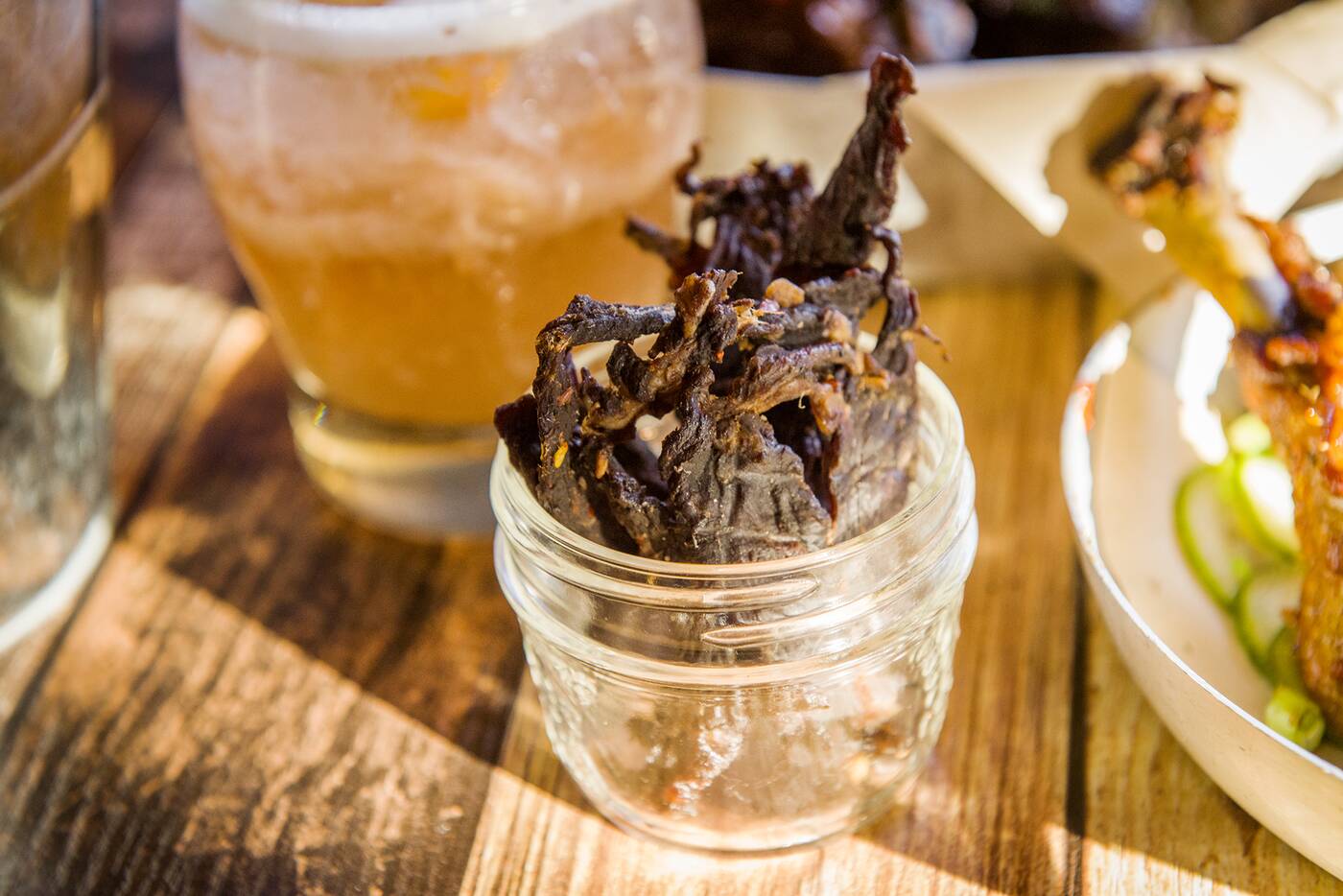 House beef jerky in flavours like a sweet heat hickory is available til 2, hopefully part of a late snack menu. Until then, the kitchen is still open until midnight. 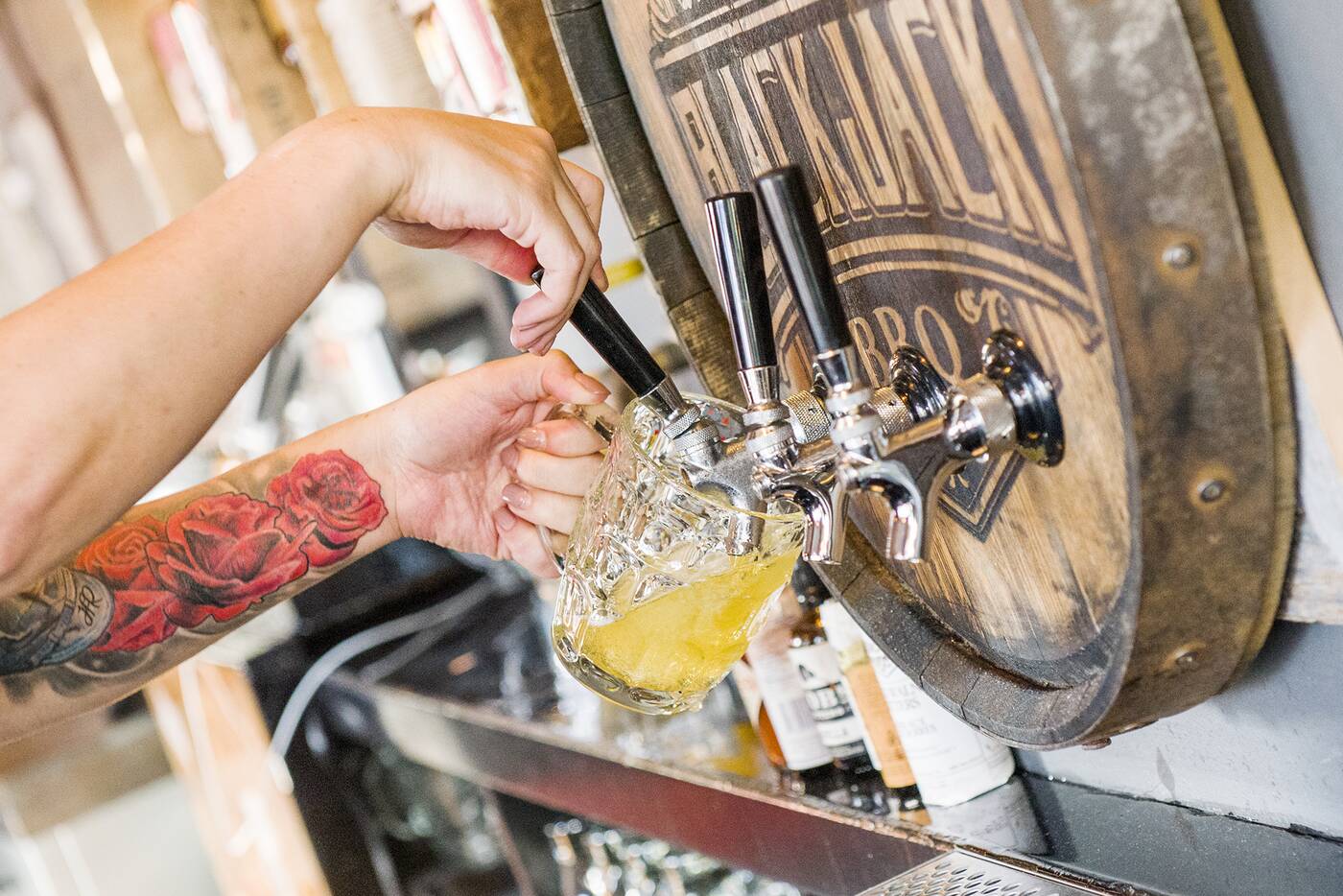 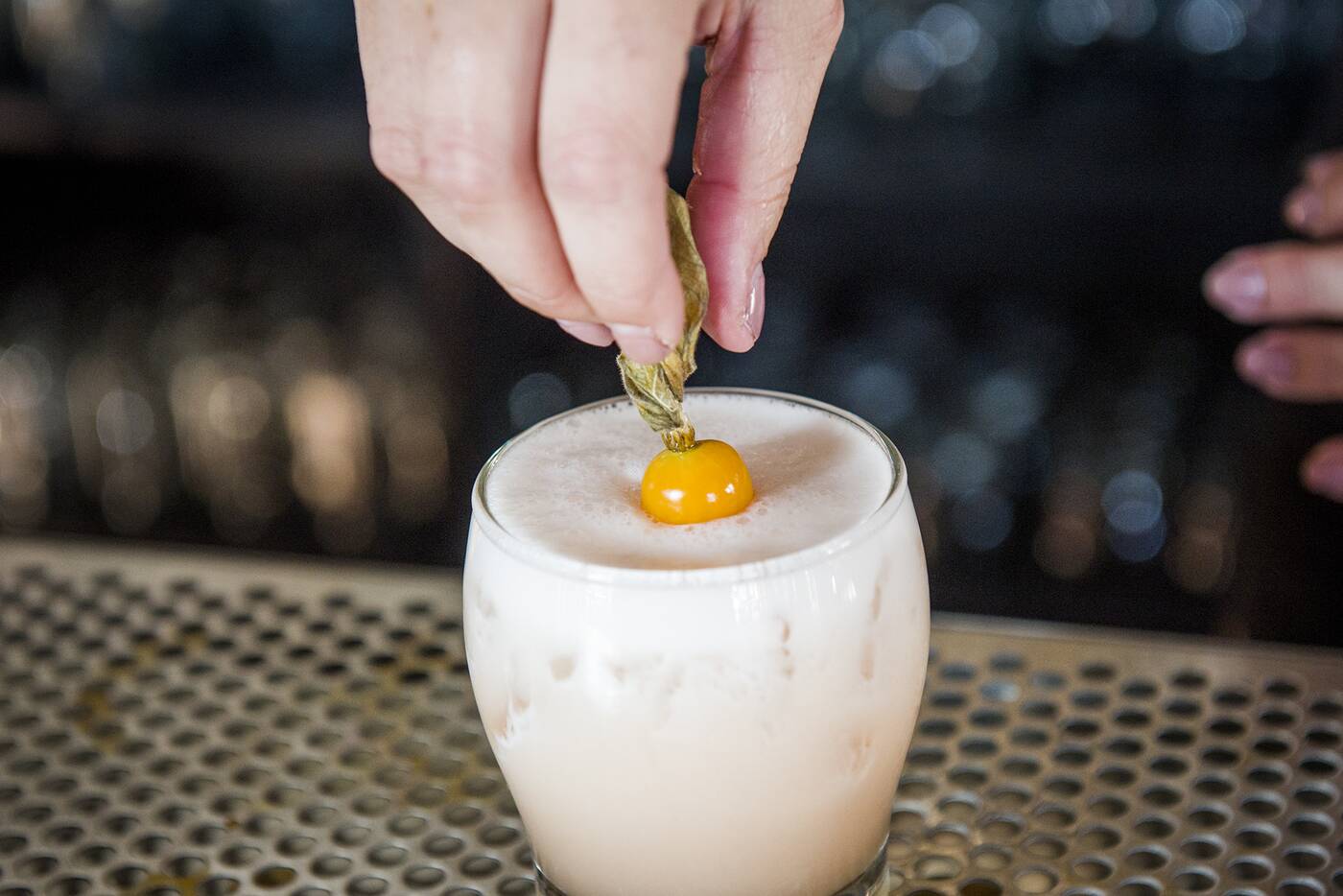 Shut the Huck Up ($14) is part of a bourbon-heavy cocktail menu, intended to make bourbon approachable with sweet acidity but not too much fruitiness. 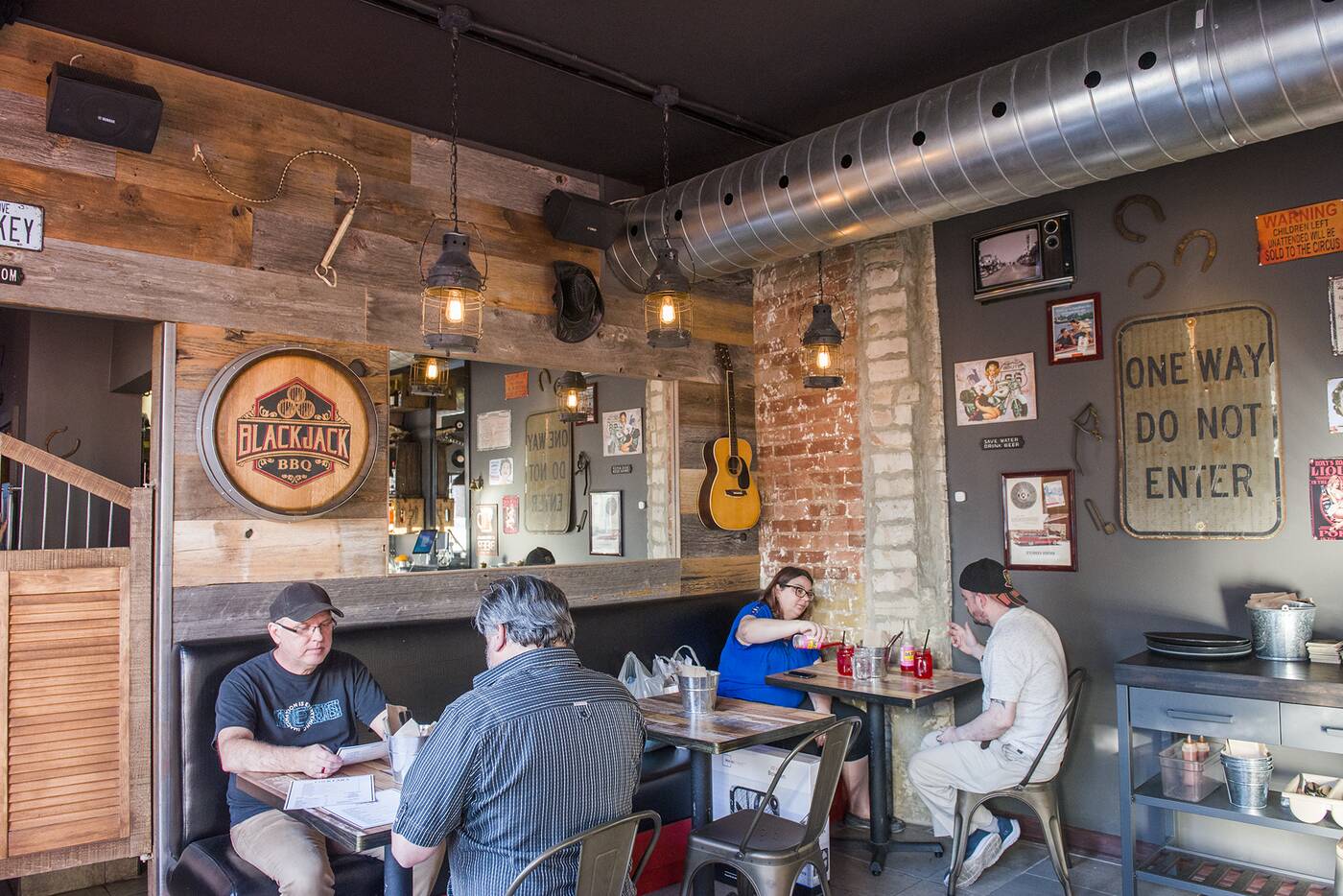 The interior is plastered with cheeky decor evocative of cowboys and saloons, all vintage cigarette ads and rusty stars. 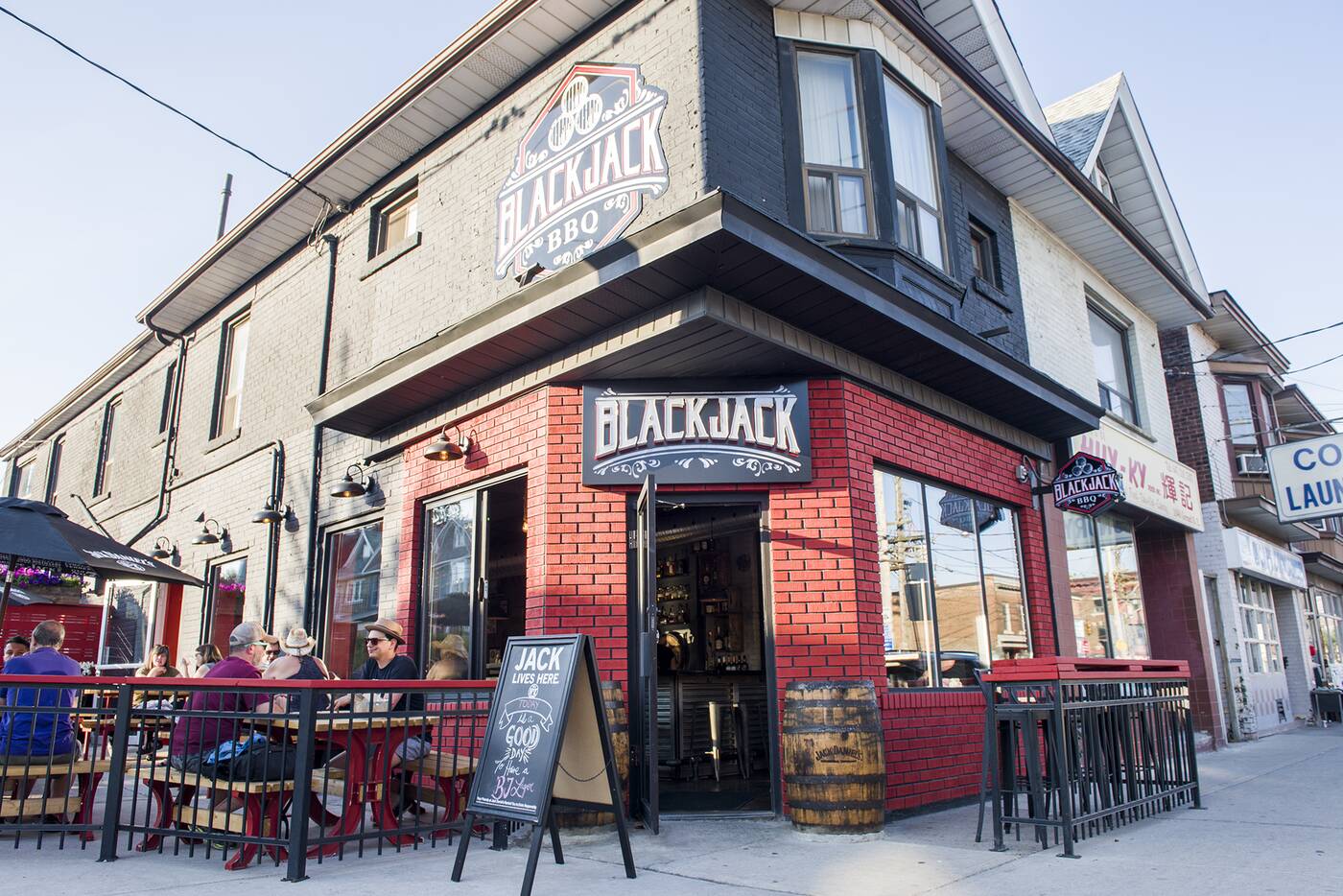