Parka Food Co. is a plant-based restaurant with a mission to make eating veggies fun. It’s a casual, unlicensed spot doing up veggie versions of burgers and mac n’ cheese.

This concept started out at the testing grounds of food festivals and Friday Nights at the ROM, spearheaded by Eric Chao. The name Parka basically just comes from what the word conjures, cozy parkas and the nature of parks. 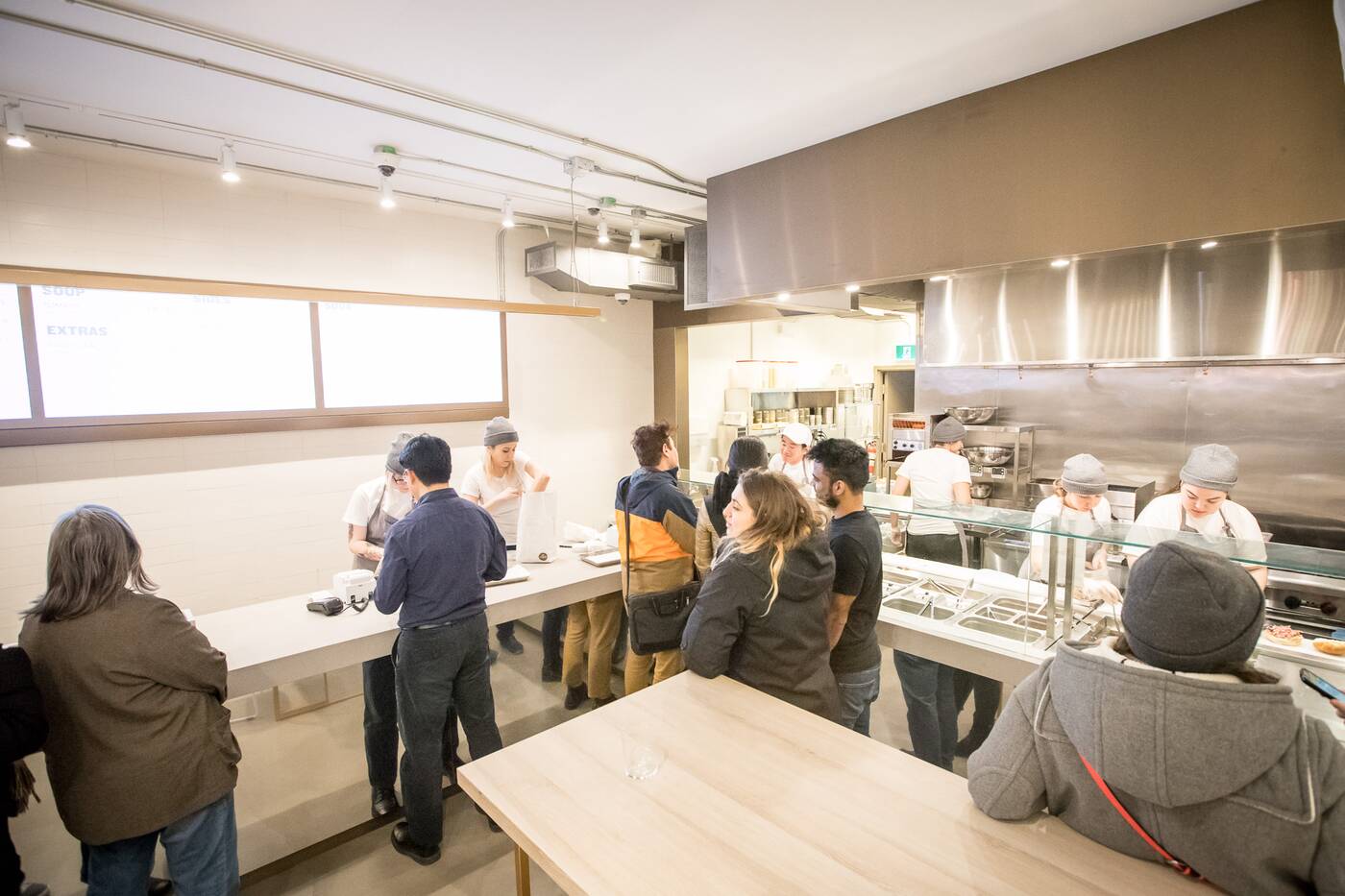 The space is minimal and open with an emphasis on transparency, most food prep done right out in the open at glassed-off counters. 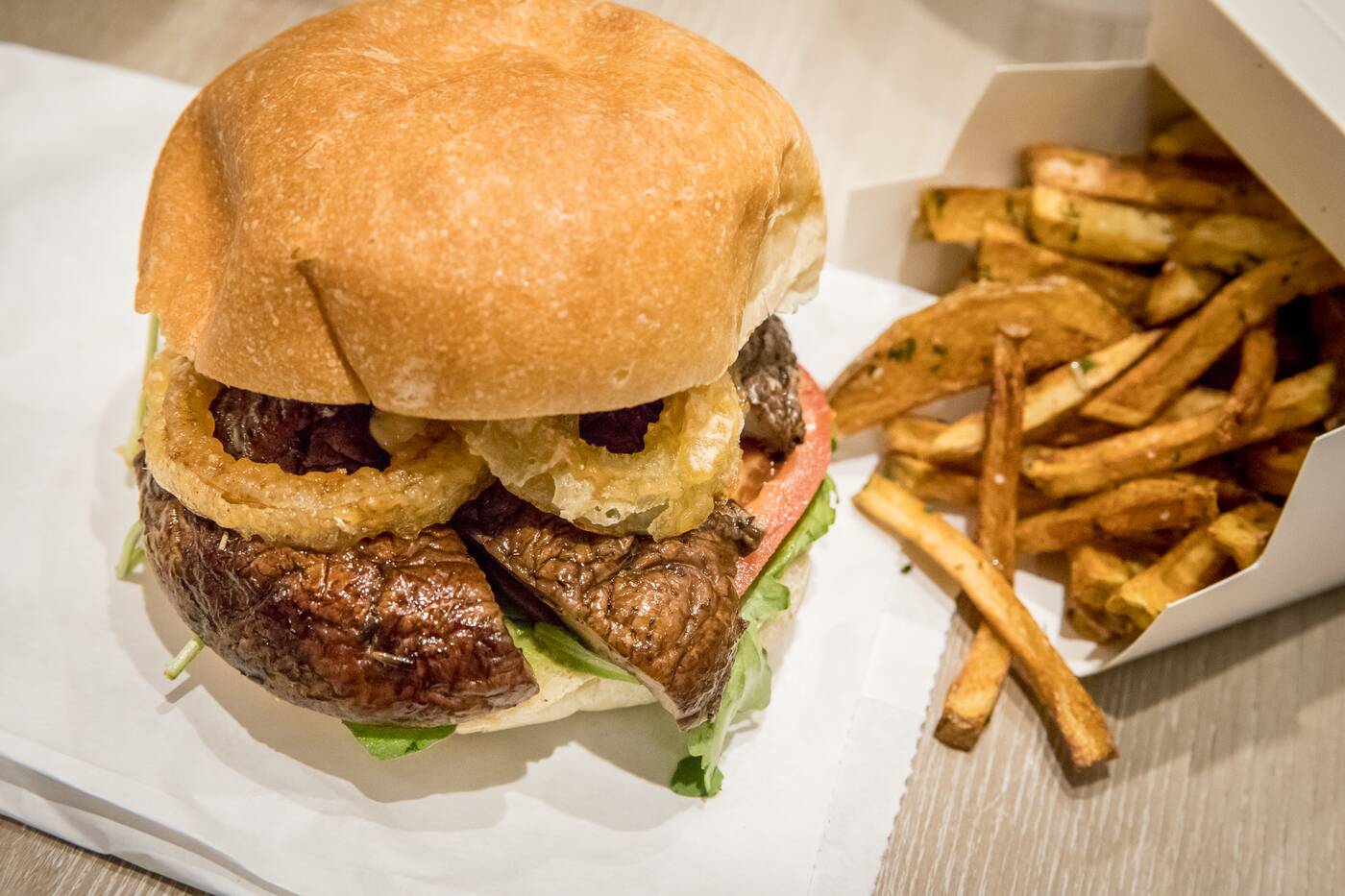 A portobello burger ($13.10) is surprisingly smokey, the flavourful marinade really coming through in the thick wedges of mushroom cap. Onion rings, chipotle aioli and guac add even more substance, texture and flavour. 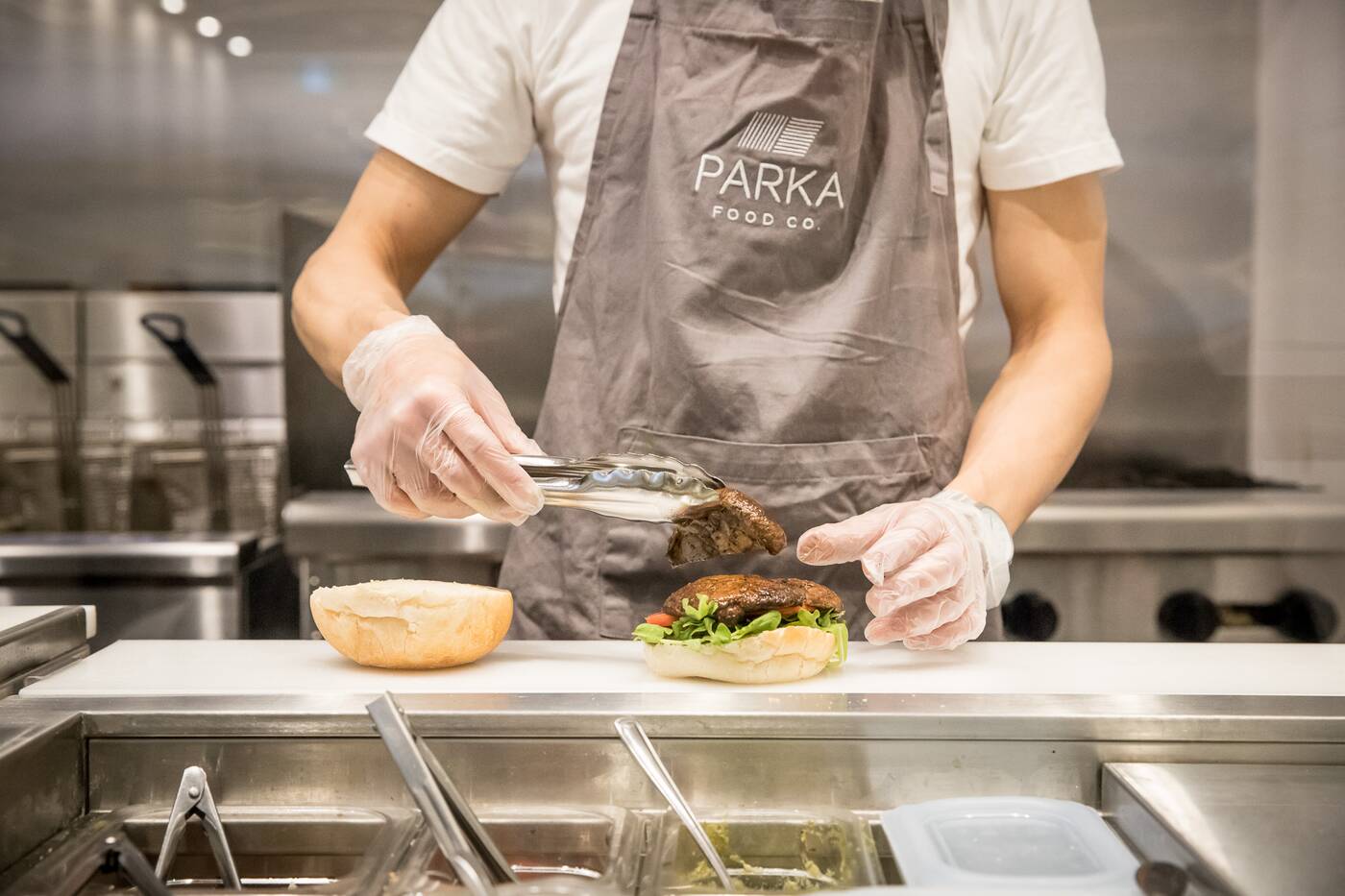 Chao won’t reveal where he found the bun, but does tell me he searched for a long time for one that would be dense enough to hold the ingredients well without being tough to chew. 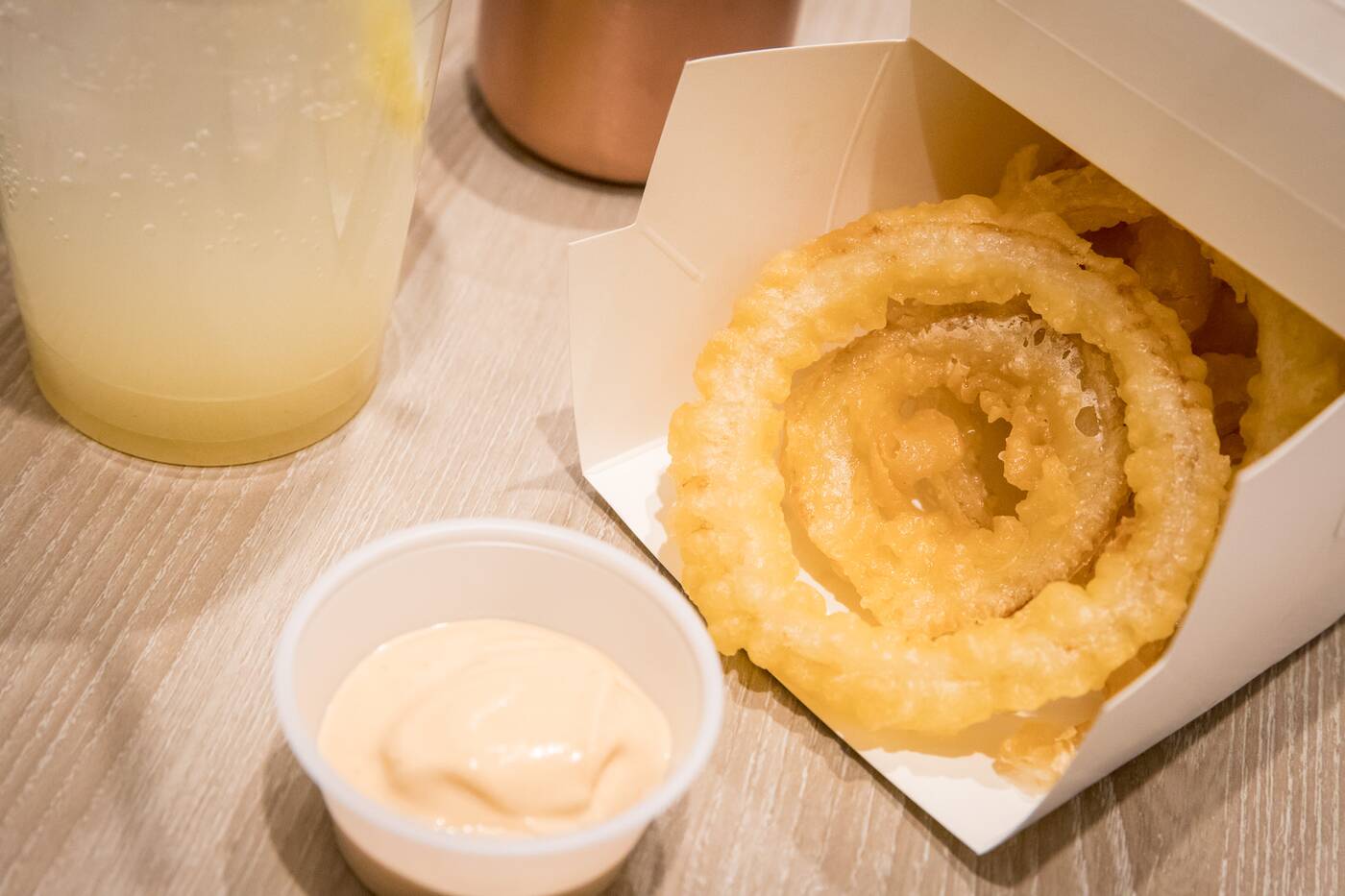 You can also order the onion rings on their own ($4.50). They’re battered very lightly which helps keep them nice and crunchy and ensures the flavour of the onion itself isn’t overpowered.

A potato burger ($11) is something different, crispy potato filets, tartar sauce, coleslaw and pickles reminding me a bit of some sort of fish or pork sandwich.

Though the delicate flavour of the potato could be seen as analogous to those meats, this veggie sandwich is really an invention all its own. 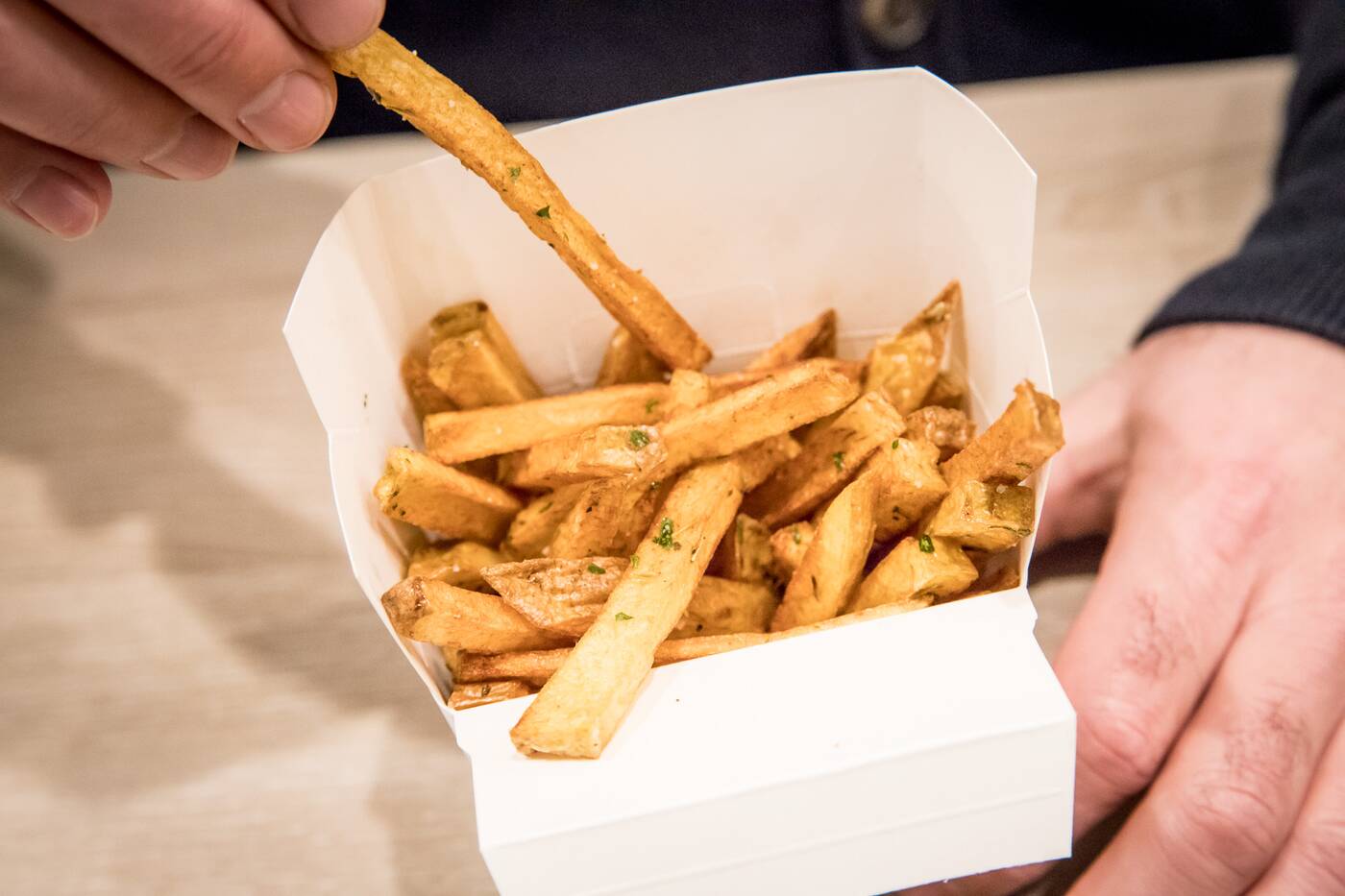 Fresh cut fries ($4) provide another obvious accompaniment to burgers, perhaps less crispy than the onion rings but I think I prefer the seasoning on these. 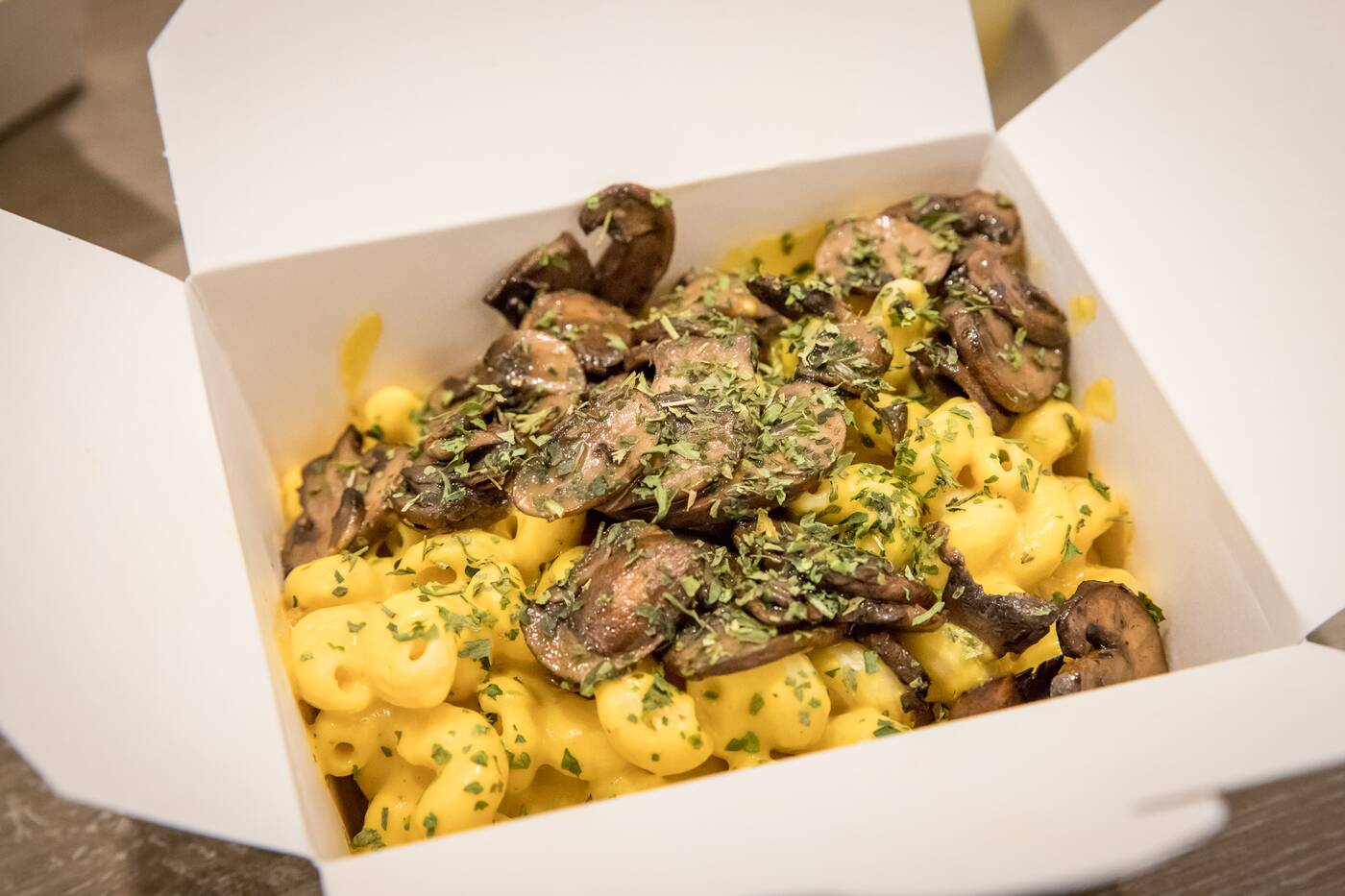 Truffle mushroom mac ($12.50), like all the macs, is dressed with a bright yellow cheese sauce made from veggies and nuts, but only this one is topped with sauteed mushrooms and rich truffle oil. There are also garlic onion and sundried tomato olive versions. 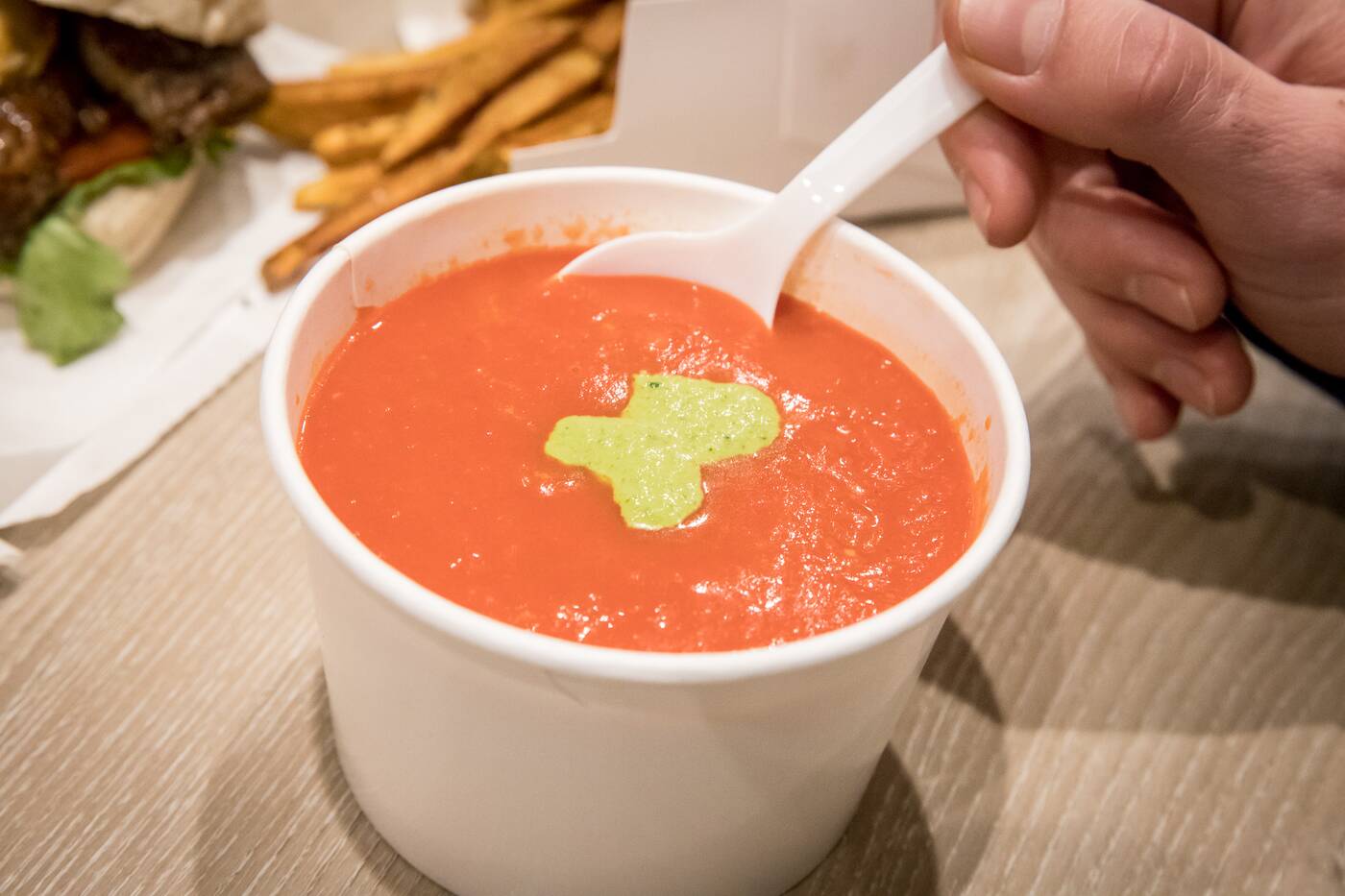 Tomato soup ($5.50 for the smaller size) is super comforting and simple, the only real accoutrement a dollop of fresh basil pesto that adds a pop of contrast to both the flavour and colour of the soup. 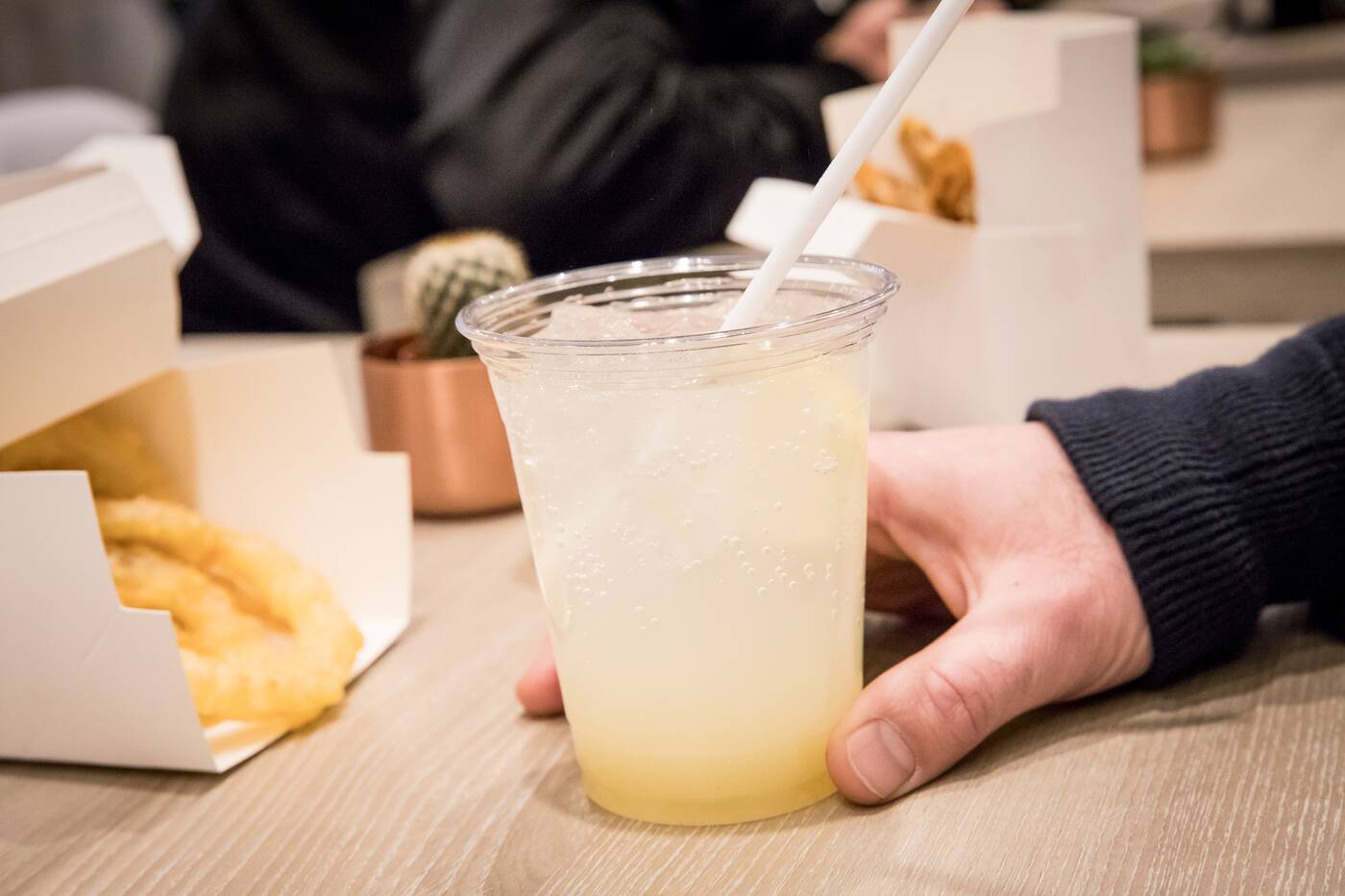 House ginger soda ($3) is made simply with a ginger and lemon concentrate to which soda water is added. They also do a red grapefruit version. 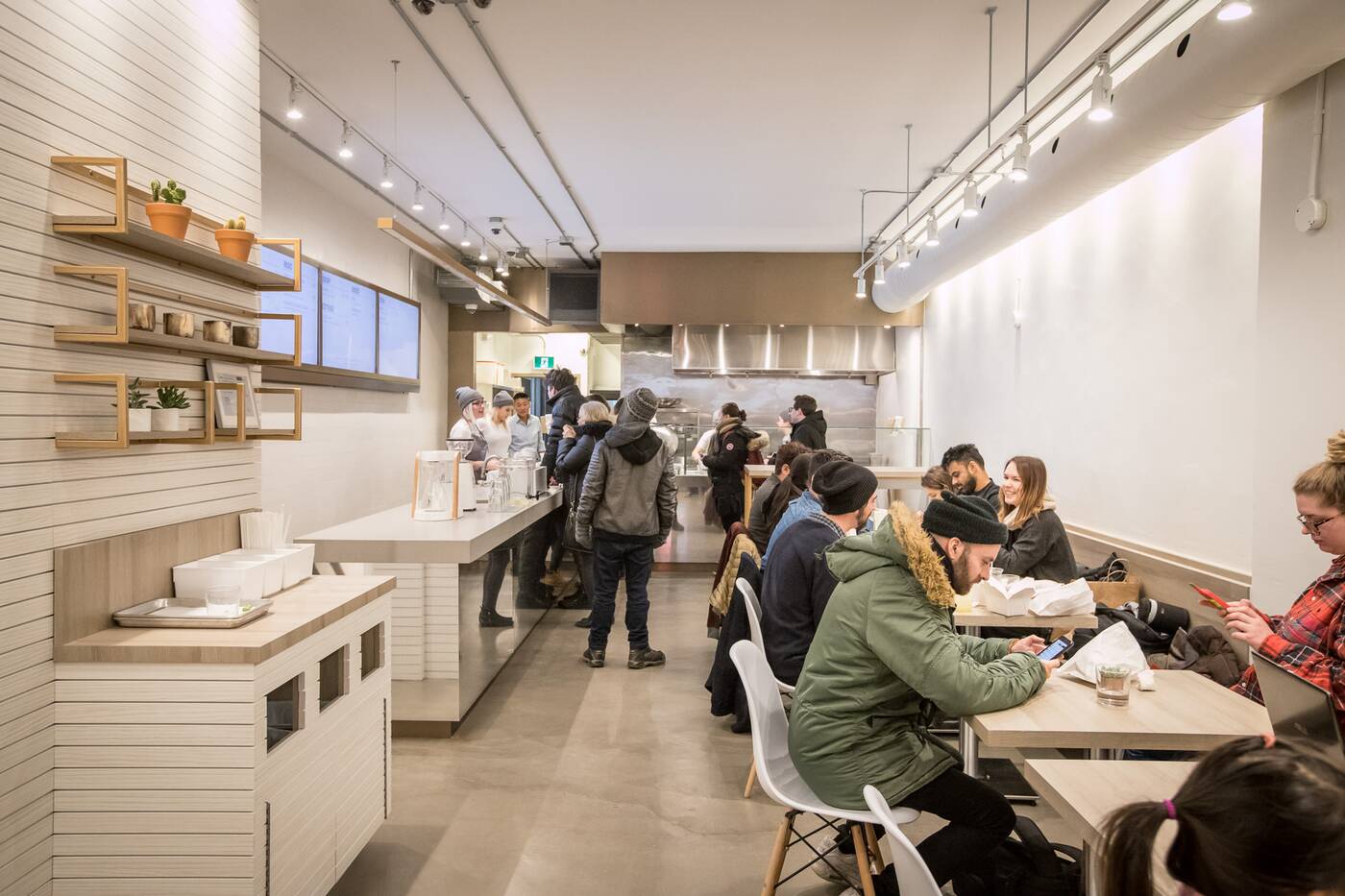 Watch out for additions to this minimal plant-based menu like fries supreme. 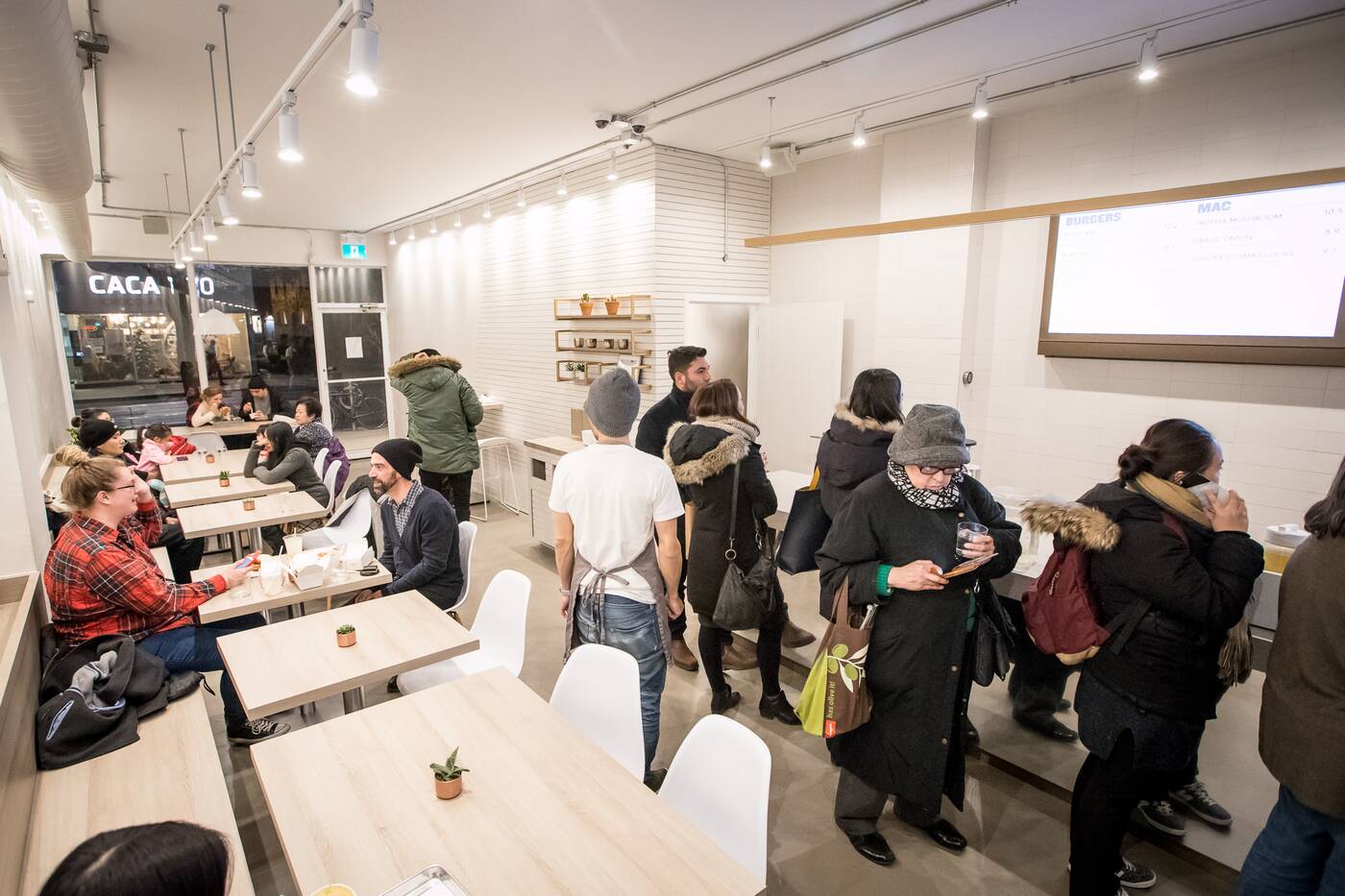 There are rumours of a secret menu that curious vegan foodies might just want to investigate further. 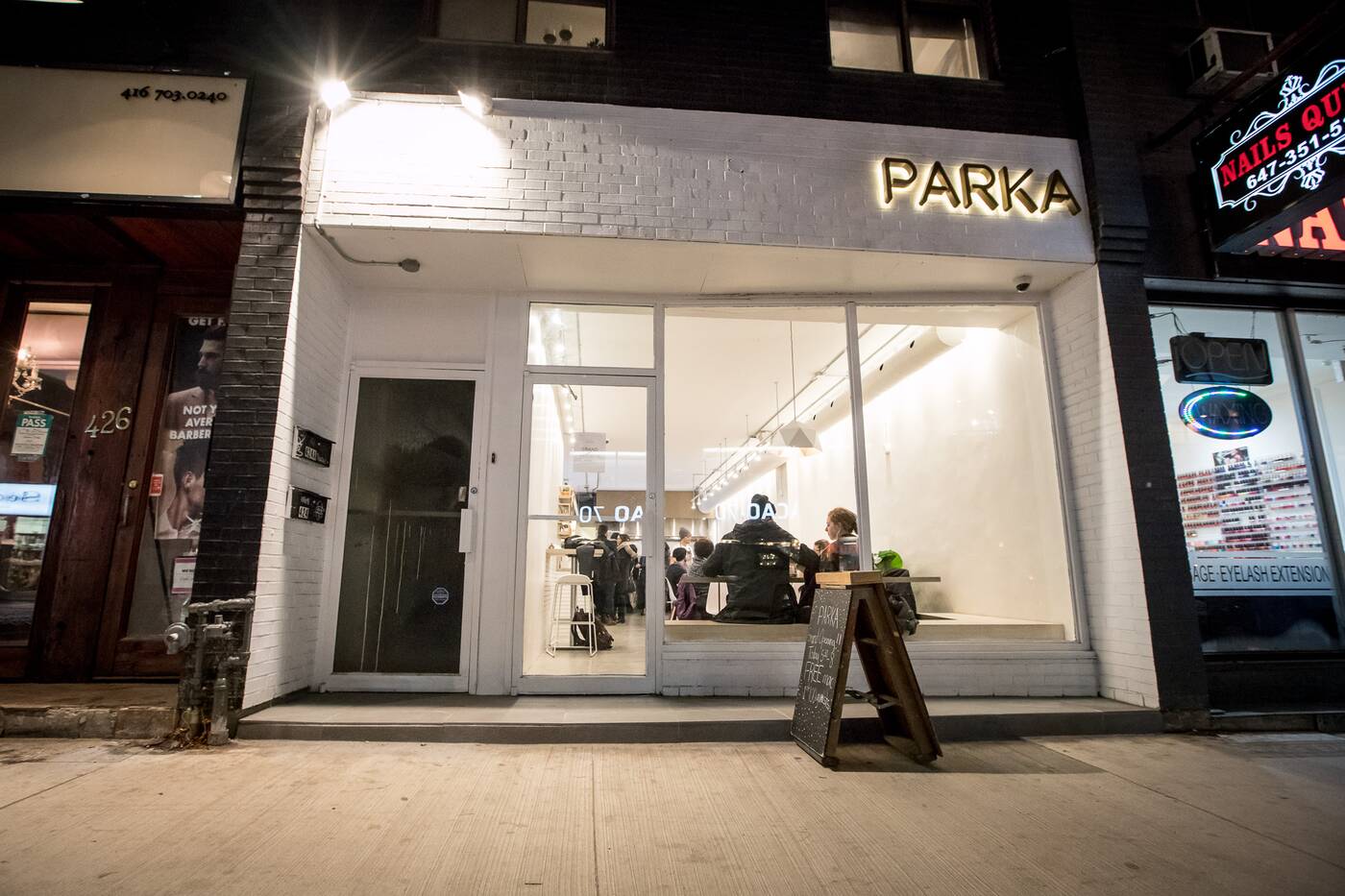