The top 42 pizza in Toronto by neighbourhood

Pizza joints in Toronto rarely fail to deliver a good slice, no matter where you are. Pop by any of these pizza pie shops for your favourite triangle-shaped food in the whole world.

Here are my picks for the top pizza in Toronto by neighbourhood.

Papa Ceo has been serving hungry and sleep-deprived U of T students with their massive slices, topped with generous portions of meat, cheese, and the occasional veggies for low prices.

Maker Pizza is not only one of the best pizza places in this area, it's one of the best in the city. They're known for their curly pepperoni cups, stretchy cheese pulls and sauce dollops.

For pizzas topped with some of the best pulled pork in the city, head to Conspiracy, the pizza spot located in the same place as its BBQ counterpart, Adamson Barbecue.

Three-day aged dough makes up the crusts at Village Pizza. Buy two of their artisanal slices and get a pop for free. 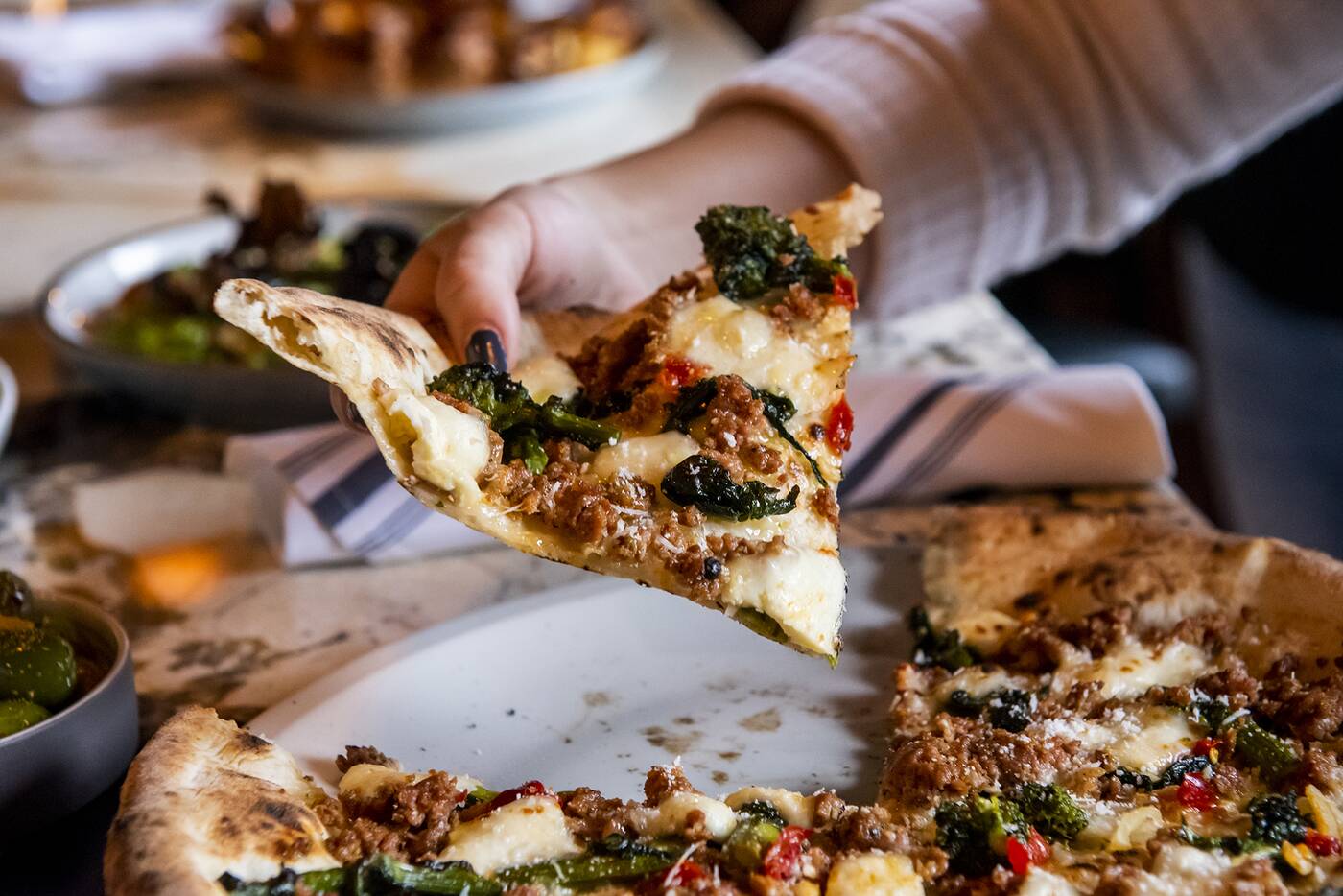 Gusto 501 is the place for pizza in Corktown. Photo by Hector Vasquez.

Pick your favourite pie out of nine signature options at Salt & Tobacco, where thin crust pizzas are served up in a beautifully designed, laid back shop.

Big Trouble is no typical pizza joint: their fluffy crusts are topped with innovative ingredients like jam, butter, chili jelly and truffle-infused ricotta.

Looking for pizza late at night in this bar-packed neighbourhood? Head to Express Pizza for greasy slices.

Carbonara and rapini sausage pizzas are on the menu at multi-level all-day restaurant Gusto 501 in this neighbourhood, along with antipasti, pasta, salads and lots of cocktails.

Though they're better known for their calzones, Frank's Pizza House does everything Italian well, and their pizzas are no exception. 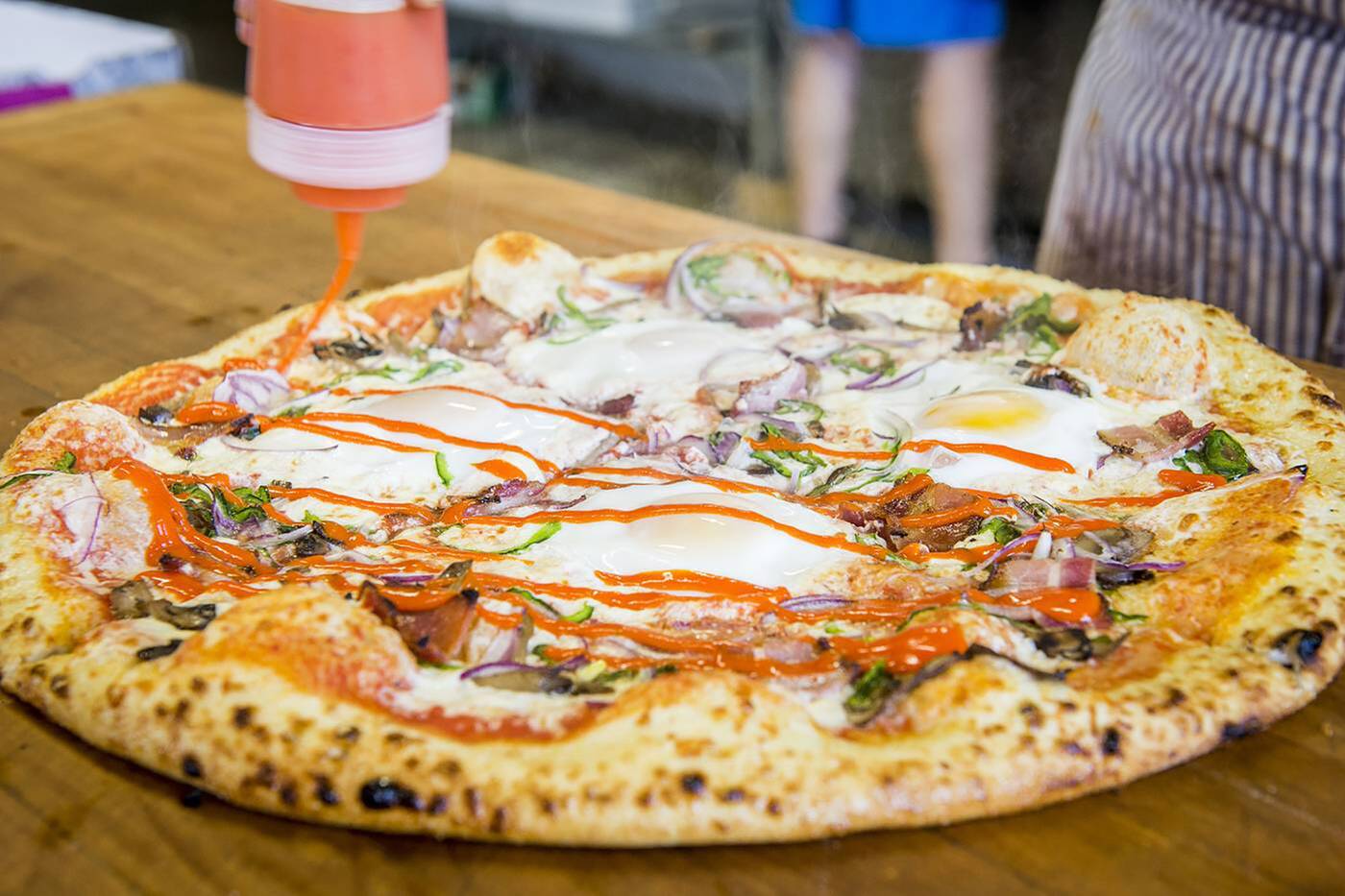 Longtime pizza spot Danforth Pizza House has been serving the area for over 50 years with whole pizzas baked only for takeout, with recipes that have been proudly passed down in the Manikas family.

Trecce is where to go for wood-fired pizza and wine in this neighbourhood, with lots of options for pies including Tuna, Putanesca, Meat Lovers, Quattro Formaggio and even Nutella.

Pizza and cocktails at Good Son located in a mall in this area is the perfect way to unwind during a long afternoon of shopping. There are also options like beef tartare and burgers on the menu.

The Fourth Man in the Fire does "American-style" pizzas that improve on the likes of Domino's, as well as Brooklyn squares and huge panzos.

One of the best pizzerias in the city, General Assembly is a spacious restaurant with two ovens from Naples that bake the pizza's dough  — which is made of both Canadian and Italian flour  — to perfection. 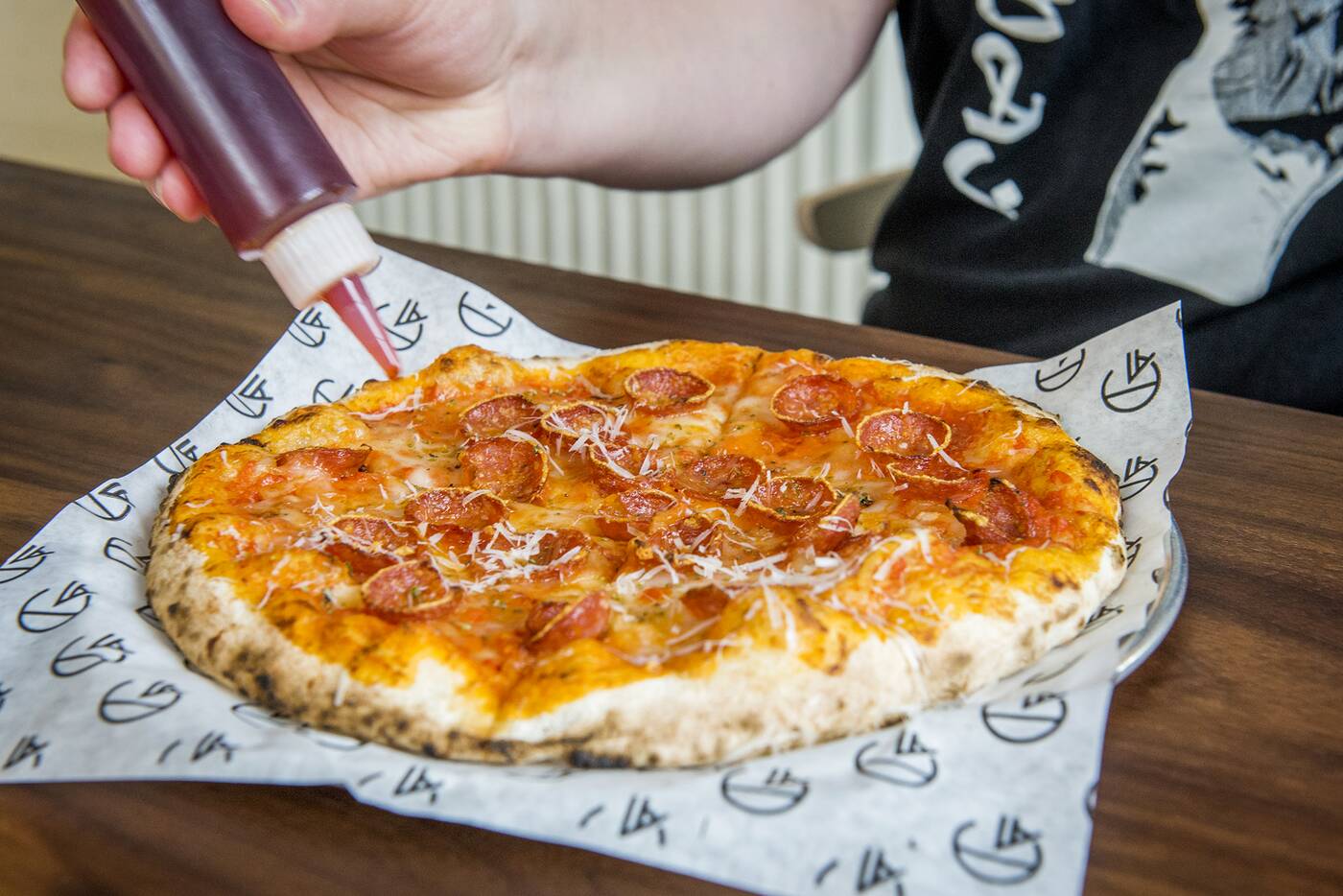 General Assembly is the places for personal sized pizza in the Entertainment District. Photo by Hector Vasquez.

Libretto is your source for quick-fired, thin-crust, personal Neapolitan pies with toppings that range from basic marinara to duck. They also do killer salads.

There's something about Pizza Gigi that keeps the locals and nearby U of T students coming back, despite the fact that it's been closed down before for slinging drugs — oh wait. That makes sense.

Pie Bar offers eats with a view of the lake, including thin-crust pizzas made in a wood-burning oven. Try The Godfather with double-smoked wild boar bacon and rosemary ham.

For gigantic, gooey slices that will definitely give you some serious post-pizza sleepies, head to King Slice. 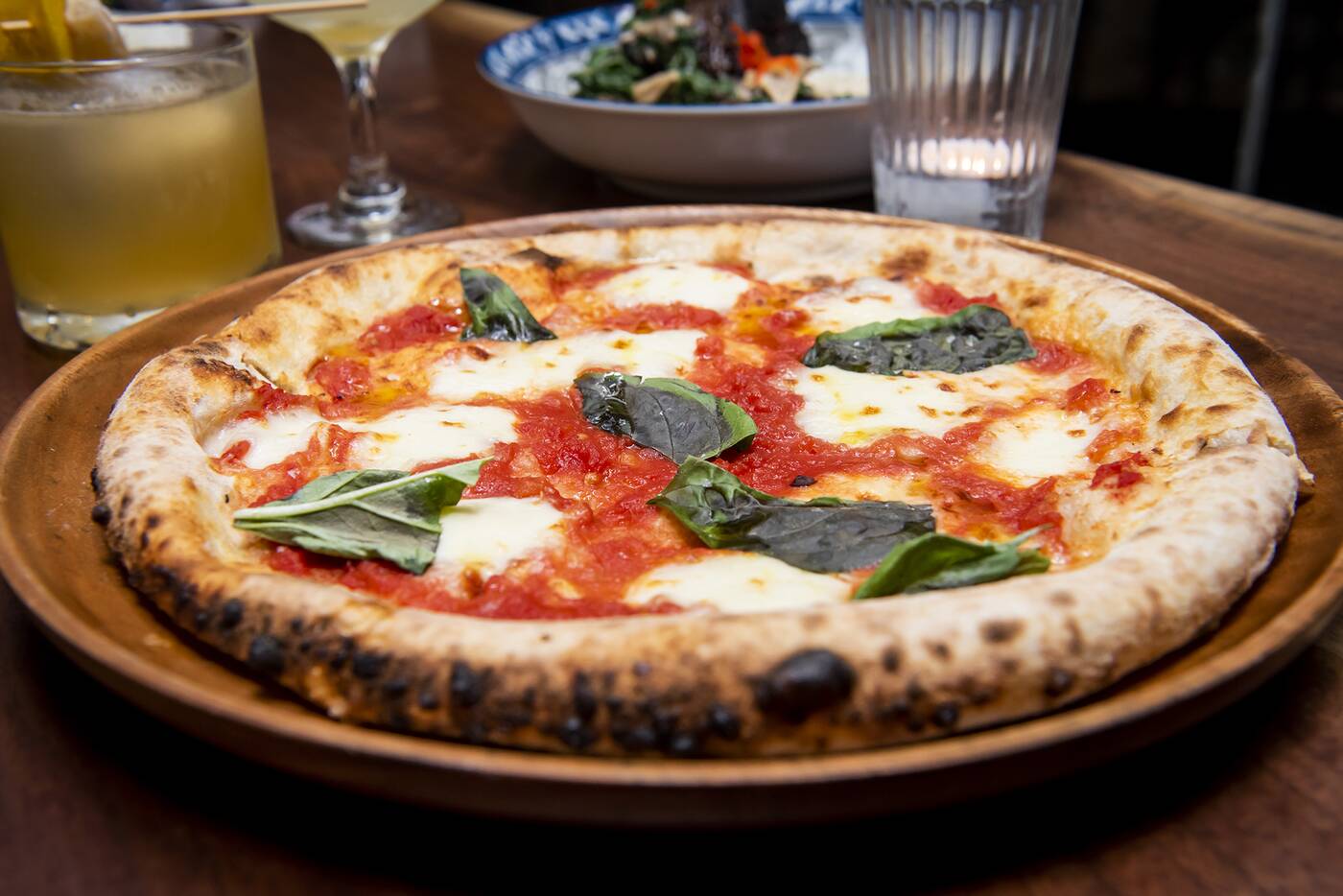 Try the sourdough pizza at Botham's. Photo by Hector Vasquez.

Sourdough pizza is cooked in a blazing wood fire oven at Botham's. Marinara and Margherita pizzas are always available, but there's usually a market price special too.

Get your pizza crusts at Defina Woodfired in four types: Napoletana, Roma, Kamut or gluten-free, and enjoy some delicious slices covered in luxuriously tasty toppings like pork shoulder sausage.

Via Mercanti is a great option out of several in the market for pizza. The style here is Neapolitan, and they've been doing it right for many years.

Cafe Oro di Napoli serves wood-fired Neapolitan pies in this neighbourhood. Add on a few of their delicious pastas to your order too. 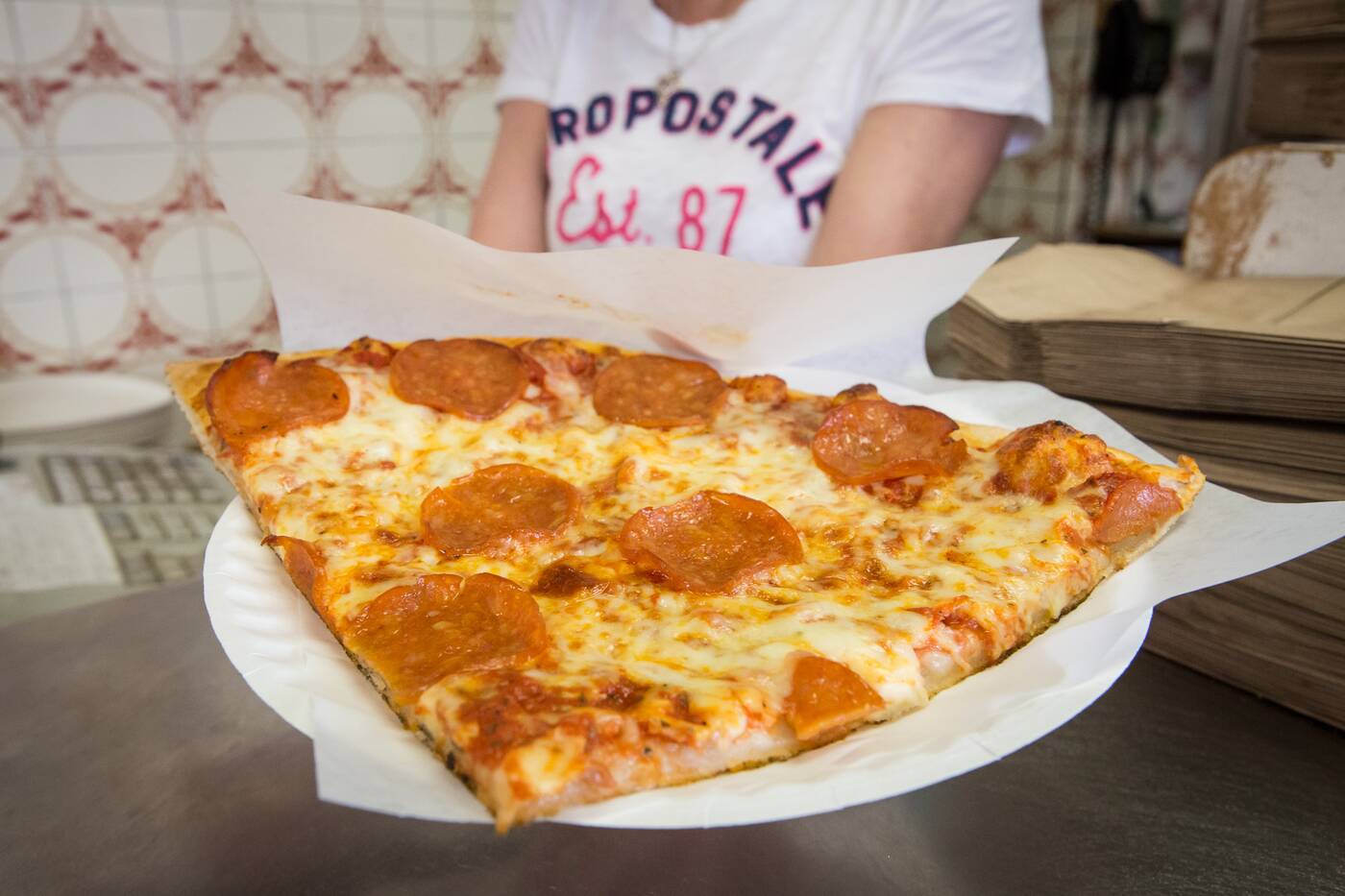 Bitondo's makes giant slices in Little Italy but you can also get whole pizzas here too. Photo by Jesse Milns.

As the first Detroit-style pizzeria in the city, the pies at Descendant Pizza are all thick, gooey slices of rich pizza, cut into squares and big enough to feed a family of four (or just one really hungry person).

An aging Italian joint on Clinton, the interior at Bitondo's has definitely seen better days, but it's still a great option for loyalists who love the place's big slices of ready-made pizzas, sandwiches and panzos.

Piano Piano has a location in this neighbourhood that serves their legendary pies with toppings like spicy soppressata, fior di latte, fingerling potatoes and Sicilian anchovy.

Chito's is where to get pizzas topped with shawarma and liberal amounts of hot sauce and garlic sauce. They serve other items too, but that's what they're known for.

Oakwood Pizzeria is this neighbourhood's humble but reliable spot that's been serving old school pizzas since 1974.

Superpoint is the ultimate late night pizza hangout in this neighbourhood, selling whole pies as well as pasta and wine. 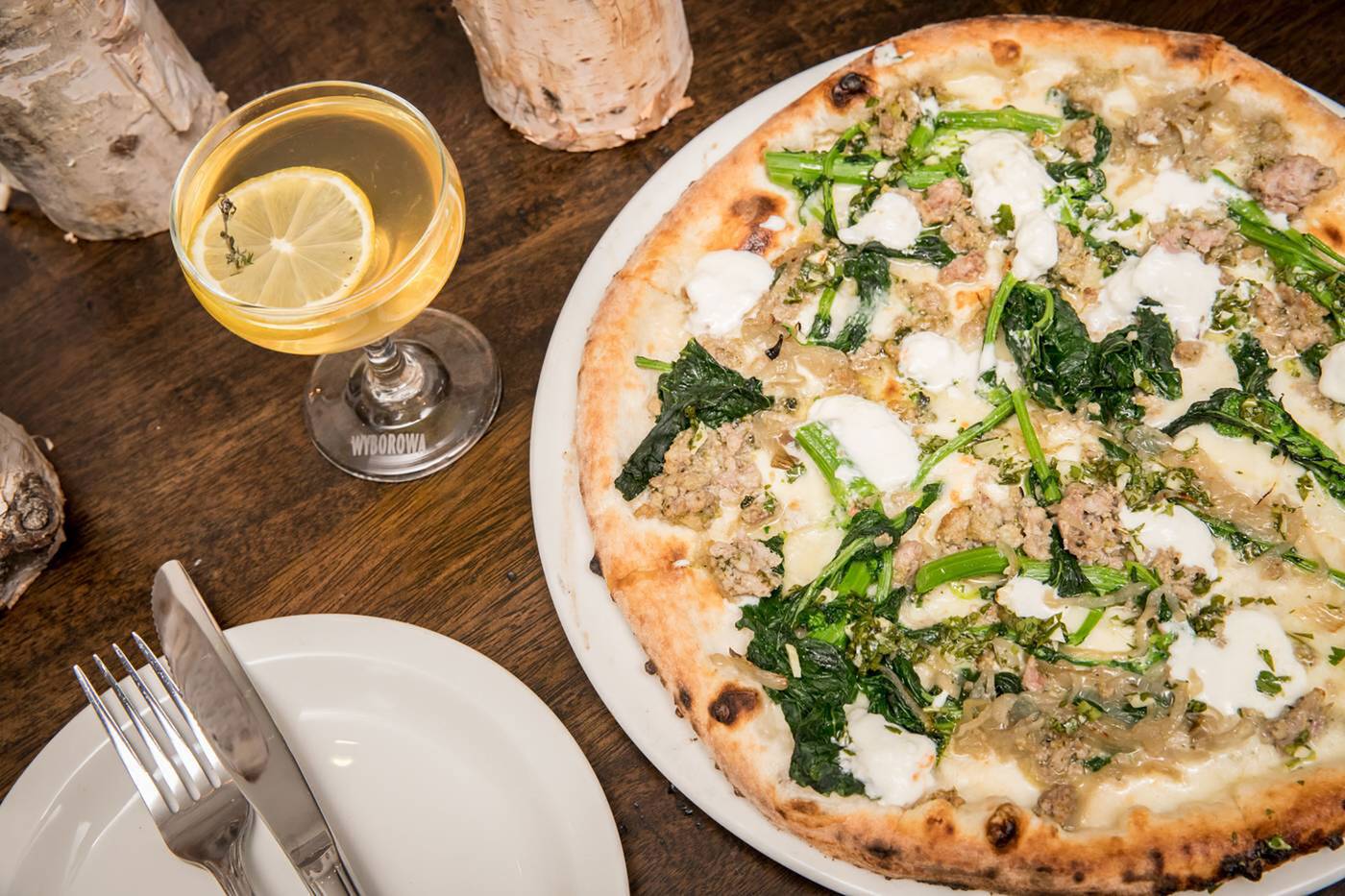 Defina Woodfired in the Junction Triangle is where to get handmade wood-fired pizzas. Photo by Jesse Milns

Vegan pizza is taken to another level at Pizzeria Du, a spot from the people behind Avelo where pies are totally plant-based but never boring.

Head to the "pizza garden" at the location of North of Brooklyn in this neighbourhood, where you can get a simple NY Cheese pie, a Margherita or their Killer Bee invention with honey.

Lambretta is a date-night getaway and weekend hub for families who love the sight of the restaurant's gas-powered stone oven — a contraption that bakes the mouthwatering Roman-style pizzas the place is known for. 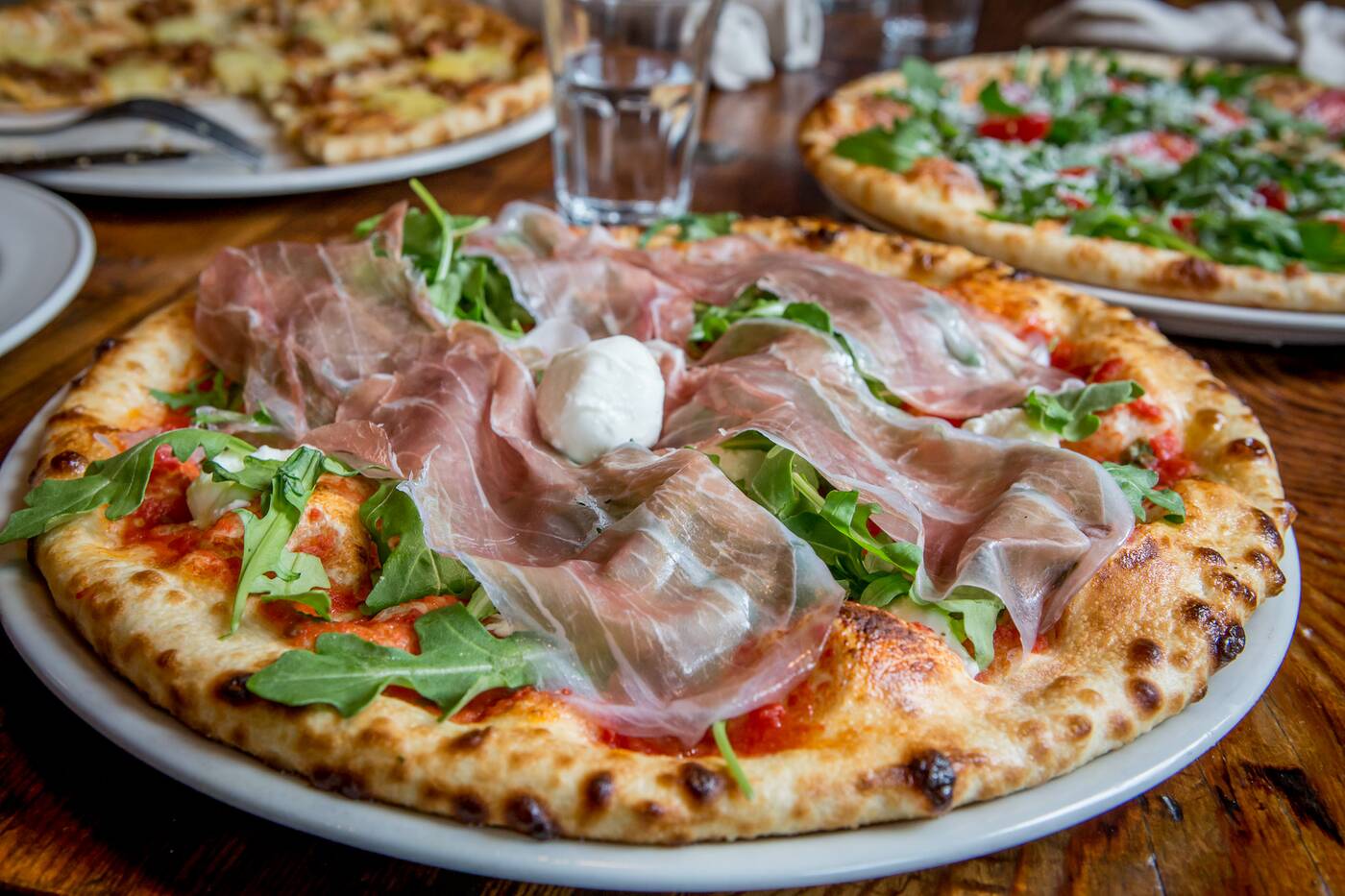 Terroni has multiple locations in the city but the Rosedale one comes with the best people watching. Photo by Jesse Milns.

Terroni has a location in this neighbourhood where you can dig into one of their popular whole personal pies with a fork and knife. Sharing is definitely optional.

Mark's Pizzas might be the city's most exclusive pie place, slinging thin-crust pizzas only on certain days of the week. The menu is always changing with the seasons, and you have to order by text.

Taverna Mercatto is where you want to go when you're craving a fancy prosciutto pizza. They also have options like mushroom, pepperoni and Margherita.

Dante's Inferno turns out a great panini, but they also do awesome pizzas with options like mushrooms or Calabrese sausage for toppings. 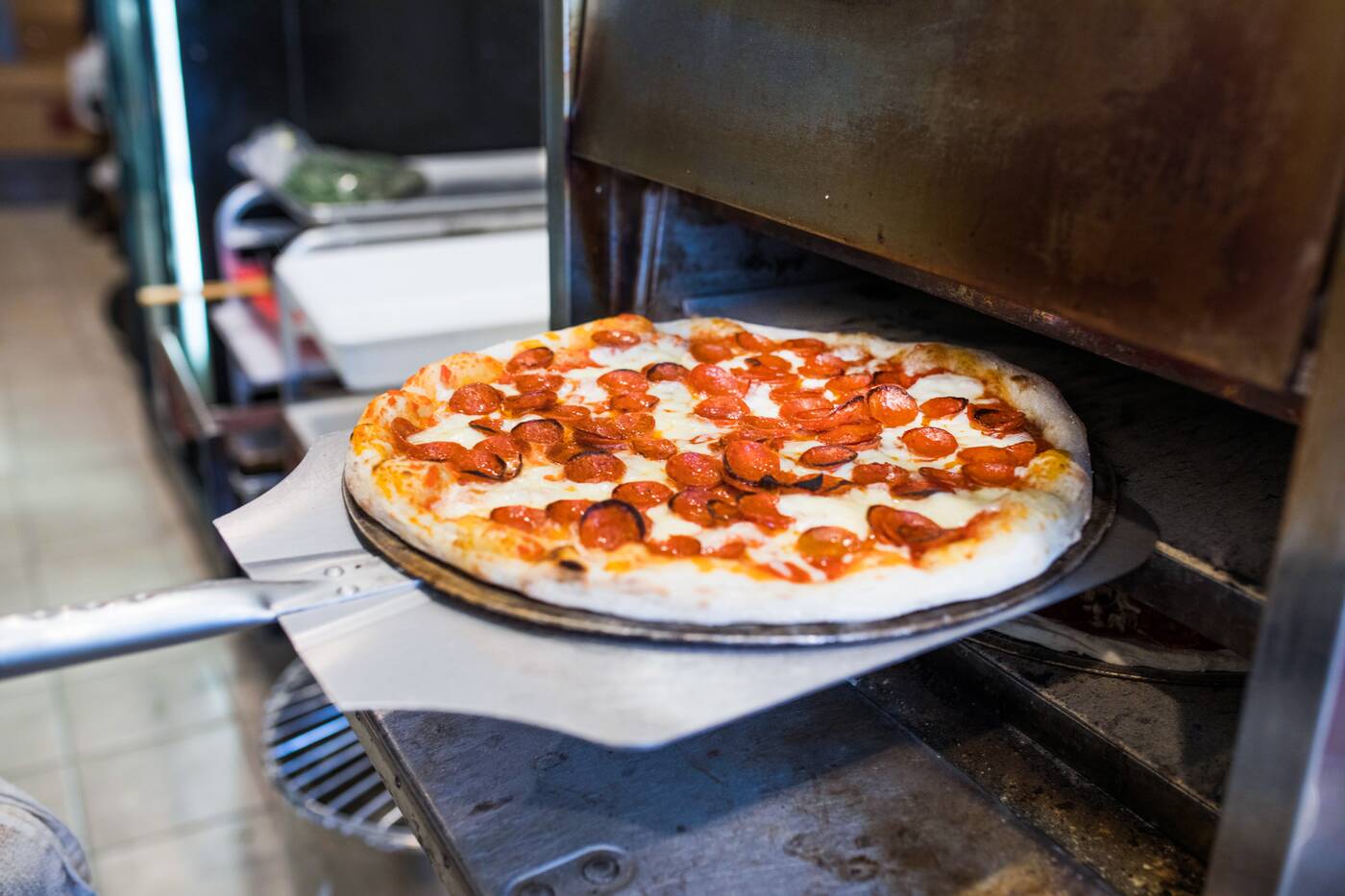 Mark's Pizza is a Scarborough gem. Photo by Hector Vasquez.

Multiple types of pizza are available at Eataly, a massive grocery store that also contains several restaurants. Round, square, for dine-in or take home, they've got it all.

Pizza Shab is home to loaded halal pizzas as well as "rolling pizzas" and "snack sandwiches" drizzled with sauces.

A neighbourhood institution, Classico Louie's definitely isn't your upscale pizza spot but it serves the basics and does it well. All their dough is made with a durum semolina crust and rolled in cornmeal, giving their pies a distinctly unique flavour.

Blondies sells pizzas with fun names in pink polka-dotted boxes, so they're worth ordering from for the aesthetic value alone. Don't miss their dipping sauces and salads.

Hector Vasquez at North of Brooklyn

The most famous hidden bar in Toronto is permanently closing

One of the most romantic bars in Toronto has permanently closed