King Slice has been a staple for gourmet pizza and pasta since the late 80's in the High Park area.

They've since expanded to a second location near Queen and Dovercourt, both restaurants are being ran by a brother and sister duo who've been passed on the family business from their father who started the company.

Tin Nguyen came to Canada in the sixties as a refugee from the Vietnam War, years after immigrating he went on to work as a cook at Sneaky Dee's and then a pizza maker at Massimo's. 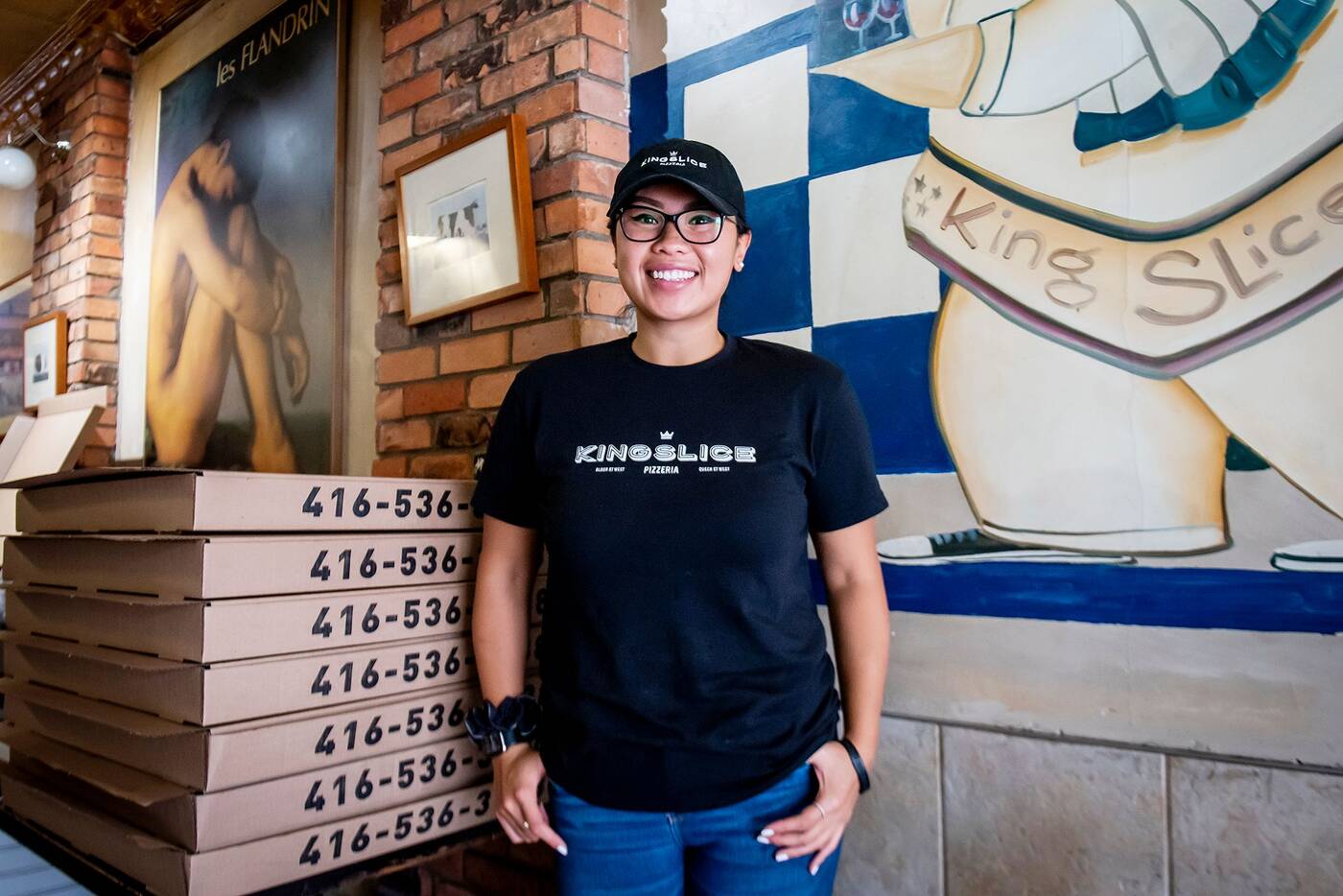 Nguyen took his tips and tricks for making Italian food to open up King Slice's store on Bloor in 1989, just one year before his daughter named Cathie Vo was born. 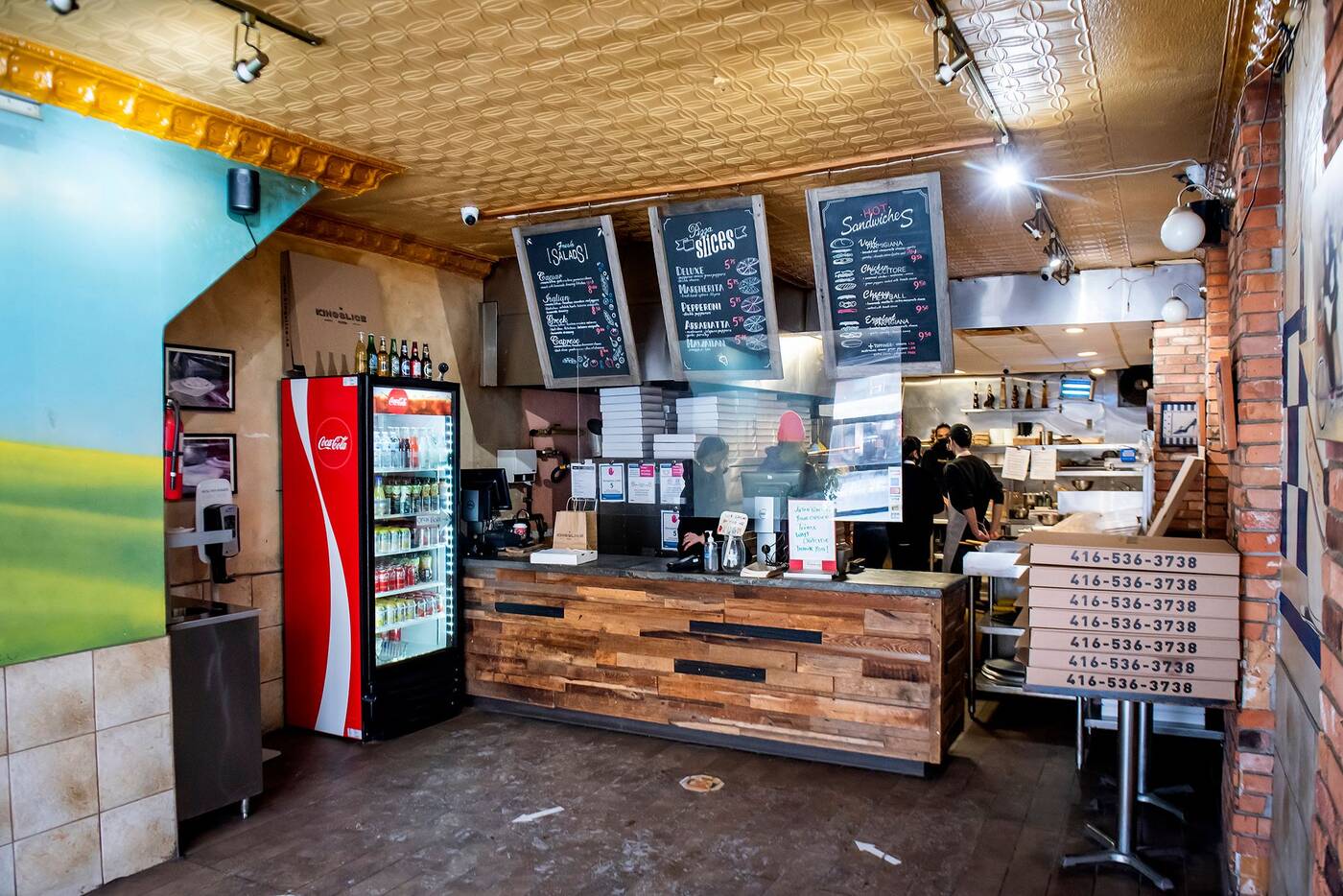 Vo says her parents didn't have babysitters growing up, so she was always at the pizza restaurant, washing dishes and helping to cut fresh toppings as young as four years old. 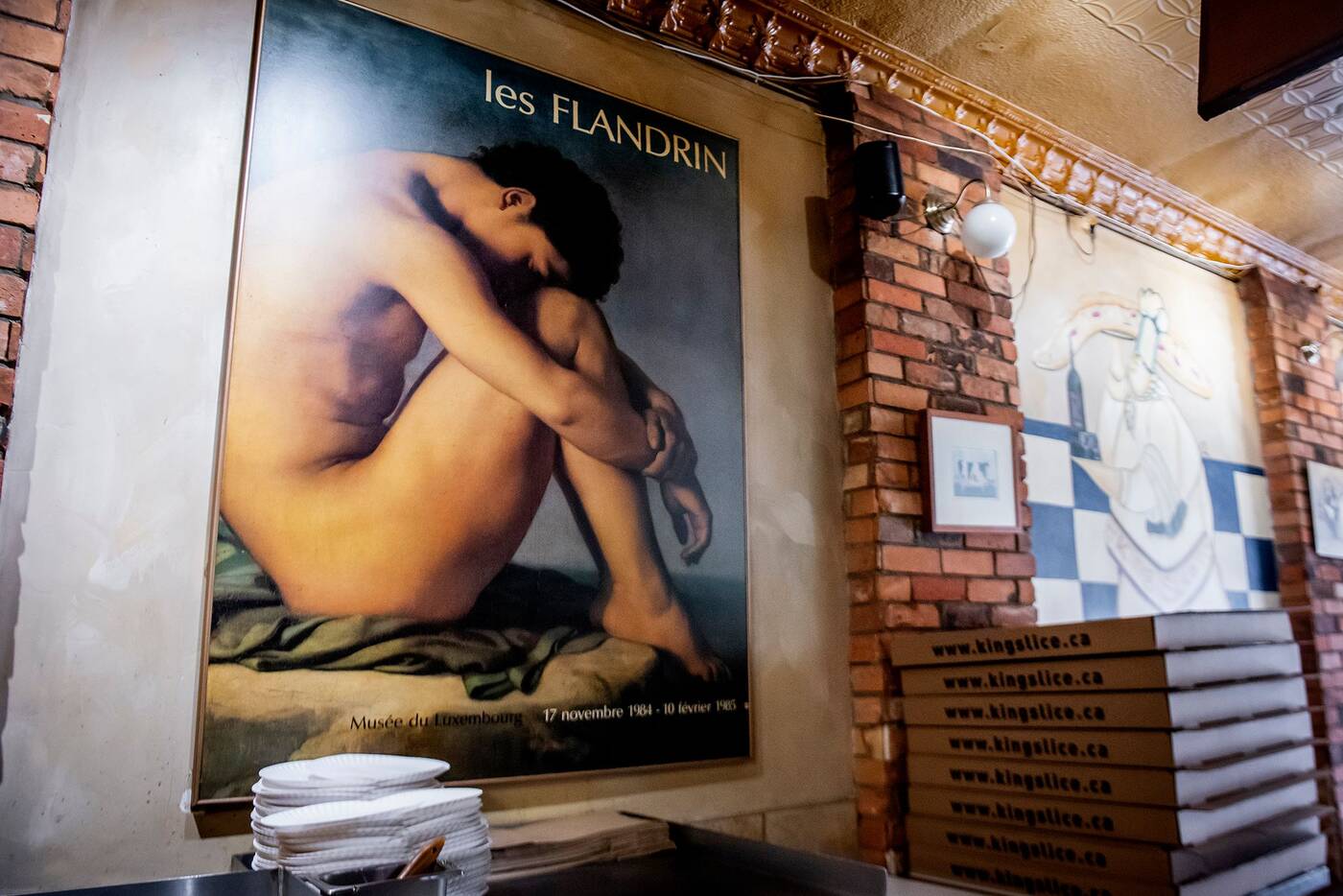 The inside of the store still holds memories of the last several decades, a painting of a Renaissance man sitting down has been hung since the store first opened. 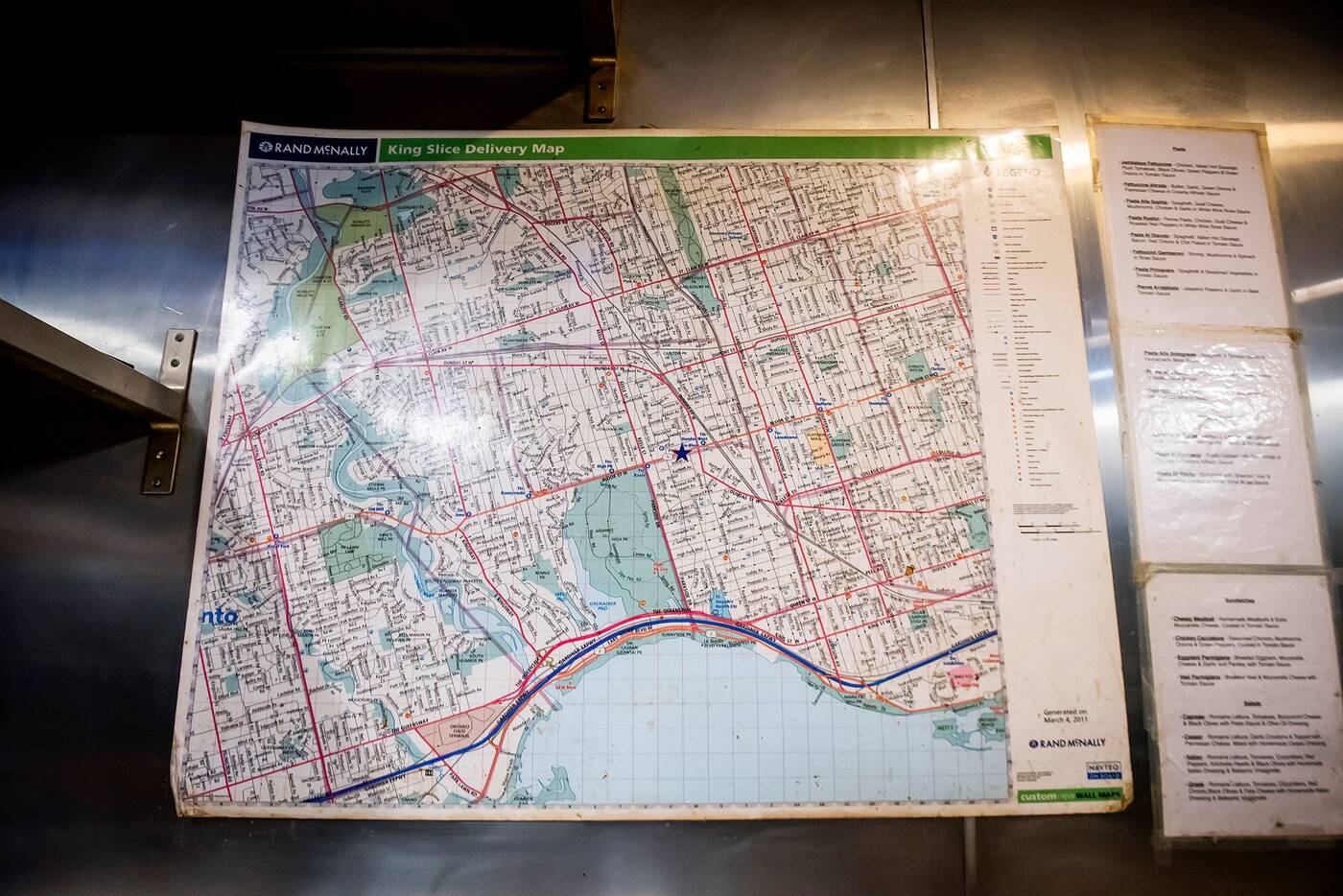 An old map is plastered on the back wall of the kitchen, it was used by delivery drivers to track where they'd be travelling to, of course this was from the pre-smartphone era. 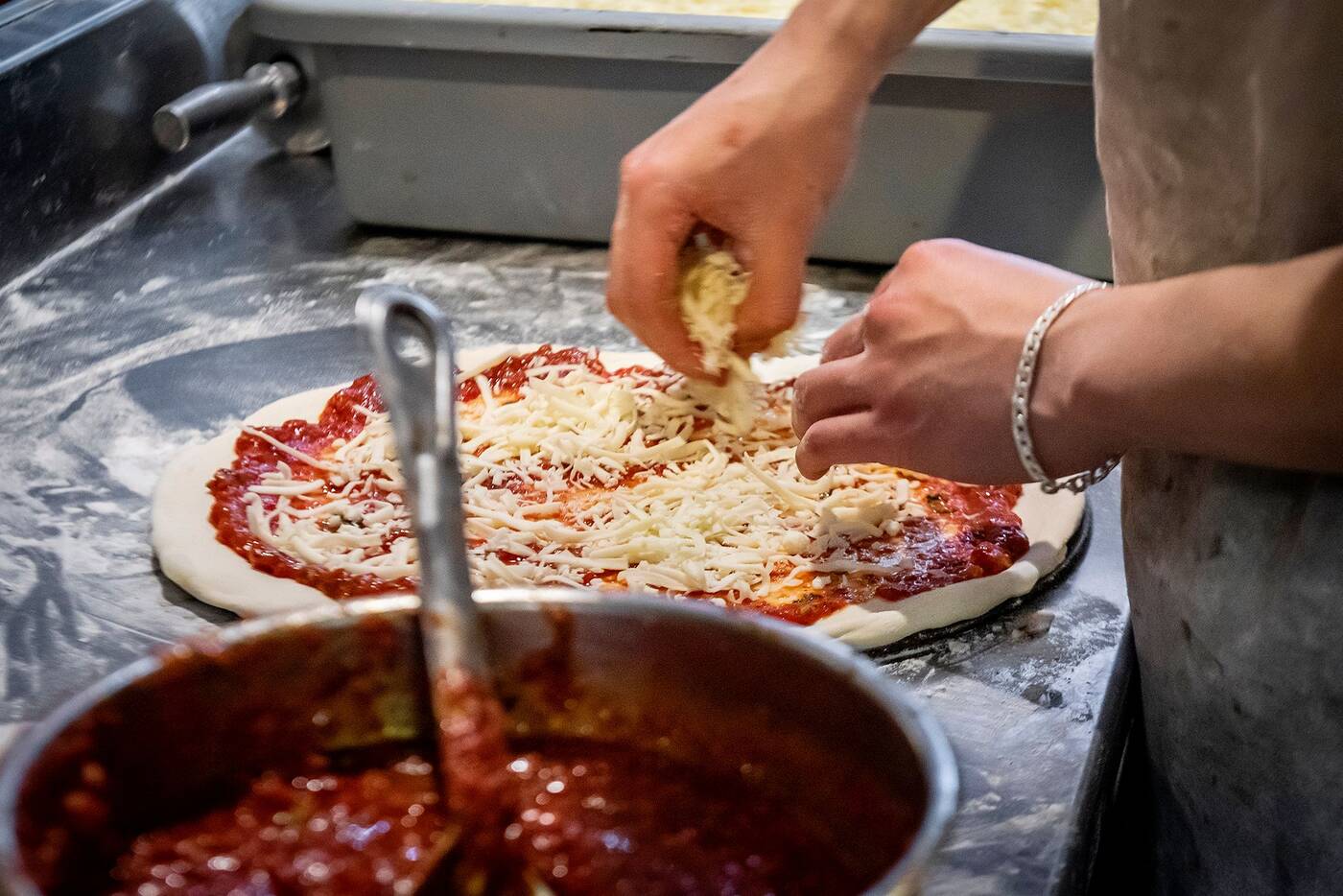 Although it's been around a long time, one thing remains the same: the love people have for King Slice's dough and sauce, not from a can but made with real tomatoes. 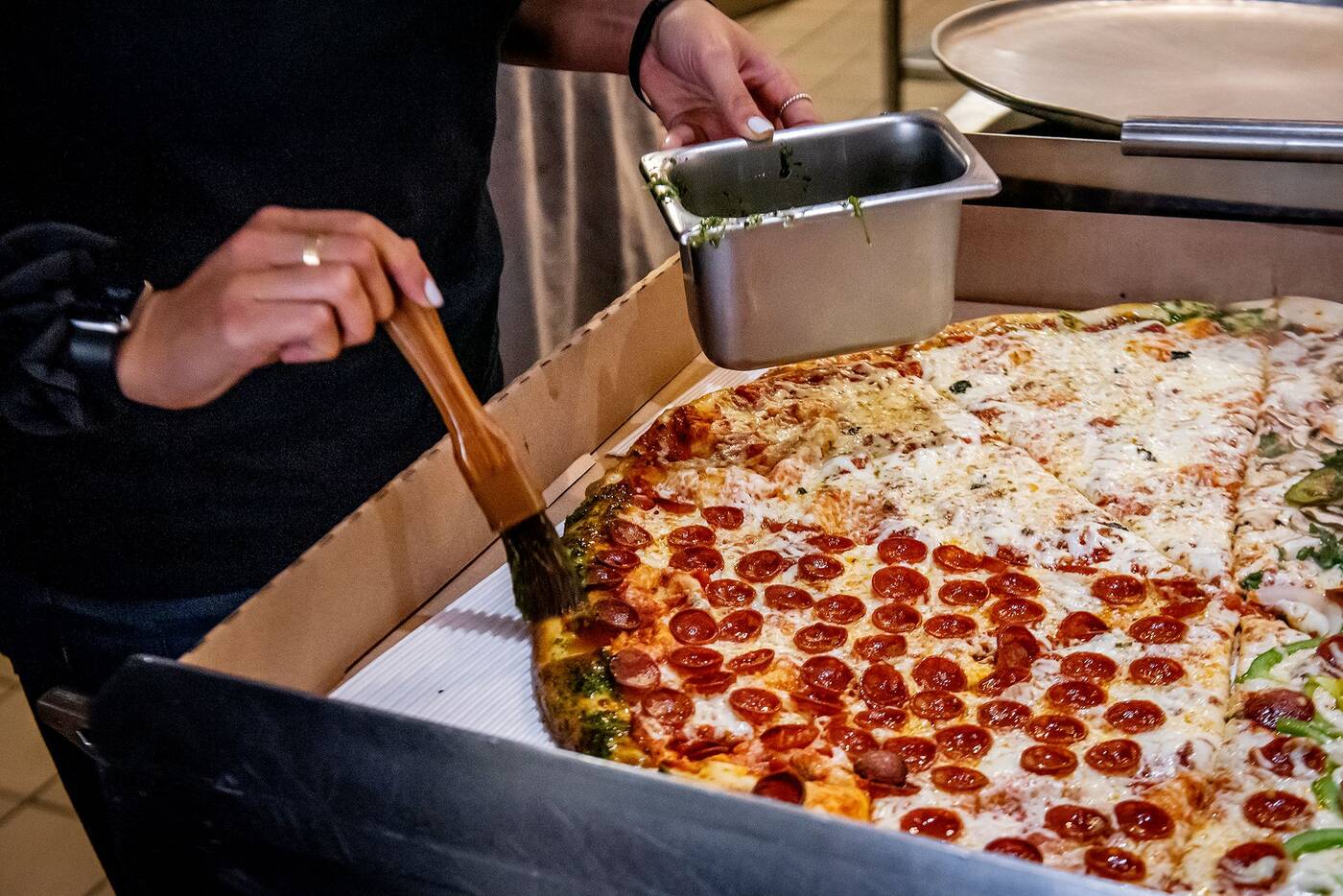 To this day, they're known for their iconic garlic oil, a spread of olive oil, garlic and parsley which is brushed onto the crust of each pizza, a technique that Vo's father borrowed from his time at Massimo's. 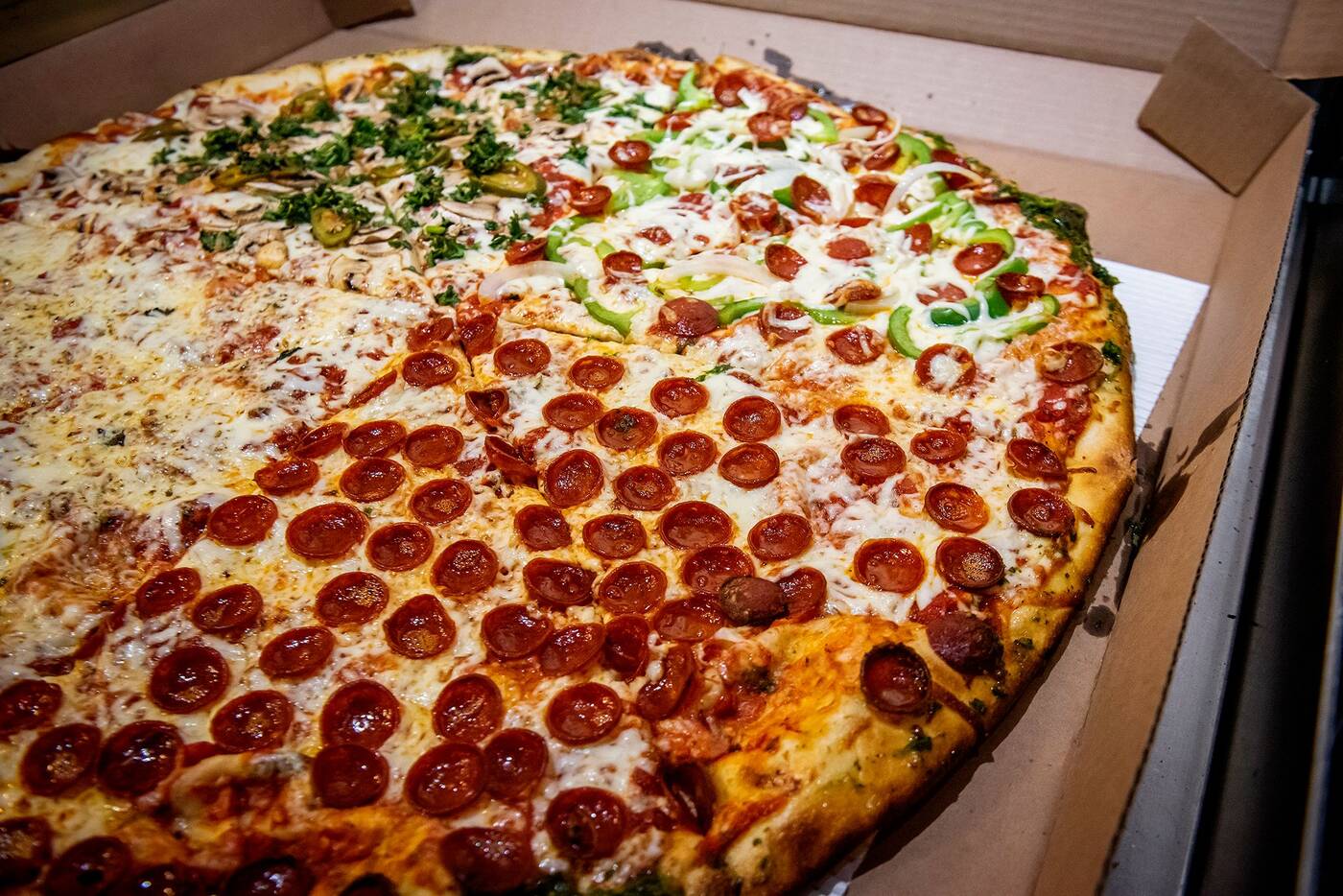 A new addition to the menu is their massive double extra large pizzas ($60.00). Enough to feed a whole army, the slices are bigger than the size of your head.

You can customize the pizza to your liking, choosing any combinations of toppings, perfect for parties or large gatherings (once it's safe to do so again). 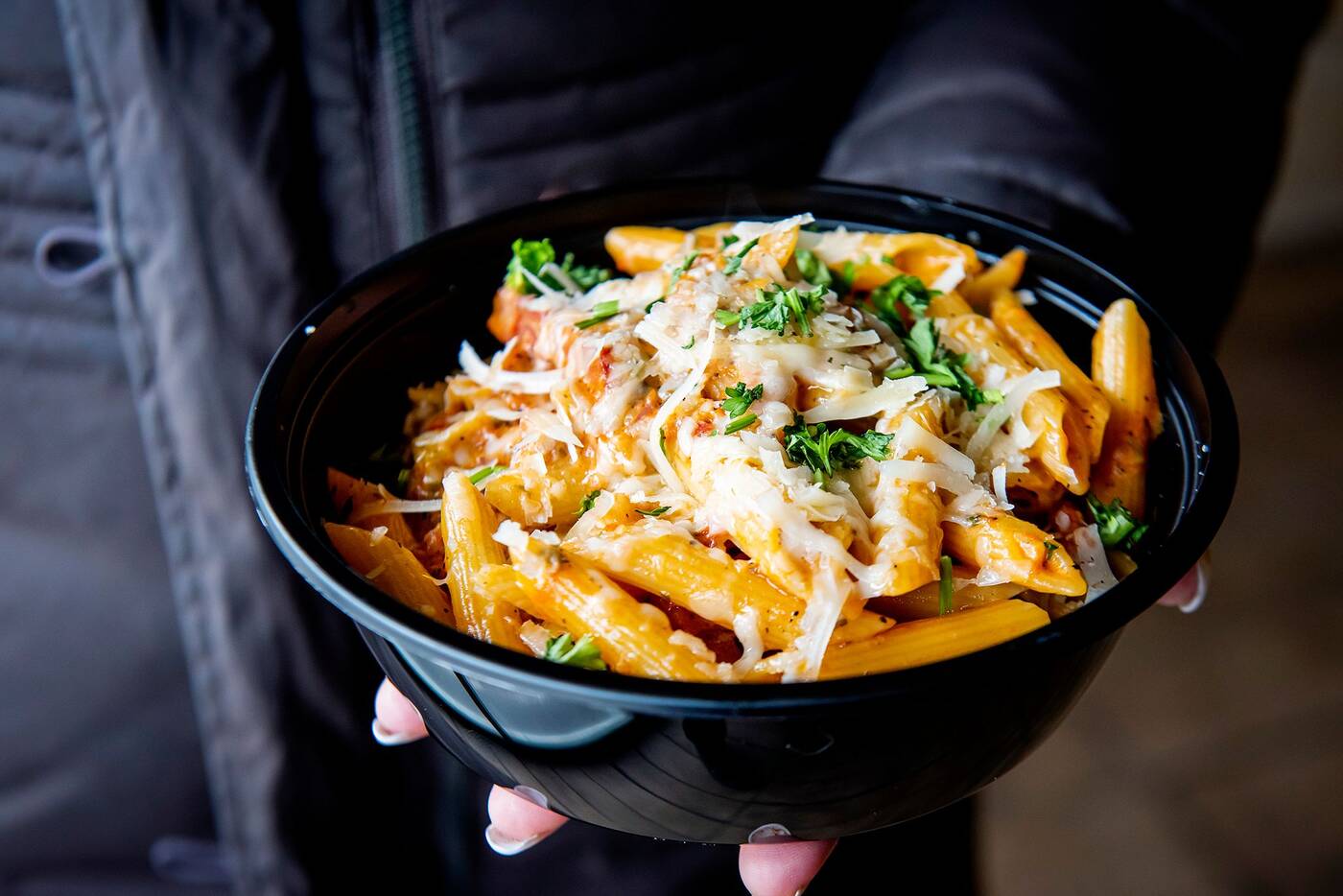 The Penne Alla Vodka ($13.50) will fill you up for more than one meal. Spicy Capocollo, an Italian pork cold cut is sauteed in a pan with green onions, a splash of vodka and rose sauce. 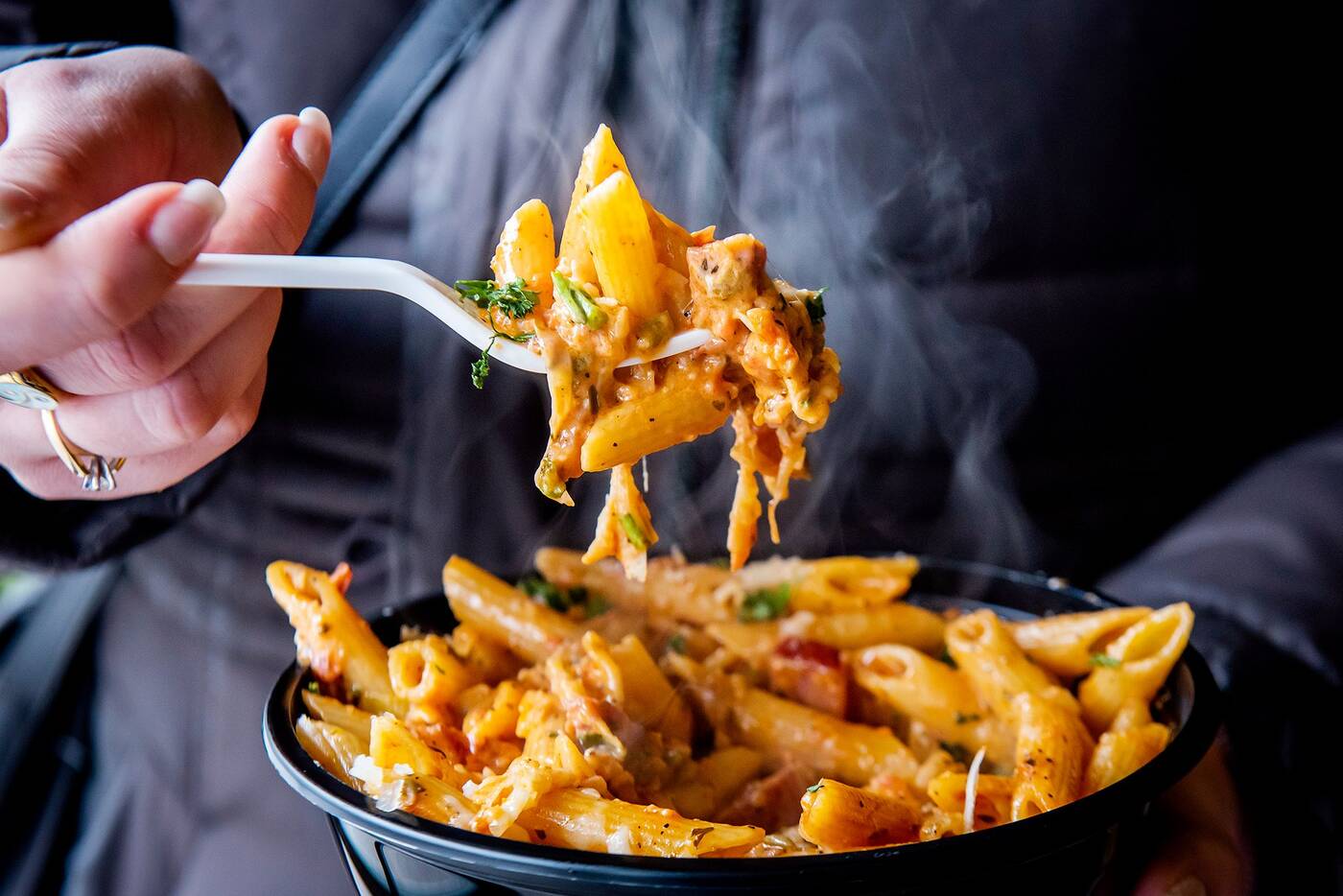 It's then folded into heaps of steaming penne pasta, garnished with mozzarella and parsley, then served with two slices of garlic bread. 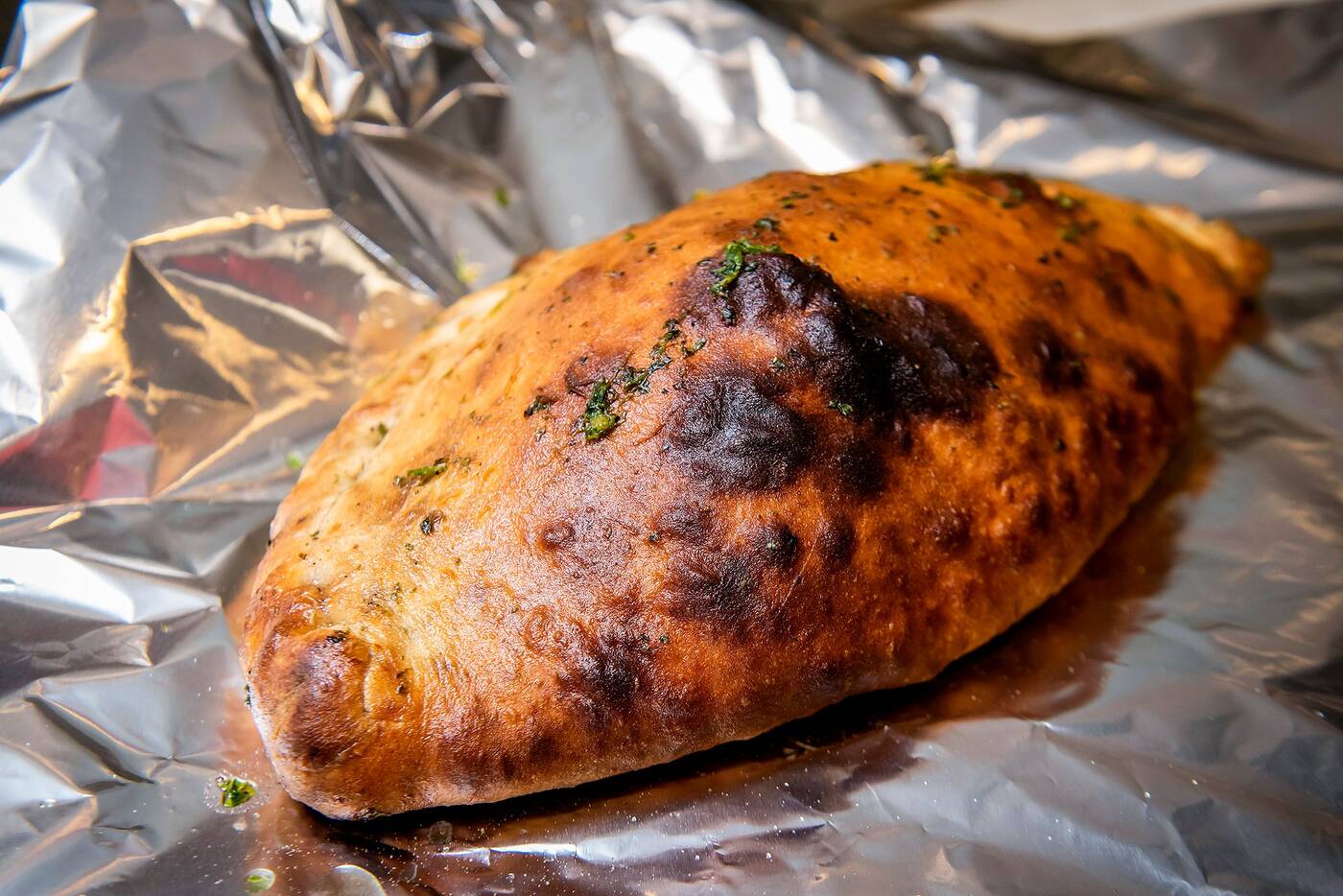 If you're feeling for something different than a pizza, but still want King Slice's fresh toppings, opt for a Calzone ($11.00). 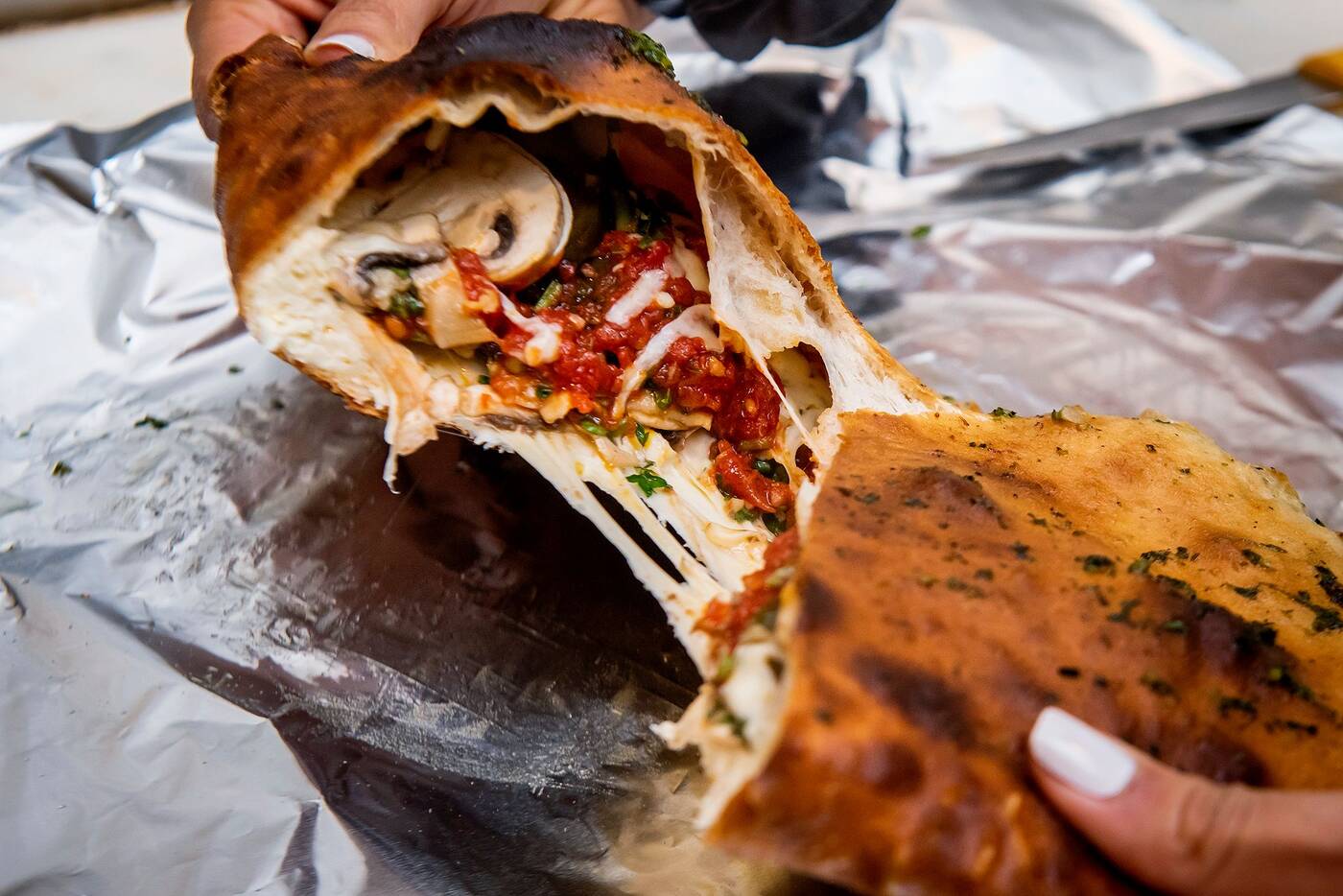 Each topping is an additional $1.50, you can also ask for a  brush of garlic oil on top of the Calzone before you dive in. 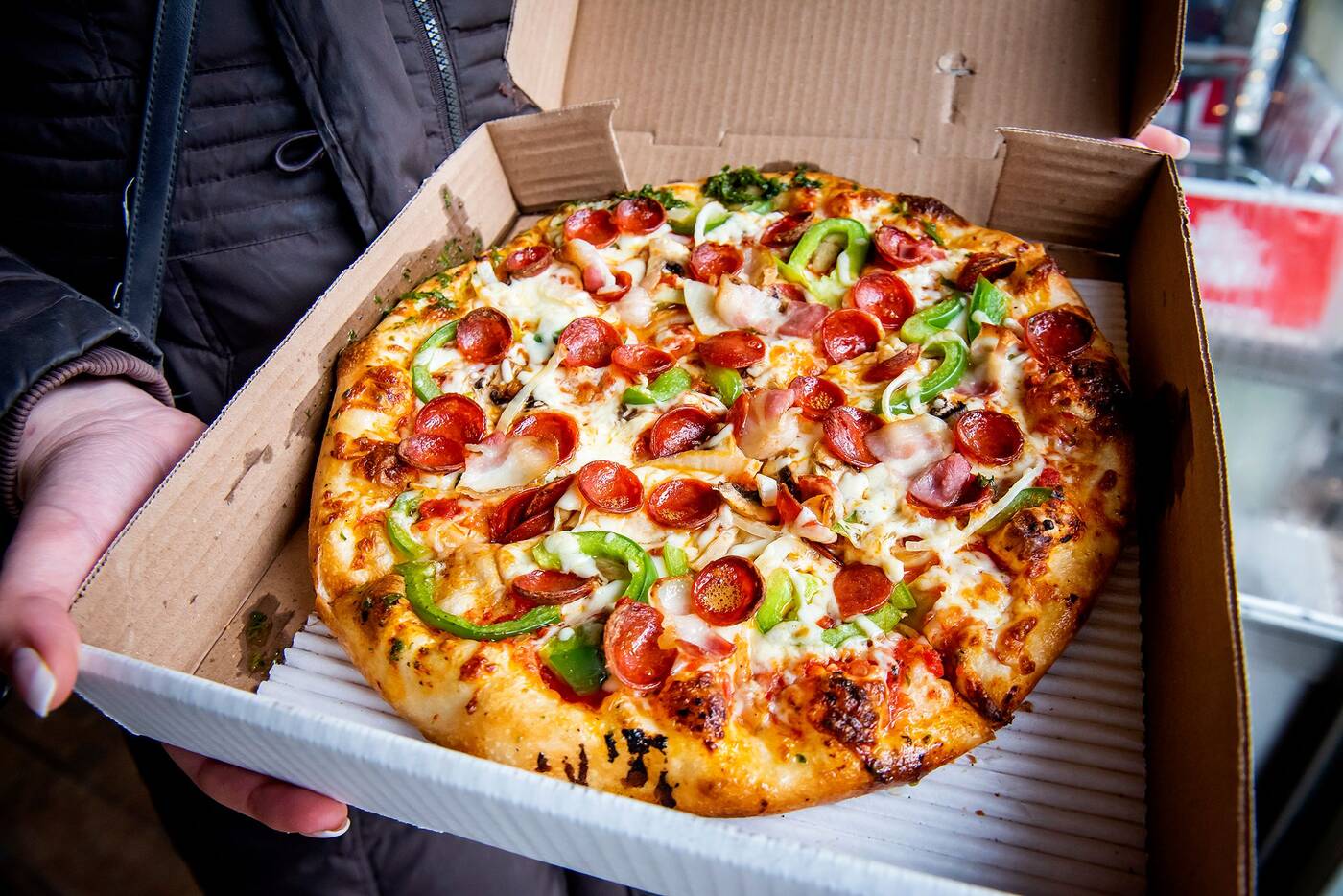 A doubled amount of mozzarella cheese is used at the base with tomatoes, then green peppers, mushrooms, onions are added on top, with pepperoni and bacon used for the meat. 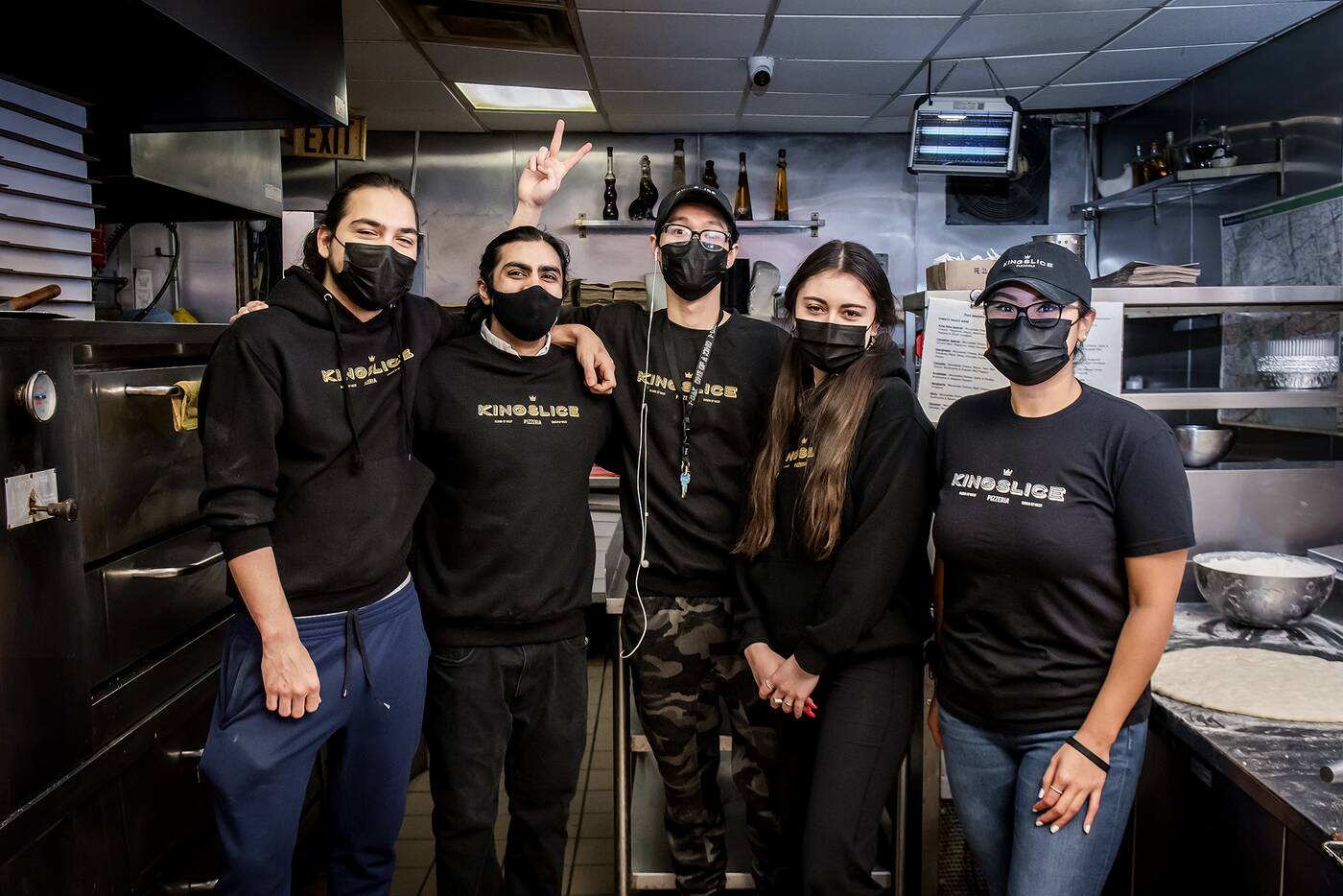 King Slice's quirky character is strewn across the front of the building with cartoon art of pizza toppings decorating the brick below the store's name. 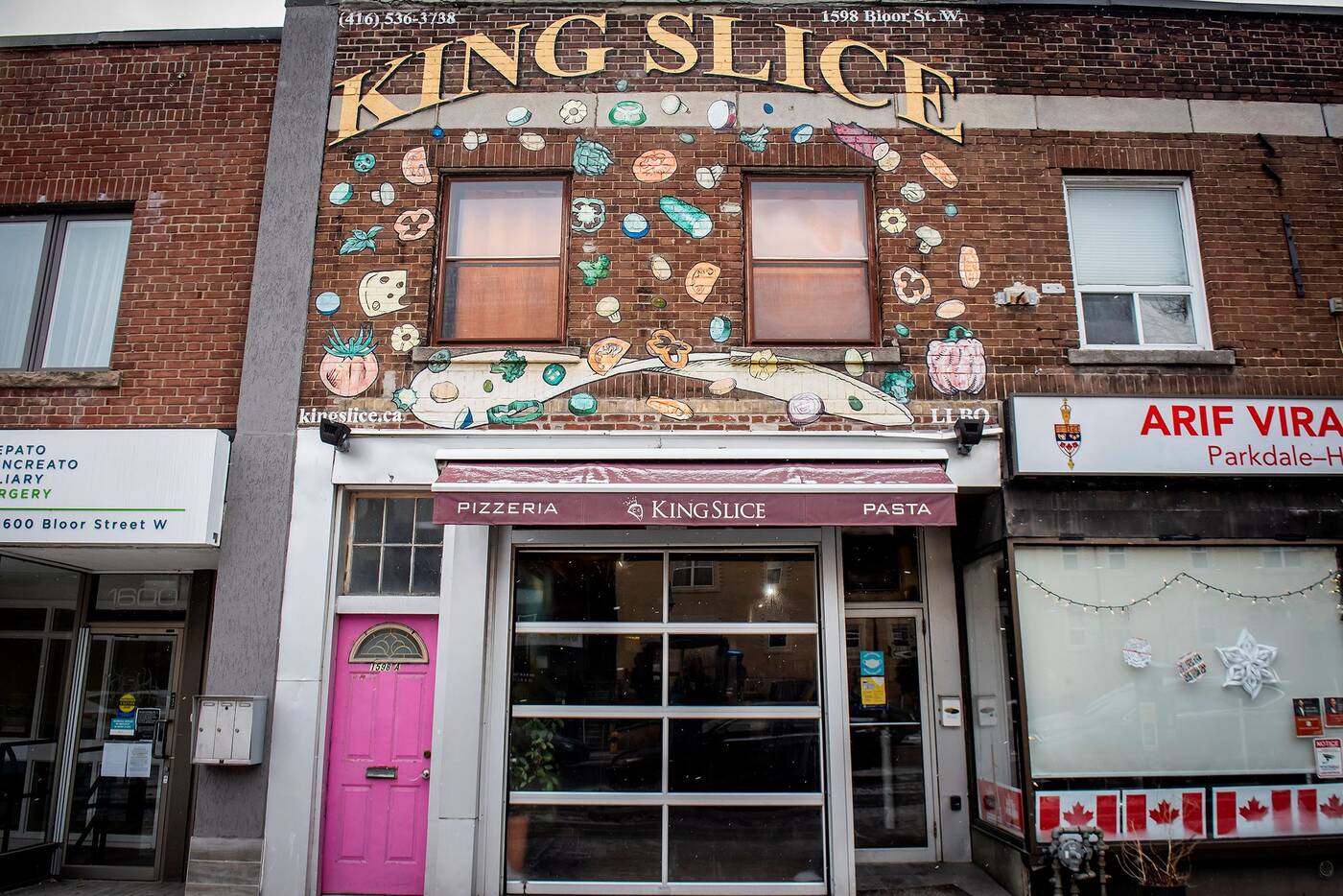