Like every other growing urban centre in the world, Toronto has seen a massive evolution over the last decade, and not without its casualties.

Over the span of 10 years, the city has lost countless cultural institutions and hallmarks—and picked up an affordable housing crisis along the way—that made Toronto the city we've loved to call home since the turn of the aughts.

Steeling ourselves for another decade of change (read: destroying iconic businesses for condos), let's take a cue from the ghosts of Christmas Past to lament all the losses our city has had to endure in the name of progress.

Here are my picks for things Toronto lost in the last decade we'll miss the most.

Just look to the gaping chasm at the corner of Bloor and Bathurst for the grim reminder that Toronto's 70-year-old department store is no more.

The kitschy palace closed its doors officially on the last day of 2016, and what followed was its slow, painful demise, turning this bastion of affordable everything into a sad pile of rubble. Mirvish Village won't be done until 2022, at least. 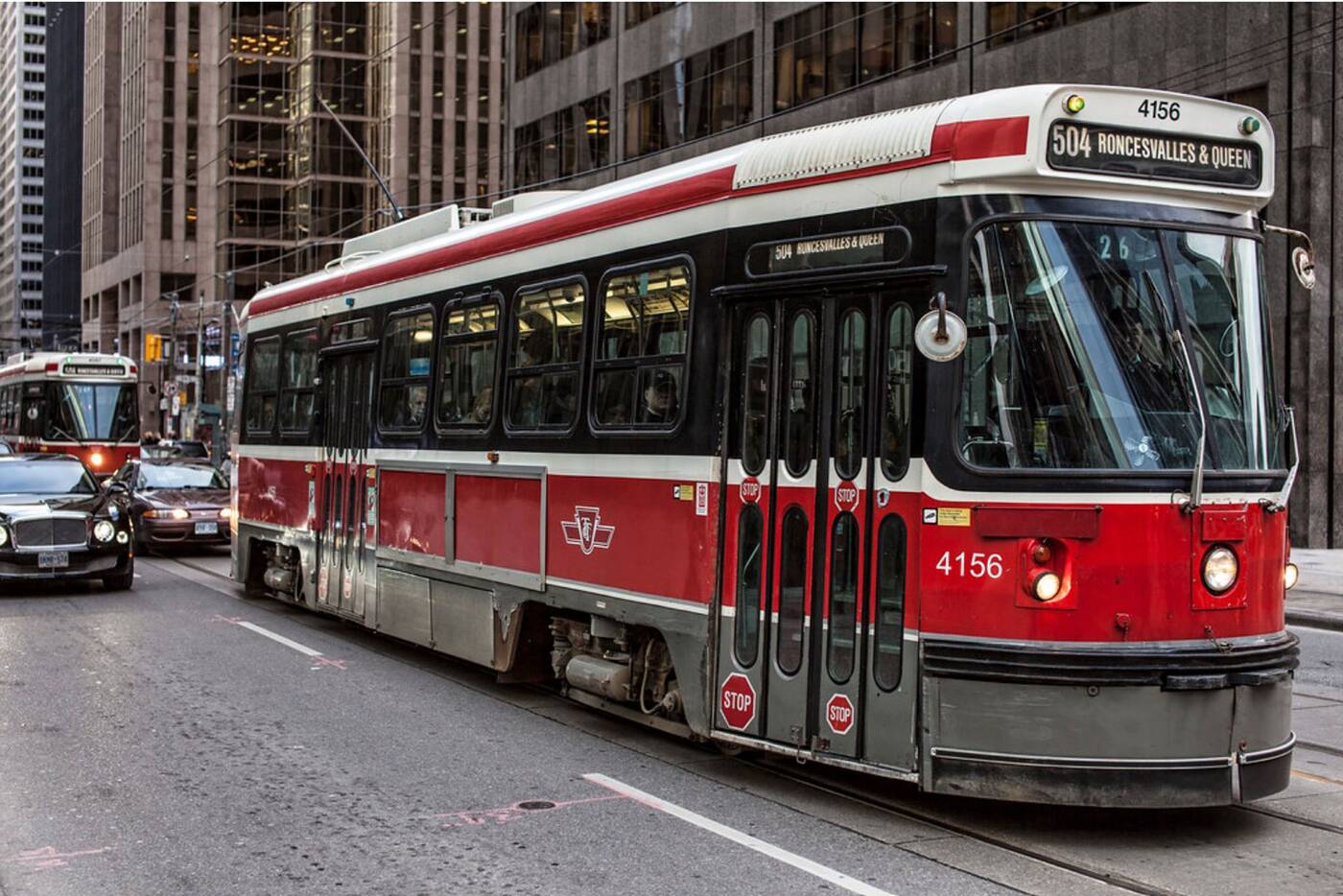 Toronto's decades-old LRVs are officially out of commission. Photo by Ben Roffelson.

The CLRV streetcars (and their articulated siblings, the ALRVs) have been retiring one by one for several months now. The end of 2019 will mark a new era of streetcar, with the LRVs completely replaced by Bombardier's Flexity streetcars.

To be fair, the Flexitys are way more accessible, plus, some of the LRVs have been around for nearly 40 years, making sense to replace them. Still, we're sad to see them go to the junk yard. R.I.P., you trusty (for the most part) Toronto steeds. 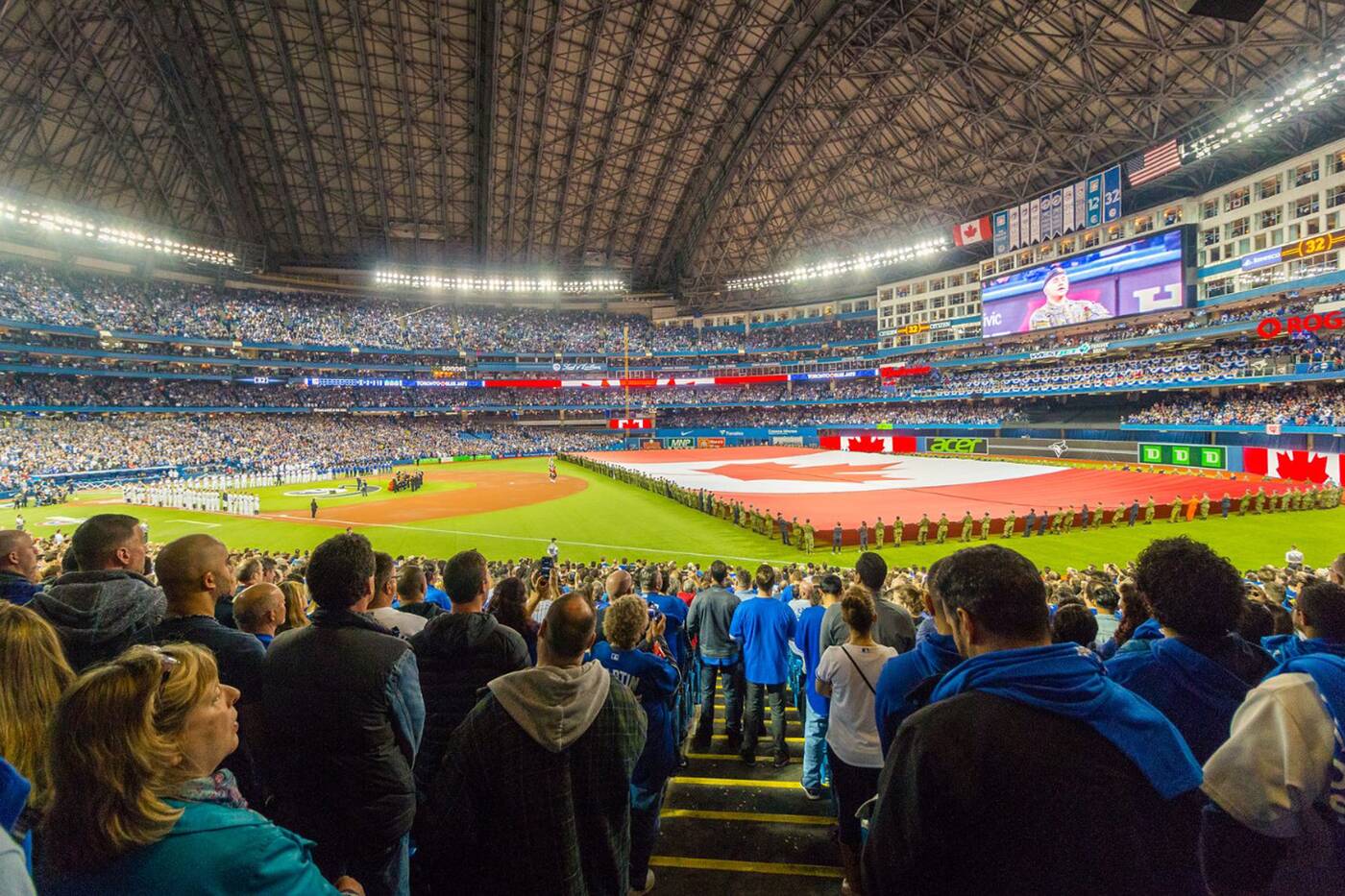 The Rogers Centre's Toonie Tuesday deal was discontinued in 2009. Photo by @bluejayshomeopener.

For a brief moment in Toronto sports history, baseball fans could snag a Jays ticket for $2 on Tuesdays. With a deal like that, what could possibly go wrong?

You can thank drunken brawls for the discontinuation of this 2008 promotion. Evidently, all the money that game-goers saved on tickets went to booze instead, and the entire deal turned into an alcohol-fuelled fiasco that got so bad, alcohol sales were banned from the $2 sections for two games.

By 2009, Toonie Tuesdays had been discontinued completely. If only they'd brought it back this year; it might have helped with 2019's abysmal home opener sales. 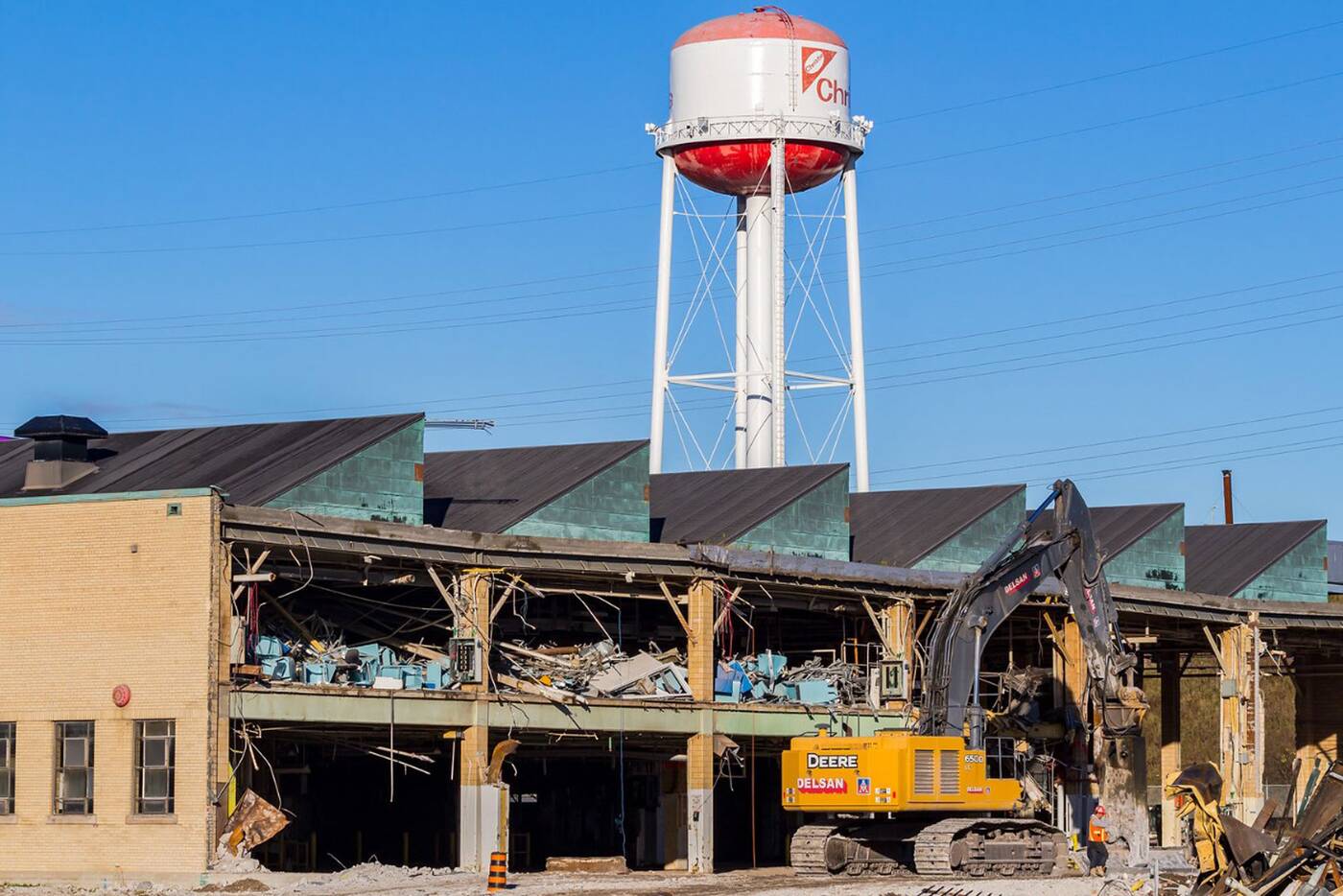 The Mr. Christie cookie factory closed down after 60 years, and demolished in 2018. Photo by Nicoli OZ Matthews.

The scent of freshly baked cookies stopped drifting around the Lake Shore and Park Lawn area in 2012, when Kraft's Mr. Christie's bakery officially closed. And for five years, the 27-acre site sat quietly before being demolished in early 2018.

Construction is now underway for a mega development which includes a transit hub, new shops, restaurants, and condos. The sweet, sweet smell of Mr. Christie's goodies will be missed, but that's just how the cookie crumbles in Toronto. At least the water tower is still there. 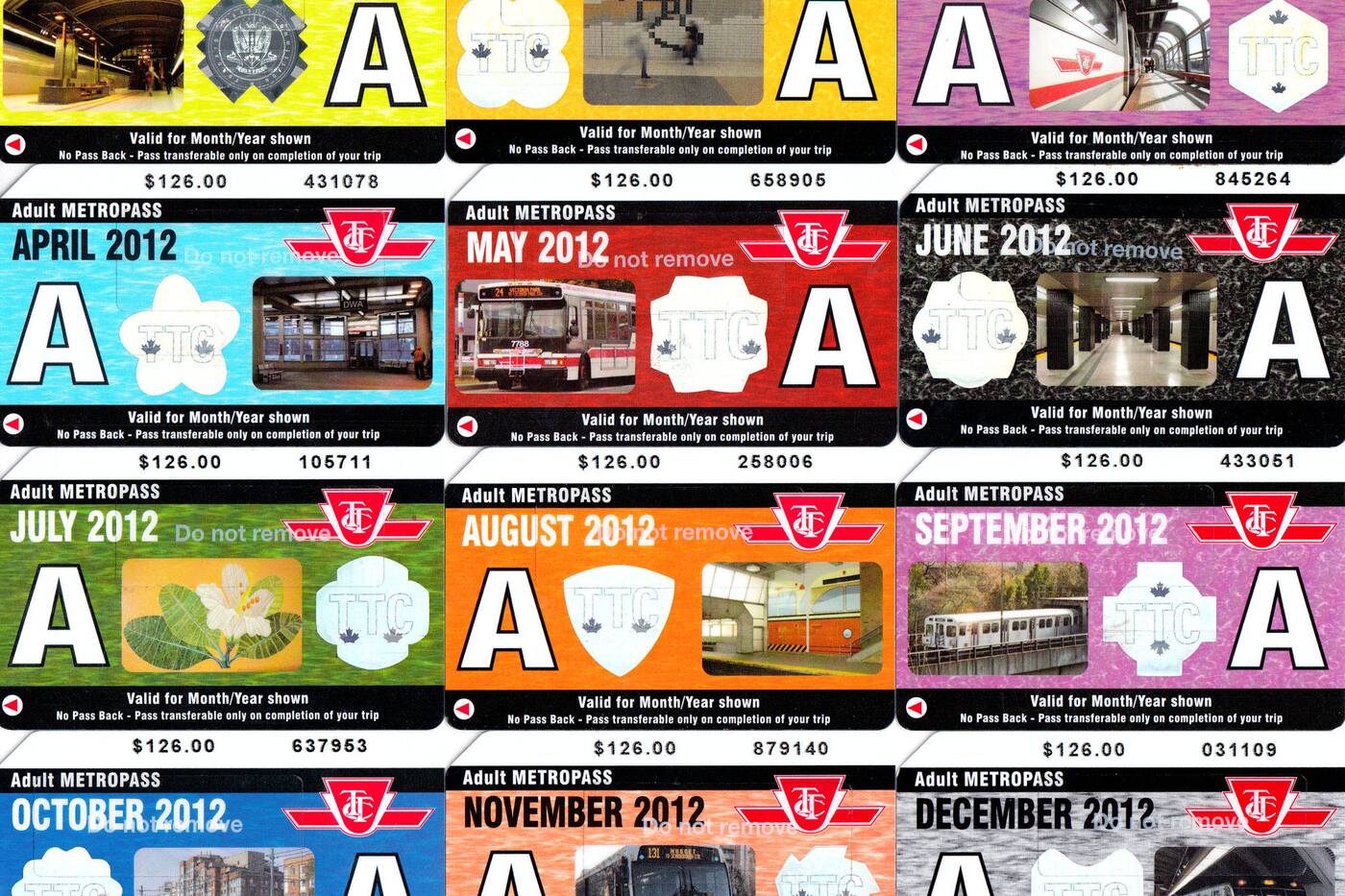 The TTC metropasses were discontinued officially in 2018. Photo by Matt Watson.

At the end of 2018, the city bid its final goodbye to Metropasses, which were basically the Pokemon cards of the TTC (gotta buy 'em all).

The end of these colourful cards marked a major step forward in the arduous and drawn-out transition to the Presto system—one that the TTC wasn't exactly ready for.

Tokens and tickets have also been been nixed since then, but they won't be missed by nostalgic transit heads as much as these rainbow-coloured pieces of plastic, decorated with Toronto landmarks no less. 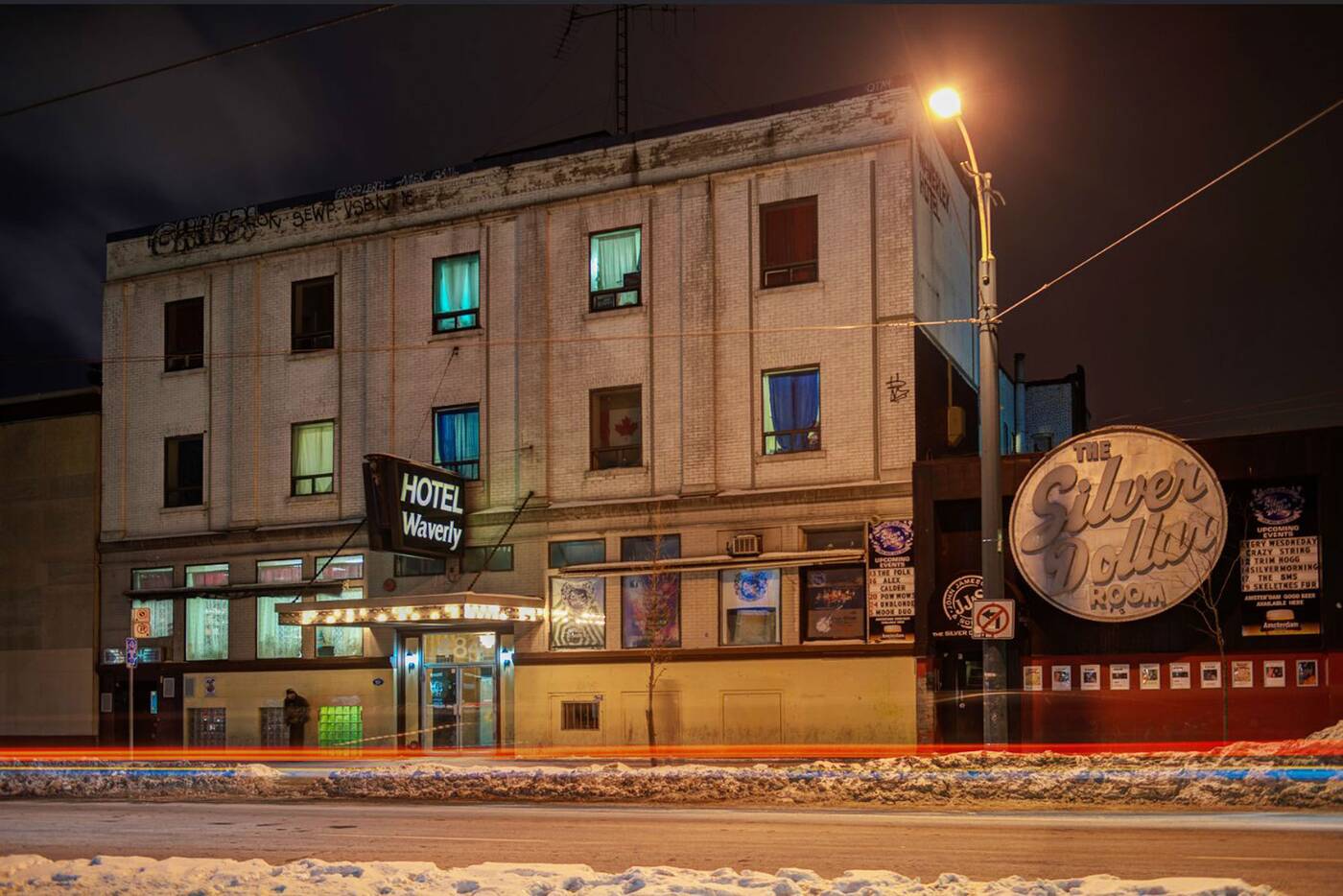 Both Hotel Waverly and The Silver Dollar were demolished in 2017. Photo by Lori Whelan.

Hotel Waverly and The Silver Dollar

What's worse than losing a dilapidated but beloved 113-year-old hotel? Losing the 60-year-old music venue next to it, despite its heritage designation, and amidst a slew of other noteworthy music venues lost leading up to the destruction in 2017.

A small glimmer of hope: the vibrant venue at Spadina and College will purportedly be rebuilt, original sign and all, as part of the 15-storey residential complex that will replace it.

But with new builds come pricier rent, which very well might lead to a different Silver Dollar than the one we knew before. We'll have to wait and see. As for Hotel Waverly, its displaced residents have had to find new permanent lodgings. 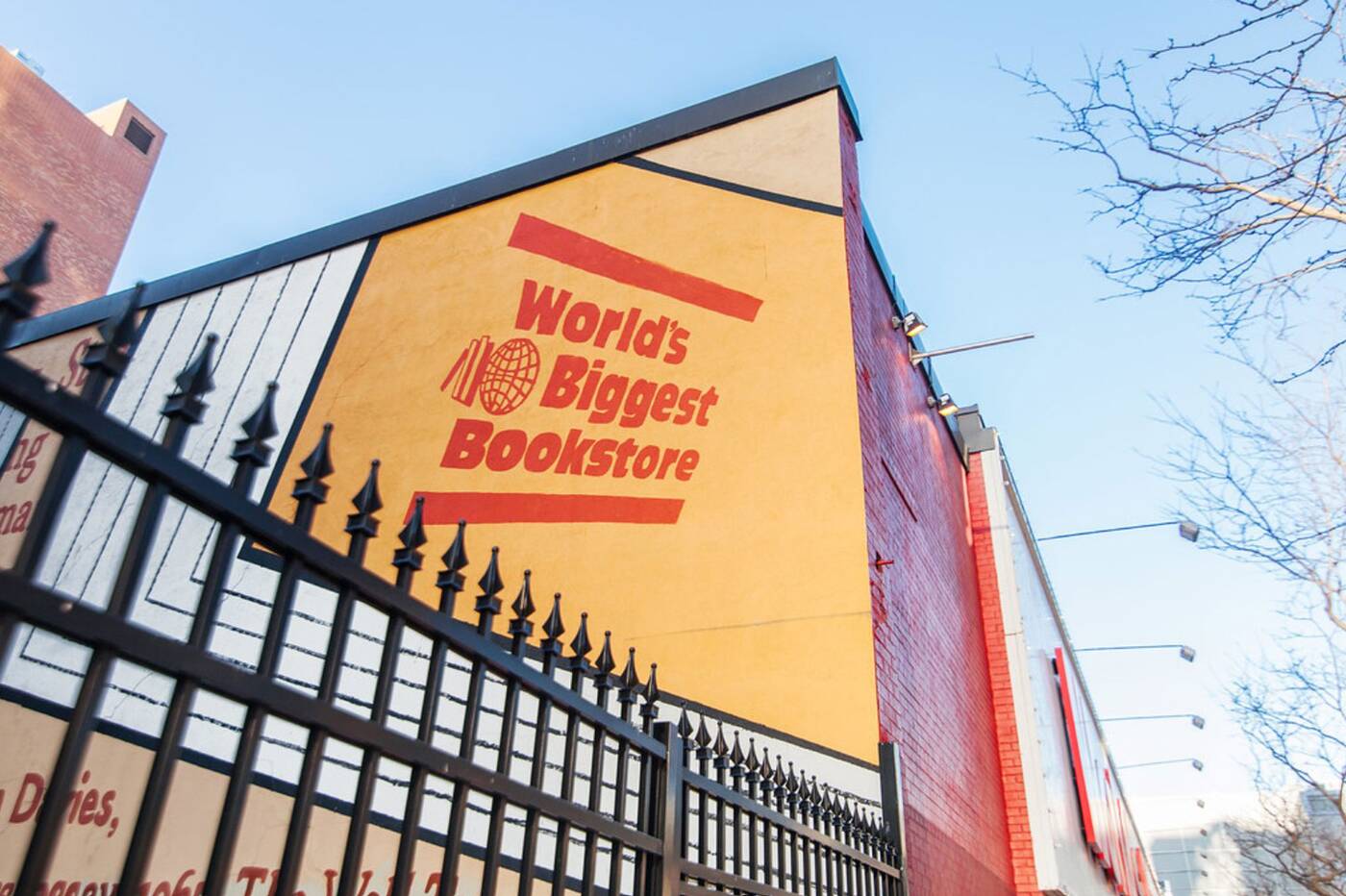 It may not really have been the world's largest bookstore, but the loss of this massive literary emporium on Edward Street still hurt big time for Ryerson students and book aficionados.

The demolition of the store's yellow walls and quirky signage was a long time coming, but it didn't make it any better that the 'restaurant row' meant to replace it has now evolved into a 35-storey condo development. 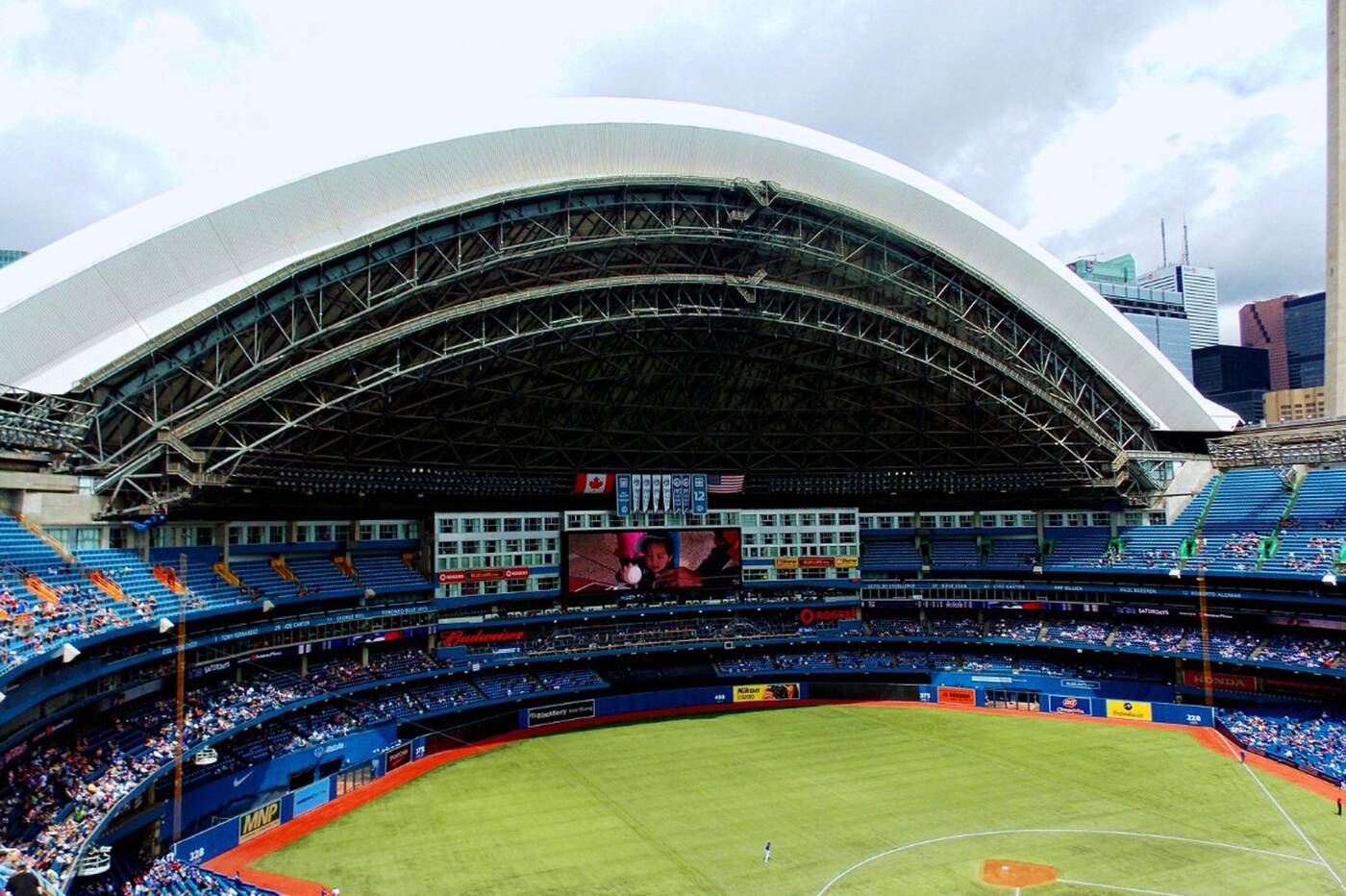 It may be called the Rogers Centre now, but the name SkyDome is forever. Photo by Nicky Jameson.

We're in an era of human society where basically every major stadium in Toronto is named after some massive corporation: Sony Centre, the Meridian Arts Centre, Air Canada Centre, the Rogers Centre, the list goes on.

But before the horrible renaming curveball of 2004, the latter was simply called the SkyDome: a title picked from over 150,000 suggestions in a naming competition in 1987. It's a dome, and it opens to the sky—makes perfect sense.

It was a simpler time, a purer time, untarnished by the corporatization of the wholesome cult that is sports fandom. For most of us, "Rogers Centre" still leaves a bad taste in our mouths. It's SkyDome to the end, baby. 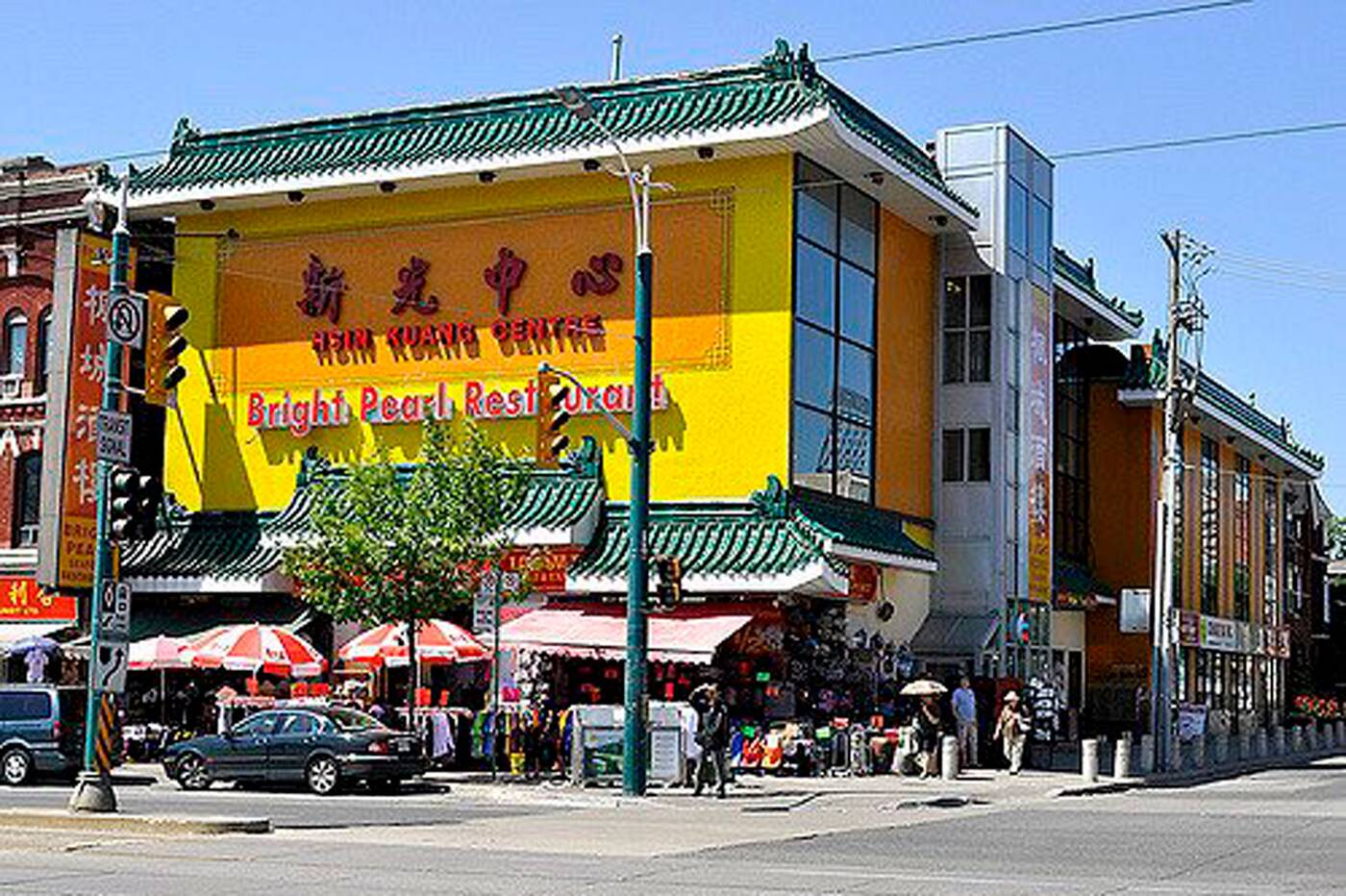 Formerly the Jewish Lyceum, the Hsin Kuang Centre was torn down in 2018. Photo Christopher Clark.

Easily one of the most shameful renovations of the decade (second only to, maybe, the ROM's Crystal, which made the list of world's ugliest buildings in 2009) was this ghastly makeover of Chinatown's Hsin Kuang Centre.

Some may not recognize Hsin Kuang by name, but they might remember what used to be the bright yellow building with traditional Chinese gable roofs and foo dogs guarding the door. It was also home to a number of notable Chinese businesses, and before that, the Jewish Lyceum where the anarchist Emma Goldman was laid to rest.

One of the foo dogs went missing during renovations (they're both gone now), and the building has since become a bland, unoccupied office building, mostly used as a meeting place for people roughing it out. A sad end for a storied space. 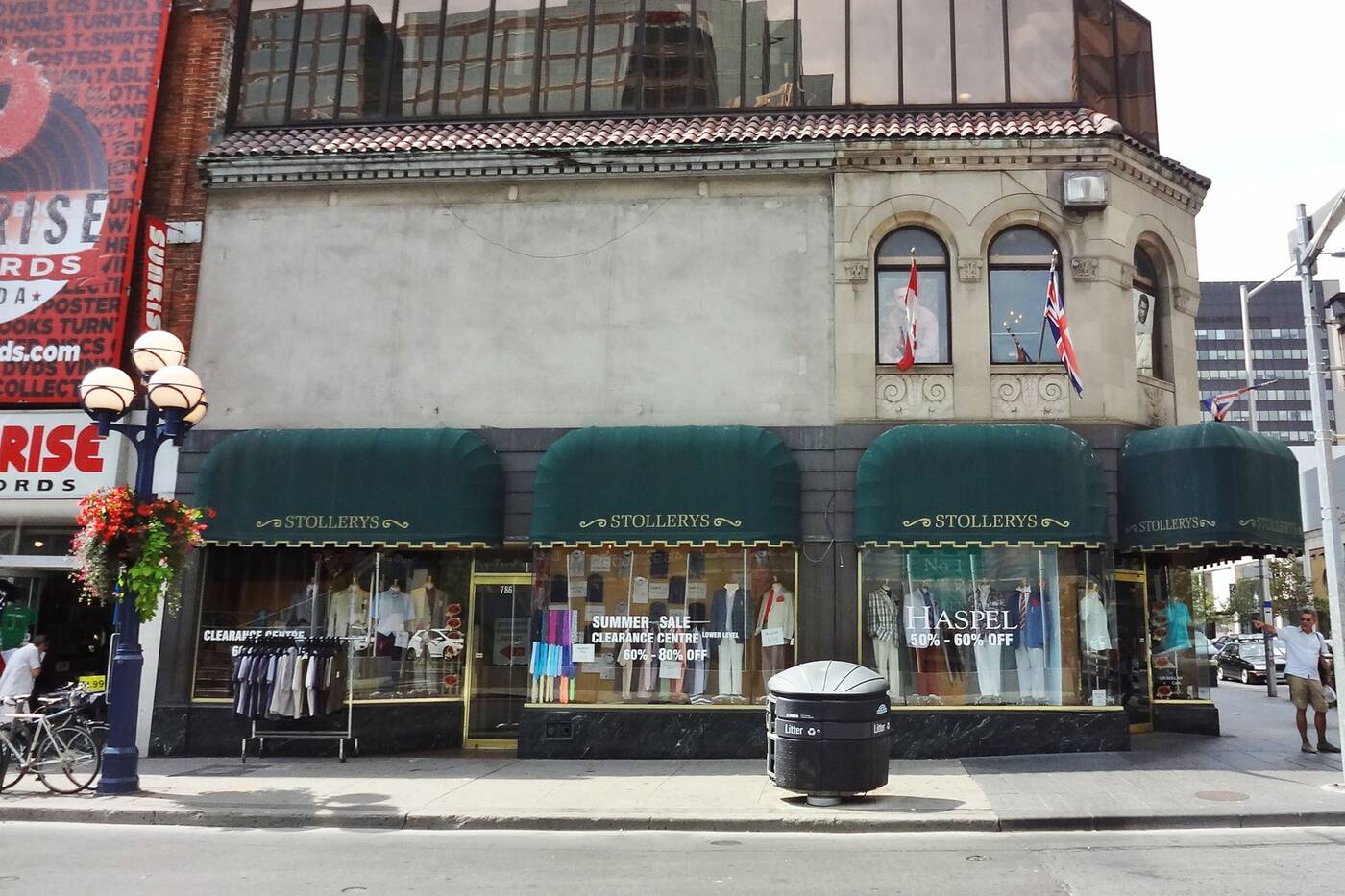 Stollerys was one of the oldest businesses in Toronto before it was demolished in 2015. Photo by Jim Cagney.

Anchoring the southwestern corner of Yonge and Bloor for 114 years was the menswear retailer Stollerys—that is, until it was hastily destroyed by Mizrahi Development in 2015.

In a blink of an eye, the Art Deco building with its stone carvings, arched windows, and green store awnings was gone, torn down by wrecking crews on a weekend before a heritage designation could even be considered.

The entire site has since been excavated to make room for what will become the extravagant 86-storey luxury condo, The One. But the entire ordeal sparked a pretty important conversation about developers' rights which, I hope, will continue in the 2020s.