This is what's replacing the World's Biggest Bookstore

When the World's Biggest Bookstore was first slated to close, its replacement was pitched as a low-rise restaurant row. Now, some two and a half years since the bookseller announced its demise, the final plans for a new development at 20 Edward Street await city council approval before construction will begin.

Contrary to early plans, a condo will indeed rise on the plot once occupied by the giant bookstore. Last year, the restaurant row idea was ditched in favour of a 35-storey tower, but that met with a number of planning problems, not the least of which was the fact that the proposed building interfered with the flight path of helicopters headed to and from Sick Kids Hospital.

The latest proposal, which has the blessing of city staff, has scaled the project back to 30 storeys and made the massing of the building more attractive by breaking up the facade into two distinct styles. It's a far cry from the original proposal, but the plan is to keep a heavy retail presence on the ground floors.

There might also be a new entrance/exit to Dundas Subway Station as part of the mix according to documents filed with the city. There's long been talk of putting a second access point to Dundas near Yonge and Gould, but with that site in limbo, this might reduce the congestion faced at Yonge and Dundas, which seems to be perpetually busy.

There was considerable surprise when the restaurant row idea was tabled in early 2014. The site seemed an obvious candidate for a condo development. Pat yourself on the back if you were a non-believer back then. 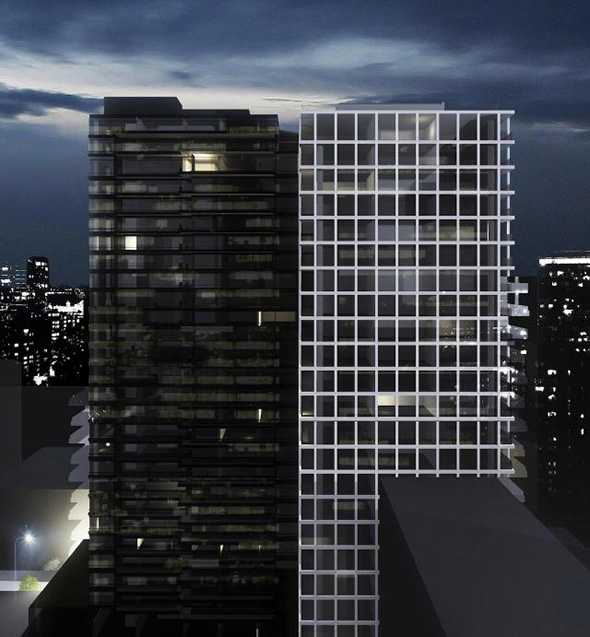 Renderings via the City of Toronto / Lifetime Developments.