The top 30 vegetarian restaurants in Toronto by neighbourhood

Vegetarian restaurants in Toronto are herbivore-friendly places to get your food fix. Whether you're looking for a killer grain bowl, a nutritious smoothie or a plant-based, meat-shaped meal, Toronto's love of veggie food means you're covered anywhere you go.

Here are my picks for the top vegetarian restaurants by neighbourhood.

Yes, dive bars can be vegan too. Disgraceland is all about comfort food like poutine and burgers, but with ingredients like soy protein and vegan bacon instead.

Green Earth Vegan Cuisine is a family-owned spot that's been serving the Danforth community since its move from East Chinatown a few years back. Fettuccine alfredos and burgers are all made with "chick'un" breast instead of real chicken.

Jerk and BBQ tofu, rasta pasta, and a world famous corn soup is what Vegan I Thali is all about. Get a bowl straight from Corn Soup King himself, Kurt Davson, who you can catch in front of the store stirring up soup during the summer.

Head to the homey E.L. Ruddy for delicious, made-from-scratch eats off a Mexican-inspired menu. The "pulled pork" bowls are popular, as are the mushroom grilled cheeses. 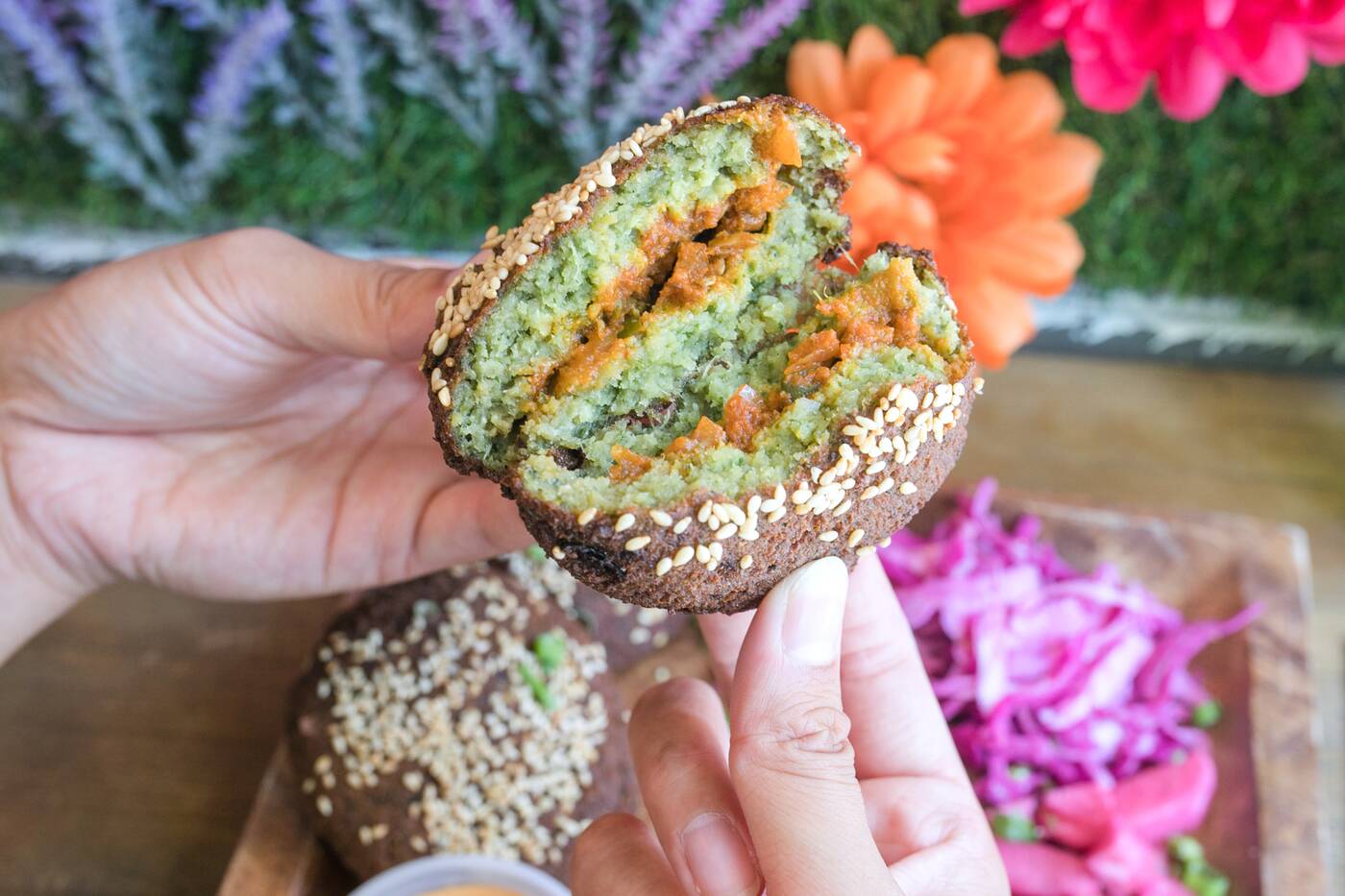 To anyone who's ever claimed vegetarian restaurants don't have enough options, direct them to Simon’s Wok. This Chinese spot has 111 items on their menu, from fried noodles with bean curds to eggplants and tofu.

There's plenty of vegetarian Thai options at Khao San Road despite it not being a strictly veggie spot. They even have a full separate vegan menu with options like curry, minus the fish sauce.

The vegetarian Indian hot counter Brar is an absolute gem on Islington Avenue. Seven-item thalis are the main fare here, where you pick from mouthwatering options like malai kofta with naan and roti.

Most vegetarians crave a fat juicy burger now and then, right? Planta Burger has you covered, with burgers that fulfil all your greasy, cheesy needs, without the actual cheese. Expect patties made completely from veggies, mushroom "bacon" and potato-based queso.

Pure vegan eats with Asian influences are what's on the menu at Green Haven on Dundas Street West. Think plant-based takes on takoyakiand chicken salads made with soy-based chicken strips. 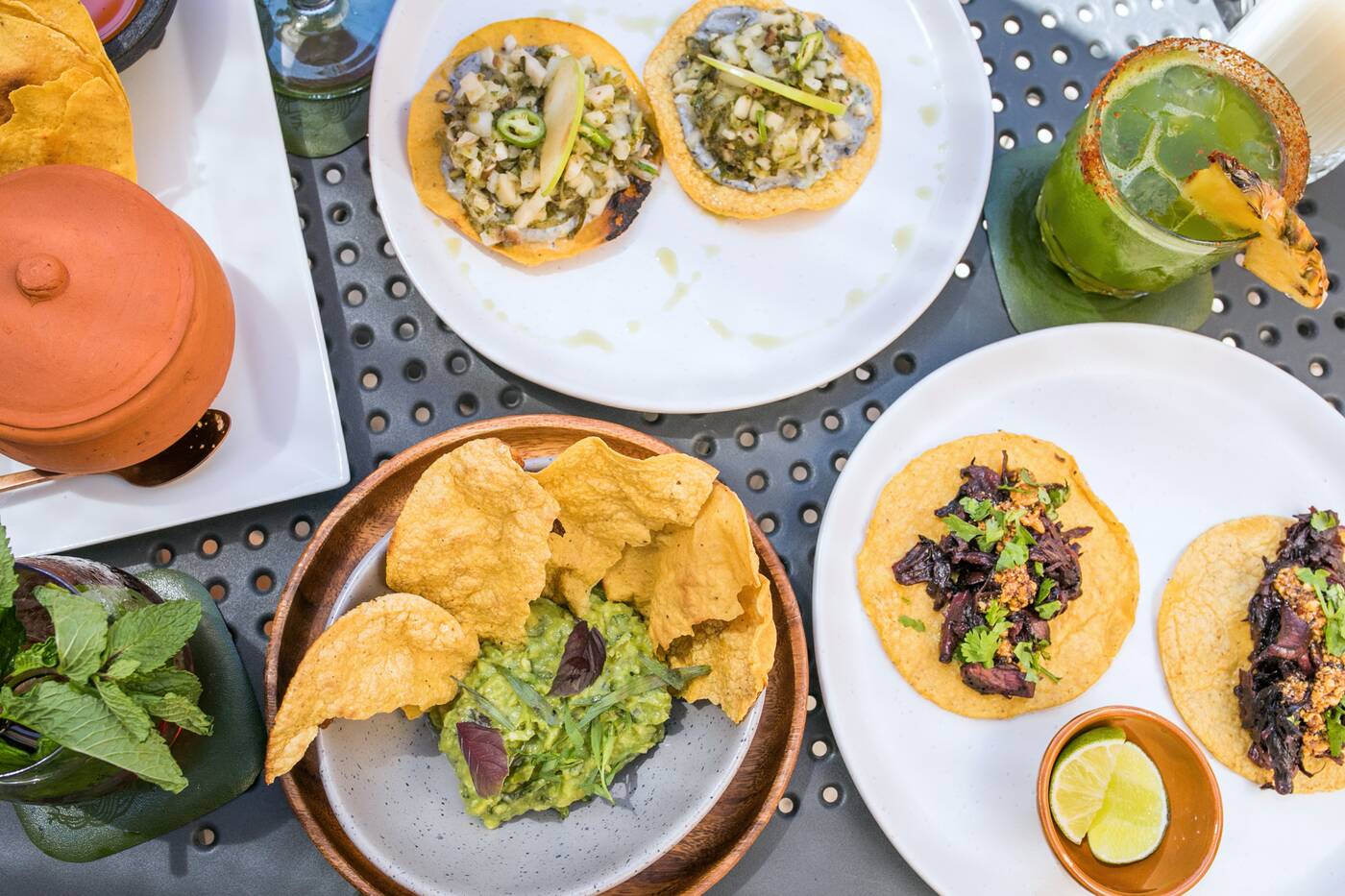 Eat Nabati literally translates eating vegetarian, in Arabic, so it makes sense that everything at this Egyptian takeout spot is totally meat-free. Hulking falafels filled with vegan halloumi cheese will leave you stuffed.

Toronto's quintessential vegan restaurant, Fresh, has a location on Front Street that's bigger than the rest. Nom on their crushable quinoa onion rings and banquet burgers, and maybe sip on one of their cocktails (aquafaba instead of egg yolks, of course).

Easily one of the most stylish restaurants to eat vegan is LOV, the Toronto iteration of the Montreal-based chain. Pretty plates of wedge salads or General Tao sub out meat with tempeh bacon and pan-seared tofu.

Pizza might be the ultimate unhealthy food, but not so at Apiecalypse Now where the thin-crust pies are completely vegan. As if that weren't temping enough, they also make replicas of the pink Simpson's donuts which are completely dairy and gluten free. 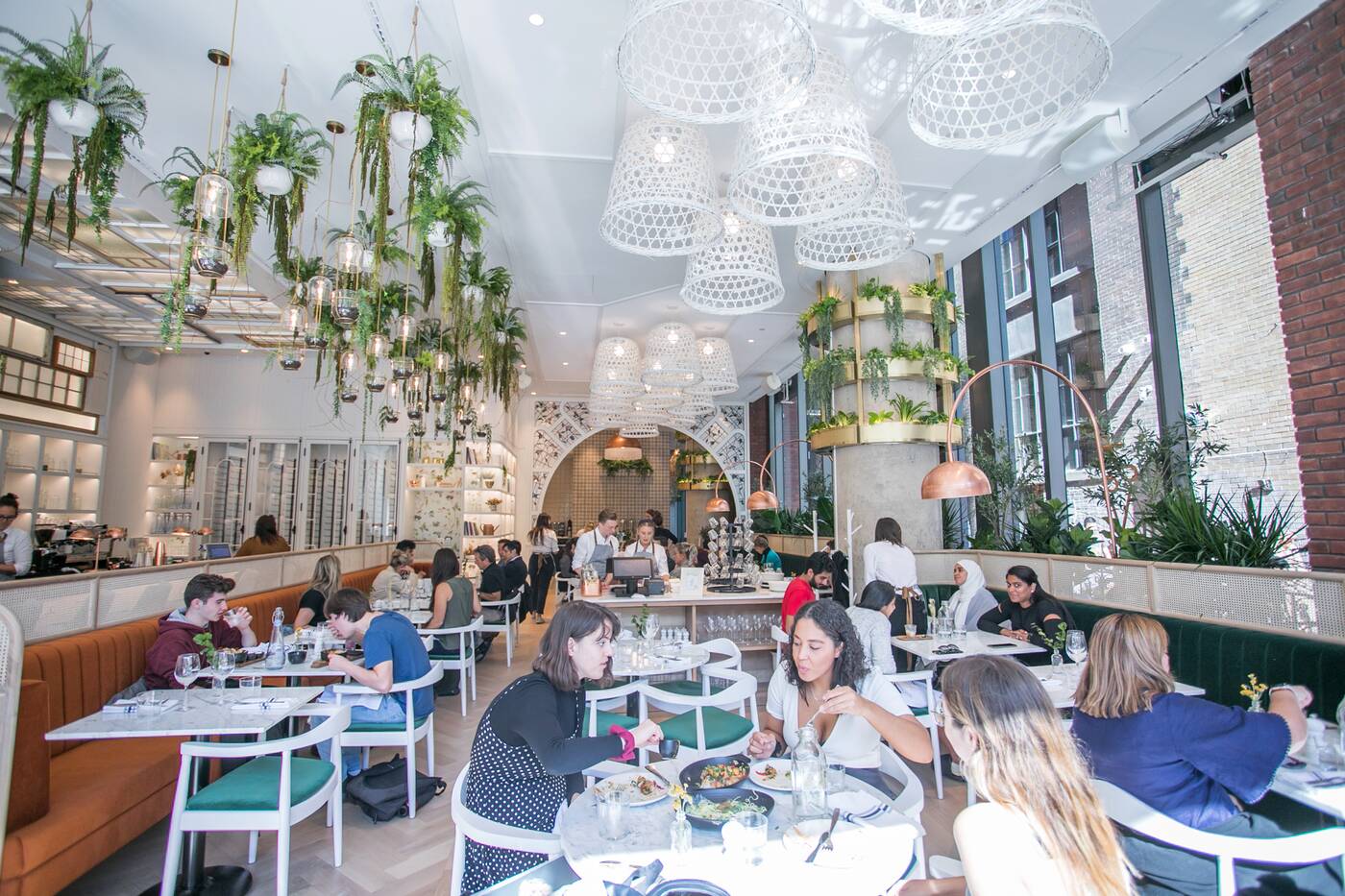 The vegetarian chain LOV has a Toronto outpost on King West. Photo by Hector Vasquez.

Indian cuisine features some of the most amazing vegetarian dishes around, so naturally Udupi Palace is one of the most delectable options on this list. Their unreal dosas are totally worth eating in a basement for.

La Bartola proves you can gorge on Mexican eats without the pibil or suadero. Don't miss out on the sikil pak, a traditional Mayan toasted pumpkin seed dip, or tacos topped with braised hibiscus flowers.

The U.S.-based vegan chain by CHLOE. made its Canadian foray with a store in Yorkdale, where you can order one of their popular Guac Burgers or tempeh- and lentil-filled Maple Bacon Cheeze Burger.

Vegwood is a vegan gem where everything on the menu (yes, everything) is $6.99. Simple and tasty meals include Jerk Unchicken Sandwiches and Tofu Ribs & Rice.

Several days out of the week, the Malaysian restaurant and bar Soos hosts Fat Choi: a plant-based pop-up that's been serving up eats like Balinese Satay Lilit and Char Kway Teow since 2018. 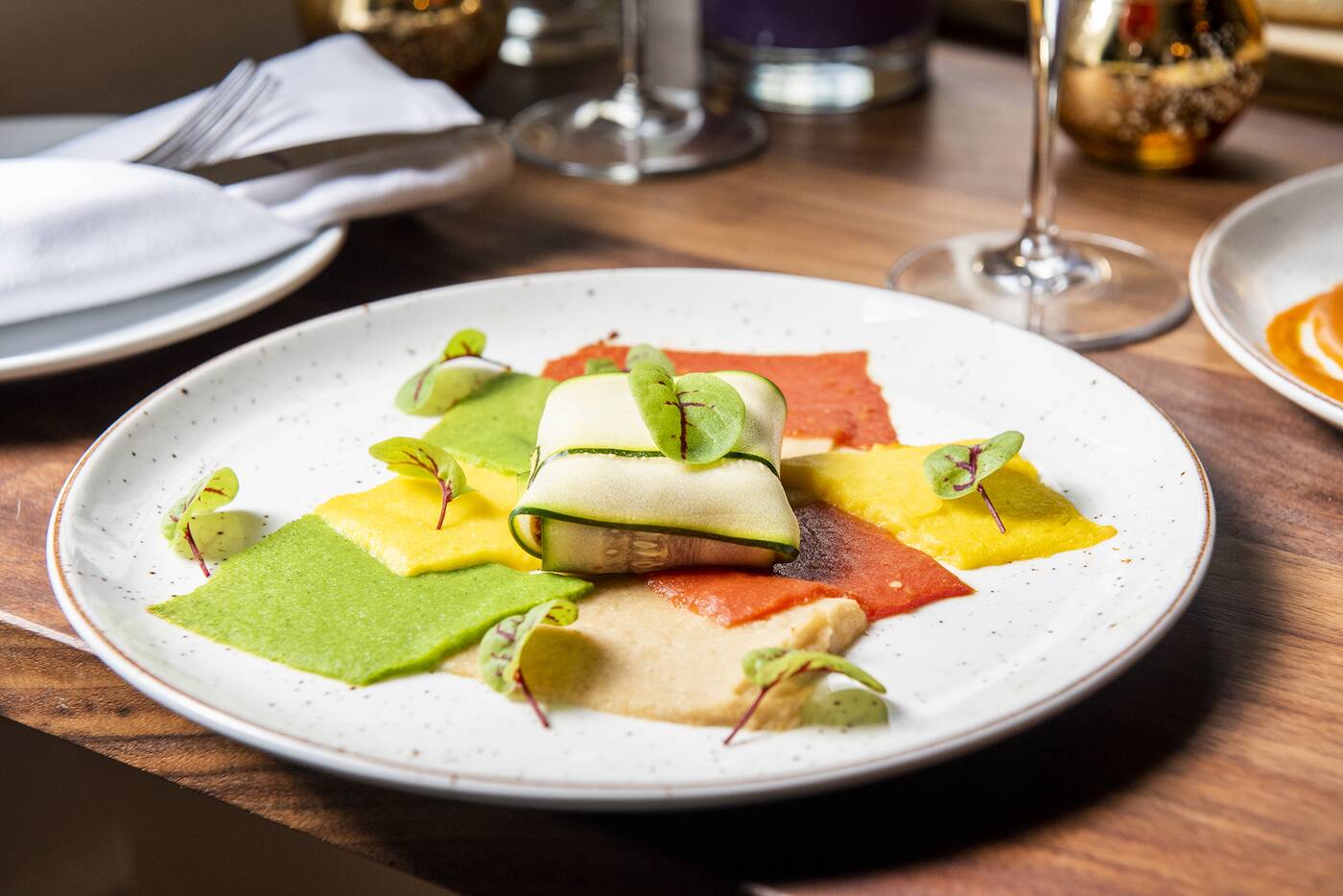 In case the name didn't give it away, Animal Liberation Kitchen is all about animal product-free menu. Their BBQ pulled jackfruit bun is a winner.

A tiny takeout window off St. Clair is home to Jack and Lil's: the South-African inspired catering company that, while not entirely vegan, offers some excellent meat-free options like crunchy vermicelli noodle bowls. 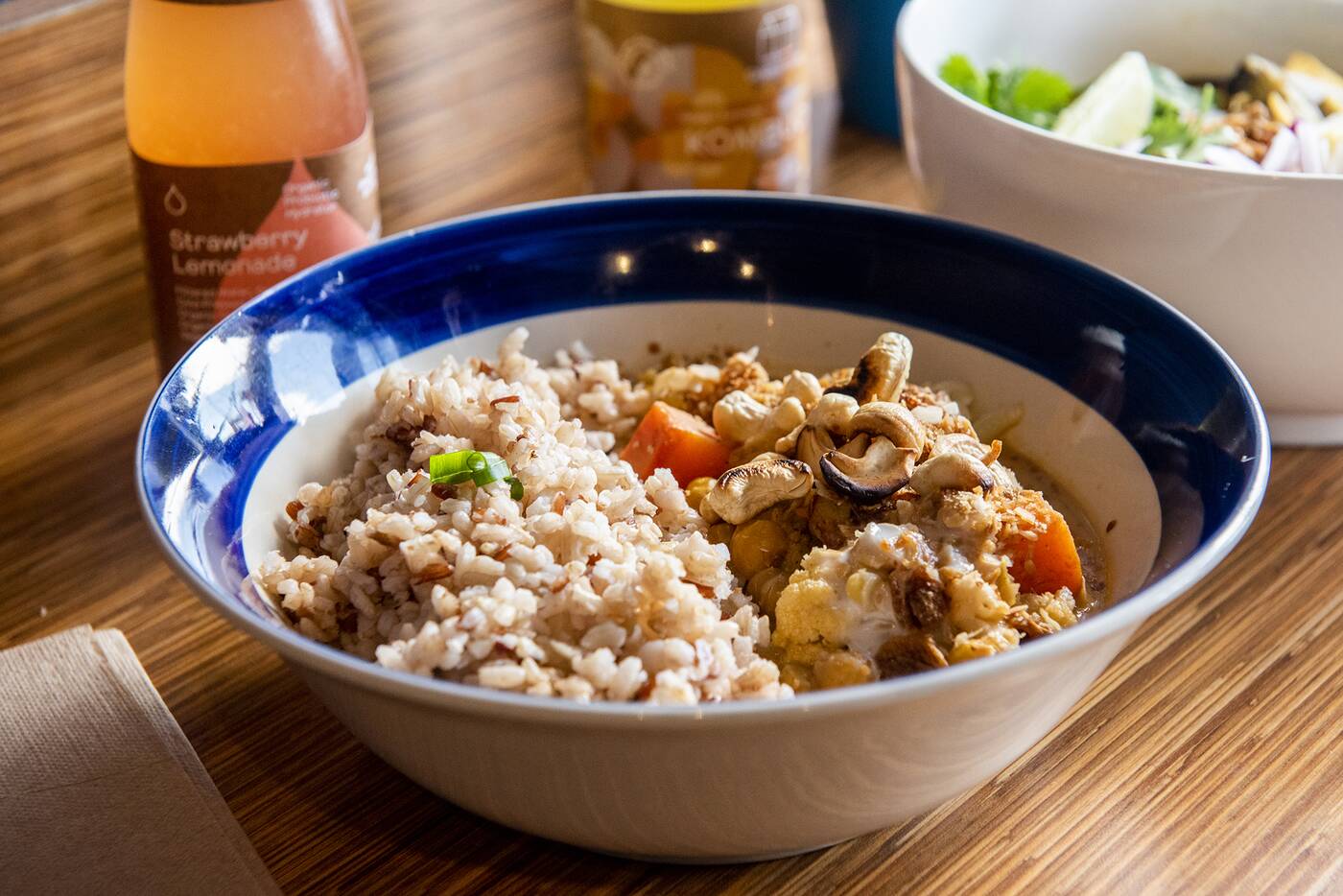 Jackfruit is the main meat substitute at the vegan Thai spot Mugi. Photo by Hector Vasquez.

From the makers of Kupfert and Kim comes the date-friendlier Hello 123, serving cocktails to go along with your avocado burger and pulled pineapple sliders.

Vegan island eats at V'S Caribbean Restaurant include soups, steamed okra and bammie, and mac pies off the main drag on Weston Road.

Sitting on the first floor of an historic home is Avelo, a tiny plant-based restaurant with five- and eight-course tasting menus of all things veggie.

Kupfert & Kim Bistro is the chic outpost of the vegan chain. Unlike the others, it's full-service, and licensed, so you can get caesars with hearty egg-free brunches and smoothie bowls.