by CHLOE. is a U.S.-based vegan fast-casual chain with its first ever location in Canada right here in Toronto.

Most locations are in New York, where the brand originated, but there are now also locations in Los Angeles, Boston and London. 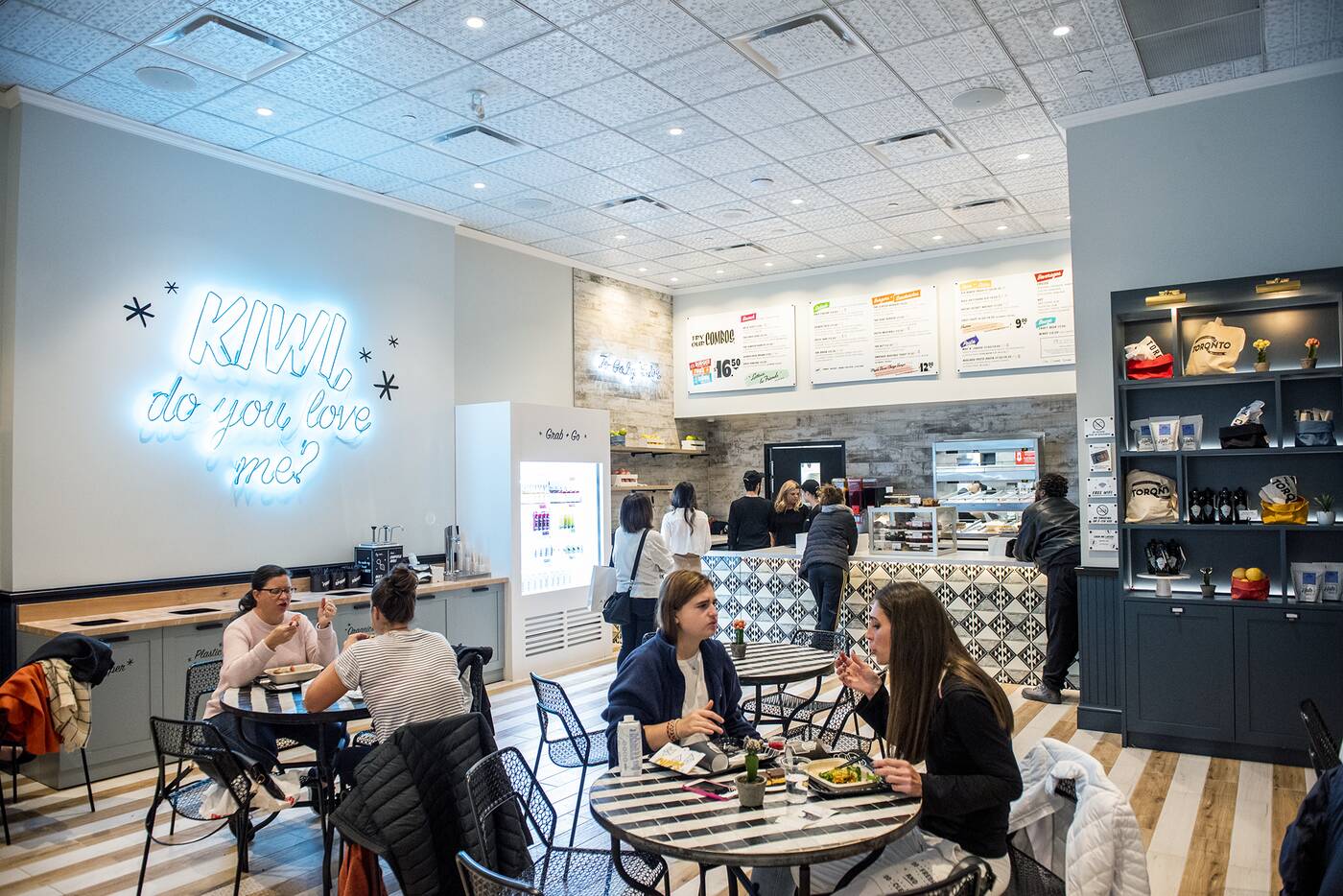 This Toronto outpost transplants the look of the flagship NYC by CHLOE. into a mall, the black-and-white facade complete with a striped awning. 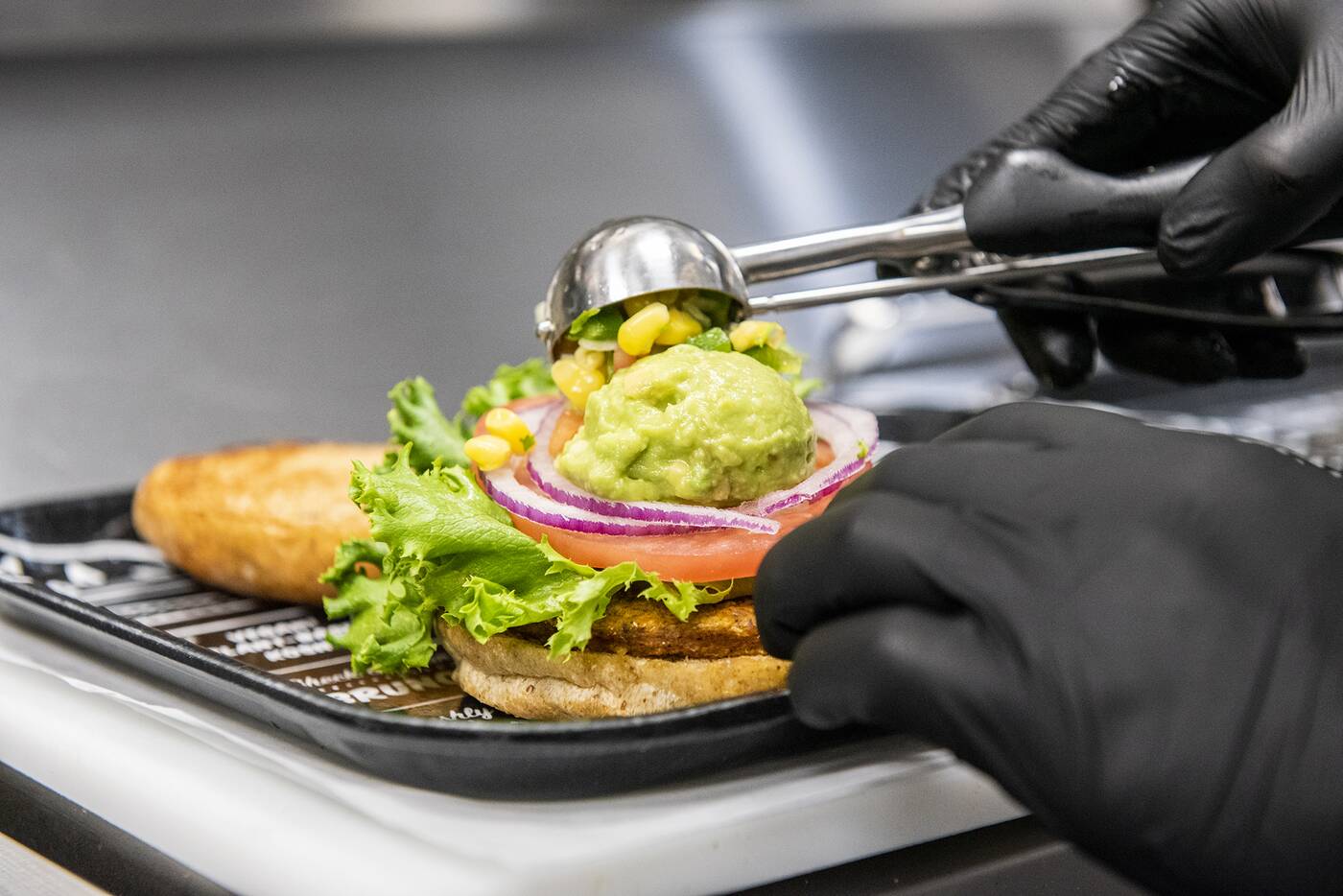 The Guac Burger ($11) is one of the most popular and it's easy to see why, a fiery chipotle aioli dripping tantalizingly. 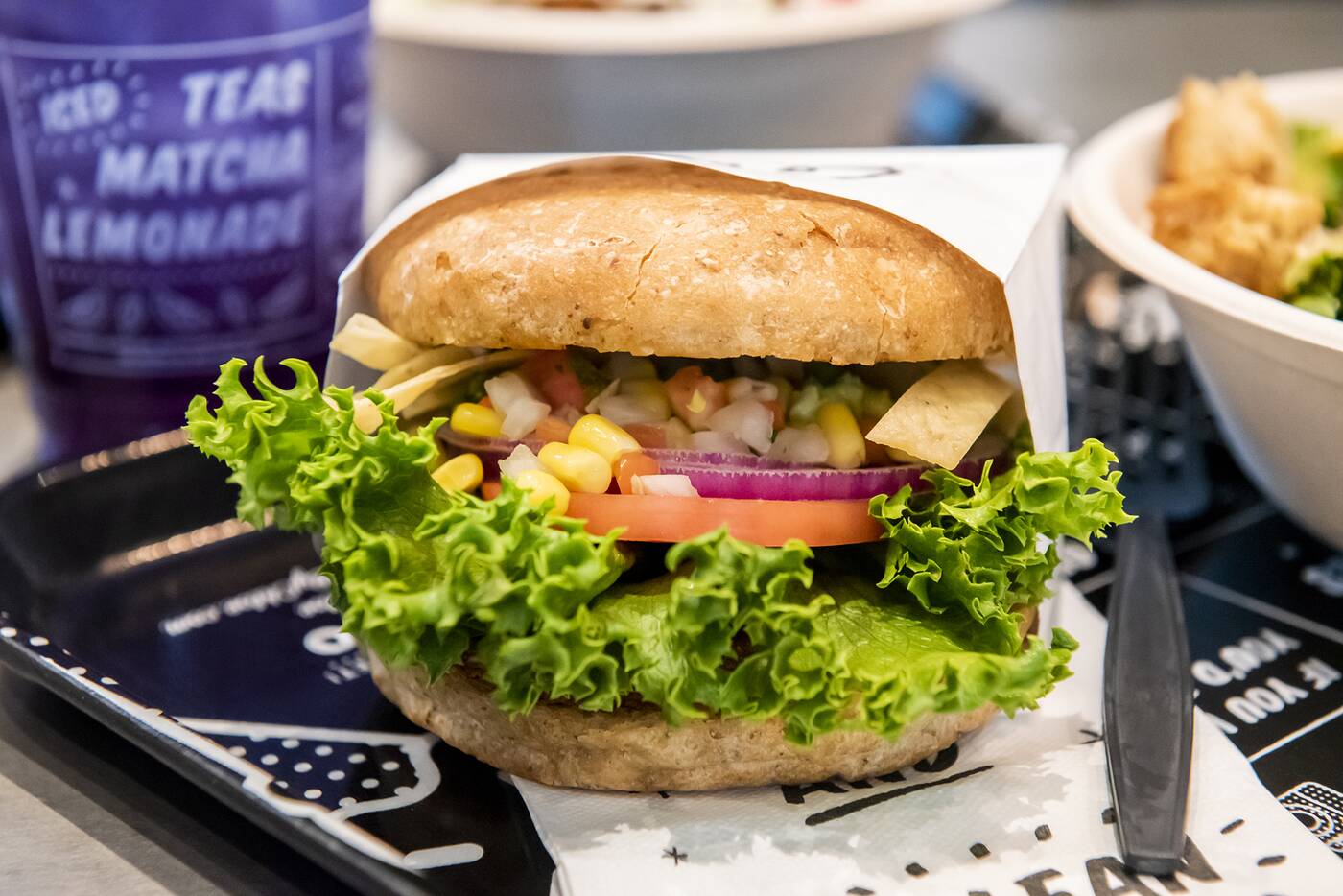 A black bean, quinoa and sweet potato patty on a whole grain bun is a little dry and starchy, but is helped out greatly by lots of fatty guac, corn salsa, lettuce, onion, tomato and crunchy tortilla strips. 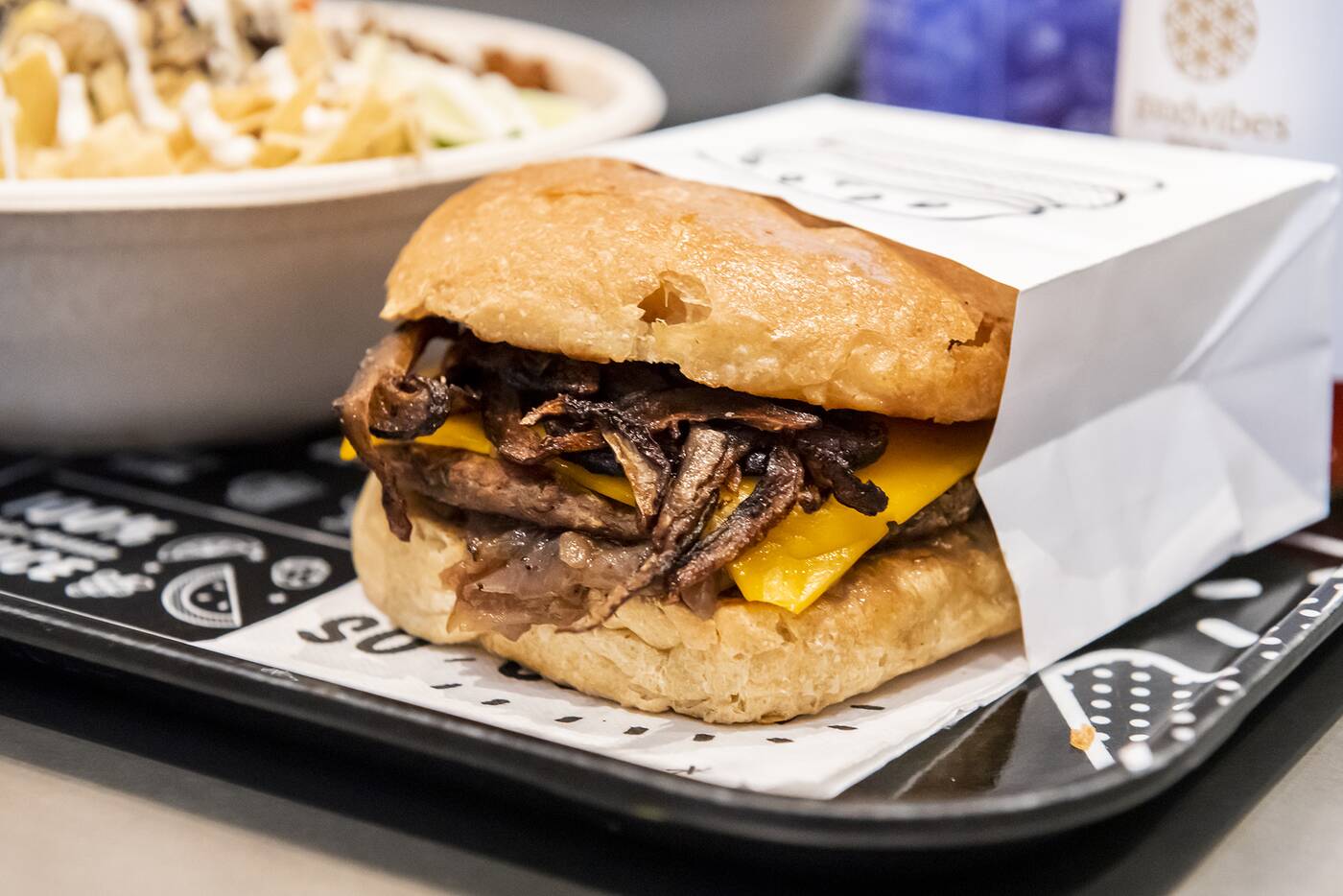 A Maple Bacon Cheeze Burger ($12) is exclusive to Toronto, a tempeh, lentil, chia and walnut patty topped with cheddar cheeze, shiitake bacon, and a special sauce on a potato bun. I like the idea but I was looking for more smoky flavour, cheesiness and sauciness. 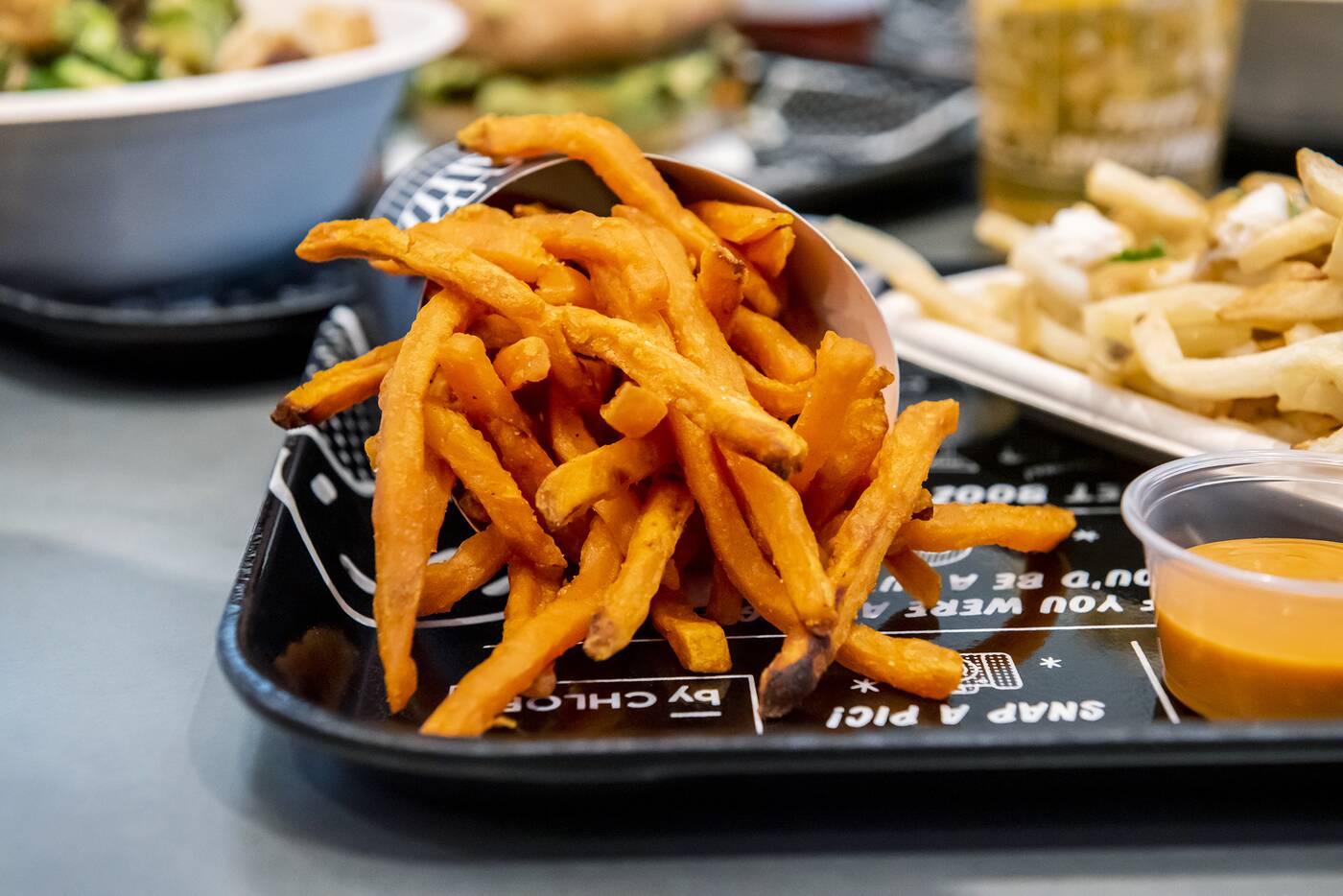 Gluten-free, air-baked fries start at $5.50 for either original or sweet potato, cut into a classic matchstick shape. They go great with the chipotle aioli or a beet ketchup that's surprisingly similar to regular old tomato. 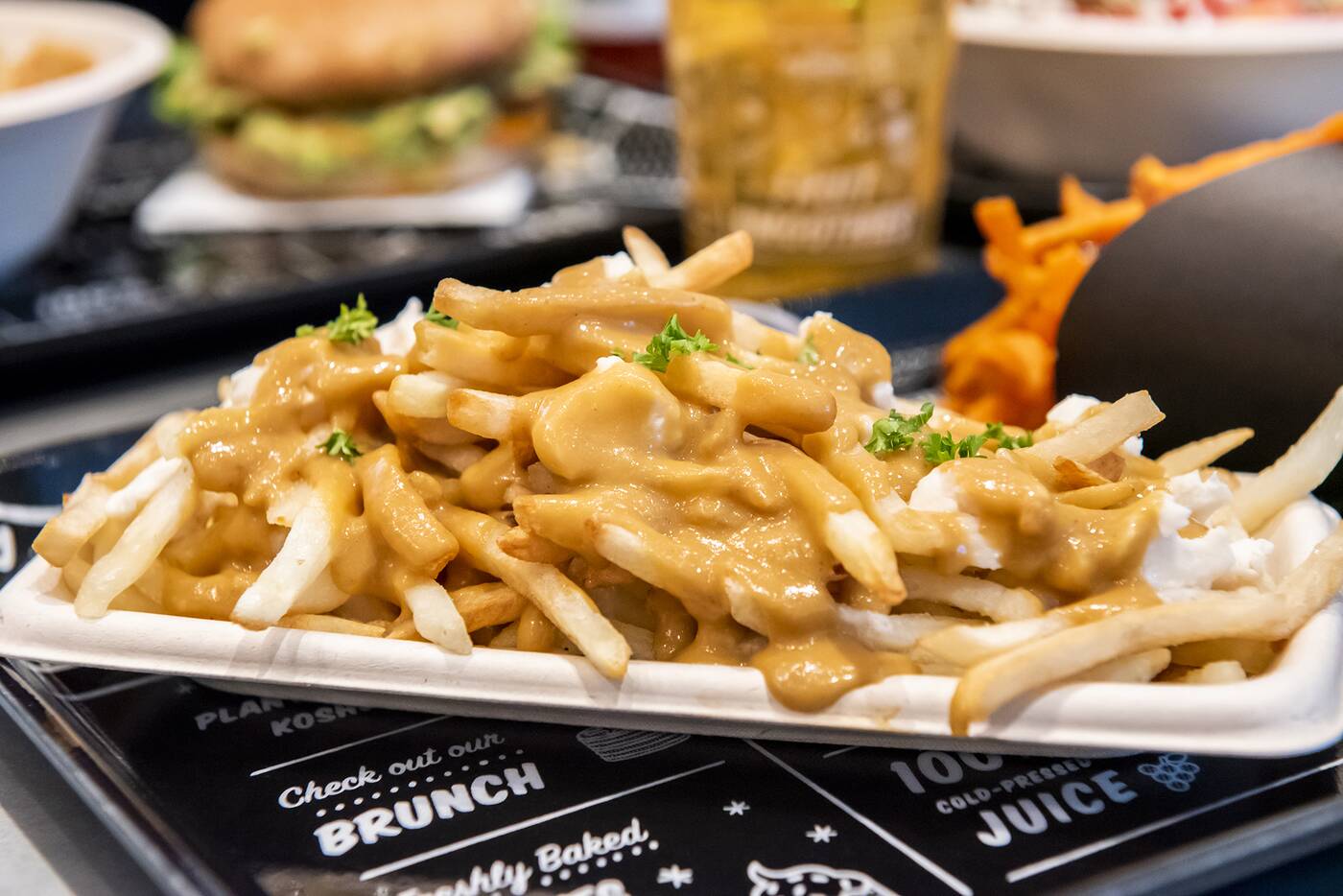 Poutine ($9) is also exclusive to Toronto, your choice of fries topped with cheeze curds that aren't melty but very creamy, and a yummy secret veggie-based golden gravy with nostalgic notes of sage and thyme. 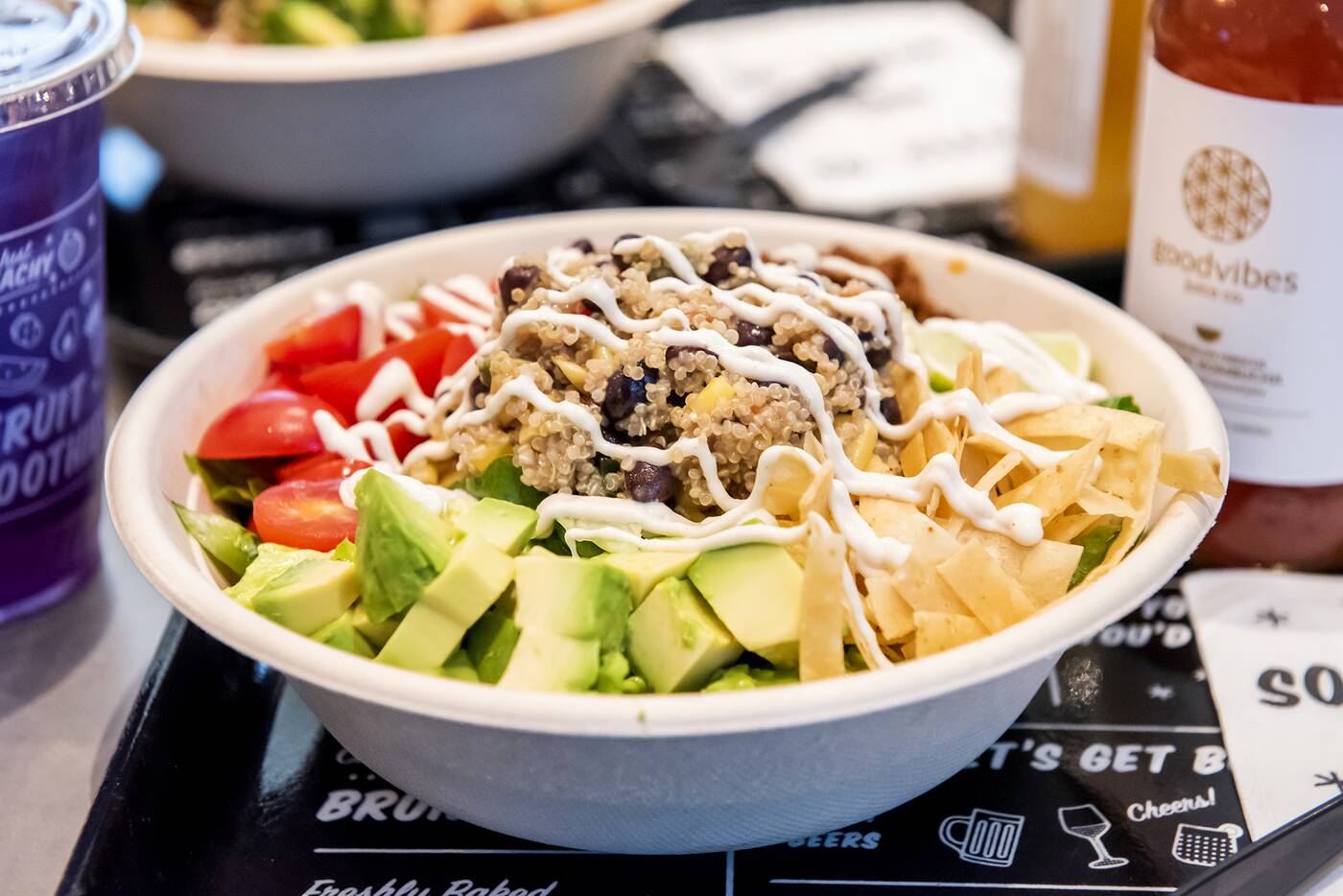 A Quinoa Taco Salad ($15) gets much of its flavour from a zinging spicy seitan chorizo, presented on top of chopped romaine along with quinoa, black beans, corn, avocado, tomato, tortilla strips, a tofu crema and an agave-lime vinaigrette. 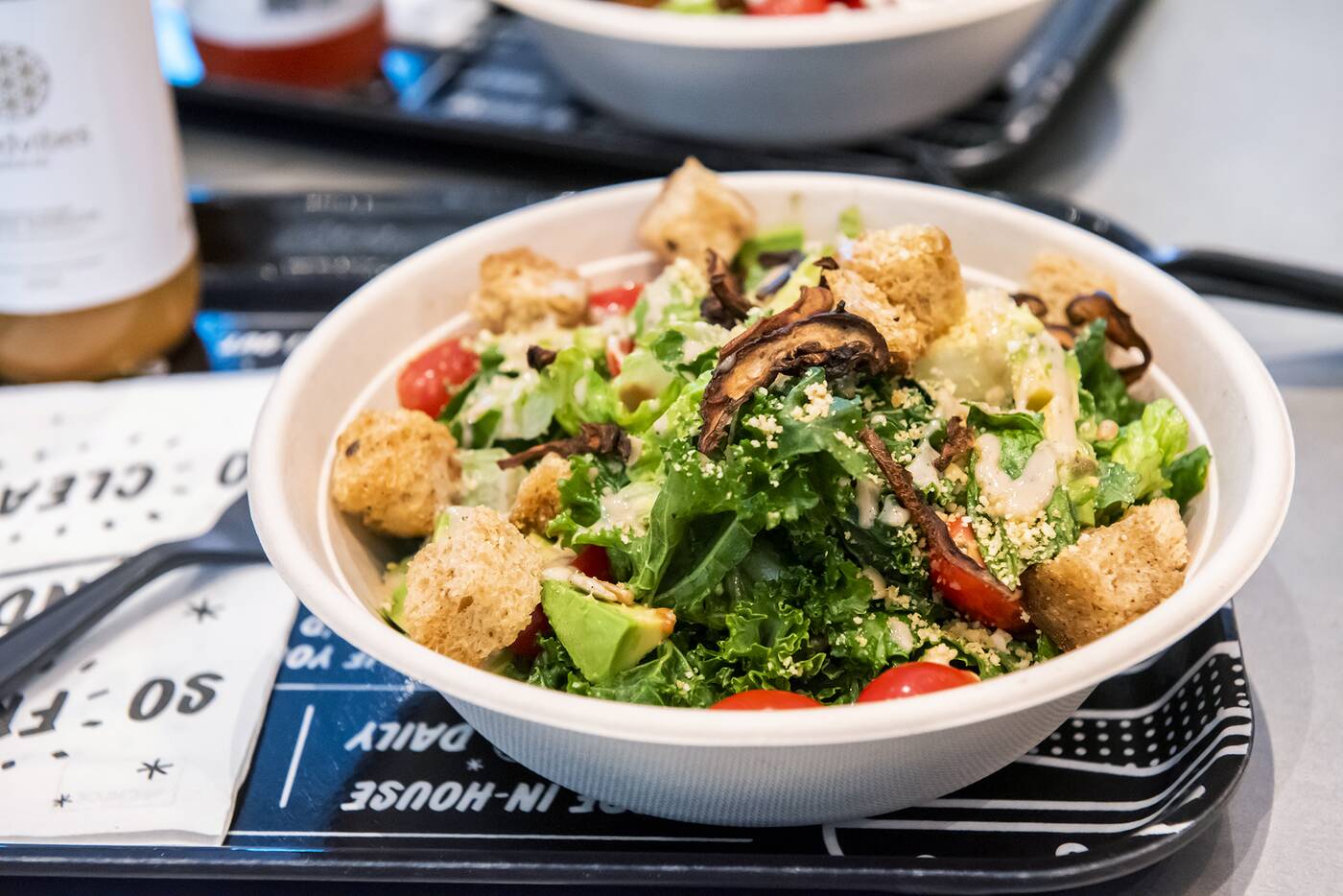 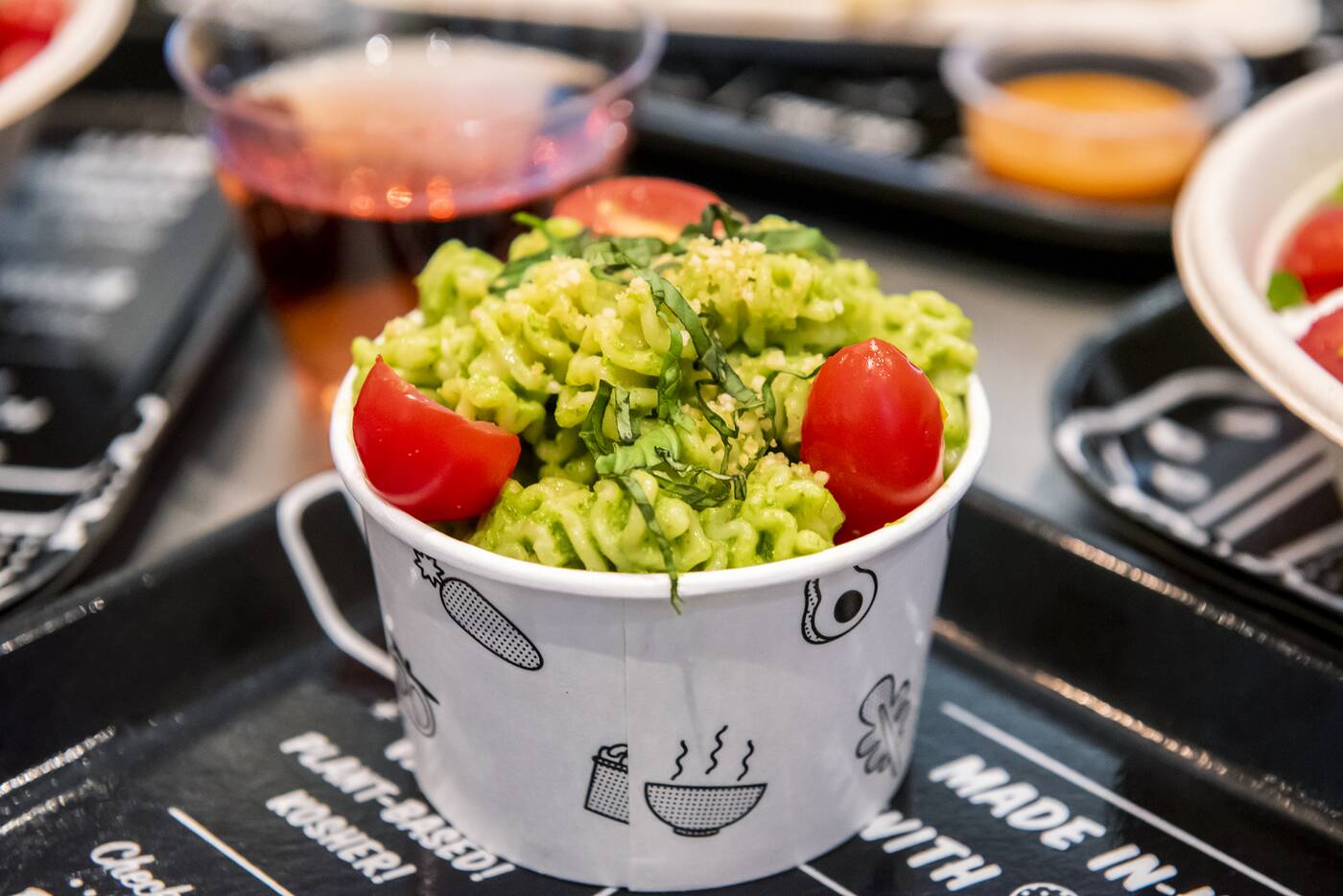 Avocado Pesto Pasta (starting at $7.50) has an avocado-cashew pesto and an almond parm that both successfully leave me not missing cheese, a few grape tomatoes providing a complementary pop of freshness. 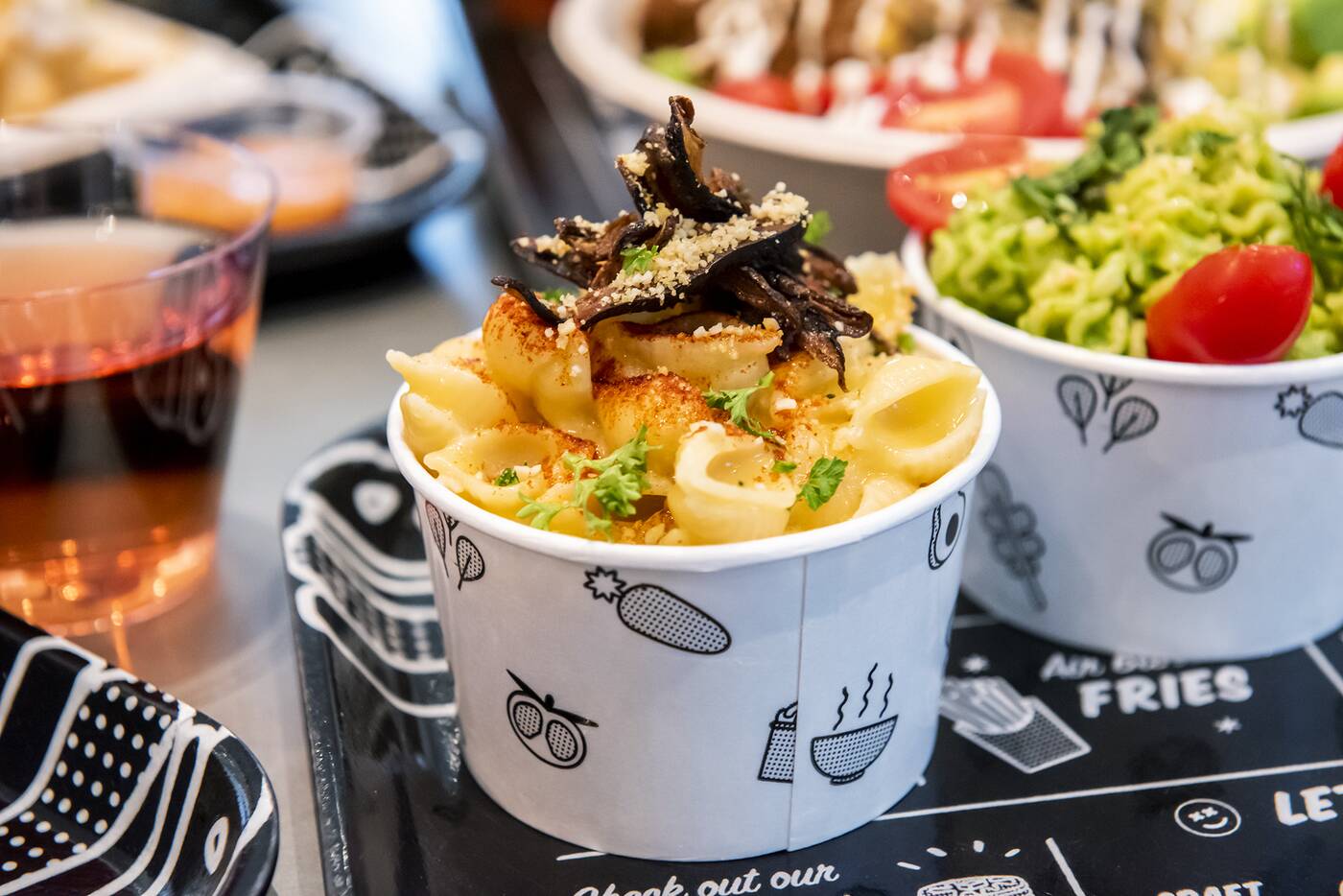 Mac n' cheese (starting at $7) burns my mouth instantly after hastily digging in, so be warned. A sweet potato cashew cheese sauce is a little thin, but flavourful, especially amped up by almond parm and crispy shiitake bacon 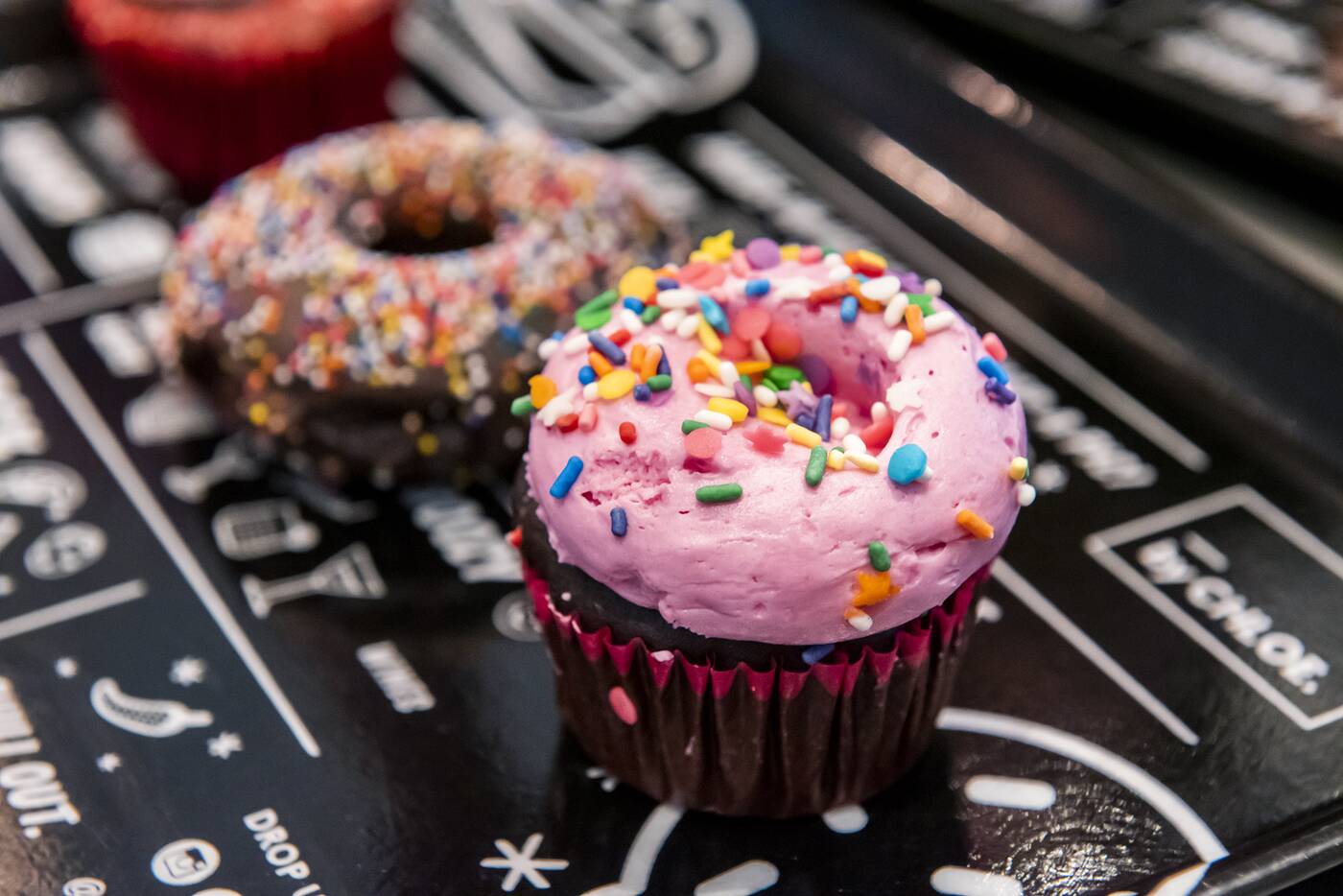 House baked goods for dessert include chocolate and red velvet cupcakes ($4.75) made with coconut milk. 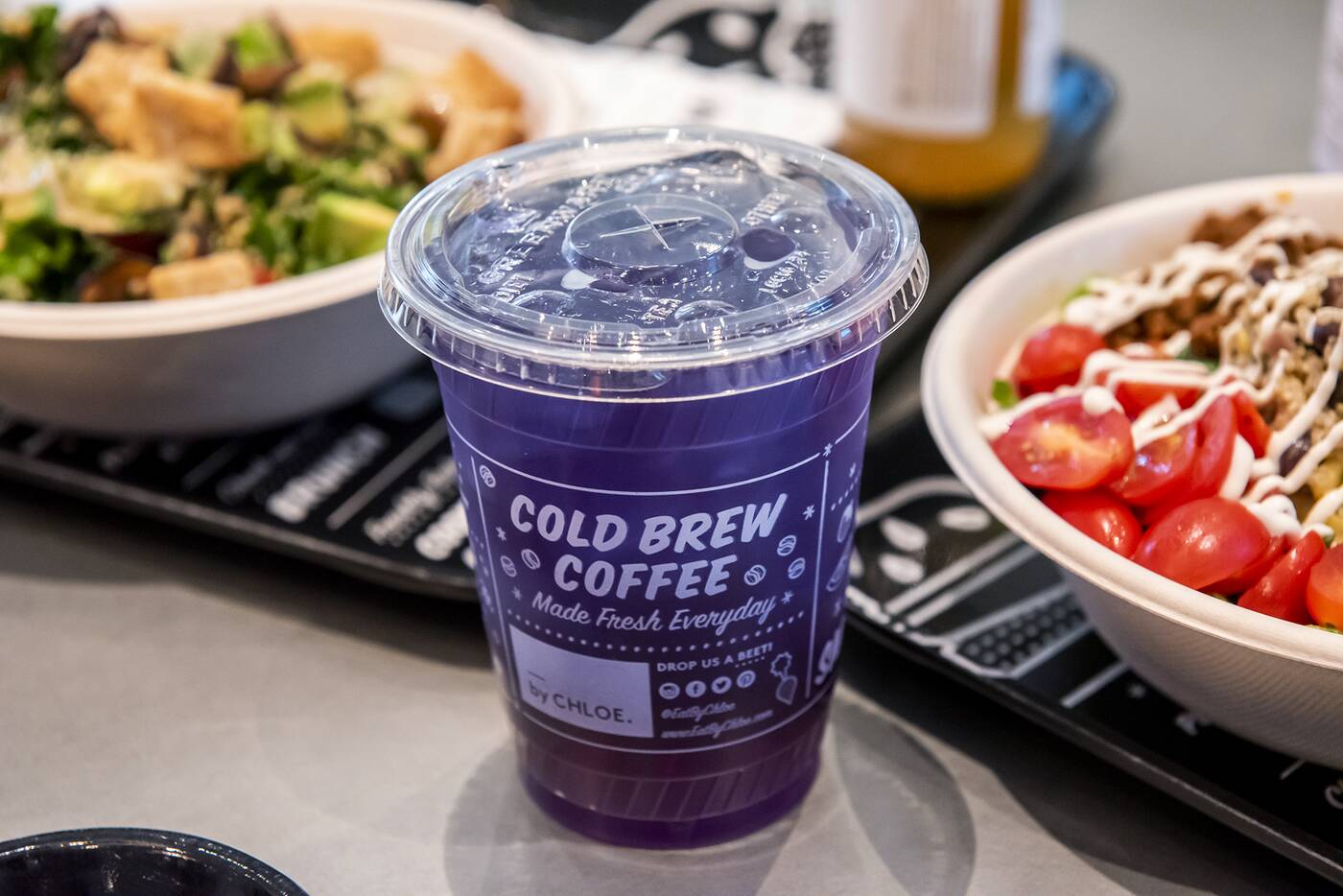 Blue verbena iced tea is provided by local Pluck, a refreshing twist on iced tea with lots of floral notes. 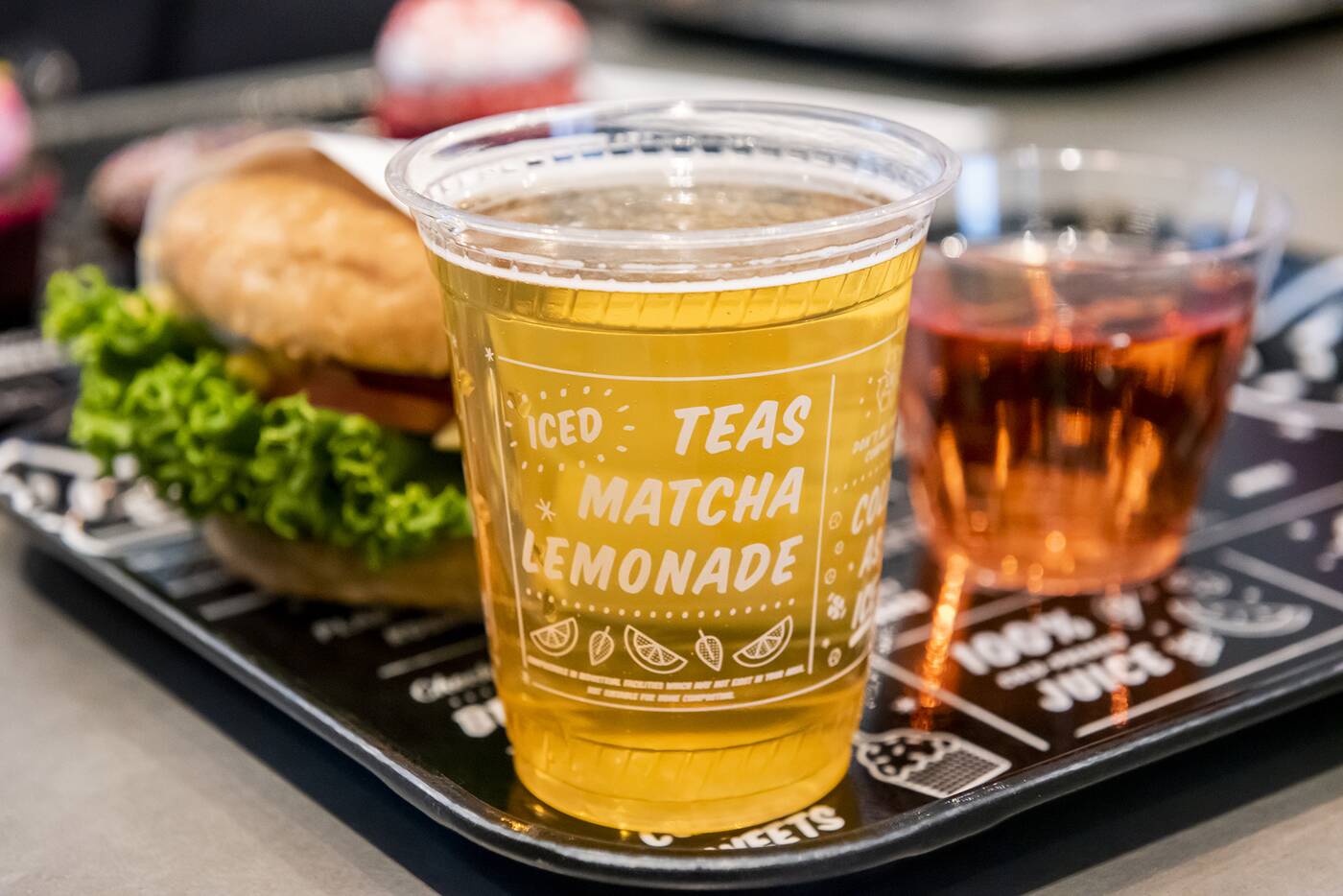 A local sensibility extends to serving Ace Hill pilsner and Tawse rose in this licensed environment. 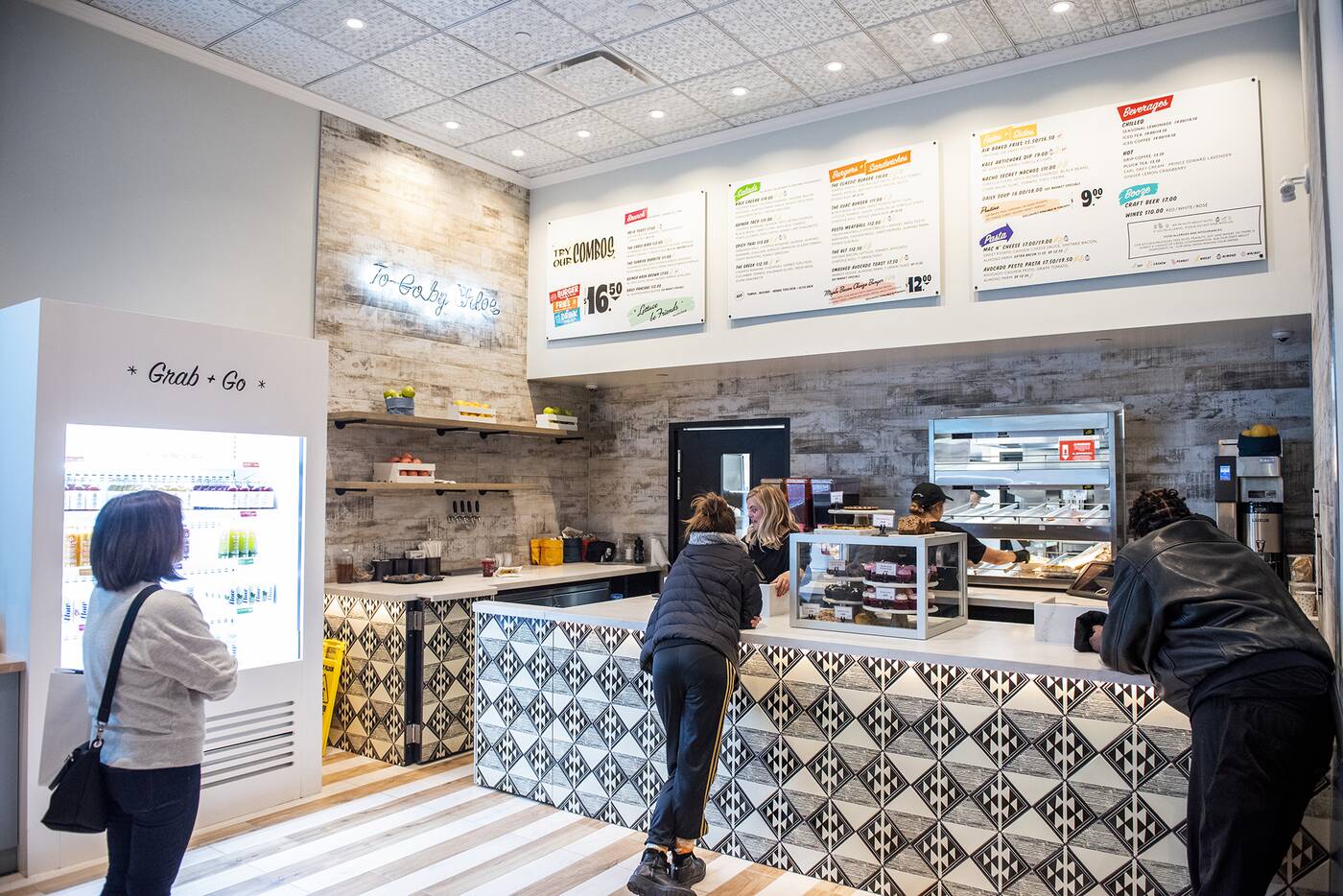 Symbols on the menu identify allergens clearly, and almost anything here can be made gluten-free. 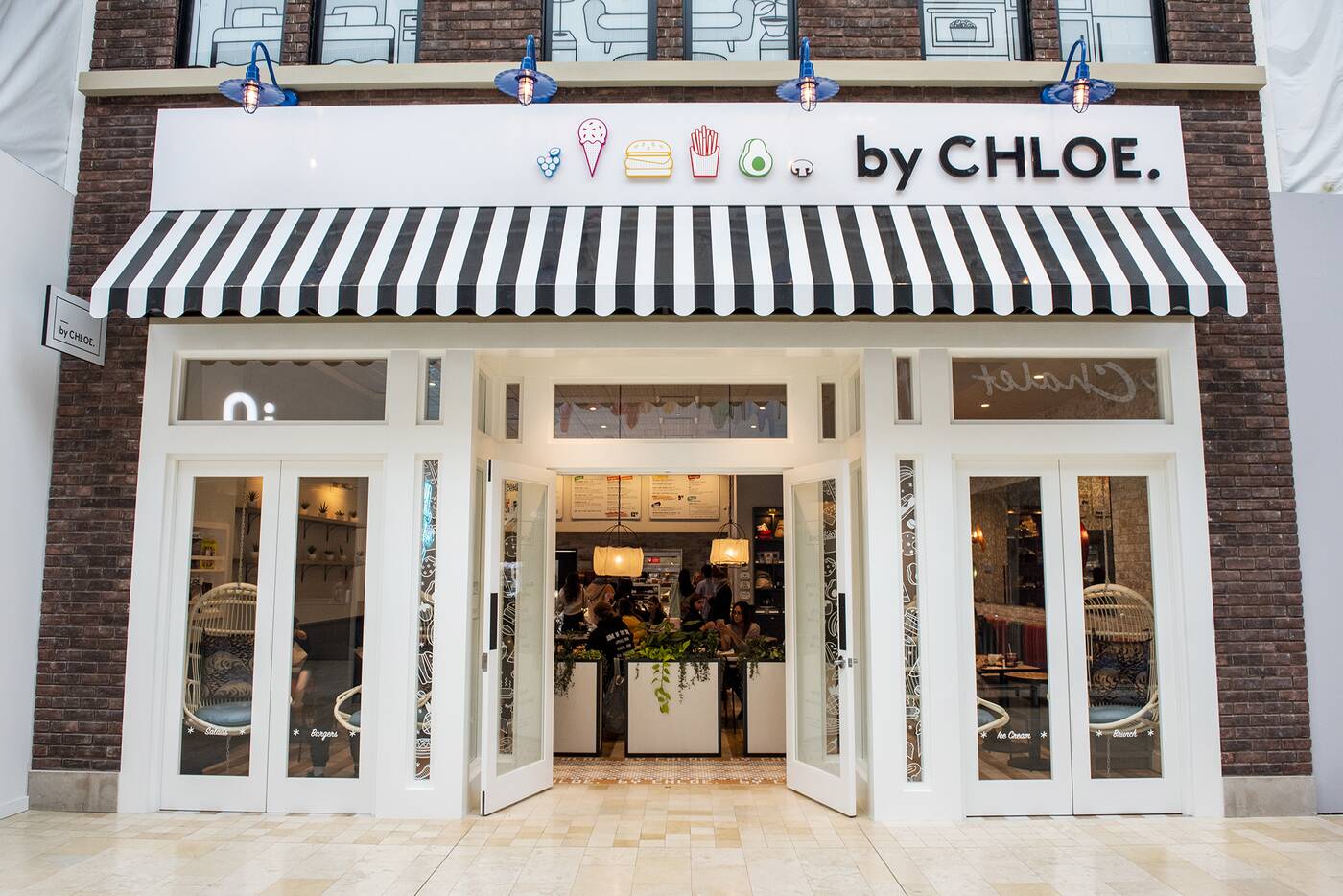