Globally Local is a totally vegan fast food concept born out of nearby London, Ontario.

Previous to opening this spot, the chain opened two locations in London, and more are always opening in places like Windsor and other small Ontario cities. 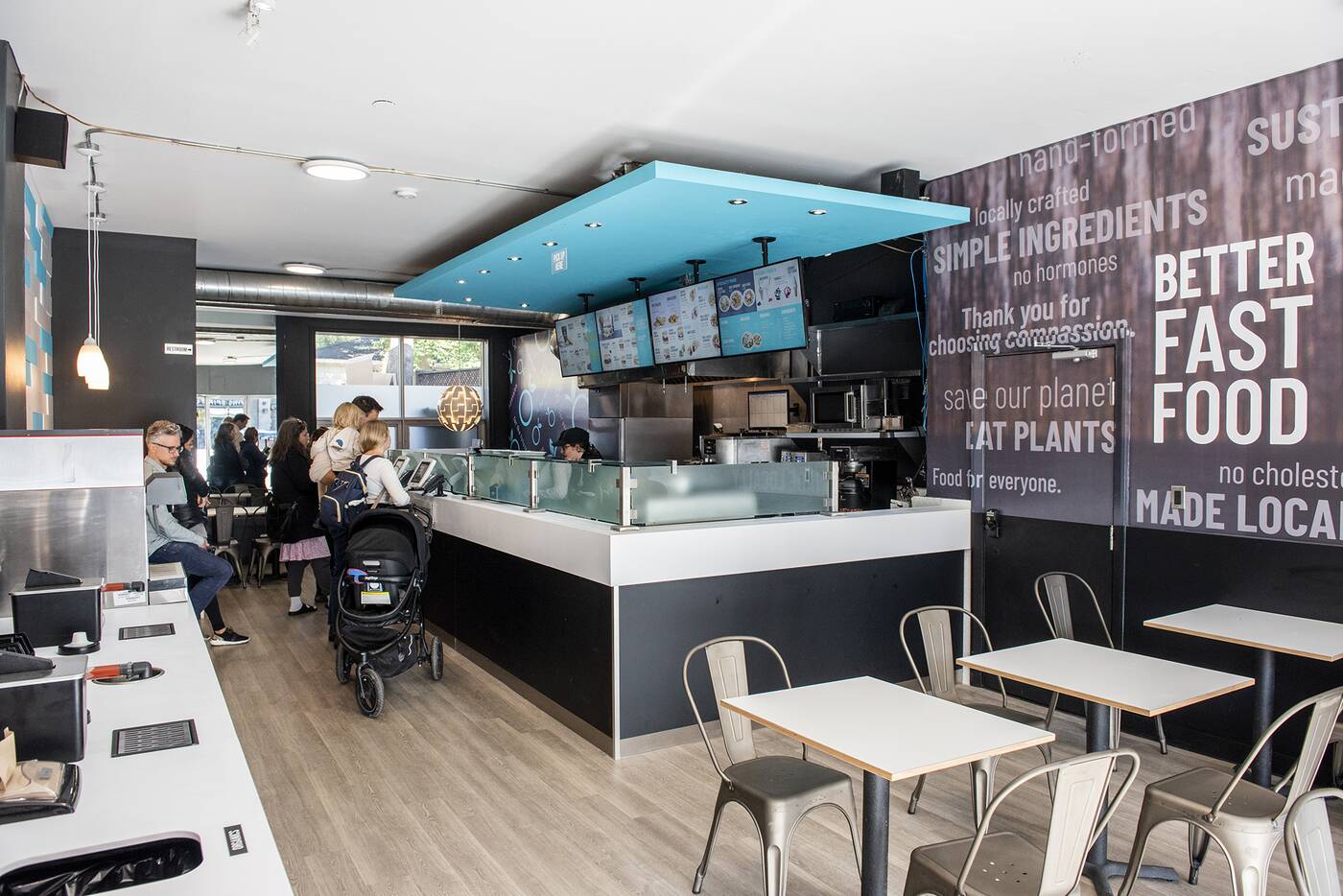 All transactions are actually done at self checkout stations, allowing for total customization of any products, just like fast food chain kiosks. 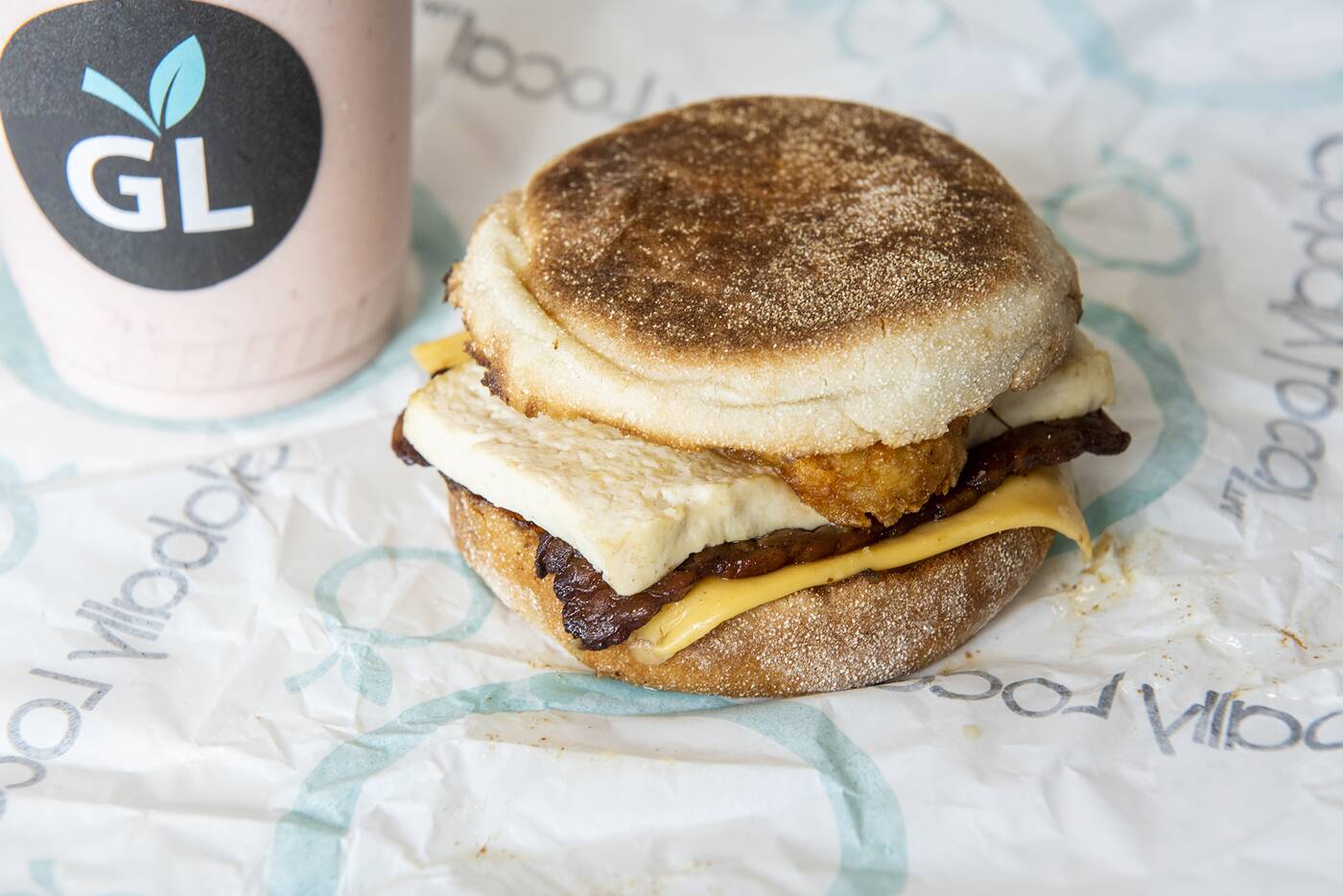 A BacUN Maple Crunch ($4.99) is part of an all-day breakfast menu, just one of many ways Globally Local embraces corporate concepts to highlight their products. 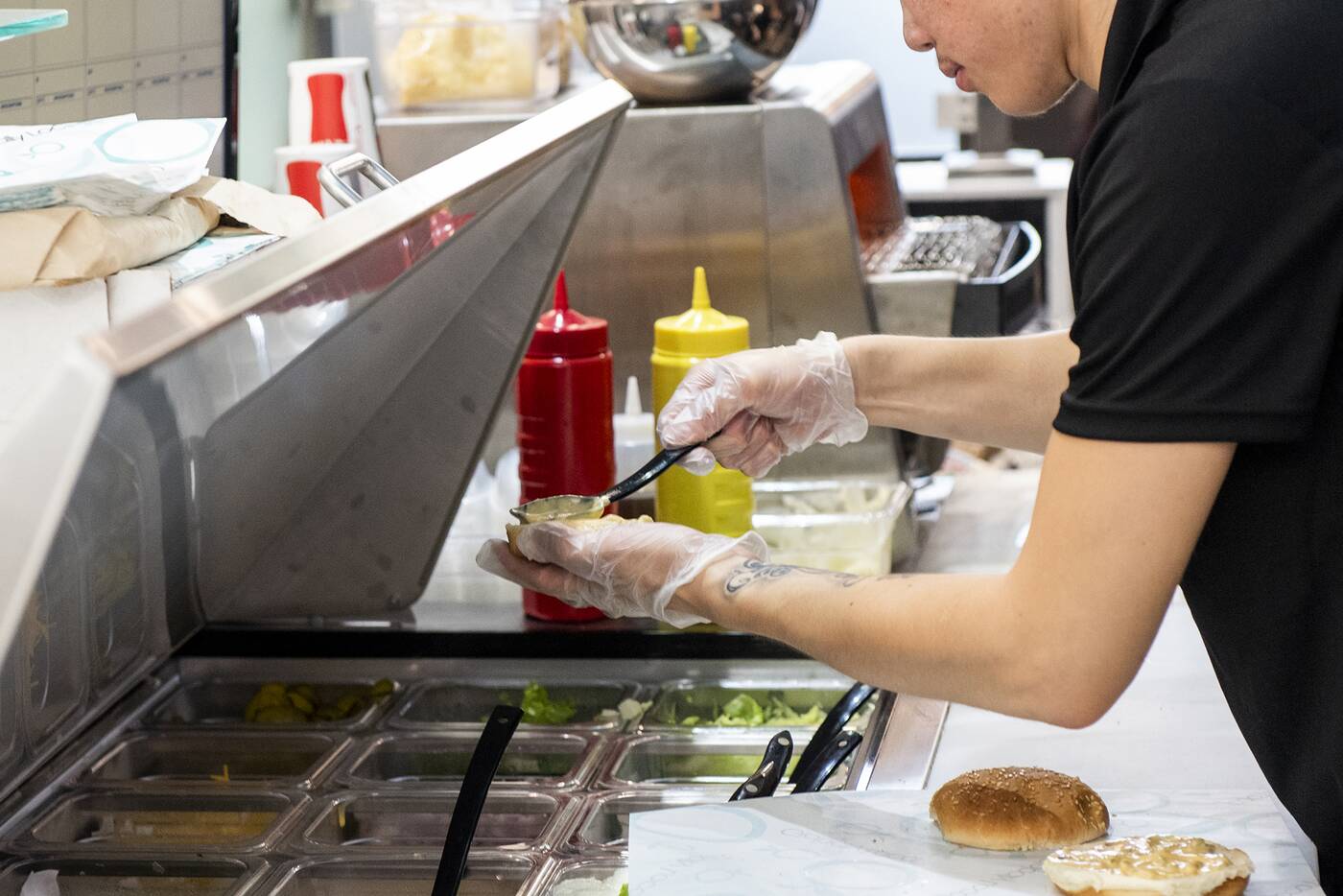 All the ingredients in every single item can be found clearly spelled out on Globally Local's website. Something that sets them apart from other vegan restaurants and chains is that they make all their own food substitutes out of whole foods, without using protein isolates.

The breakfast sandwich is definitely a star on the menu: maple syrup and hash browns play well with vegan cuisine, and that fake bacon tastes super fatty and smoky. 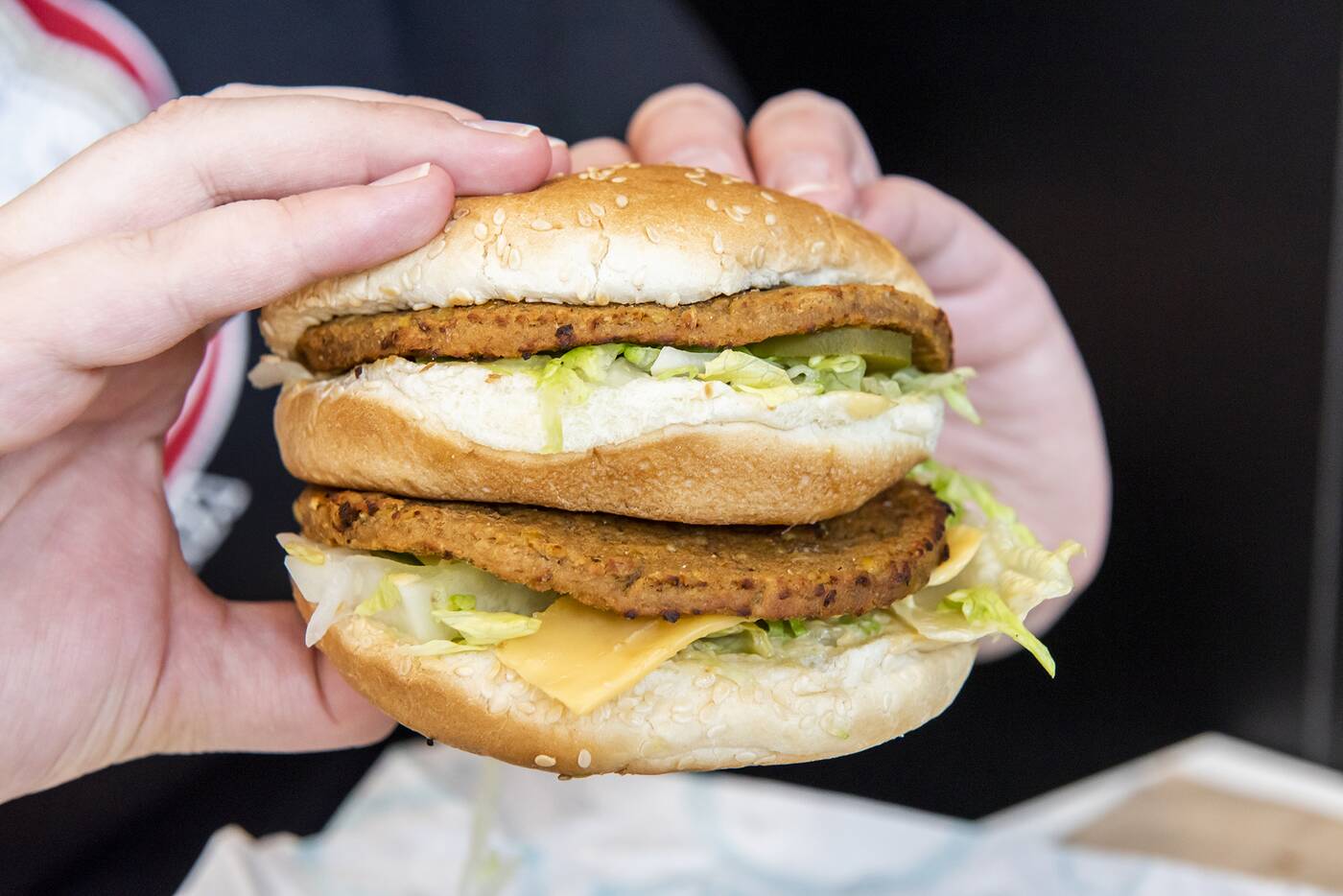 The Famous Burger ($6.99) is another, a Big Mac style burger with a toasted triple bun and two house chickpea patties.

It falls apart about as sloppily as a Big Mac would, and Famous sauce, pickles, cheese slices and shredded lettuce successfully imitate the McDonald's sandwich. However, I like that the patties actually taste like chickpeas and aren't trying too hard to seem like meat. 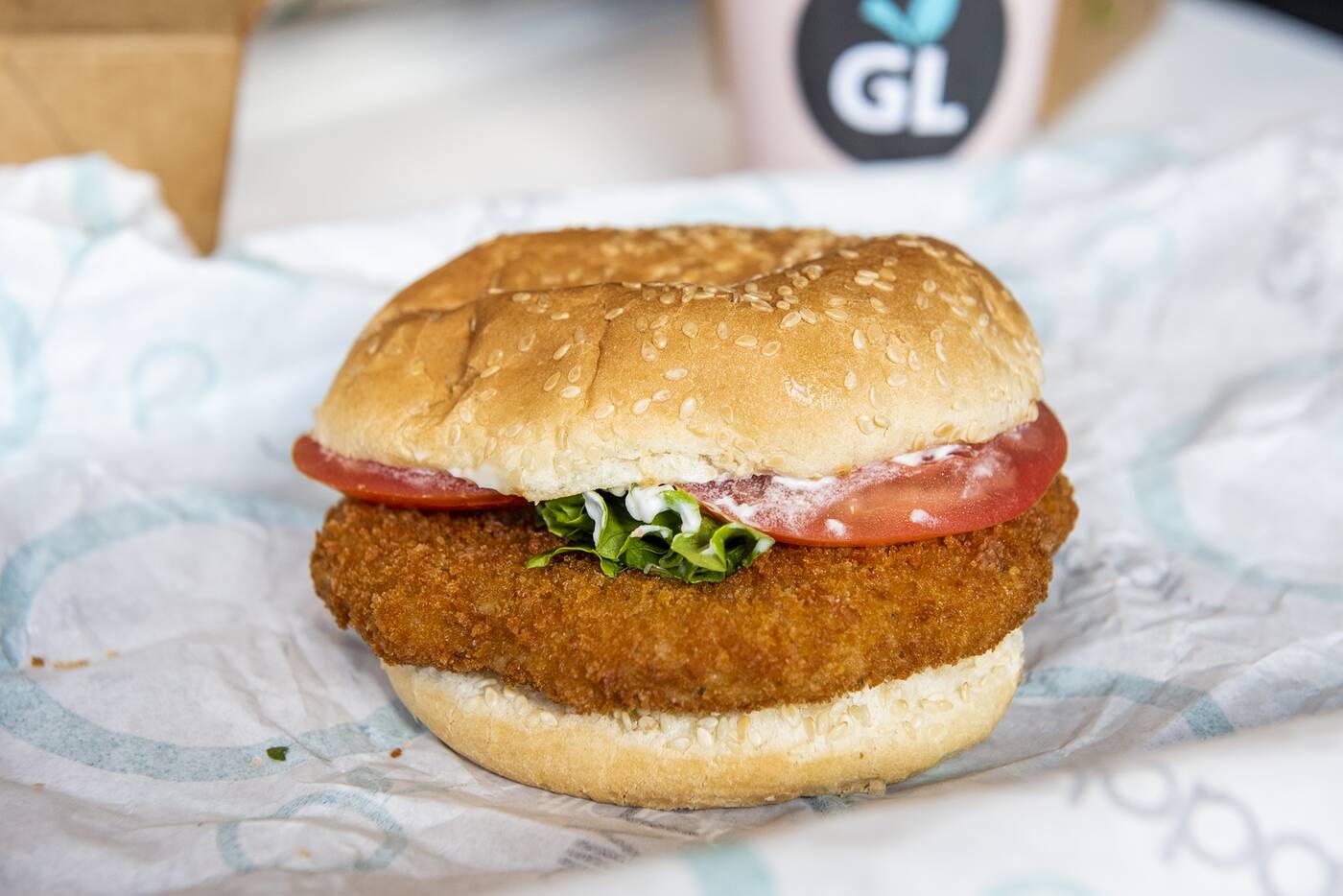 I'm not as in love with a Crispy ChickUN sandwich ($6.99), though the texture of chickUN made from scratch out of wheat protein with some oat and chickpea protein is successful. It's just rather simple on a toasted sesame bun with vegan mayo, tomato and lettuce. 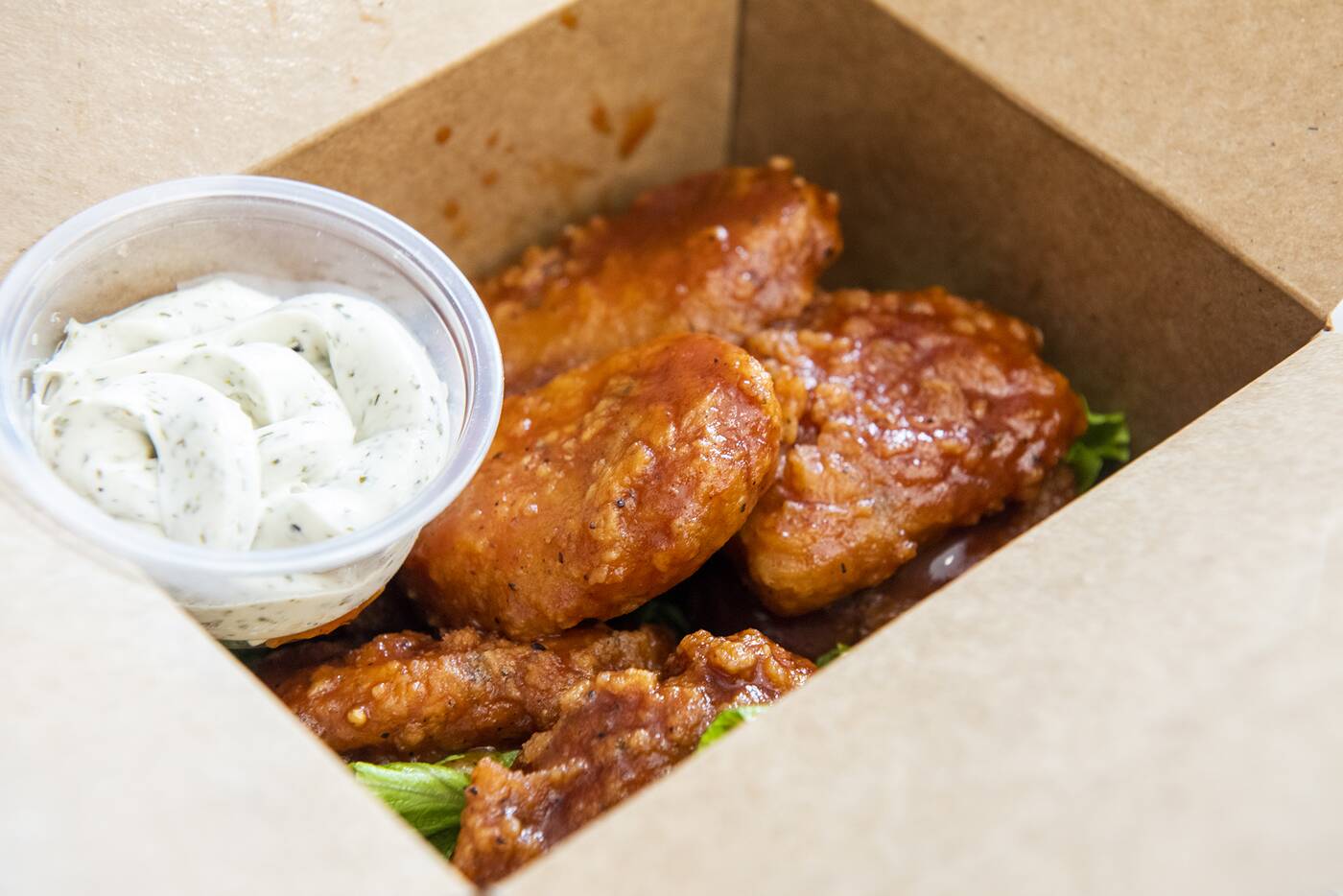 I prefer an order of Wingalings ($7.99), probably because they're doused in a sticky, smoky BBQ sauce. The crunch and texture of wings works well with it, and vegan ranch on the side only ups the flavour quotient. Forks are recommended, or else prepare to get messy. 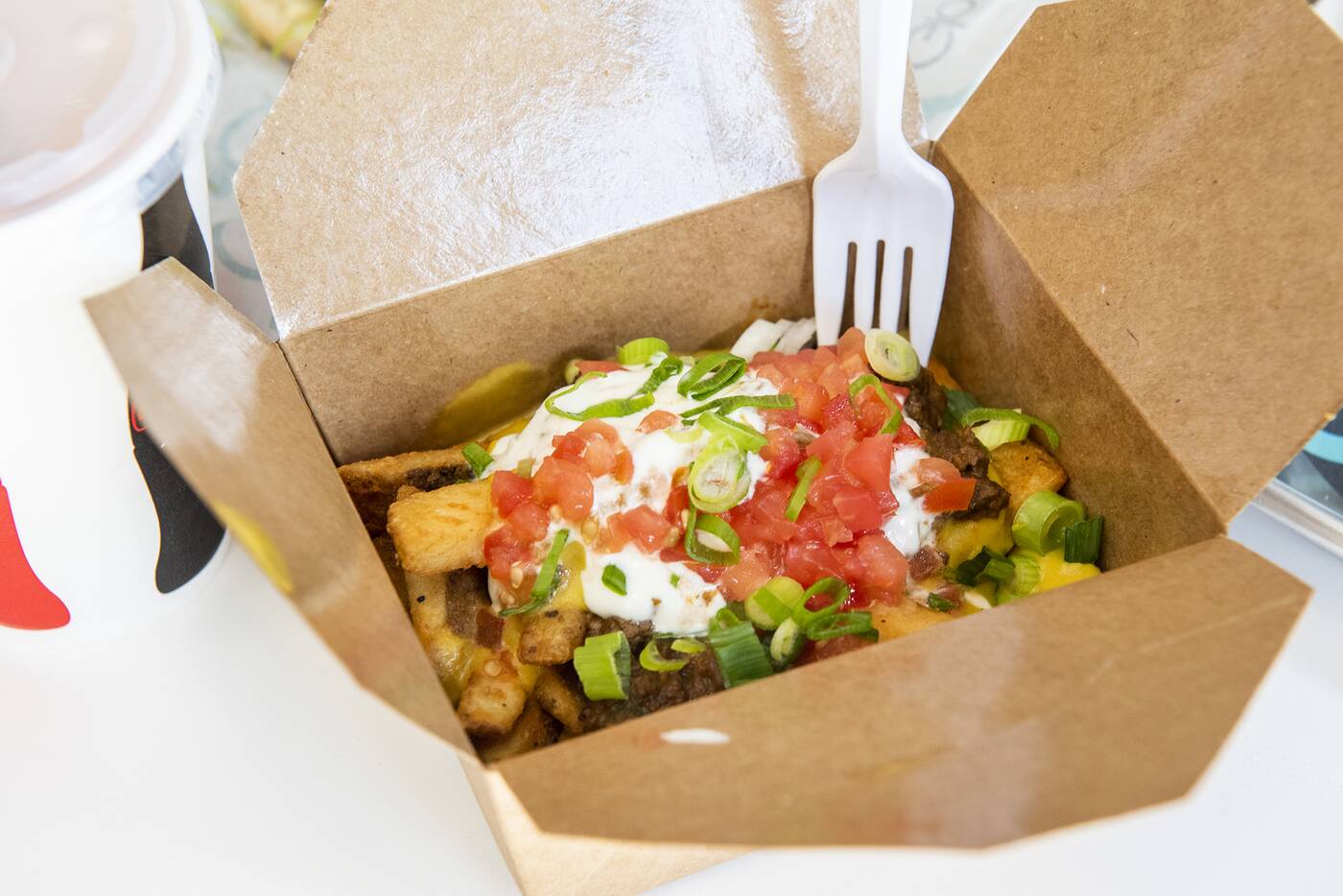 Fries Supremacy ($5.99) is one of many sides, including mac n' cheese, hash browns and onion rings. 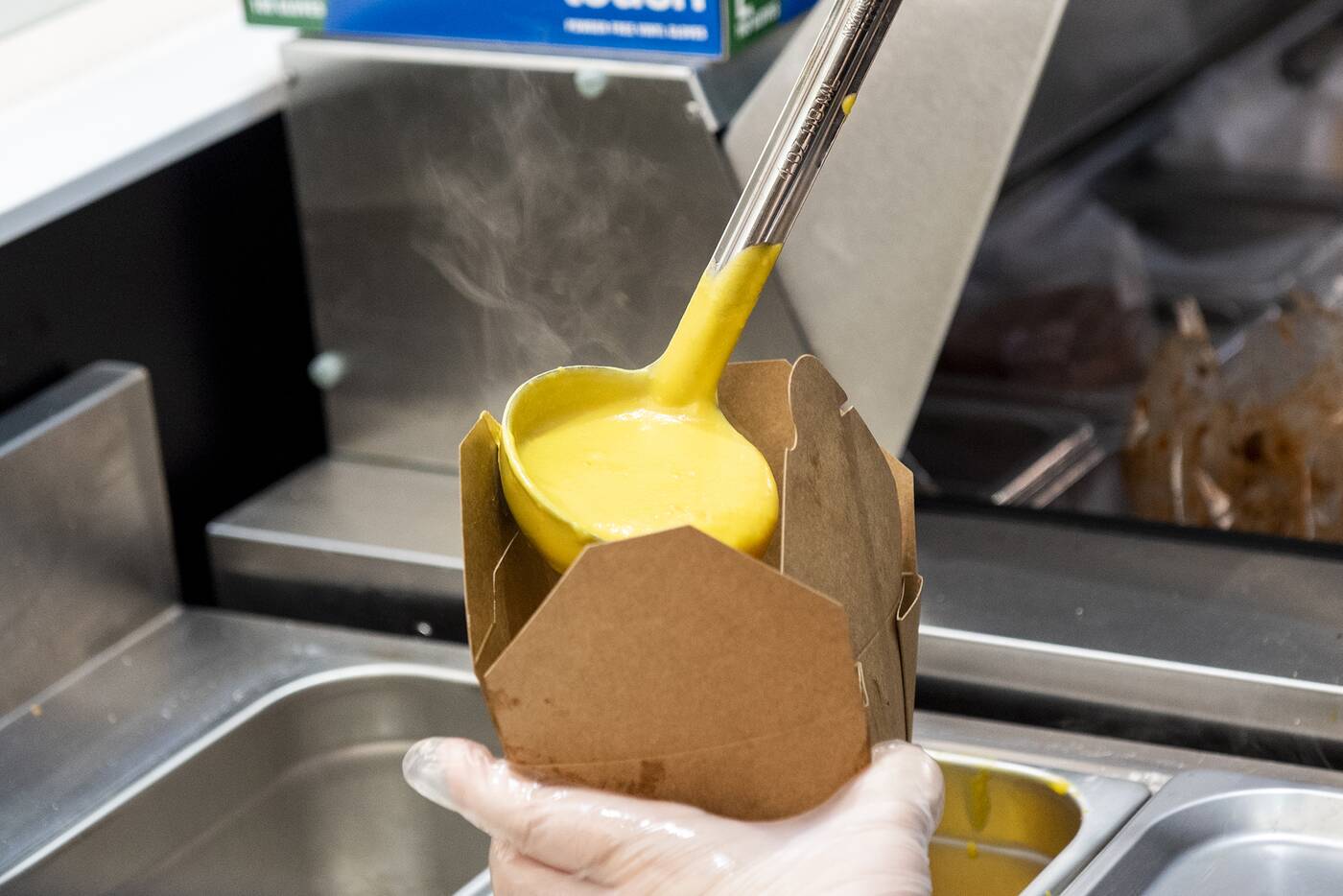 Wedgy, slightly underdone fries are smothered in a zesty potato, carrot and onion cheese sauce with garlic and turmeric, and topped with TVP taco meat, vegan sour cream, tomato and green onion. This one really grew on me. 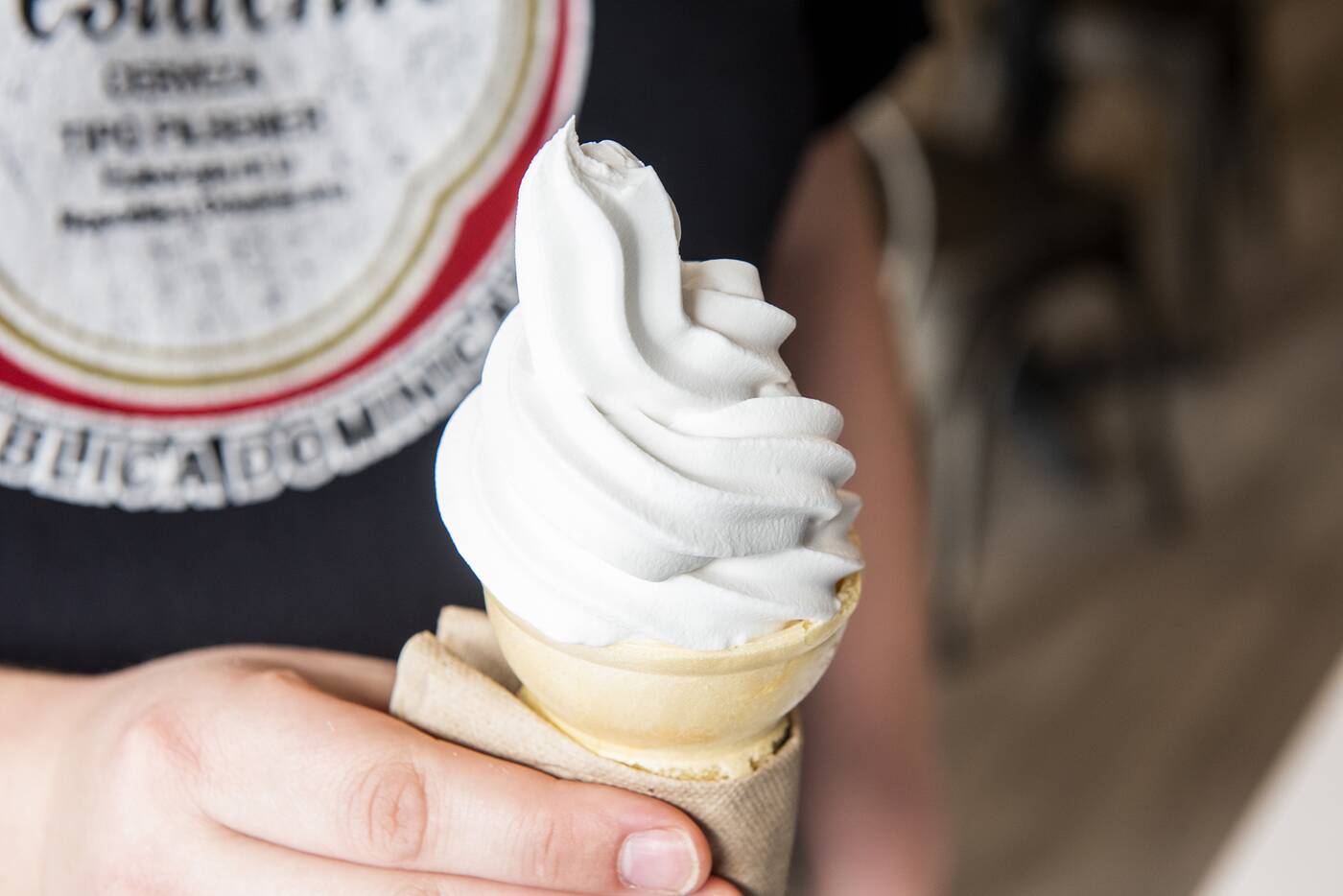 Coconut soft serve for $3.99 subs in for the cones you crave from McDonald's, though these melt much less quickly and have a lovely sweet pop of coconut flavour that's a real bonus. 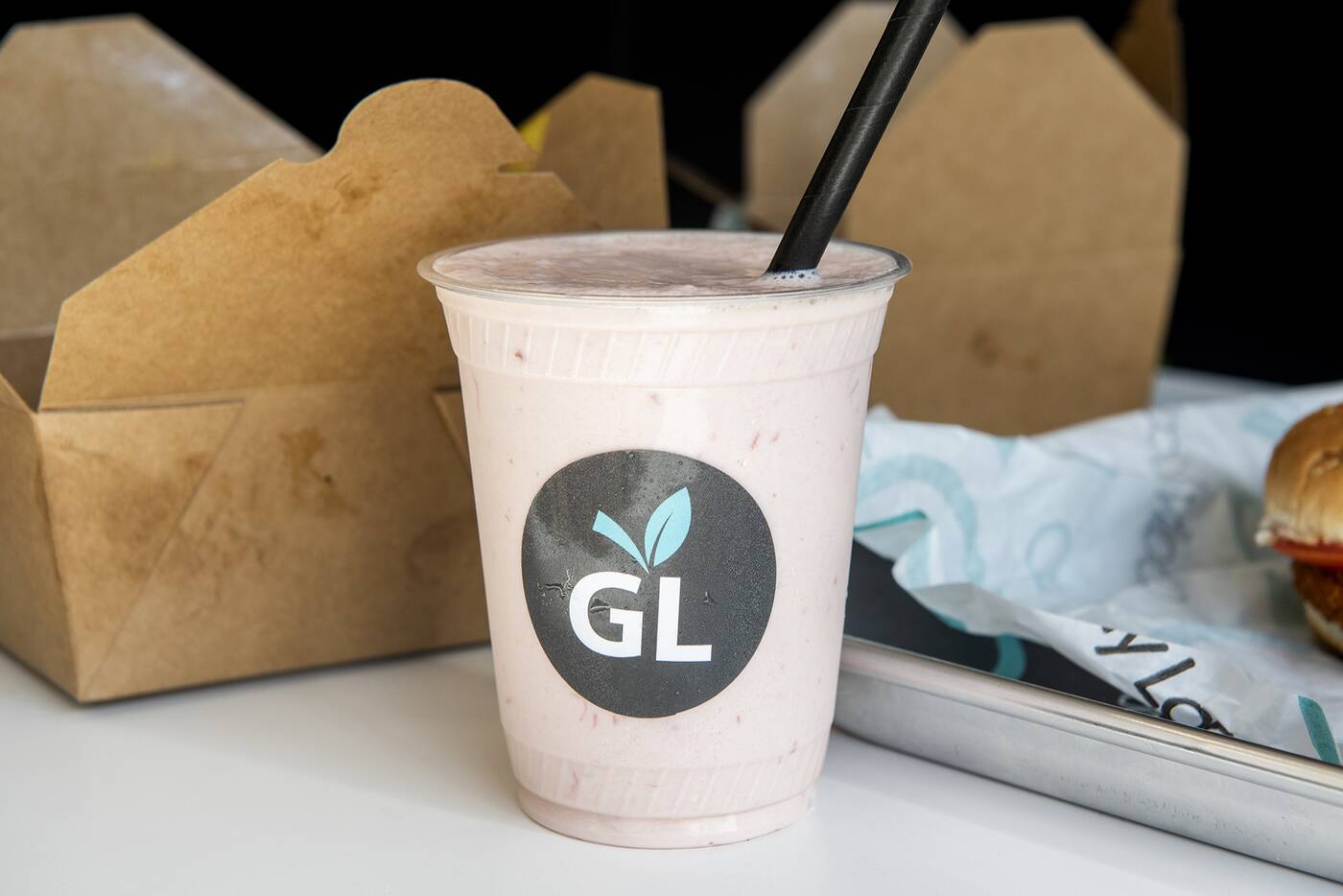 The soft serve is also incorporated into shakes ($5.99), in chocolate or a satisfying strawberry flavour. 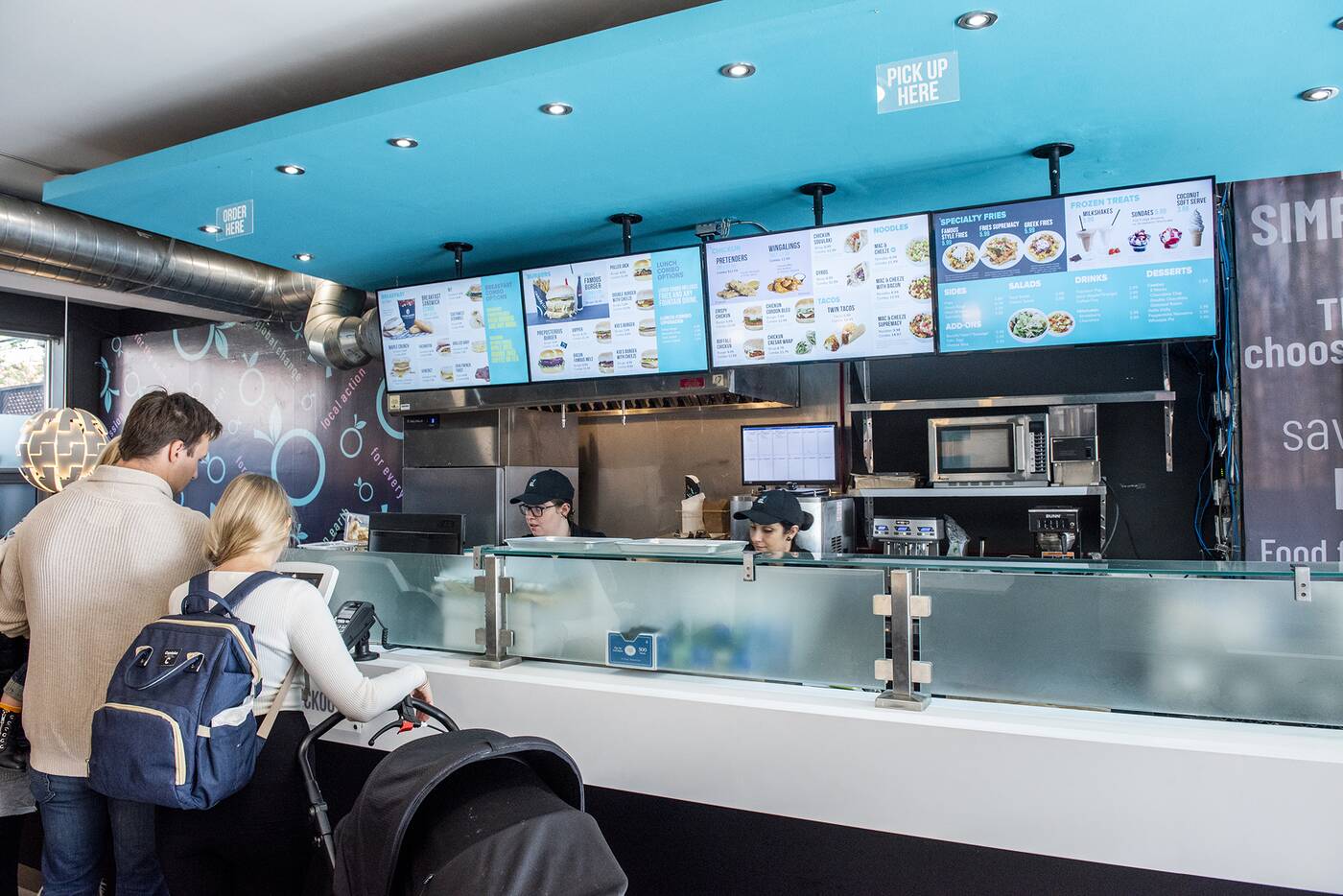 Globally Local has aspirations for at least ten locations in Toronto alone, and that just might happen if they stick to this model. 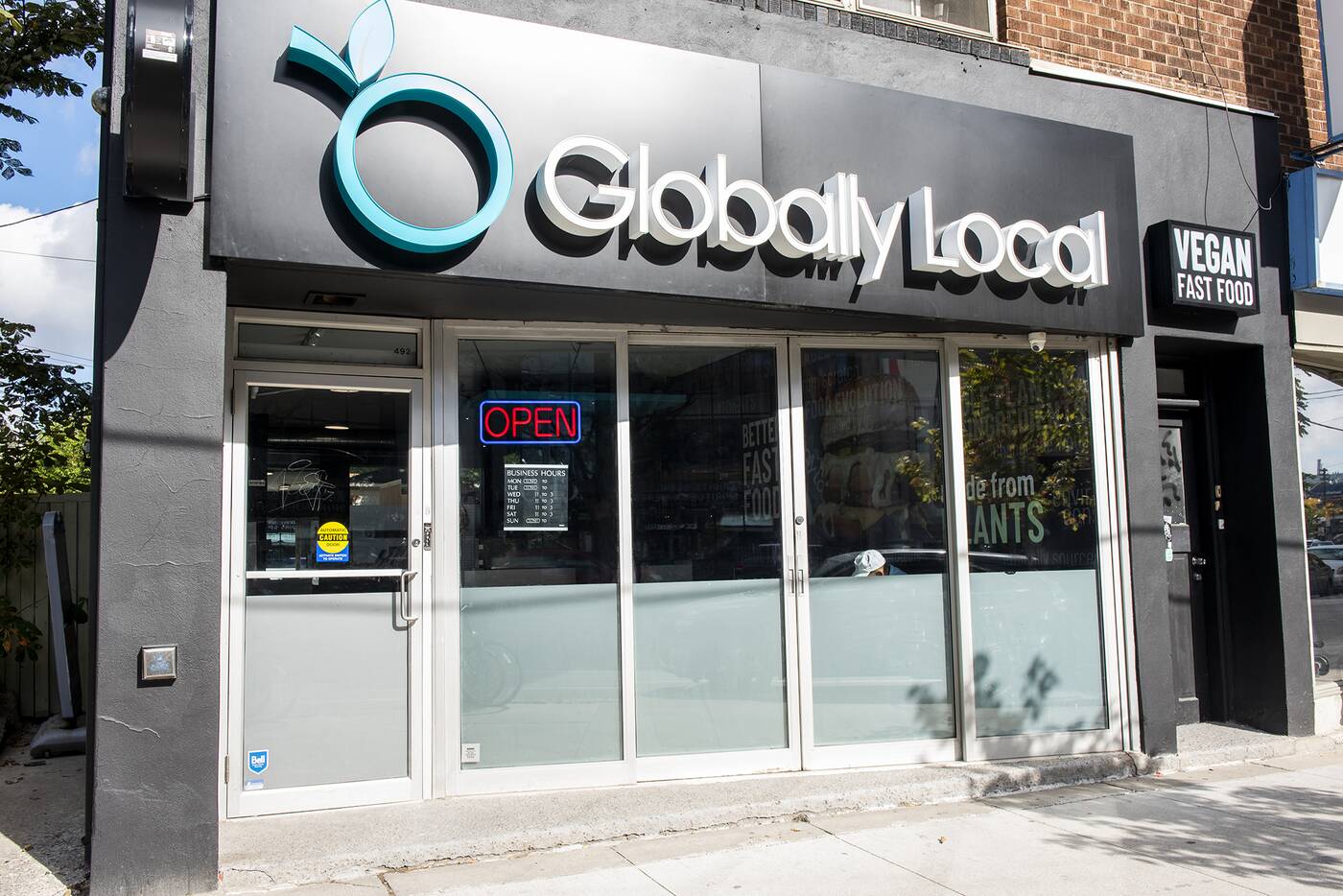