Bike trails in Toronto are easier to reach than you might think via public transit and Bike Share. The next time you're wanting to get outdoors and hit some local trails make sure to keep these three destinations in mind.

The Bike Share station is easy to find outside the Guildwood GO train station, the nearby multi-use trail not so much.

Cycle out the Lawrence Avenue exit parking lot and cross the intersection onto Celeste Drive. Then turn left up Greenvale Terrace. At Livingston Road you'll see the second bike station, which also marks the beginning of Highland Creek Trail.

For the most relaxed ride, lock and unlock a bike there and at the next three Bike Share stations. Each are about 20 minutes apart, 25-30 if you take it easy.

Just over 12 kilometres long and mostly downhill, the ride through Scarborough's Morningside Park and Colonel Danforth Park and down to the shoreline of Lake Ontario is by far one of the most natural bike rides you can experience within Toronto city limits. 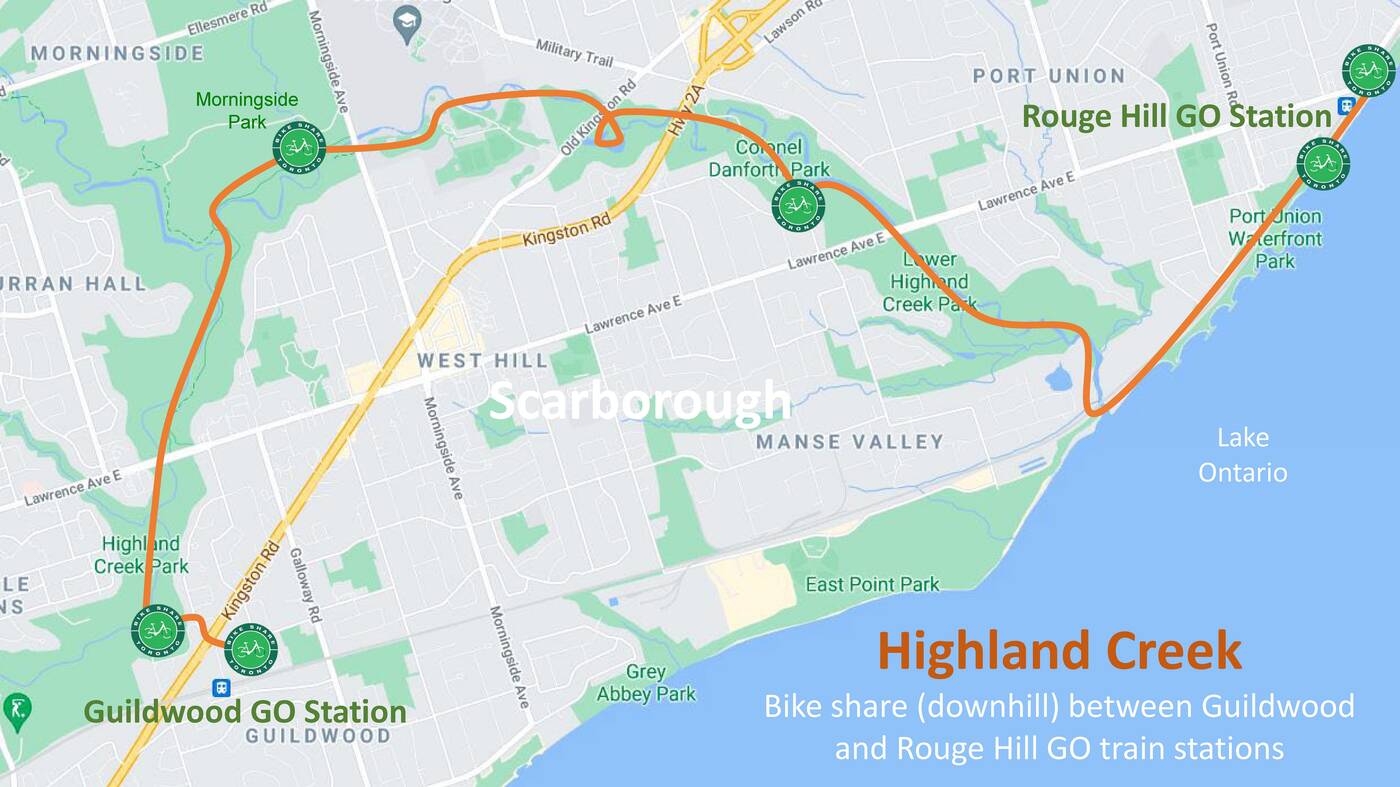 Among the highland forests, sandy ravine walls, historical plaques and lowland marshes, watch for deer, fish and a wonderful variety of birds. Turn left when you arrive at the Lake and join the Waterfront Trail. If you’ve got time, make a small circle around Port Union Waterfront Park.

To really make a memorable day of it, lock and unlock your bike again at the fifth bike station just before the Rouge Hill GO station, then take another half-hour ride a bit further down the Trail and back before catching the train home.

The beach and marsh at Toronto's eastern-most border are a must-see, there where the Rouge River flows into Lake Ontario. 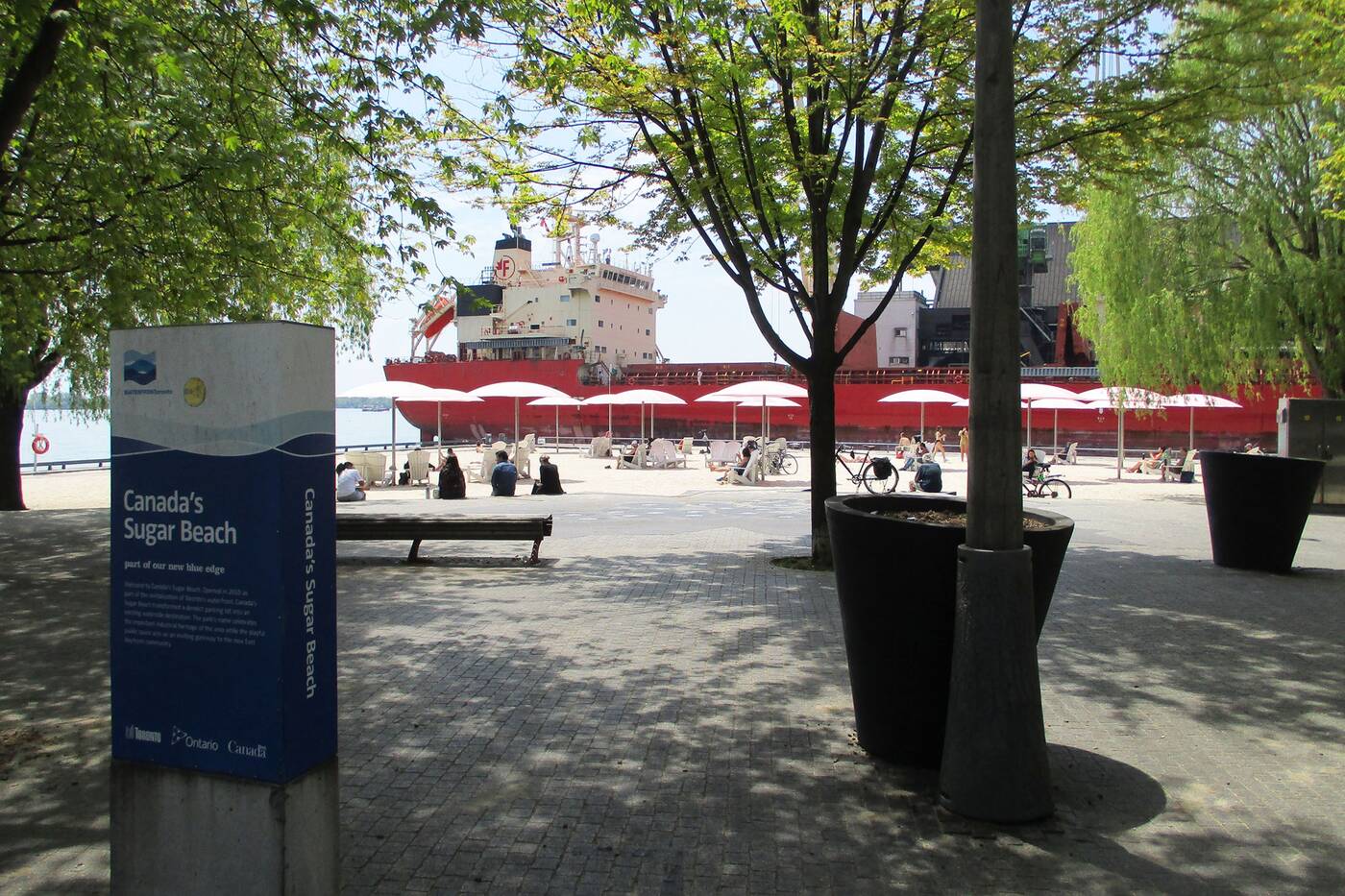 The Waterfront Trail - between Sherbourne and Union TTC subway stations

From the Sherbourne subway station exit on Bloor walk one block south to find the Bike Share station at the corner of Sherbourne and Howard Streets.

The first half of this ride is exquisitely urban as you glide down Sherbourne's protected bike lane all the way to the Lake. Keep an eye out along the way for the beautiful if compact Our Lady of Lourdes Cathedral and green houses of Allan Gardens.

Hot? Stop at Sherbourne Commons South for a quick run through the Paul Quarrington splash pad. From there turn right aka west up the Waterfront Trail.

There's a Bike Share station ahead after George Brown College. Dock and take the short walk back for some down time at Toronto's pride and joy Sugar Beach. When will you ever again have the chance to sun yourself, next to an ocean liner? 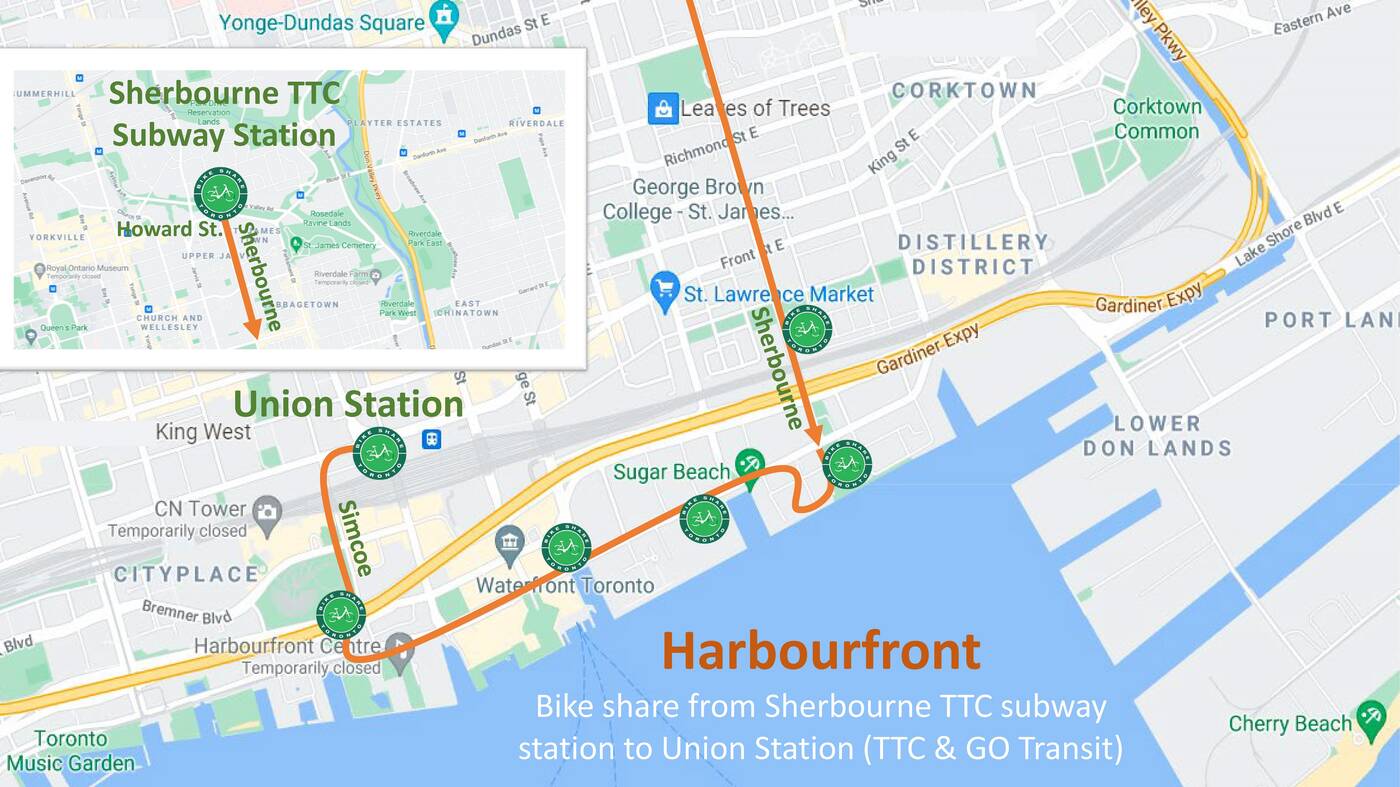 In the kilometre ahead there's an abundance of Bike Share stations if you want to stop and take a walk around Queen's Quay, check out the tall ships, grab some food and see if anything’s going on outside at Harbourfront Centre.

To end the six-kilometre ride, head up the semi-protected bike lane on Simcoe Street on the east side of the CN Tower. After passing under the tracks, turn right onto Front Street to dock the bike at the corner of University or in front of Union Station. Then, so simple, it’s the TTC subway or GO train home. 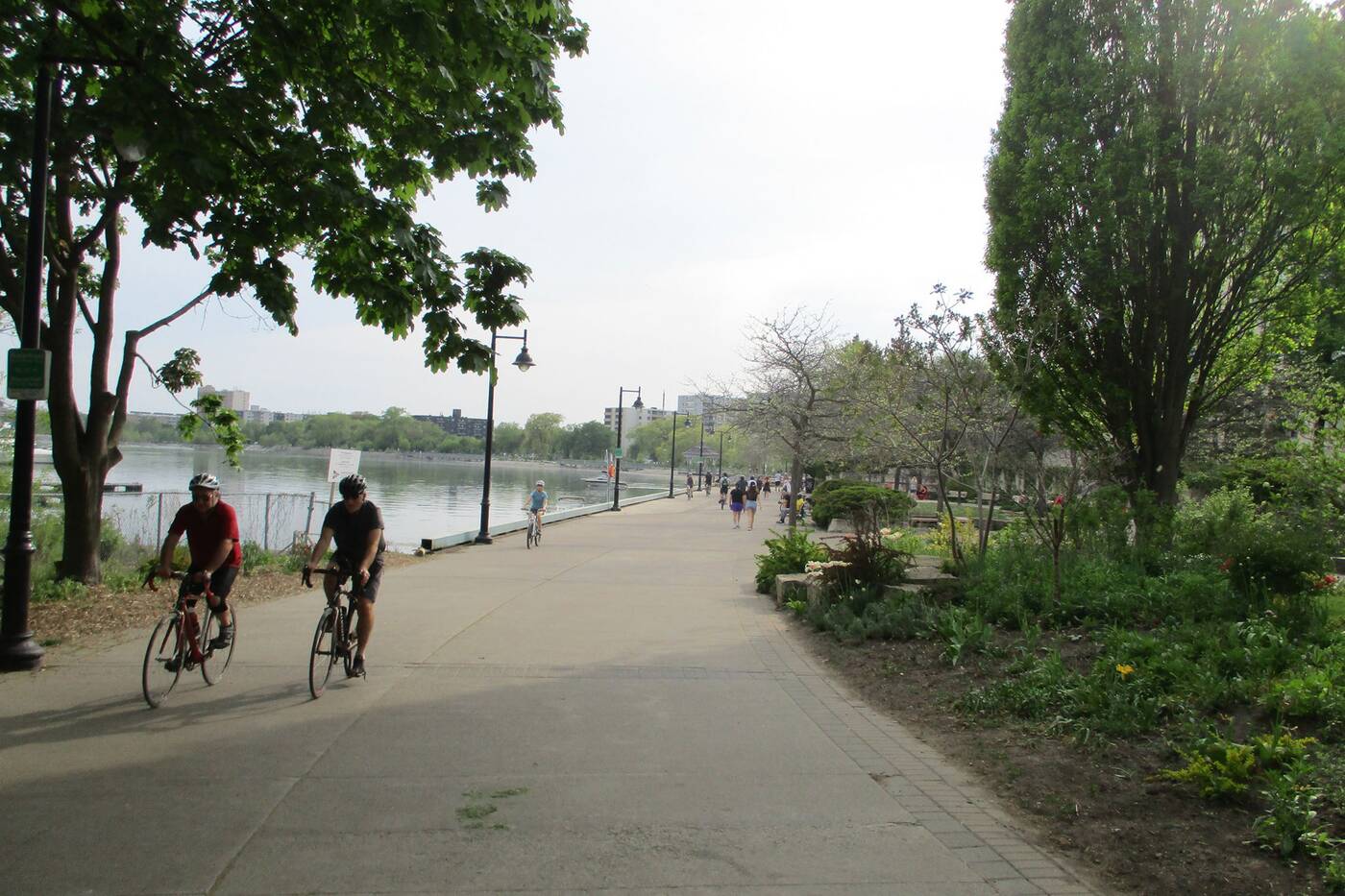 Biking along the waterfront. Photo by Donald Wiedman.

The Great Trail - between Union and Mimico GO train stations

This 14-kilometre ride begins at Union Station, and features everything Toronto’s western lakefront has to offer. Pick up a bike from one of two stations on Front Street at Bay or University, then head west to take the semi-protected bike lane south on Simcoe to The Great Trail at the Lake.

Turn right or west at Harbourfront Centre and before you know you'll be whistling past the blossoming Toronto Music Garden, the new Toronto Inukshuk Park and Ontario Place.

Then it's a good pedal past the sands of Sunnyside Park and over the stunning arch bridge at the mouth of the Humber River.

Watch the clock but do try to ride the gravel trail that outlines Humber Bay Park East. Or, there's a bike docking station on the west side of the Park just before a second arch bridge. Leave the bike there to walk back for a take-out coffee from one of many cafes in front of the don't-miss, biodiverse Humber Bay Butterfly Habitat. 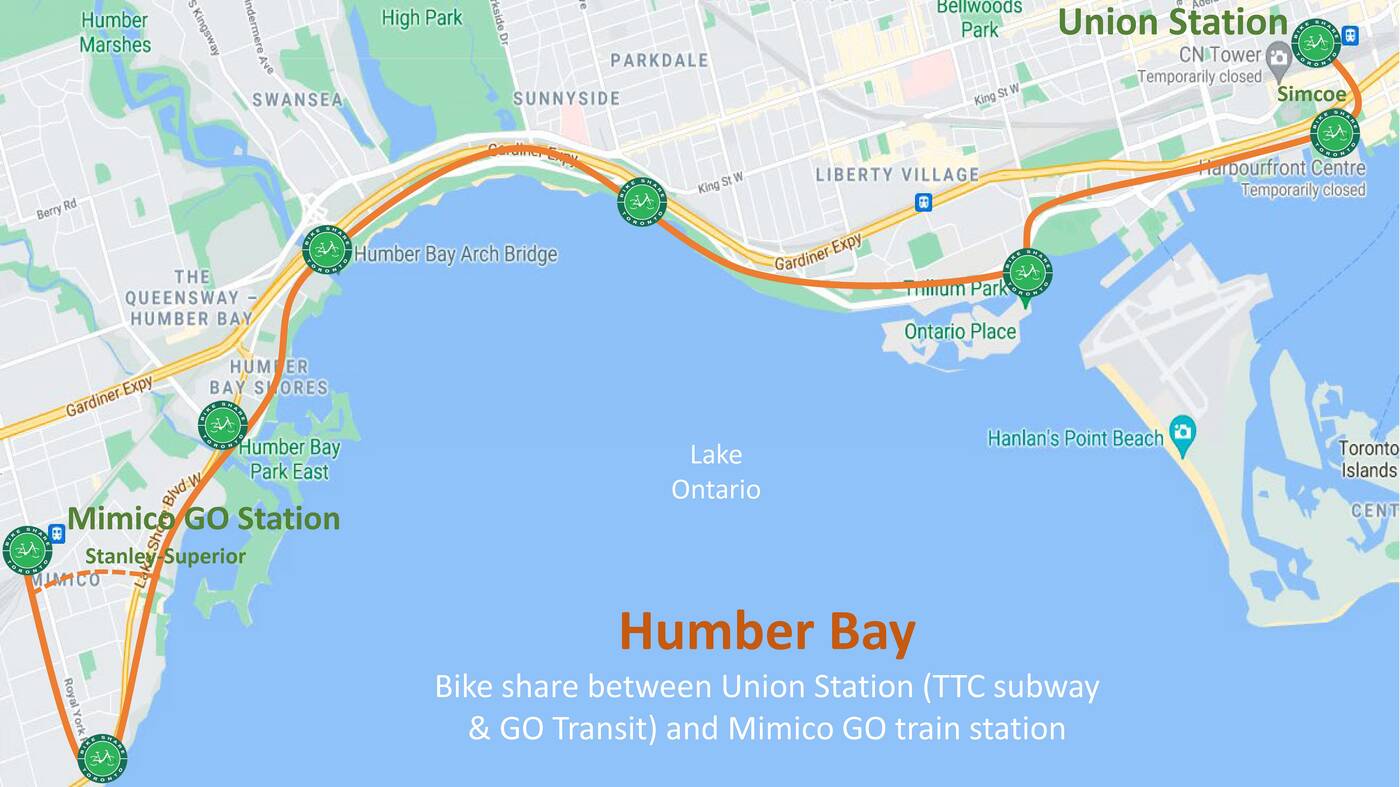 From there it's west again on to the Mimico waterfront. At Norris Crescent Parkette follow The Great Trail right to the elevated bike lanes along the south side of Lake Shore Blvd. to the bottom of Royal York Road.

Head up Royal York Road's painted bike lane to catch the train home at the Mimico GO station. Dock the bike just north of the tracks at the old Mimico train station using the crosswalk to safely cross Royal York.

Even better, with a Presto Card you get 10 per cent off your first year of membership with Toronto Bike Share.