The winding Valley Land Trail descends a 19-metre slope before leading into the beautiful Highland Creek Valley in Toronto.

Located at the University of Toronto Scarborough campus, the 500-metre urban pathway winds through towering trees and gracefully descends the ravine slope. 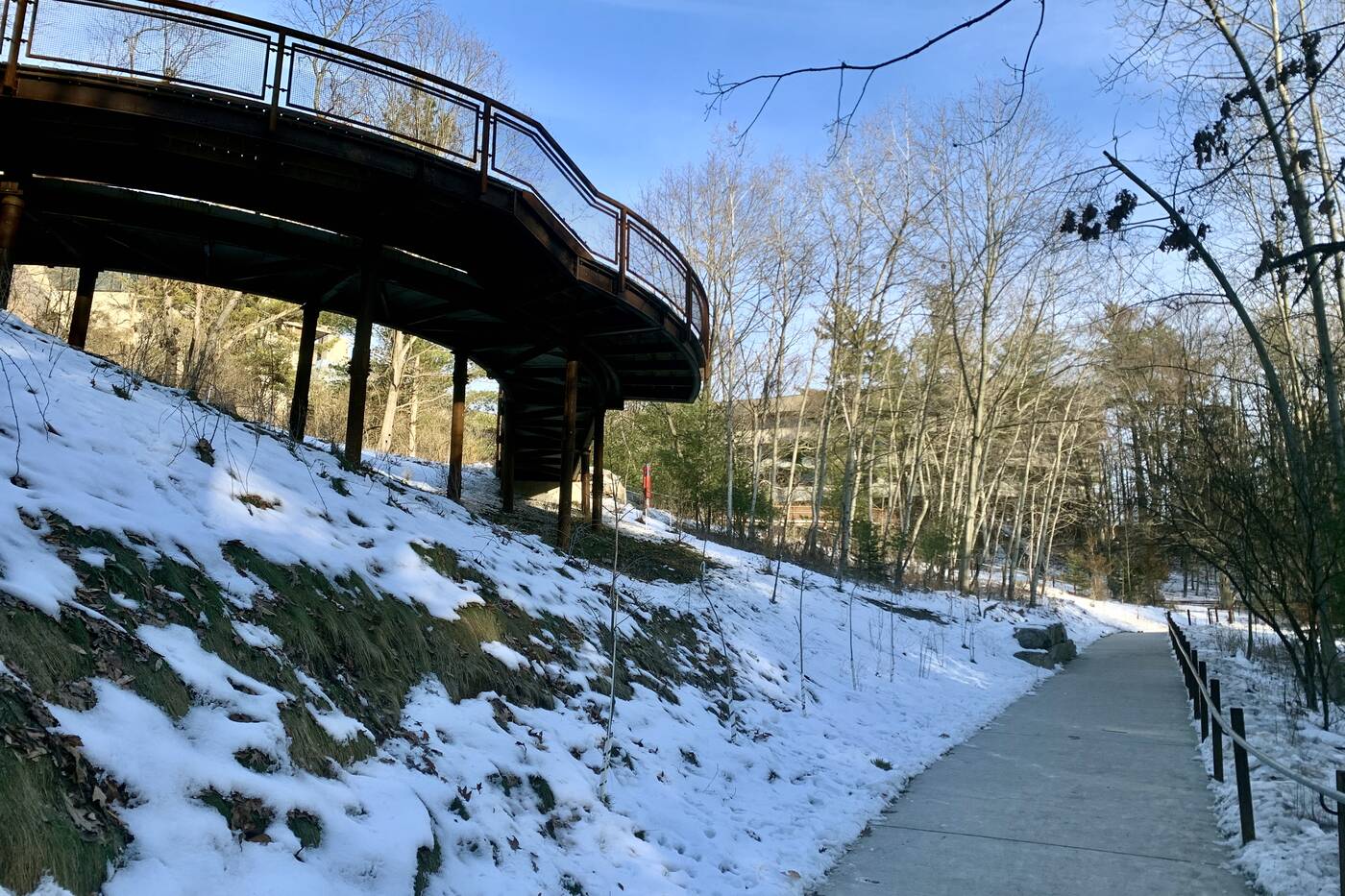 You'll even come across a bit of artwork during the walk when you pass the interesting spiked structure that sits at the top of the trail closest to the campus buildings. It was created by Quebec sculpturist Louis Archambault. 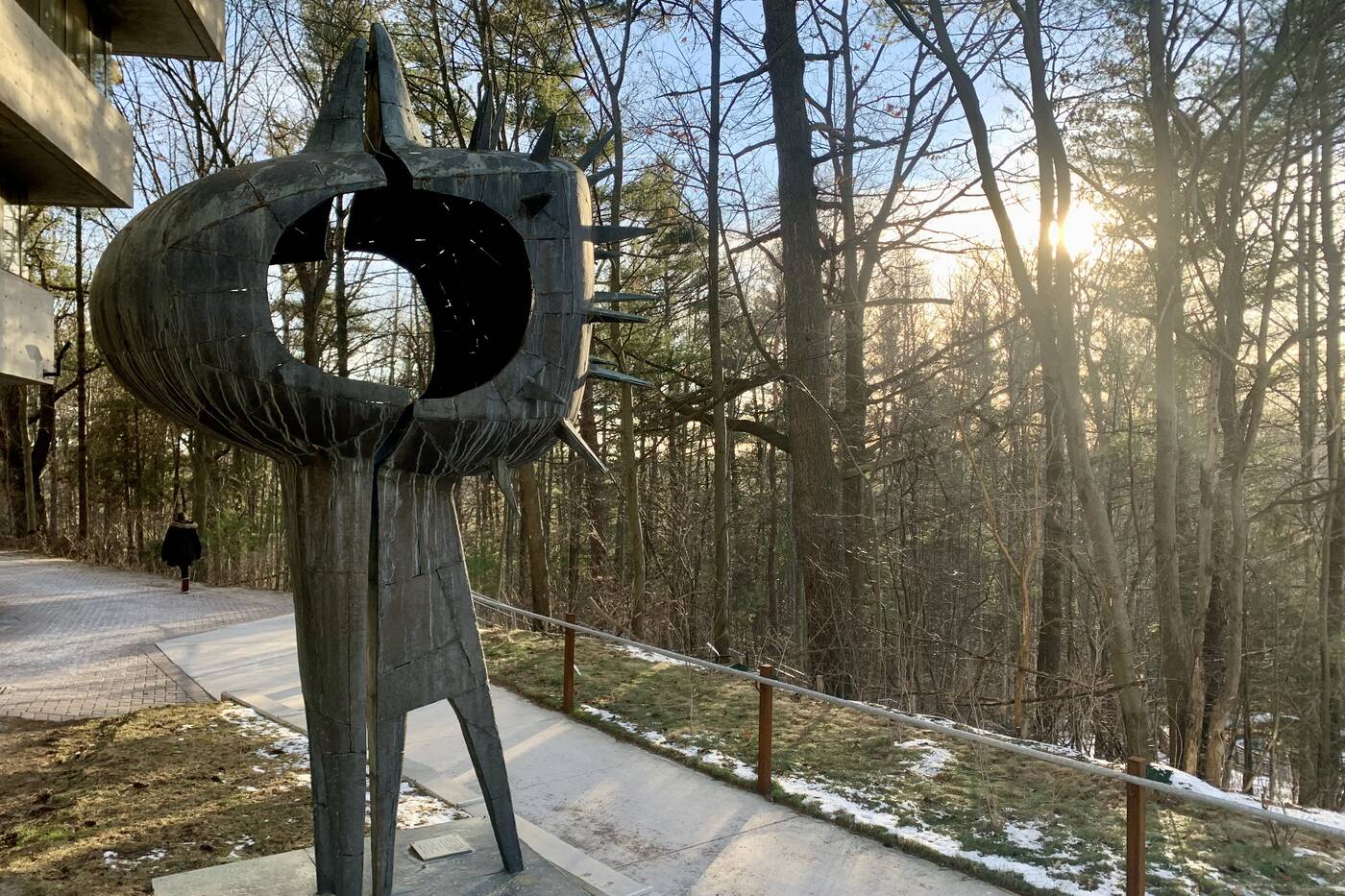 This sculpture by Louis Archambault is found at the top of the winding walkway.

You'll also find multiple lookout points with benches positioned along the paved walkway so that you can take in the views of the surrounding valley. 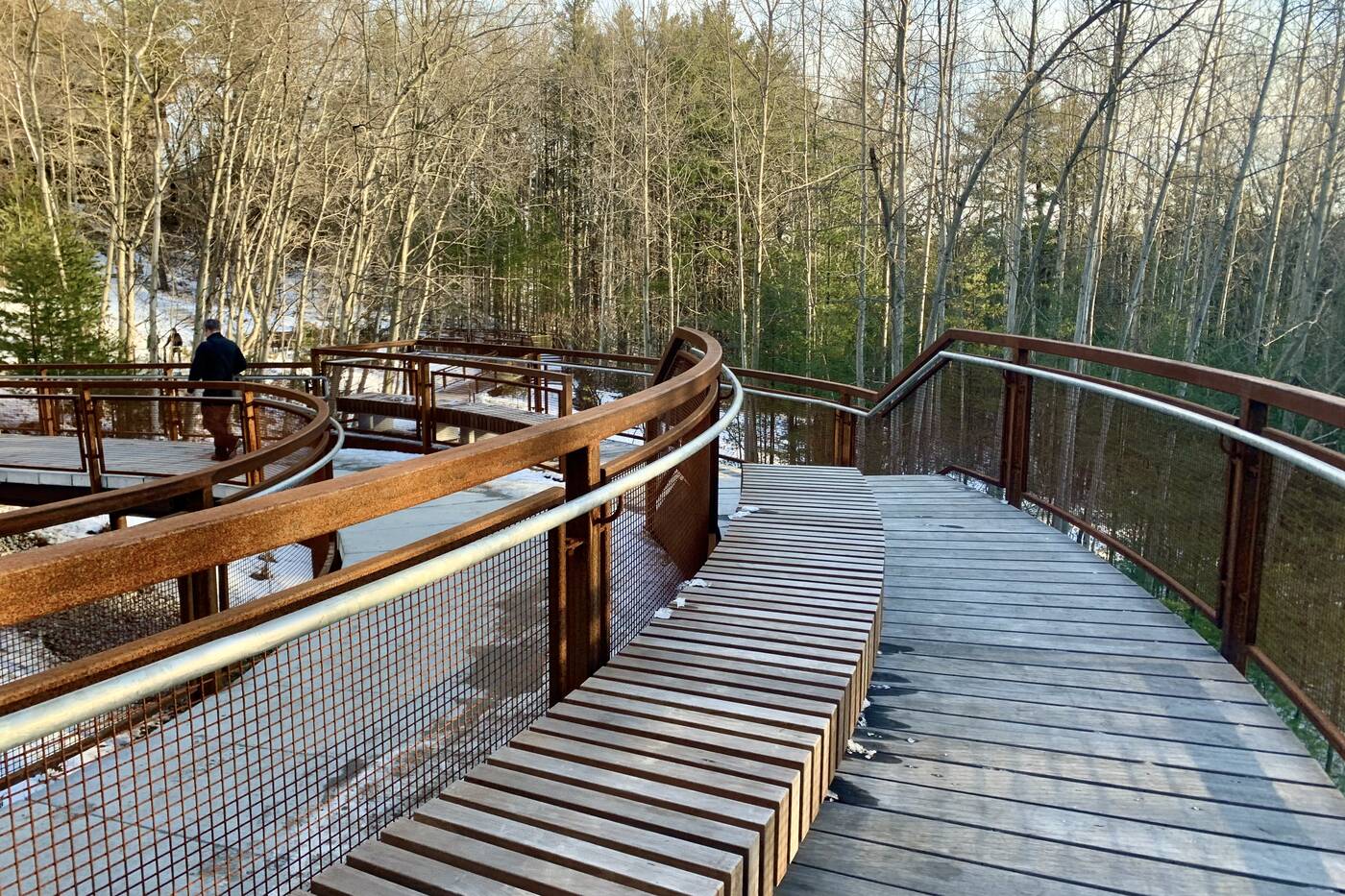 There are a number of benches throughout the walkway where you can take in the view.

The four-season trail was built to be completely accessible and even comes with lit handrails to guide evening walkers. 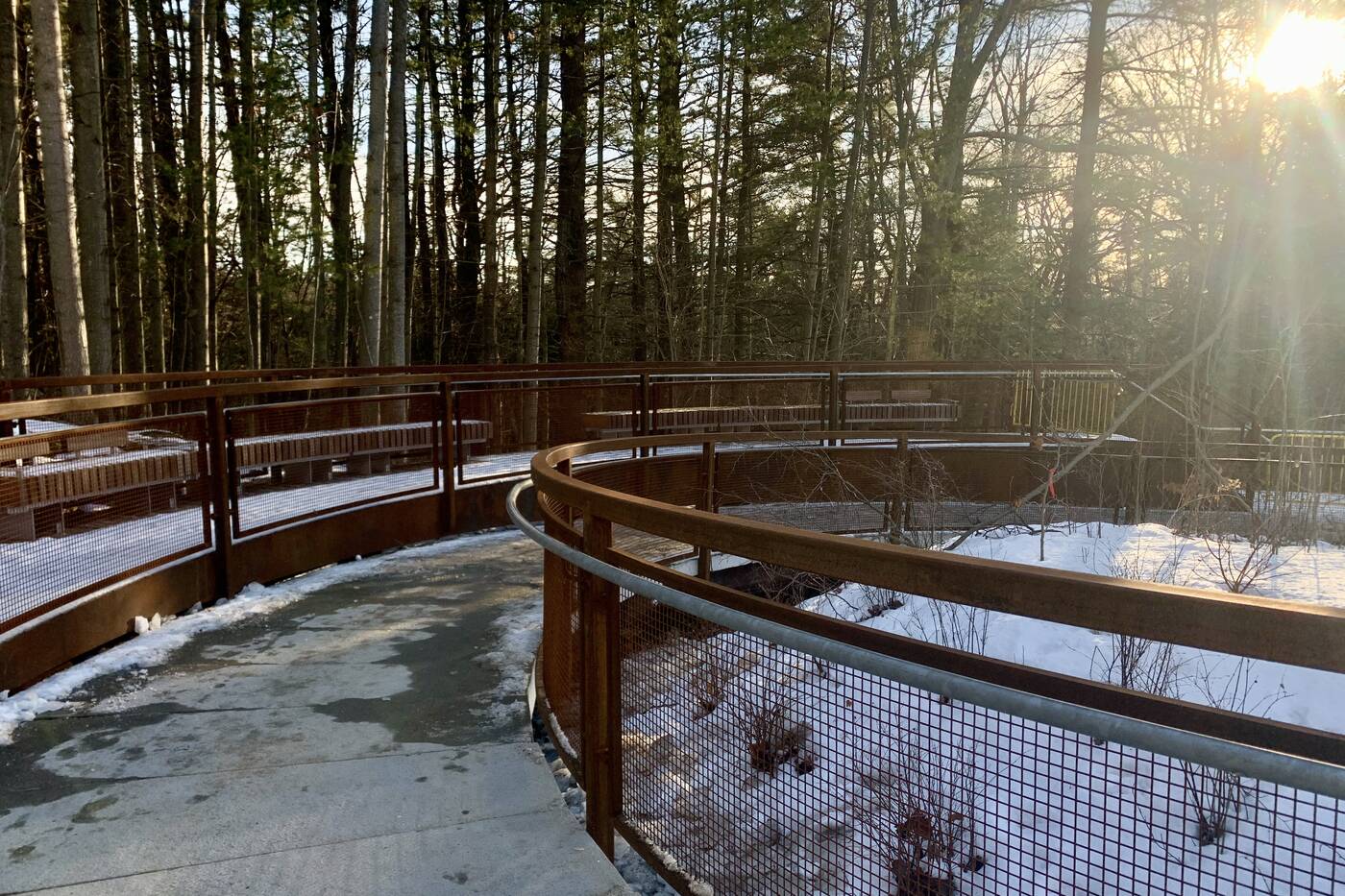 Despite being located on the University of Toronto Scarborough campus, the trail is still surrounded by forest.

With the trail located toward the main campus, there's a large parking lot situated nearby. If you're coming by TTC, you can take the 905 Eglinton East Express from Kennedy subway station. 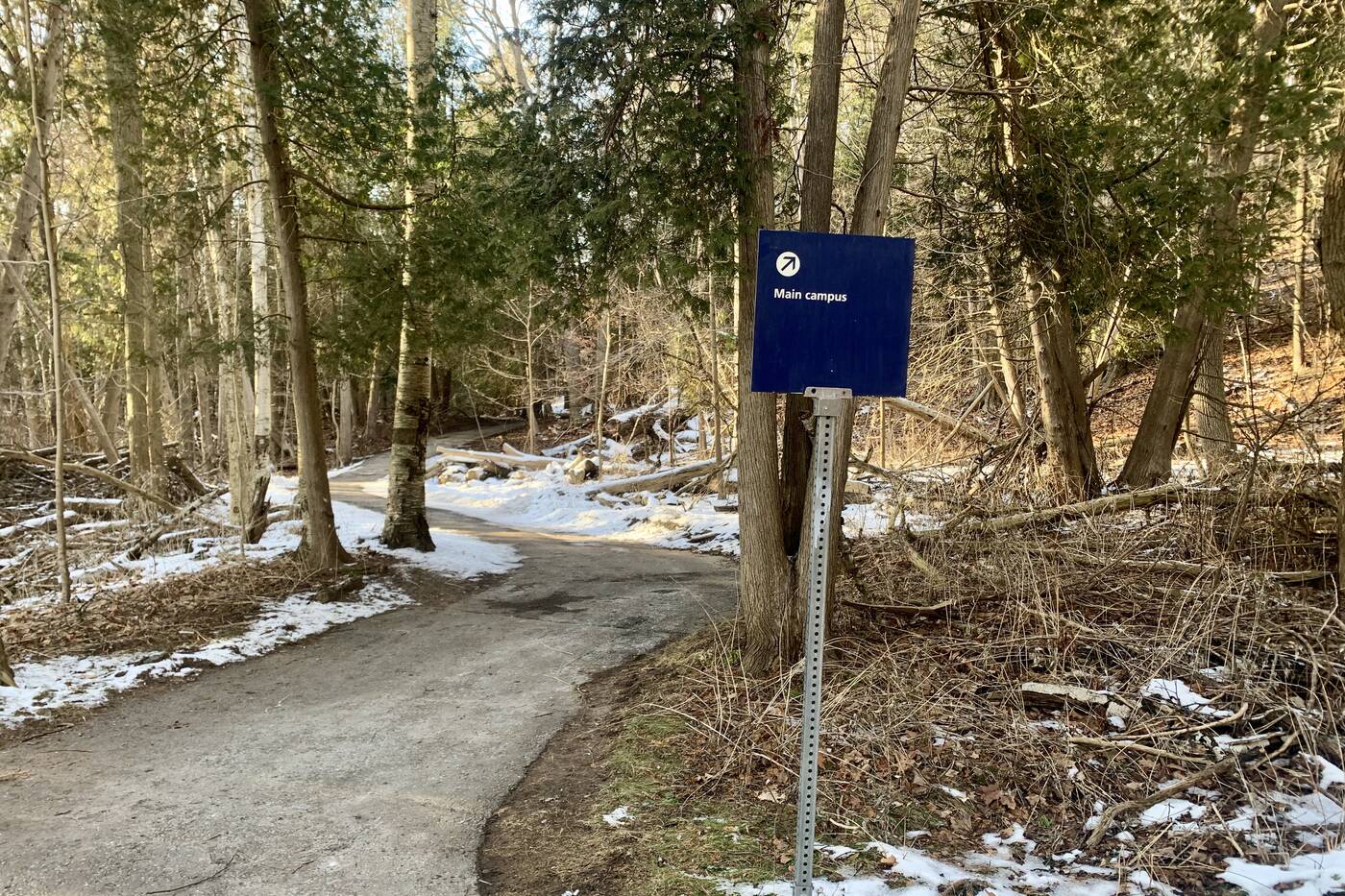 The trail is located near the main campus where you'll also find a large parking lot.

The Valley Land Trail connects to the maintained walking paths in Colonel Danforth Park to the east and Morningside Park to the west. 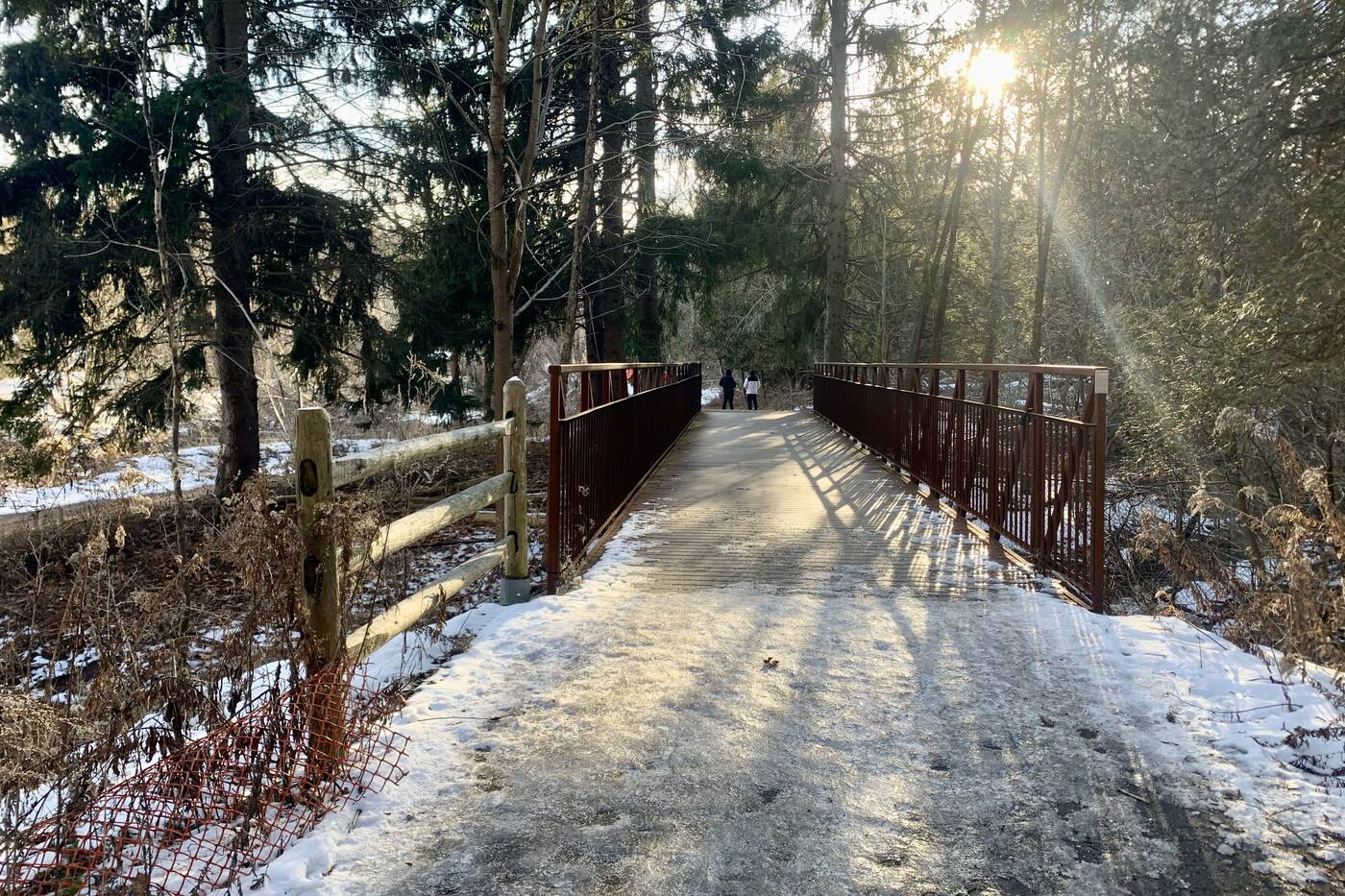 The trail connects to the maintained trails throughout the Highland Creek Valley.

You'll walk under a large overpass at Morningside Avenue as you head westward along the trail toward Morningside Park. 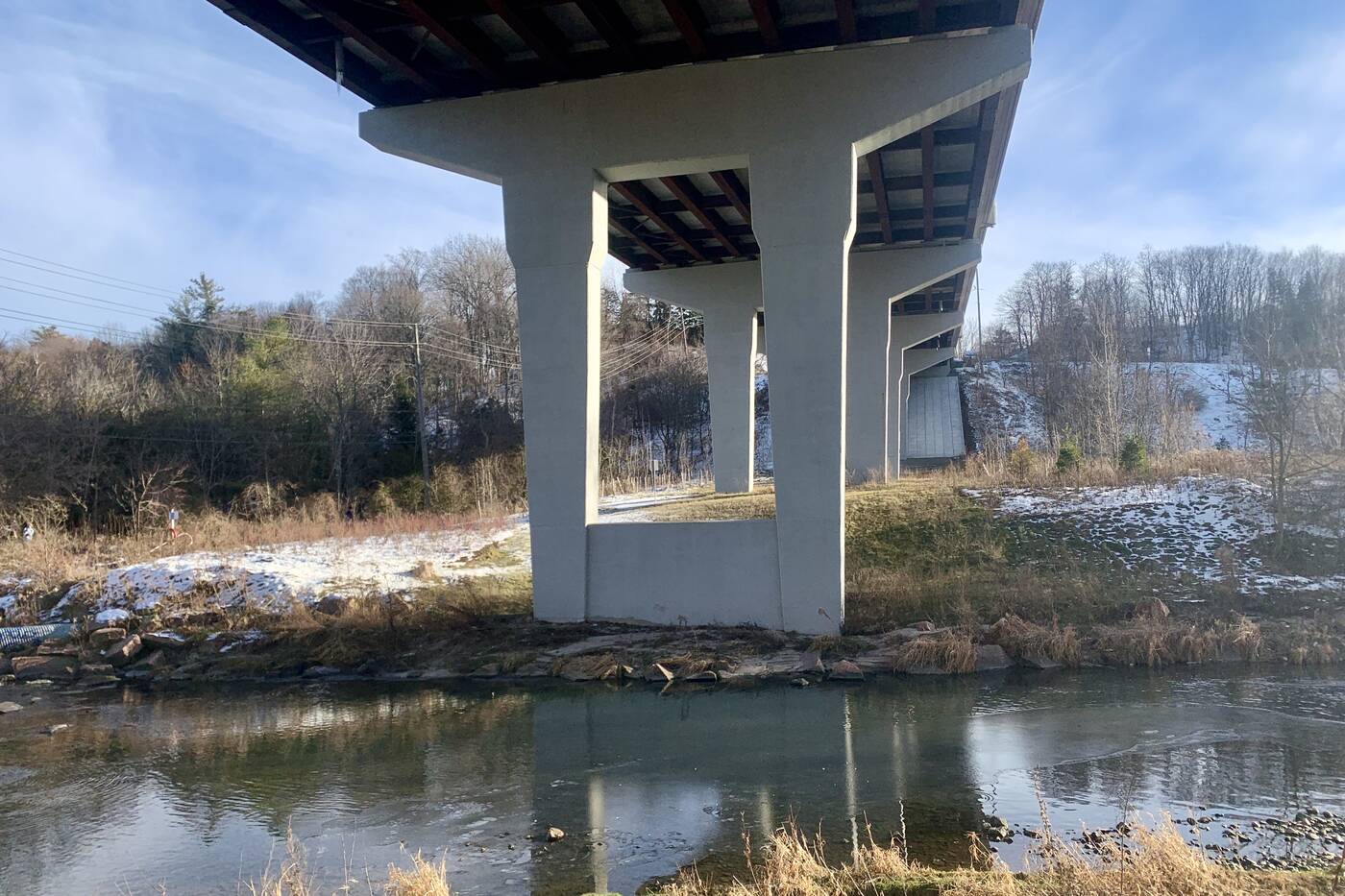 If you're careful, you can even easily maneuver your way down to the side of the creek to get a close-up view of a small waterfall that's located near the overpass. 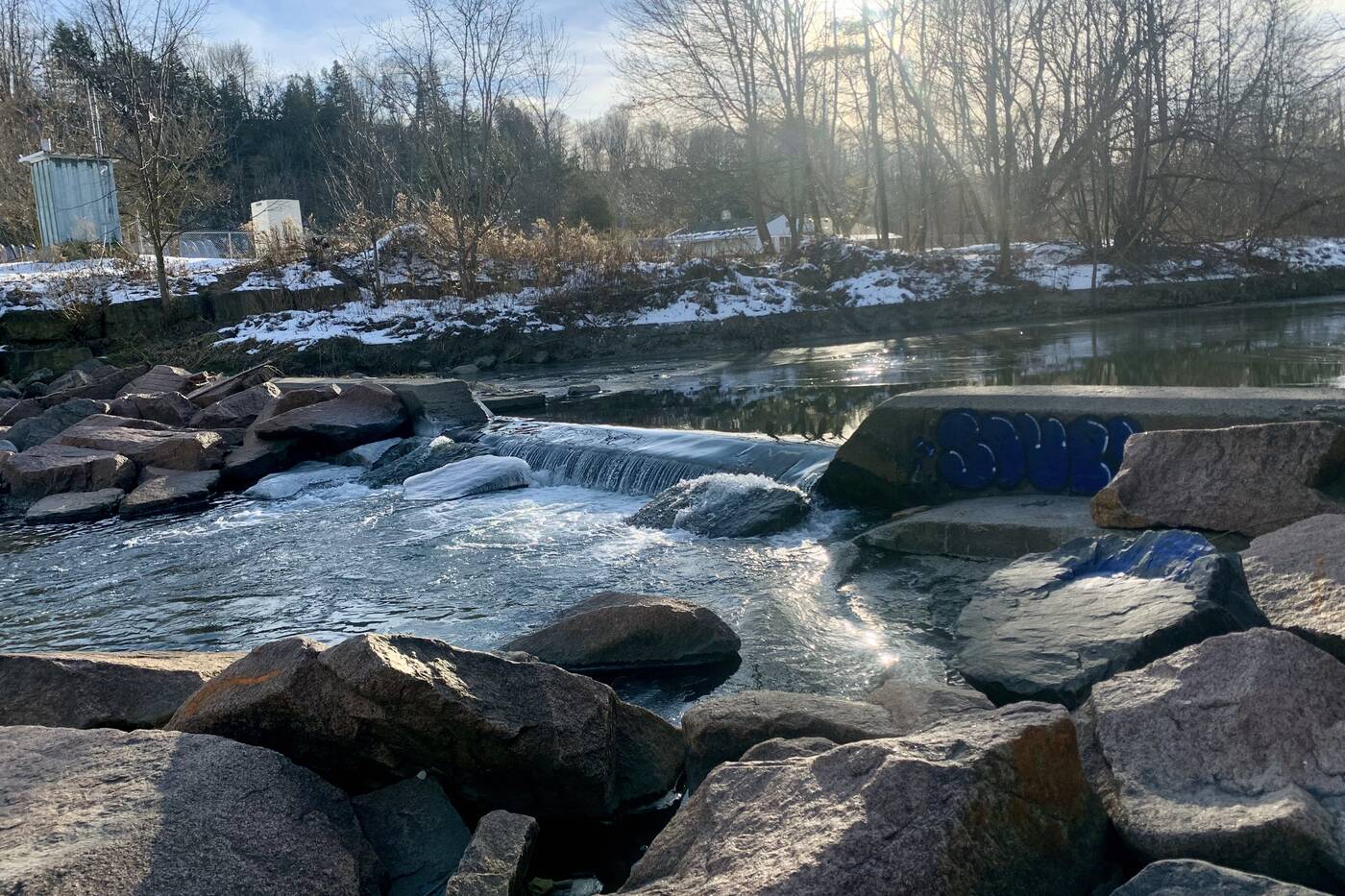 There's a small waterfall situated just past the overpass in Highland Creek.

Prepare for plenty of walking as Morningside Park is Toronto's largest municipal park by area. Spanning over 240 hectares of land, it's part of a continuous forested corridor along the lower reaches of the Highland Creek. 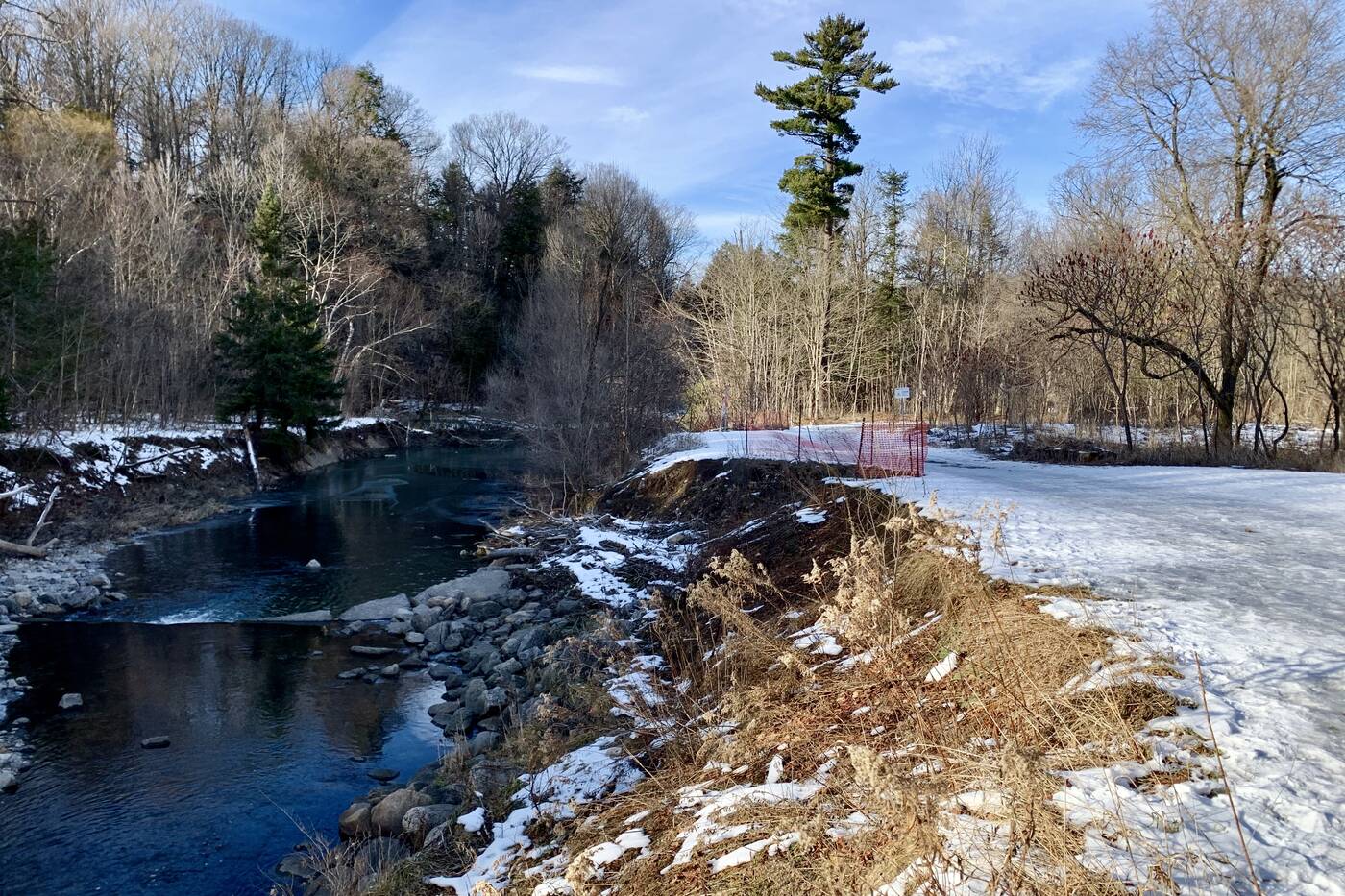 There are multiple viewpoints of the river as it flows right next to the trail.

The creek, which runs alongside the trails in the area, is a good spot to watch the salmon run in the fall. There are plenty of forested spots near the water to sit down for a picnic during the warmer months. 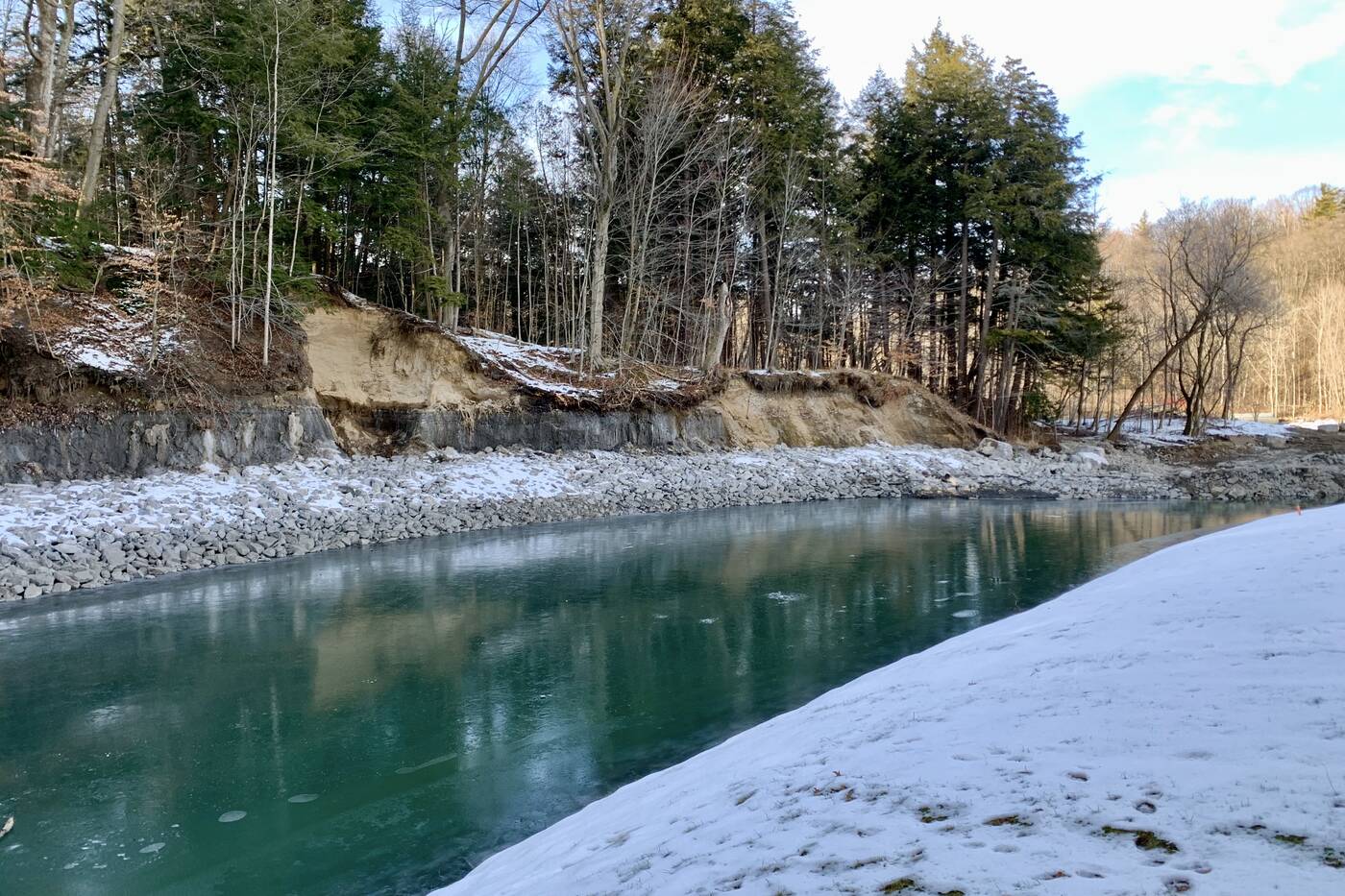 Eroded sandy cliffs can be seen along the riverbank.

There are also a number of powerful rapids to be found throughout the river that's continuously flowing toward Lake Ontario. 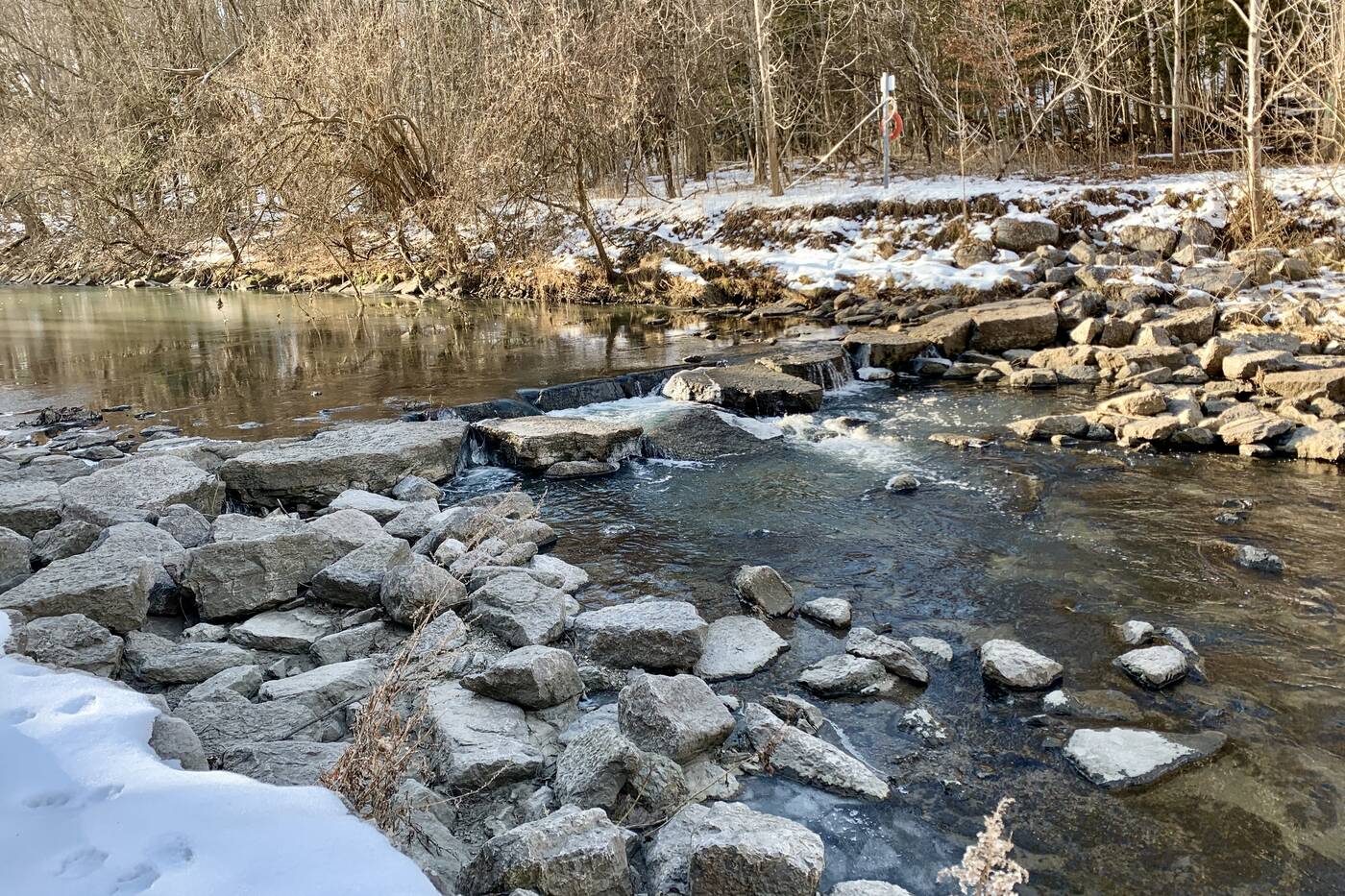 The creek is a popular spot to view the salmon swimming upstream in the fall.

Despite its close proximity to the rest of the city, the park features a high degree of wilderness with wildlife, eroded cliffs and a forest of mature trees to line the trails. 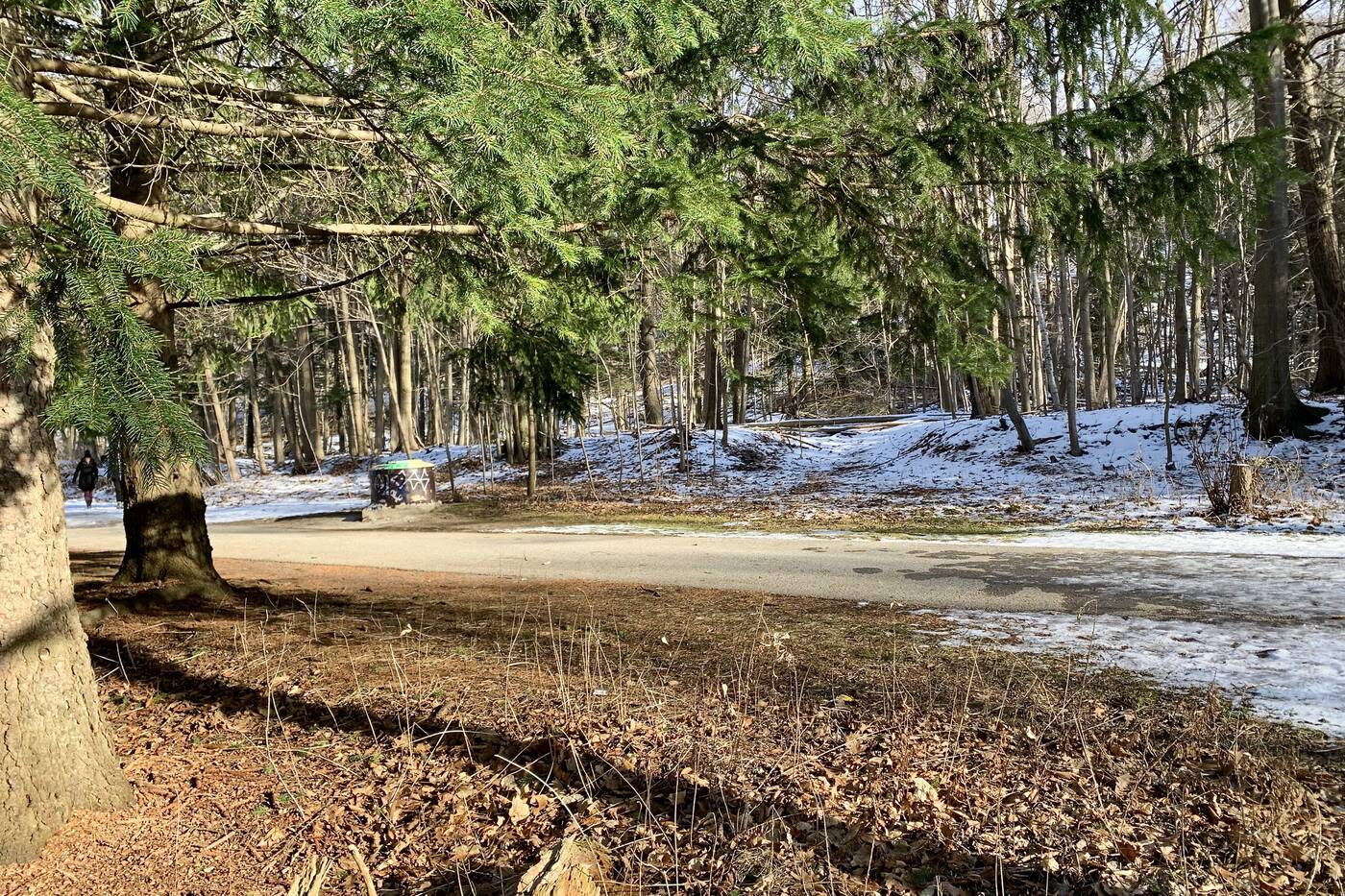