The top 20 toboggan hills in Toronto by neighbourhood

Toboggan hills can be found in most Toronto neighbourhoods. Whether you're after speed, city views or a relaxing ride, this list will be a good starting point to help you find what you're looking for.

Here are my picks for the top toboggan hills in Toronto by neighbourhood.

Riverdale Park is split in two by the DVP, and Riverdale Park West is the smaller version to its sister slope, Riverdale Park East. This is the better park if you're looking for something less steep (and also less wide). It's certainly a better hill for younger kids, and there's a staircase on the side, making climbing to the top much easier.

Withrow Park is another great spot in the east end. While it's still a steep hill, it's far shorter than some of the other black diamonds on the list and has a set of stairs on the side to make the trek up less of a fitness regime.

East Lynn Park, which is two blocks west of Woodbine and just south of Danforth, has a perfect slope for kids. It's short and relatively easy to climb back up again.

There's a great hill behind Don Mills Middle School. It's bowl-shaped, but it's a steeper slope. This makes it great for a bit more of a thrill, compared to some lower slopes. 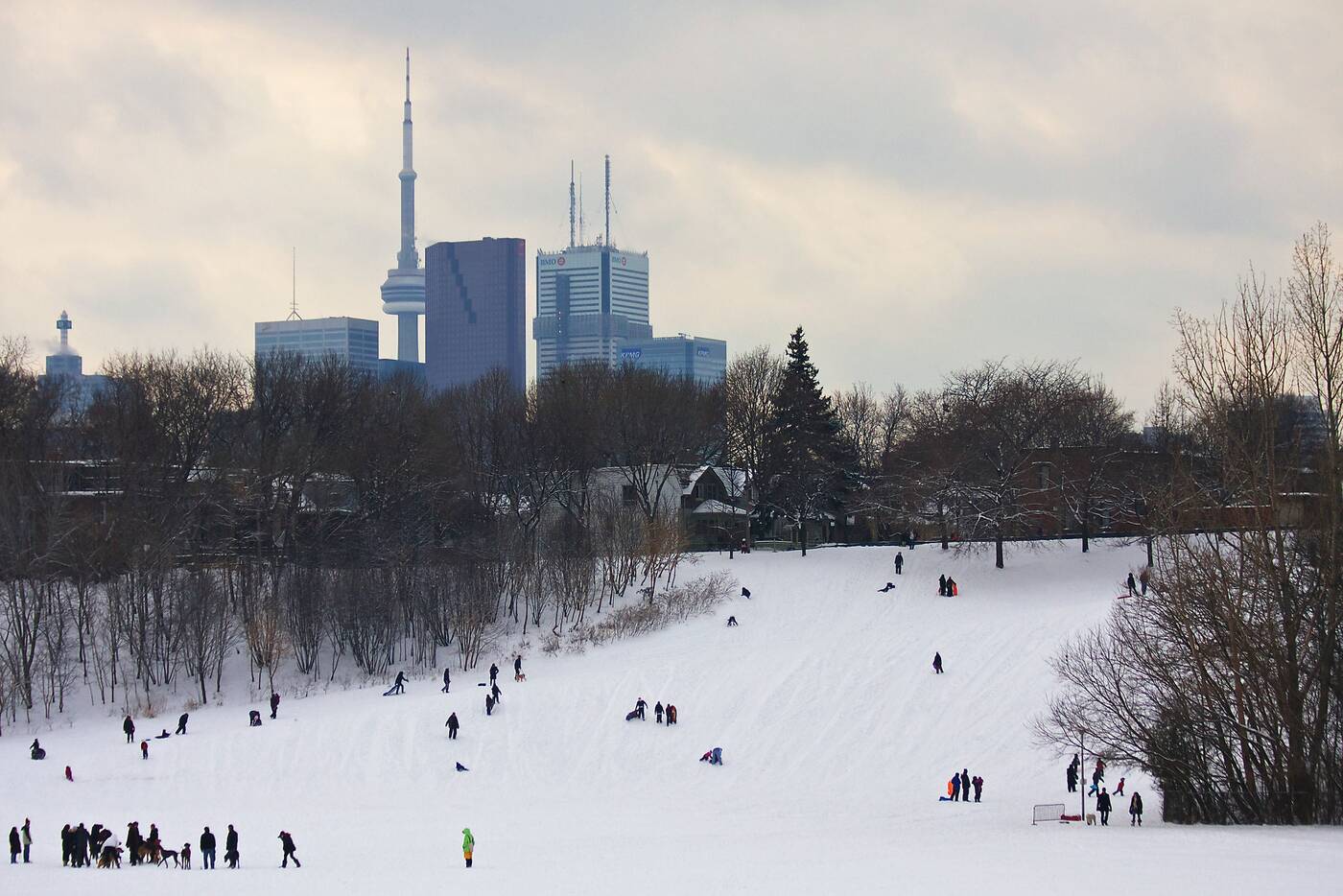 Toboganning at Riverdale Park West in Cabbagetown. Photo by CityPines.

Riverdale Park East offers unobstructed views of the skyline and an (arguably) perfect slope. Located just east of the DVP and south of the Danforth, the hill may not look steep from the highway, but you'll be pleasantly surprised once you look down from the top.

Donora Park, nestled in a residential area just north of Taylor Creek Park, has a smaller, more private hill. This is the spot to come to practise on a green run before making your way up to a black diamond. While not the most accessible via transit, there's plenty of street parking in the area.

While a large majority of High Park is banned, tobogganing is still permitted near Howard Park Avenue and Parkside Drive, where you can enjoy a pretty thrilling ride. There are also a few smaller hills nearby where you can set up a jump or two.

Christie Pits and Bickford Park have a few options, whether you're looking for a thrill or a gradual gradient. The hill just east of the skating rink on the north side will be the busiest and steepest spot. If you're looking for something a little less adventurous, there are plenty of options over at Bickford or at the southern section of Christie Pits.

Leaside High School offers a wide, short, yet steep slope. It's great for shorter bursts of adrenaline, and you don't have to put in too much effort climbing back up. It's a popular spot for families. 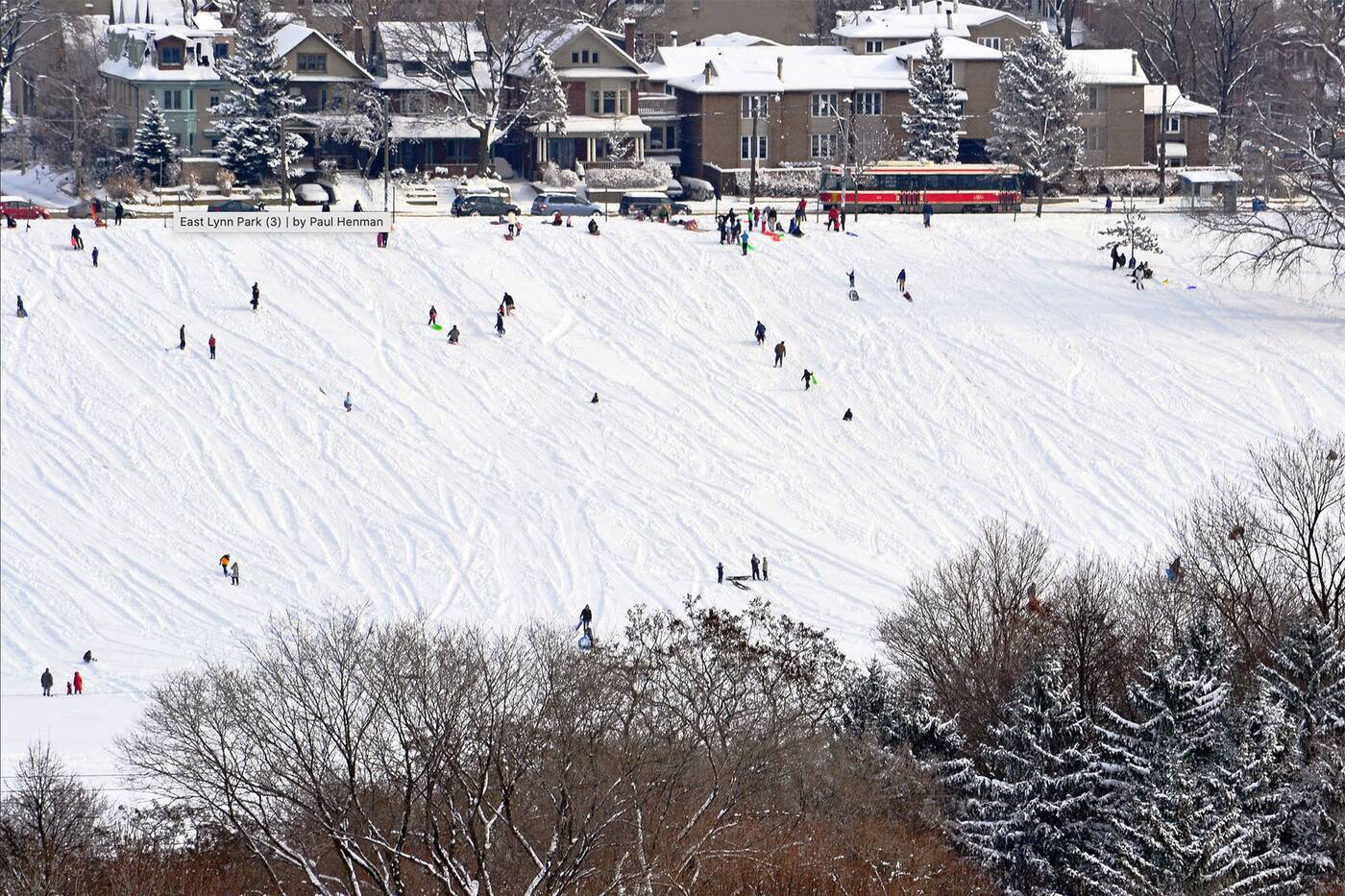 Just behind the Milliken Mills Community Centre is a hill that attracts many tobogganers of all ages and skill levels. The west side of the park is the place to be, but beware of the gully at the bottom that can throw tobogganers off their sleds. On a clear day you'll be able to see the CN tower from the top.

Located just east of Weston Road off of the 401, Pine Point Arena boasts a hill that is similar in magnitude to the Riverdale East and West duo, and comes with plenty of parking near the arena. Come here if you're looking for a hill with a long run-out at the end.

Linus Park, located near Finch and Don Mills, has a wide hill with a gentle slope. Sandwiched between two schools, this hill is a good spot to ease yourself into the sport, if you've never gone tobogganing before.

Chapman Park is the spot to go to in Richmond Hill, with a popular toboggan hill that starts from Hunter's Point Park and leads into Chapman Park. While it's not the widest hill on the list, it's an unobstructed slope with a nice long run-out, so you don't need to worry about colliding with the fence enclosing the baseball diamond at the bottom.

L'Amoreaux Park is Scarborough's best kept secret, with little traffic frequenting the spot. Located in the Toronto hydro corridor, L'Amoreux offers a narrower hill with a longer run-out than a few of the others, so there's no chance you'll run into obstacles below.

Rennie Park at Ellis and the Queensway is the spot to embrace all things winter. There's a skating rink and a hockey pad, but the Rennie Hill, located on the southwest side of the park near the school, is the place to go for a relatively steep sled and wide open terrain. 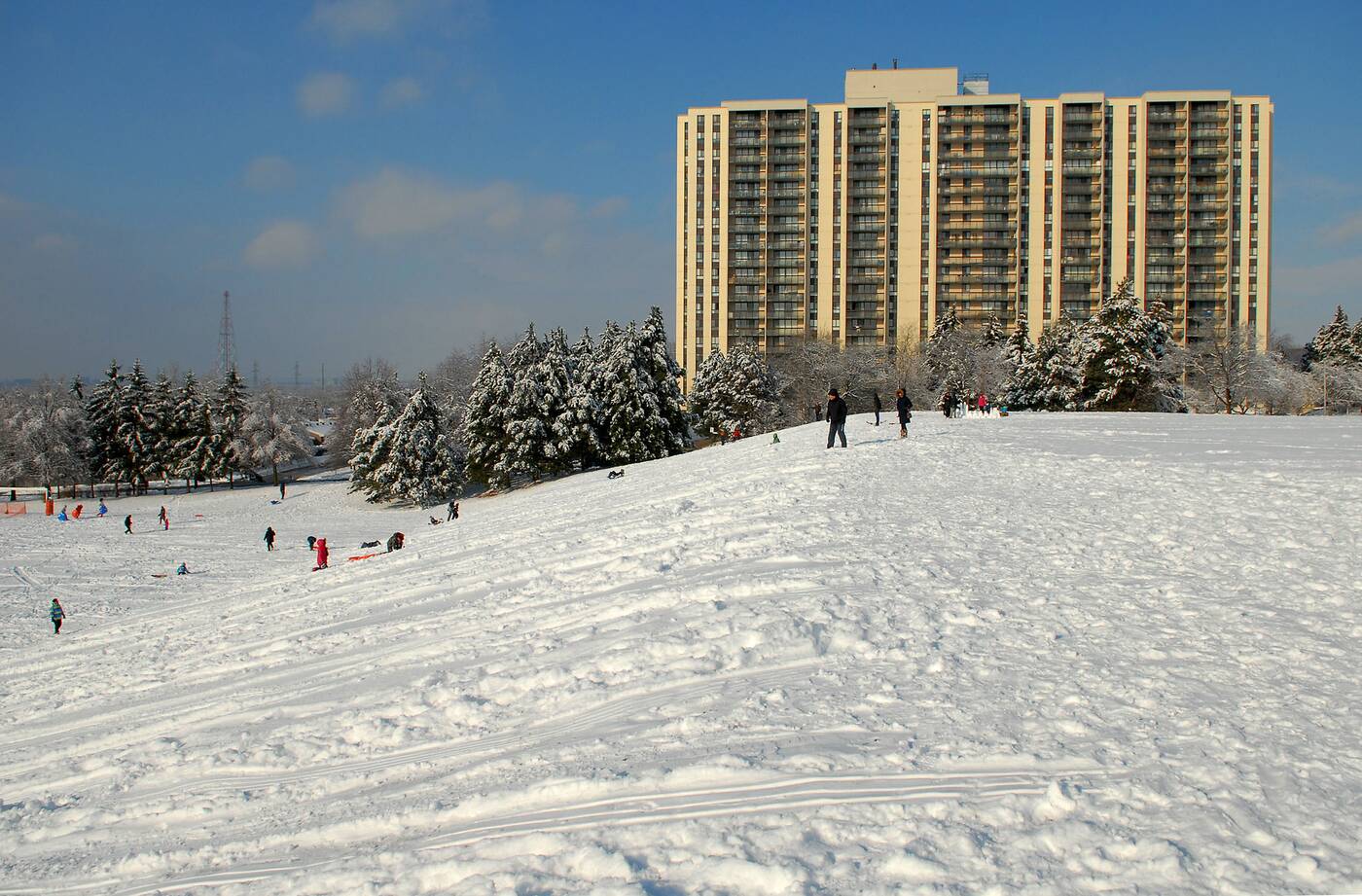 The hill at Cedarvale Park is fairly long with an unobstructed path, and there's enough of a run-out to ensure you slow down. It's been said Ernest Hemingway frequented this park during his stay in Canada, so you can pull out that random fact as you head here for a sled.

The hill at Trinity Bellwoods may be a beginner run compared to some of the other options on the list, but it's one of the more conveniently-located spots. Come here if you're looking for a few quick runs before a day or evening spent on Queen St.

Gladhurst Park can be found at the southeast corner of Eglinton Flats. It has a fast, steep, curved run to satisfy those looking for a thrilling ride. The entrance is just off of Astoria Avenue with street parking available.

Hoggs Hollow is one of the less daunting hills in Toronto, but it still has a decent gradient that allows you to pick up some speed. There's a metal playground at the base of the hill, but the run-out is long enough to avoid running into it.

While the southeast corner of Eglinton Park is banned, the rest of the hill is open for tobogganers. It's conveniently located a few blocks west of Eglinton station and is one of the better hills in the neighbourhood. The gradient isn't incredibly steep, allowing kids, beginners and those uncertain with the idea of tobogganing to ease into it.