Get to Know a Chef: Paul Boehmer, Boehmer

Paul Boehmer has been around the block. From Scaramouche, to Ultra Supper Club, to The Spoke Club, his lengthy resume suggests he's well-suited to the rigours of running a fine dining restaurant. A closer investigation, however, also reveals a man who loves fishing for pickerel, appreciates the allure of nature, and has even instilled in his children a love of game meat (no small feat).

I chatted with Chef Boehmer between services in his intimidatingly gorgeous Ossington restaurant, and learned that he's taller than expected, lightly tattooed, and has learned many a lesson from his previous employers.

No, it was nothing that I really planned on. My father was from Germany, but he was born in Indonesia, so I grew up on eating great-tasting, spicy foods. My mother learned to cook from my father, so in turn, for me it was just fun, and not something to turn into a serious career.

I was studying in Spain at the time and playing basketball, and I decided I was going to come back and fell into cooking because I needed a job. I met Michael Stadtlander and was hired two weeks later, and completed an apprenticeship there. I didn't study cooking in school; it was hands-on and my interest was already there. Later, I went to Scaramouche, and after that, I was Stadtlander's sous chef at Nekah. 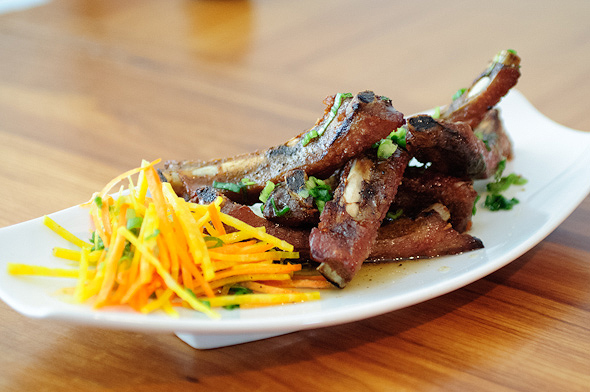 My favourite things to cook are game meats like caribou, and Ontario pickerel. Wild game feeds on the herbs of the land, and it has such an earthy taste. I love cooking everything, and experimenting with different things. I created our signature dish--foie gras with maple-glazed apples and black-currat puree--and I like cooking that, but there's so much more.

At home, my kids can be picky, but they're meat-eaters. They like steaks, but they also like duck, lamb rack, and even venison; they're not afraid of that. My son eats anything, and will eat rabbit like crazy. We're working on fish now.

I try to source as local as possible--locally-farmed trout, I shop at the Food Terminal, and the farmers' market there. Some farmers are starting to come directly to us, like Vicki's Vegetables--she has an amazing variety of heirloom tomatoes.

Norman Hardie has his wines and his field of vegetables, and he'll just come and drop off a whole bunch, and it's like, "Here, do something." You develop a relationship with these people, and they want to share what they have with you, saying "You'll appreciate this."

You've worked in a number of Toronto restaurants and now have your own place. What did you learn that's informed what you're doing here?

I learned what it is to own your business. You do work 16 hours a day, 7 days a week sometimes, when you have to. Believe me, I'd rather not have to do that, but it's what we have to do. I built this place with my partner around the idea of earthiness--the bar is made by the Brothers Dressler from 60-year-old elmwood--and it turned out unbelievable. It's fun to be able to build something on your own.

Back in the '80s, it was liquid lunches and martinis, and people were spending money. Now, you have to pay attention to how you do things, and we've had our ups and downs, but after 2 years, we've really pulled through. We're resurrecting ourselves, and Ossington seems to as well. 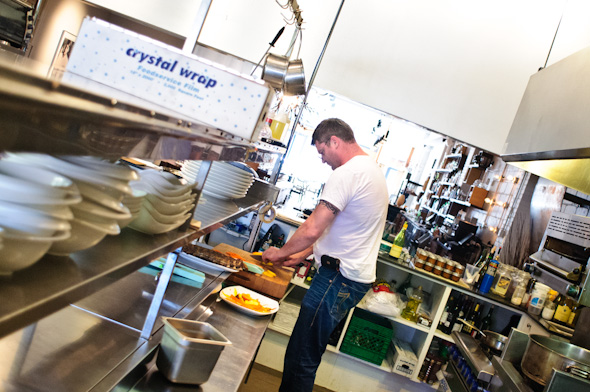 You also launched the short-lived Bohemian Gastropub. What went wrong there and what would you have done differently in hindsight?

Everybody wants to know that. That area, at this point in time, is very difficult. We were sitting in a spot that's north of King, with development taking much longer than we expected. We opened Bohemian Gastropub before it was entirely finished, I didn't want to be spending all my time there--it was meant to be more casual--business wasn't increasing, and we needed to make it a bigger draw. That's when we brought in Moses (McIntee), who makes these incredible cocktails, and with Barchef right across the street.

People really liked it, but it was a bit too stuffy. Now we've taken our general manager from Boehmer and put him there, and given the place more rock 'n' roll. There's great cocktails, and we're putting a pizza oven in there, and we want to keep it simple--Italian appetizers, and proper thin-crust pizzas.

Any plans to launch any other restaurant ventures?

Not at the moment. Maybe later. Our plan right now with Boehmer, is that we're looking to expand into the next room over and incorporate pizzas. We want to open for lunch, and be open 7 days a week. We'd like to give people options--drinks, pizzas, and Boehmer food. Maybe even a game meat pizza, maybe with venison sausage. We have a new chef de cuisine, which has freed up some of my time to step into the dining room. 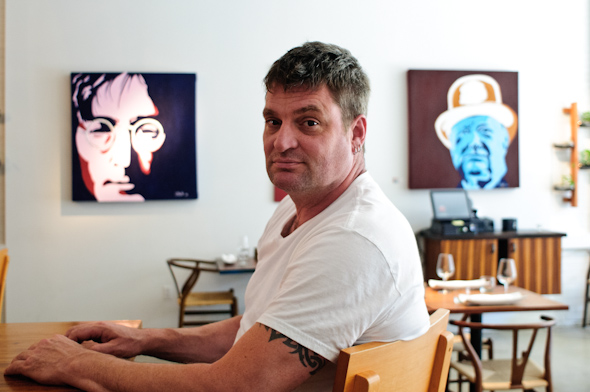 Who was the toughest boss you've had in the restaurant industry to date? Would you ever work for someone else again?

Everyone can probably say they've had some bad bosses. First of all, it's their business, and as an owner, they can run it any way they like. Before, I might've sat around and thought, "they're a pain in the ass," but now I know there's a reason for it. The people I've worked for are tough operators.

When I first started out, chefs feared for their life, but nowadays, people just walk out. It's a tough job, but you need to be disciplined. Personally, I don't think I would work for anyone else again.

I go to Oyster Boy. Adam Calhoun is a good friend of mine and I love oysters. Otherwise, I'll go up to Michael Stadtlander's farm with my kids--they've been going there since they were born. I love getting out of the city, and this summer is all about the cottage. I like to go fishing up in North Bay for pickerel, and in the fall, I'm planning to start hunting.

The fun part is going out and being more in touch with nature, not so much going out to dine in restaurants. When something interesting comes up, I'm excited to go, but I'm also a creature of habit, so I find something I like and I order it. Years ago, I used to go to Splendido and have veal chops every Sunday. They'd ask, "Do you want to try something else?" and I reply, "No." 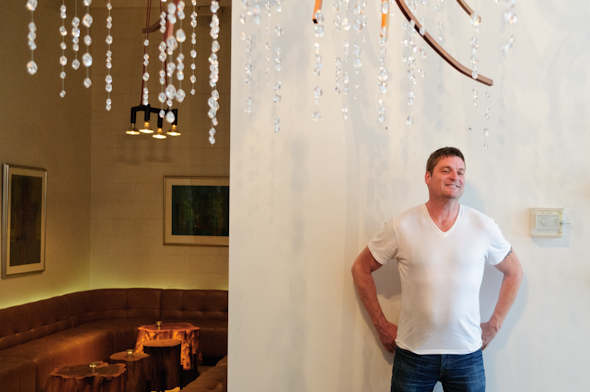 What would people be surprised to find in your fridge? Condiments.

What's one food item you can't live without? My favourite food, that I can't really eat too much of anymore since I've been diagnosed with Type 2 diabetes, is chocolate and churros in Spain.

What's one food trend that needs to end? It would be nice to have food go back to its natural, artisanal state. Everyone's trying to infuse too much into food these days.

For more chef profiles, visit our Toronto Chefs Pinterest Board.