It's not unusual to find pork hearts or beef tongue on Basilio Pesce's menu. The chef (formerly of both the McEwan and O&B empires), says he's constantly driven by new ideas and certainly isn't short of novel approaches to food at his Parkdale restaurant, Porzia. Pesce talks about developing an interest in the profession, keeping his culinary curiosity alive, and working with one very notable ingredient.

What's new at the restaurant?

We started doing a Sunday day service as our next focal point. I find that brunch has a certain connotation to it and people have their own versions of what it is. I just don't want people to come in here thinking it's three eggs any style with your choice of ham, sausage or bacon. We make everything in-house including our yogurt, granola and preserves. We also do all of our baking including savory and sweet breads. We do frittatas, a riff on a carbonara, pork belly ... basically it's the philosophies and ideas of what the restaurant is at night, only Sunday during the day.

Why did you decide to do brunch and not just dinner?

We thought we could add to the day culture of the area. Parkdale is very dynamic in that sense where every hour of the day is something new. I've been hanging out at this restaurant quite extensively for over a year, and you kind of notice certain nuances of the neighbourhood. I've noticed there really isn't a day culture here. You do have small little places that are open, and now that Grand Electric is open [during the day], they kind of add to the whole scene, you know, not just people roaming the street, but people coming down to eat during the day. At night, it's a different story. Once it hits six o'clock, it's total mayhem.

When I first opened the restaurant I was dead against it. I was the first person to stand on my soapbox and say, 'We're not going to do this, this is not what we're about.' But very quickly I realized how wrong I was. Ultimately, we just thought we could provide something great, and that's been our number one motivation. 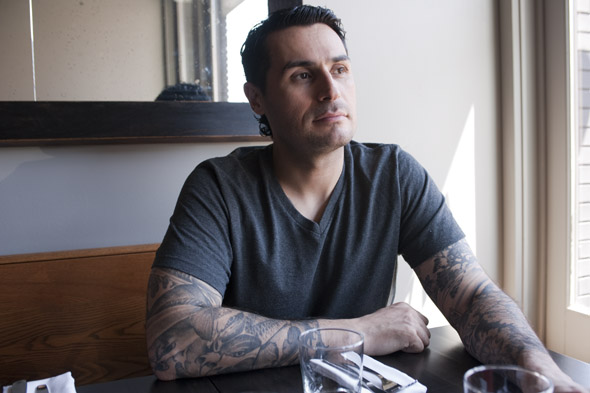 Why set up shop in Parkdale?

I think it's such a great neighbourhood. It seems to be one of the last raw and very real neighbourhoods in the city. Every neighbourhood, regardless of what it was five or six years ago will always kind of end up being something else. I remember Ossington when you just drove through it and you never went anywhere there. Once they had a huge explosion of restaurants, it's turned into the Ossington that everyone knows now.

Parkdale's a little bit of a harder sell because there's such a huge, tight-knit community within the neighbourhood itself; not just with the BIA, but there's a huge resident association as well. Everyone just wants what's best for Parkdale so you'll get a lot of no's before you get a lot of yes's. The neighbourhood is such an eclectic mix, there's such a great energy, and the people here are fantastic. I think the restaurants that are here completely fit. And you have to, because it's almost like they can smell your bullshit from a mile away.

Absolutely not. I think it was my third choice in life that I fell into it by accident. I needed a job, and that's how I think most people fall into their careers or try figure out what it is they like. My first kitchen job was in a Kelsey's. My younger sister was working there and it was just one of those days where three guys in the kitchen never showed up. I just got destroyed the first night, burnt my hand, and stood there like a deer in headlights. But I kept going back. After about a year, I got pretty good and I kind of realized that I liked cooking, but not there. I felt like there had to be more and I decided to go to cooking school. So I went out to the Pacific Institute of Culinary Arts in Vancouver, did really well, and never looked back.

I was very lucky that I grew up in a very food-rich family. My parents are both Italian and for me growing up, some of my early memories are centered around Sunday dinners or some sort of event where there was way too much food. I've always liked to eat and I've always had a very good appetite. I was always the kid who would pick the weirdest thing on the menu. I wondered what rabbit or shark tastes like. Half of it was just to fulfill this curiosity I had about food, the other half was just to freak out my sisters. 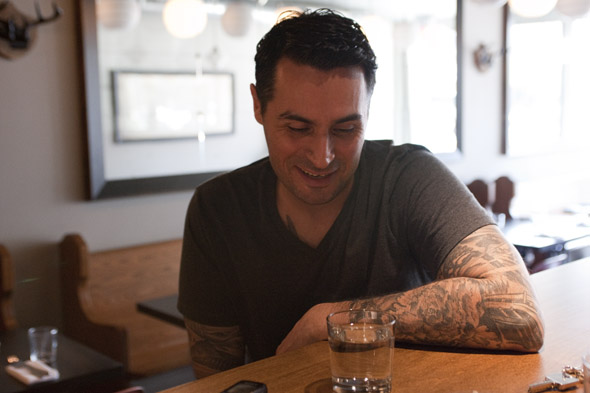 Was culinary school where you really learned to cook?

That's a loaded question. I think doing what we do, you never really learn how to cook. You're always teaching yourself new things. Do I know how to cook? I can probably piece together a breakfast and if you want me to make you a pasta, sure. In terms of learning, I know for myself that you never stop. And that's the one thing I like about dealing with food: it's always something new. Even when you think you know how to do something, it's always different, and you just have to learn how to adapt. And I think that's what makes good cooks or chefs.

You have some pretty adventurous things on your menu. How have you fostered that curiosity as a chef?

I honestly don't think I'm a creative person. I don't think of myself as an artist, and I know that gets thrown around a lot. I just like making good food, and that's what my motivation is. I find that motivation drives you to work with really good ingredients and try to get things to 100% per cent, even if that doesn't exist. I came from a very structured kitchen environment from the jobs I had before, and not that there's anything wrong with it, but just knowing my personality, I like doing different things.

A lot of it is for funny, stupid, and selfish reasons, like if I have to roll out the same pasta for seven straight months, I'm not going to be very happy. We'll run something for two or three days, and we do have staples on the menu, but I find that that the curiosity fuels the menu. I think it's important for the other chefs who work here as well because it gets you constantly thinking about how we can make things better.

We don't have people leaving because we have horse on the menu, we don't have people freaked out because we do bone marrow. The only chicken dish we have is chicken livers. I think we've gotten a very good response with the food that we've put out. We provide something different and I'm not saying that it's so unique that we're redefining the food scene in Toronto, but I think we put out food that we like to eat. We're not fueled by egos, we're fueled by ideas.

What's so great about horse?

I've grown up eating it. My parents are southern Italian, so for me it's not something that's uncommon. The meat's a little sweet, it's super lean, and if you know how to treat it, it's amazing. We've had some sort of dish on the menu with horse in it right from the opening. We've gotten a lot of good feedback and we've only had about one person questioning our intentions. I think if you respect your product and you buy from a very reputable source, that's what I think it comes down to: respect. It has a certain connotation here because it's not something that's common, but if you go to Quebec and Europe it's a different story. I know it's a very touchy subject, but it's delicious...it's so good. 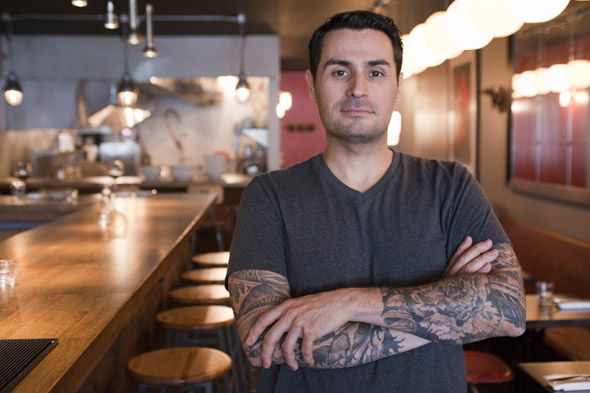 What's your favourite offal to work with?

I like chicken livers and bone marrow a lot. I think those are probably the two that have been very constant on the menu. Chicken livers just taste good as simple as they are. And bone marrow is like an oyster; it's almost the perfect food. You just throw bone marrow in the oven with salt and a little piece of bread and you can't get any better. It's like meat butter.

What's the biggest lesson you've learned as a chef?

You have to be patient. Patience is the best characteristic a chef can have. I taught two semesters at George Brown and my students would always ask for that one piece of advice. If you work hard and you listen and you're willing to learn, then you're going to get rewarded. If you think that you should be given more than what you've worked for, you're just going to crash and burn.

What's next for you?

I want to expand, but I don't know when because we're only three months in. I want to start opening other restaurants that would be very different to this concept. I want to do it as fast as I can because I'm not getting any younger. I have a few ideas of what I want to start working towards, but I need to deal with this first, obviously.

A chef that inspires you? Mark McEwan, Anthony Walsh and Jason Carter

What's one dish you can live without? Bread or pasta

What would people be surprised to find in your fridge? Minigo for my son

What's one food trend that needs to end? It's like fashion; there always needs to be something new coming in.

Read more Toronto chef profiles on our Pinterest board.