Aja Sax is a fixture on the local bartending scene, and one of a number of prominent female cocktail specialists in the city. In the past few years Sax has been behind the bar at the Miller Tavern and the County General and now she is in charge of the bar program at The Emerson, a recent addition to ever-gentrifying Bloordale. We popped into The Emerson before service one afternoon to chat with Aja about her bartending history and her passion for cocktail service.

Are you from Toronto originally?

I am but I grew up in California. I lived there from the age of two until I was a teenager. My parents broke up a couple of years before and I moved here with my Mom when I was 16. I have American citizenship and often think about going back, but my friends are here and life is easy in Toronto. I like it here.

Where did you start bartending?

My first real bartending or serving job was at the Rivoli, which is where I met Dave Mitton. I was working downstairs and Dave was bartending upstairs. Later when Dave opened Czehoski I started working there. I learnt a lot from Dave at Czehoski. He's kinda like the Papa Bear of Toronto bartenders! [Laughs] He is though. I've worked in a bunch of places over the years, including Kalendar on College for a while too. At Kalendar they start you off serving then you graduate to bartending.

Running food definitely helps you be a better bartender. Then I worked at Swan. It wasn't as much about cocktails there, it's more about regulars coming for dinner and the owner is really great with selecting wine. I was serving there then I moved out West for a bit and then when I came back that's when I started at the Drake as a bartender for almost 3 years, which was fun but hard work too. 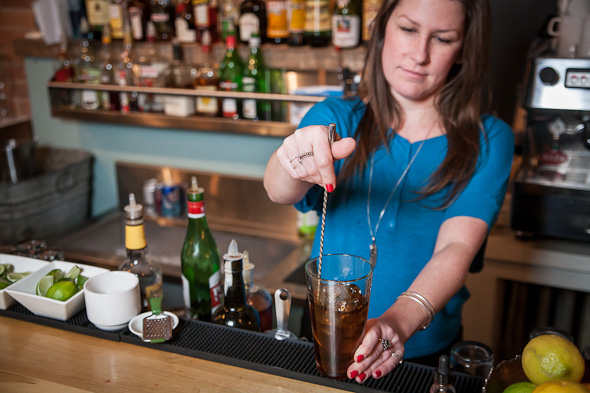 It seems like a lot of prominent Toronto bartenders honed their skills at the Drake.

Well, they've always had a pretty strong cocktail program even though it varies depending who's in charge. Over the course of me being there Christina Kuypers was there for a short period and she changed how it was being approached. She came fresh from BC full of cocktail ideas. It's hard to execute in that building. The volume alone is impressive. I give her a lot of credit for that, and I also give them a lot of credit now.

It's tough when you've got five bars in one building - you've got a lot of staff to train and to keep consistent. It's the same with food but even more so with cocktails — if they're not consistent it defeats the entire purpose. Every single person should be able to have something as simple as the same Mojito.

At The County General you got to showcase your own creations a bit more?

I knew it was management, which is something I felt I was ready to take on but the bar program kind of took over and that was really interesting. I had to come up with six original cocktails seasonally. In the time I was there I think I changed the menu five times, which was incredibly challenging and really interesting, and I was limited to the confines of using bourbon and rum, which is what we were focussing on there. Just in terms of space I didn't want to have every single liqueur and every single vermouth. I really wanted to show what you could do with what you've got.

Is that the same situation at The Emerson?

Yeah, I approach it the same way here. I have quite a few bottles to choose from but really only six or seven liqueurs as modifiers, so you're really relying on homemade ingredients like syrups, bitters and tinctures and I find that really fun. Conversely at the Miller Tavern I was like a kid in a candy shop.

They have a clientÃ¨le base there that really just sits down and asks you to make something, which you don't get in a lot of places. You have to stay on your toes as these guys are coming in three times a week and asking for four drinks while they're there. So making twelve drinks a week for one guest, you obviously want to keep it fresh. The first drink of the third visit can be the same as the last drink of the first because they don't necessarily remember that one! [Laughs]. 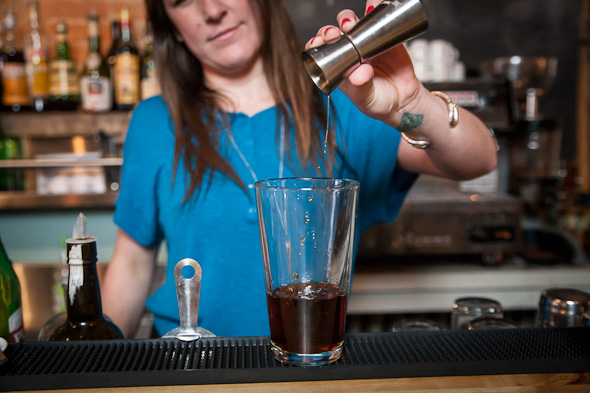 What qualities would you say you needed to be a great bartender?

So often people have one skill set but not across the board. My strength is speed. I don't know as much as people like Sandy De Almeida, Dave Mitton or Christina Kuypers. I don't have that breadth of knowledge but my speed is why I'm good on a bar like this, which is a ton of service and eleven seats at the bar. It gets packed to the gills so you need to be fast and consistent.

Other people are far more charming than I am [Laughs]. You have to know your strengths and play to them and that's what makes finding a job so interesting and challenging. You spend so much of your time at a place. I'm here from between 9 and 13 hours a shift so I've gotta like what I'm doing and where I'm doing it. There are bartenders who have no interest in food so they shouldn't be working at a restaurant. I find myself more stimulated working in a restaurant-bar than just a bar. I do need to work with beer and wine and the whole nine yards.

Is The Emerson a restaurant first and bar second?

Well, the focus is on the food. Scott, one of the owners, used to work in Leslieville at Gio Rana's Really Really Nice Restaurant and Conor has worked with him over the years. They've worked in both fine-dining and more casual environments and they really want people to have a good time here. We get to do what we love within the confines of what their vision is. The food is very accessible but they are approaching it really beautifully. You should see these guys prep!

Your drinks at a restaurant, as opposed to a cocktail bar, have to be more accessible to more people and something they can move onto wine or beer during the meal. There's no snobbery or pretension here. I do love that people are thinking about their drinks more these days but if people want a vodka soda I'm happy to make that. It's your money and your taste. Ultimately it's about caring about what you're doing and not cutting corners. You can tell when your server wants you to have a great time or when your bartender wants you to enjoy your cocktail. No matter what your industry you should care about what you're doing.

Vodka-soda or gin and tonic? Neither! Gin and soda.

Favourite shot? Jameson or if it's a shooter an Irish Car Bomb. I like really terrible drinks. [Laughs] It's not only politically incorrect but it's disgusting.

Favourite cocktail? PiÃ±a Colada. It's like pizza - even a really terrible one is still good!

Olives or a twist? Twist. I hate olives!