Susur Lee might just be one of Toronto's most recognizable chefs thanks to major televised cook-offs (Iron Chef America and Top Chef, to name just a couple) and a slew of restaurants in Singapore and Toronto. I sat down with Lee at Luckee, his newly opened dim sum spot in the Soho Metropolitan Hotel, to get his take on Toronto's dining scene and how he keeps his concepts fresh with a traditional bent.

No. When I was a kid I was all about hanging out with the guys. I'd party, drink, work and have fun. I learned on the job in Hong Kong, where I grew up. It was a friend who said "Hey, let's hang out, there's a job in a hotel, you want to come try it out?" I said sure. It was when I walked into the kitchen that I said "Hey, this is me". I like the tools, I like the kinves, all those things. It just came very natural.

What's the most valuable lesson you've learned working as a chef?

Discipline. I'm very old-school. I remember working in the kitchen, where I first started. There are all these older chefs - I'm talking about some of them in their late '60s, still cooking - and I looked at them like my father or grandfather. They'd say "Sure, you go party. But tomorrow you come in on time, and if you're late, you stay later and we'll give you more work." They have that kind of kung-fu master mentality. You pay your dues, that's the bottom line. I think discipline has helped me over and over again when perfecting something and doing it right.

How do you keep pushing yourself creatively?

People, the next generation, my sons and also my wife (she's very creative), curiosity, travelling, culture - those are the things that really make me excited. To learn something new - for example, I was in China and I saw a chef take a chili, cut both ends and start rubbing it so that all the seeds fall out, I said "Oh my god, I'm like a student again, I've never seen that kind of technique before." It makes me think of different ways I can use that chili; stuffing it, frying it, cutting it ... all different ways of creating.

How do you think restaurant culture in Toronto has changed throughout your career?

Huge. I think young chefs are really driven and there are more immigrants from different cultures, and people are more accepting of different flavours from cultures, and even trying authentic flavours. So I think Torontonians are now very open-minded. 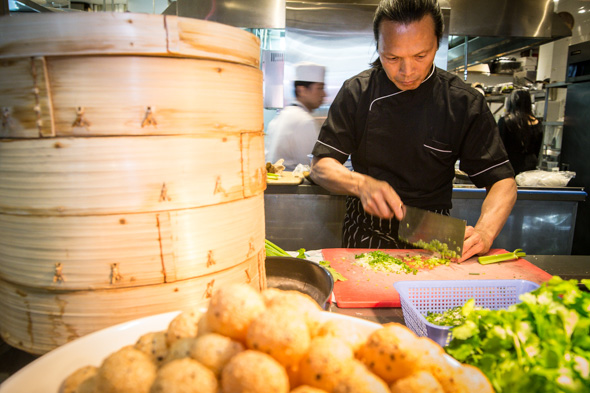 How does Toronto's dining scene compare to other international cities?

I think Toronto and Canada is very different from the U.S. and Asia. Toronto is very specific - you have something very traditional next to something very new, and then there's a middle ground between the the two. It's because the audience is very open-minded and it makes our city very special.

What's the most rewarding thing for you to cook these days?

I've created new dishes here for Luckee. But there's one dish, the Shanghaiese ham, that's very traditional, but with a spin, only even the spin I put on it is very traditional too - it's a combination of old and old. I'm excited about this dish because you help yourself (to condiments), make it your own by adding a little of this and a little of that. There's a choice and freedom in this food - it's not just the food in front of you that you're getting, and it lets people engage and eat with their hands. I think it's very graceful but very modern at the same time.

I get up early, I'm not a late person. I make lists before I go to bed. I'm not a computer guy, so I write everything down and plan my day: dealing with different restaurants, chefs, managers and helping them to create and deliver. Then there's business, press and engaging with the staff, letting them know I'm still running the show. My days are quite packed. I need a good foundation so breakfast is very important to me, and so is fitting in an hour and a half for yoga.

What are some of your current favourite places to eat in Toronto?

I always come back to what I grew up with, Chinese is my comfort food. I go to King's
Noodle a lot. I've been eating here at Luckee a lot lately ... My wife is also a good cook, she saves me food.

What's next for you as a chef, restaurateur or TV personality?

Restaurateur and chef is the No. 1 thing because it doesn't matter if you're on TV - if your food is not good then you're not a chef. The bottom line is, if you run a restaurant, the food has got to be good. I'm very hands-on, I still cook with my chefs and I create recipes. I have very good people to run the daily restaurant so I'm always really focused on the kitchen.

I've noticed some paper in the windows at Lee on King West, what's happening there?

I'm always upgrading. I always want to create something different. My wife is doing the interior again and we'll be opening in a month's time ... I'm not telling what's inside, check back in month. 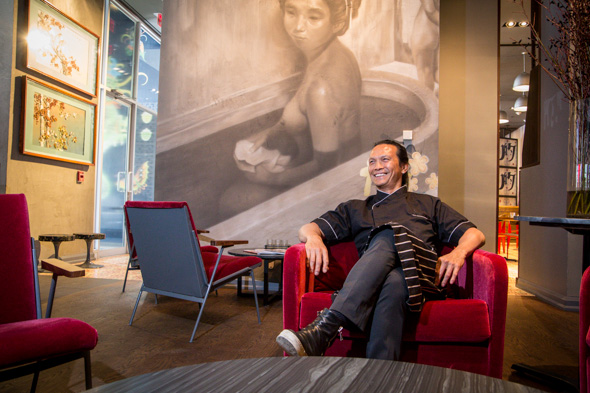 A chef that inspires you? Andrew Tijoe. Not a chef, but my partner in Singapore - he educated me about the history of Chinese food.

What's one dish you can't live without? I could do without the cheque. :)

What chef would you most like to collaborate with? Jean Georges